Has anyone else noticed some glaring inaccuracies in some mountain area "footpath" mapping. (In particular, on OS Explorer series)?

With access to satellite imagery, it's a simple matter to compare "actual" path-tracks that can be seen on satellite images with "mapped" paths as shown on mapping for the same area.

You would be surprised at just how far away from reality some of the "mapped" paths actually are. - (Sometimes shown as going directly over rocky outcrops etc.)

I appreciate that accuracy can only be to a certain level at the scales involved, but on OS Explorer mapping, where green hashed lines represent "footpaths", in many cases they seem to be no more than random lines that bear no relationship at all to actual paths on the ground.

In fact the less obvious black dotted "path" lines are, generally speaking, more accurately plotted. (As may be seen in the example below). If anything, those small black dotted lines should be made more obvious than the prominent green lines! 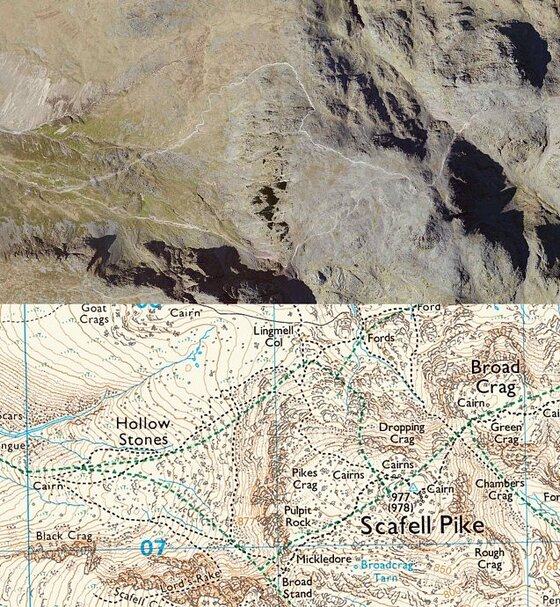 Actually there not inaccurate at all...

Green lines denoting public rights of way are taken from the 'definite map'(*) data held by highway authorities. This is the legal record, of the existence of a legal right for the pubic to use the 'ways' recorded on it. This however does not mean that a path actually exists, only that the right to use one does!

For example a path that has been subject to the effect of natural erosion will only be removed from the definitive map (unless diverted or extinguished by legal order) if no part of it remains, it is however likely that a traffic regulation order may be imposed prohibiting it's use (making use a criminal offence), if it is considered dangerous to do so. This scenario is ever common on the Isle of Wight and Dorset coasts - see this footpath shown just above the beach which used to be part of the SWCP https://binged.it/2bXnFyH.

However this does not apply in Scotland where rights of way don't exist, or to inner London boroughs who haven't been required to create definitive maps.

As it says in the legend (https://www.ordnancesurvey.co.uk/docs/legends/25k-raster-legend.pdf).

Thanks for your reply and input, but with regard to the intended usage of these maps, I think we may be straying into the area of semantics if we only consider legal records, definitive maps, and such statements as: - QUOTE Public rights of way shown on this map have been taken from local authority definitive maps and later amendments. Rights of way are liable to change and may not be clearly defined on the ground, Please check with the relevant local authority for the latest information. The representation on this map of any other road, track or path is no evidence of the existence of a right of way. UNQUOTE

I readily agree that these draw attention to the legal status and origins of data for public rights of way as represented on OS maps, and that "rights of way may not be clearly defined on the ground", but they don't particularly draw one's attention to the fact that what is actually shown on the map may be inaccurate, in context of the map's intended use - i.e. in connection with outdoor activities.

Consider the following statement too, (quoted verbatim), which is writ large as the first paragraph of information on the inside of the card cover of every OS Explorer map: - QUOTE Welcome to your map; your adventure starts here! Whatever you're looking to do, this OS Explorer map will give you the outstanding level of detail you'd expect from OS. With clear markings of roads, public rights of way, paths and tracks, cycle ways and areas of open access land, alongside our familiar tourist information, you get all the detail you need to make the most of the Great British outdoors. UNQUOTE

With particular reference to "this OS Explorer map will give you the outstanding level of detail you'd expect from OS", and, "you get all the detail you need to make the most of the Great British outdoors", I would suggest that it is more important when one is actually out in the Great British outdoors, that "the outstanding level of detail you'd expect" on a map accurately represents paths on the ground, (whether or not those paths also happen to be public rights of way), rather than accurately representing information taken from a "definitive map" that may have been plotted several/many years previously.

As an end user, who might be following, or trying to find a path on a mountainside in dense mist, at that particular moment in time it doesn't matter to me where the information shown on a map originated from - but the accuracy of that information in relation to what will be seen on the ground does. When a path is shown on a map specifically created for outdoor recreational use, and where that shown path might lead me over a rocky outcrop/crag, and yet in reality, no such path actually exists at that location on the ground, then as far as I'm concerned, that path is represented inaccurately.

With that sentiment alone in mind, I would agree to disagree, and I stick with the premise of my original post.

As you have identified the black dashed lines represent what is atualy there on the ground, where as the green ones only represent rights that exist in principle.

If you don't want to fall of the precipice then follow the black ones, but don't be surprised if Farmer Giles runs across the field yelling "get off my land"!

Interesting discussion. I have often wondered 'where has the path gone ?' I used to think it was just a navigation malfunction on my part , but as my map reading skills have improved over the years less so. I have a couple of Harvey Superwalker maps, which I like using but they have a similar problem as discussed here with the OS maps. The most useful addition to a map (in my view) are the guides from this website , with text , maps and photographs of the route. An example from the last walk I did which started at Mardale Head. The footpath up the side of the Rigg - 'Heading for The Rigg which juts out into the water, bear left at a wall corner to climb steeply through the bracken'. Without that I would have marched past that turn (which isn't shown on the OS map)

Even if one accepts that the green hashed lines on OS Explorer maps represent rights of way, as per information obtained from local authority held "definitive maps", and not, necessarily, paths that can be seen on the ground, there are still some "interesting" changes to be seen (discrepancies?) between revisions of maps.

For example, with regards to these two images - (once again, all copyright rights attributed as appropriate to Ordnance Survey Ltd.), - both showing the same area, and both obtained from the same source: - 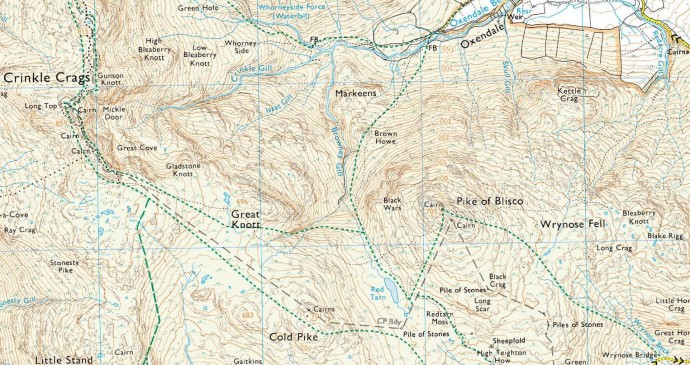 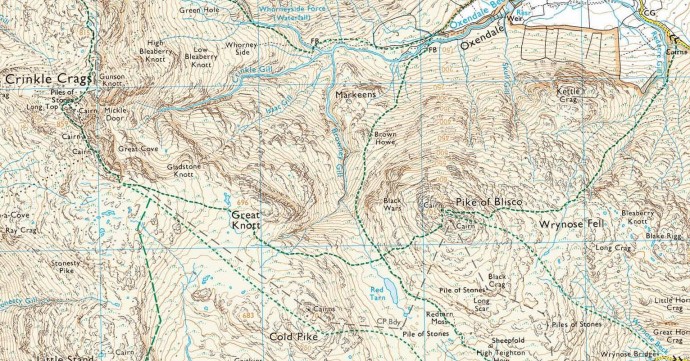 The first image is from earlier this year (mid-March), and the second one is the currently displayed version. Note the many marked differences between the positioning of green dotted/hashed lines indicating rights of way. Those shown in the second image follow any shown black dotted lines, (which represent paths - but not rights of way), much more closely.

Therefore, one can only conclude that either: -

I'd be surprised if it were any of the first two, and strongly suspect it will be the third.

If I am right (or indeed even if I'm wrong), then I still go back to my original premise that, (right of way or no right of way), maps specifically produced for outdoor pursuits usage should show paths/tracks which actually exist on the ground, (since accurately being able to follow those paths is a primary reason why people would be buying/using such maps), much more prominently than rights of way, which may not actually exist on the ground.

Earlier this year I walked up from Wrynose Pass, and the footpath (green dashed line) from Red tarn to Pike O Blisco, is not there. The other footpath - crossroad between Great Knott and Brown Howe up to Pike O Blisco is there. Once you have walked an area you know this info, but in this example the map was inaccurate (in my view) when walking up from Wrynose Pass. You can always go 'off piste' if you can see your destination, but that can can be hard work, and maybe not environmentally friendly....erosion , ground nesting birds etc..