My modus operandi of recent years has been to carry a general area map covering a large section of the Lake District, (which more often than not, never comes out of the rucksack), along with a computer print out, showing the area specific mapping of the intended walk of the day. I admit that I have recently succumbed to the charms of a GPS unit for a back-up, and its ability to upload/download GPX tracks etc. - but after a lifetime of using them, I wouldn't feel dressed if I were to venture out onto the hills without a paper map and a proper compass!.

However, there are some less obvious choices that are worth considering in addition to the "big 3".

I was recently made aware of "The AA Walker's Map 2 - Central Lake District". This map offers a very useful addition to the map users arsenal, as the actual mapping is Ordnance Survey 1:25000 scale, and appears to be identical to that used on the OS Explorer 1:25000 range.

Where this map scores highly, is that it covers the vast majority of the Lake District - from Buttermere Village in the west, to Windermere in the east, southern shores of Coniston Water in the south, and Bassenthwaite Village in the north, - all on the one map! (It is exactly the same size as an OS Explorer map, both when fully open and when folded).

It's a double sided map, and the areas within the green lines on this image show its coverage: - 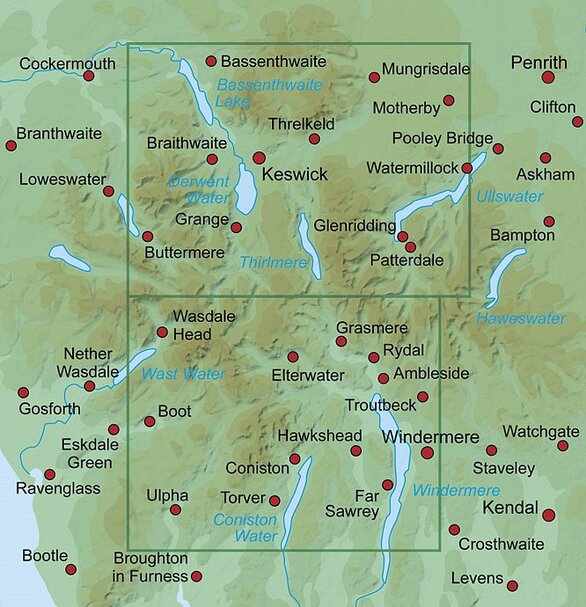 The map is specified as being published in 2012 - which might be off-putting to those who, like me, always strive to have the most up-to-date-mapping to hand. However, having just purchased a copy, (via a seller on that well known online retail site going by the name of the world's largest river

), I can confirm that my copy states "Reprinted with amendments October 2016.

In fact, so far, I have been unable to find any discrepancy between this paper map, and Bing Maps current online rendition of OS 1:25000 scale mapping, or indeed, the mapping on my latest (2016 editions) OS Explorer paper copies. Unfortunately, it doesn't have the mobile download bonus - but those who already have the OS Explorers will probably have the area covered anyway.

Another mapping option, which I'd never heard of until early last year, is produced by a company named "Yellow Publications". -They offer a selection of map ranges, one of which is entitled "Around and About". That series of maps covers many areas within the UK, but of special interest is the fact that much of the Lake District is covered.

These "Round and About" maps also utilise OS mapping, and are identical in all respects to Ordnance Survey's own 1:25000 scale mapping - with one big difference! They have been "upscaled" to 1:16000 scale. (Ideal for spectacle users like me, as everything is that much bigger!). They are made from a laminated paper to resist water damage, and each map covers one specific "walking area", (e.g. Langdale area, Helvellyn area, Blencathra area, etc. etc.), with an average area coverage of 7 x 5km on each side (7 x 10km in total). They are incredibly easy to use, even in a howling gale, and they fold up quickly and easily to fit into a shirt or trouser pocket with no trouble at all.

Since discovering them, I've used them on almost every walk I've done over the last eighteen months or so. They've become my go-to map of choice when I know that my walk will be in a chosen specific area. I really can't fault them, and seldom now have the need to print out my own paper map of an intended Lakeland walk.

I would hasten to add that I have no allegiance whatsoever to any of the companies/map-makers mentioned, and am simply posting this information in hopes that others might find it useful.

Thanks for the heads up on the change from Superwalker to Superwalker XT. I've updated our maps page, and also added their Ultramap range (same four areas at 1:40K so as to be more easily pocketable).

Just in case it looks odd, (as there is now an "edited" note at the bottom), I've just edited my initial post as I spotted that I'd originally made a typo, and have now changed it. (I'd referred to the AA map as being equivalent to OS Explorer 1:2500 scale when it should obviously have been 1:25000scale.

I'd also mention, with regards to your adding the Harvey Ultramap XT40 details on your What Maps page, I have those maps, along with the Harvey Superwalker XT25's - (I'm a bit of a maps geek!), and I can highly recommend them - certainly as back-up maps.

For their scale, (1:40,000), the Ultramaps have very clear mapping and easy to read text. - Like the larger XT25's they are made entirely from some kind of plastic film. They are incredibly tough, and 100% water proof! And, folding down to approx. 75mm x 150mm they are without doubt amongst the most pocketable of any maps out there.

I solely use paper maps and any addition to the variety of mapping options available is very welcome. I like the look of the Yellow Publications mapping - small, relatively cheap, large scale and over a concise area, however I'd be wary of solely relying on these smaller maps if hiking on the edges an unfamiliar area without having a fuller map of the area in my backpack - if the user wanders 'off piste' without backup??

I can also recommend https://www.aqua3.com which gives you a huge variety of mapping options to customise/personalise/laminate your maps including any non-OS paper ones you already own.

I have no affiliation with Aqua3 maps other than being a satisfied customer.