Time to speak out again

Here we go again, it looks like the Lake District National Park Authority needs another reminder that they should be looking at ways to protect the the Lake District landscape, rather than ways to make even more money out of it !

I will be making an effort to be there, anybody else?

It is well and good protesting about each of these ridiculous proposals as they come along - but there will always be another one, and then another one - ad-infinitum. Unfortunately though, as things stand, there doesn't appear to be any readily available alternative, to get one's own individual voice heard.

However, In my humble opinion, the efforts of organisations such as Friends of The Lake District would be better served in bringing about the swift removal from their extremely well salaried positions, of those individuals who have responsibility for preserving and enhancing the LDNP, but who presently seem to be more interested in promoting every tin-pot private business venture that rears its head - instead of putting the (legally obligated) Sandford Principle firmly at the top of the list of parameters that have to be adhered to.

The real problem that faces the Lake District National Park is that those who run it - i.e. Richard Leafe, (LDNPA Chief Executive Officer), and his ilk, seem patently unable to grasp the fundamental concept that the LDNP is a finite resource that is reliant upon its inherent qualities for its ongoing attraction. They constantly spout on about the need for growth and diversity of tourism, when at certain times of year, the area is already pretty much at maximum tourism capacity.

If Lake District tourism were declining at a rate of knots, then a drive to revitalise and diversify it might be in order. - But tourism is not declining; it is increasing year on year - without any need for theme park attractions such as zip-wires and cable-cars. And soon enough, that state of affairs alone will bring its own problems!

The vast majority of visitors go there because they want to experience it for what it already is, - an area of outstanding beauty! - An area with a plentiful social history, and abundant scope for outdoor activities that are in harmony with the landscape, and which can be participated in without having to change the physical infrastructure.

Sustained or steady growth, (of anything that has finite resource), is a physical impossibility, and pursuing it leads only to faster depletion of the resource that is being affected by it. It is an example of an exponential function. - These are facts, and the laws of simple arithmetic cannot be legitimately manipulated to make it become a possibility! - Two sayings come to mind: - "You can't fit a quart into a pint pot" and "Don't kill the goose that lays the golden egg" !!!!!

People who support never ending "growth" would do well to watch the video entitled "The Most IMPORTANT Video You'll Ever See FULL LECTURE - by Dr. Al Bartlett" - ( https://www.youtube.com/watch?v=DZCm2QQZVYk ) The principles which are very eloquently explained in that, albeit now sixteen year old lecture, apply to anything where "growth" is being discussed - be that population growth, use of raw materials, quality of a commodity, increasing visitor numbers, or whatever! - It should be mandatory viewing for all, and perhaps mandatory viewing on a weekly basis for politicians and business people!!!! I could go on . . . . .

One almost gets the feeling that certain parts of the LDNPA think that perhaps they need to be seen to be doing or promoting things, attracting more and a wider range of visitors to justify their existence, rather than quietly working away steadily to preserve what they've already got.

And the video illustrates how quickly finite resources can be used up by just steady growth, for anyone not wanting to go through the whole things I'd suggest going to the bit about the population of Boulder City at 17.50 & think Lake District visitors instead.

Just seen this, from Zip-Off Lakes Watch, on the LDNPA's refusal to disclose the details of the potential Whinlatter gondola: - 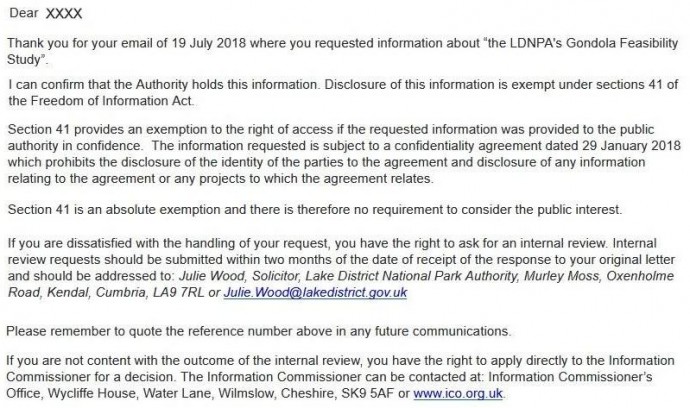 It is absolutely scandalous, that the LDNPA, who's remit is supposed to be for the protection and enhancement of the Lake District National Park, would use section 41 of the Freedom of Information Act, which provides for exemption to the right of access for requested information on the basis that those details are subject to a confidentiality agreement, to withhold that information from the public domain.

This only goes to show that the LDNPA really have lost the plot! They clearly seem to think that they can act autonomously of any legal requirement to uphold the Sandford Principle, and are now withholding information that, contrary to their claims, - most definitely does need to consider public interest!

It really is time to be demanding that officials within the LDNPA organisation who support business ventures over the Sandford Principle, are removed from their positions.