The promise of fine weather, along with much less wind than we've had of late, saw me heading back to Great Langdale for another walk. This time I'd decided to do a "Mickleden Round", taking in some of my favourite fells, and reacquainting myself with a couple of tops that I hadn't visited in several years.

Starting from the National Trust (Stickle Ghyll) car park, I took the path up to Stickle Tarn, then scrambling up Jack's Rake to gain Pavey Ark's summit. From there, onwards to Thunacar Knott, and then High Raise, followed by quite a lengthy "off-piste" descent to a small unnamed tarn at Stake Pass, marking the beginning of the ascents of Mansey Pike, Black Crags, and Rossett Pike.

From Rossett Pike, it was a short stroll to Angle Tarn, and then onwards in the direction of Esk Hause, before bearing off up to Ore Gap. From there, I scrambled upwards over rocky terrain to gain the ridge at Bowfell's north summit - which gives spectacular views across to the Langdale Pikes and is also a superb vantage point for the awe-inspiring "Great Slab".

Bowfell summit was my final peak of the day, before descending to Three Tarns Col, and then down The Band to Stool End Farm. A leisurely stroll along the footpath between the Old Dungeon Ghyll Hotel and the Stickle Ghyll car park completed the walk. Another great day in The Lakes!

The Langdale Pikes, as seen when approaching Great Langdale from Chapel Stile: - 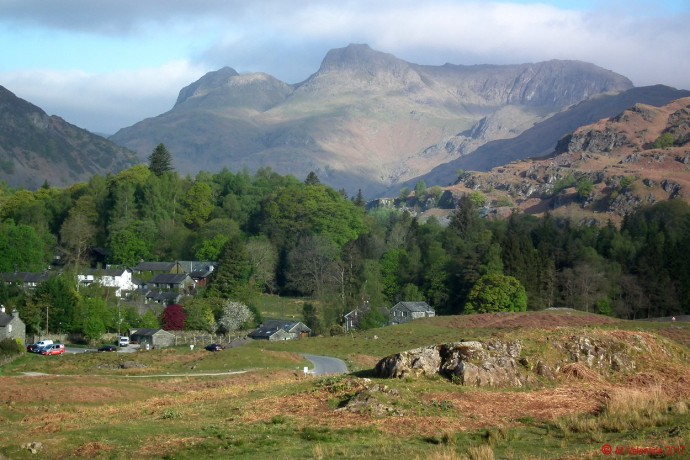 Looking up Stickle Ghyll - Tarn Crag on horizon at the right, and Harrison Stickle at left - (hiding behind the tree!). The main Stickle Ghyll waterfall would normally be quite prominent in this view, but with little rain for several weeks, it had been reduced to not much more than a trickle: - 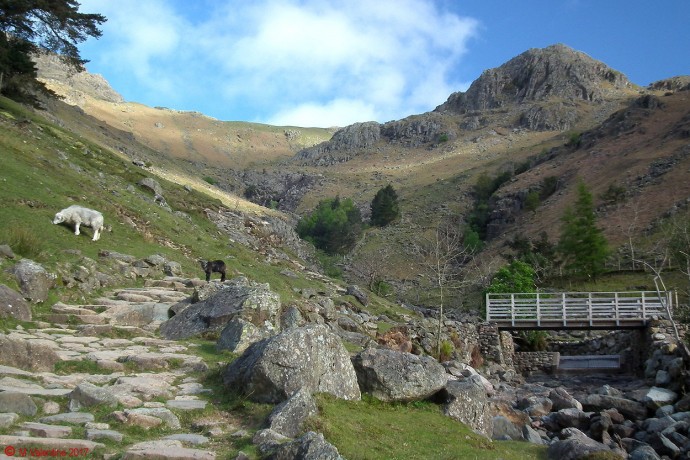 Stickle Tarn, with Pavey Ark beyond. To set foot on this group of rocks in the tarn would generally involve getting very wet! - But once again, evidence of less than average rainfall can be deduced from the low water level: - 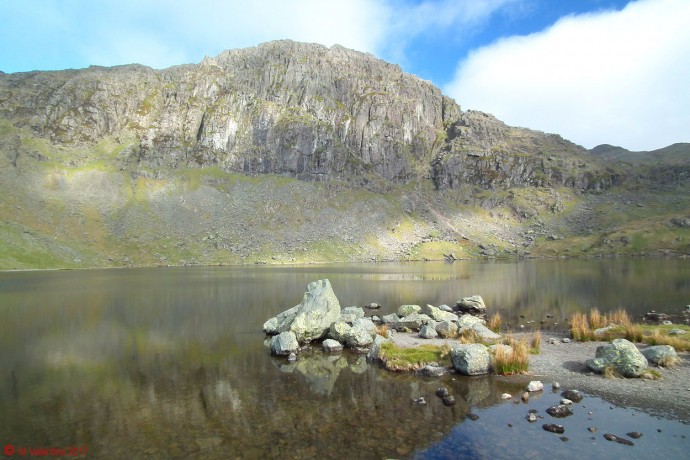 Looking up the Pavey Ark crag-face to the first section of Jack's Rake: - 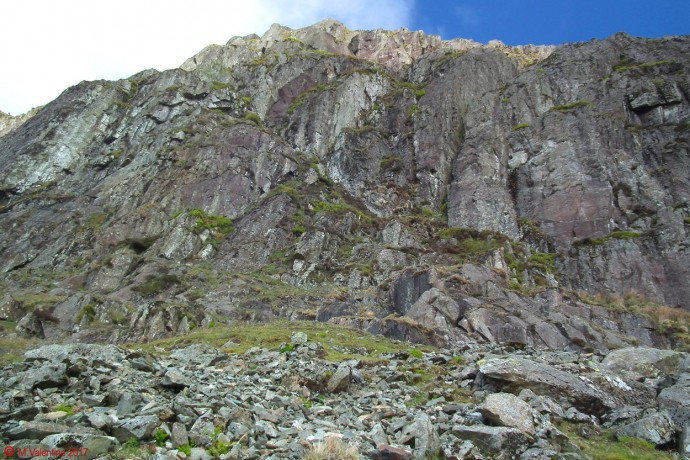 Looking down to Stickle Tarn from just above the first Ash tree on Jack's Rake: - 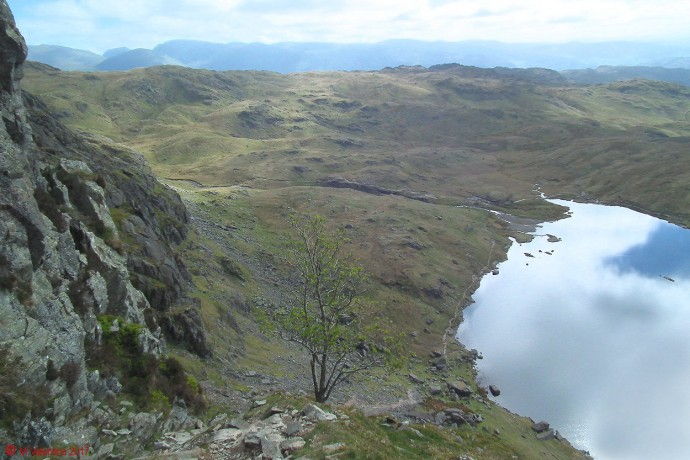 A better climber than me! This photo doesn't do any justice to the angle of the shot - or the sheep's agility. The ledge it is standing on was very small, located some 20 vertiginous metres higher up the crag-face well above Jack's Rake: - 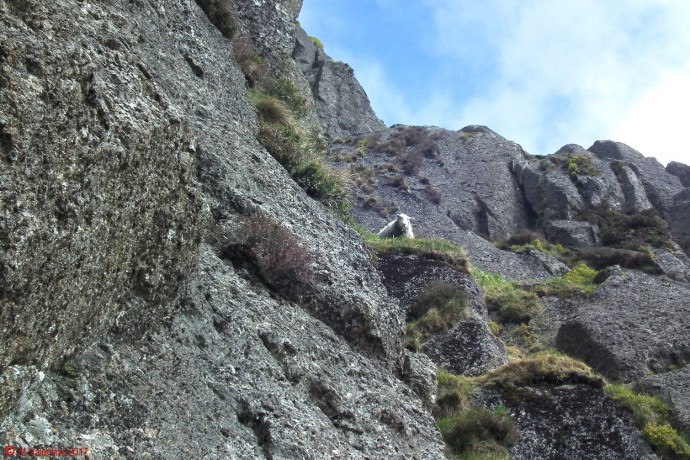 The huge "finger-like" chockstone, which has to be negotiated on the scramble up Jack's Rake: - 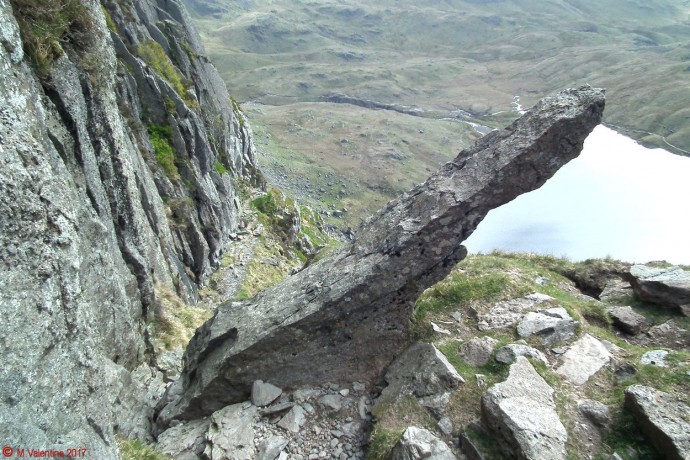 Looking up to the "Little Matterhorn", which marks the end of the Jack's Rake scramble: - 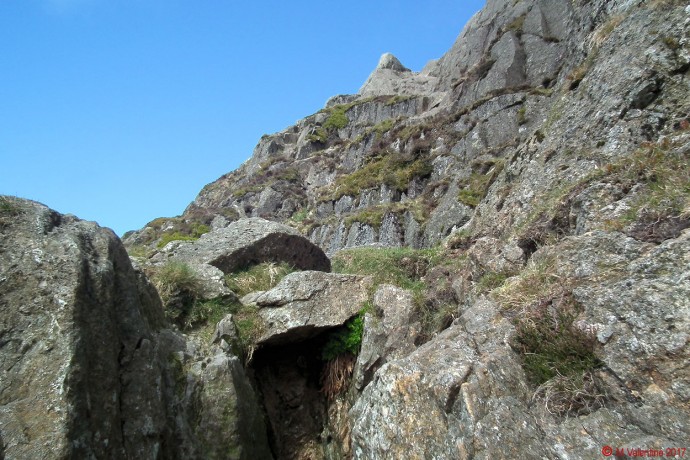 Looking down to Stickle Tarn from the exit slabs area at the top of Jack's Rake: - 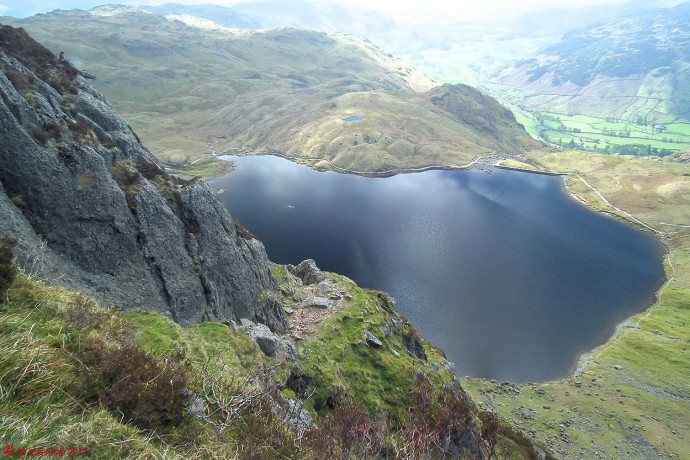 The Little Matterhorn seen from behind, with Stickle Tarn peeping out to its right, far below: - 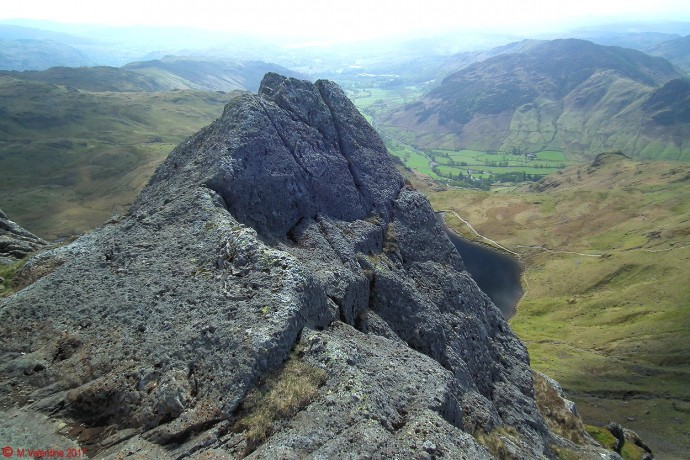 The teetering boulder. - A huge rock, weighing several tons, which is perched precariously near the top of Pavey Ark crag-face. The boulder is very conspicuous when walking across from Pavey Ark to Harrison Stickle, but has to be sought out when at much closer quarters: - 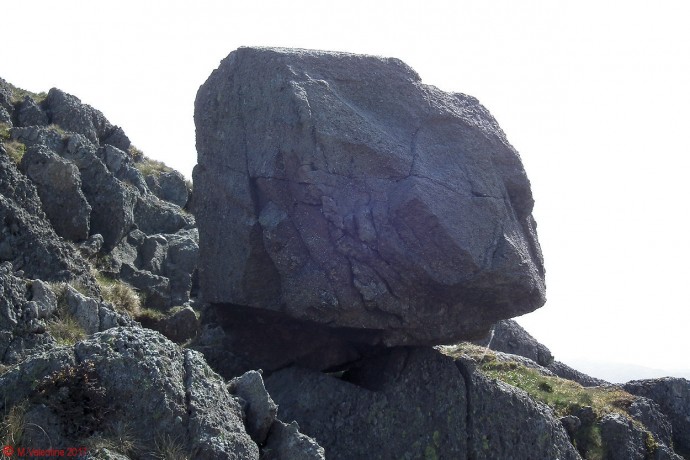 Harrison Stickle, seen from the other side of the teetering boulder: - 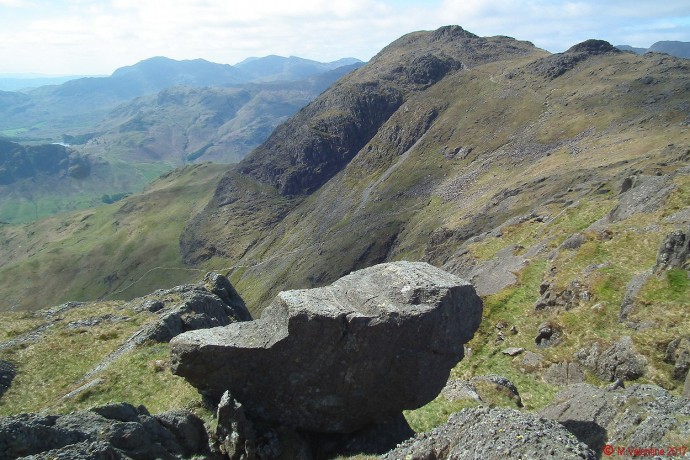 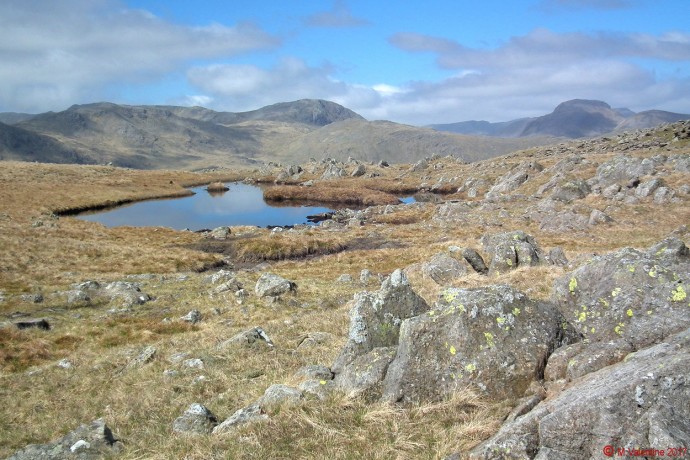 The "sugarloaf" summit of Pike O'stickle, with Crinkle Crags on the horizon beyond. (As seen from Thunacar Knott): - 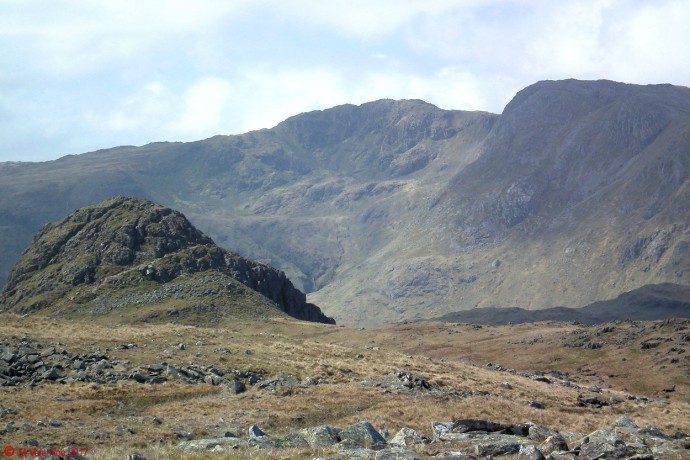 A close-up view of Bowfell from Thunacar Knott: - 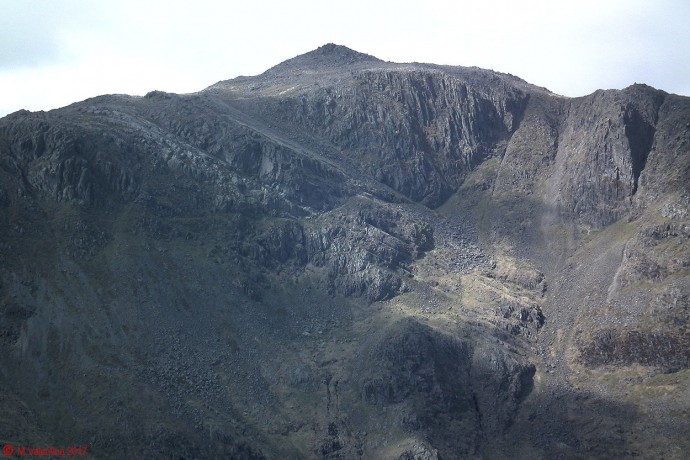 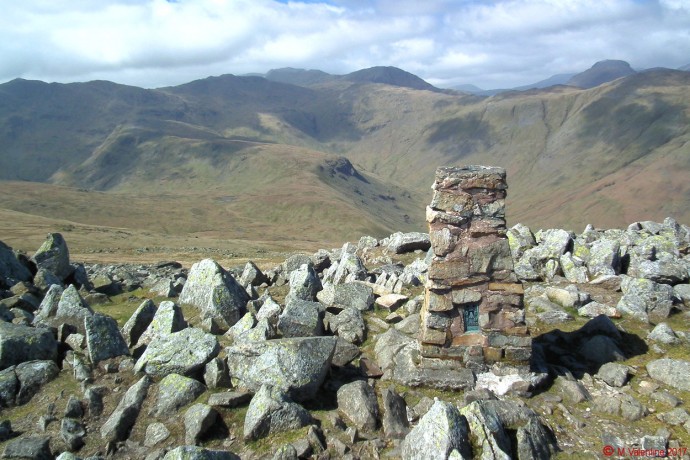 Looking northwards from High Raise, with Skiddaw prominent on the horizon: - 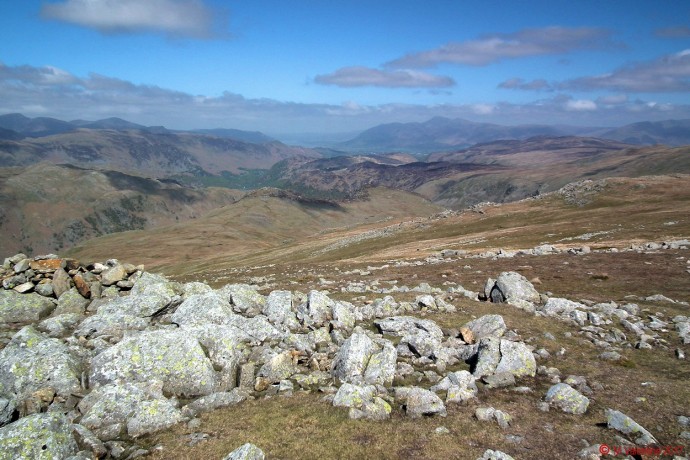 Pike O'stickle and Mickleden Valley, as seen from the Black Crags area of the ridge up to Rossett Pike: - 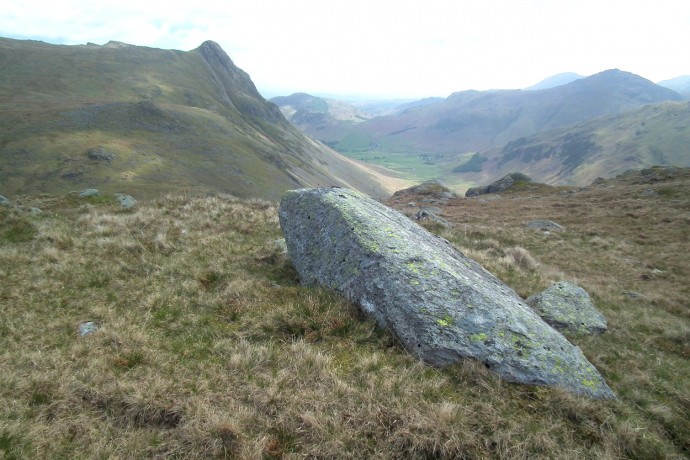 Looking back across Angle Tarn to Rossett Pike, with the Langdale Pikes in the distance: - 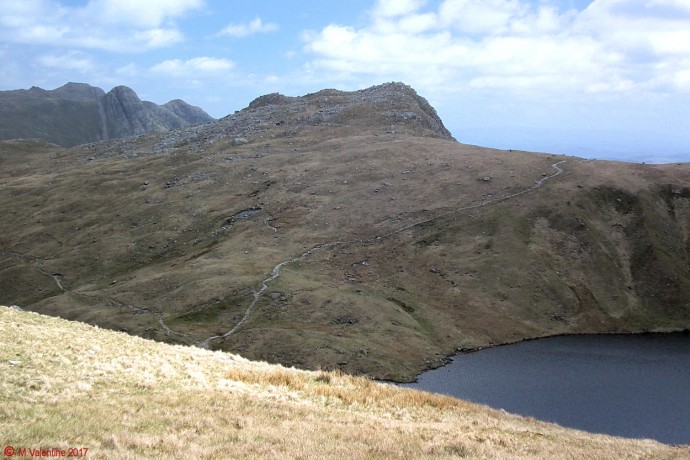 Esk Pike, Great End, and Great Gable, seen from the northern flanks of Bowfell after the ascent to Ore Gap: - 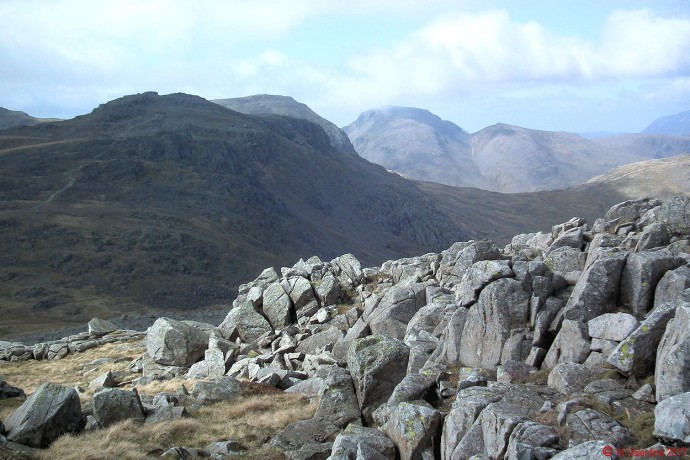 Bowfell's "Great Slab", with The Band falling away in middle distance, and Langdale valley beyond: - 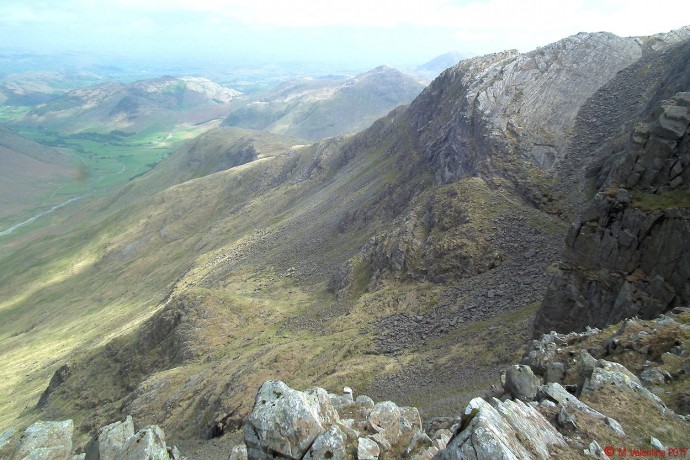 A close-up of the Great Slab: - 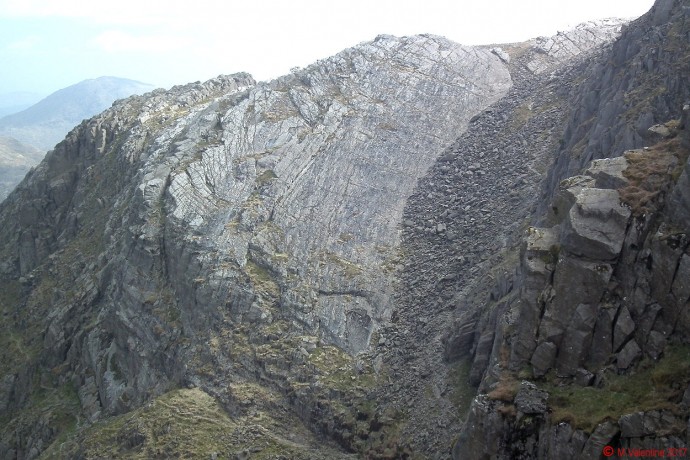 The Climber's Traverse, which leads off from The Band, and arguably, when combined with the Great Slab, one of the very best ways of achieving Bowfell's summit: - 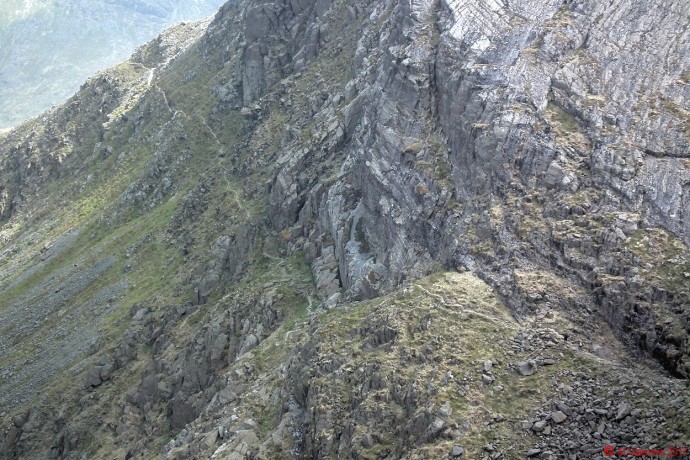 The Scafell's, with a few wisps of misty cloud just touching the summits. (As seen from Bowfell summit): - 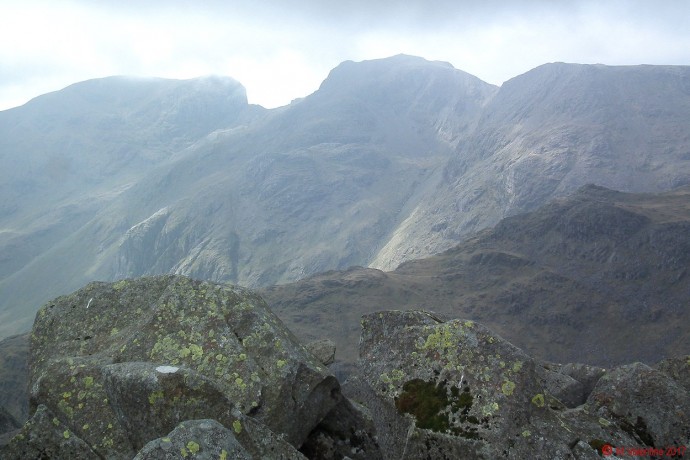 Looking down the long descent of The Band, with the Langdale Pikes beyond: - 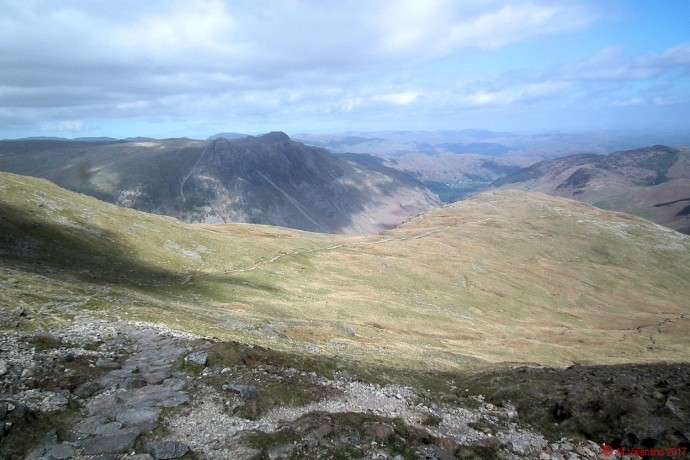 Pike of Blisco as seen from Earing Crag area of The Band: - 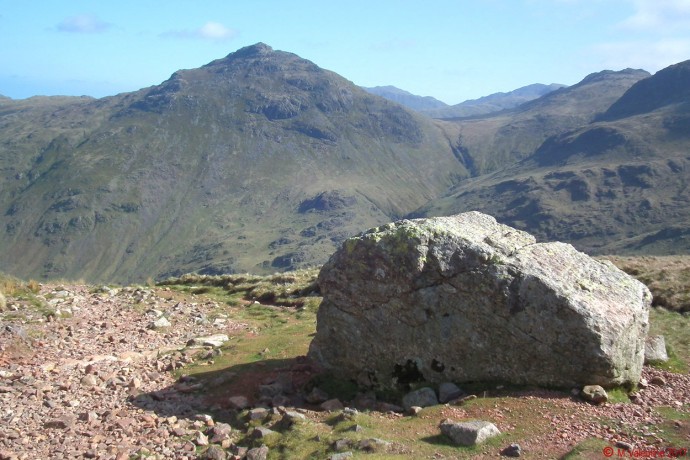 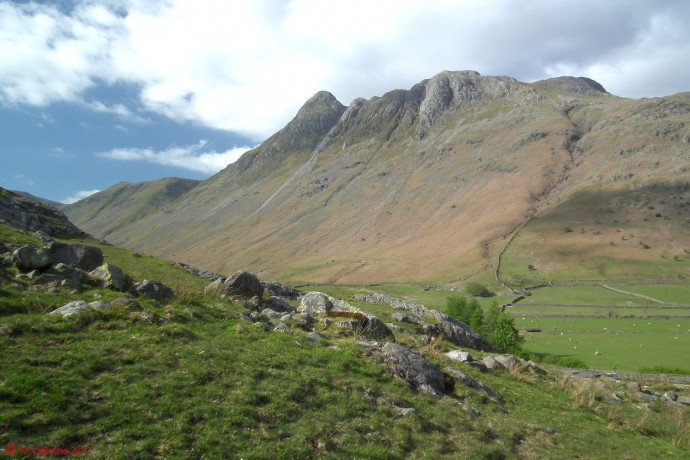 An inquisitive Robin which accompanied me for a short time on the final leg of the walk. (Between Old Dungeon Ghyll Hotel and Stickle Ghyll car park), He was flitting from fence post to fence post alongside me, and repeatedly diving to the ground just behind where I'd walked. - Presumably picking up insects disturbed as I'd walked by: - 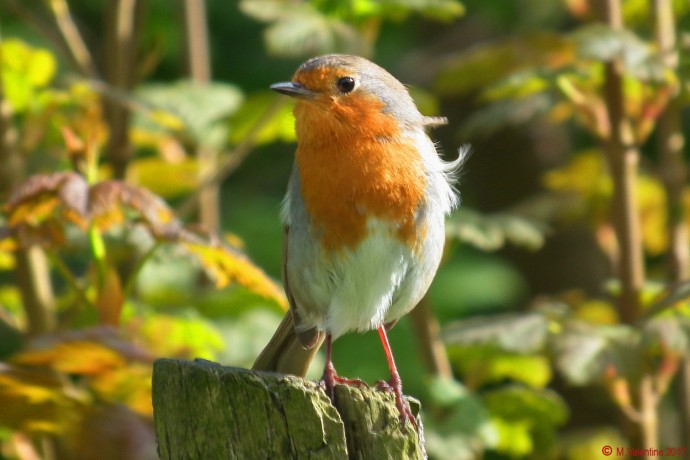 Thanks for posting. It looks like a fantastic route. Interested to know how tricky that ascent of Jack's Rake is.

Last weekend I did the Causey Pike, Grisedale Pike route that you recently posted, and absolutely loved it. All the scrambling sections were within my comfort zone, and tackled them head on, with only a little bit of head scratching as I worked out the footing for a 'stomach-high' step up on the Causey Pike summit. Got it after a couple of tries.

I'll certainly be adding this one to the to-do list, although I'm currently trying to walk areas adjacent to places I've already been (in recent times) as it means a lot more to be able to look around you and have intimate knowledge of what you're viewing, but I'm now slowly working my way in the direction of this area. Probably Dale Head, Hindscarth, Robinson for me next.

Hi Oli R. C. - Thanks for your comments. - and I'm pleased that you've found one of my walks worth trying for yourself.

To try to answer your query re Jack's Rake - There is nothing on there that would be physically too difficult to negotiate for the average fit person. However, there are some exposed sections, where a fall would be disastrous. So it's not the place to be if you aren't fully confident of your mental attitude to being in such "airy" situations.

Route finding on the rake is, for the most part, very straight forward, as you can only really make sensible progress by following the obvious route. There are a couple of points though, where decisions have to be made. One such place being just before the "finger" chockstone.

It can be climbed either by squeezing between it and the main crag-face, or by the short "wall" to its left hand side, (as you face up the rake), and then stepping out around its projecting "finger". Either choice, (each with its own particular requirement for bodily contortions!

) will get you past the obstacle - but most definitely the squeeze between the boulder and the crag-face is the recommended option. - It would be all too easy to fall off when taking the outer option.

The other head scratching area is near the end of the rake, where the final "exit slabs" towards the "Little Matterhorn" have to be negotiated. You have to be certain that you are taking the correct route - as going off track up there would quickly put you into some very difficult territory!

There is a truly excellent YouTube video of the Jack's Rake scramble by Christian Rouse, and I would highly recommend watching that, (and perhaps a few others too). If you do, you will note that Christian climbs up the outer wall and then strides over the "finger", and makes very light work of it too!. - But bear in mind that Christian Rouse is a Rock Climber as well as a Fell- walker and will have a slightly different mind-set towards route finding.

As for gaining knowledge of surrounding areas - In my view there is no better method than studying a "summit panorama" such as can be found in the Wainwright Guides, or Mark Richards "Fellranger" series, when you are standing on a summit. By doing so you will very quickly be able to pick up the nuances of what individual fells look like from different places, and be able to identify most fell-tops from wherever you might then be. (Worth knowing that "360 degree named summit panoramas" from almost every Lakeland fell-top are available as PDF downloads on Mark Richards website).

Finally, with regards to Dale Head etc. - I see from your other post that you've effectively just done the first part, so you may not want to retrace your steps so soon. But the full "Newlands Horseshoe" - Catbells, Maiden Moor, High Spy, Dale Head, Hindscarth, (option for Robinson too), High Crags, and Scope End, is an absolute classic. A superb walk from start to finish! And that view down Newlands Valley from Dale Head summit - no matter which way you get up there, must be one of the very best views in Lakeland!

Hi Mike, thanks for taking the time to write such a detailed response.

I've just watched Christian Rouse's superb video, and I must say, Jack's Rake is a lot bigger than I had first envisaged! And taking on board what you say, I think it might just be beyond me. As you say, much of it is about confidence, and I have a fair idea of what I'm happy with, but as a lone and inexperienced walker, I think this is probably not for me.

About 3 years ago I did Sharp Edge, and whilst I was ok with it, I was with somebody with more experience, who made sure I didn't `go wrong'. But even having done it, I probably still wouldn't do it again by myself. I'd rather keep well within my limits and ability, than go even slightly over them!

But I hear everything you've said, and it's something for consideration in the future. I've got to say, though, it does look utterly amazing! Hats off to you for doing it.

I've now added Mark Richards to my bookmarks. Not one I'd come across before, so I'll have a good read through his site. And indeed, Wainwright's books are brilliant. I've just gotten The Western Fells, as I'm now heading into that territory. I like distant fell spotting when up high, although for me, I don't think things truly sink in until I've been over it, past it and around it, hence me trying (at least so far) to progress in small steps. Funnily enough, I have been to many of the fell tops right across the lake district, but this was back in my early school days, some 25-30 years ago! So my memories are somewhat vague!!

On the topic of my next walk, I'm certain that at some point I will do that full Newlands route (after walking down Newlands Valley once, I'm already a fan), but as you say about retracing steps so soon, I fancy switching it up, and heading up from the other side, probably from Buttermere and incorporating Fleetwith Pike (and Edge), as long as it's a viable route and distance is ok. Will do some research, but happy to hear any other thoughts on the matter.

But thanks again for all your info, even though it looks like I may have been getting ahead of myself with Jack's Rake. But that's the beauty of forums such as this, where we can seek/share knowledge and experiences. You clearly know what you're talking about, so I treat your words with the credit they deserve.