I just wanted to share a couple of walks that I've done over that last couple of weekends, both of which I learnt of from this here website. My fitness level has some room for improvement, and not having done any lengthy walks for some time, my legs and feet may not have been too happy tackling anything particularly strenuous, so I thought I'd ease myself into it with an `Easy' route and chose 'Around Derwent Water'. https://www.walklakes.co.uk/walk_130.html 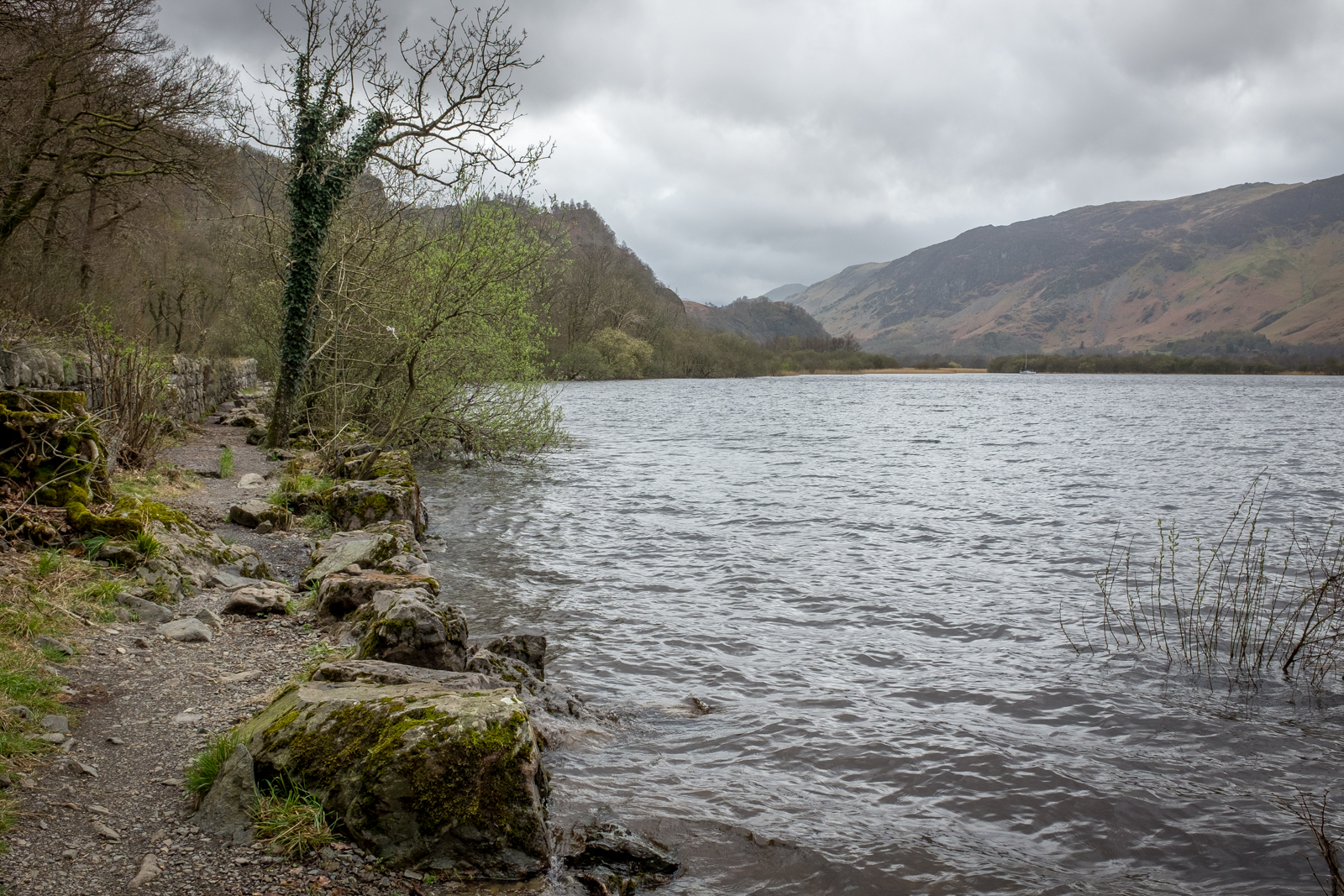 Derwent Water alongside Strutta Wood by Oliver Coats, on Flickr

Recognising that this is a fairly busy area and route, I'm pleased to say that apart from the first couple of miles down the east shore, it was a very peaceful walk. The terrain covered was better than I expected, with a full assortment of surfaces, and navigation was fairly simple, although in hindsight I think I may have made a couple of minor misjudgements. The first being in the woods after Calfclose Bay, where after crossing a stream you end up on a little beach with steep clamber up some rocks, but I gauged it as me having gone the wrong way as from below, it didn't look like it led anywhere, so I turn backed and headed up to the road. Once above the scene, I could tell the path did indeed follow on up the rocks from the beach. Never mind, I rejoined the path rather than staying on the road. A tree down and subsequent hole in the path a little further on meant a bit of a scrambling detour. All good fun.

My second possible error was behind Ladore Hotel. I went to view the falls, but with construction going on behind the hotel and lots of temporary fencing, I couldn't tell whether the path behind was available. Maybe I didn't investigate enough, but I just double-backed and picked up from the road.

Before that, one highlight was, I think, at Barrow Bay, as I navigated through the trees along the submerged path, I rounded one tree to find myself within a few feet of a Cormorant sitting on a rock by the path. I froze, it flinched. We looked each other in the eye. I thought `what's the chances of me slowly getting my camera out of its case and getting a shot'. Unfortunately it answered my question after a few intense moments, as it lifted its wings, hopped off the rock and skimmed off across the lake. A great experience, photos or not. 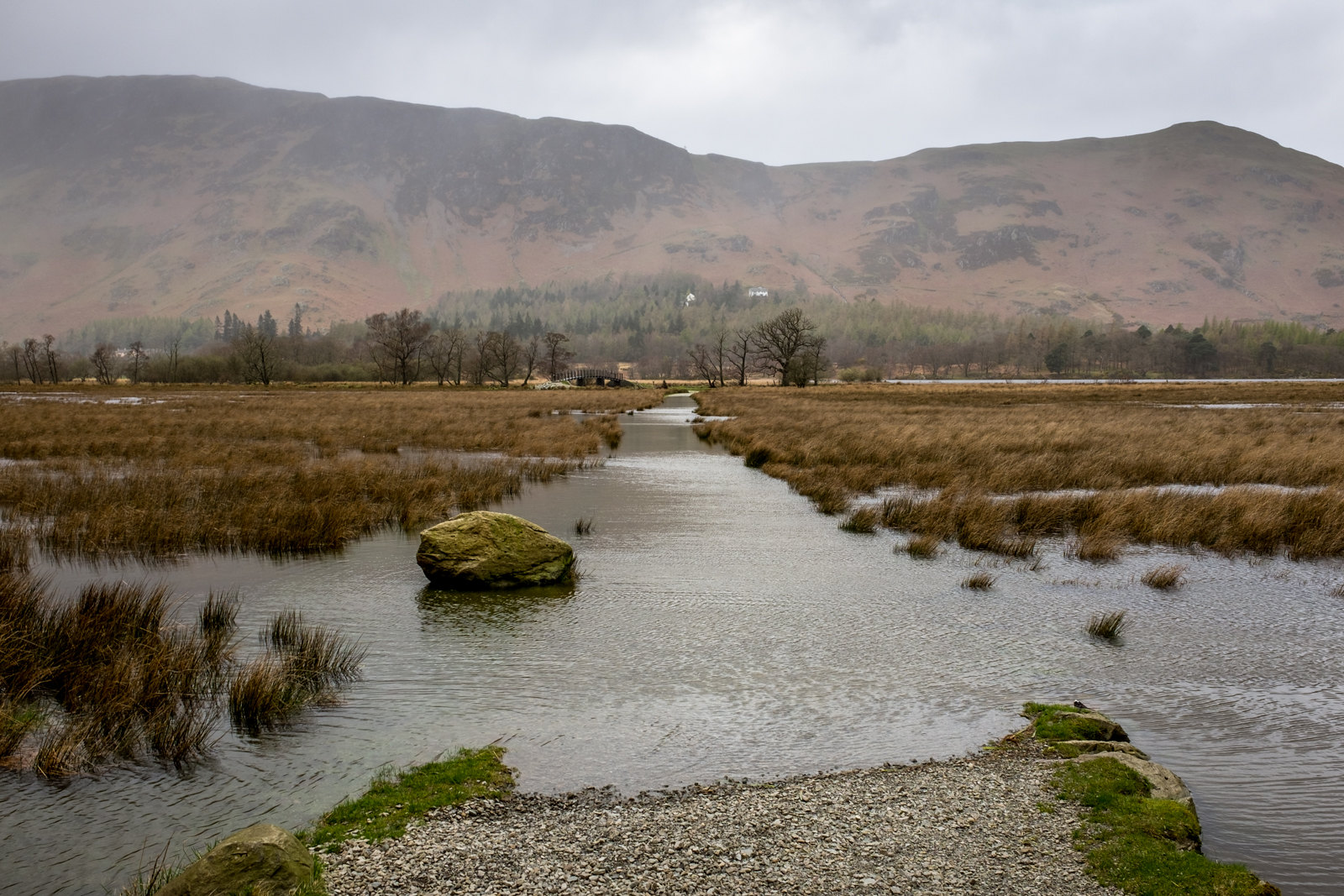 Flooded path to the Chinese Bridge by Oliver Coats, on Flickr

Reaching the path that leads to the Chinese Bridge, I discovered the effect of a topped up Derwent Water, as the path was submerged. I dipped a toe. Took a couple of steps. Analysed the floor beneath. Came to the conclusion that it was too deep for my boots. My boots are high, but I think wellies still wouldn't have been enough. Detour required.

I could see some dog walkers had used the bridge, and had taken the path south towards Newton Place, so was confident that was the way forward, although that did turn out to be rather damp, too. While taking this route, I spotted a runner come over the Chinese Bridge and take the flooded path! I can only assume that they either, didn't have far to go and didn't mind wet feet, were wearing a wetsuit, or were a fish. 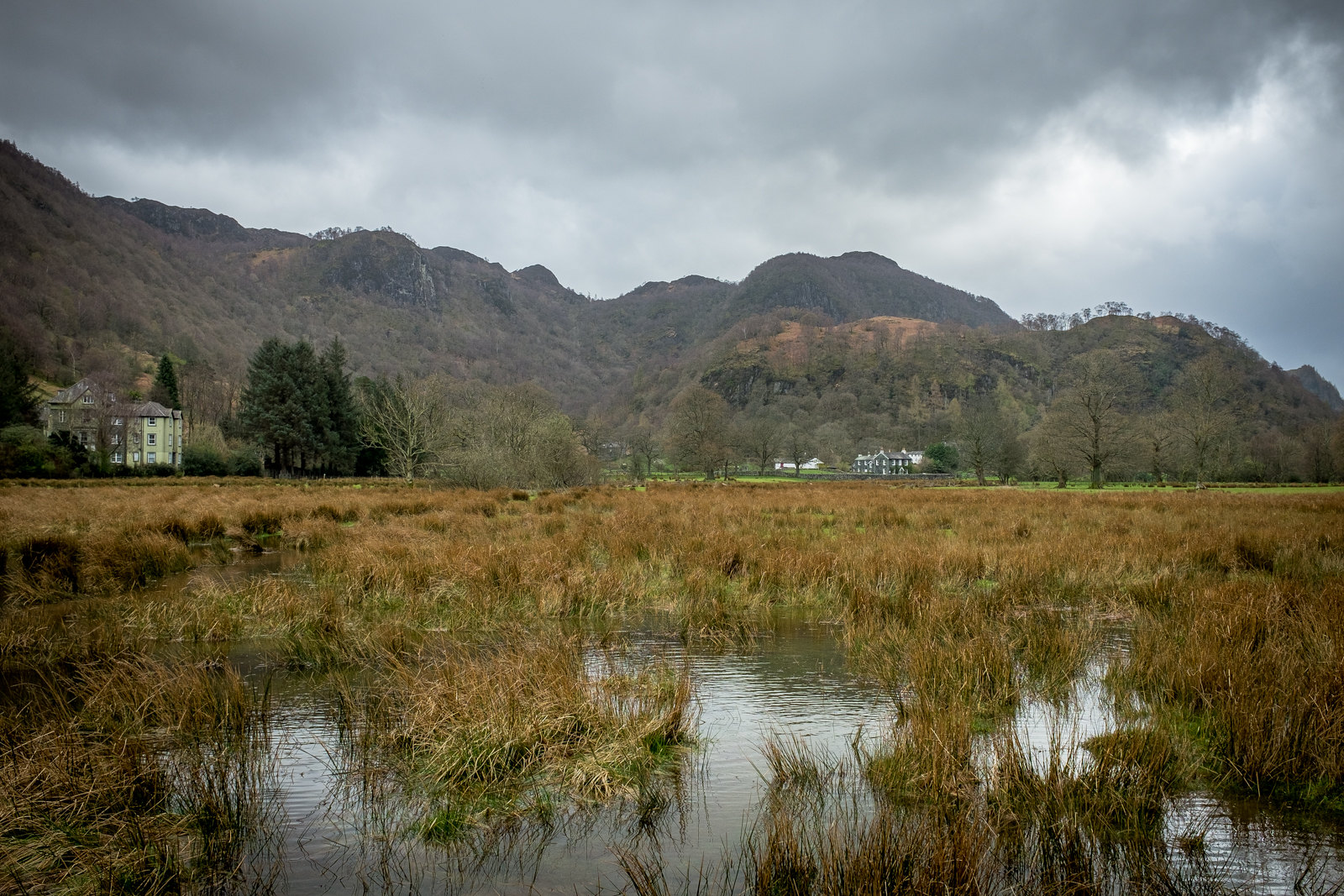 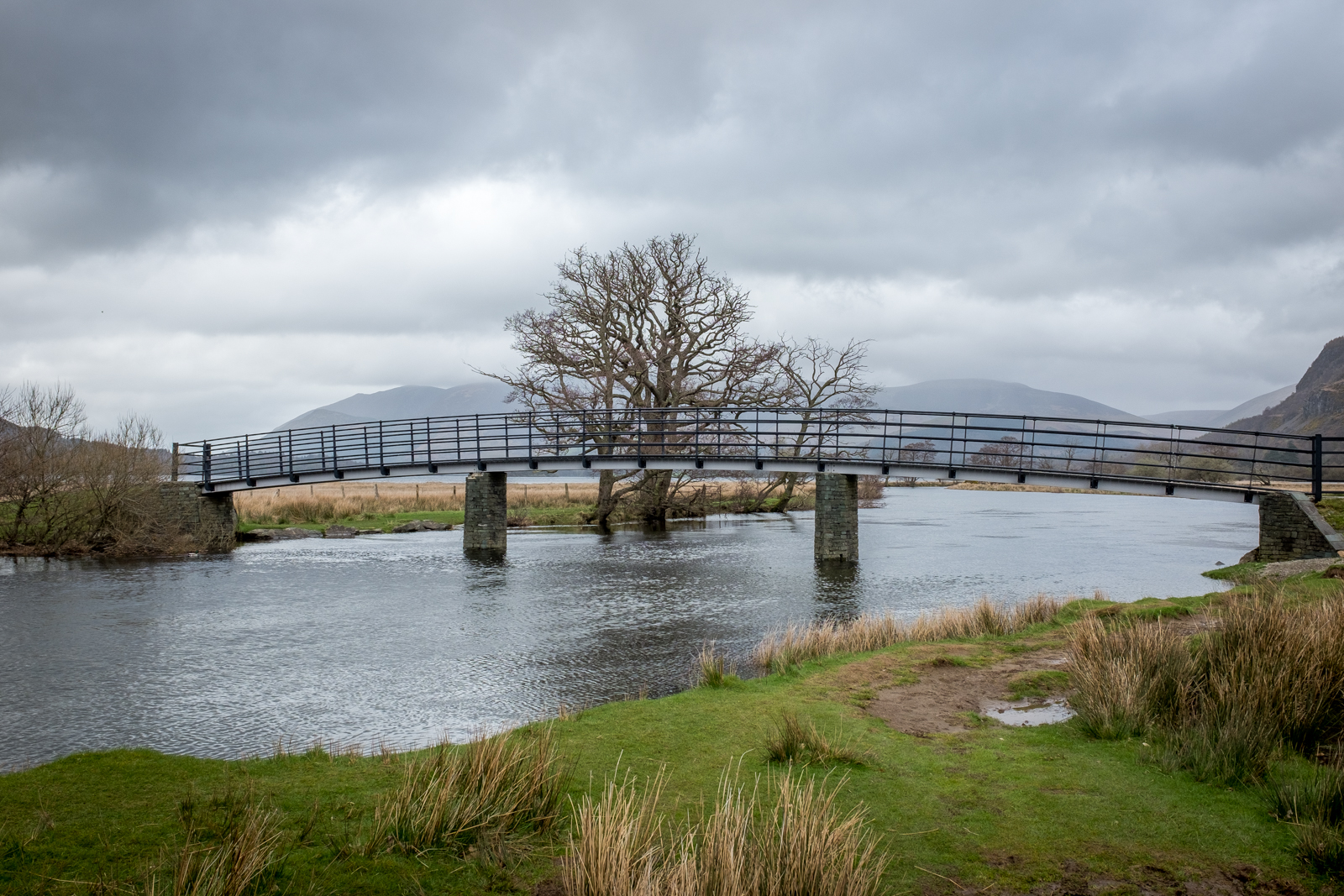 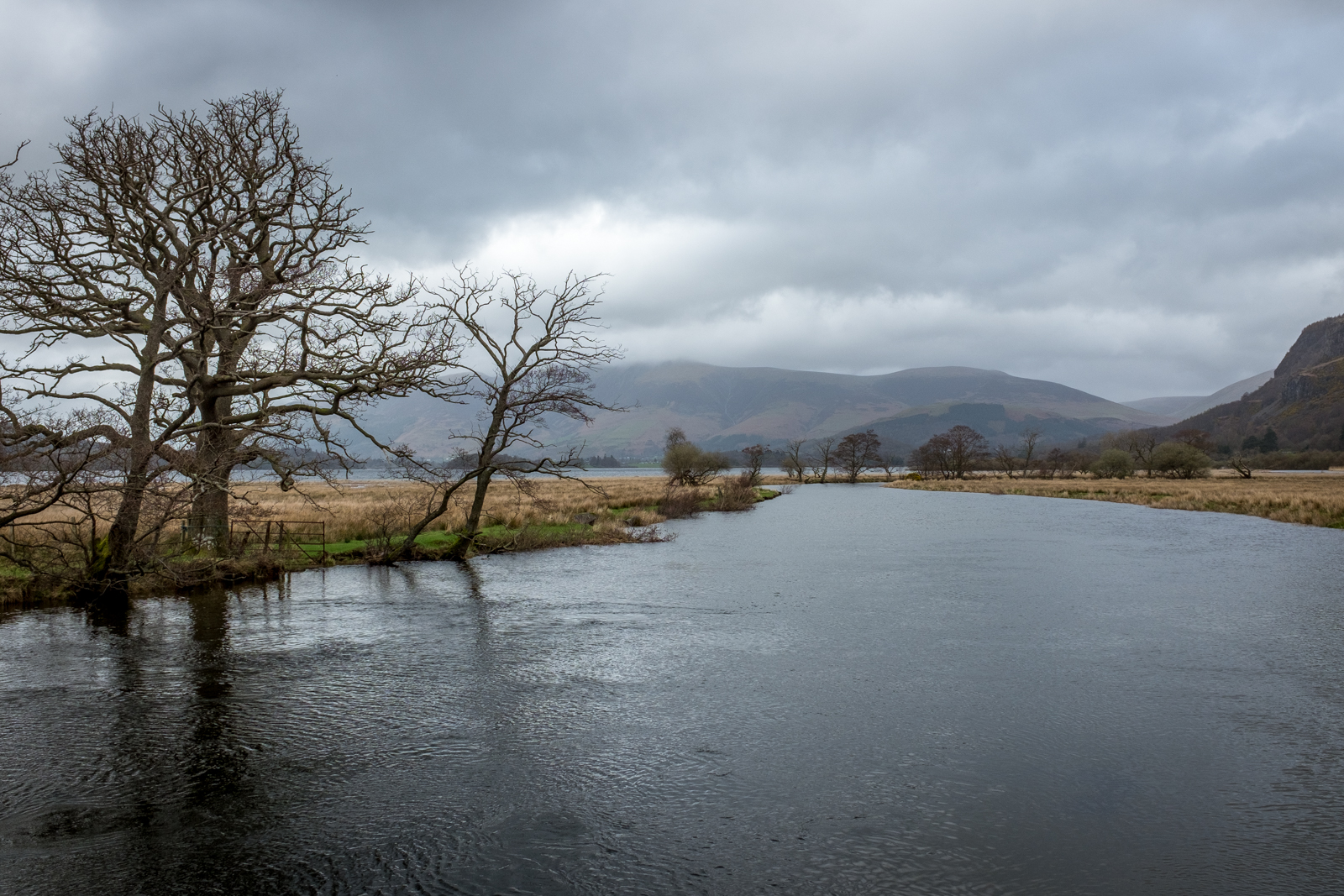 The boardwalk after the bridge, across the wetlands, was welcome. Progress had felt a little slow since Ladore Falls, so it was nice to get the pace up a couple of notches. This photo showing the scene of my next walk, up top. 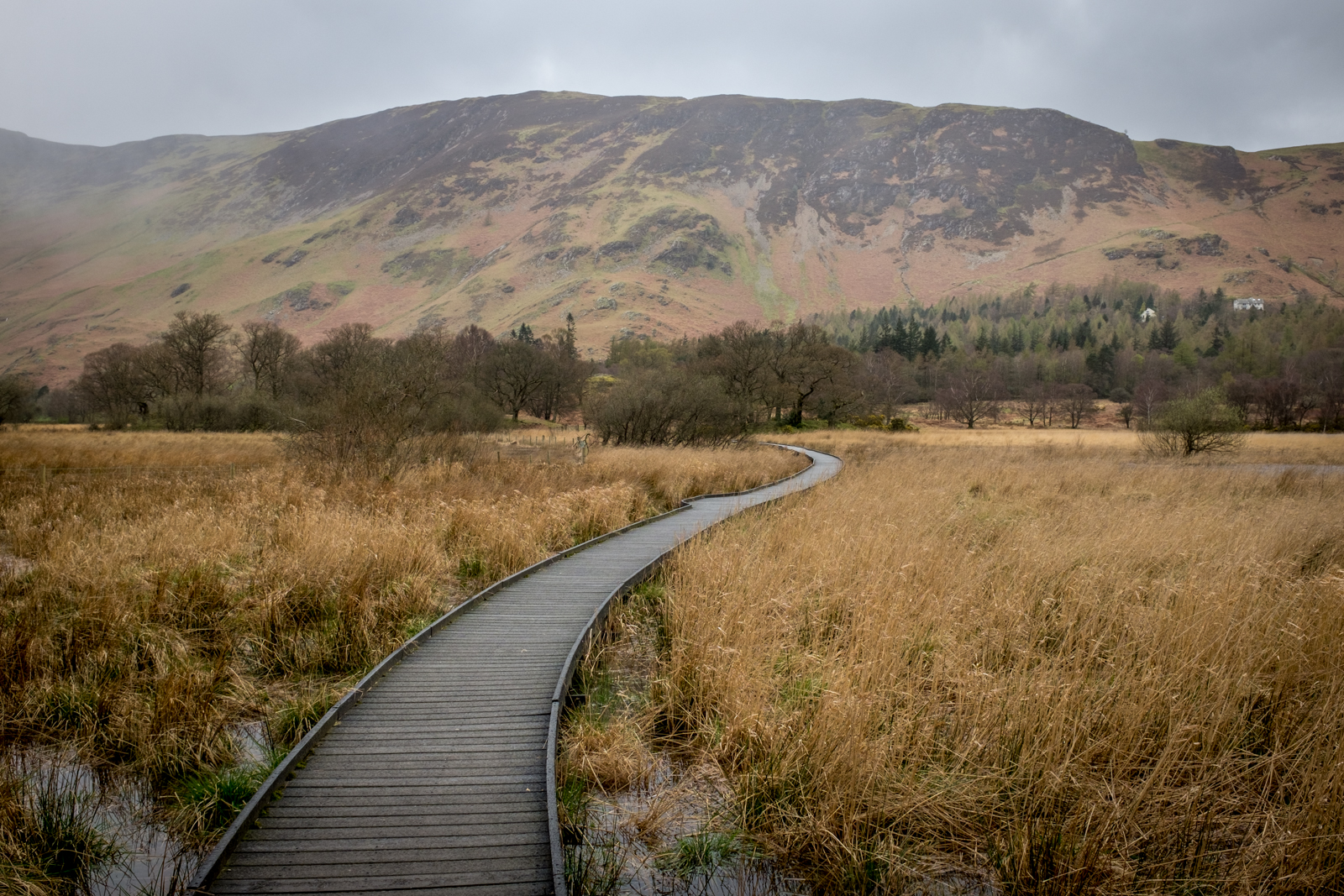 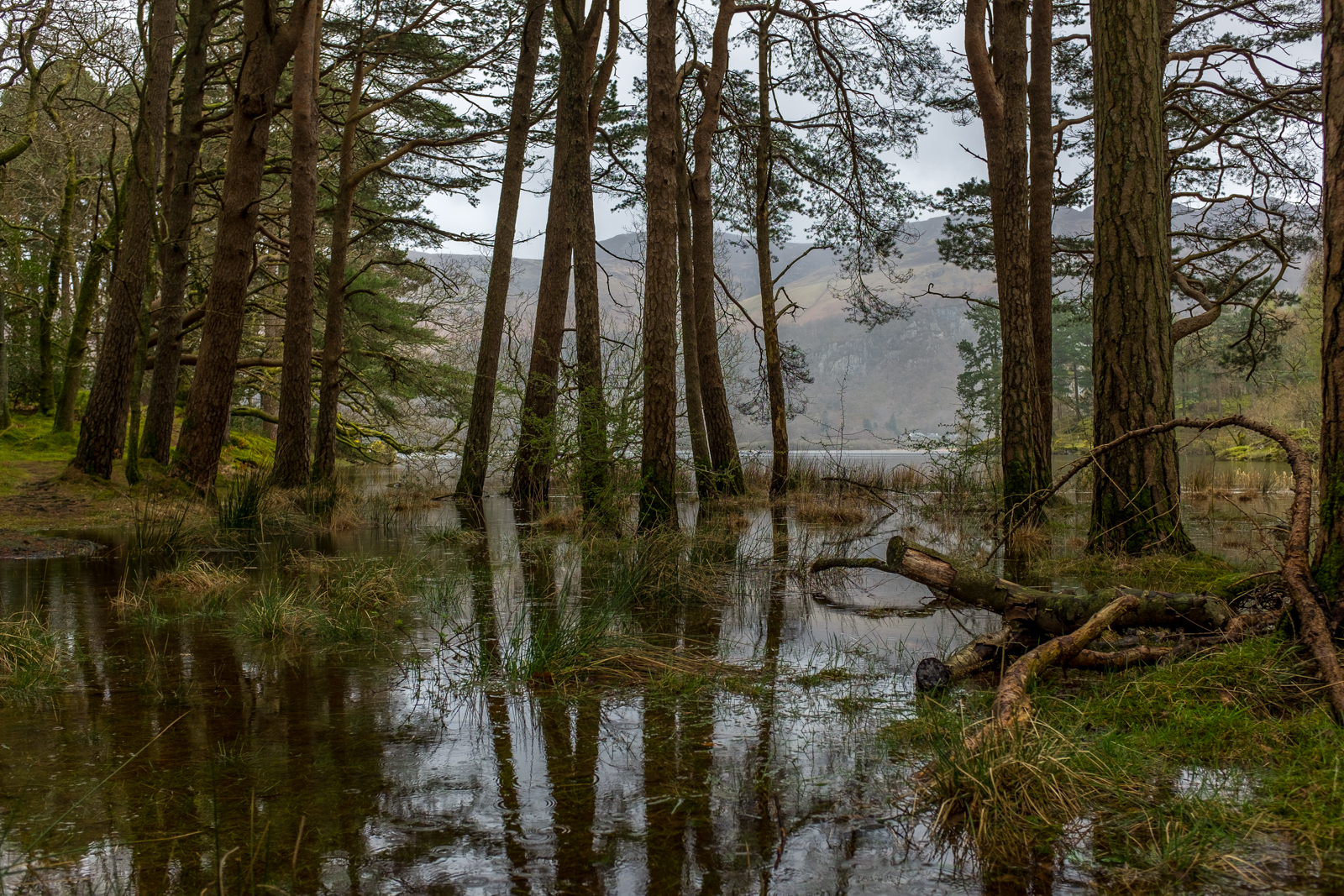 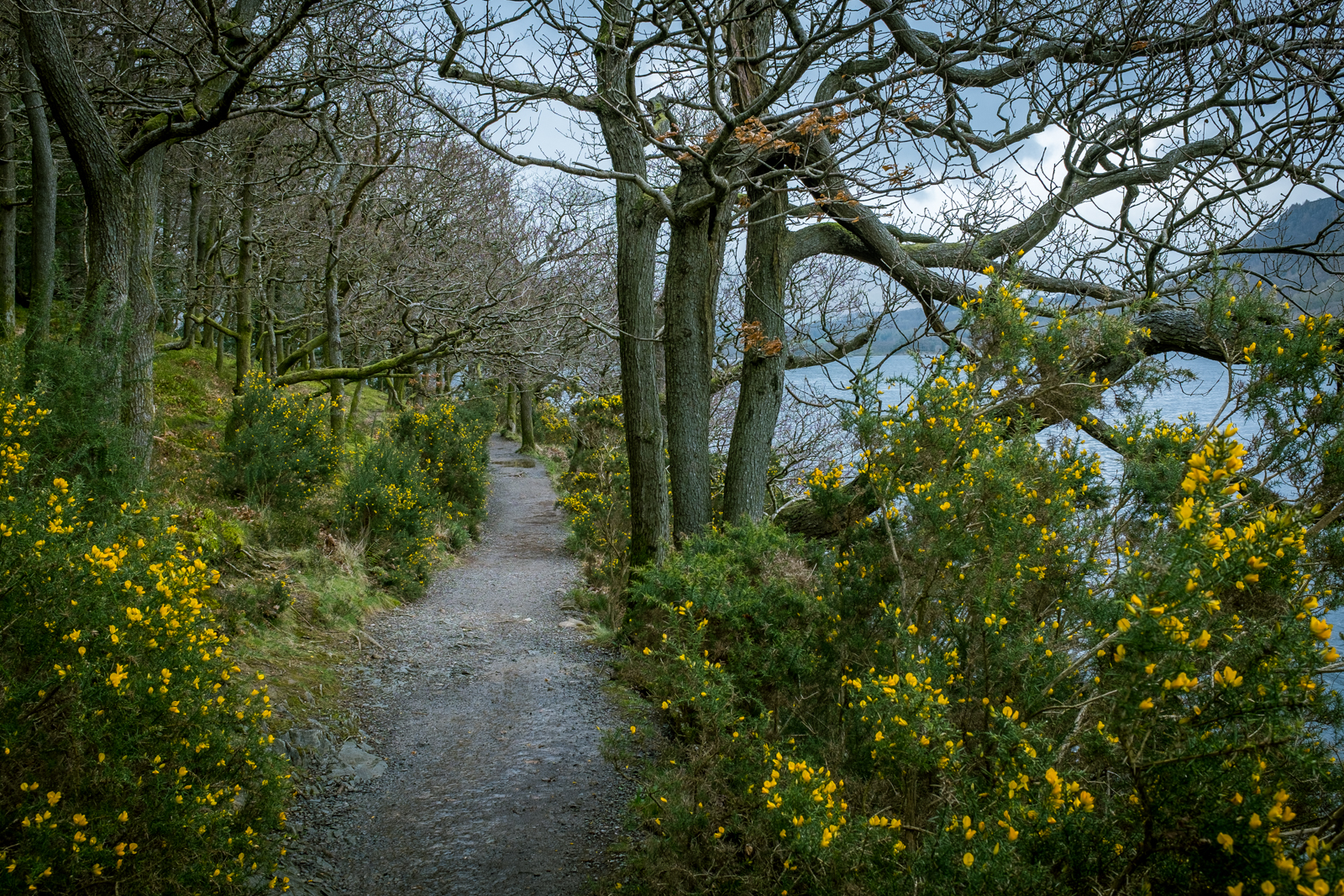 The west shore was a much quieter affair, greeting only the occasional walker along the way. Lots of beautiful woodland, complete with grazing Herdwicks. The house at Abbot's Bay - wow. What a place to live!

Rain showers come and go. Only heavy once. Great views across the lake. 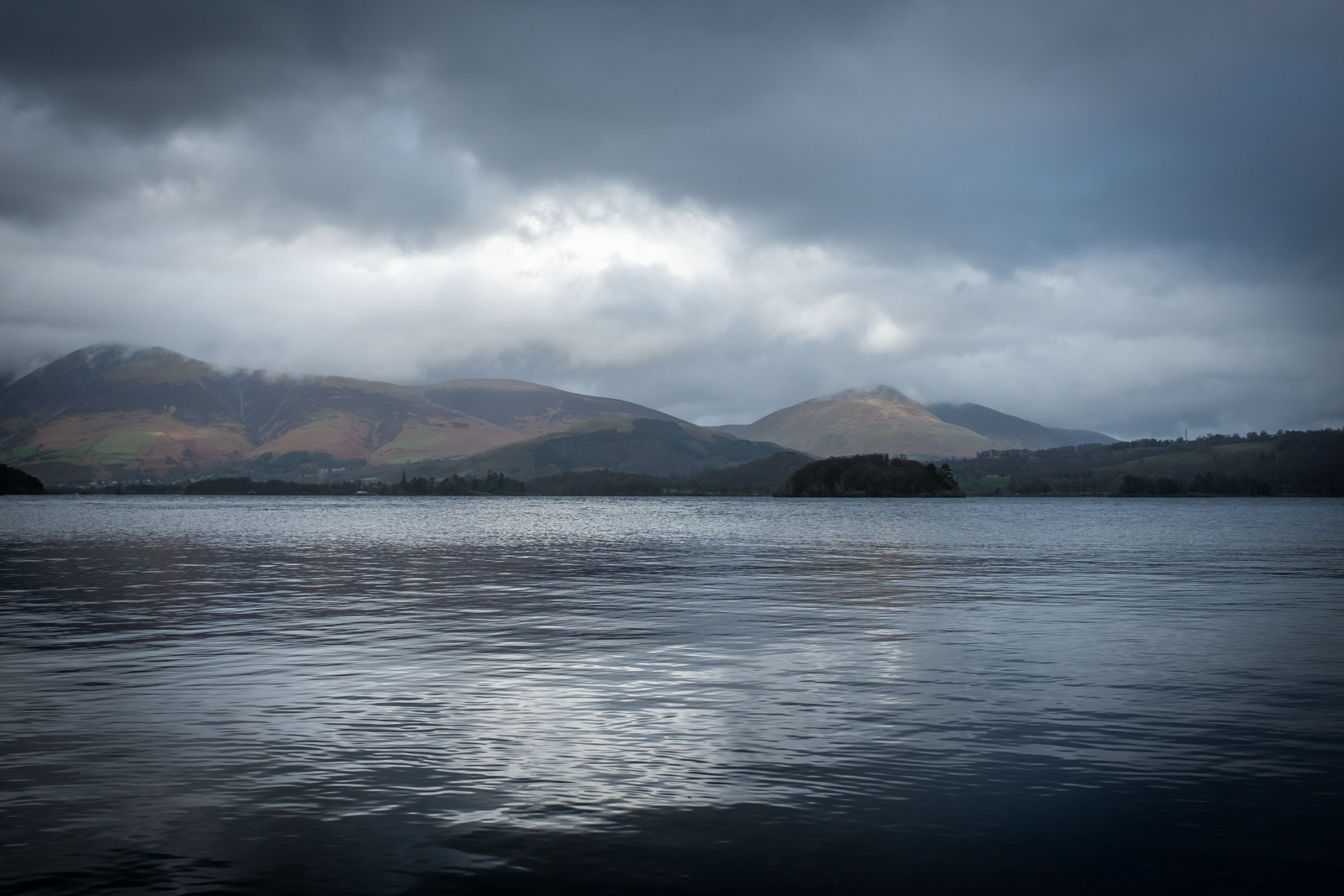 Then heading `inland' for the final few miles, nice to get a shot of an obscured Skiddaw. 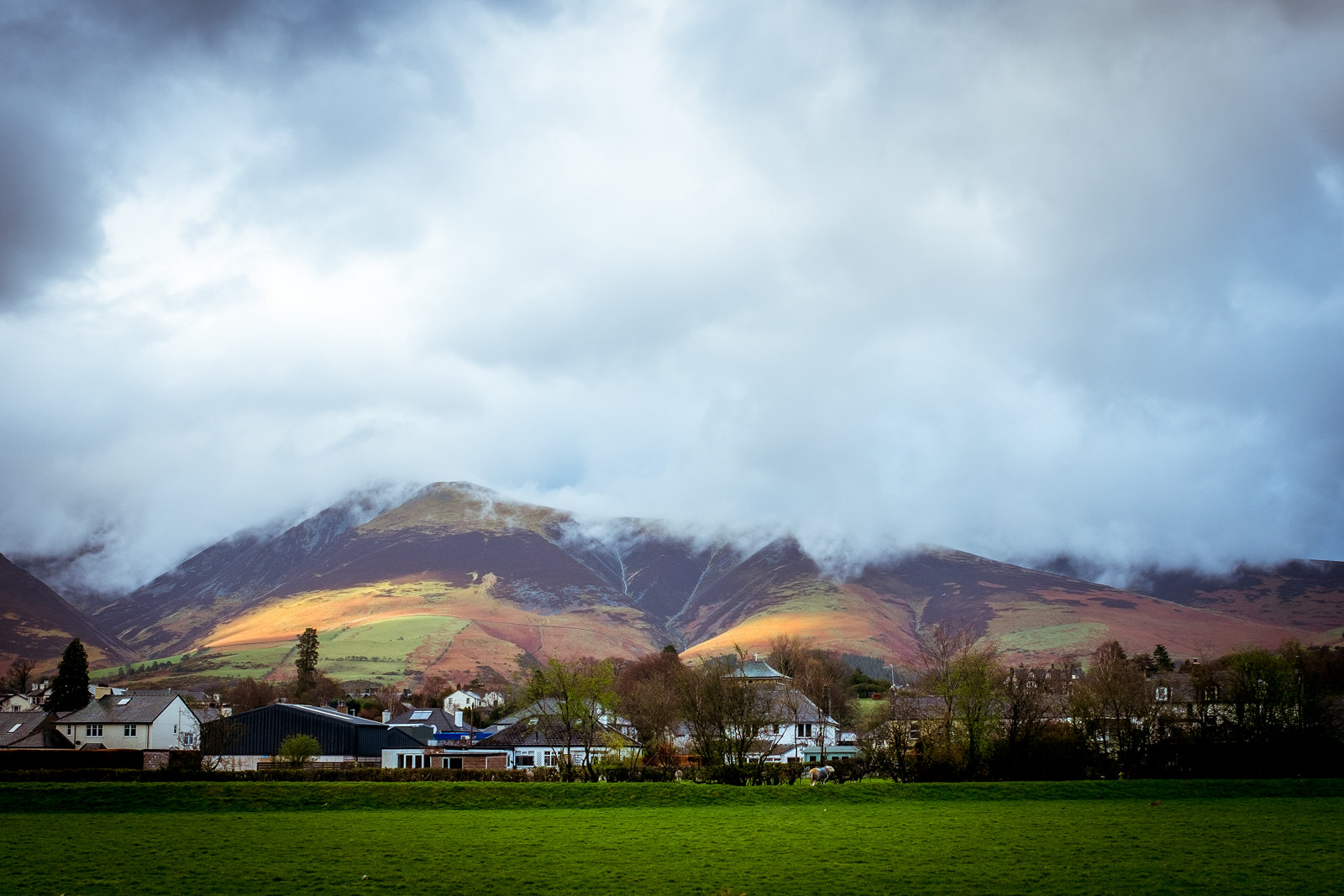 Thanks for reading, Oliver