Had been looking at possible options for Ben More which didn't necessitate taking a car on the ferry. Trouble was that while the buses pass to the south, couldn't find any to the north at Dhiseig. Looked like there were various approaches from close to the B8035 road end - most straightforward appeared to be from Ardvergnish. My parents, who had decided to go on holiday for a few days to Mull, offered me a lift from the north end back to Craignure and the plan was complete.

Up early, quick breakfast and away. Detour via Inverary because of the A82 night closure at pulpit rock. Actually found this route nicer to drive than the road up Loch Lomond after Tarbet.

Parked up in Oban earlier than planned with time for a second breakfast then wandered down to the ferry terminal.

Crossing was nice, weather looking promising if a little on the cold side.

Arrived at Craignure then got the West Coast Motors bus to Fionnphort and got off at Kinloch Crossroads.

Headed off initially west along the B8035 then up the track to Ardvergnish. This was one of those few trips when it was easy to see much of the route ahead.

Skirted round the house, saw a wee bridge and crossed the Allt. Should've looked at the map more closely as I then had to recross the Allt a little further up - wasn't too difficult though.

Then a case of heading in a NW direction towards the wee lochans at Maol nan Damh.

Clearer views of the final rise before the top ridge.

Got up to a flattish area.

View northwards to the sea.

Better view then of the scree slope which leads up to the final ridge to the summit.

Turned out to be fairly straightforward with parts of a zigzag track here and there.

After the end of the scree, could see up to the summit and down towards A' Chioch.

Short walk from there to the summit - avoided several snow patches quite easily by walking round them. Low circular stone wall at the top giving some shelter from the wind.

Took some photos, donned an insulated jacket and sat down to eat lunch. A couple arrived soon afterwards followed fairly quickly by a second couple - they'd all walked up from Dhiseig. They stayed for a wee while then left. Finished off lunch and took a few more photos before departing. 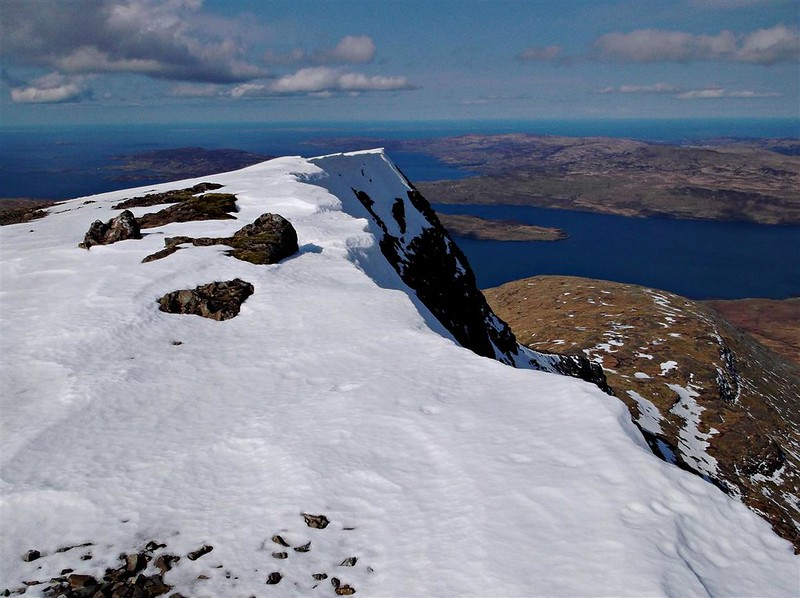 Must have stopped for about 40 minutes - would like to have stayed longer but was starting to get cold. Had originally thought about descending via A' Chioch and Beinn Fhada but my parents were expecting me at Dhiseig and I wasn't sure about a scrambly downclimb given the cold wind and possibly slippery conditions.

Just before leaving, had a look at the compass inside the rocky circle. Couldn't believe it when it was telling me to go towards A' Chioch when I actually wanted to go in the opposite direction. Walked a few metres outside the circle and the compass needle turned right round. Guess there must have been something magnetic at the top - only the second time this had happened to me.

Headed off across a snow patch then down through some more scree. Met the first couple again then the second couple.

Nearer the bottom stayed to the west of the Abhainn Dhiseig then crossed over for the final walk back to the roadside. Parents arrived shortly afterwards - still only about 1420hrs so plenty of time to get back to Craignure for 1700hrs (no 1500hrs ferry on a Friday) but decided to take a more leisurely pace instead - too nice a day to rush.