Up later than usual as this was to be a relatively short walk. Minus 5C on leaving the house and when parking at the Lower Tyndrum train station car park. Decided to go anti clockwise as wasn't sure about the section just below the summit of Beinn Chuirn - preference to be ascending rather than descending.

Followed the path NW by the train tracks, up through some trees then more steeply up past the old mine workings to Sron nan Colan.

Up past the mine workings

Higher up could see over to Meall Odhar with Beinn Chuirn behind it. Plan was to ascend Beinn Chuirn to the right of Coire na Saobhaidhe - knew it would be steep and from this distance it looked covered in snow with some cornicing at the top. Decided to have another think at the top of Meall Odhar.

Headed down and round the trees.

Didn't take long to get to the top of Meall Odhar.

Beinn Dorain and the Auch corbetts

Looking over to Beinn Chuirn, my planned ascent route looked rather steep in the snow. 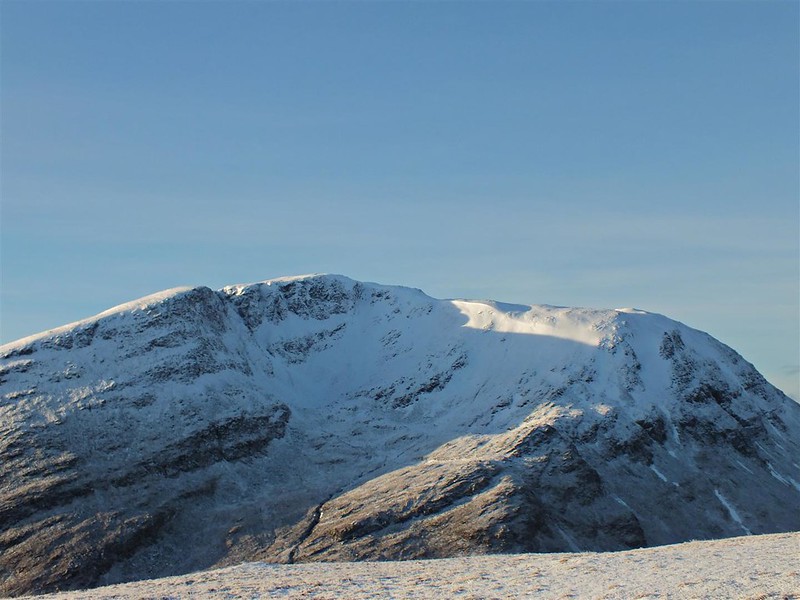 Decided at this point to have a look at ascending more to the south above the mine and headed more directly down towards the tress rather than more to the north. Turned out to be a bit of a mistake as I got a bit lost in the trees - followed a few tracks which looked like paths only to end up in more trees. Up, down, up and along a few times until I found a burn and followed it out of the trees - tall deer fence to be clambered over as well.

From down below the snow at the top of the corrie didn't look quite so bad now. Had plenty of time so decided to head up into the corrie to see what it was like.

Straight forward enough until the last section before the top - steep and snowy. Ice axe out and crampons on - carefully headed up to the top and found quite a large flat area.

Straightforward walk and the last wee uphill section to the summit.

Views from the summit

Although sunny the wind was very cold at the top. Dropped down a bit to get out of the wind for lunch and coffee - crampons and ice axe stowed away. Sat for a while looking at the view before setting off initially southerly then SE down to the Cononish track.

Back on the track for the walk back to Tyndrum

Back to Ben Lui

Nice walk back to the car through the trees - met two people on the path.