Fisherfield via An Teallach

Originally had planned to start off on the Saturday but delayed by a day due to poor weather up north. Not much space left in the Corrie Hallie layby - set off early on the Sunday morning and walked up the road to Dundonnell. No chance of a lift that morning as there was only one car the whole way and it wasn't going my way. It's only about 4km so there was also little point in farffing about taking a bike.

Got to the start of the track on the left just past the houses, hopped over the burn and started on the path up the hillside. Weather was OK to start with but there was some light drizzle part of the way up. Stopped to put on a fleece but decided against waterproofs - drizzle didn't come to much. Had read that the new path was boggy so stuck to the old track up Meall Garbh.

Was hoping to see some goats but only saw one in the distance.

View of Glas Mheall Mor to the south before coming round by Sron A'Choire and meeting the new path. Then round and up towards Bidein a' Ghlas Thuill.

Weather cloudy but reasonably clear on final approach. However, further up the cloud rolled in with no views at the top at all.

Waited a bit but was obviously not going to clear. Headed off SW towards Sgurr Fiona. Intermittently could see a little of the surrounds but the clag had completely closed again at the summit. Must have missed the final track to the top in the mist but got up there in the end. No views today then.

Did find some colour though.

No chance of it clearing so headed down WNW until reaching a bealach with a rocky outcrop. After that the ground started to rise again towards Sgurr Creag an Eich so turned sharply SSW. Quite steep with loose stones and scree which then became more grassy with rocky areas and boggy sections lower down. Almost on cue the clag back up at the top started top clear - would probably have had some pretty good views at the top if I'd been an hour or two later in departing.

Views of Loch na Sealga, Beinn Dearg Mor and Fisherfield opening up gradually. There's also an impressive waterfall on the way down but difficult to get a good line of sight due to the trees and bushes on the overhanging edge. Wasted some time climbing over a deer fence trying to get a better view then having to get over to the other side and the fence again. Turned out that it would have been better to go up and round the fence as there was a view further down.

Seemed to take quite a while to get down and round the SE end of the loch.

Looking back up the descent route - cleared at the top now.

Then headed south towards the Abhainn Srath na Sealga. No option but to remove boots and socks for the crossing. Met a German couple on the other side who had walked up from the north end of the loch, were going to Shenavall and were planning to walk up An Teallach the next day.

Picked up the boggy track towards Larachantivore. Not sure about using the emergency accommodation though other than in an emergency.

Does look a nice place to have a holiday lodge.

From here the path was boggy in places as it led southwards up Gleann na Muice. Came to a fork and turned to the west and starting to ascend to a bealach just before Loch Beinn Dearg.

There's a steepish section to the north of Ruadh Stac Beag which is skirted round before coming to the two lochans almost at the foot of Ruadh Stac Mor.

Some views from near the lochans before starting the climb up to the summit.

Views from the top and over Fuar Loch Mor.

Clear view over to A' Mhaighdean but had to descend first. Found this a bit tricky as I lost the path (if there was one). Ended up having to traverse to the side before getting back on to the path. Met three walkers here who were camping nearby.

Straightforward walk up to the summit of A' Mhaighdean. Pity the cloud was so thick as the views could have been a lot clearer.

On the way down, met a walker who was in for the day for the five munros. Now for the last part of the day - didn't look as though there was much in the way of water sources on the map but managed to find a wee burn on the descent and pickled up a few litres of water. Then down through the peat hags and boggy bits before ascending to around 600m up Beinn Tarsuinn.

After a bit of toing and froing, managed to find a reasonable spot for the tent with a decent view of Slioch. Set up the tent and cooked up dinner - no midges as there was a reasonable wind at this height.

Sky cleared during the night - tried a pre dawn photo at just after 0300hrs.

Cooked up breakfast, packed up and got on my way. Always seems to take longer than expected to do this. Light improving all the time as the sun rose higher.

Frequently came across puddocks on the way.

Approaching the top of Beinn Tarsuinn.

Views from the top then set off for Mullach Coire Mhic Fhearchair. 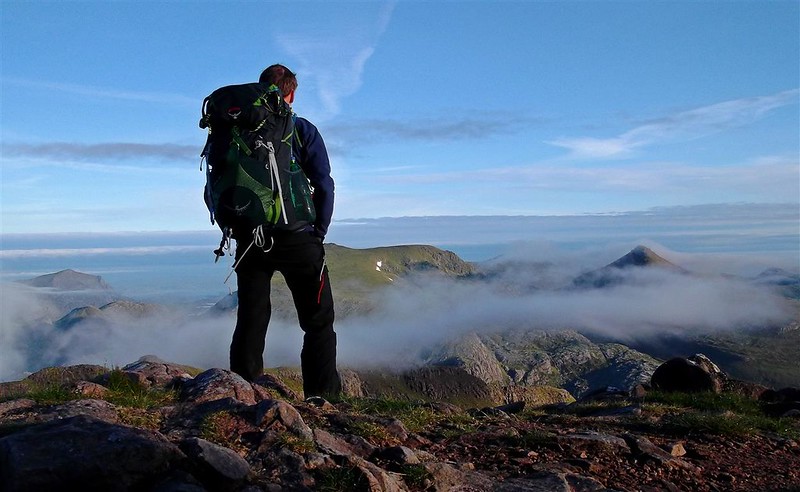 Down to Bealach Odhar then the track skirts round the base of Meall Garbh - view up to Mullach Coire Mhic Fhearchair.

View from the top.

Then on to Sgurr Ban .

Cloud base had dropped considerably on reaching the summit.

Nearing the end now. Descent over another boulder filed towards Beinn a' Chlaidheimh. Came across a wee stone howff on the way.

Loch a' Bhrisidh and beyond.

Rock head and face just before final ascent to Beinn a' Chlaidheimh.

Cloud base now quite low at the top.

Second water crossing requiring boots/socks off at the bottom then started up the track. View over to Shenavall.

Met a DofE assessor sitting looking at the view waiting for some groups coming in. Further along the track, met another assessor who was with a different party. Apparently it gets quite busy here at this time of year.

Disturbed a ptarmigan and two chicks on the way back by accident. The chicks headed off in different directions while the adult flapped and circled round me then sat still then flew off. She only flew back towards the chicks when I was well away.

If the weather was good, was then going to head round to Kinlochewe for Slioch as my work had agreed I could take another day's holiday if needed. However, with the cloud base now down around 700m and a forecast for mist/rain the following morning, decided that it wouldn't be enjoyable. Got changed and drove back to Glasgow.