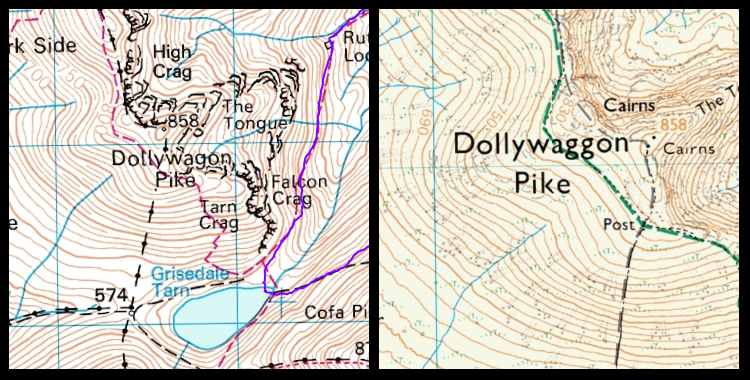 When I raised this on Twitter it was picked up by @MountainShapes who (as well as pointed out my typo!) extended the story a little further with the revelation that the old 1:63,360 1" to the mile OS maps used the two "G" spelling.

As far as I can remember the first series of 1:50K were pretty much 1:63,360 printed a bit bigger(!) so I'm slightly surprised the spelling didn't carry over. Whatever.

Anyway, you'll see that he also including @OrdnanceSurvey in his tweet and that woke them up.

@MountainShapes @WalkLakes thanks for alerting us to this, we'll take a look at it

@OrdnanceSurvey You might want to view @WalkLakes's blog post (http://t.co/iEUnTD3nq0) which has some historical statistics on the spelling.

@MountainShapes @WalkLakes it's already been looked into by the team and they're using 'Dollywaggon', 50k maps will be updated in due course

Anyway as Wainwright and the Database of British Hills prefer two "G"s we will be sticking to that spelling too.