Although less common than sheep you may come across cattle on your walk in the Lake District. Cows present a real problem as they are a danger to both you and your dog and every year people are killed or seriously injured by cows, with fractures to arms, ribs, wrist, scapula, clavicle, legs, lacerations, punctured lung, bruising, black eyes, joint dislocation, nerve damage and unconsciousness being among the reported injuries.

The numbers aren't huge - in the fifteen years from 2000-2015 74 people were killed of which 18 were members of the public - but it is a danger and you don't want to be a statistic. Most of the fatalities are farm workers but a quarter are members of the public walking on footpaths or commonly used rights of way and about two thirds had dogs with them.

Following a number of recent incidents throughout the UK with walkers being badly injured or killed by cattle, the Lake District National Park Authority and the National Farmers' Union (NFU) have now issued a joint safety advice reminder. 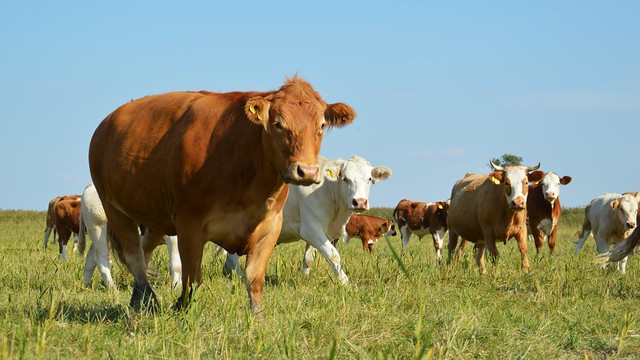 In our experience it's not bulls that are the problem but cows and the time when they present a particular danger is when they have calves with them as in this situation they may regard you and, especially your dog if you have one, as a threat.

The best strategy is to keep a good distance between you and the cows and ideally not be in the same field at all but if you do have to pass through a field with cows in then:

Photo of cows by Tobias Nordhausen and licensed under a CC BY 2.0 licence.