Kinder Scout - a full round

This was a walk I did back in 2015 and was split into two days although some years back I had done it in 1 day but suffered the next few days from overdoing it in terms of length/speed. The walk is basically around the edges of Kinder Scout. It was also planned on the basis of having a full day 1 but limited time on day 2.

Day 1 Parking was the free but limited one between Barber & Upper Booth. The route was up Grindslow Knoll and then on round clockwise to slightly past Fair Brook then cutting back to the top of Grindsbrook Clough and down the way up.

From the car park its a short road walk to Upper Booth, its then a bit of field walking before the steep walk up Broadlee Bank Tor (Pic 1) to Grindslow Knoll. This steep path is not marked on maps it's obvious on the ground and visible on satellite images. Its the scar straight up the hill in the pic. 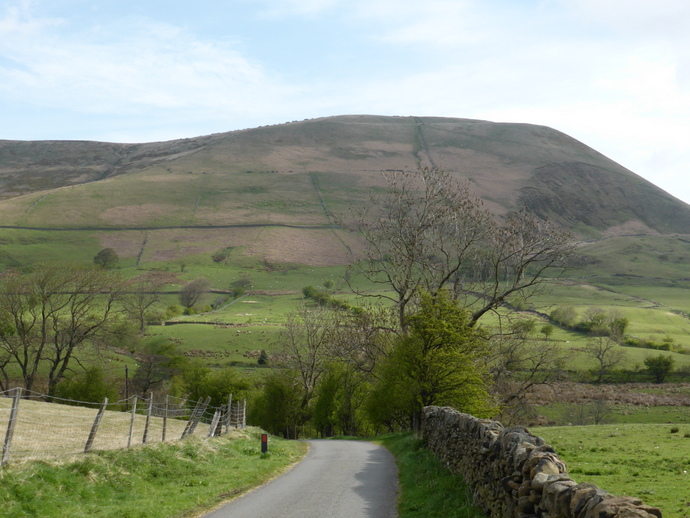 Reaching the top you're into open moorland that can be quite wet under foot and the path disappears into little more than a sheep track. I skirted round the actual Grindslow Knoll as it was optional for me.

Hitting the path round the edge I turned left onto it & one follows where many many feet have gone before. Passing the top of Crowden Brook (Pic 2) where it tumbles down off the plateau. 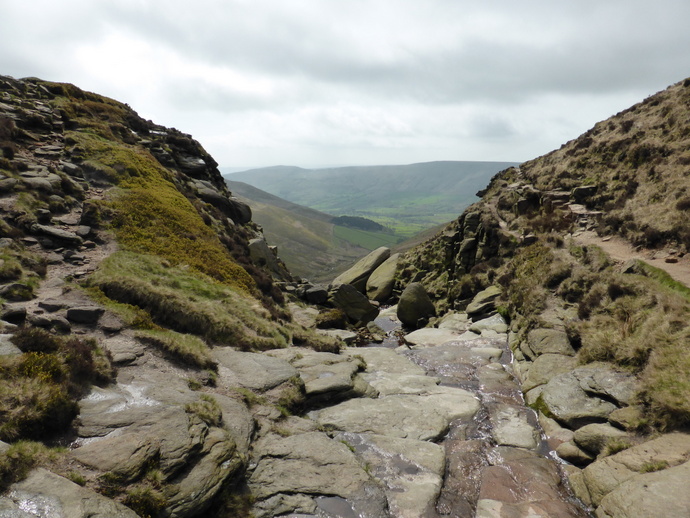 On a bit from the top of Crowden you come across Crowden Tower a rock formation, on one of my many different walks up on Kinder I was asked by a couple where the tower was, who were then disappointed that it wasn't an actual tower. There are many rock formations & outcrops along this edge to draw ones interest.

Having previously never been to the highest point on Kinder, this time I had put a few positions into my GPS unit that are deemed the high point and wandered around these locations looking at my unit to note elevation and with post walk geotagging of pics I believe this (pic 3) is the "summit" 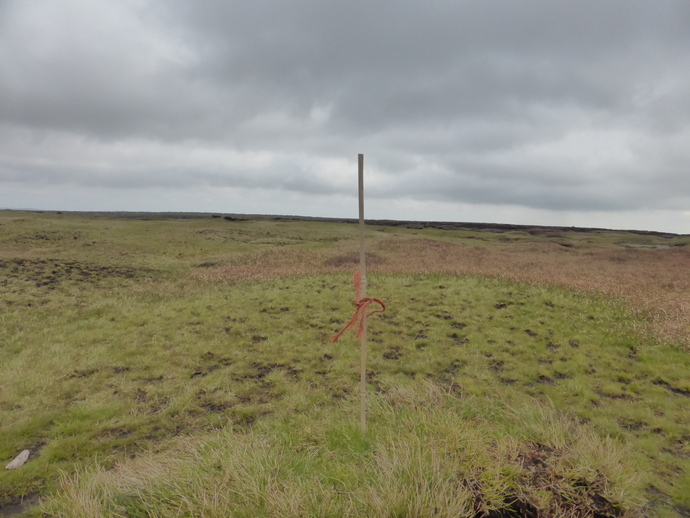 On to the SE corner and its cairn (pic 4) with Mam Tor & Rushup Edge in the background, around this point the paths have been "flagged" and it's where the current route of the Pennine Way comes up. The next significant point and always busy spot is the trig pillar at Kinder Low (pic 5), having paid the obligatory visit I headed out towards the edge more to find quietness and more of a view for lunch part 1. 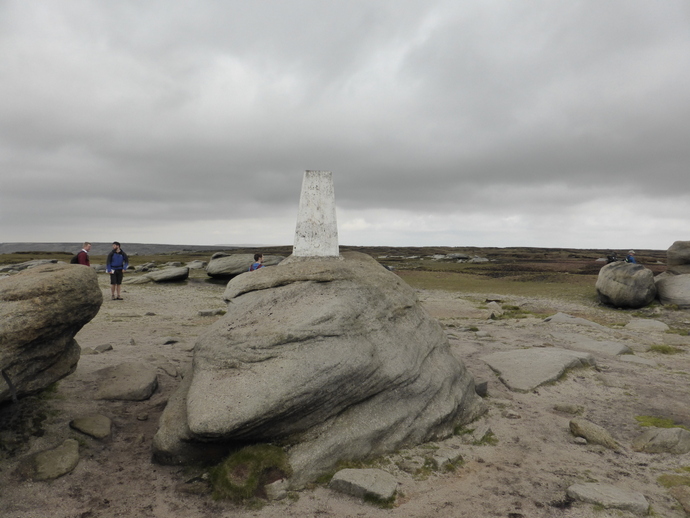 Reaching the cairn that marks where there's a slight bend in direction from NNW to NNE the edge past Kinder Downfall becomes visible (Pic 6) in the distance - to the right of the cairn in the pic. 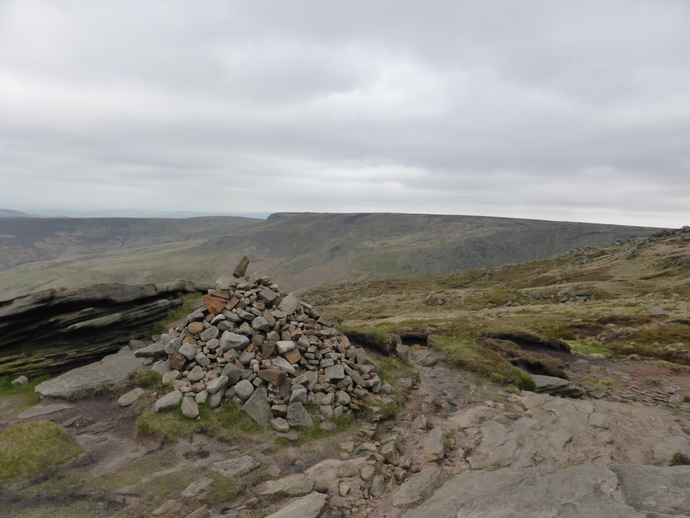 This Western edge of Kinder is as busy as the Southern one with Kinder Downfall the target for lots of people. When I reached it, it was doing it's famous trick of going upwards (pic 7) and vid here (https://goo.gl/4Gz1LQ), although there wasn't much water flow, it was still worth seeing. And Pic 8 is looking out to where the River Kinder drops off. This is also where the old route of the Pennine Way joins the new. It was then on a bit before I got this view of Kinder Reservoir (pic 9) although one gets to see it from slightly different angles as you walk along. 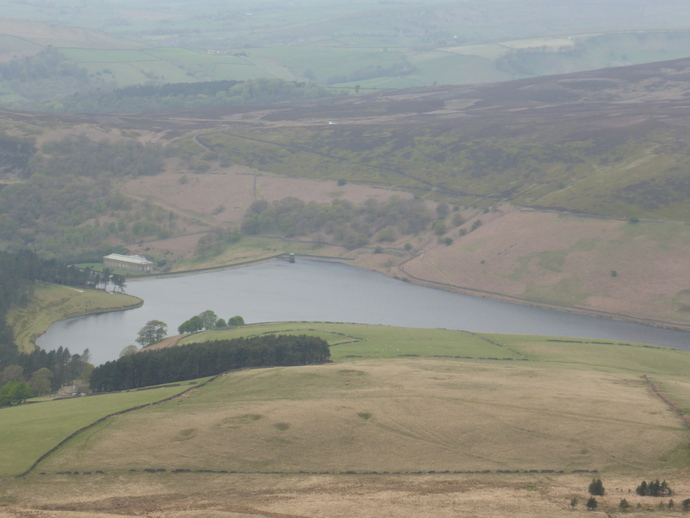 I stopped for lunch part 2 with views of Kinder downfall, but a short while after starting off I suddenly realised I didn't have my glasses on so turned back thinking I'd left them at my lunch spot, before a minute later realising I'd hooked them onto my rucksack chest strap! Heading on one then turns onto the unfrequented Northern edge which I think is the wettest of them, but I like it as it feels remote with no civilisation in sight baring the big jets heading to Manchester. One's next milestone is Fairbrook Naze (pic 10) the North East corner where civilisation shows up again with farms & Snake Pass below. Pic 10 Trooping on it's across Fair Brook itself, I then deviated slightly keeping level rather then dropping to a really boggy bit of the path shortly afterwards one comes to a boulder field where great big boulders protrude slightly from the grass and it was here that my planned cut back was & to mark my position I put down a 2p coin and recorded its position on my GPS. The 1st part of the cut back was to wend my way through the boulder field roughly following a route I'd plotted online from aerial views and put into my GPS to hit a certain grough that showed as a whitish streak on the satellite views and I'd hoped & it did turn out that it was a sandy bottom (pic 11) rather peat to make it easier walking as long as one has waterproof boots, Pic 11 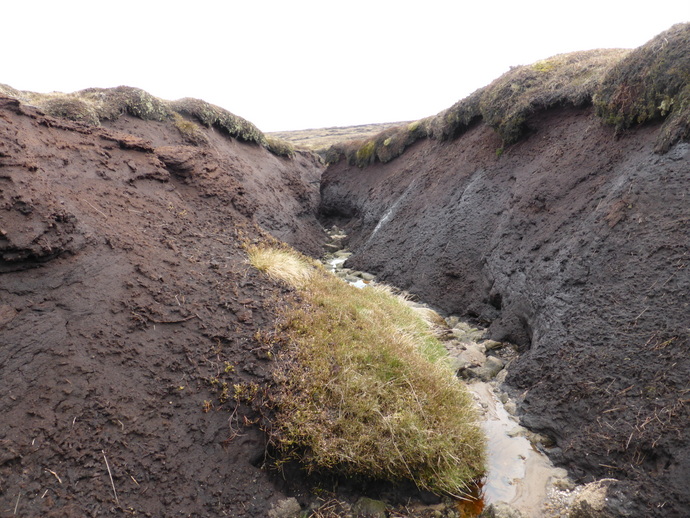 It was then just a case of following the water downstream as it slowly turns into Grinds Brook past the shelter (pic 12) and out to the edge. Taking straight lines across Kinder is a very slow job crossing the peat hags & groughs that can be very hard to get up and out of due to the slipperyness and often the boggy bottoms and with the heather on top it soon saps your energy. Pic 12 Since I'd got time I then meandered out and back a bit to cover a bit of the next days walk in case I didn't get parked where I wanted and had to use an alternate plan. It was then back to Grindslow Knoll but going over its top and then back the way I'd come up.

Having time to spare I drove up to Mam Nick & then down the Winnats which I think is on of the most spectacular bits of road anywhere.

Day 2 I managed to get one of the few free places at Nether Booth by the turn up to YHA Rowland Cote. From there it was a short walk up the drive before turning onto the field path that runs up Edale then turning off onto another path to get onto access land. It was then just a case of following light tracks on the ground up over a stile and up the final bit onto the edge.

At the top of Ollerbrook Clough one gets a view (pic 13) down and across Edale. A slightly different one (pic 14) above Nether Tor. And this (pic 15) was from my Lunch spot near the top of Grindsbrook. Pic 13 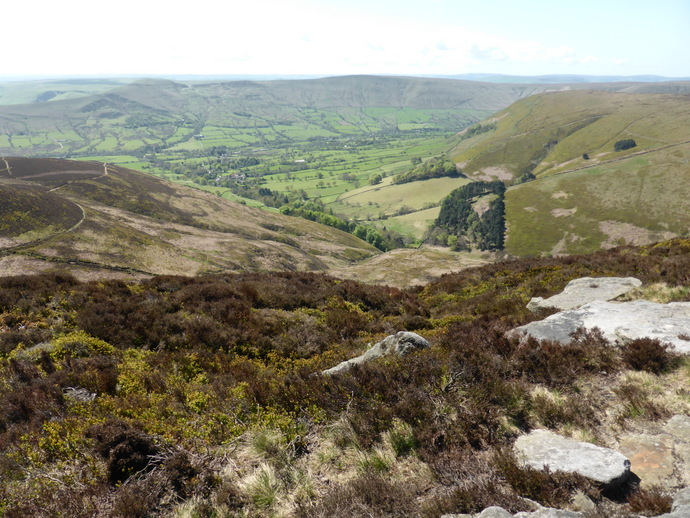 It was then onwards turning up stream at Grinds Brook to follow the route I'd come down on the previous day. After emerging out of the grough into the interior I came across this cairn (pic 16) which I think marks the furthest reaches of Grinds Brook but when I was there it was dry ground. This vid (https://goo.gl/Syv2y7) will give you a better impression of how featureless the middle of kinder is. Plus one thing to note is that current restoration work includes making small dams within the groughs to slow water run off, which will make things wetter & boggier. Continuing on back through the boulder field out to the edge and using GPS I found the 2p I'd left the day before and then continued on round clockwise. Above Seal Edge (pic 17) one sees Bleaklow & the Howden Moors with the snake pass hidden down in the dip. Slowly as one heads towards the eastern corner at Crookstone the undulations and twist & turns around large gritstone boulders give way to a fairly level easy going path & ones progress speeds up. Plus you get changing views including -

Alport Dale cutting into the moors from above Ashop Moor After rounding the corner - 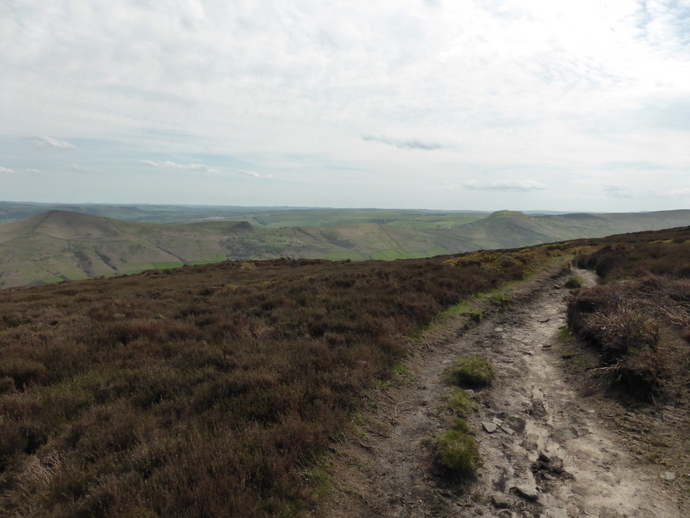 The upper half of Edale from Rowland Cote Moor just before I left the edge and stated dropping back down taking a slightly different way. 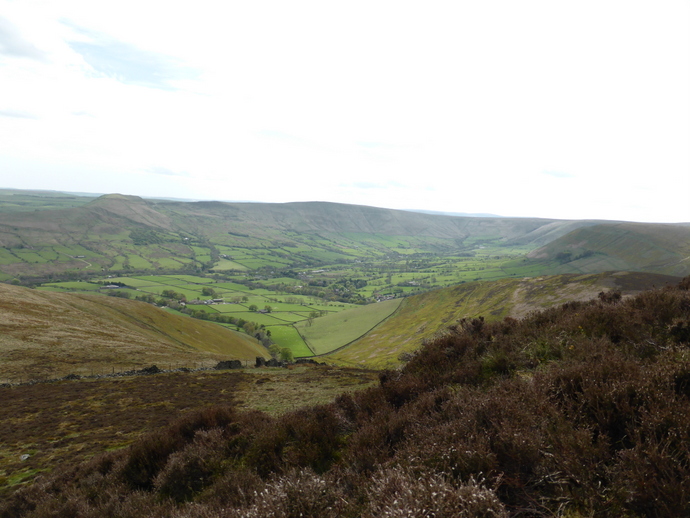