This was a chance to do this walk again having done it a few times before although slightly different variations each time, it's a nice one to fit in with its convenience to Sheffield and with somewhere both at the start & end for my driver to park and do there own bit of walking. It started with grey skies but soon turned into another fine morning with blue skies.

The start being off the main A57 trunk road provides a good place to stop and gather ones self together, rather than a quick stop & go drop off, that I've done from the main road before. The first part is a track through a framers field & then down to the main road, after crossing it you are out into moorland and initially you're heading up but on a wide slope so you don't see what's ahead but quite soon the edge starts to form and you're following it past the high point & trig pillar at High Neb, until you leave it to climb up again to Stanedge Pole before dropping gently to the parking alongside the upper Redmires Reservoir.

Although there is a good level-ish path along the edge it is just slightly back from the edge such that for the best views you are tempted out from it so there is more up & downs to go over, or twist & turns between the boulders, but thankfully being millstone grit I don't think there's a better non slip surface anywhere.

Pic 1 - The stone post marking the junction of packhorse routes at Moscar Cross. Plus the grey skies. 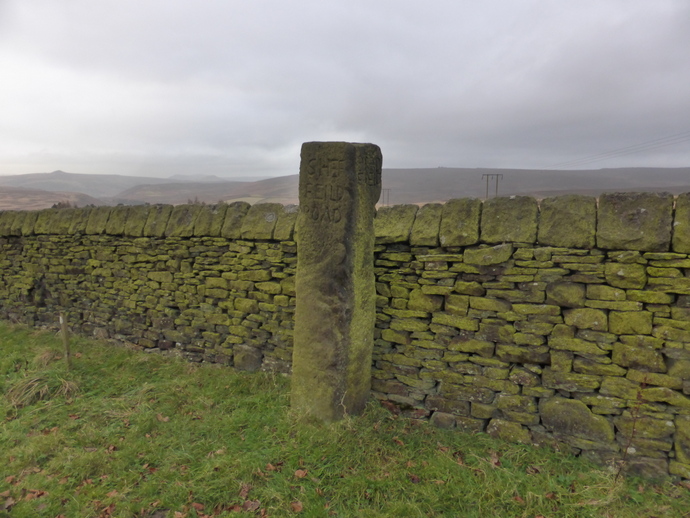 Pic 2 - After crossing the main road the path ahead rather cuts straight into the landscape. The skies are showing some blue now. 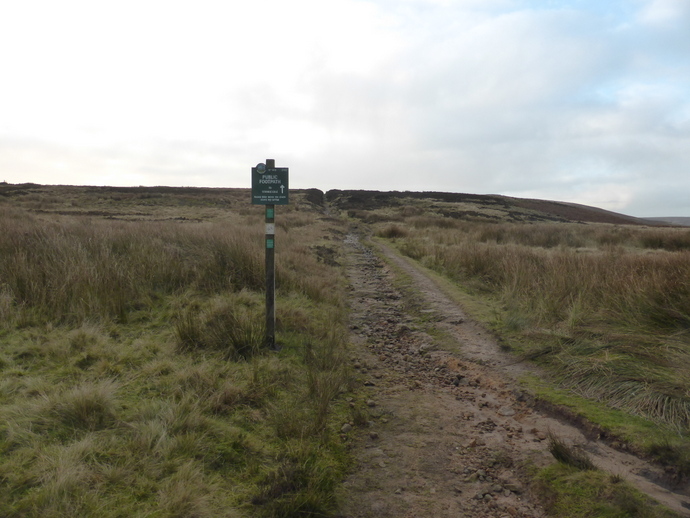 Pic 3 - The view out from Stanage End with Win Hill being the knob in the distance just up right of centre, a bit of Ladybower reservoir down in the valleys plus Kinder & Howden moors filling the far skyline. 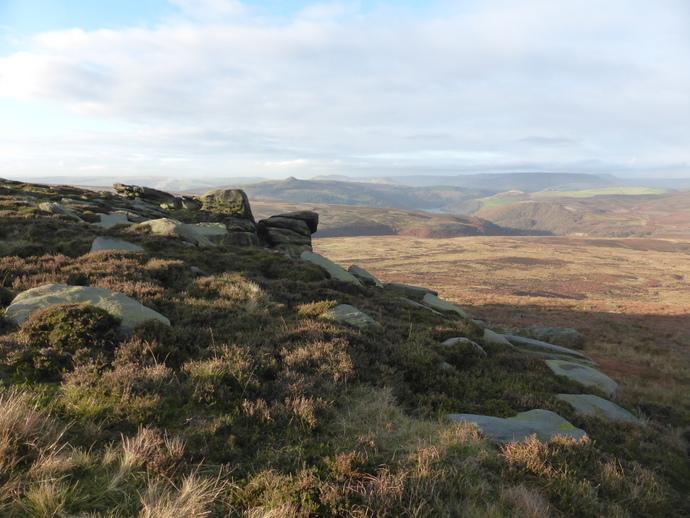 Pic 4 - Looking back at Stanage End 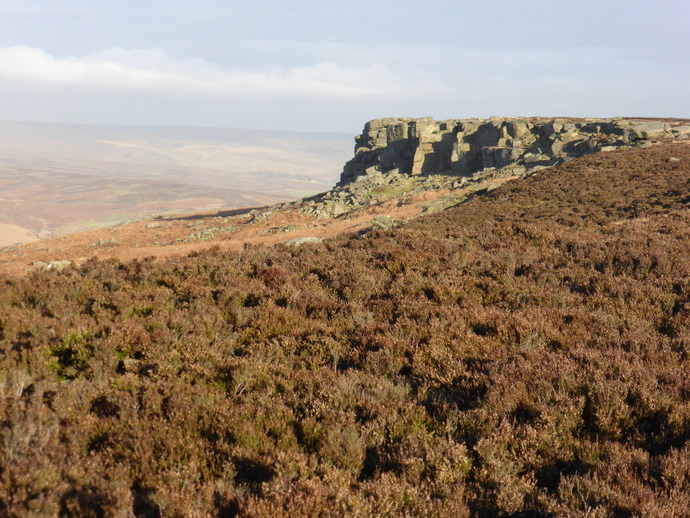 Pic 5 - From the same position as last shot, with a bit of zoom to enlarge Bamford Moor in the foreground a bit back Win Hill with Mam Tor behind and Lose Hill poking up near the centre all backed up by Brown Knoll leading up to Kinder on the right. 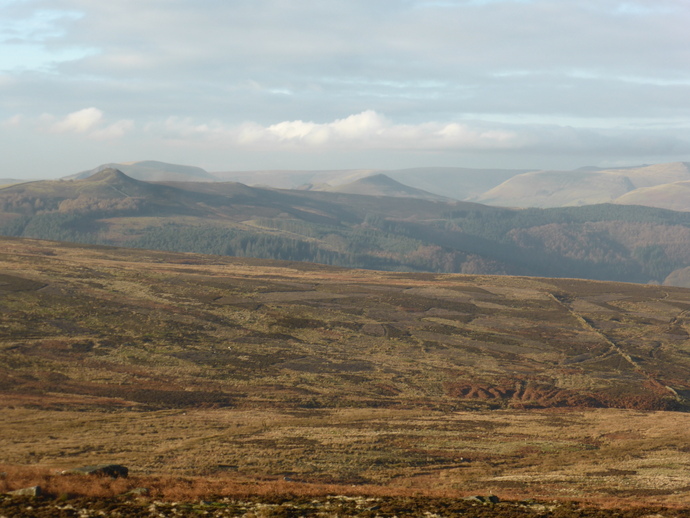 Pic 6 - Another shot looking back along the edge from near Crow Chin rocks. 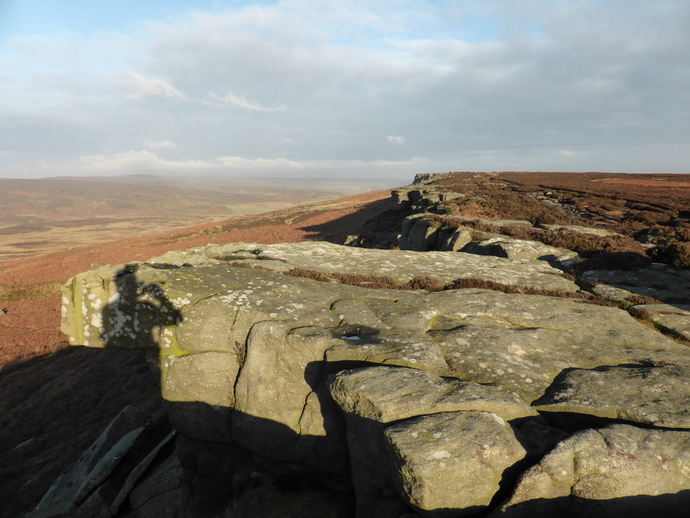 Pic 7 - The view out from just past Crow Chin rocks with the same suspects as before although as one has gone round the backdrop is more Kinder. 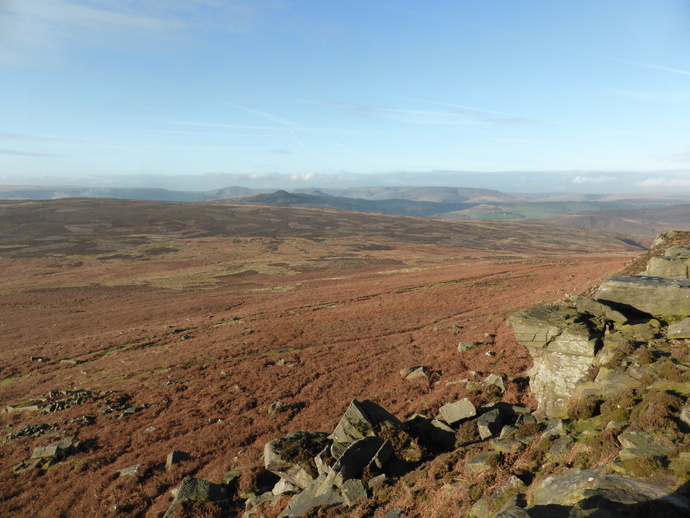 Pic 8 - One of the joyful problems of sunny mid winter days is the height of the sun, by this stage in my walk the angle round of the edge & height of the sun allowed this shot without to much glare, looking forward after just passing the trig pillar at High Neb. 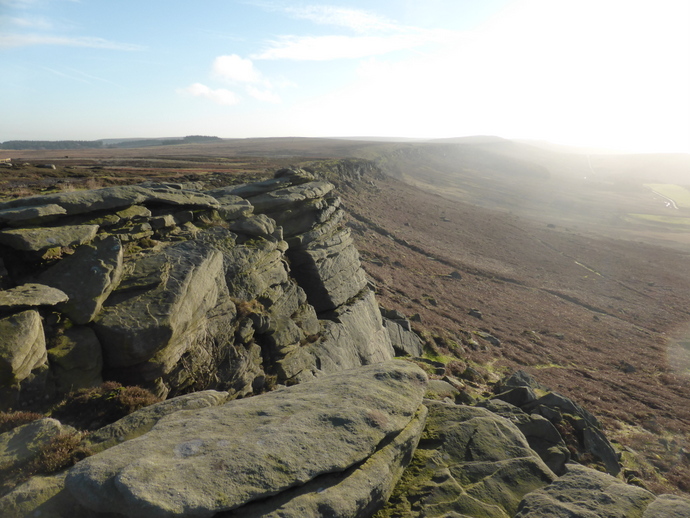 Pic 9 - From just before I turned away from the edge the view out over Bamford Moor & the clear blue skies above barring the typical bank of cloud hanging over Kinder in the far distance. 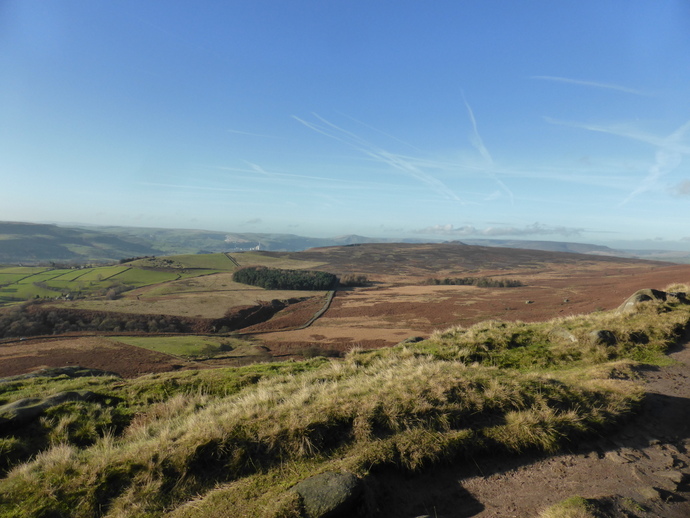 Pic 10 - A final look back along the edge to High Neb with its trig pillar a bright speck of white on top of it, after having stuck to it a bit longer, rather than take the way the major path goes and then gone round and up onto a bit of a rock promontory for that extra bit of view. 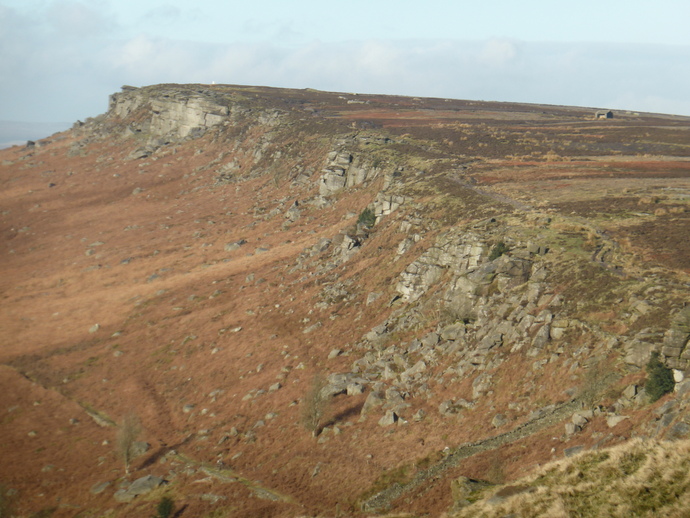 Pic 11 - The path the "Long Causeway" is an old packhorse/cart track that was obviously improved at some stage in history and the gritstone sets are worn down in the middle from the passage of hooves, wheels & feet over the centuries. 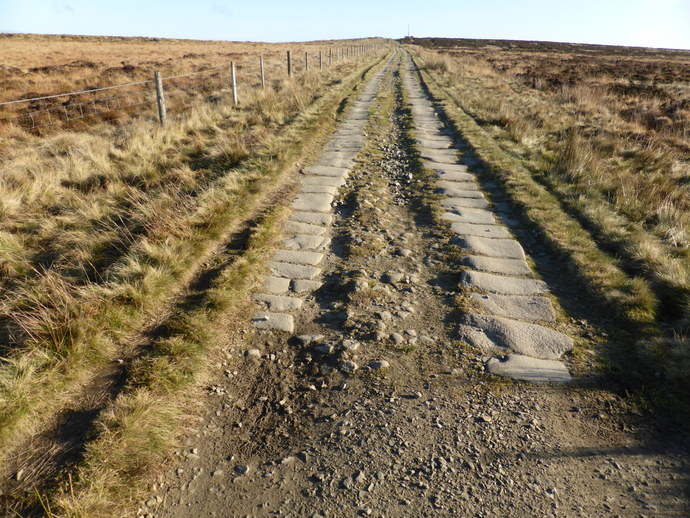 Pic 12 - Stanedge Pole standing tall on the skyline - if you're heading for it to bag the trig pillar shown on OS maps, good luck finding it as there isn't one. 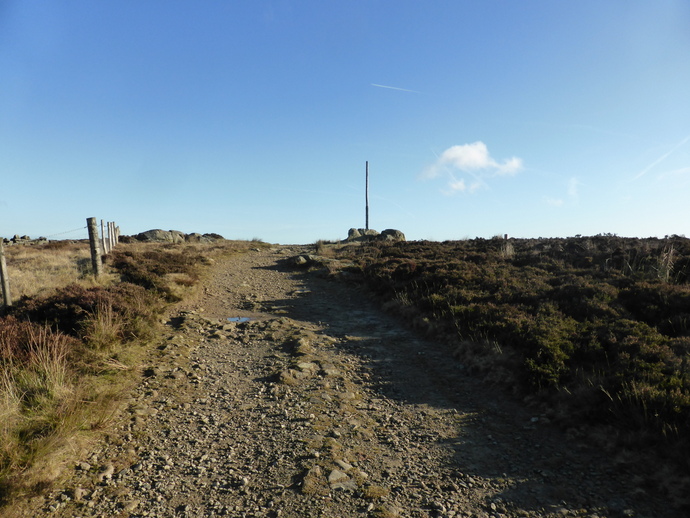 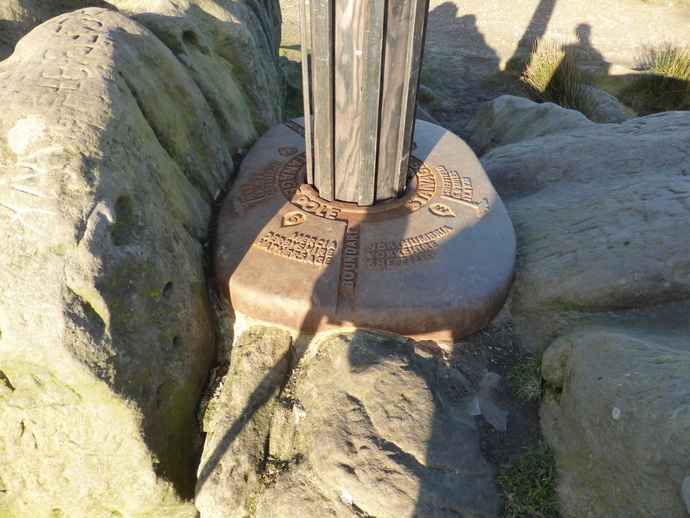 Pic 14 - the N & W side, the pole sits in a cleft in a rock formation and is the old county border between Mercia & Northumbria, now the Derbyshire Yorkshire boundary. 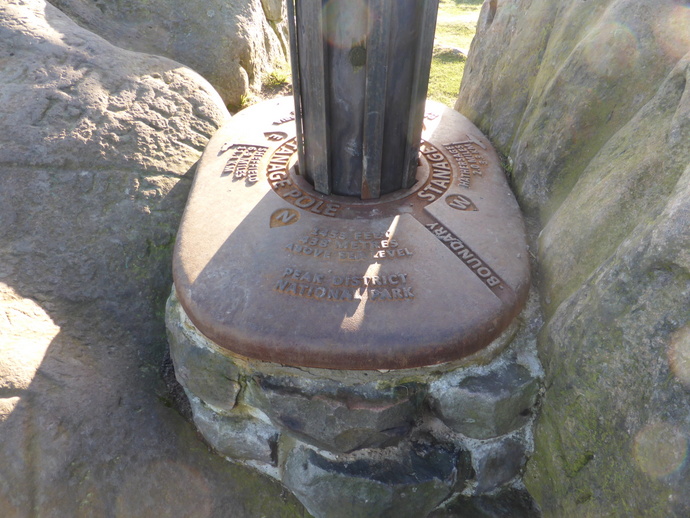 Pic 15 - Approaching the end of the walk with Redmires Reservoir showing, the Long Causeway was classified as a byway open to traffic and when I'd been here some years back this bit of the track had suffered major damage from the passage of 4x4's & erosion such that the track was 3-4 ft below ground level in places, it has now been closed to motorised vehicles and obviously a lot of repair work has been done. 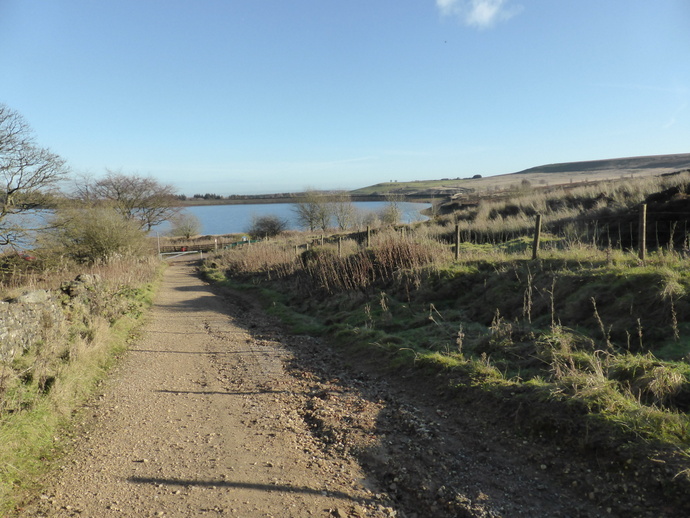