The main purpose of this trip to the peak district being to accompany father to the area so he could go off to an event gave me a chance to get a walk in. I planned this walk to be a bit shorter than most of my day walks because of the weather in this case being rather hot & sunny. Knowing the area & that normal ground conditions for a large chuck of the walk would have been wet & boggy the drought conditions I thought would make the going easier, which they did.

Plus although I'd lightened my load in terms of removing waterproof trousers, gloves & skipping a warm top from my rucksack that I'd normally carry on a full day walk, I did have the legs of my zip off trousers & a long sleeve shirt & lightweight wind/waterproff top in my rucksack & gaiters in case of long scratchy heather, plus I had added a bottle of sun cream that I used at my 1st lunch break to top up the protection I'd applied before I left.

And after reading Mike/Lancashire Lads last post and comment about water consumption I took just over 2l with me which was totally fine for me, but did drink down as per normal about 1/3 to 1/2l before setting off, although I didn't need the extra that I always have ready at the end when I get back to my vehicle.

The start & end was Langsett Barn car park which for sunny days & in general is good as it offers dappled shade, free parking, picnic benches & toilets.

Starting off I was soon out of the trees & near the shore of the reservoir which was looking low unsurprisingly. It was then onto a bit of road walk along a pavement on top of the dam where Pic 1 was taken, showing the still waters & the moors I'd be walking along as I rounded the reservoir at distance. 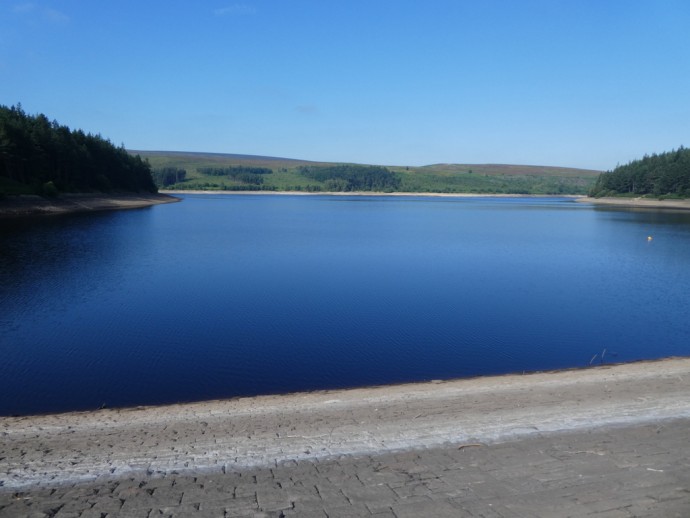 On from there it was climbing up on the road before turning off and then back down through trees to near the waters edge before starting to climb up & away from the reservoir with open moor one side & conifer plantaion the other. It was on this stretch that I came across what one dosn't want to see and that was 2 cases of dog mess bagged but left. Approaching North America (pic 3) which is a ruined farm the track (pic 2) had a nice length of man made surface in the form of setts. 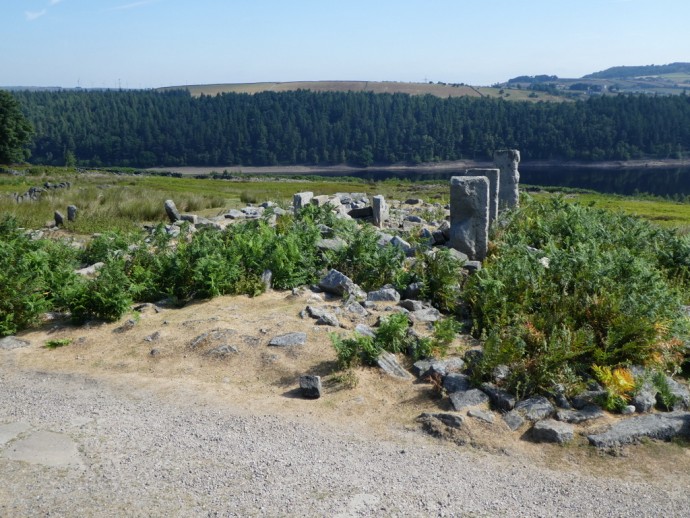 As one gained elevation the view opens out more (pic 4) over Langsett reservoir to the higher land beyond. 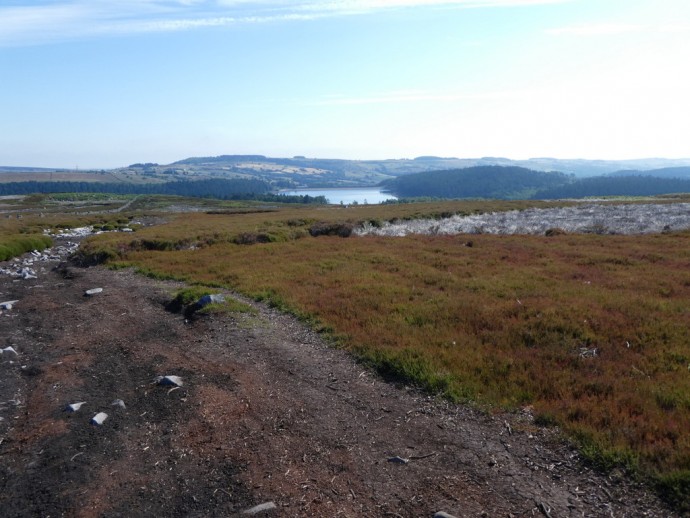 The path then joins into the main Cut Gate track that goes from Langsett over the top & down to Slippery Stones bridge over the Derwent river at the top end of Howden & runs along Mikleden Edge (pic 5) giving a north facing view. 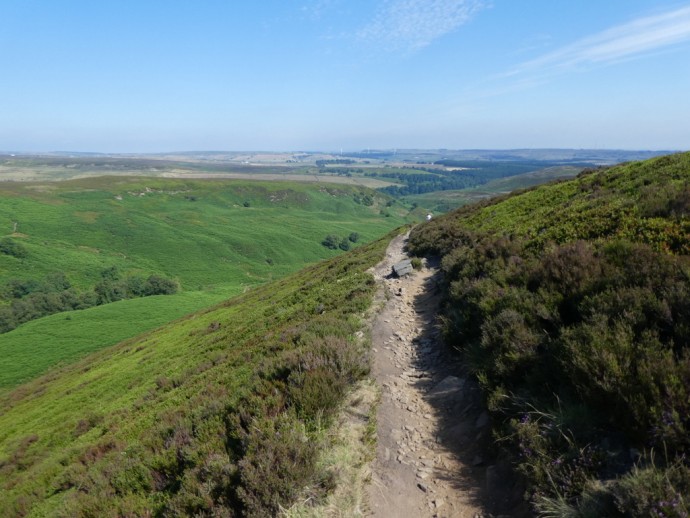 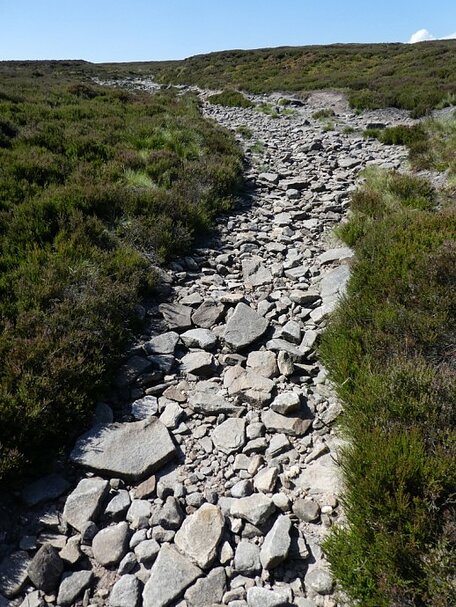 It was then onwards towards the high point on this path marked by a large cairn (pic 7) that is also marking a X-roads of paths. 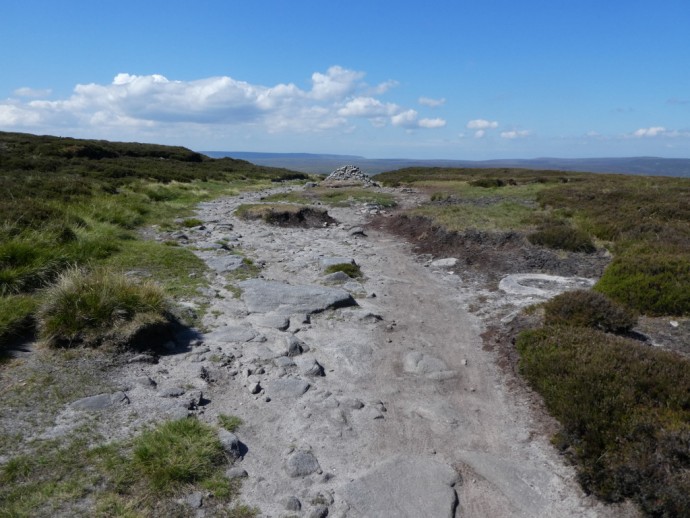 At the cairn I went of to the trig pillar on Margery Hill which is pretty much the highest point around and therefore gives a good all round view (Pic 8 & 9).

Moving on it was pretty much back to the cairn the way I'd come then straight across and following the minor path along the top which if followed far enough goes to Bleaklow Head but I followed it only to the trig pillar at Outer Edge beofre turning off onto a very minor to sheep track type way to the Crow Edge Stones which stand up & draw you to them. From there one could see down a reasonable length of the Derwent valley to the reservoirs of Howden & Derwent and it's the Derwent dam that is famous for being where the dambusters practiced back in WW2 although they are only just visable (pic 10) ¾ of the way up in the middle. Plus (pic11 & 12) a couple of pics of the wind & grit sculpted formations that make up the whole gathering there. 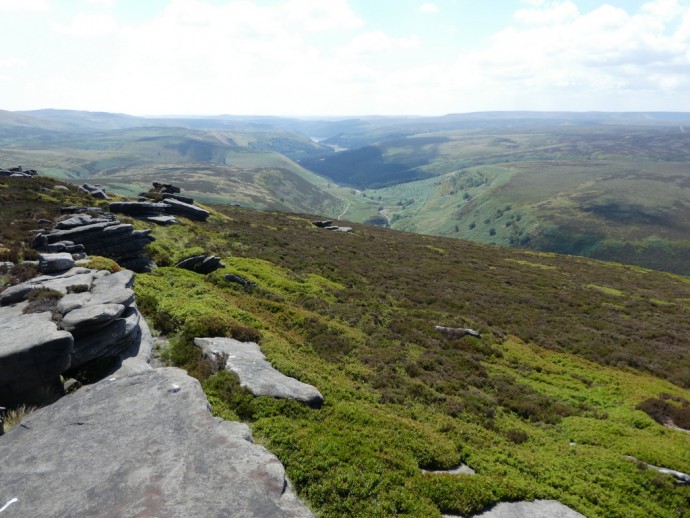 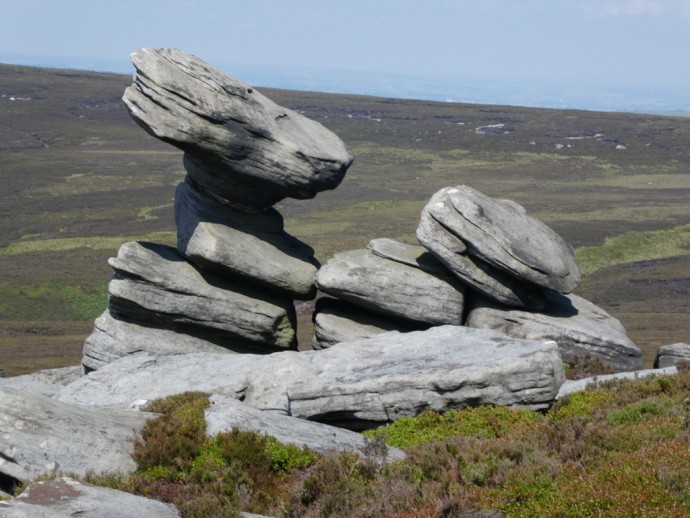 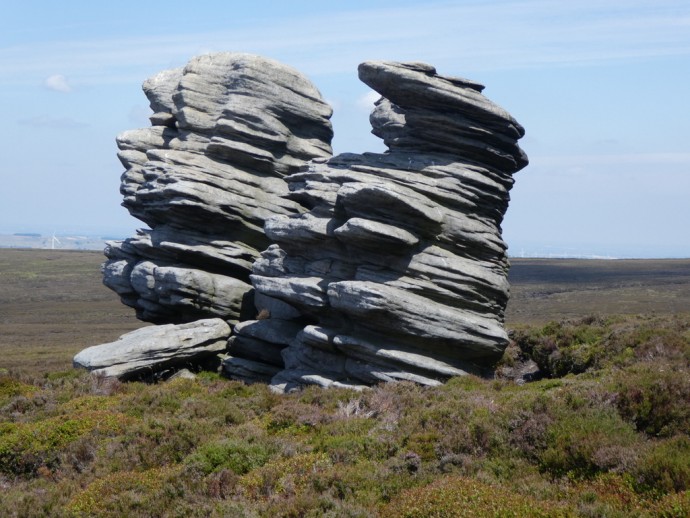 from here there was a bit of a path that went on but I'd guess it goes on round to Horse Stone Naze but I didn't want to head that way so cut up cross country back to the main in relative terms path along the top.

Reaching Featherbed Moss & all good hill walkers should know that a Moss on a map is usually boggy, but this time the peat was dry & craked (pic 13) and whereas normally if you stabbed you walking pole down onto peat in such an area you'd expect it to go into the surface this time the spring shock absorber in mine took the impact. It also made the restoration efforts to stop erosion through run off seem more like some odd horse jump course. 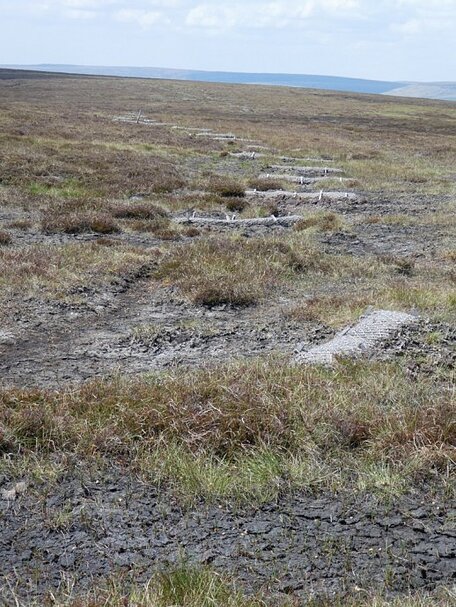 Reaching the lonely cairn that marks a crossing of paths (pic 14) the thought crossed my mind that people must have either picked up the only few stones around to form it or purposfully caried them to build it. 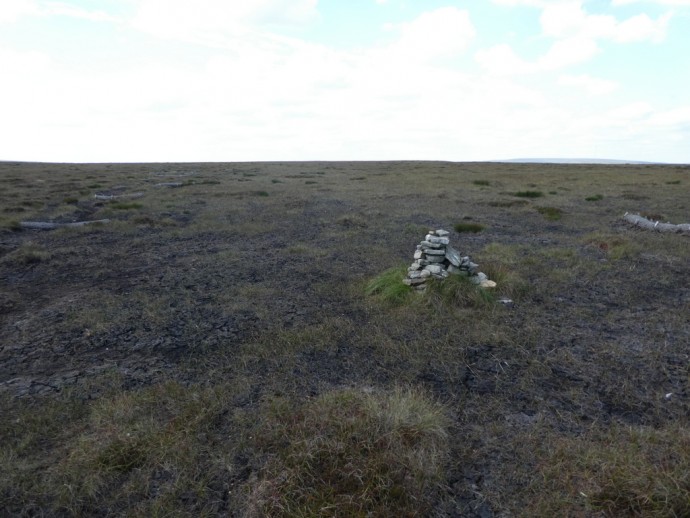 With it being so dry it was easier to walk in the bottom of a clough (pic 15) whilst it was going in the right direction rather on the top of the hags whilst going off path, until I reached the quad bike track (pic 16) that was coming up where I was going down & where the views started to open back out. 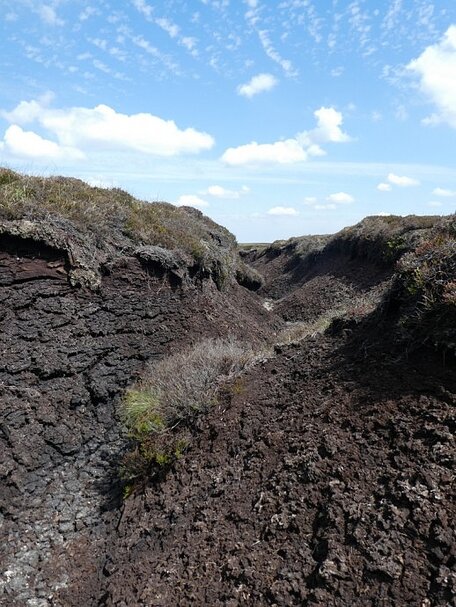 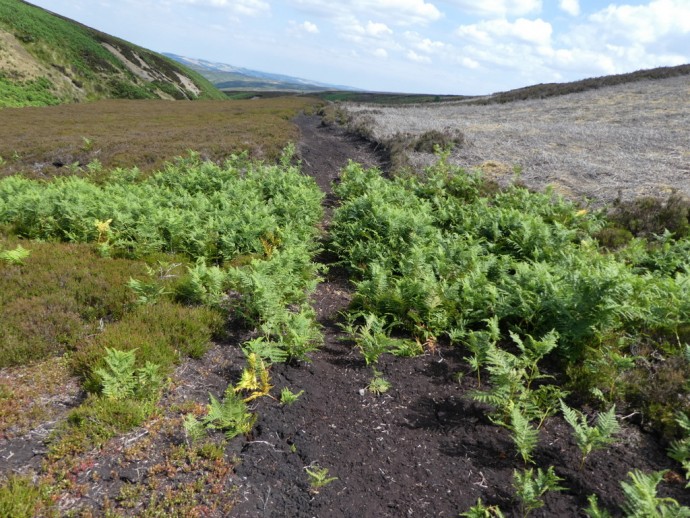 From here there was a track/path to follow although at times just for the pleasure I did walk in the stream bed of the Porter or Little Don (pic 17) and for wetter times there is a bridge for a crossing of the stream where paths diverge. Plus heading on down I came across a most magnificent sheep fold (pic 18), on a bit more and the widening stream was crossed by another of there pole & plank bridges (pic 19). 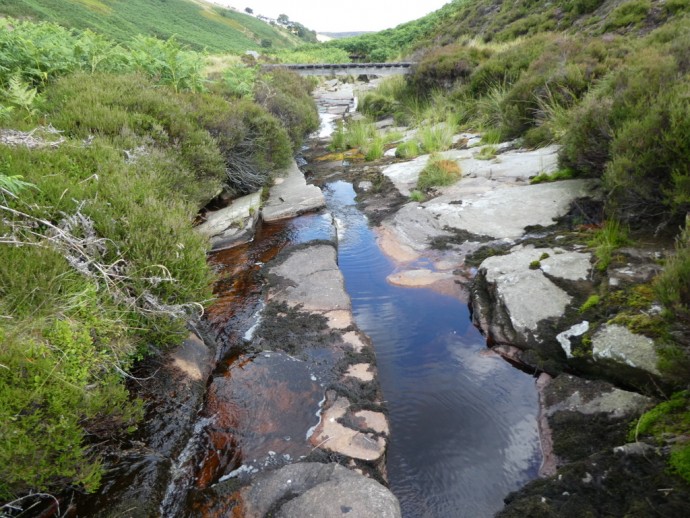 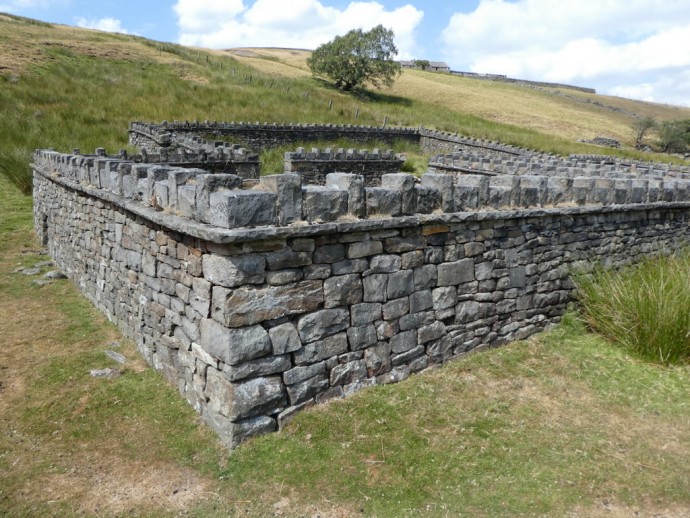 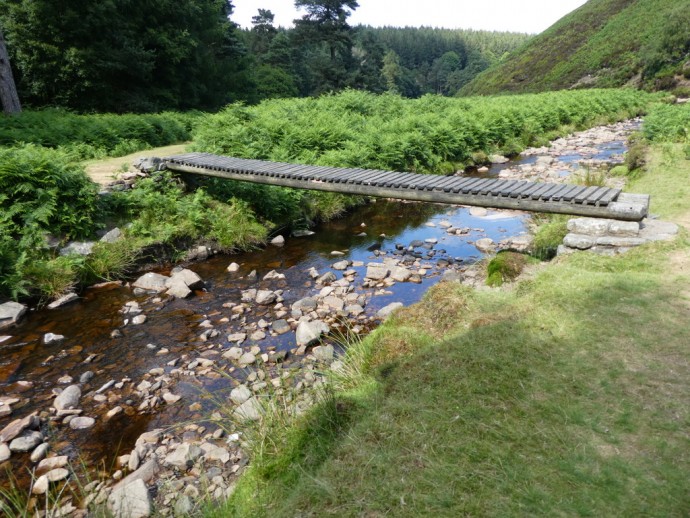 Now approaching Langsett reservoir there was evidence of a change of course of the stream with it having filled in a bend & made a new cut through (pic 20). Then at the weir a new fish ladder (pic 21) had been built although it was bone dry. 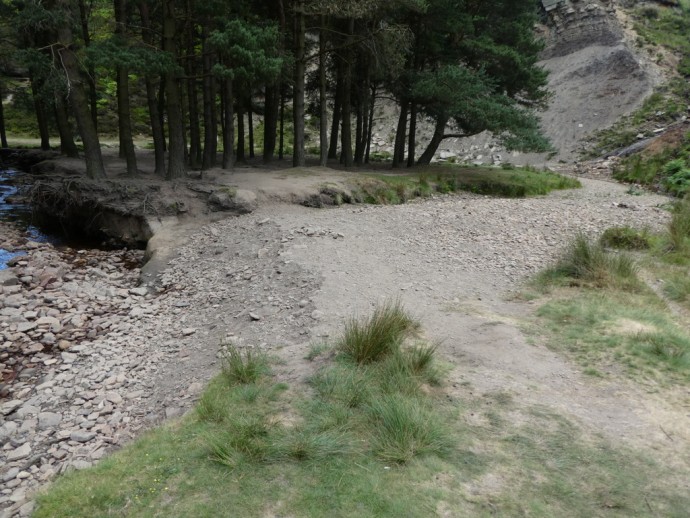 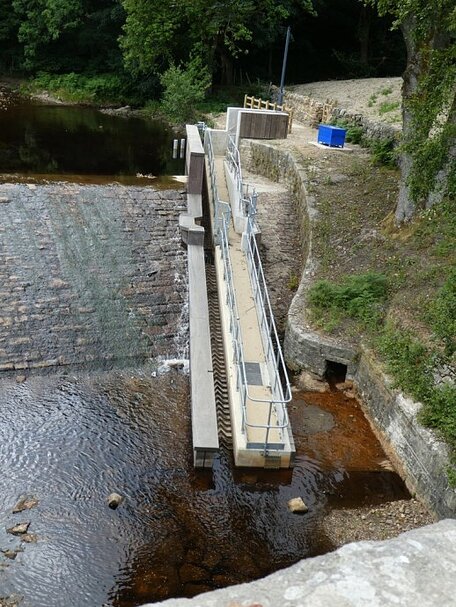 From there it was an easy stroll along a track back to my start point. By time I arrived at the end my legs had also acquired an extra layer of sun protection in the form dust stuck to the liberally applied sun cream.