Ladybower to Glossop on the moors

I was back in the peak district with my driver so had a chance to do a one way walk, my basic route was from the side of Ladybower reservoir near the Derwent Dam up onto Alport Moor then follow above the river Alport upstream onto Bleaklow, to Bleaklow Head, Down the Pennine Way to near the Snake Pass, taking the Doctor's Gate path to Glossop.

The day started fine for me with sun & blue sky but only nippy Dec temps, the water levels in the reservoirs were looking lower than I'd seen them in many a summer despite more recent wetness, as can been seen in Pic 01 - taken from the start car park (Pay & Display) looking NE over some of Ladybower reservoir. 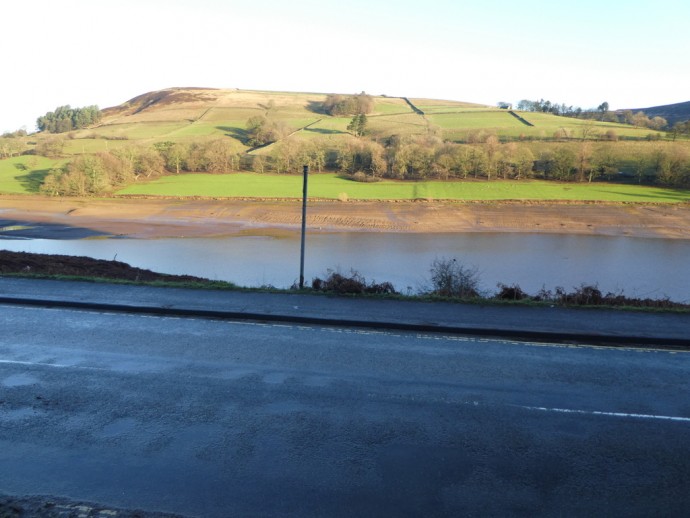 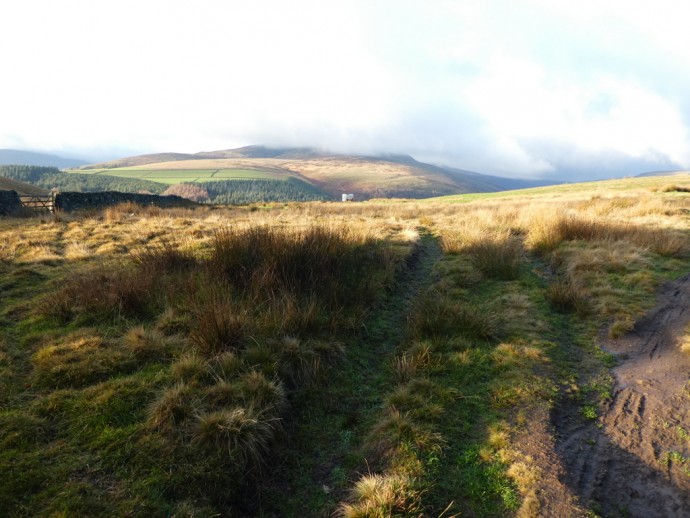 From the car park it was up a track that comes down behind it up through the forestry plantation to the ridge where Pic 02 came from just at my joining point looking roughly WSW at the Crookstone corner of Kinder with the cloud down on its top, my route ahead is the track disappearing right from the bottom right. My driver went trough thick cloud on the Snake Pass after leaving me. From this point its pretty much straight NW for the next 5 ½ miles as the crow flies but with the odd jiggle when walking.

The track follows the ridge with initially the forestry immediately on your right, through rough grassland at first, but as you leave the forestry you start climbing up a hill & the ridge fades into a broader expanse of moorland but you are nearly following the highest ground all the way to the Trig Pillar on Alport Moor. The top of the "hill" ie the moor that you come onto is Rowlee Pasture & typical of the peak district a pasture is just a large level area & when you are up on the moors don't expect nice green grass on them, Pic 03 is more typical wet brown rough grass although having a flagged path made for nice easy going, no sinking into the peat & although the flags are a hard surface the slight unevenness seems to roll you around enough to prevent the aches that I get walking on roads. Also across from me at middle distance I could see large chunks of whiteness on the moor, but it was just one of the largest quantity of the white builders bag that they helicopter up for restoration work that I've seen in a confined area. 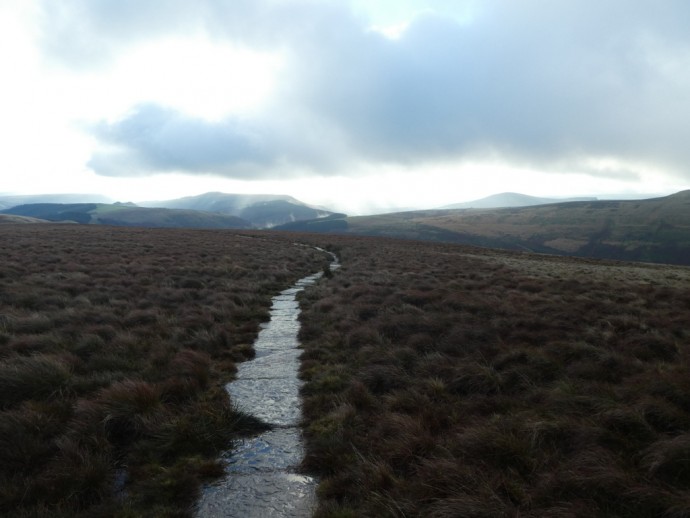 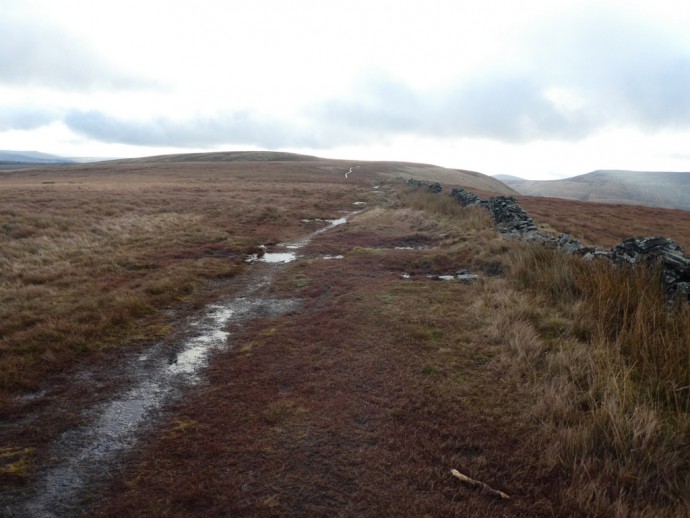 Around where one crosses onto Birchinlee Pasrture the path changes to still flat & smoothish but now soft & wet as the flagstones end (Pic 04- looking back) it's also around here that one has more of a sense of walking alongside Alport Valley. The next and one of the few major fixed points on this walk is Alport Castles a large area of landslip, the castles part comes from the fact that several of the formations of mud shale are supposed to resemble them. Pic 04 is just as they start & Pic 05 8 min further on is the main one called The Tower (pic 06) that looks like an old Motte & Baily Castles. Plus Pic 05 has that mysterious figure who I often see on my walks called Shadow Walker 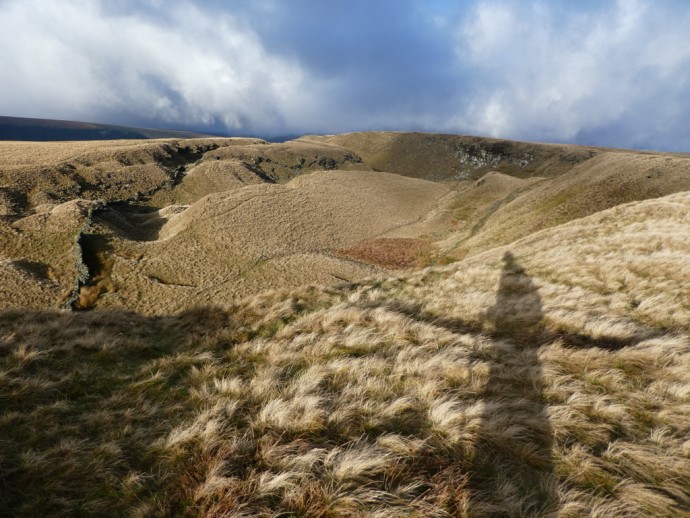 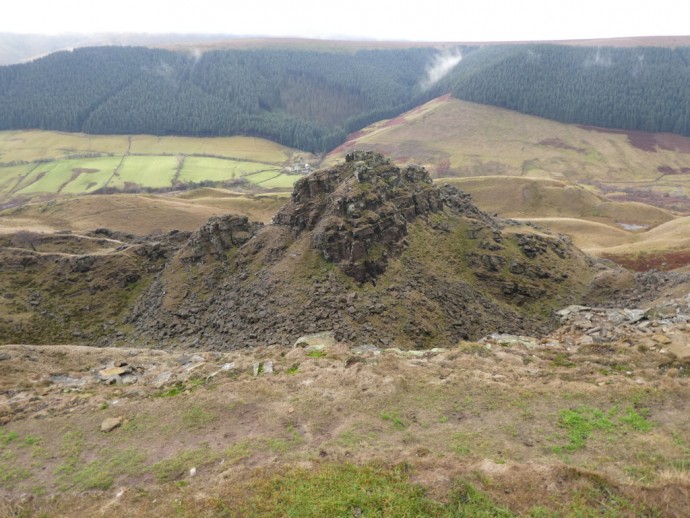 At the Northern end of Alport Castles I was walking alongside a stone wall that I didn't think to much of until it ended & I was hit by the full force of the wind that made things really chilly so that I resorted to adding my wind/waterproofs over the multiple layers I already had on. The valley to my side was also narrowing down to a deep steep side thing with the river still just winding in the bottom (pic 07). 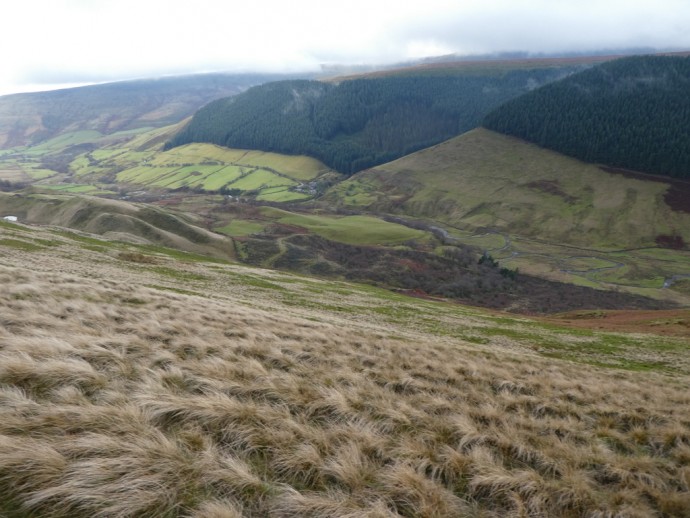 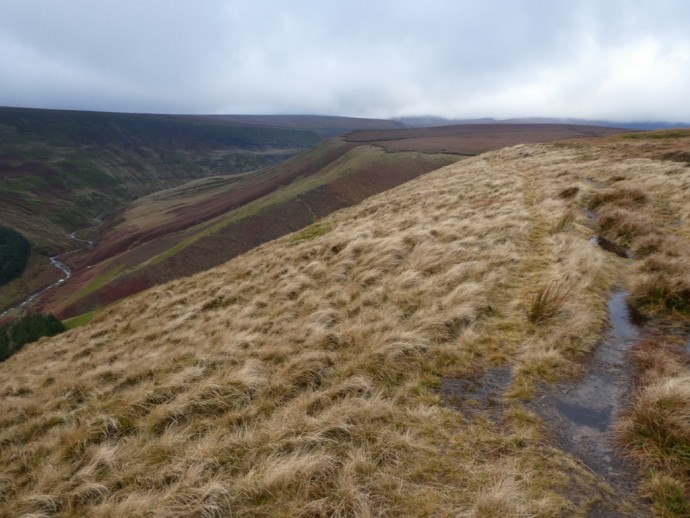 Pic 08 came another but further on just as the forestry both sides of the valley below was ending and shows the valley narrowing further as it heads up into the bleak moorland and the path is still clinging to the top edge. As one heads on the path goes straight on as the valley curves away from you for a bit as you head for the trig pillar on the "heights" of Alport Moor, basically the pillar is in the midst of the moor sitting in a bit of more eroded ground that catches the water. Up on this bit of moor my chances of walking without getting wet boots were zero.

From the trig pillar my route bent slightly left whilst across from me the valley was completing its bend & heading back towards me until you meet up again. Just as they meet there was a small tributary Glethering Clough coming in & as I dropped to cross its stream finding that it's was about lunch part 1 time & more sheltered I stopped for a bite & to top up water bottle in pocket. 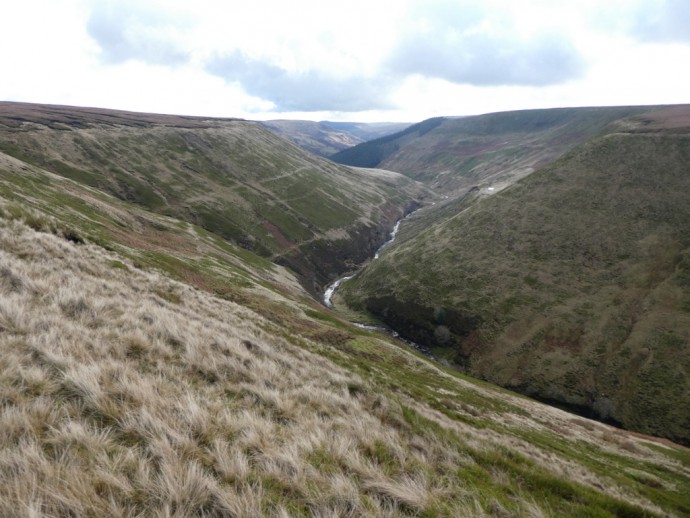 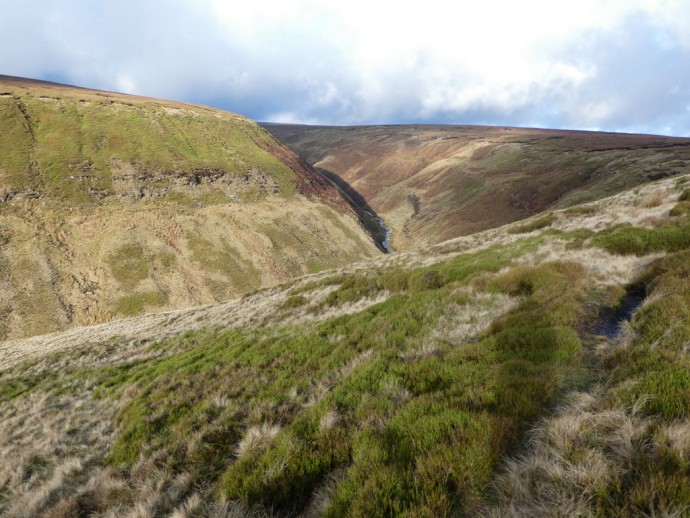 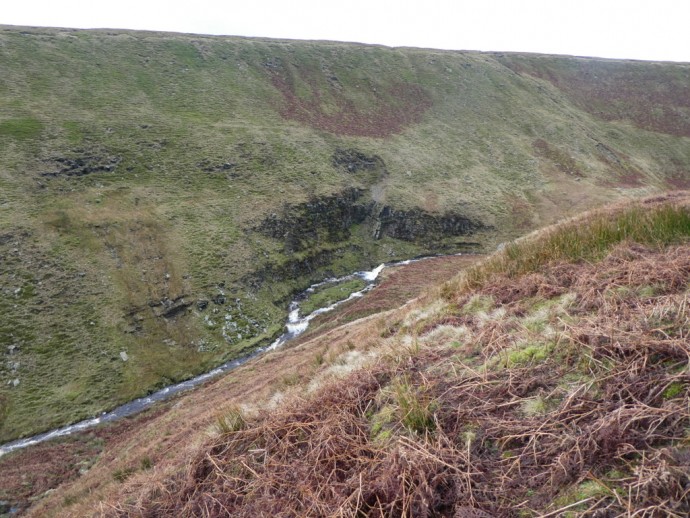 Pic 09 is again looking back down Alport Valley from opposite Nether Reddale Clough and shows more the narrowed valley & by know the river becoming more of a stream with white water. Pic 10 is looking forward from opposite Upper Reddale Clough. Pic 11 looking down & forward having passed Mirey Clough at the falls marked on the map and the gorge like valley. At this stage although ones still following the top edge of the valley the moors to the other side are becoming more hilly. 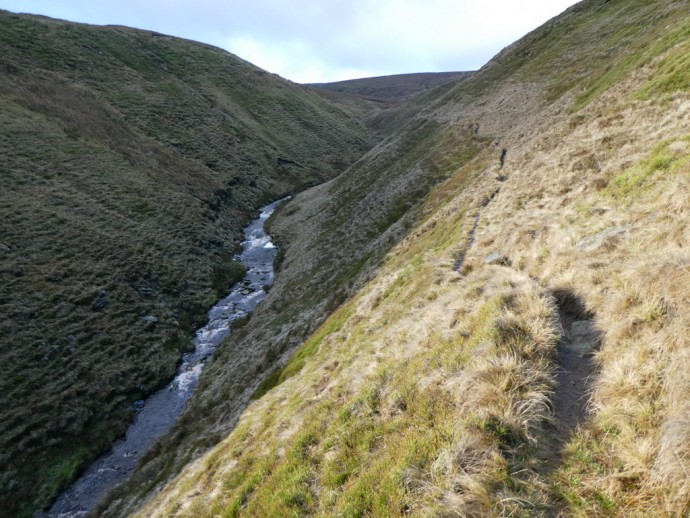 Having gone on more you now are starting to slowly drop down to river level as you go along the side of the valley & the depth of the valley lessens.

By this stage the cloud had totally lifted off the tops to leave them clear, although this late in the year the low sun meant there was plenty of shadow from even low hills. I'd also passed through what's called The Swamp on the map, although it wasn't that bad it's more just a wet area of peat where multiple tributaries converge & started on a bit of an slope upwards along Hern Clough that had helped dry things out under foot. I then came upon a gate in the fence with a notice on i's back side for me, that brought a bit of a smile to me (pic 13) but depressing if you are doing the Pennine Way. 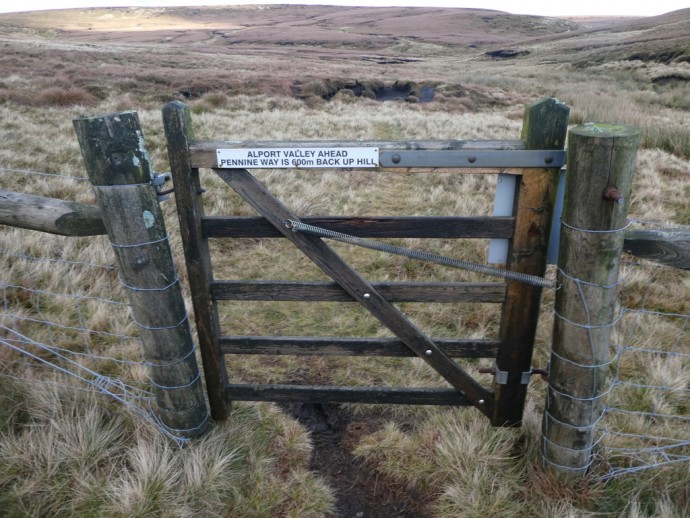 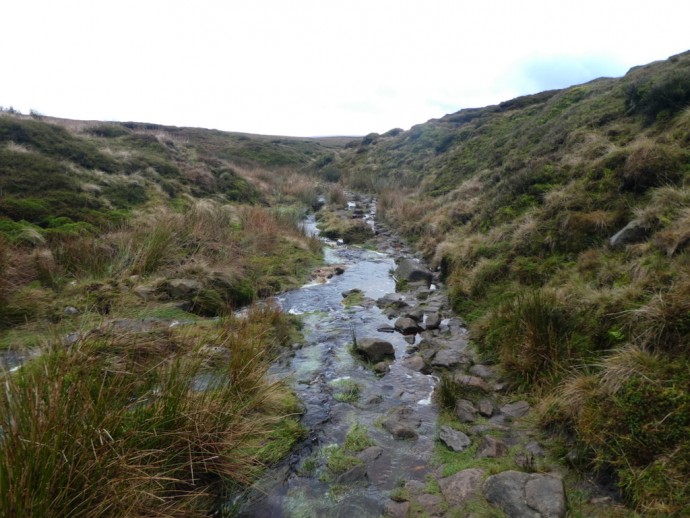 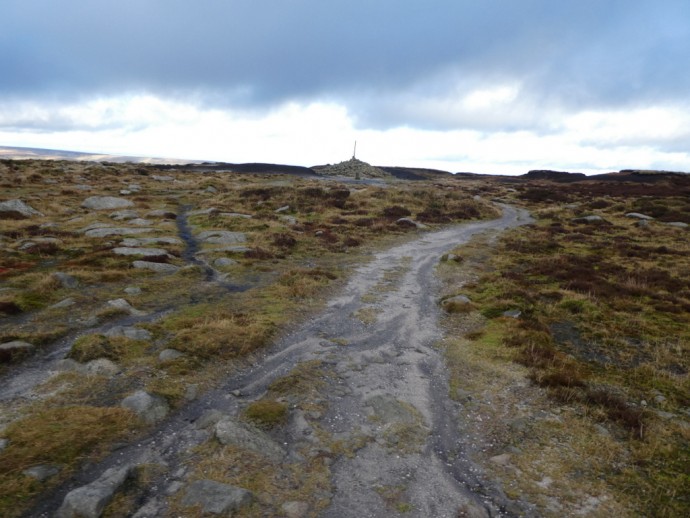 From Bleaklow Head as I was doing OK time wise I wandered across to have a look at the Wainstones before coming back towards the pole & heading South back down the Pennine Way towards the Snake Pass. One thing noticeable was that on Bleaklow the more energetic walking round the deeper water bits & up & over or around boulders and down in a clough meant things were much warmer & I'd reduced layers. The path down was a mix of that pictured before & just described plus flagged, the sandy gritstone & more cobble bits, following a clough & drain down & with marker stones with weathered yellow painted arrows. When I emerged from the shelter of the clough onto the more open ground approaching the Snake Pass the wind was noticeable again. For me with the Snake Pass road in sight I then turned right onto the Doctor's Gate path which is an old packhorse route and showed signs of old engineering where I turned (pic 16) towards Glossop. 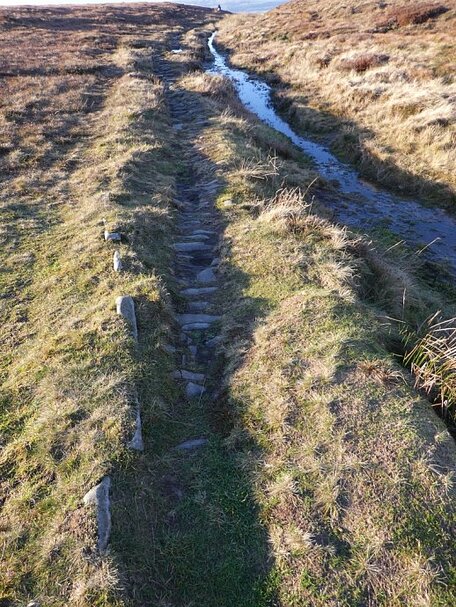 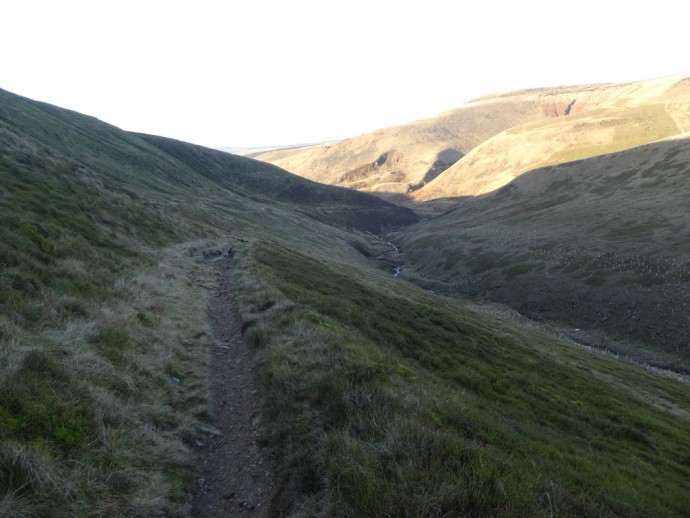 From here the path initially descended gently until it started dropping with twists & turns and odd sharp drop into the Shelf Brook Valley. Pic 17 came looking ahead around where I crossed Urchin Clough valley. Once I was in the valley I found that the wind was being funnelled up the valley directly into my face and with the sun lowering in the sky I was in the shadow so it was cold even with wind/waterproofs back on. From here the path slowly dropped down to the Brook & then crossed it on a wooden bridge. One notable thing was the hundreds of trees that had been planted. As the valley widened out the path became a farm track and approaching on the final stretch into Glossop a popular route for dog walkers as after seeing only a handful of people all day and none on the moorland stretch it was a bit of a stream coming the other way.

One thing to note is that despite the Doctor's G path (bridleway actually) being marked on OS maps as a Roman road there was a notice board at the end saying that this wasn't true as it was to narrow & overlooked to march soldiers along and was just a packhorse maybe cart route.