I've said elsewhere that I really like your new WayMaps mapping, which I think is pretty much on a par with OS.

Just been browsing (when not logged in) and noticed a couple of things which I would like to see, and thought it worth a mention, to ask if these may be possible to implement. These are just personal musings, so just throwing them out for comment. - I won't mind at all if the answers come back as No - No - and No.

I greatly appreciate the fact that the WayMap mapping shows only paths, and not Rights of Way. On OS Maps, Rights of Way often bear no relationship to actual paths on the ground, and I find having them emblazoned on OS maps is more of a hindrance than a help when trying to follow paths that actually exist in the real world.

To me, in that respect, the Waymap mapping is much better. However, the black dotted line path symbol on the Waymap mapping is not very distinct, (certainly in areas where many crags occur such as the Scafells area etc.), in comparison with that of the OS maps. I was wondering whether the Waymap paths are on a dedicated "layer", and whether they could be made slightly more bold, or perhaps an option for making them more visible might be feasible, that could be made available for use only by those who wanted/needed it?

The zoom facility does not facilitate zooming-in to the same extent as does that when using the OS Maps when logged in. And I can appreciate that this might be a conscious decision in the interests of the website. But would it perhaps be a viable option to provide this WayMap mapping with the same level of zoom as the OS mapping, when actually logged in, as an alternative option to the present OS mapping? I note you have mentioned a WayMap option elsewhere, but don't know whether the zoom issue might be unachievable, or indeed whether having Waymap as an alternative for registered site members would be a viable option at all.

OK, we were discussing this only a couple of days ago, not least as a result of your previous feedback (and from others elsewhere). The general opinion is that the WayMaps tiles are very much liked by users so we've got plans for those beyond what we created them for originally.

The main one is that there already is, as you suggested, another zoom level in existence which is equivalent to 1:25,000. We created that to help with generating static maps in our walks when a walk step covers a short distance.

At level 9 the paths are much easier to see even in "busy" mapping areas like on the top of Scafell Pike. Here's a screenshot which illustrates that: 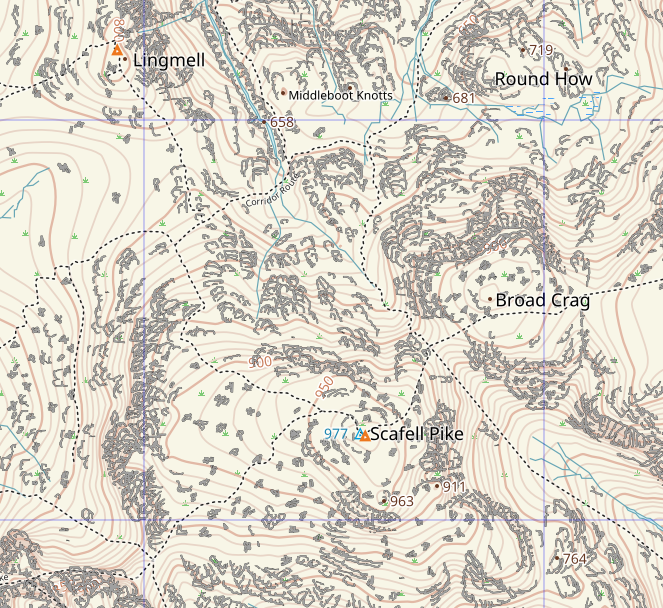 So our plan is to make WayMaps available when you are logged in with that zoom level available ... which is pretty much exactly what you were suggesting.

Now there is a catch to this: one of the things I really like about using Bing tiles as a user planning a walk is the ability to toggle on and off the aerial photography. When you do that the photography is zoomed to exactly the same amount as the map so you can see exactly where a path runs. Unfortunately this won't be true if WayMaps and aerial photography are being used together. They're not only not the same exact scale but they're differently projected (Bing mapping is crooked relative to the OSGB grid as I discussed recently here). So the best we're going to be able to do is centre the map and the aerial photography at the same point, zoom to the nearest resolution, and re-project and tracks or routes and the red marker, if you're using that, into the correct position on each set of tiles as appropriate.

The other thing which I'm actually working on now is the ability to show all tops of a type on the map (be it WayMaps or Bing). This would be a bit like the OS Benchmarks layer, so you could turn on Marilyns say and all of them would be shown on the map with a marker much like the Wainwright markers on WayMaps now but with the difference that, just like the OS Benchmarks, they would be clickable and would show a popup if clicked with information in like name, height, classification(s), grid reference and a description of the summit e.g. "rock about 4m W of cairn".

So that's pretty much everything you're asking for I think; are you psychic or something?

That all sounds just about perfect!

From your screenshot I would agree that paths on WayMaps do become easier to see at that additional zoom level.

I appreciate from what you say that there will be a slight anomaly between WayMaps and Bing satellite projections, but if the OS Maps - Bing satellite view remains as per the existing set-up. with WayMaps as an alternative option for registered members, then (certainly for me) that slight projection "catch" would pose no problem at all.

I think if one could go to zoom 11 on the waymaps & put the selector for the 3 different formats all together where the aerial box is things would be even better.

It's worth mentioning that zoom 9 on WayMaps is already more zoomed than zoom 9 on Bing (400pixels/km v 360pixels/km) but given that zooms 10 and 11 would add no more information, but would create a big problem for in terms of time taken to create and upload each revision to WayMaps (both of which increase exponentially with zoom level) that's not something we're keen on.

But you're dead right on tile layer selection. Aerial is just another tile layer and all three should be together: either as radio buttons along the right hand side of the top bar line (although I'm concerned about the real estate there - especially on mobile) or as a pull down menu option.

With regard to the tile selection how about a 2 section drop down from hover over box, working the same was as the current tile & layer selector in the menu, from the top right corner with 1 section for the tiles, the other for the layers this would give easy access to those things that one may switch back & forth between when working with a map and also room for any future expansion of either. Although this is from my desktop use point of view & I understand but tend to forget about catering to mobile use.

With the maps I wasn't after more detail or resolution, it was more matching the bing/os zoom at the top levels, I know I can enlarge the image by zooming the browser window and it was more the equivalent of this that I was thinking off, but obviously not if its to much work.

Right, we've added tile selection radio buttons top right if you're on a desktop but we've also retained the original tile selection options in the menu so that they're accessible on touch devices. See screen shot below: 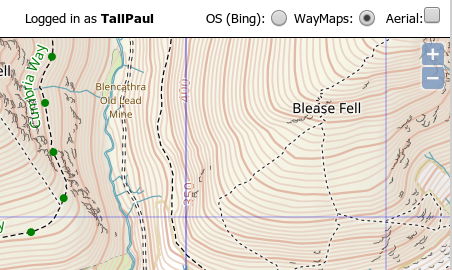