I was just having a look on your GPS mapping at my uploaded GPX file for my Buttermere Walk last Thursday.

I noticed that the statistics shown differ greatly with respect to ascent, when compared to the data given by my Garmin GPSmap64s, which was used to track the walk. 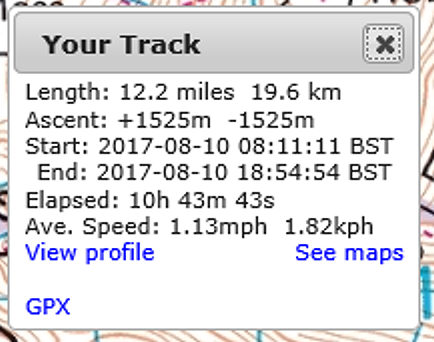 My GPSmap64s stats, (via Garmin Basecamp software on the computer), show: - 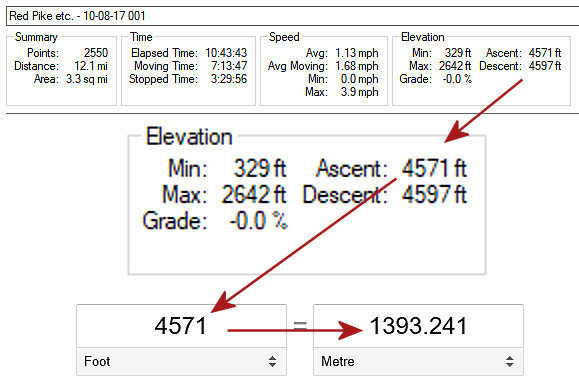 I've checked for the maximum height shown during my walk, which would have been High Stile summit at 2647ft., and my stats, (as can be seen above), show 2642ft. (So I know that my device was pretty accurate height-wise, on the day).

I don't understand how the uploaded GPX file, which contains all the specific "embedded" stats of the route walked from my device, (i.e including 1393 metres of ascent), should show as 1525 metres here?

Are your stats derived from plotted map heights relative to particular points on the track overlay and not directly from the uploaded GPX file?

Or if not, do you have any thoughts on what might be the cause of the differences?

You're right, we don't rely on the elevation data in the GPX file. I've written about this before however on that occasion the user's GPX was claiming a greater elevation than us.

I am slightly surprised we came out higher than your GPS, it's normally t'other way around so I'll pull a copy of your GPX file off the walk report and take a look at it just in case.

From looking at your linked posts, it looks like there's no method of ensuring accurate height details either way, so I'll just stick with reporting ascents as per what my GPSmap64s says.

I'd be interested to know whether anything shows up if you do have a look at my GPX file.

Just for information: - I walked through the Buttermere lakeshore tunnel on that walk, which resulted in a short loss of Satellite signal and gave a few spurious GPX track points at that location when I'd got the track onto my computer. - (It looked as though the GPX track had locked onto the nearest section of road in the vicinity).

I simply deleted the spurious points from the track, back to the points at each side that I knew to be correct. - They were all on pretty much level ground and shouldn't have affected overall ascent in any way. However, there may be a noticeable time difference between the start time and the finish time of those deleted points, as I stopped to take a couple of photos from inside the tunnel, so probably spent a couple of minutes in there. (I haven't checked all the time points).

I've done a quick raw analysis on the data from your GPX file, so adding up the total ascent and total descent relying on the elevation data in the file, and the result are as follows:

So my conclusion from that is that Garmin Basecamp, just like us, is doing something other than relying on the raw GPX data. What is anybody's guess mind you, but probably some sort of smoothing.

And here's yet more proof of that.