Another new release of WayMaps

We have just put online a new release of WayMaps incorporating the usual update from our data sources but also various tweaks, some relating to feedback we got here for the last release. The main changes are:

See here for details, including a rather cool slider to let you view the changes side by side

Definitely liking the contour height labels having been made larger again, and also the use of "S" and "G" for stiles and gates, which makes them much easier to spot than previously!

On a personal note, the changes in respect of parking indicator symbols (for me) could make using the map slightly more difficult, particularly when using A4 sized printed copies of map sections, (which I sometimes use for speedy reference when visiting an unfamiliar area).

At this reduced font size and dark blue colour, they really do seem to almost blend in with the surrounding detail, making them hard to see.
I personally feel that the size, the "bold" font, and certainly the lighter blue colour of the previously used version was more appropriate in the general scheme of things on the maps.

Also, if one is visiting an unfamiliar place by own transport, it is very useful to know exactly where public parking can be had, and so the removal of such indicators where several parking areas are nearby is, in my opinion, a detrimental step for map functionality. - In such places, if you only see one "P" indicator, you would now have no idea that other parking areas are available nearby.

We've been talking about this today. We had a number of issues around the P markers which is why we made changes. This map from before the last release illustrates our issues: 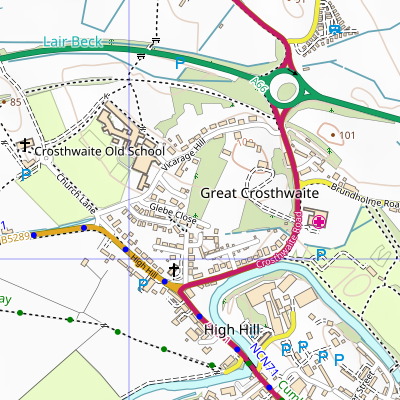 First we were concerned about the "cluster" effect you get where there's lots of small parking areas in one place, as you can see for example bottom right in this image where it ends up writing over other map details to an unnecessary extent. To our mind the priority for a map aimed at walking should be simply to identify an area where there is car parking. When you arrive there you should be able to pick the particular one to want to use simply by looking around. That's why we've stopped two or more P icons appearing very close to each other, instead you get one.

Secondly the P icons did not stand out well against some backgrounds. See the one on the A66 for example or the one south west of High Hill. Beth solved that by adding a "halo" around each one.

However I was a little concerned about the colour and weight we are now using for the P icons as it was darker and I didn't feel it had enough "pop" and your comments confirmed my worries.

So Beth's tweaked both the colour and the weight of the P icons and in the next release they will look like this: 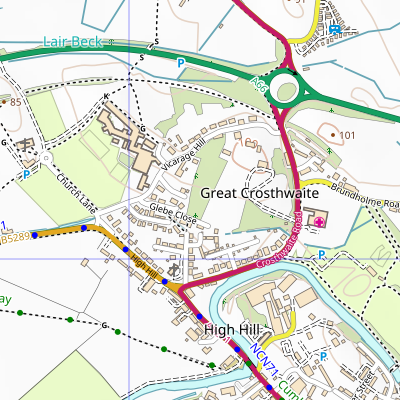 If you compare that to what you're seeing now on WayMaps I think you'll agree that they are will be more visible.

This will be rolled out as part of the next release, so thank you for the feedback.

I agree that the lighter blue colour, and bold font will definitely make the parking indicator more visible than the dark blue version, and I do appreciate that your aim is to make the WayMaps map as good as it can be for its users, and particularly for walkers. - So please don't take this as anything other than me explaining the logic of my thoughts.

By necessity, many walkers will arrive for their chosen walk by car, so it makes sense that a map will mitigate needless driving around, (with its attendant pollution), with clear indication of parking areas. Plus, until you can find somewhere to park up, you can't get on with the good stuff!

For example, on an occasion where the first small car park you arrive at might be full, and you don't know there's another similar car park just around the corner. - You may end up driving around needlessly if you don't happen to turn that particular corner. - Whereas if you had seen another "P" close by on the map, you would know for sure that there was at least one more car park in the vicinity.

As your maps develop with more feature definitions like the new contour colours & letters for gates and stiles how about having 2 pages under the GPS Mapping tab with a key / legend, one each for OS & Waymaps so people don't have to guess or wade through posts or go searching offsite.

Surely the problem of having to many features obscuring others could be solved by putting things on layers that can be switched on & off or act as a zoom & greater detail, so the basic map may have the small P's but upon switching a Parking layer on these would be boosted in size & multiple close by parking would be identified individually. Plus the action of something changing even when small does bring ones attention to it more.

Plus I really like the new tops walked layer.

As your maps develop with more feature definitions like the new contour colours & letters for gates and stiles how about having 2 pages under the GPS Mapping tab with a key / legend, one each for OS & Waymaps so people don't have to guess or wade through posts or go searching offsite.

There is already a "legend" link bottom right which, if you have Ordnance Survey tiles active on zooms 7-9, opens the appropriate legend PDF in another browser tab. Similarly for WayMaps it opens a legend page ... but I'm painfully aware that it need work.

Surely the problem of having to many features obscuring others could be solved by putting things on layers that can be switched on & off or act as a zoom & greater detail, so the basic map may have the small P's but upon switching a Parking layer on these would be boosted in size & multiple close by parking would be identified individually. Plus the action of something changing even when small does bring ones attention to it more.

It's an interesting idea, but for technical reasons I don't think we could do that (certainly not for parking anyway).

Plus I really like the new tops walked layer.

I had looked around the site & searched using a site search for the legend but didn't find it before I commentated & I can see why now, it is rather hidden. Perhaps a quick solution to making it more noticeable would to be to add it to the site index list at the bottom of all the pages and yes the waymaps legend definatly needs more work.

My comment on the parking symbol was just a theoretical solution and thought it my be hard to implement but just threw it out anyway. But MIke's idea of marking close by car parks when you can't see one from the other, could mean visiting all the car parks to check, so one would be bagging car parks instead of Tops

MIke's idea of marking close by car parks when you can't see one from the other, could mean visiting all the car parks to check, so one would be bagging car parks instead of Tops

You might just have started a new outdoor recreational pastime there!!!

More seriously though, I do think that for the most part, OpenStreetMap & WayMaps mapping is generally better than OS mapping when it comes to showing car parking.
For example, the small car park(s) shown on Paul's example image above, (in the High Hill area of Great Crosthwaite), aren't shown at all on either OS 1:50000 scale Landranger series or 1:25000 scale Explorer series maps.

However, I do still think that WayMaps would be even better for the user, if some means of showing the fact could be included when multiple yet visually discrete small car parks are located in a local area. (Although I do take on board Paul's concern regarding clusters of parking indicator symbols covering up relevant mapping detail).

Baring my previous suggestion about having parking on a layer, the only other things I can think of are having a whole new zoom level so everything is more spaced, but Paul has said this before about it in Possible Tweaks to Mapping? , a conversation you Mike started.

It's worth mentioning that zoom 9 on WayMaps is already more zoomed than zoom 9 on Bing (400pixels/km v 360pixels/km) but given that zooms 10 and 11 would add no more information, but would create a big problem for in terms of time taken to create and upload each revision to WayMaps (both of which increase exponentially with zoom level) that's not something we're keen on.

However I note that the Talky Toaster 1:50k look & feel maps (screen shot at bottom) which I also use goes through 30 zoom levels in scale terms but less for data changes, but I don't know if this is facilitated by the dynamic resolution vector graphics rather than the Garmin maps with raster graphics that Martin says he uses.

These maps also have a more info on hover over which could potentially be used to indicate multiple parking places, but what this truly means & which form the WayMaps are or how easy it would be to implement is something for Paul &/or Beth to comment about. 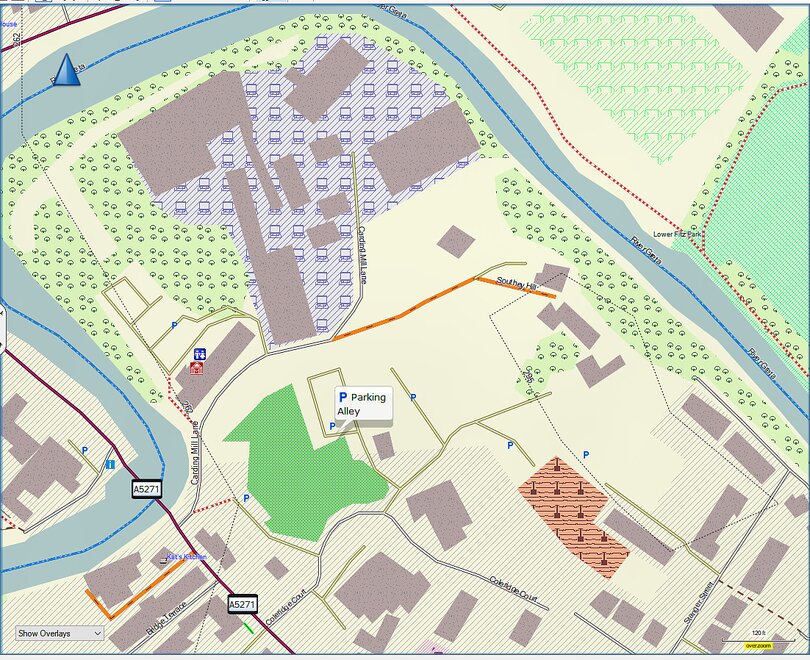