As you'll see from from the release notes popup the next time you go into the mapping application:

When you load a track1 all times are now shown allowed for BST where applicable. Previously times were always shown in GMT.

For supporters only we've also added some extra information. If you're in track mode then the "Walker" information now shows an extra field Speed which shows you the average speed immediately around the point where the walker is currently placed. Here's an example: 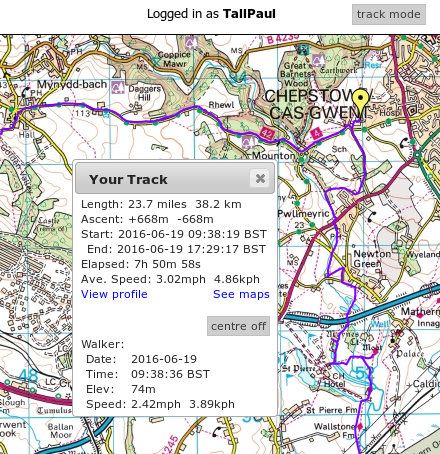 The screen shot above shows a track where our supporter ThinArthur is just starting out on a walk (he gets somewhat quicker once he gets going, as his overall average speed indicates!).

I'd be interested in some feedback on this feature, both on what you think of it and how you find it working for you on your tracks.

And apologies again to supporters that new enhancements have been a bit slow for the last couple of months: we've been moving house and hence business so we've been a bit distracted. But we're into the new house and are slowly getting on top of the unpacking and new house fettling so now things are starting to return to normal with more enhancements to follow.