If you ever use our GPS mapping app on its original site maps.the-hug.net you will have seen that we've been running new software on there for a couple of weeks now. Functionally it looks and feels pretty similar to the old software but it's a complete re-write as it now uses Leaflet rather than OpenLayers as the underlying map tile rendering library and it also uses Ordnance Survey's new OS Maps API to serve the OS tiles rather than OpenSpace and so, currently at least, users have access to 1:25K on that site, which we've never had before.

But all this was just a warm up for the main event, which is to produce a version to run on WalkLakes with extra facilities for logged in users and, especially, for supporters and we've just put the first version online. Please note that this is beta test software and some features don't work yet, so the old software remains in place but you can find the new version at https://www.walklakes.co.uk/maps2

So what's new? Here's some highlights: 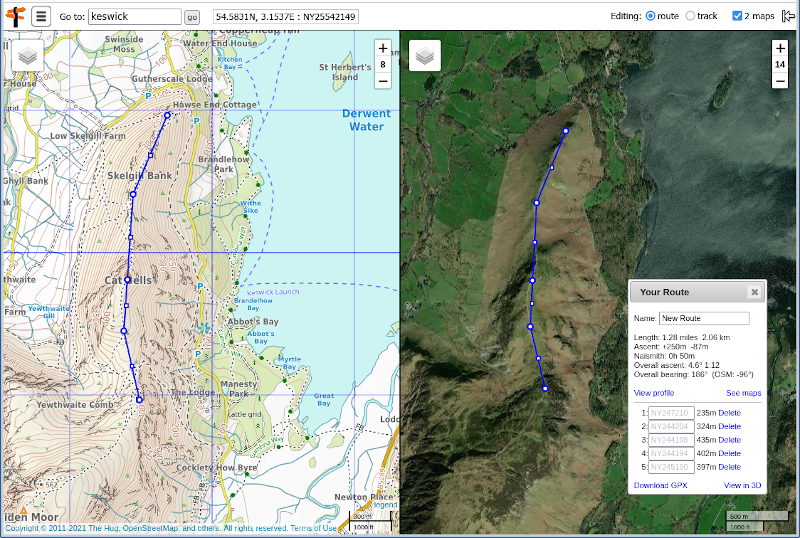 I will be emailing all our supporters about this soon but I thought I'd put this post up now for the keener of you who check the forum.

Please feel free to give the software a go but do bear in mind that this is still in beta so if you do run into any problems can you please let us know? Tell us what you were trying to do and, if relevant, mail us a screen shot.

I should also warn you that the following things are currently missing but we will be putting them in place soon:

Once we've got that all done, and any other missing functionality that I've forgotten to mention, then we're then going to be looking at some new features, in particular the ability to add your own annotations to the map as an extra layer which I know several supporters would like to have.

Finally I should just mention that when you first use this app your settings are copied over from the old app but any changes you make using the new app are not copied back into the old app i.e. each app has its own, separate, settings.

Thanks to the supporters who are reporting issues. I'm resolving them as quickly as I can.

Oh, and view in 3D is now working!