Bowfell via Ore Gap (from Langdale).

A fairly good weather forecast for Sunday saw me making another jaunt to the Lake District, and my favourite area - Great Langdale. My trip this time had the primary intentions of continuing the "break-in" of some recently purchased heavy duty winter boots, and to find and photograph the Packwoman's Grave (see footnote) near Rossett Pike. As it turned out, the day was quite mixed, weather-wise, with lengthy periods of sunshine, and quite dull and overcast skies in equal measure. But light winds, no rain, excellent long distance visibility, and the onset of autumn colours, made for a great day to be out on the fells.

Starting from the NT car park at the Old Dungeon Ghyll Hotel, I walked to the head of Mickleden Valley and then over the footbridge towards Rossett Gill. For the climb of Rossett Gill, I chose to follow the old "direct route", immediately beside the gill and through the ravine. (Since the construction of the pitched path, which contours the ascent over easier gradients away from the ravine, hardly anyone climbs the gill directly, and virtually no trace of the original path can now be found).

A leisurely half-hour detour onto the open fell-side and my search for the Packwoman's grave was fulfilled. After removing some obviously recently placed stones, (I think that such relics of antiquity should be treated with respect and left as near as possible to their original condition. - To me, adding new stones desecrates the site, giving it no more relevance than a cairn!), I took a few photographs and made my way back into the ravine to continue the climb.

Reaching "Rossett Hause" (a name coined by myself for the saddle-like area between Rossett Pike and Hanging Knotts), I stopped for lunch and then continued beyond Angle Tarn to Tongue Head, there leaving the main path, bearing southwards across the boggy plateau and then up to Ore Gap. From there, I headed towards Bowfell, walking and scrambling along the edge of the ridge as much as possible, to make the best of the superb views towards the Langdale Pikes.

Up at Bowfell summit, I was pleased to discover that the sun was in just the right position to highlight the Ordnance Survey bench mark "arrow", chiselled into one of the large summit boulders. I've been here many times, but had never previously seen it showing such pronounced definition. EDIT: Following some email dialogue with Ordnance Survey, there is some uncertainty as to the origins of this bench mark. See: - viewtopic.php?f=18&t=429&start=10#p788

After spending some time taking in Bowfell's glorious summit views, I decided to head back down to Langdale by way of the Great Slab and Climber's Traverse, continuing down The Band to Stool End Farm and the ODG Hotel. - Another great day in the Lakes!

Footnote: - The Packwoman's Grave is another of Lakeland's relatively little known antiquities. Reputedly marking the burial place of an elderly "hawker" who travelled Lakeland's high-fell passes in the late 18th century, peddling her wares. She had apparently died during a winter snowstorm having been unable to find her way off the fells. Whether fact, or merely folklore, there is little in the way of documented evidence to support the story, but a rather poignant (and lengthy!) poem by T H Collinson, MA, tells the tale very well. It can be found here: - http://lakelandhuntingmemories.com/PackwomanNew.html (Edited 24/07/17 to replace the above link. - Previous one was no longer valid). Once again, in view of past vandalism by some visitors to the site, and in line with Wainwright's final comments below, I have amended the GPX track to anonymise its exact location. 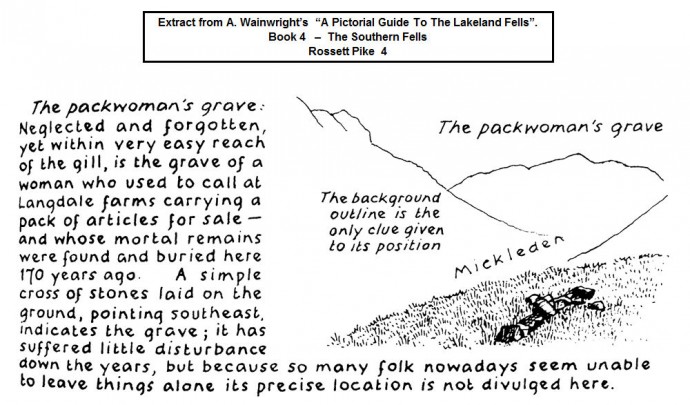 GPX Track of the walk: -

Autumn sunshine and dark skies over the Langdale Pikes: - 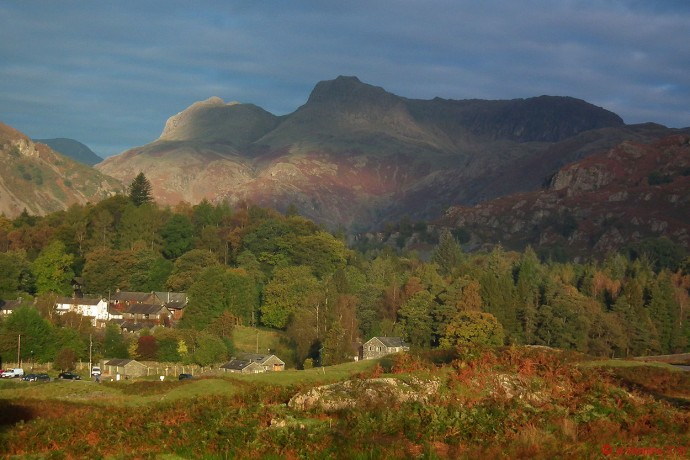 The start of the walk into Mickleden: - 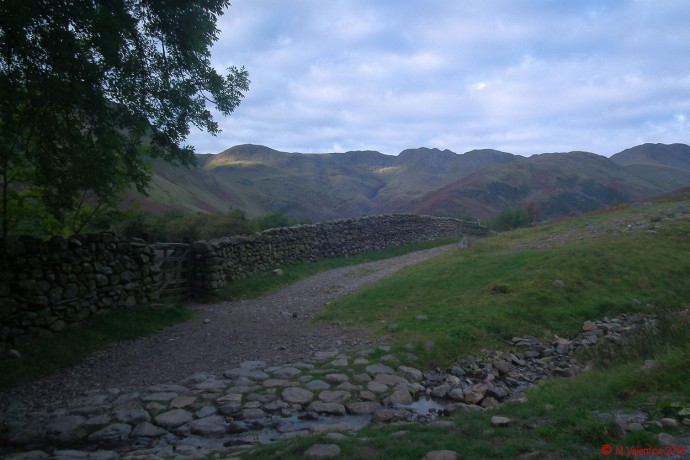 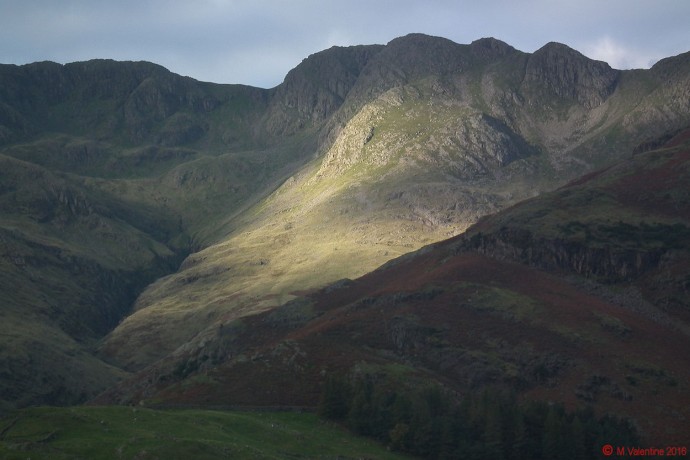 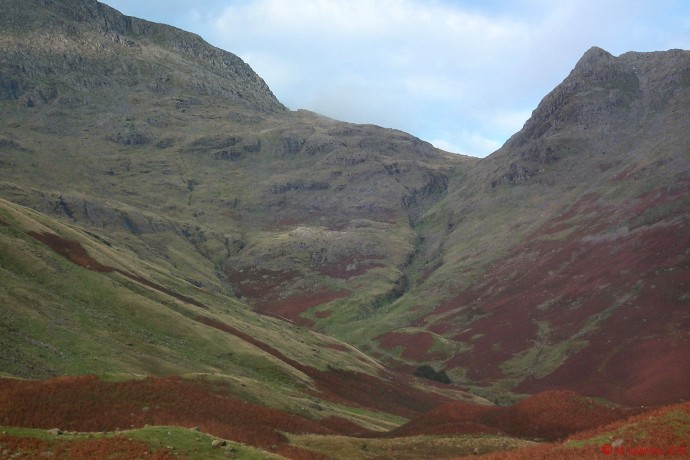 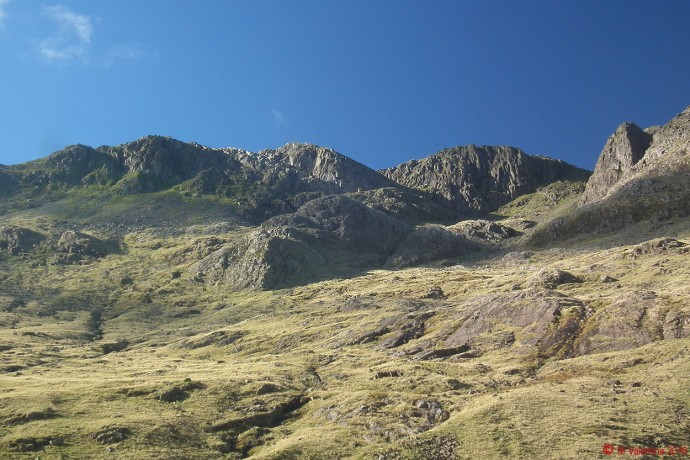 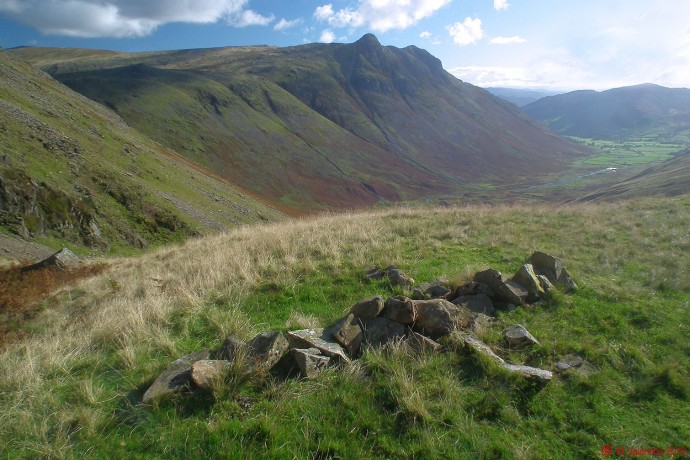 Looking down Rossett Gill ravine, along the length of Mickleden Valley: - 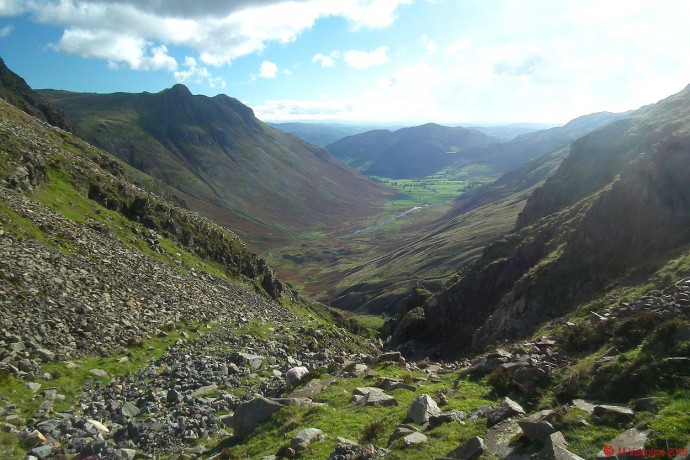 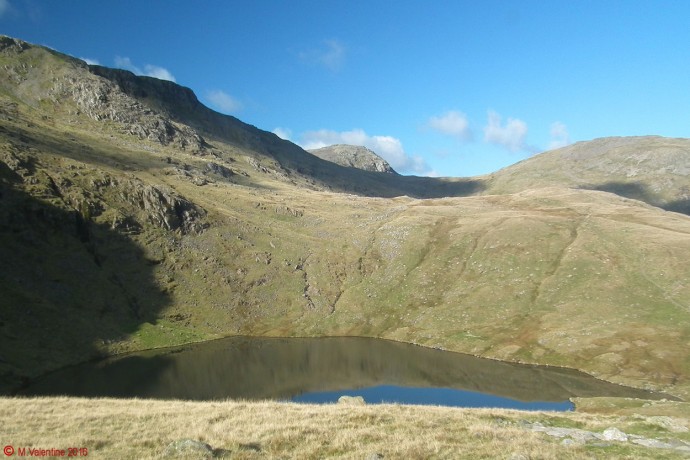 The view across Rossett Pike to Pike of Stickle and the Langdale Pikes, taken from Tongue Head area: - 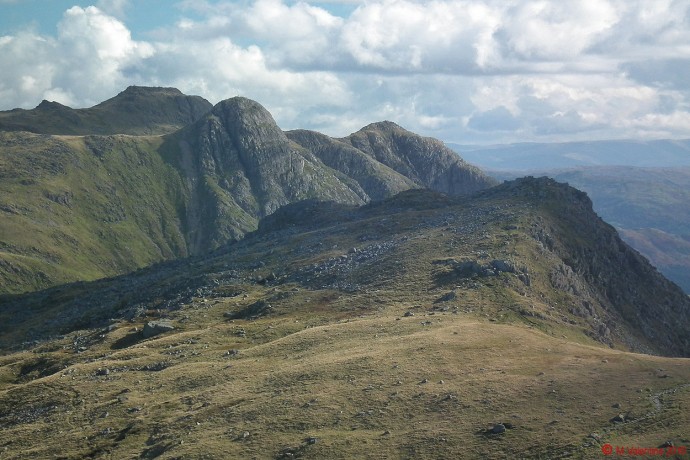 Great Gable and Green Gable, taken on the way up to Ore Gap: - 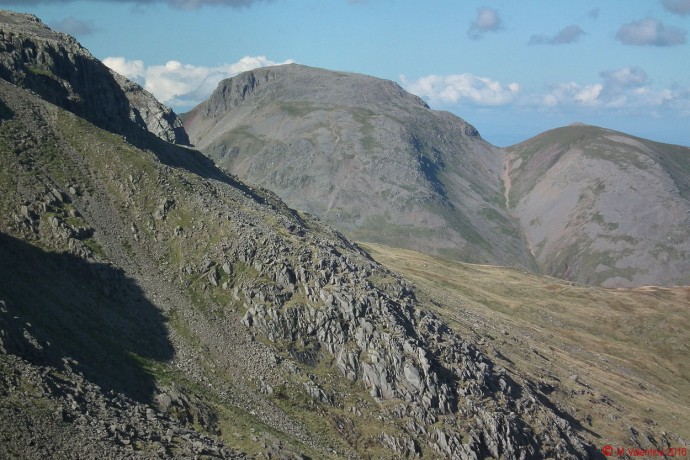 Looking down Langstrath from the track up to Ore Gap: - 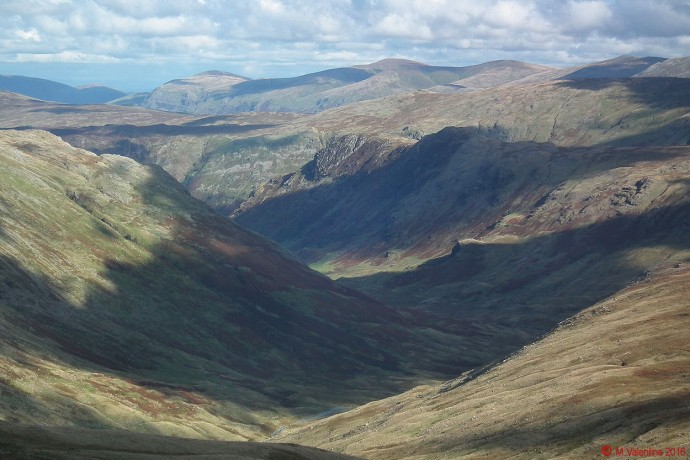 The Scafells from Ore Gap: - 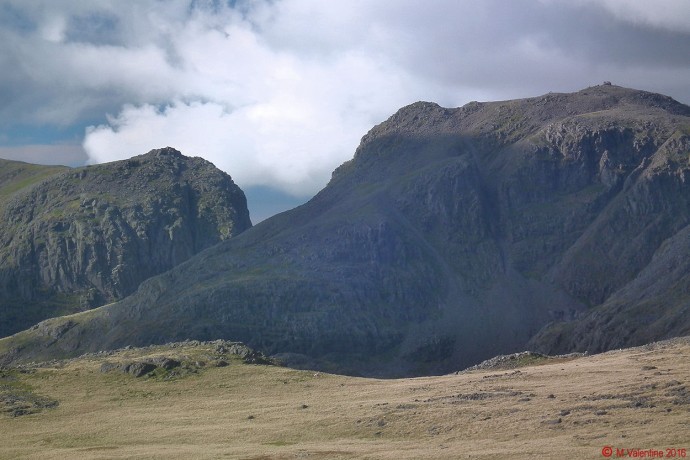 The Langdale Pikes from the ridge to Bowfell. (Taken from somewhere above Cambridge Crag area): - 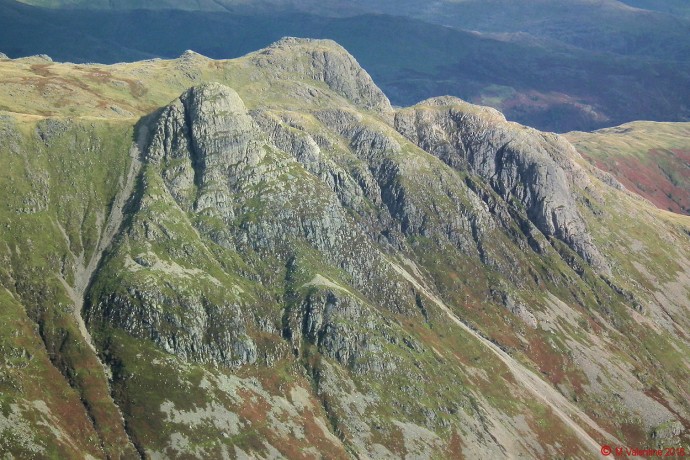 Looking across Langdale from the top of the steep scree slope next to Bowfell Buttress: - 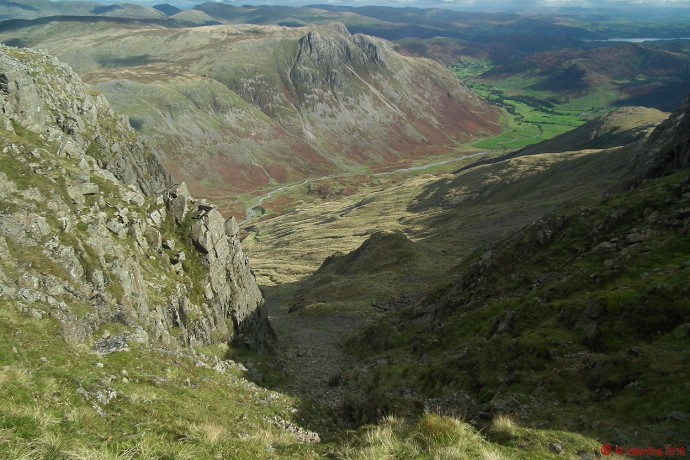 Looking down to the Great Slab & Climber's Traverse: - 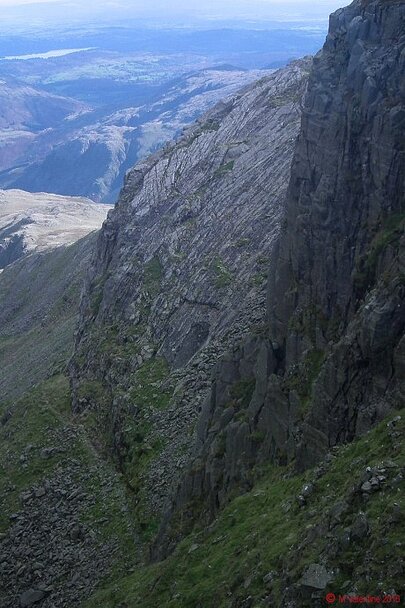 Yours truly at Bowfell summit, with the Scafell's vista behind: - 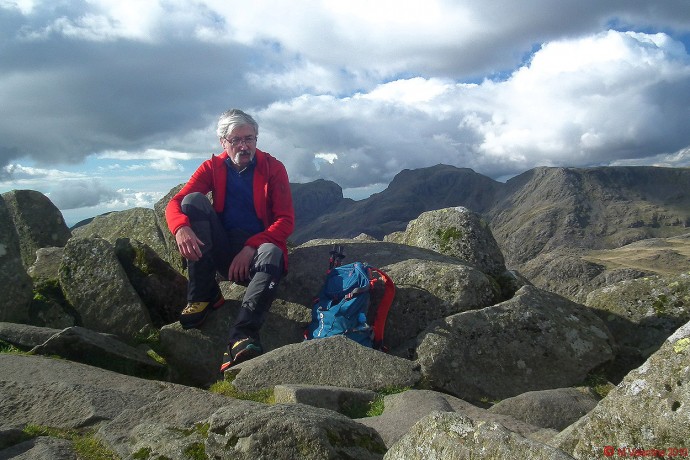 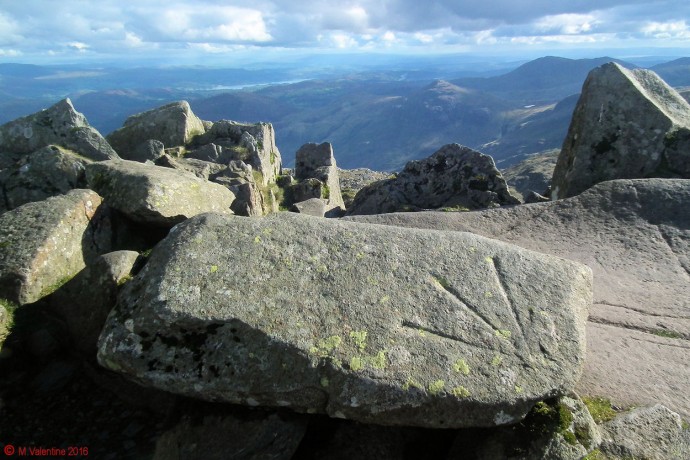 Looking across The Great Slab: - 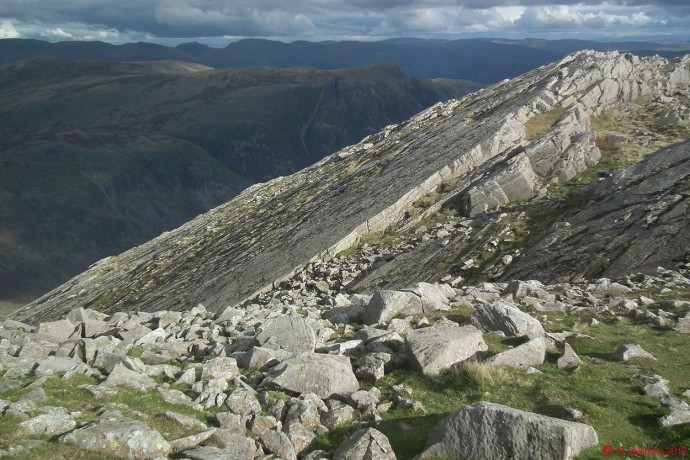 Bowfell Buttress from The Great Slab: - 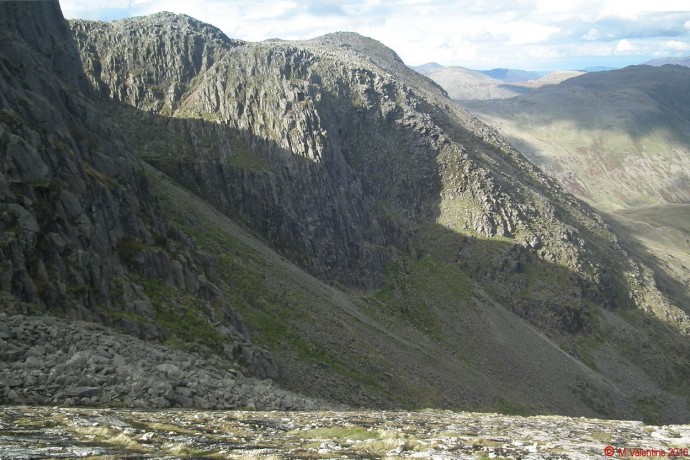 Looking along the Climber's Traverse: - 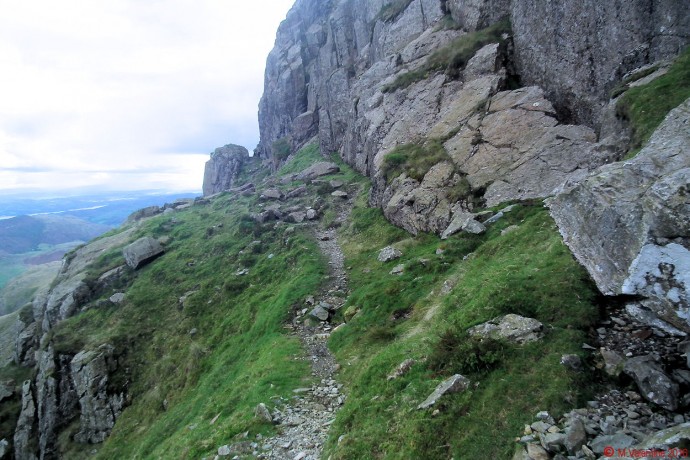 Overcast skies above The Band. - On the way back down to the valley: - 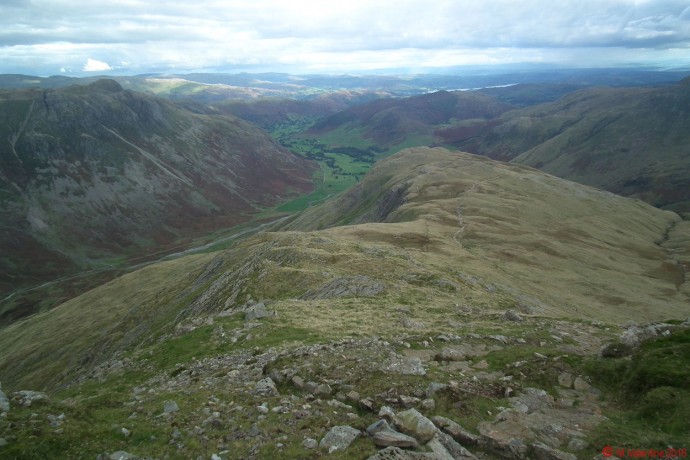 The sun comes out again, on the way down The Band: - 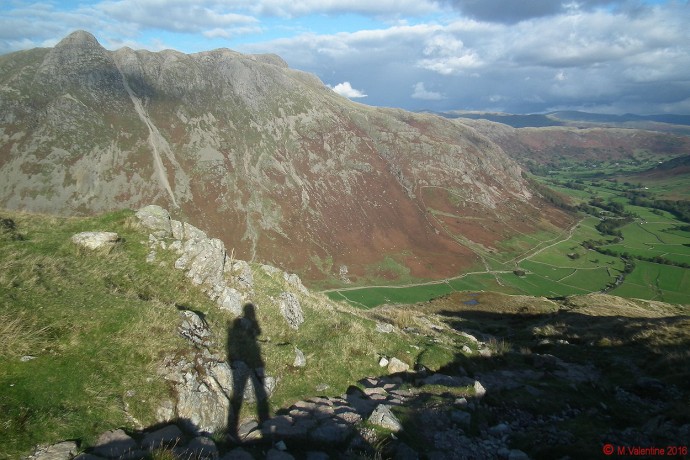 A close-up of Pike of Stickle, taken from The Band: - 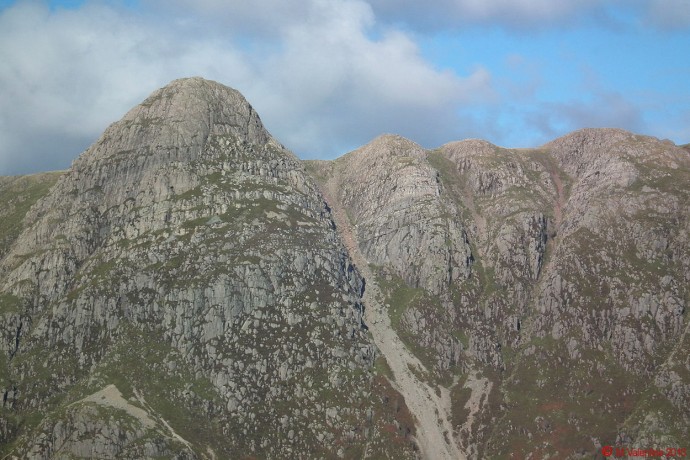