The forum seems to be very quiet at the moment, so I thought I'd add a walk that I did earlier this year.

Starting from the NT car park adjacent to the Old Dungeon Ghyll Hotel, I walked along Mickleden, and then followed the newer (part-pitched) path up Rossett Gill to Angle Tarn, before continuing up Tongue Head, to Esk Hause.

Descending from there I carried on past the impressive north-eastern face of Great End, which was still showing just a few remnants of winter snow high in the gullies. Then, onwards to Sprinkling Tarn, with the descent continuing towards Sty Head, to pick up start of the Corridor Route.

I never cease to be impressed with the views that can be had by taking the Esk Hause - Corridor Route approach, and even though it considerably extends the walk from Langdale to Scafell Pike (both in terms of Mileage and overall ascent), I think it adds immeasurably to the walk as an alternative to what would be the "normal" Esk Hause-Calf Cove-Ill Crag-Broad Crag ascent route.

As ever, up at Scafell Pike, a good number of people were milling around, so I made my way over to the south-west edge of the summit area to have lunch, and take in the spectacular view across Mickledore towards Scafell.

After lunch, I took the short steep descent to Broad Crag col, then up to Broad Crag and Ill Crag, and onwards to Great End, from where I descended to Esk Hause, by way of Calf Cove.

From here, my original intent had been to retrace my walk-in route down Rossett Gill and along Mickleden. However, now being back at Esk Hause, still enjoying the superb sunny weather, with time to spare, and with the legs still feeling good, I decided to carry on over Esk Pike, and then across to Bowfell, before finally descending via The Band and Stool End Farm back to the car. - Another great day in the Lakes!

Early morning sun on the Langdale Pikes. I just can't resist taking a photo of this superb view every time I'm on my way into Great Langdale! Looking across the terminal moraines of Mickleden to Rossett Pike: - 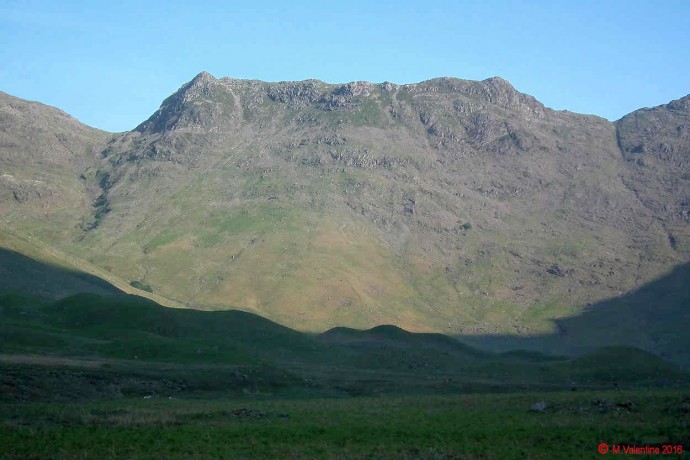 A close up of Bowfell's Great Slab, taken from the plateau at top of Rossett Gill: - 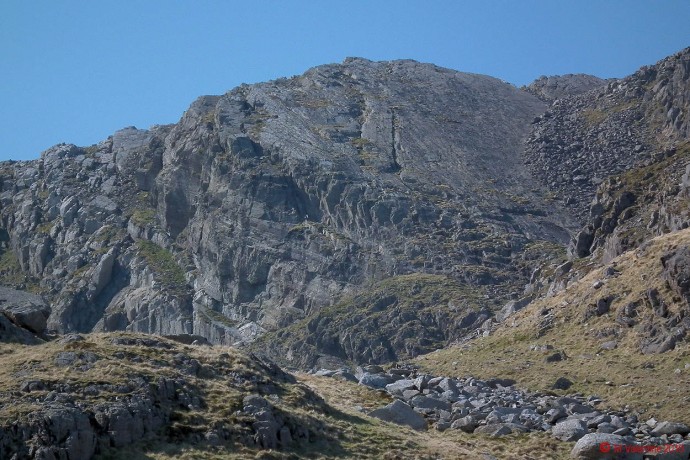 Angle Tarn and the crags of Hanging Knotts: - 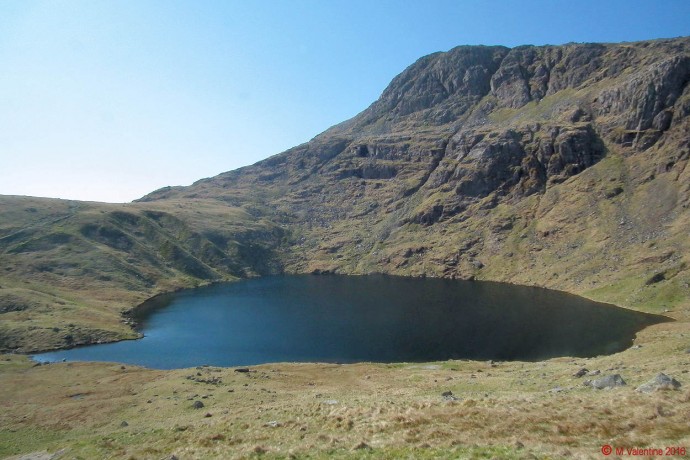 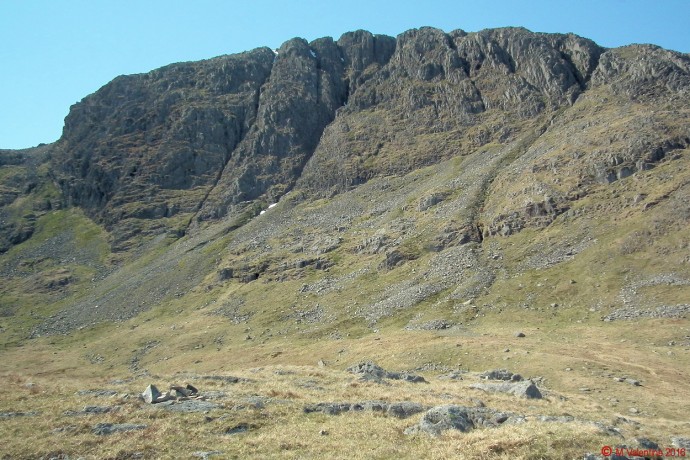 Looking towards Limgmell from the Corridor Route: - The "awkward" step, on the Corridor Route, with Great Gable beyond. Note the way-marker arrows scratched on the rocks to assist walkers who may not be familiar with that part of the route: - 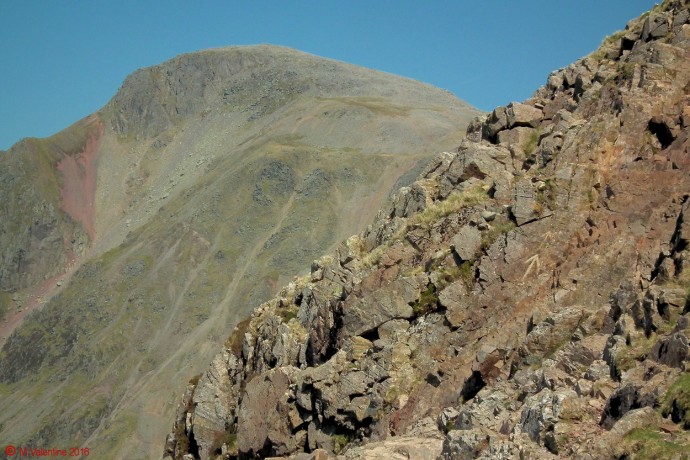 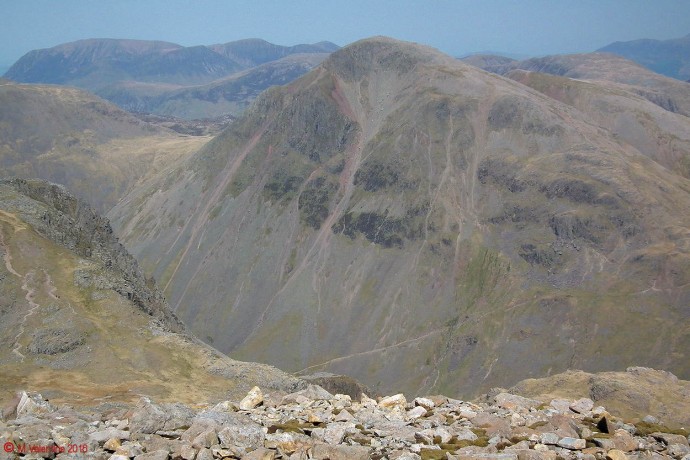 A zoomed-in shot of climbers on Great Gable's Napes Needle. (Taken from same location as the shot above): - 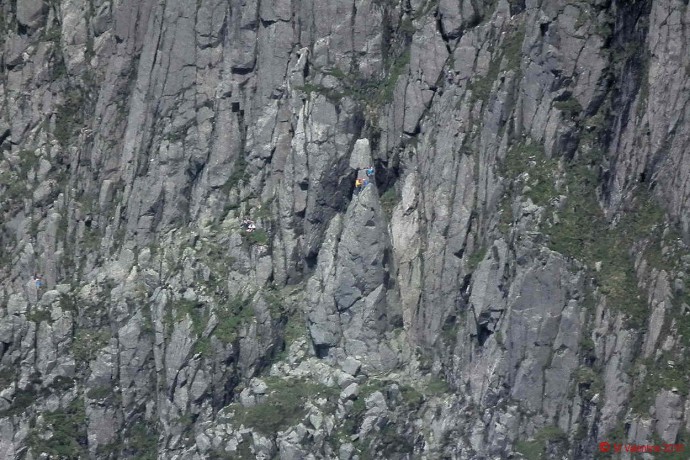 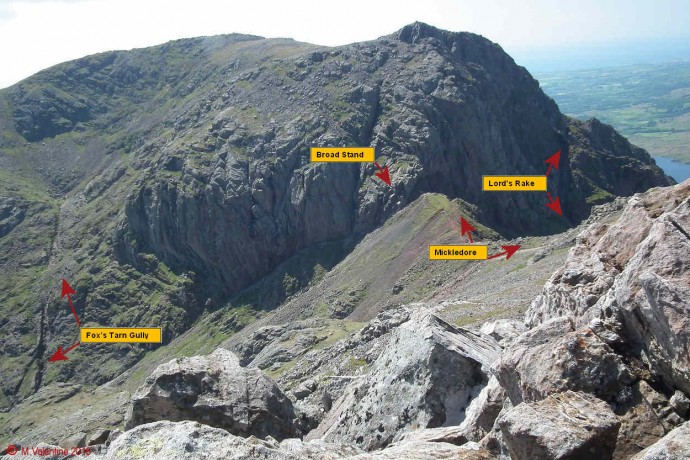 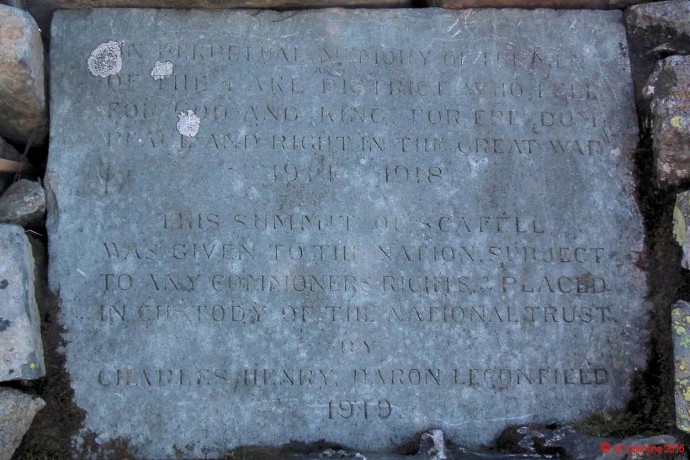 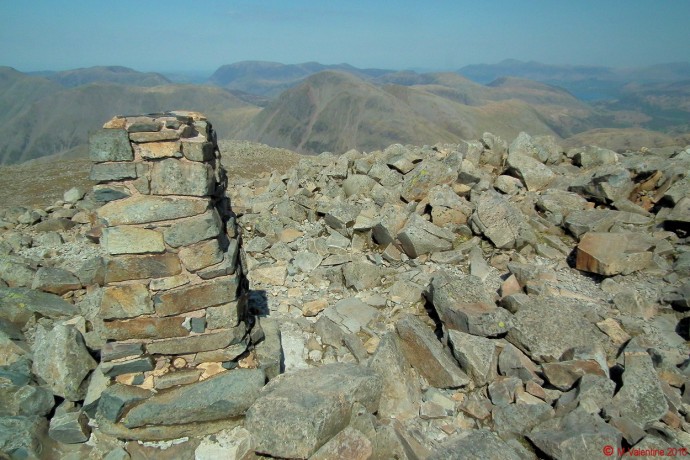 Looking across Little Narrowcove, from the descent slope to Broad Crag col, with Bowfell and Crinkle Crags on the Horizon. 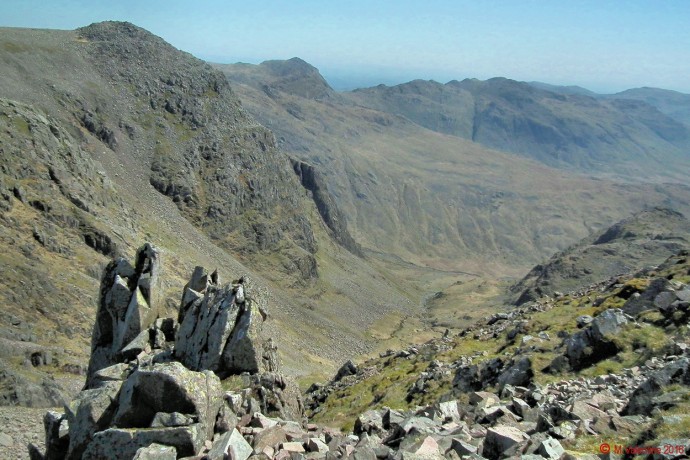 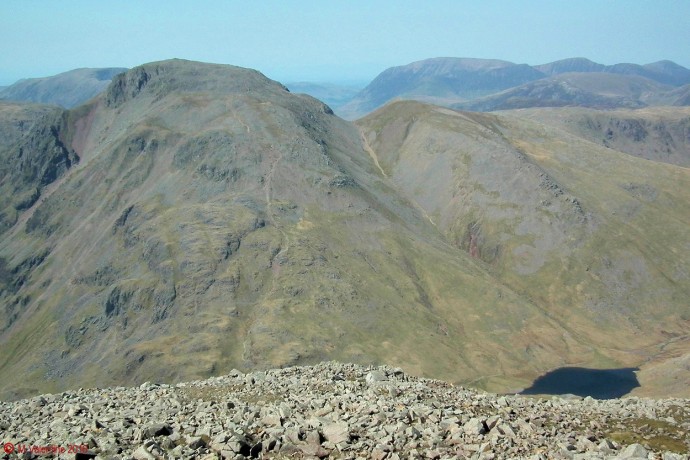 Looking back to Scafell Pike from Great End summit: - 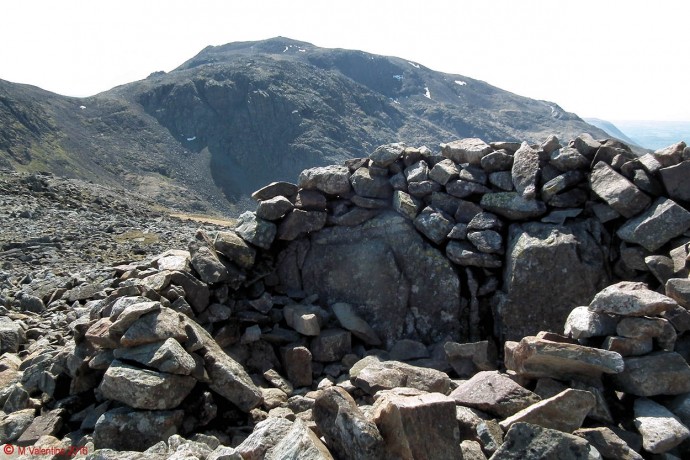 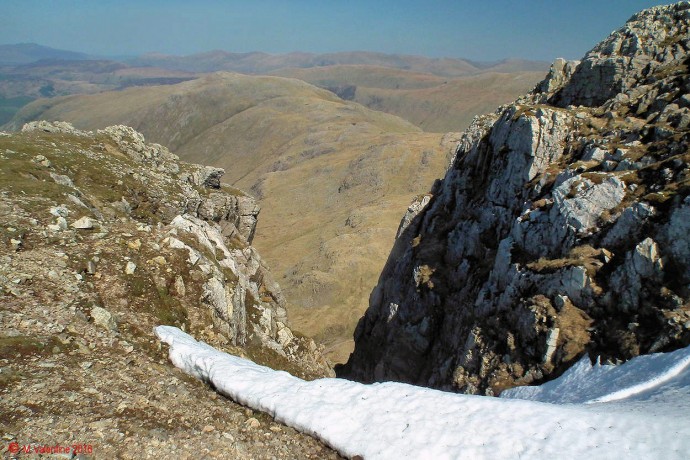 Looking down to Sprinkling Tarn from Great End summit plateau: - 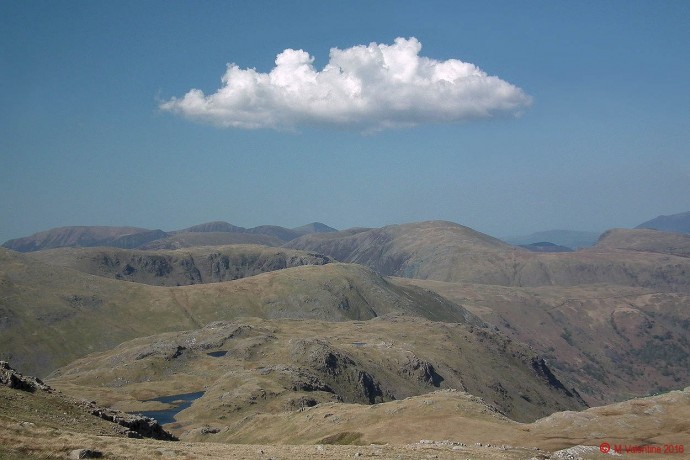 The Three Tarns and Crinkle Crags, from Bowfell summit: - 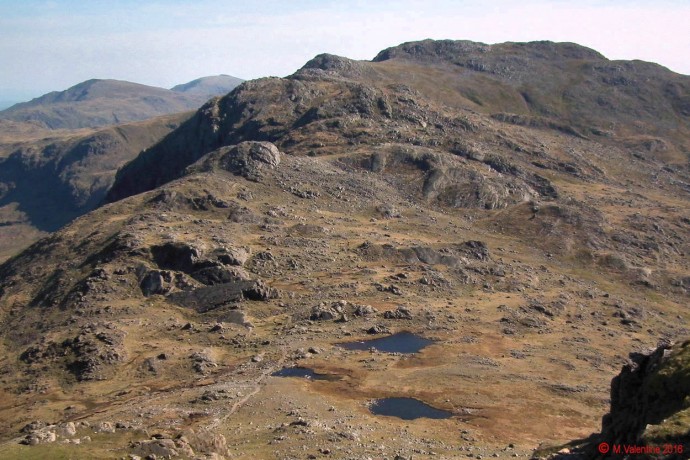 Pike of Blisco, taken on the descent from Bowfell summit to Three Tarns area: - 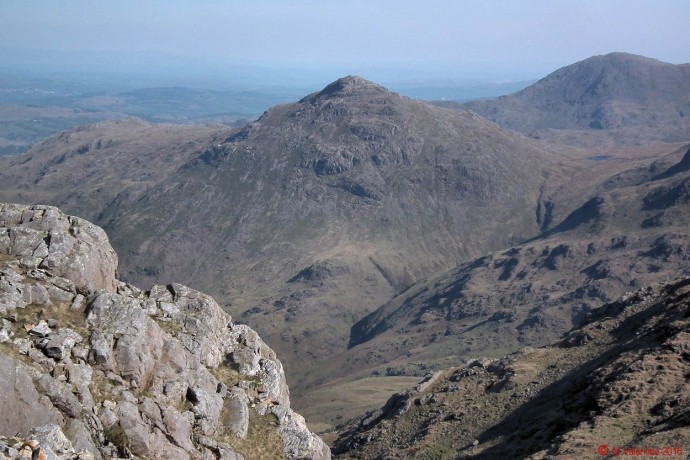 Heading down The Band, back to Langdale. - Tired but happy! Jandy likes this post
permalink
WalkLakes recognises that hill walking, or walking in the mountains, is an activity with a danger of personal injury or death.
Participants in these activities should be aware of and accept these risks and be responsible for their own actions.