Starting from the roadside parking area at Low Tilberthwaite, I took the faint path which follows Blake Rigg Gill,(unnamed on OS maps) behind the cottages, heading steeply upwards, towards Great Intake. Reaching the somewhat boggy plateau between Birk Fell and Great Intake, the spectacular view towards the Langdale Pikes opened up - demanding that photographs be taken!

The walk then continued by descending alongside the dry stone wall to Greenburn Beck, before striking up the Rough Crags - High End - Wet Side Edge ridge towards Little Carrs, Great Carrs, and Swirl How. As height was gradually regained, the views once again became ever more impressive, and by the time Swirl How summit was reached, had revealed various aspects of Crinkle Crags, Bowfell, The Langdale Pikes, the Scafell range, and many more fells in all their glory.

I stopped for a while at Swirl How summit to take in the views whilst having lunch. Although it was a gloriously sunny winter's day, there was a considerable wind on the tops, and wind chill meant that air temperature was well below zero. - So once lunch was out of the way, I made a steep (and slow!) descent over verglas coated rock, down Prison Band to Swirl Hawse, before continuing upwards to Wetherlam summit.

From there, it was a similar type of descent down Wetherlam Edge, to Birk Fell Hawse. At Birk Fell Hawse, the start of the descent path back down to the valley was not very evident amongst the craggy outcrops, but once found, was easily followed. Firstly down into Dry Cove Bottom, and then beside the ravine of Tilberthwaite Gill, before finally skirting the lower flanks of Blake Rigg to Low Tilberthwaite and back to the car. - Another great day in the Lakes!

An early morning view towards the Langdale Pikes. (Taken near the summit of Great Intake): - 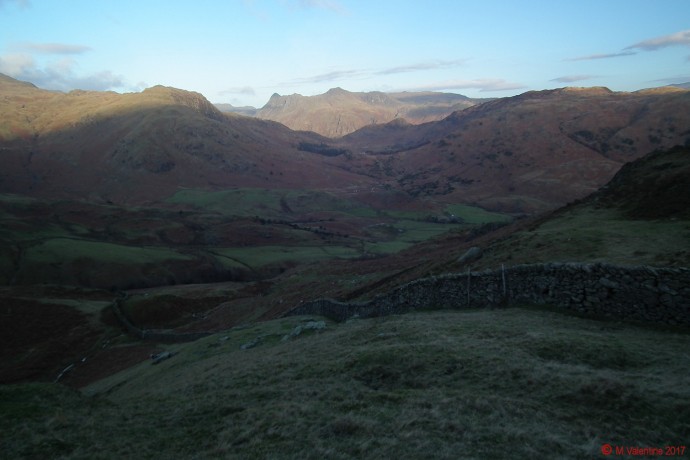 A closer view of the Langdale Pikes. (Taken on the descent to Greenburn Beck): - 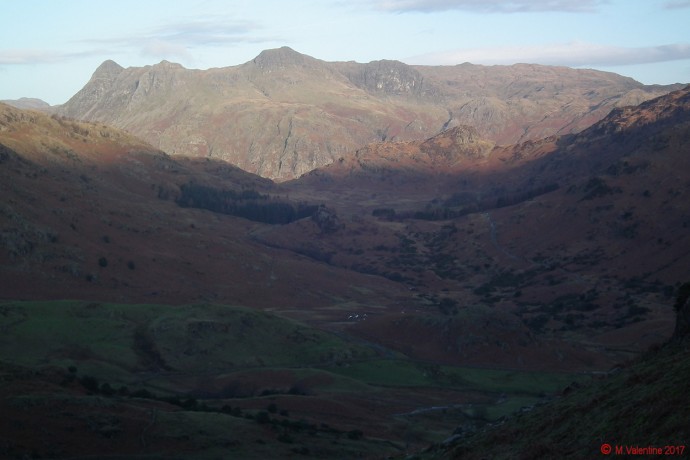 The route ahead - The ascending ridge of Rough Crags, High End, Wet Side Edge, Little Carrs, and Great Carrs: - 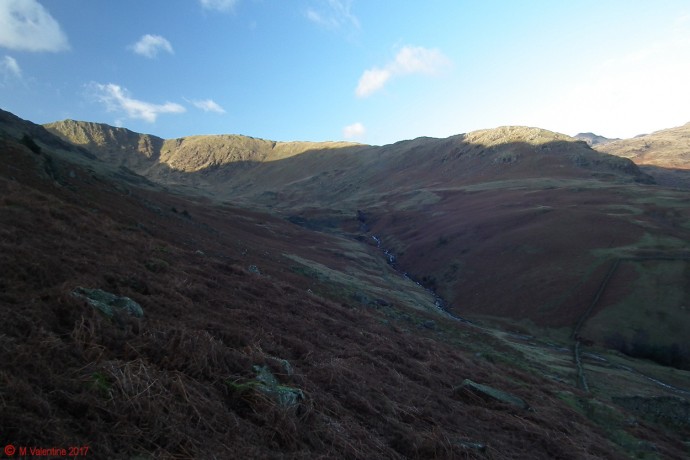 Great Carrs from the lower flanks of Birk Fell: - 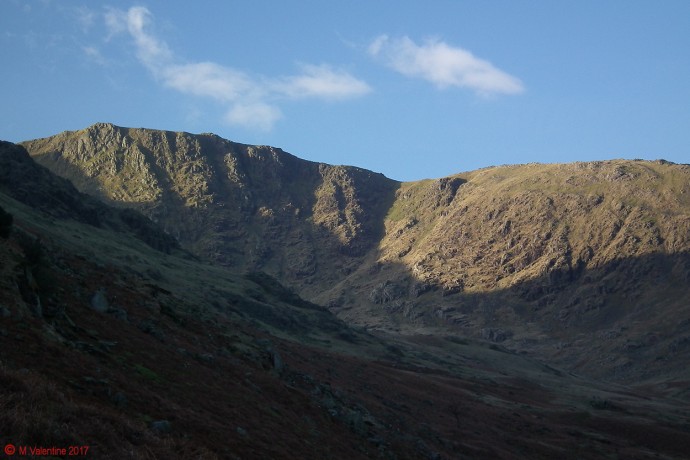 Looking towards Great Carrs from the footbridge across Greenburn Beck: - 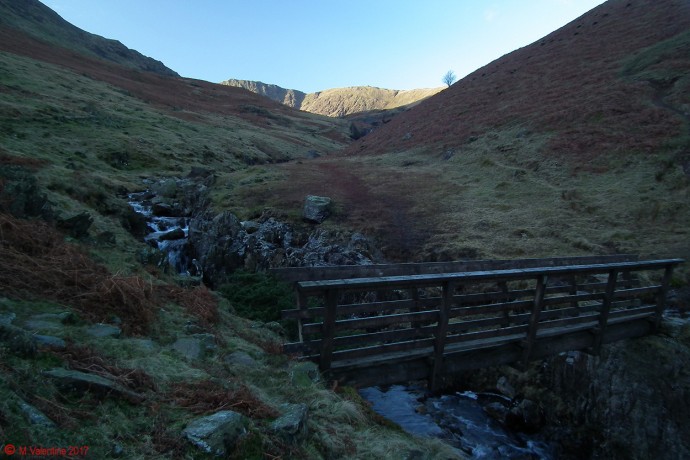 Great Carrs, Little Carrs, and the first glimpse of Swirl How, from Greenburn: - 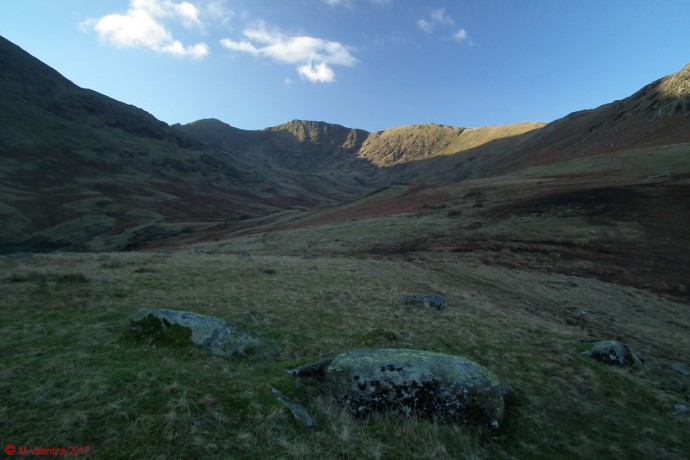 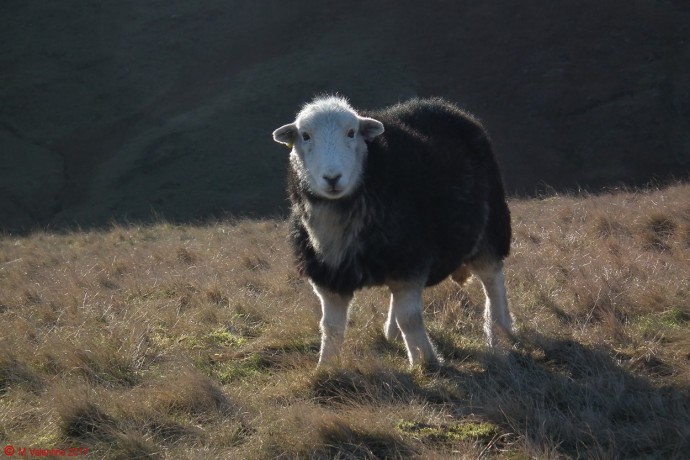 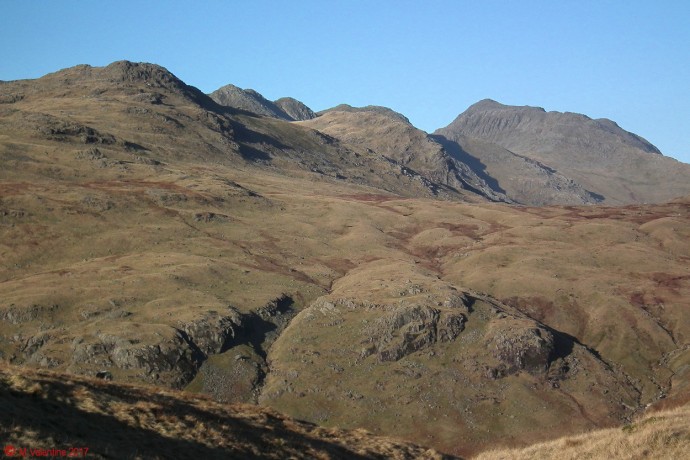 The Scafell range, as viewed from the ascent to Great Carrs: - 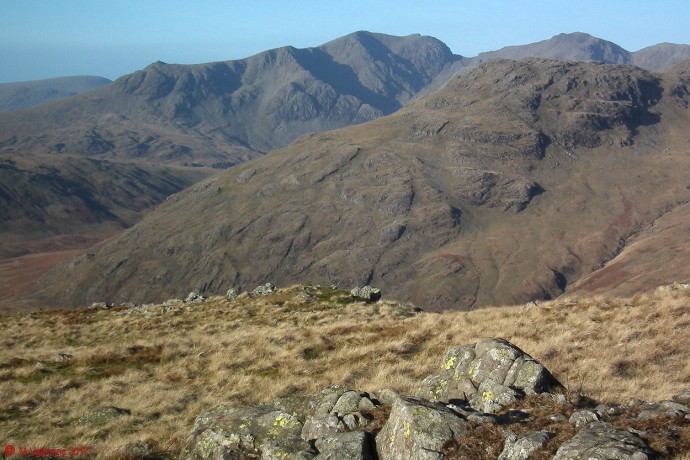 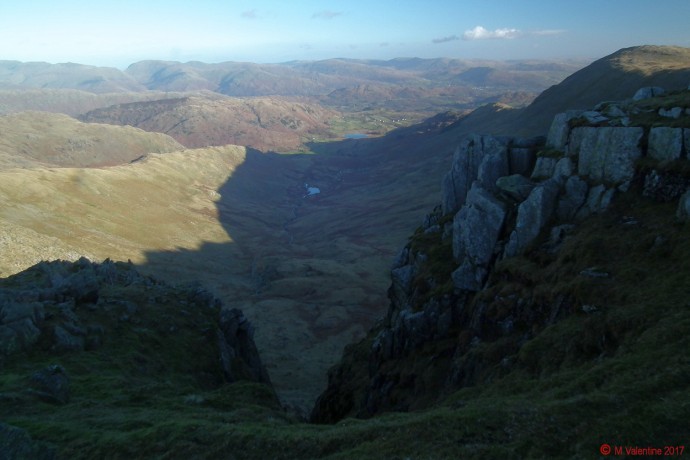 The Scafells, with Crinkle Crags and Bowfell to the right. (Taken from Swirl How): - 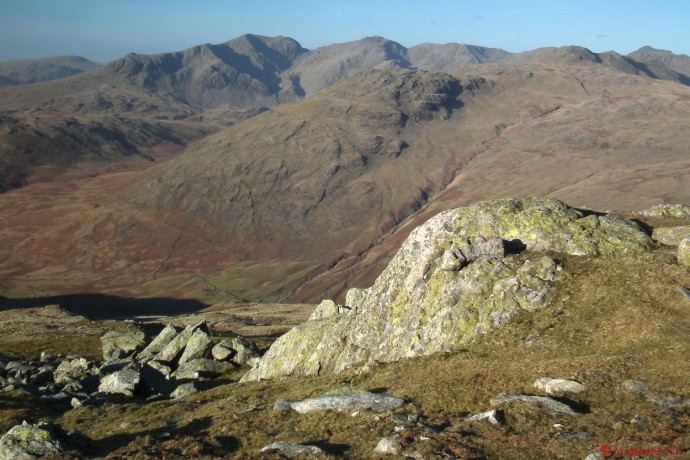 A close-up of the Scafells, from Swirl How: - 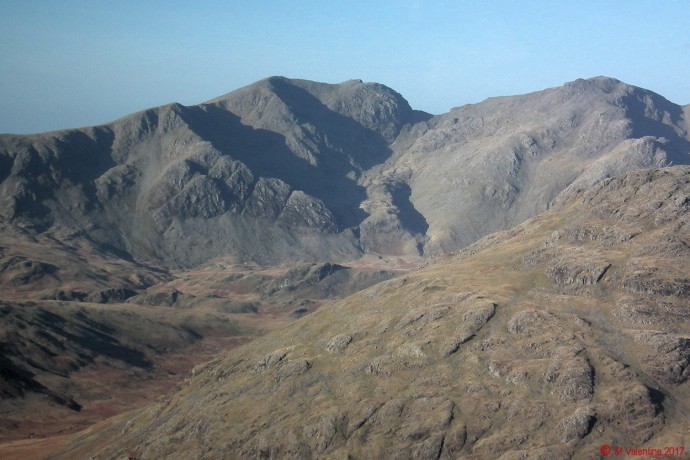 A panorama from the Scafells to Bowfell from Swirl How summit cairn: -

Looking across Great Carrs to the Scafells, Bowfell, etc. (From Swirl How summit): - 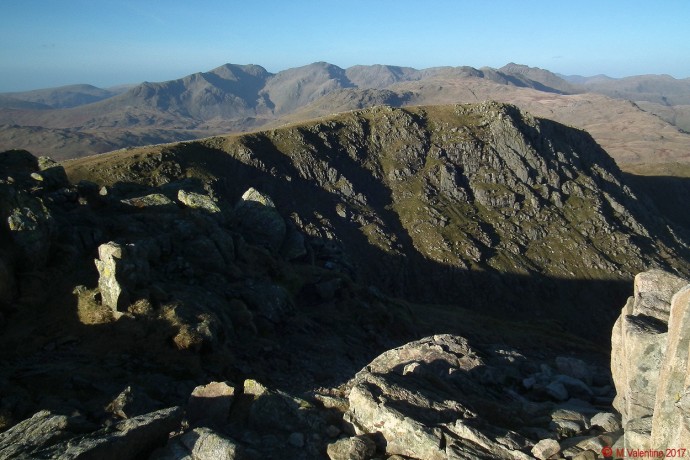 Looking down the Prison Band, and across to Wetherlam, from Swirl How: - 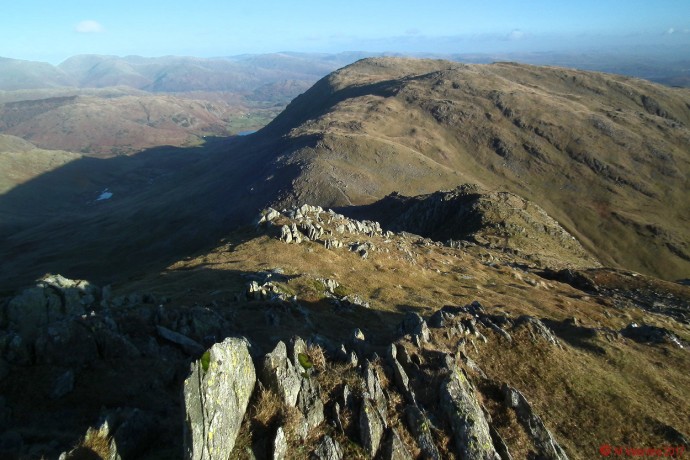 Coniston Water and Levers Water, from Swirl How: - 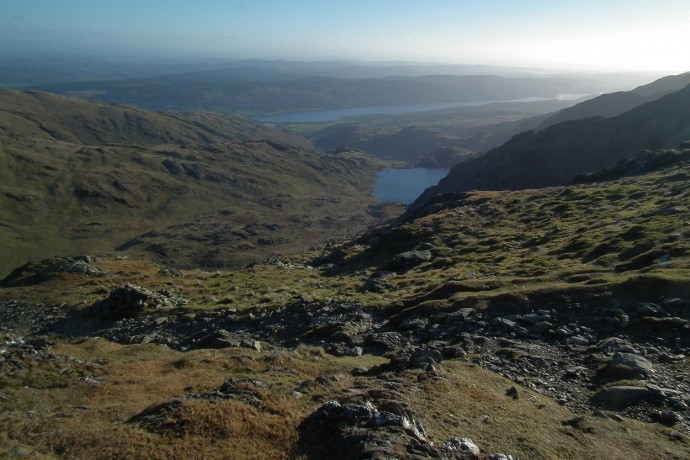 Looking towards the Langdale Pikes and Blea Tarn from Wetherlam: - 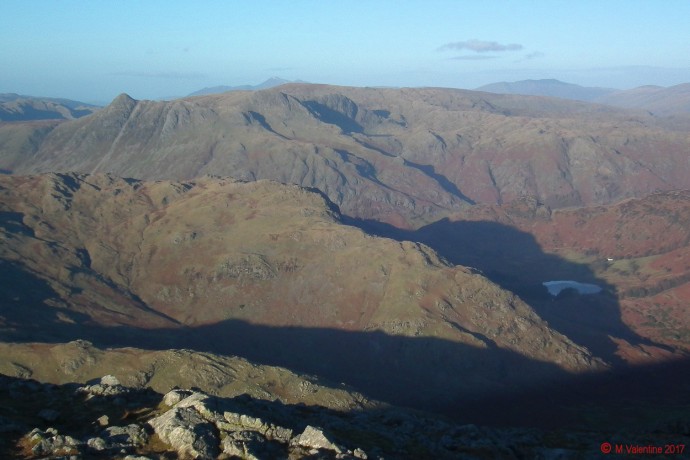 Crinkle Crags and Bowfell, with Red Tarn to lower right. From Wetherlam: - 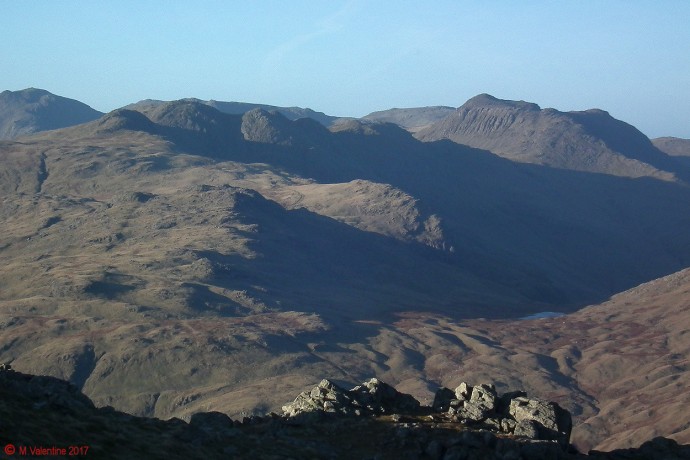 Late afternoon sun on the Langdale Pikes. (Taken on the descent of Wetherlam Edge): - 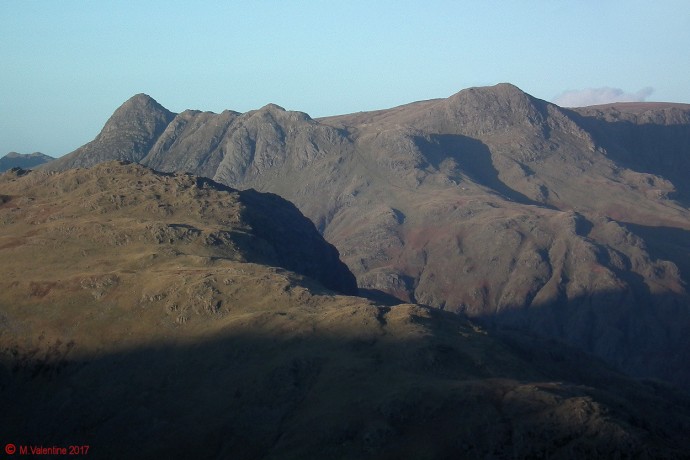 One of four slate artworks to be found in the "Sheepfold" directly opposite to the parking area at Low Tilberthwaite: - 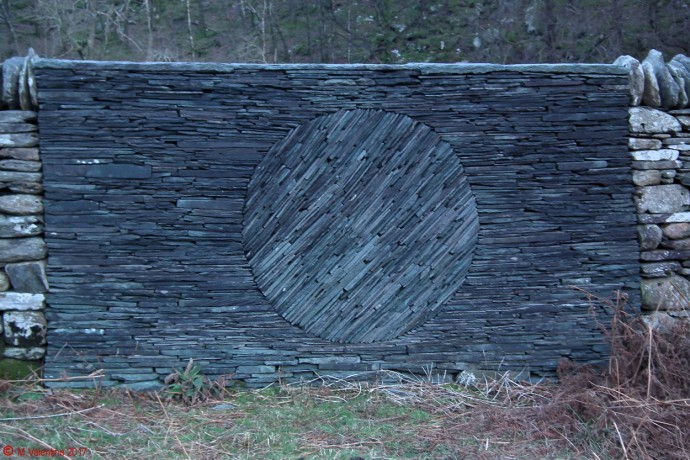