This walk was my 2016 holiday and was the 1st day of 4, it started & ended at Chapel House Farm Campsite where I was staying. In simple terms it was up Thornythwaite Fell, on up to Glaramara, along the ridge to Esk Hause, topping out on Scafell Pike, down the corridor route to Seathwaite & back along the road.

The full gps route below

I started off about 8.30am in weather warm enough to be in shorts & t shirt, it was about 1/2mile on tarmac before one started up Thornythwaite fell first steadily but then increasingly steep on a grass & lightly boulder slope with Combe Gill to ones left (pic 1) and a view of Coombe Door in the distance (pic 2) & into & over Borrowdale as one got higher. (pic 3) 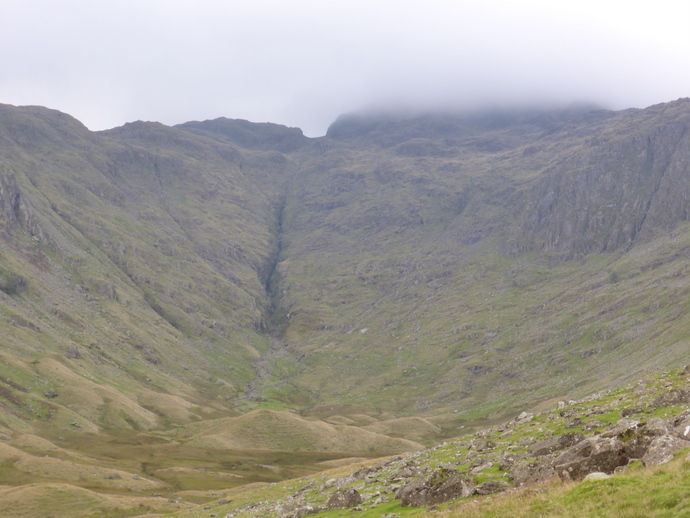 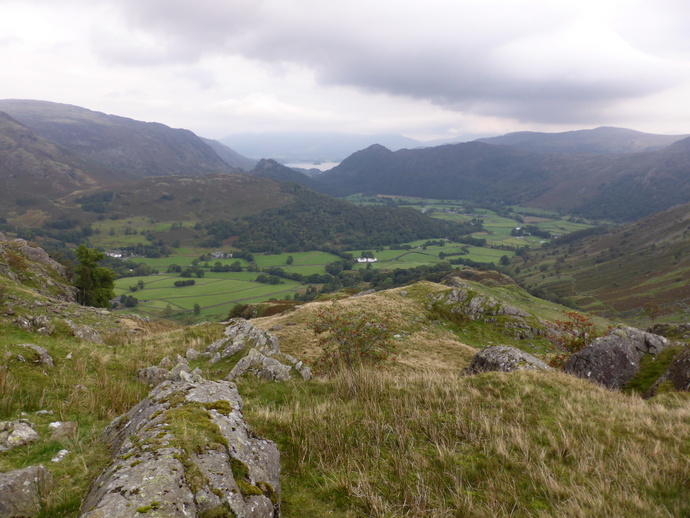 Continuing on up towards Glaramara's top I entered mist/cloud that was quite thick such that at the rock scramble onto the top I it was hard to discern (pic 4) & with the wet rock decided to back off and swing round and up on its right thro' a boulder field. 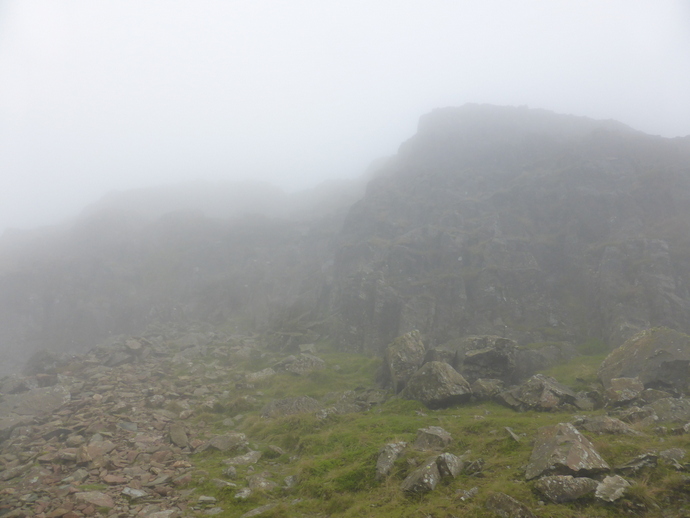 The route on from there was along the ridge, passing by Lincombe & High House tarns (pic 5) and although it's supposed to be a distinct path that does depend a bit on the weather as shown by the conditions. 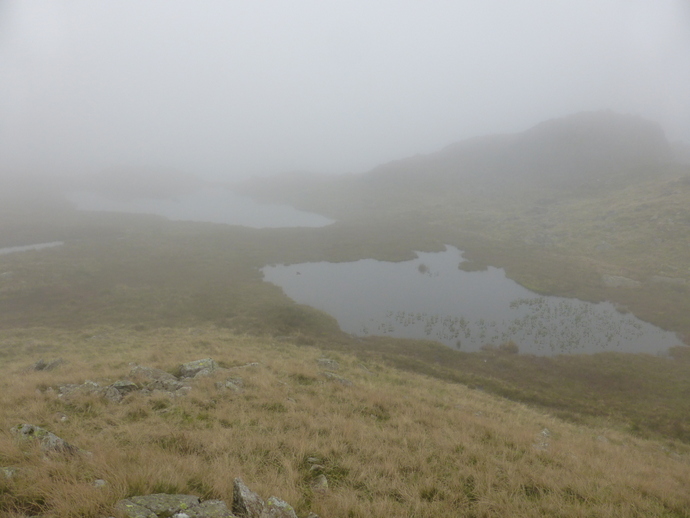 From there it was on over the Allen Crags to Esk Hause (pic 6) where the cloud broke open more. 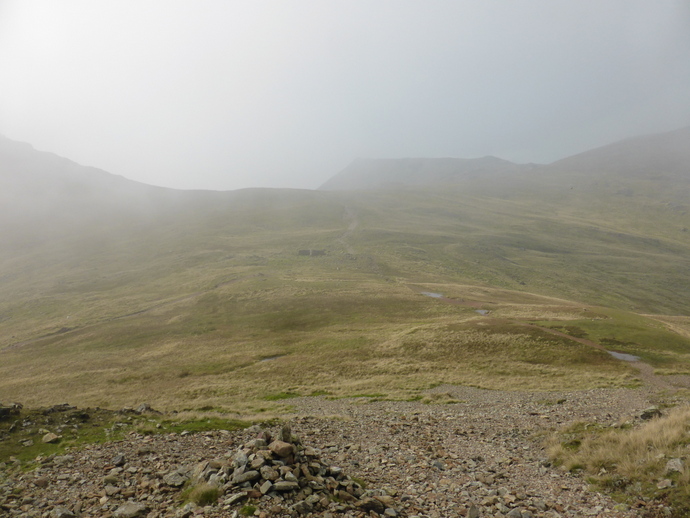 As I was going to Great End I cut the corner as other people have, although it's shorter it's a rougher way, but with the cloud the view was a bit limited (pic 7) 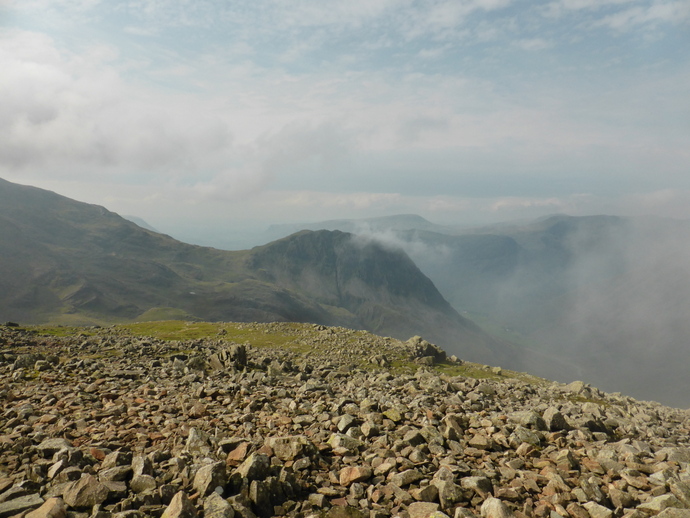 From there depending on how things were going I did have in mind doing Ill Crag & Broad Crag, but being unfamiliar with the territory and knowing I was only half way round, I skipped summiting them and just passed by there rockiness on the main path. Before reaching the high point of the walk, there was the haul up (pic 8) and then the rough path (pic 9) to Scafell Pike's summit itself (pic 10), with the cloud the views were lacking. 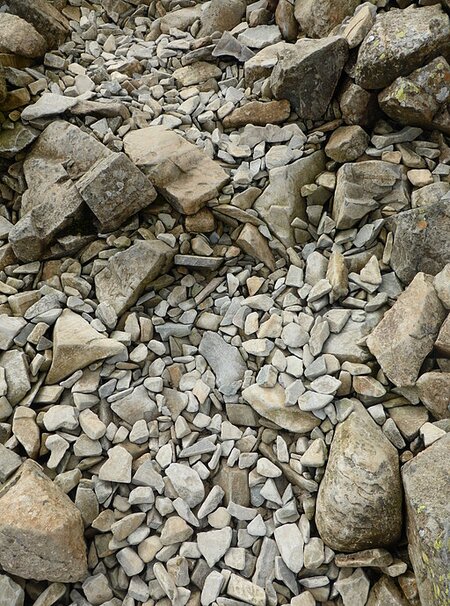 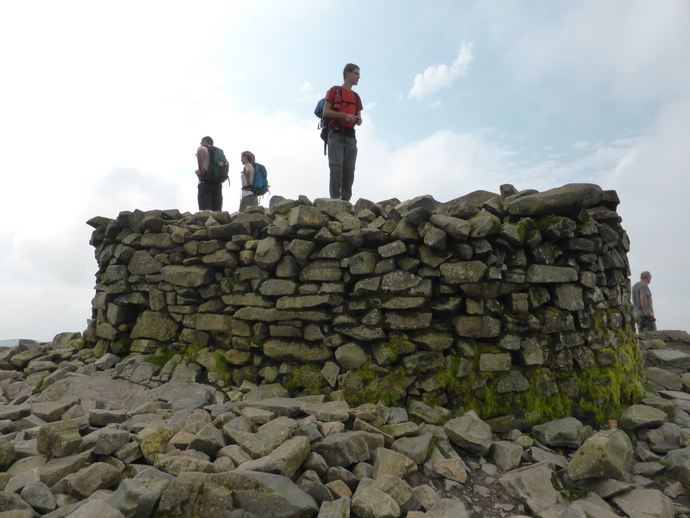 Having stood on the summit cairn and asked a favour of a stranger to take my photo, I'm the one behind the camera in all pics, following AW's advice I went over to the south peak to the views over Esk dale (pic 11) & the main summit (pic 12) 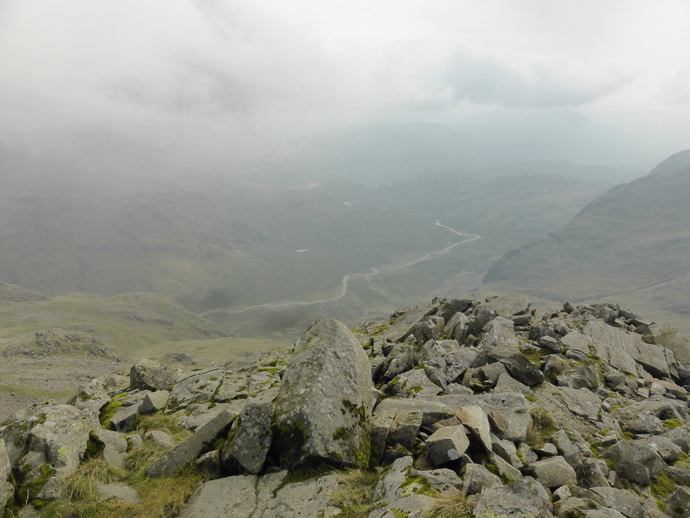 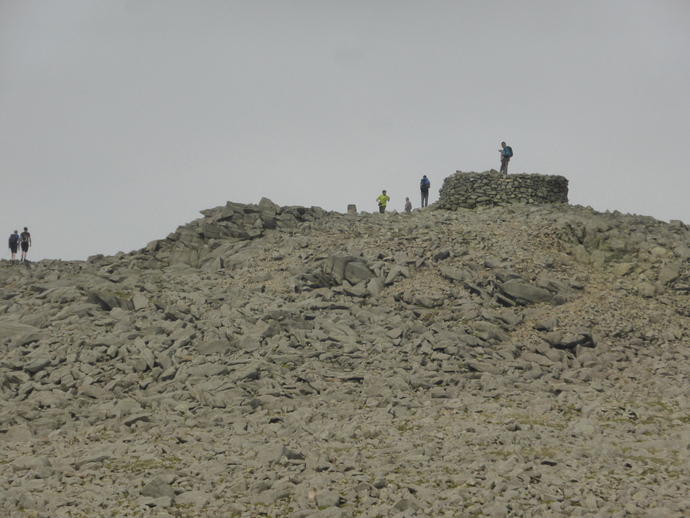 With a planned descent down the corridor route I cut back across the shoulder of the summit, although as there was no path it was a case of picking a way on top of the stones & boulders, getting onto the actual path, the first stage of descent was just smaller stuff and still hard going. 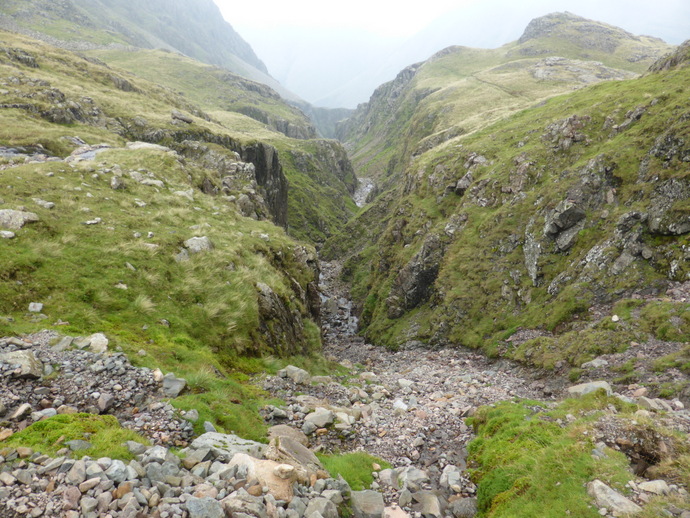 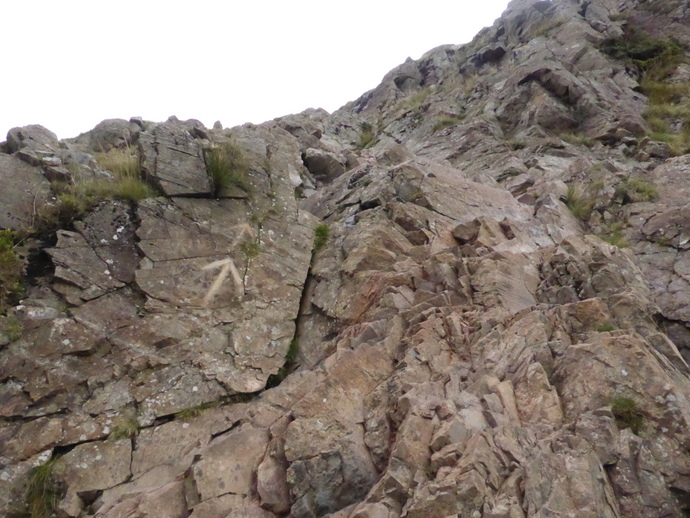 As it started to rain as I approached Sty head I cut across on the minor path above the tarn, this path has a stream jump as well as boggy ground. From here on it was pretty straight going on down, although I was still passing people going the other way and I'd have thought it was a bit late on if they were hoping to get to the top. The steps by the bit of forestry just above Stockley Bridge get to you a bit on tired legs as did the tarmac road from Seathwaite back to the campsite. But despite the light rain coming I was going in for evaporation due to the warmness. Then in an almost ironic thing having walked so far & high on rough & wet ground without even a single blister, what was the worst thing to do, but open up the boot of my car to dump pole & rucksack in and bash my head into the tailgate and bleed down my face. It was then a wash and brush up before a short walk to the pub for a meal and a pint.

Jandy likes this post
permalink
WalkLakes recognises that hill walking, or walking in the mountains, is an activity with a danger of personal injury or death.
Participants in these activities should be aware of and accept these risks and be responsible for their own actions.