This was the 4th and final full day of my holiday and was one of the variations of the Newlands round that are out there. Planning the walk at home I'd thought that maybe I'd walk up from the campsite through the Rigghead Quarries to Dalehead tarn, but after doing 36 odd miles over the previous 3 days and finding I was going slower than my peak district walking, I picked my other slightly shorter option of driving to the end of Catbells and then walking the round.

From the campsite it was just on a 15min drive to the N end of Catbells, where there is parking for about a dozen cars & then I was off walking around 8.40am. After rain overnight it was cooler than the previous days, so I thought I may get on quicker but because it had cleared things up in terms of views I spent longer deviating off the path odd times for the view and stopping more often to take lots of pics.

The path up Cat Bells is probably one of the most trodden and has therefore been improved and was still being worked upon by evidence of the black bags of stone. But there are still parts which are a bit of a scramble up rock, although I believe there are paths round. Having reached the top of Cat Bells I had been hoping that the cloud covering the tops of the higher peaks would have gone but Skiddaw (pic 1) was still decapitated, but the whole of Derwent water was visible, the views you get from this point are 360 deg round. I was also getting a good view of Hindscarth (pic 2) the middle of the 3 ridge ends, where I was coming down later on & Maiden Moor (pic 3) the next high point. 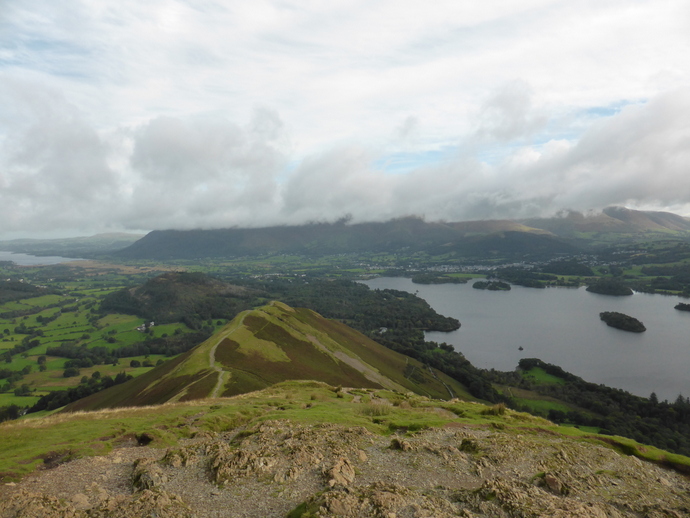 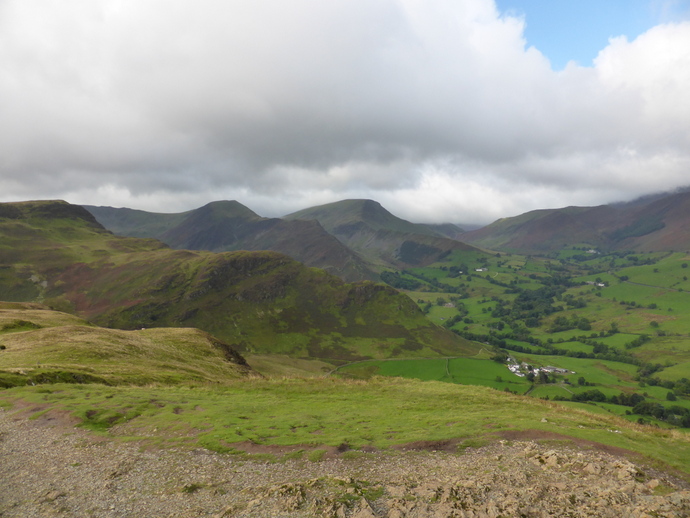 Having moved on to the top of Maiden Moor two more of my objectives were showing themselves High Spy & Dale Head (pic 4) with the cloud just falling over its edge. It was also somewhere around this stage that I found it a bit cool on the easier going terrain and added a fleece on top of the shorts & tee shirt I'd started in and that stayed on for the rest of the day. 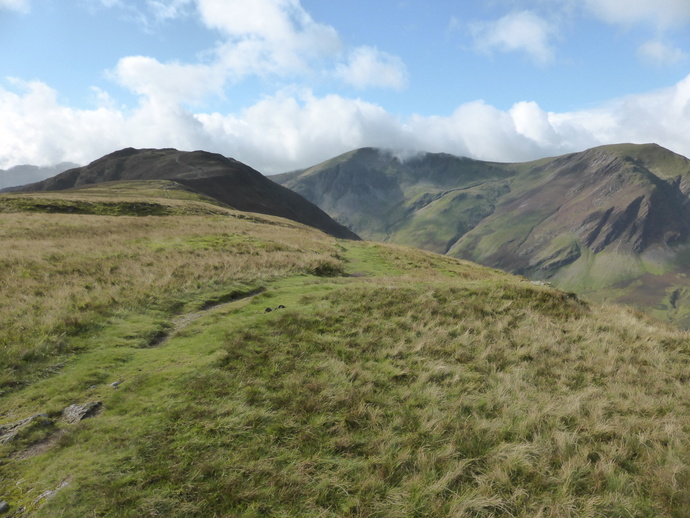 Upon getting to where High Spy levels out towards its summit there was a view down Greenup Sikes to the upper end of Derwent water (pic 5) with the hamlet of Grange sitting at the foot of Grange Crags which seemed to be more separated from the feels behind than first look at map suggests. 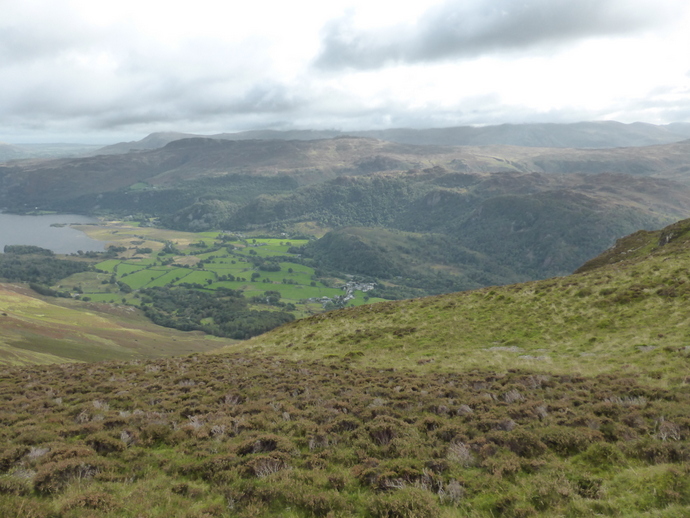 At the summit to High Spy (pic 6) you get one of the more attractive cairns and in this case looking NW you get a sliver of Bassenthwaite among the fells. With the attractive views I spent longer than normal over lunch part 1 here. 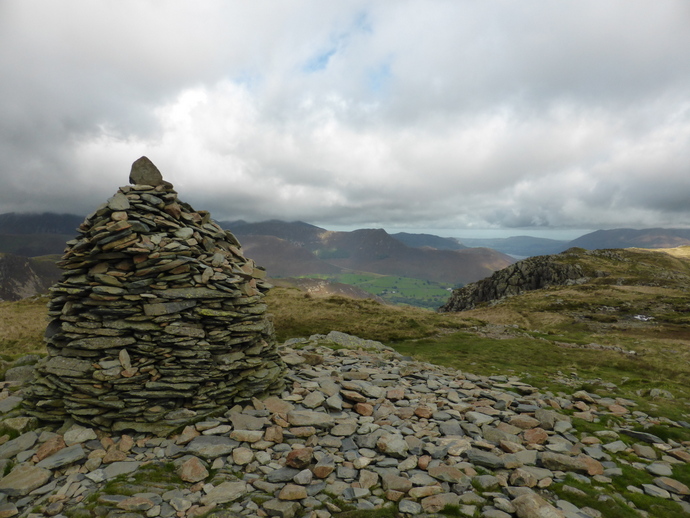 From here one was dropping down sharpish to cross Newlands beck before reaching Dalehead Tarn (pic 7) where I had lunch part 2, some yards N on a rock outcrop to give better views, including my first glimpse along Newlands (pic 8) and looking back up one sees where you've come down from High Spy (pic 9). 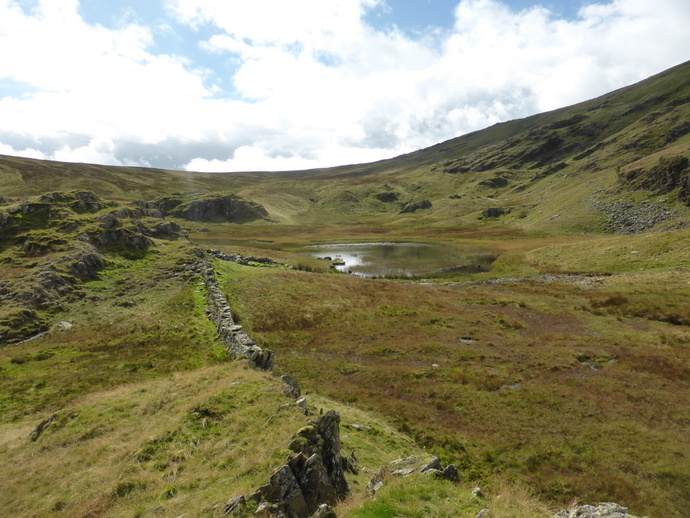 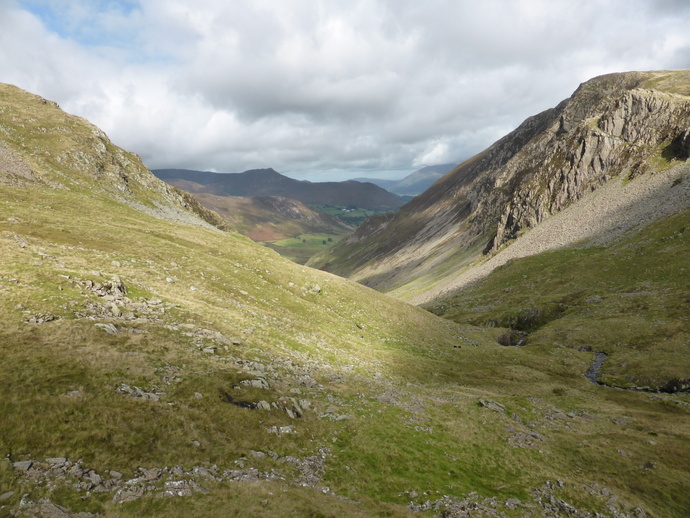 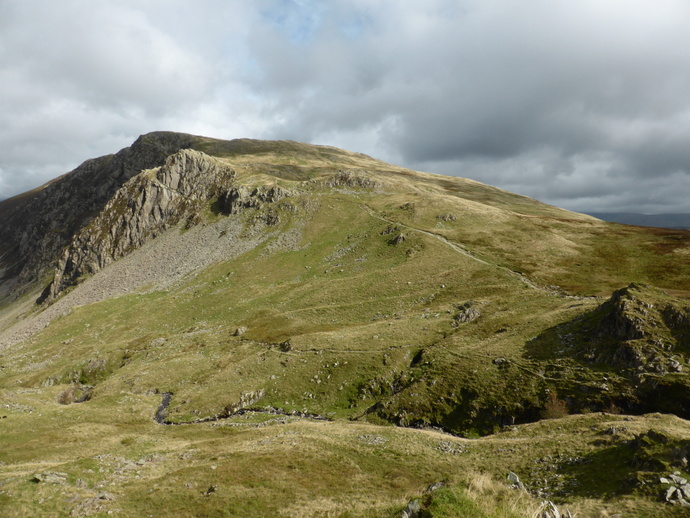 Moving on from the tarn the obvious path on the ground up to Dale Head is the minor one marked on the map that heads to Dalehead Crags. This path is an improved one in places consisting of rocks embedded in the ground to provided a semi stepped path with grass between them, on probably older work but not on the newer work higher up. As one gets to the top of Dalehead Crags looking back one sees over Wilson's Bield down to the floor of Borrowdale, with Watendlath Fell behind & over that to Helvellyn -where I'd walked the day before & its partners (Pic 10). Heading on to Dale Head itself the path is worn into the stony ground, with zig zags to help moderate the slope. The higher you get the more the views open out, reaching the summit you get another attractive cairn (pic 11), the full magnificence of the length of Newlands Valley (pic 12) aimed at Skiddaw in the distance and in my case the ridges where I'd come up, on the right & where I was going down, the left. I spent quite a time at the summit taking in the views and chatting to a man waiting for a group. 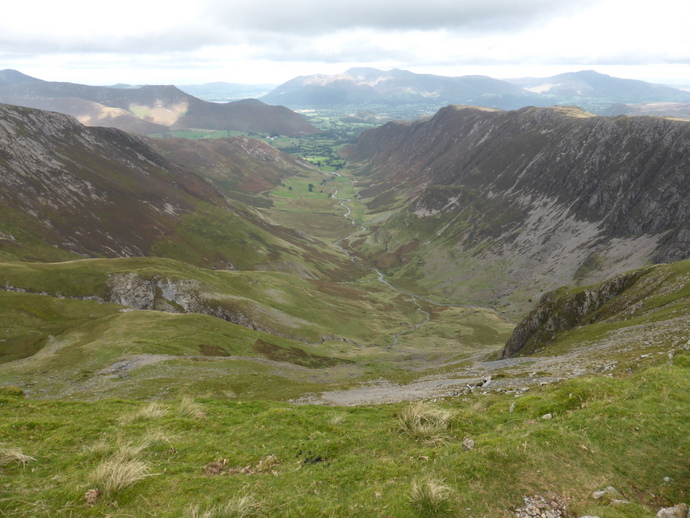 One thing to note is that hereabouts the natural rock formation sticks up like the spine of a stegosaurus - ideal for tripping and stubbing toes. Looking S (pic 13) one sees the green band of the top of the path up from Honister, the easy way to get to Dale Head, pointing at Grey Knots with , Green & Great Gable behind, on which I'd been on day 2, almost merging. 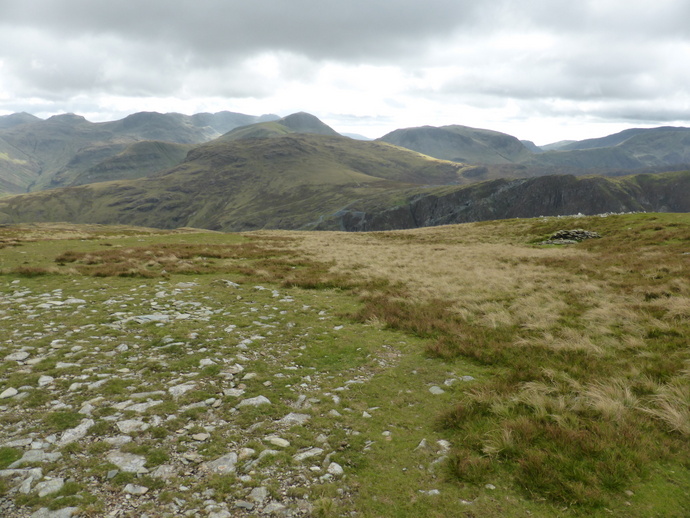 Moving on onto Hindscarth Edge one gets to see down to Buttermere (pic 14) with High Style & Red Pike the peaks plus slowly altering views down Newlands. 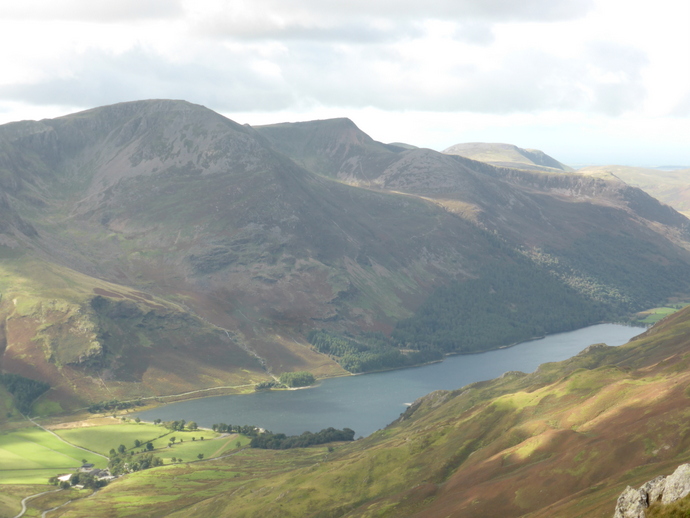 The path on to the top of Hindscarth is your more normal easy going stone track. However the top does have some rocks but nothing special & being broad shouldered the views are more limited. Having left the top one then gets to see the way ahead down the left ridge (pic15), but as you drop the higher fells to your left & right block distant views. 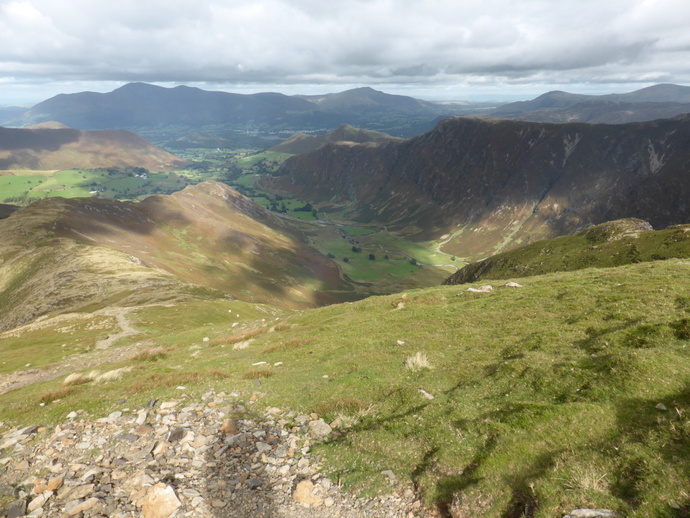 Further on down towards Scope End you then see back up Newlands (pic 16) with the fells on the sides dominating more and the end and know that you've just walked over them. 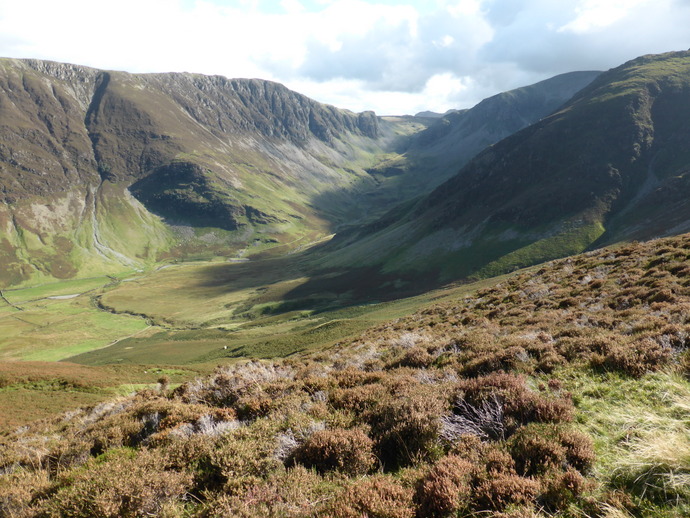 At Scope End there is still the view ahead (pic 17) over the lower end of Newlands towards Skiddaw, plus the track that was my way on back following the bottom of the slopes on the right. 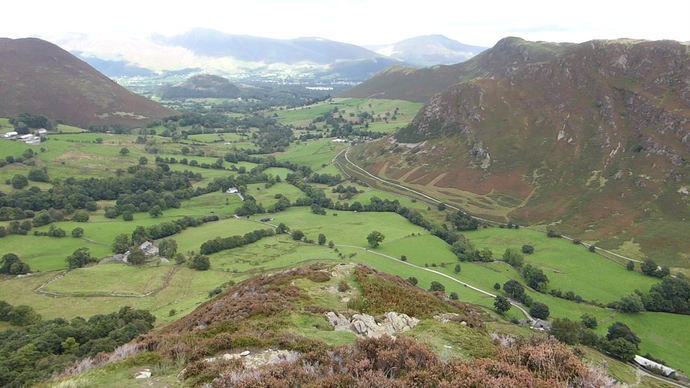 Moving on the path became quite hard going downhill with bits of scrambling & water erosion having cut channels with drops into them.

Down in the valley bottom the paths are well signposted at this point, with a bridge to aid you across Newlands Beck. From here on I was following the track around the bottom of Cat Bells, although I did go wrong in not checking my progress more carefully as I missed the path that bypasses Lttle Town, instead only realising I'd gone wrong as I rounded the bend and the Hamlet came into view, so I backtracked until I could see the path on the bank above then cut directly up. Back on track is was a speedy bit of walking onto the old mine workings around Yewthwaite Gill, where I forded it, for obvious reasons rather than take the bridge (Pic 18), the water was only about an inch deep thankfully. 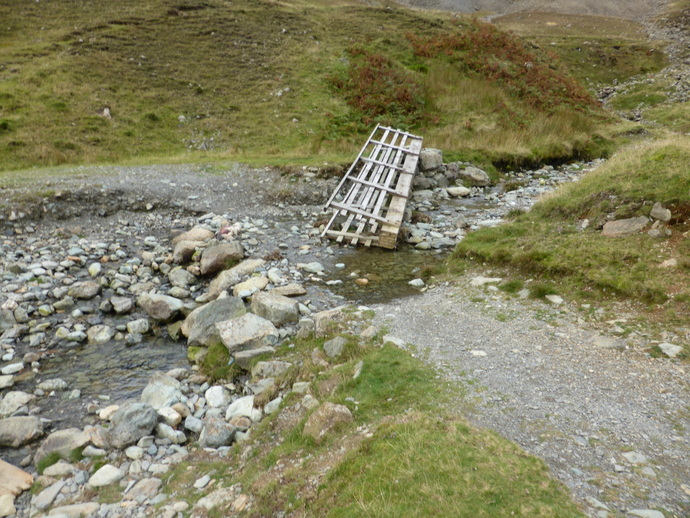 From there it was following the track onto Skelgill where one hits the road for the final few hundred yards back to the car park.