A gloriously sunny start to the day saw me returning to the area of the North-Western Fells, for a round walk from Causey Pike to Grisedale Pike. The sunshine gave way to hazy high level cloud in the afternoon, before clearing again to give the promise of a superb spring-time evening. I had hoped that, (based on present conditions around Helvellyn's higher slopes), there would have been a good amount of snow underfoot, but apart from the western slopes of Crag Hill, (towards Grasmoor), where there was good deep snow cover, the white stuff was fairly patchy, so although carried, there was no need on this particular walk to make use of the ice-axe and crampons. Starting from a roadside pull-in, adjacent to Stonycroft Bridge at Stair, I decided to take the most direct path up to Rowling End. - Quite a steep ascent, but height is gained quickly for the effort involved, and the extensive views begin to open out right from the very start. Once on the ridge it was an easy stroll across Rowling End's flat top towards Causey Pike - The very first Fell that I ever climbed in the Lake District, way back in 1970! - and which requires a nice if somewhat short rock scramble in order to gain its summit. From Causey Pike it was onwards across Scar Crags, and then up the zig-zag path to Sail, before continuing on to the highest point of this ridge at Crag Hill summit. After a short break for a bite to eat and a drink, I then headed generally westwards towards Grasmoor, descending as far as the col, before turning northwards to continue the descent to Coledale Hause. From Coledale Hause, it was onwards and upwards. with the ascent of Sand Hill and Hopegill Head, before turning eastwards, skirting the Hobcarton Crag ridge towards the final main fell of the day, Grisedale Pike. Then came the long descent over Sleet How and Kinn, down to Braithwaite village, before taking the fell-side footpath through the area of Braithwaite Lodge / Little Braithwaite, and the final leg along the road back to Stonycroft and the car. Another great day in the Lakes!

Looking up to Causey Pike from the flanks of Rowling End at the start of the walk. (Near to Stonycroft Bridge): - 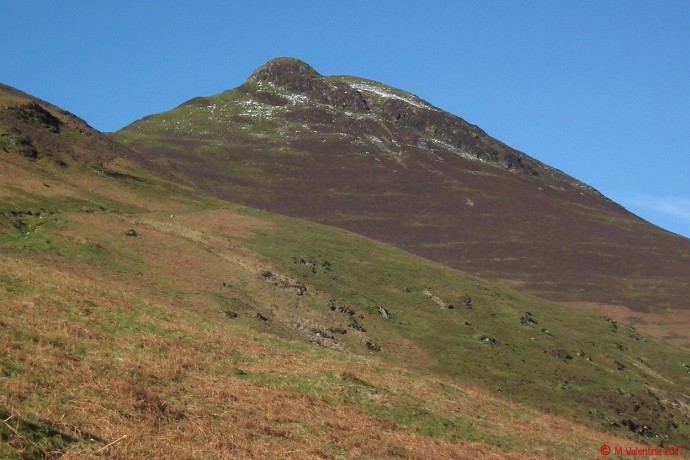 Looking across the vale of Keswick to the Skiddaw massif, from the flanks of Rowling End: - 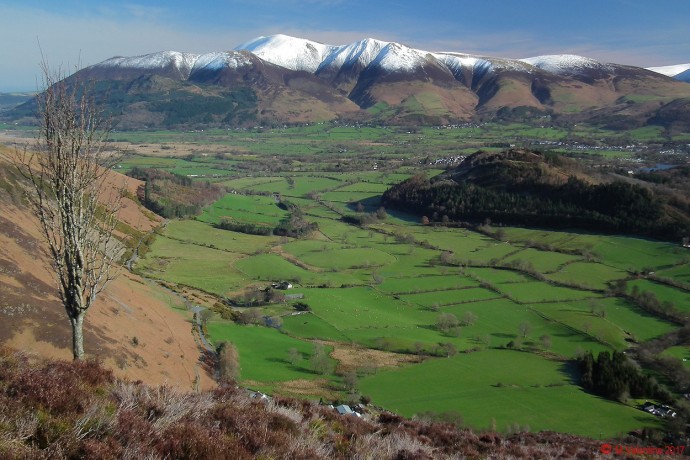 Nearing the flat ridge along Rowling End now, and the head of Newlands valley comes into view - with the crags of Dale Head dominating the scene, and Great End just peeping out over Dalehead Tarn col: - 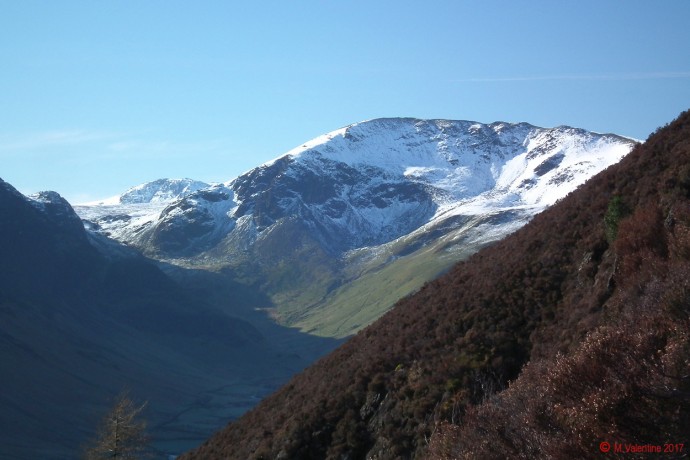 The route ahead - Looking up to Causey Pike and the ascending ridge to Scar Crags and Sail - With Wandope beyond, and Ard Crags at extreme left hand side: - 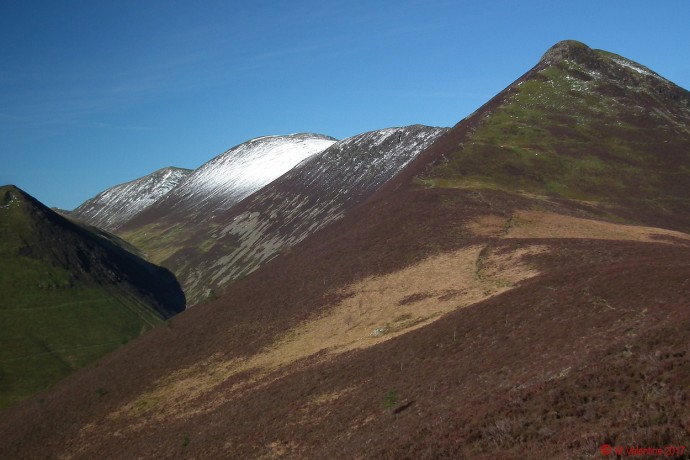 Looking across to Sail, with Crag Hill beyond, from the summit cairn on Scar Crags: - 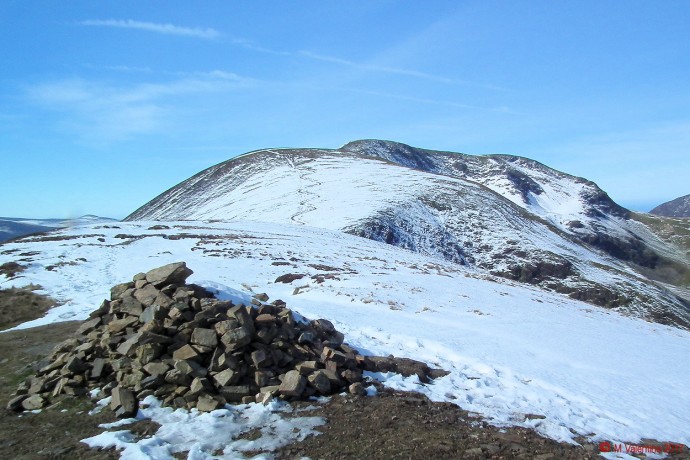 Looking across from Scar Crags summit to Coledale Hause. - Crag Hill to left, Sand Hill and Hopegill Head to right, with Gasgale Crags and Whiteside in the distance: - 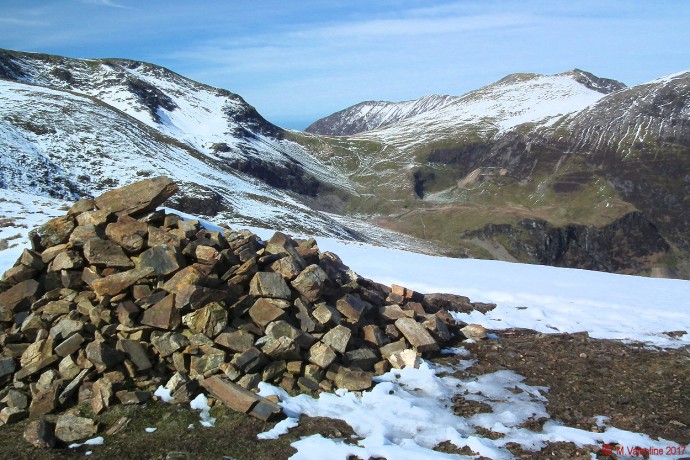 Almost at the summit of Sail. - The view back down the zig-zag path, with the ridge across Scar Crags and back to Causey Pike beyond, and the Skiddaw/Blencathra Massif in the distance: - 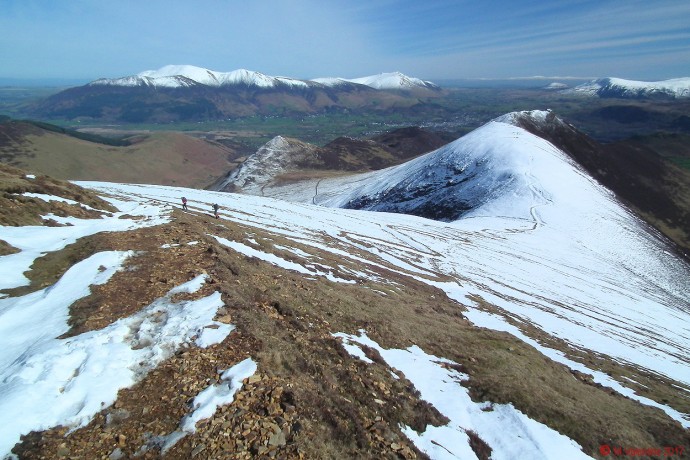 A "zoomed-in" shot taken near the summit of Crag Hill, looking down on Force Crag Mine: - 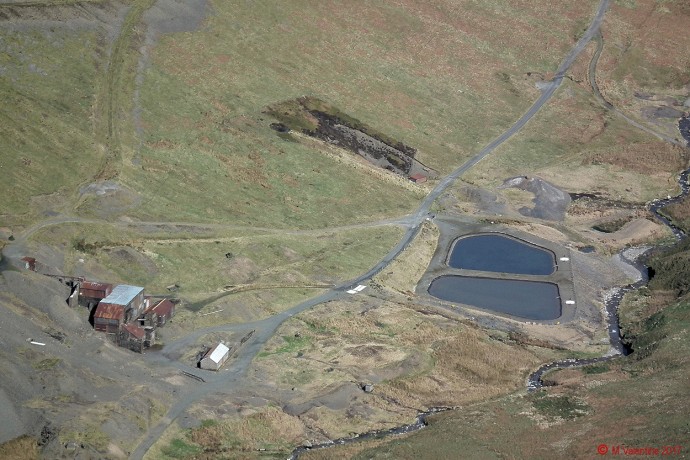 Looking across Robinson, to the "Lakeland Giants", from the summit plateau of Crag Hill. On the horizon, the photo shows: Bowfell, Esk Pike, Great End, Ill Crag, Broad Crag, Scafell Pike, and Scafell. - With Great Gable and Kirk Fell in front, and Haystacks in front of them: - 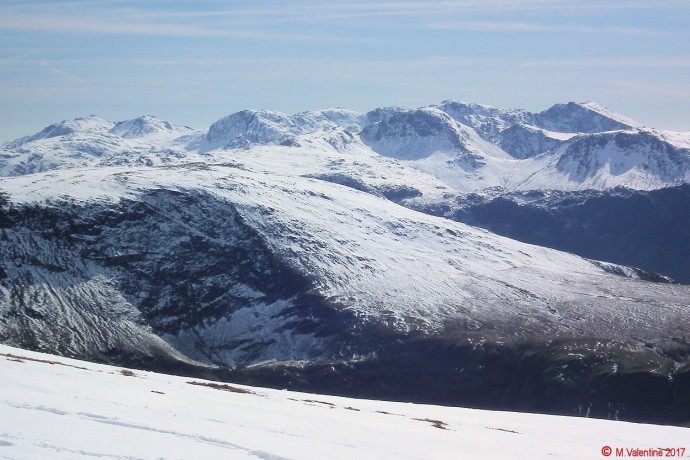 Having now descended to Coledale Hause, a view looking back to the crags of Crag Hill, from the flanks of Sand Hill: - 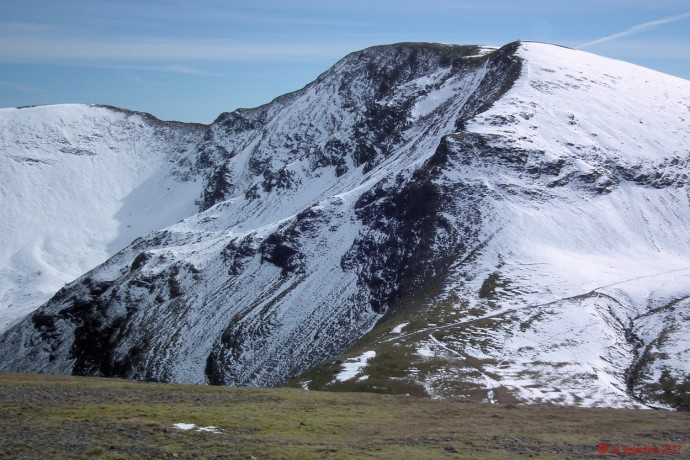 A very clear view of the Isle of Man - taken looking westwards from the flanks of Sand Hill: - 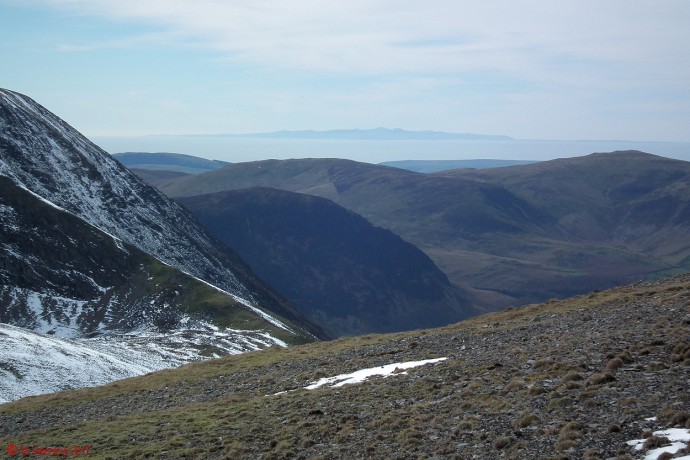 Looking westwards along the Gasgale Crags ridge to Whiteside, from the summit of Hopegill Head: - 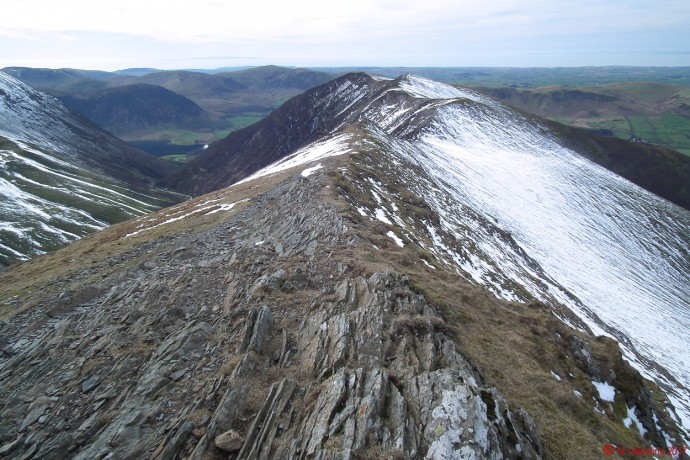 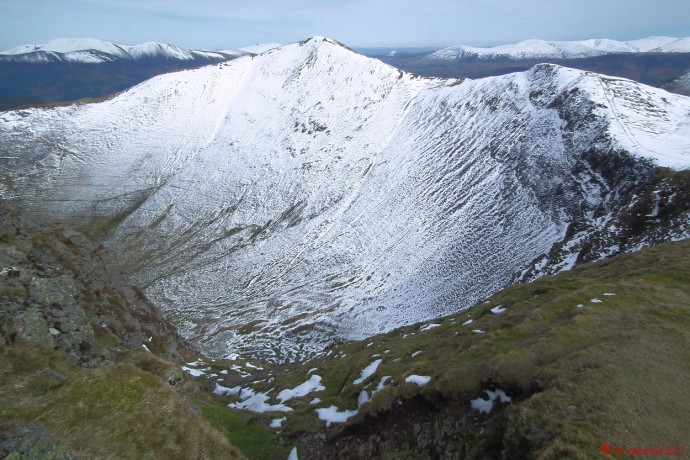 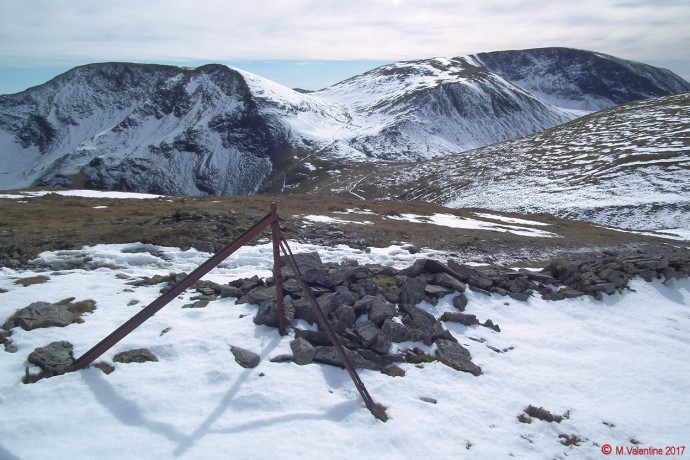 Looking back to Sail and Crag Hill from Grisedale Pike summit ridge: - 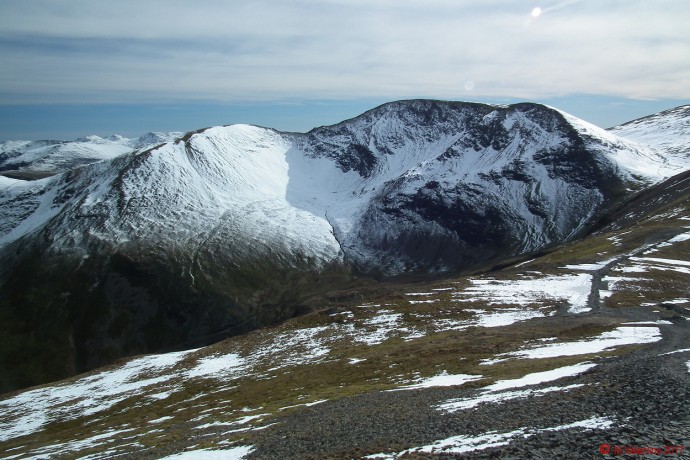 Coming to the end of the walk - the descent route across Sleet How, with Braithwaite just peeping out beyond Kinn, and the wide expanse of the vale of Keswick beyond: - 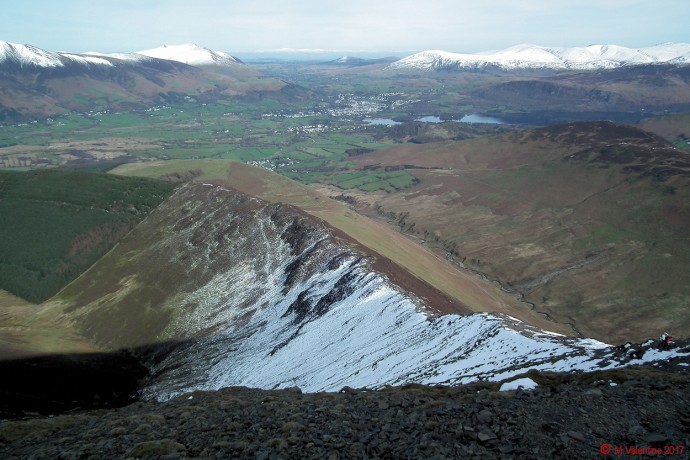