Weather forecast was predicting a for the most part sunny day, so I headed back to the Lake District on Wednesday (12th July) for another wander on the fells. - This time to do Red Screes and Middle Dodd, two tops I hadn't previously visited, along with several more that I had.

Starting from Cow Bridge car park beside Brothers Water, I walked past the lake to Hartsop Hall, and then took the footpath across the intake fields, heading towards Scandale Pass. Not long after passing beyond the "Settlement" (site of antiquity), my route deviated away from the Scandale Pass track, crossing the footbridge over Kirkstone Beck, and onto the lower flanks of Middle Dodd.

A relentlessly steep and pretty much pathless pull up to Middle Dodd, eventually gave way to easier ground on the approach to Red Screes. From which summit, extensive views towards Windermere and the Morecambe Bay coastline were to be had.

From Red Screes, it was down to Scandale Pass and then up to Little Hart Crag summit, before taking a descending traverse across to the summit of High Hartsop Dodd. Then it was back up towards Little Hart Crag, (this time skirting the actual summit), and across Bakestones Moss, to the very well-constructed "Dale Head"-like cairn on High Bakestones.

During lunch at High Bakestones, the sun gave way to a large bank of cloud coming in from the west, which then persisted for a couple of hours, slightly taking the edge off photos taken during that period. - Still, the weather will do what the weather will do!

From High Bakestones it was an easy stroll across to the ridge-line, picking up the main "Fairfield Horseshoe" path as far as Dove Crag. Where, after visiting the summit, I descended to the col, and then headed off down into Houndshope Cove in order to make my way across and up to the Priest's Hole Cave. (Slightly tidier than found on my last visit, but the "visitor books" have now completely disappeared - see footnote below).

From the cave, it was back up to the col, and onwards to Hart Crag summit before descending back to valley level via the Hartsop above How - Gale Crag - Bleaberry Knott ridge. There was nothing to be gained by following the ridge all the way down to Deepdale Bridge, (which would then mean a road walk back to the car), so instead, I took the steep path which drops through Low Wood, directly back to Cow Bridge car park. Another great day in The Lakes!

Elevation Profile for the walk: -

Having walked past Brothers Water, and now approaching Hartsop Hall, Middle Dodd can be seen left of centre, with a still cloud covered Red Screes behind. High Hartsop Dodd and the ridge leading across to Dove Crag are seen towards right hand side of shot: - 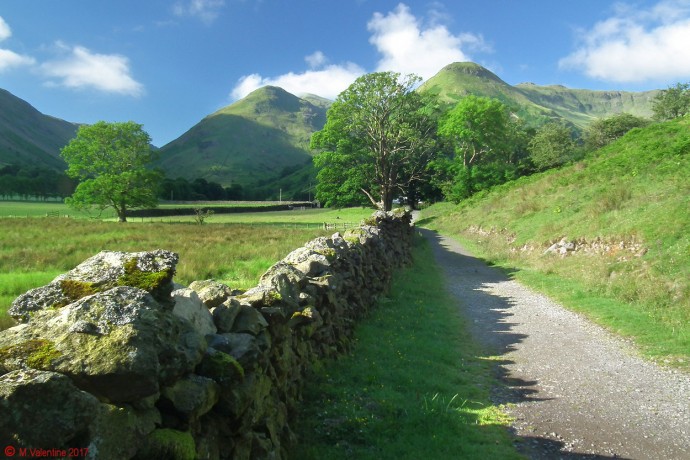 Cloud not yet lifted from Dove Crag. (As seen from the intake fields of Hartsop Hall farm): - 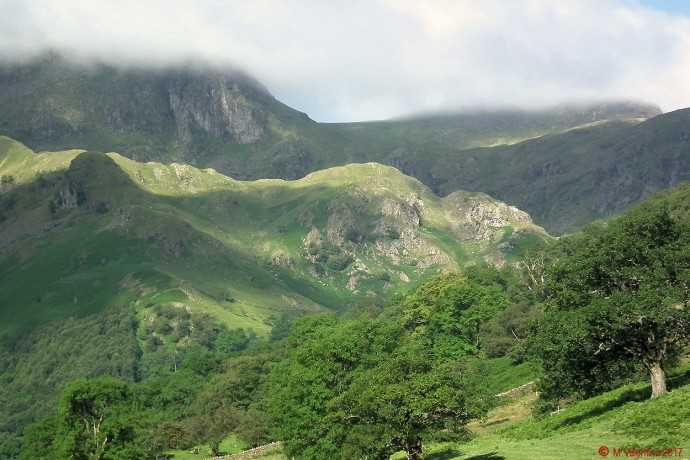 Looking back to Brothers Water, with Angletarn Pikes and Place Fell beyond. (As seen from flanks of Middle Dodd): - 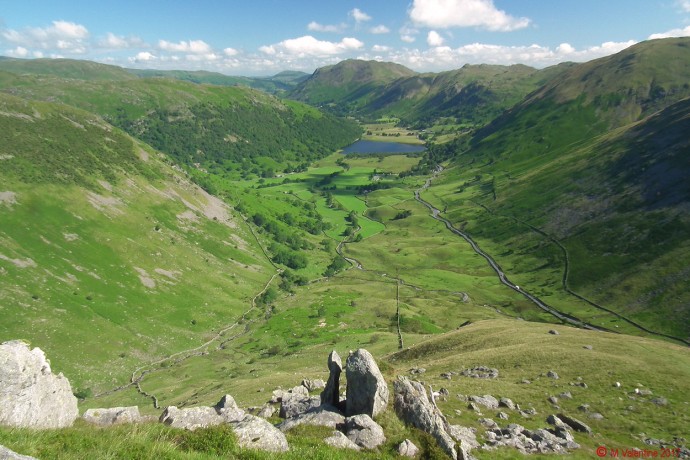 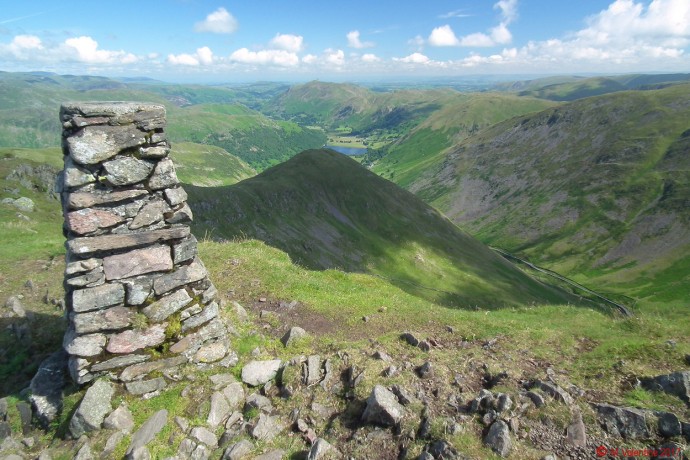 Windermere and the coast, from Red Screes summit: - 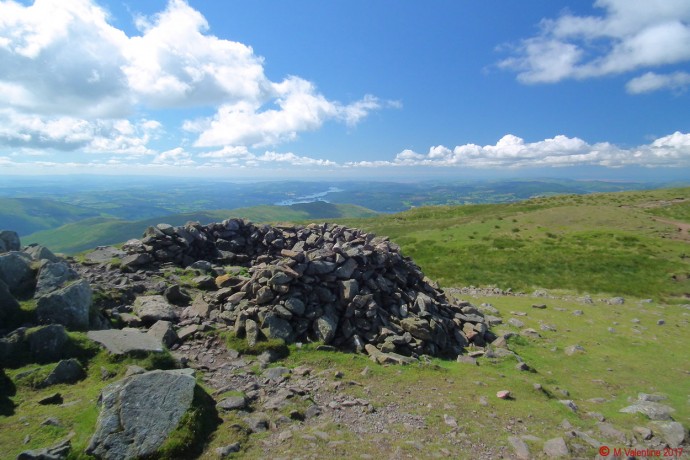 Looking up to Little Hart Crag from Scandale Pass: - 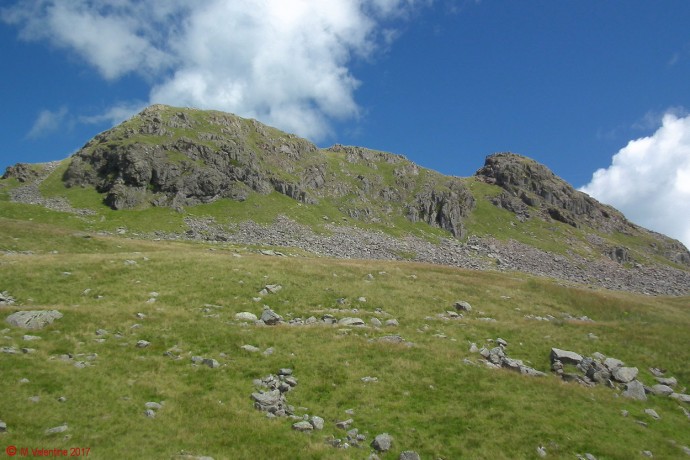 The view towards Windermere from Little Hart Crag summit: - 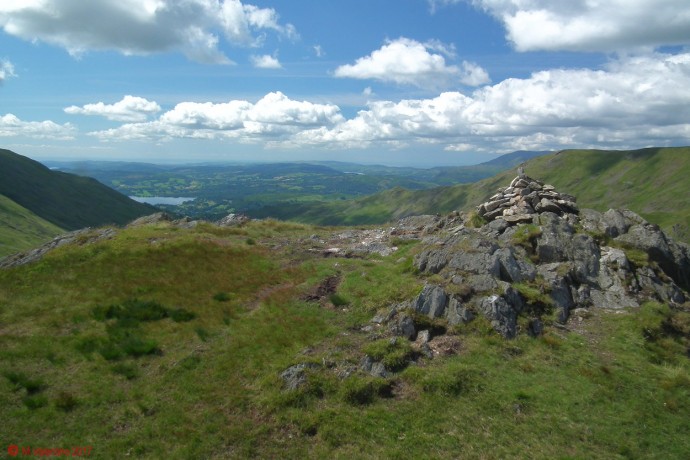 Dove Crag, with Hart Crag - (in shade), and Fairfield beyond. (As seen from High Hartsop Dodd summit): - 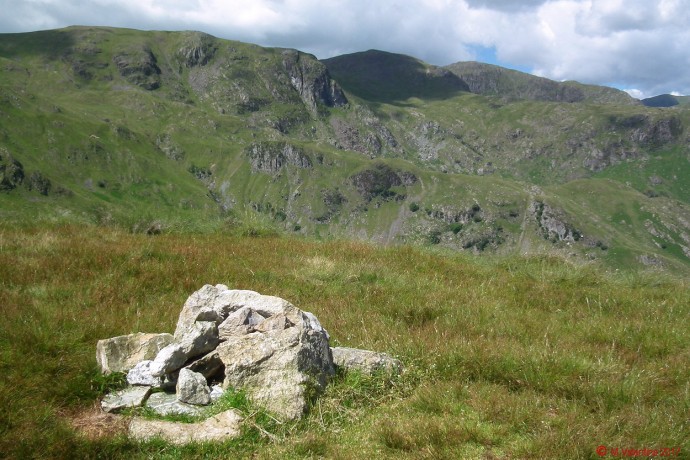 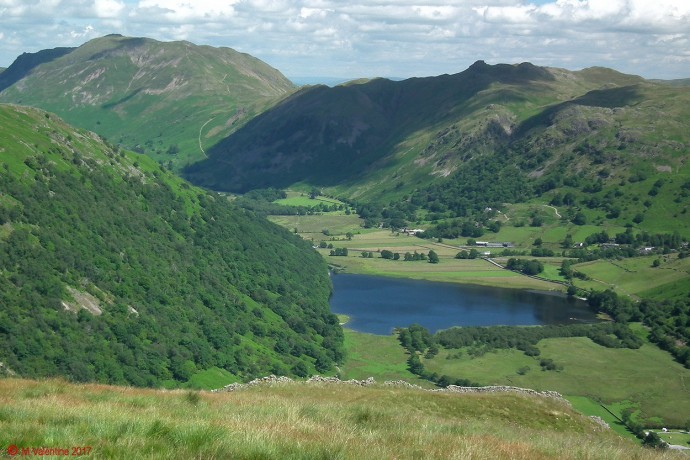 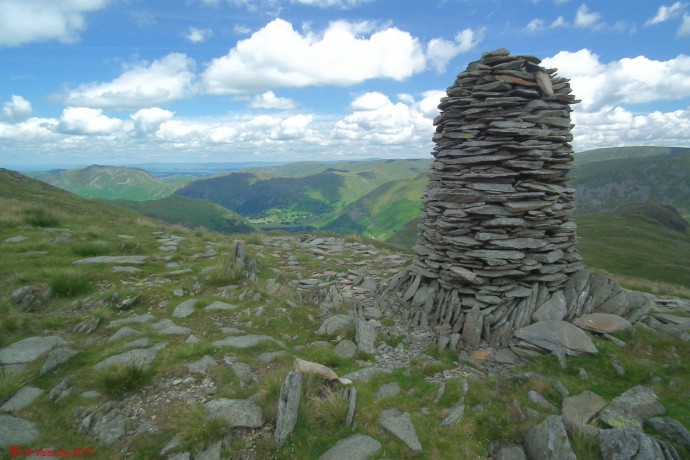 Windermere, with Morecambe Bay beyond. - As seen "zoomed-in" from High Bakestones plateau: - 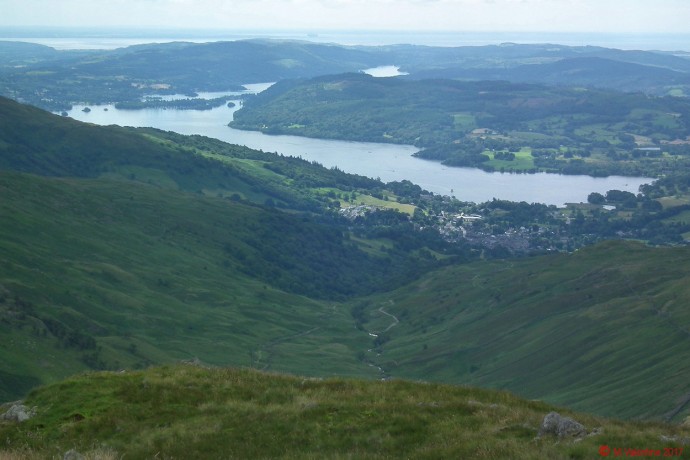 Looking towards Windermere & the coast, from an overcast Dove Crag summit: - 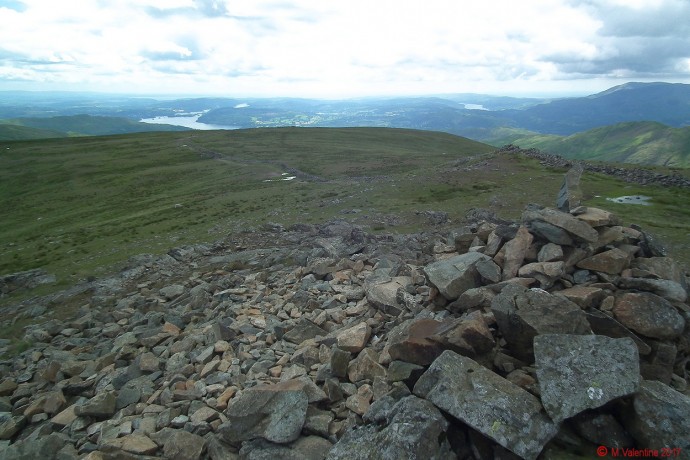 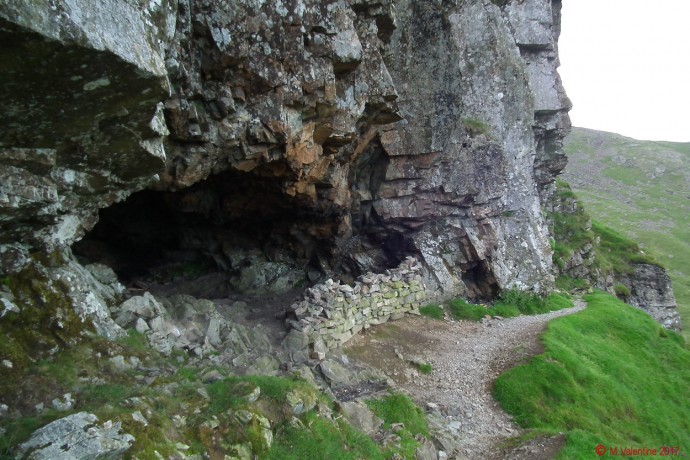 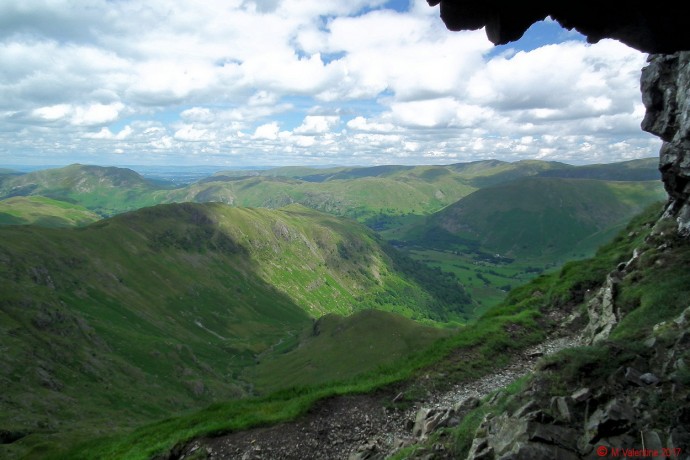 The view from the Priest's Hole Cave "balcony": - 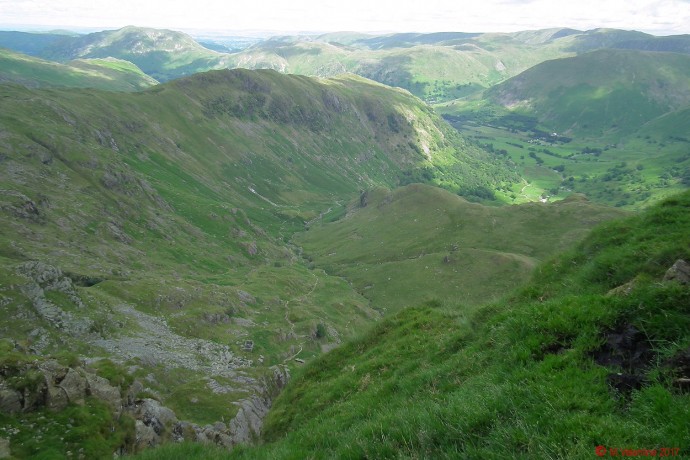 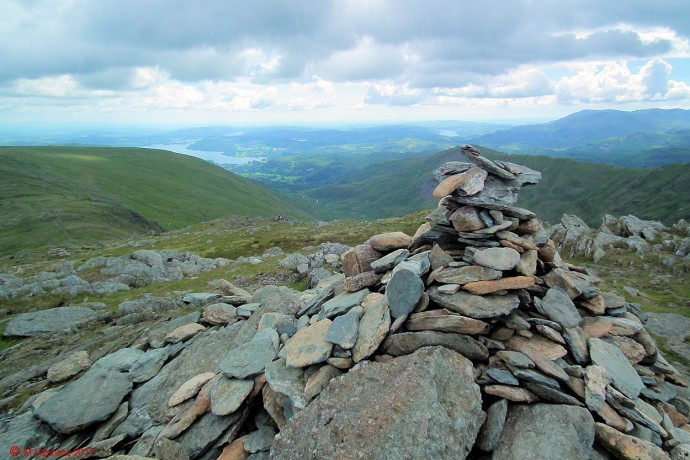 The sun begins to come out again - but Striding Edge remains resolutely under cloud! (Taken from Hart Crag summit area): - 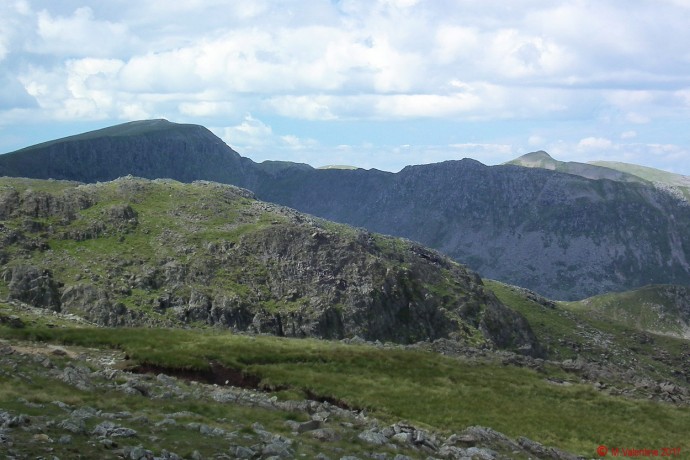 Looking back in the direction of Link Cove and Greenhow End, from Hartsop above How ridge: - 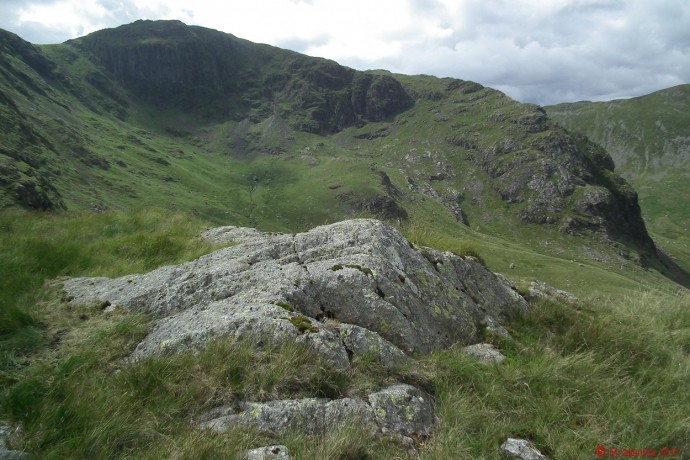 The Priest's Hole Cave on Dove Crag, as seen from Hartsop above How ridge: - 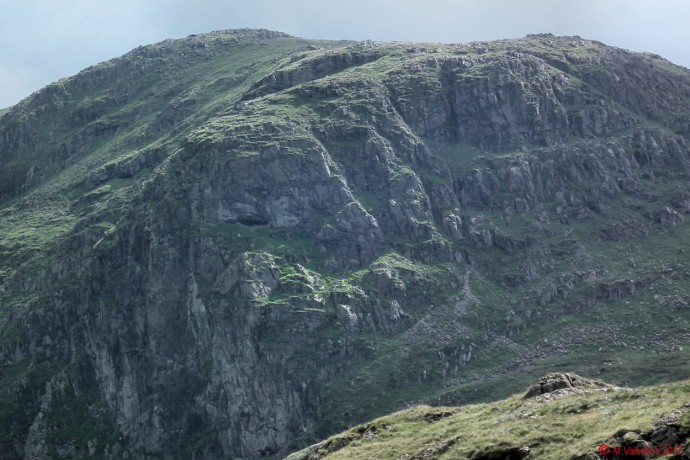 Coastguard Helicopter - Employed in many mountain rescue call-outs. (A quick "grab-shot" as it passed above Dove Crag): - 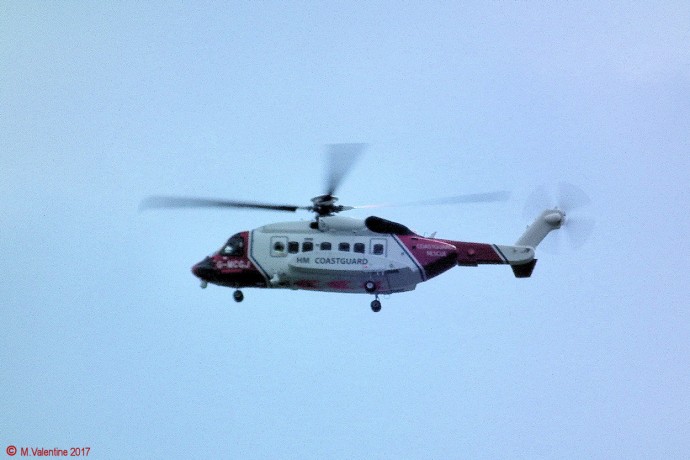 Looking back to Dove Crag from Hartsop above How ridge: - 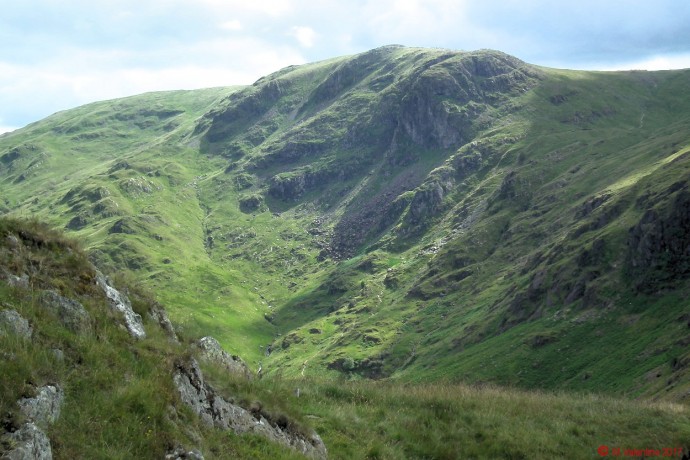 Looking back up the Hartsop above How ridge to Hart Crag, Fairfield, Link Cove, and Greenhow End: - 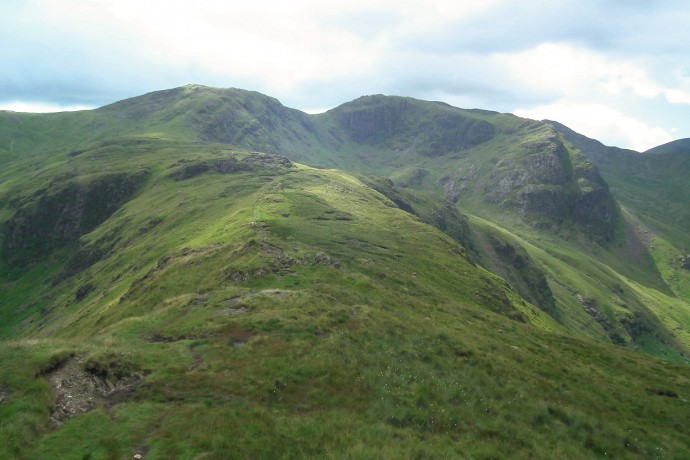 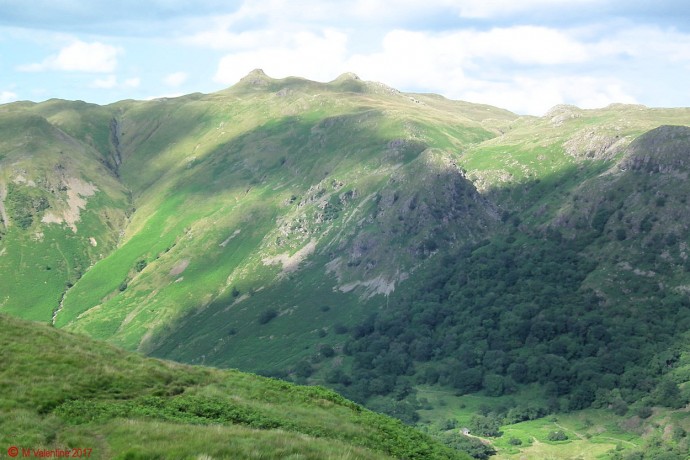 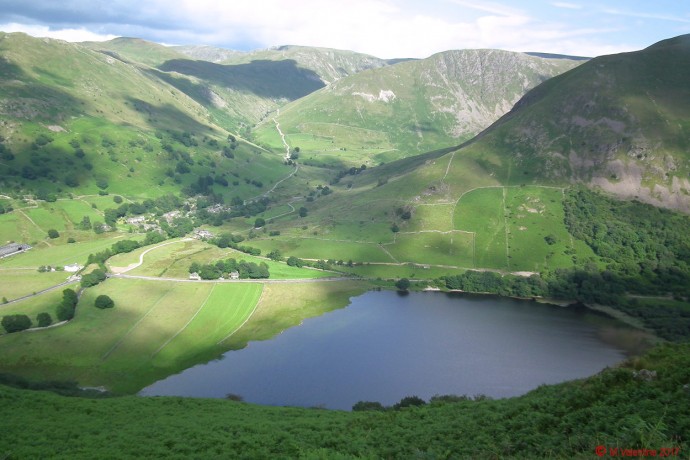 Footnote: I was pleased to find the Priest's Hole Cave somewhat tidier than on my previous visit. (See: - viewtopic.php?f=14&t=413 ) - Unfortunately, the visitors books are now a thing of the past, gone forever - another of Lakeland's fell-walking traditions lost! - Probably thrown away or burned as fuel by someone of the same mental capacity as the simpletons who perpetrated this graffiti on the cave's wind break wall.

Breezemount Shufflers, et al, - you should be thoroughly ashamed of yourselves!!!!!!! 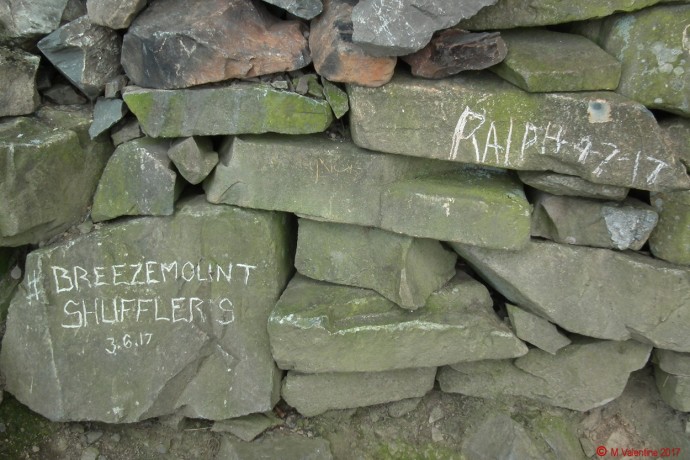 Another (many years ago comment!) and I don't remember a lot about it but I think we walked alongside Brothers Water and then at some point climbed up onto Hartsop Above How ... I don't remember the Hall and I certainly didn;t tackle Hart Crag! So just how we got up on the open ridge out of the wood I dunno? But I do remember the view across the lake and the surrounding hills before coming back down to Cow Bridge Car Park ...

I too have several walks from the dim and distant past, (I'm talking in the region of about 40 years ago), where I hardly remember doing the walk at all!

One in particular, around the back of Skiddaw, (Great Calva. Little Calva, etc.), I can't recollect doing the walk at all! - I don't have any photos, just a black line marked on an old OS 1-inch Lake District Map, (1974 revision - price 95p!), as evidence that I ever did that walk.- However, a friend who was with me at the time clearly remembers various things that were seen on the day.