Just wanted to share a walk I did back in May, following in the steps of Lancashire Lad, after seeing his posting of the walk. 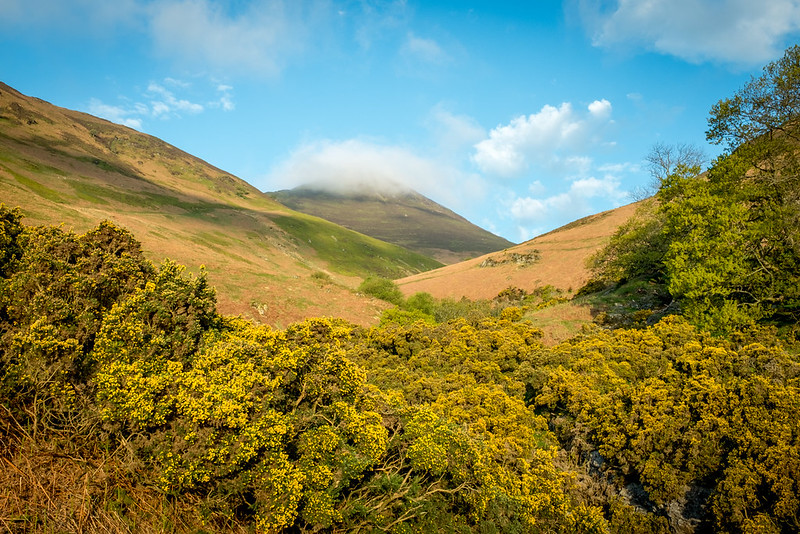 I set off from Stair/Stoneycroft shortly before 7am, heading for Rowling End, pleased with myself to have successfully navigated the mini networks of paths on approach. Rowling End is good fun, and hard work. The early morning light offering some nice views behind...

View east from Rowling End by Oliver Coats, on Flickr

A little bit of respite before the next climb. The ascent of Causey Pike... 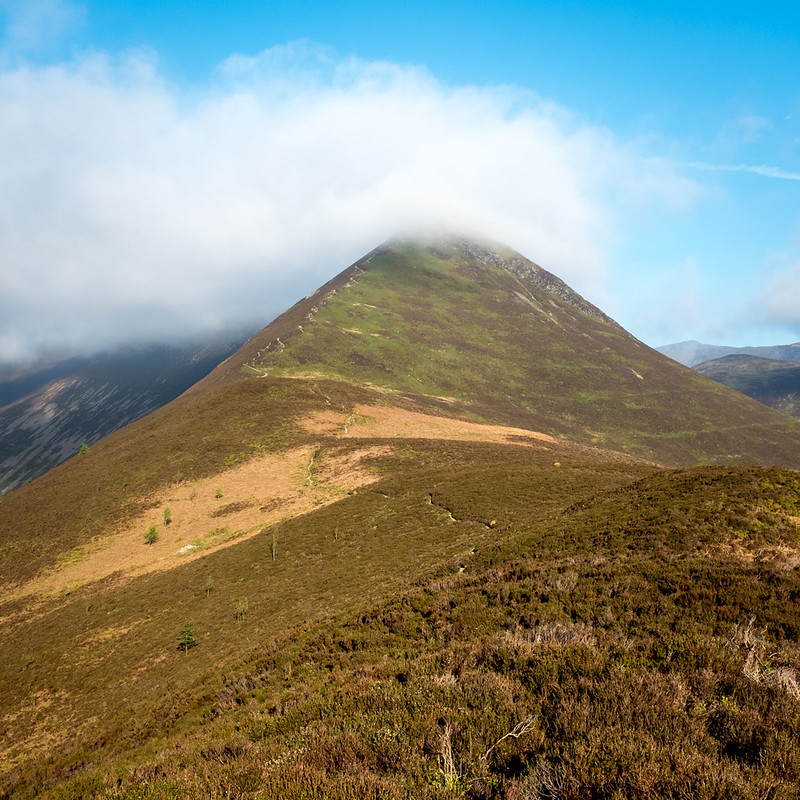 When nearing the top, you can look back at the 2 different routes you can take to get here... 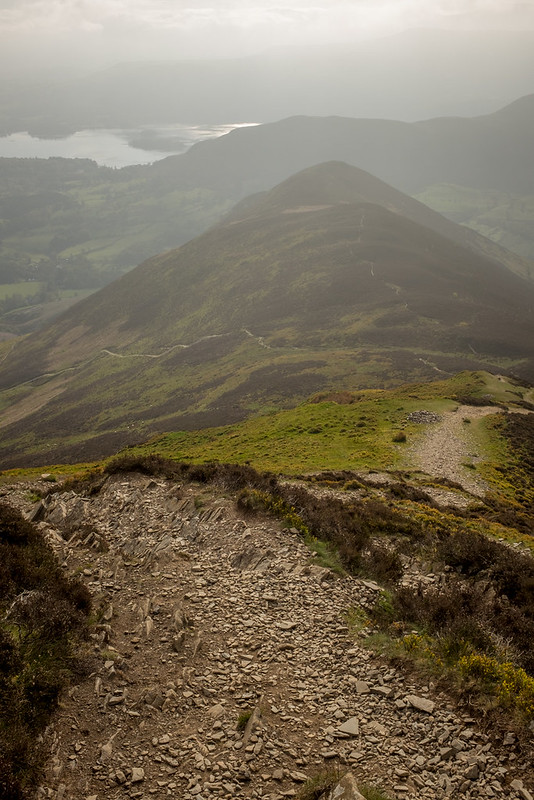 The distinctive summit of Causey Pike by Oliver Coats, on Flickr

Very windy here, but a great view of the route ahead, from the summit...

Scar Crags to the left, Grisedale Pike poking through the cloud to the right - the final summit of the day. by Oliver Coats, on Flickr

So from Causey Pike there are many ups and downs leading you over Scar Crags, Sail and up to the highest point of the walk, Crag Hill (Eel Crag)... 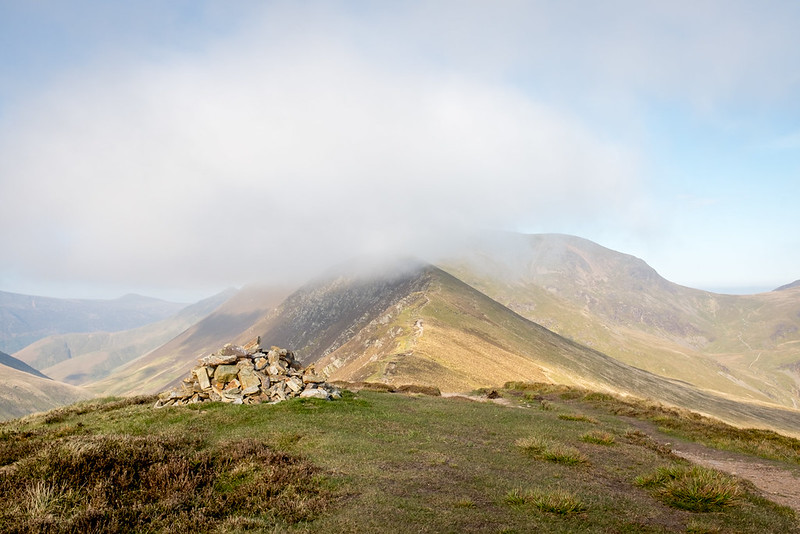 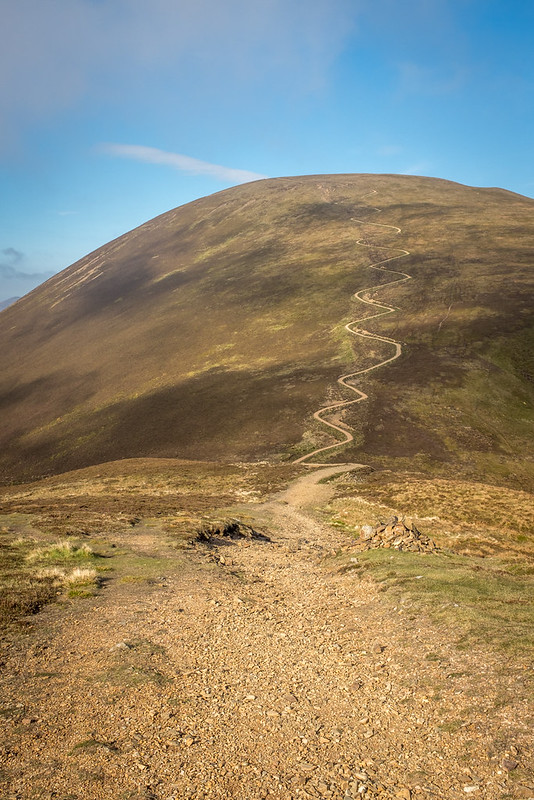 Heading down the west side of Crag Hill I pass the first walker of the day. Grasmoor ahead, but I'm turning right, for Coledale Hause. There are a few options at this point if you wanted to head down the Coledale Valley or to short cut past Hopegill Head. But I'm heading up Sand Hill, towards Hopegill Head.

Sand Hill and Grisedale Pike from Coledale Hause by Oliver Coats, on Flickr

A glimpse of Loweswater from Coledale Hause...

Sand Hill is a steep scree path requiring a bit of effort to get up. Then there's a final click to reach Hopegill Head.

It's only in the last couple of steps up on to the summit of Hopegill Head, that you discover the fantastic views that it has to offer. The north end of Cumbria is suddenly revealed. This was actually on a day when there was a Helm Bar cloud over Carlisle (just to the north of, if I remember correctly), but too much cloud in between to be able to see anything from this particular viewpoint, and probably too far away, anyway... 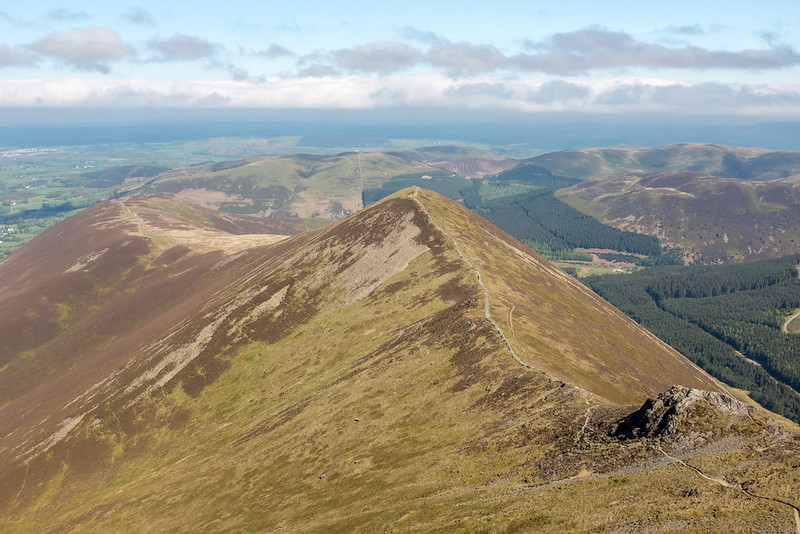 North from Hopegill Head by Oliver Coats, on Flickr

Turning around for a panorama. Sand Hill on the right, and the path ahead to Grisedale Pike, on the left...

So I head off along the top of Hobcarton Crag. It's only when you've reached the other side that you realise how impressive it is... 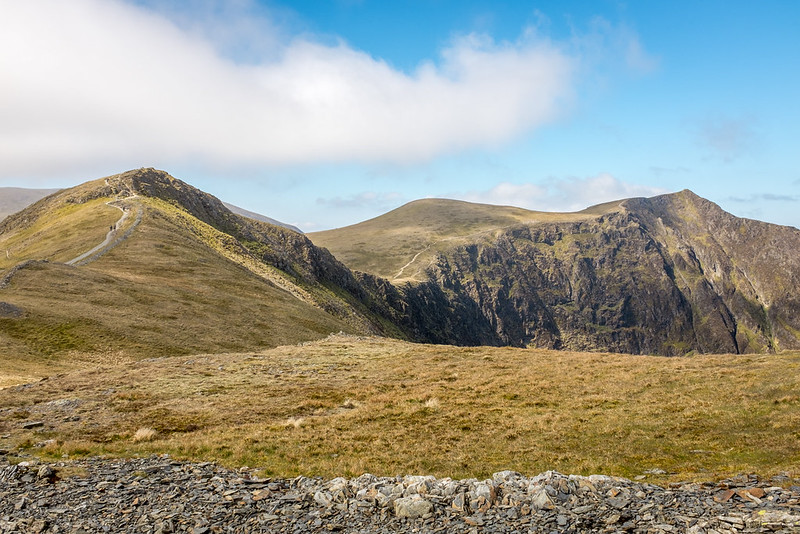 You also get a nice view of the other side of the horseshoe from here, giving you a profile view of the first half of the walk...

A final push to the top of Grisedale Pike, and then it's one very long descent to Braithwaite. The first steep section of Sleet How is really good fun. It's loose, but there's enough solid rock protruding through, to be able to use as stepping stones, and staying clear of the loose stuff...

The path levels off briefly, before a very steep grass descent to Kinn. Very hard on the feet, and quite hard on the ground, too... 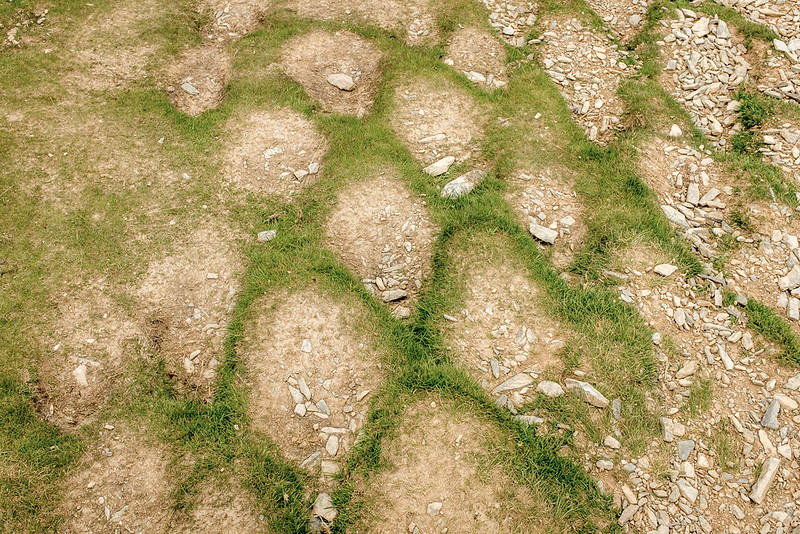 The path finally twists down through woodland above Braithwaite. The huge descent having really zapped energy from my legs. Braithwaite, below... 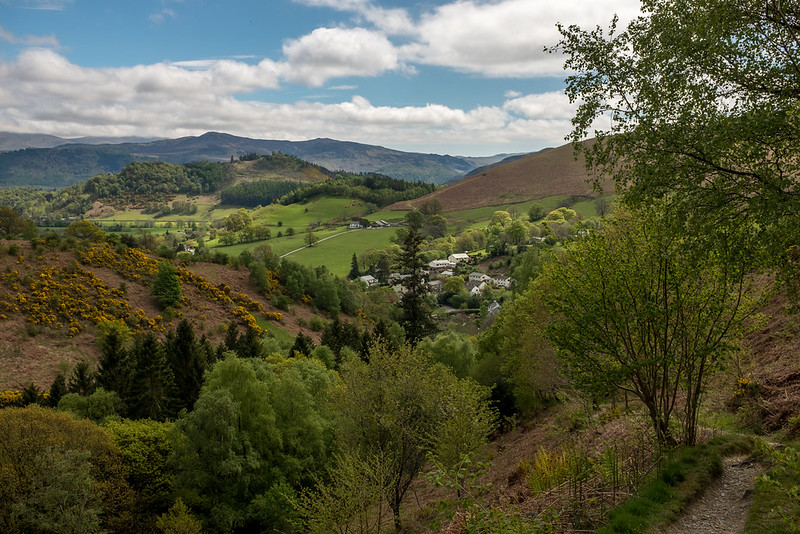 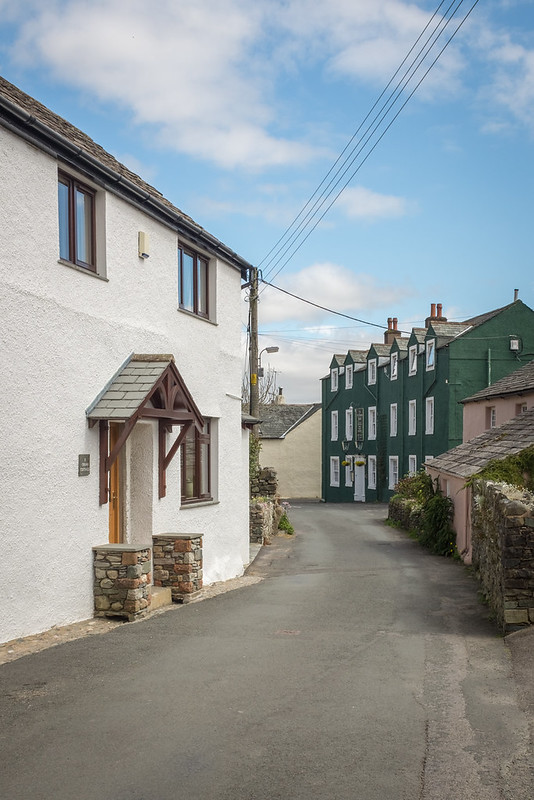 From Braithwaite, the route takes you back to Stair via Braithwaite Lodge, and a final section on road. I was pretty exhausted after this walk, but I continue to work on my fitness, and I really look forward to the day I do this one again, as it's just superb! Highly recommended.

Just wanted to share a walk I did back in May, following in the steps of Lancashire Lad, after seeing his posting of the walk. . . . . .

Super report of a great walk!

(Particularly loving the colour and composition of your first photo looking up to Causey Pike!).

Comparing your GPX track to mine, it looks like your walk almost literally was a footstep by footstep repeat of the walk I did back in March.

And, yes indeed, I can only concur with your comment about the walk: - "it's just superb".

Hi Mike, thanks for your comments.

Yes, I unashamedly pinched your GPX file, so pretty much followed your exact route. Although, to be fair, I'm not sure what other way you could do it.

I did wonder though, I know you did this in the backend of winter, and there was still snow on the ground, but have you, or would you have considered descending Crag Hill via Eel Crag (as it is on the OS map) if conditions allowed? Maybe they did then, I don't know.

When I was making my way up Sand Hill, I did have a good look at it, and there happened to be somebody making their way down it actually, but it looked like slow progress. So I was just wondering how 'doable' it is.

Grasmoor remains the only one of the 'main' tops in the north west that I've not done now, so will head back for that one, along with some of the surrounding flanks.

Still have another walk to post up, which was a lap of Buttermere and Crummock Water, inc. Rannerdale Knotts, so I'll get that written soon.

. . . I did wonder though, I know you did this in the backend of winter, and there was still snow on the ground, but have you, or would you have considered descending Crag Hill via Eel Crag (as it is on the OS map) if conditions allowed? Maybe they did then, I don't know. , , ,

In actual fact, when I was planning my walk, I was intending to descend from Crag Hill to Coledale Hause by this path, shown as a "widely spaced" dotted line, (highlighted by me in yellow), on the OS 1:25000 scale map: - 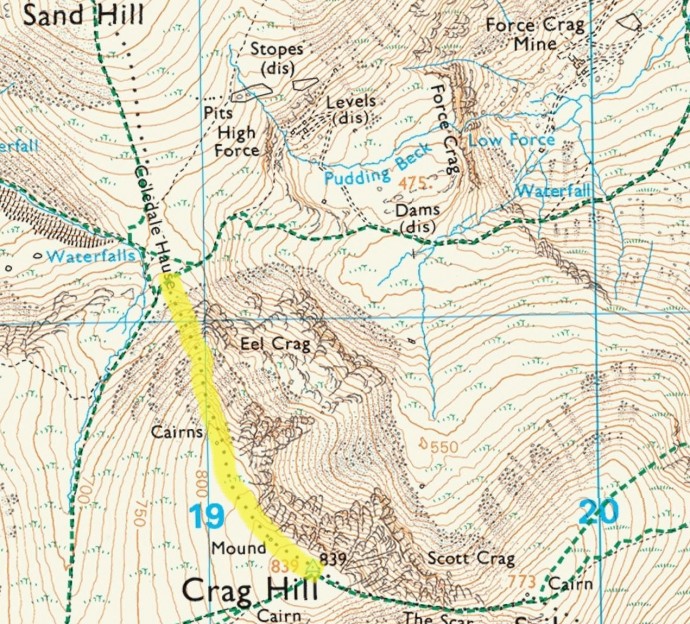 However, I could see from the map that the terrain would be pretty steep, and I was aware, from reading Wainwright, (North Western Fells - Eel Crag 8 - Eel Crag 9), that the marked path would eventually take me across extensive bouldery scree slopes as I approached Coledale Hause.

On the day, in that area, the snow underfoot was quite soft and could not be relied upon to fully support my weight. I didn't fancy the idea of having to cross snow covered scree on an unfamiliar slope, when there was every probability of sinking through and possibly injuring an ankle or leg.

- So I decided that discretion was the better part . . . - and took what I knew to be an easier path instead.

However, in non-winter conditions, (or if the snow underfoot had been a lot harder), I think the intended path would have been well worth doing, as there are some good options for a bit of scrambling in the immediate vicinity.

Yeah, that's the path. I did read up on it before hand, and I decided I would gauge it on the day. But with the vastness of Crag Hill summit, and the very gradual drop off towards Eel Crag, I thought I would have to go so far down to just be able to see whether I like the look of it or not, that I just wimped out and took the easy route.

I'd love to have done it, but I just know that if I came across something I was uncomfortable with, it would have been a very unwelcome walk back up Crag Hill, having already done it once!

Maybe it's a one for ascending, first.

If you ever do it, you'll have to give us an in depth report.