Having read up in AW's books about the area & looked at the walks on this site I bought the walk for the first part to get the best possible understanding of what was ahead. Also chatting to Richard the farmer/owner of the campsite about where I was going, he said that Eagle Crag was one of the best places to go for being alone with glorious views but that Ullscarf was a horrible place that was wet & the cloud would linger when elsewhere was clear and he'd got the experience from gathering the sheep off there. He also recomnded going to Dock Tarn and down rather than the eastern side to Watendlath, but my initial plan was to go on from Dock Tarn to Watendlath and then down but, as I needed to go into Keswick afterwards it was a case of how things were going time wise what the final route would be and here it is -

So on day 2 of my holiday I set off early directly from the campsite, with sun & drifting cloud as shown by this pic from my campsite of Thornythwaite Fell (pic 1) 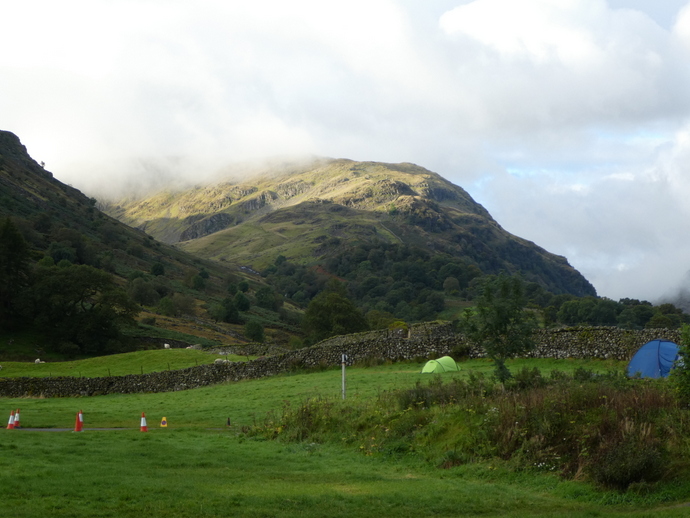 It was then on out through the farmyard, past the chapel to Stonethwaite & over the bridge to start up the left side of Stonethwaite Beck. This is a good track and after a while my first full view of Eagle Crag (pic 2) came into view and I have to say that it was imposing and a bit daunting and I wouldn't want to have done it without the planning. As I moved along I came upon these `gates' (pic 3) that indicate to me that at times they expect a tremendous amount of water and stone movement to be coming down, that would make the path impassable. Approaching the bend & bridge where you turn off the Greenup Gill path one got a view more round of Eagle Crag with the wall & Easy gully above it that you go up (pic 4), although easy is a relative term here. A look up Greenup Gill (pic 5) showed that the cloud was still down on the higher ground. 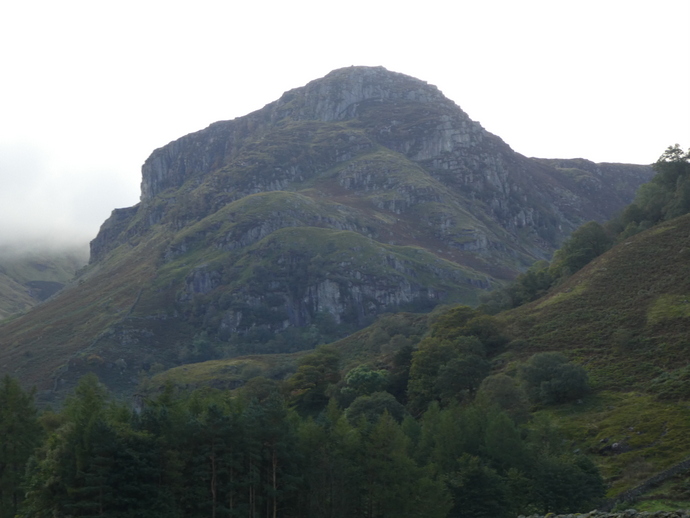 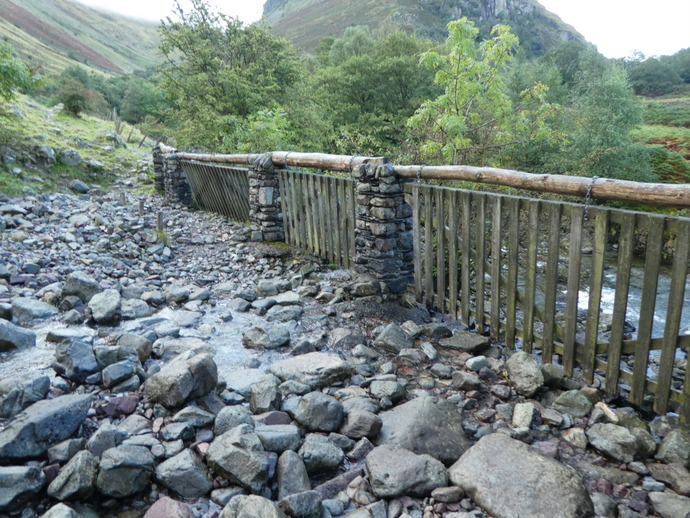 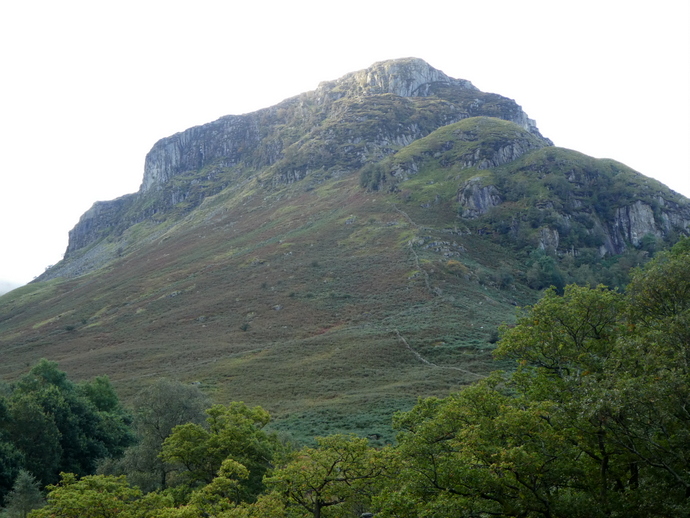 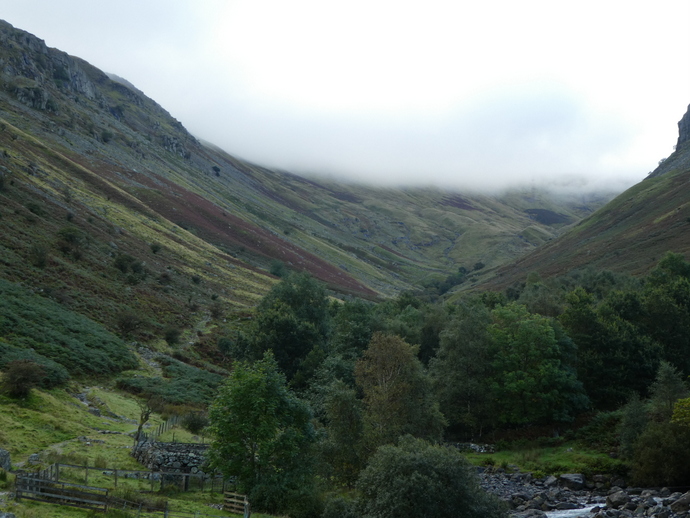 The path now on the SW side of Greenup gill is a bit wet underfoot, although what hasn't been wet this summer & goes through bracken and after the rain in the night wetish legs resulted, turning up hill alongside the wall the steepness begins but the more elevation one gained the less imposing Eagle Crag became, the pull up takes you up to the stile which situated a the top of such a steep slope does require a steadiness. But the views out & down are already good. The first pic shows the wall & slope I'd just come up (pic 6) looking roughly NW with Stonethwaite down in the bottom & High Spy the fell behind, the second (pic 7) down to Greenup Gill & third over Langstrath to Allen Crags (pic 8) which I'd gone over last year. 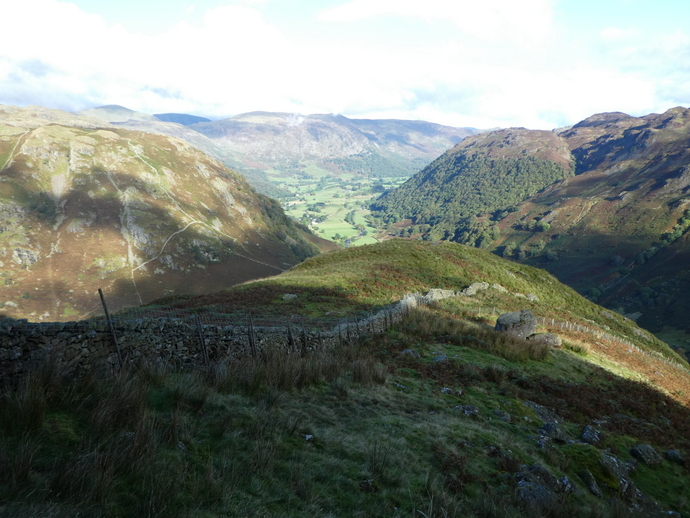 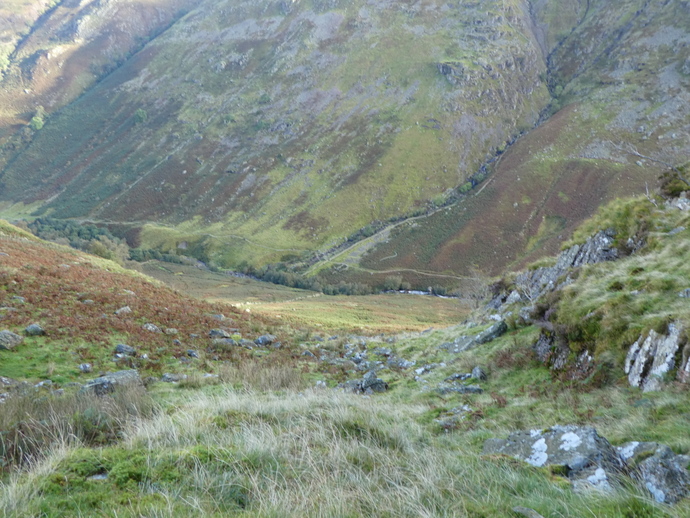 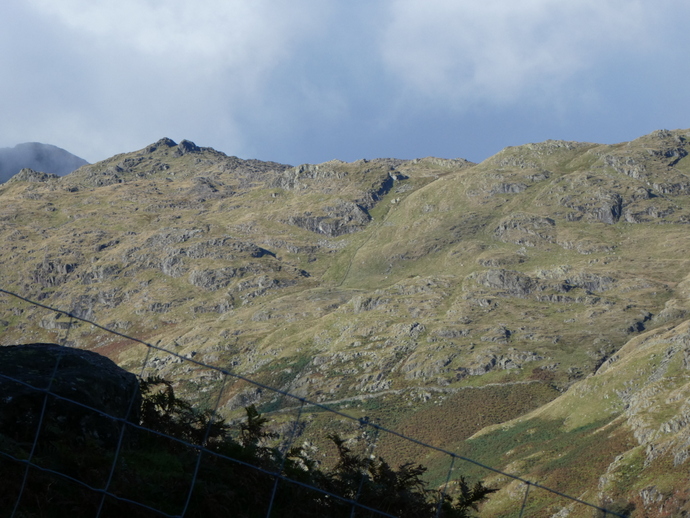 Halfway from the stile to the summit is the terrace going E that you go out on for the view, so it's Dale Head with the cloud on and coming forwards High Scawdel, Thronythwaite & Bessyboot (pic 9). On my walk the passage of the odd person & the wet weather had left a noticeable route up the terraces to the summit but I wouldn't rely on it always being there. 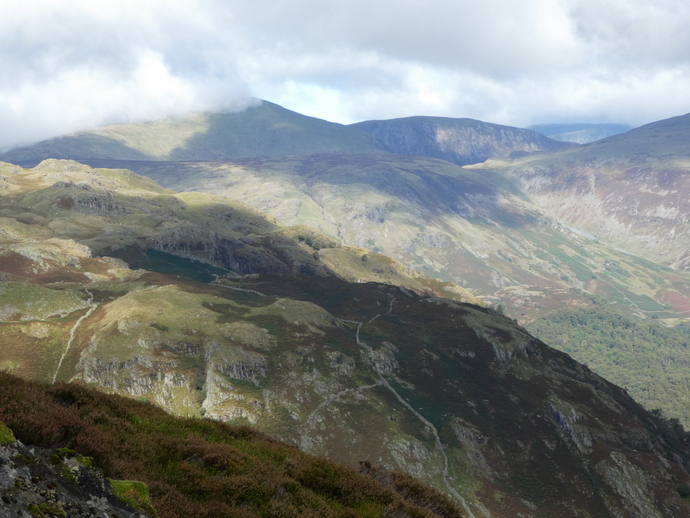 The summit area is a series of sloping rock slabs with a cairn to mark the peak but it's one of the smallest summit cairns I've seen composed of half a dozen stones at most, with good views round this one (pic 10) is the summit cairn with Dale Head just notched by cloud on the skyline behind. It should be noted that this route up is not really recommended as a descent unless known due to the step rock faces around. 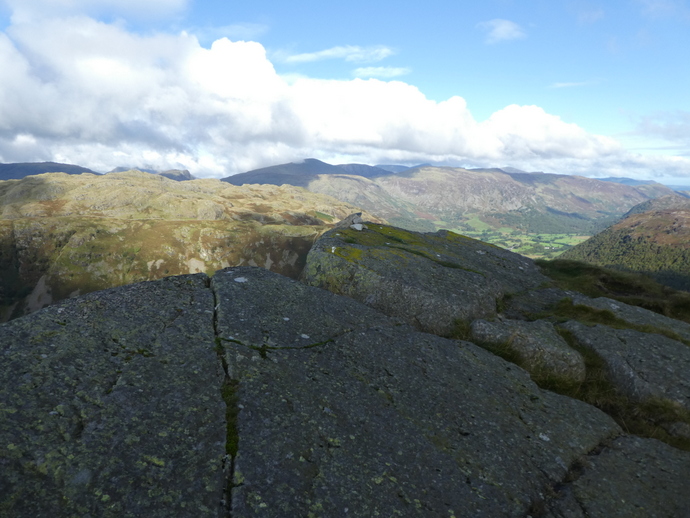 Moving on towards Sergeant's Crag you meet a wall that you mostly follow but it is a bit of a awkward drop to get down beside it. But ahead of you Sergeant's Crag (pic 11) imposes itself into your view and the view up Langstrath (pic 12) is good with Bow Fell & Esk Pike at the head of it & Glaramara & Thornythwaite forming the right hand side. 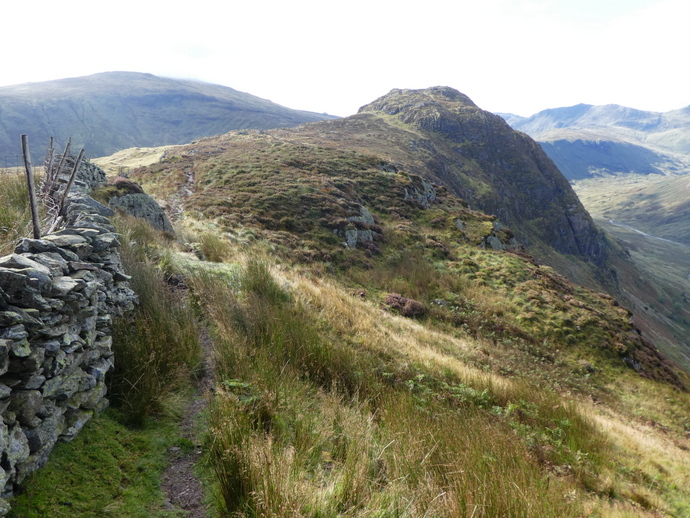 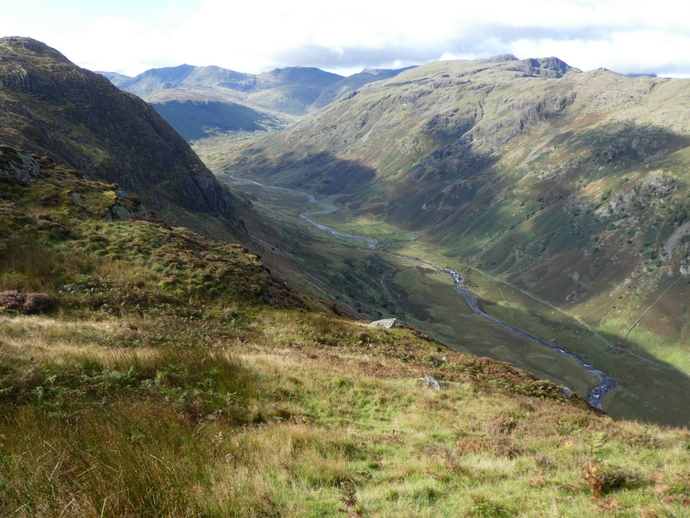 Having reached the summit of Sergeant's Crag the slightly greater elevation gives even more extensive views SW (pic 13) with Pike of Stickle just poking its top up on the left over the shoulder of High Raise my next top on this walk and Rosset Pike forming the left flank of Langstrath as it curves round & Crinkle Crags the distant centre and as the pics show the cloud had broken by now to give clarity to the distant fells, although it did come & go a bit and always seemed worse Helvellyn way. 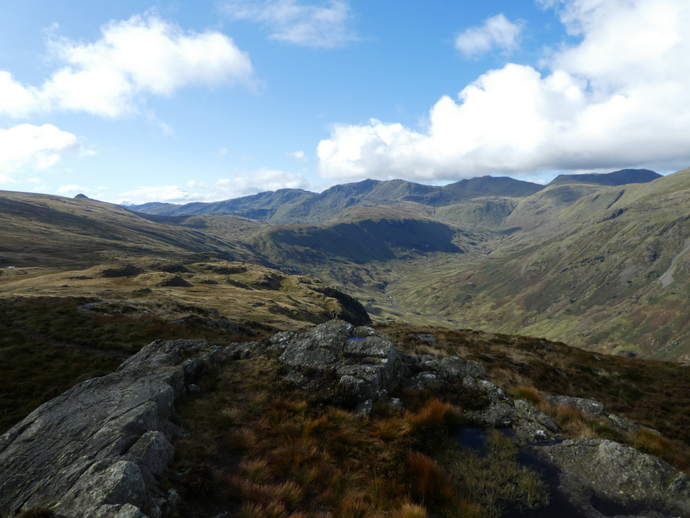 From Sergeant's Crag to High Raise was a pathless stretch of wet ground to pick one's way over with a bit of sheep track to sheep track walking until you get to the path from High Raise to Ullscarf which then seemed like a motorway in width to what I'd just been on. The summit trig pillar on High Raise (pic 14) being distinctive in being made of stone and not your usual white painted concrete. The fells in the background range from Bowfell just clipped of on the left, the Scafell's in the middle to the dome of Great Gable nearing the right edge. Not the summit cairn (pic 15), that has now become the wind shelter according to AW's revised book 3, but at the top the blue sky meets the sea of the Solway Firth, with a bit of Bassenthwaite Lake below it and Skiddaw rising up right of it some 12miles distant, the general direction of the pic is NNW if you want to name all the others. This one (pic 16) looking NE to Helvellyn with the dark cloud just down on it top. The next (pic 17) is generally NNW again but a bit more round anticlockwise with the cut in the fells on the left being Honister Pass & Grasmoor being the high one centre back. 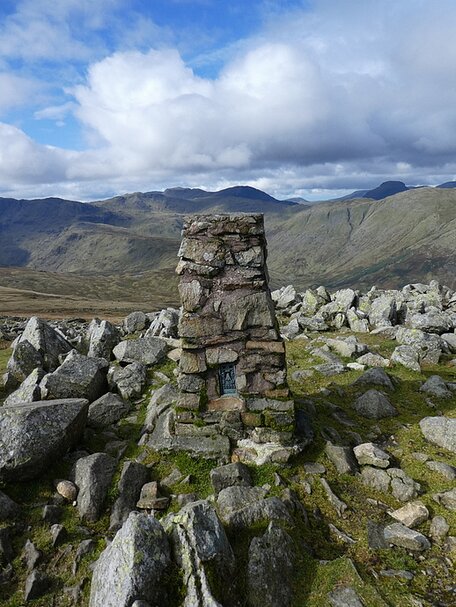 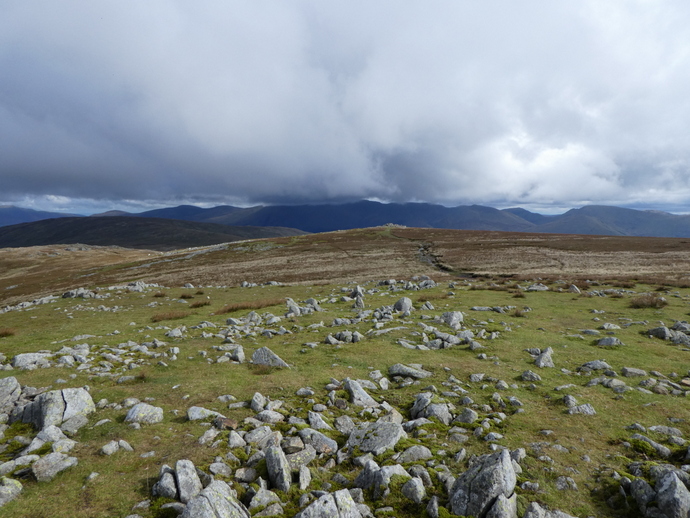 A 360+ degree round vid is available here - https://drive.google.com/open?id=0B5cBCG0aAhZmMUkxY2p3UkVCMTg

From High Raise it was back & on along Greenup Edge towards Ullscarf, after passing the low point with its X roads of paths the ground turned wet & peaty & the path a bit churned up so I was bending round some spots, on reaching the broad summit area of Ullscarf there are distant views of fells (pic 18) with the two domes being Scafell Pike & Great End left, Great Gable right, but they are not as good as High Raise and I'd suggest rather than do this sites Eagle Crag to Ullscarf walk (walk 166) go to High Raise instead. From Ullscarf on there is a bit of a path that leads to a corner in a new fence & parting of ways (pic 19) and from here High Saddle blocked the view of the worst part of the walk but the water bodies in the photo are Blea Tarn to the right, Watendlath Tarn over the hump of High Saddle & Bassenthwaite at the top. 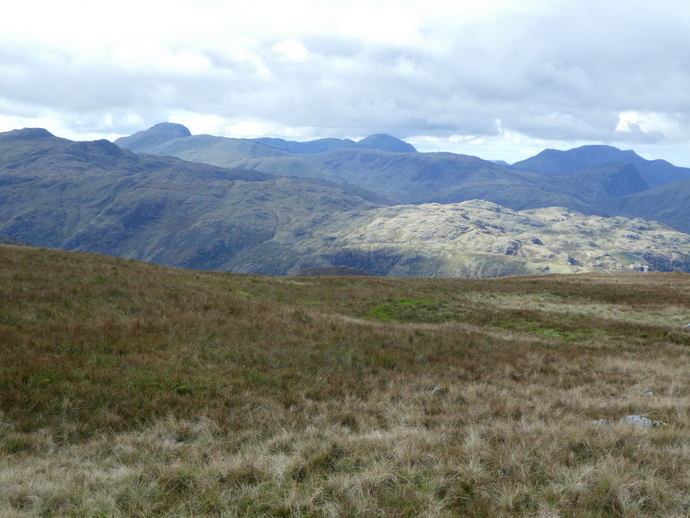 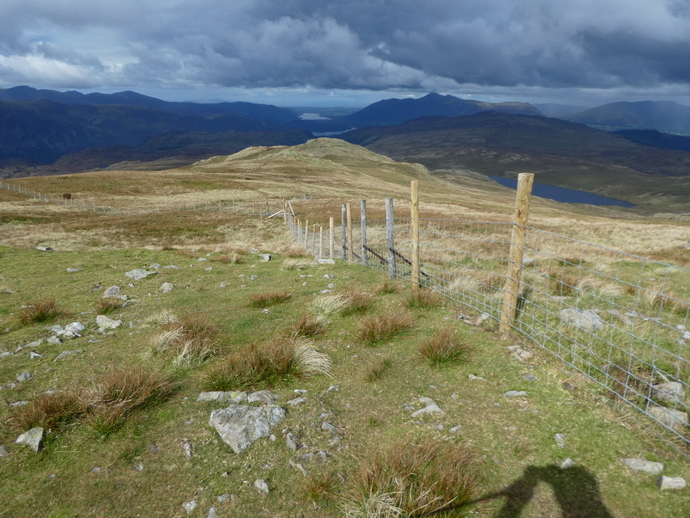 From High Saddle came this view (pic 20) of Honister Pass from Seatoller up & 4 of the peaks I'd done the previous day. And from Low Saddle (pic 21) same water bodies as pic 18 but Derwent Water now visible and the ground to negotiate on the left. This ground was pathless bog but the odd passage of quad bike had created a slightly easier route & one knows the bikes aren't going to go through the worst places but even then soon realised that the central flat bit was going to be impassable and I had to detour quite a way from the direct line, having walked boggy areas mainly in the Peak District many times you get to read the ground and know that sitting open water is generally a no go area whereas white grass is good plus a walking pole to test dubious ground is always a help. Anyway I managed to get to Dock Tarn with sodden boots but dry feet. These shoots of it are on the approach (Pic 22) & from its N end (pic 23) 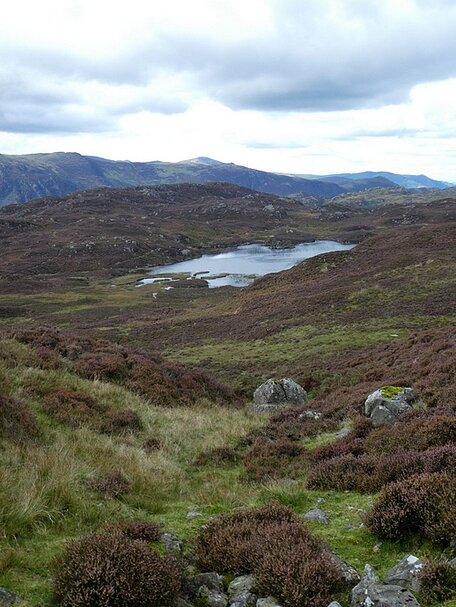 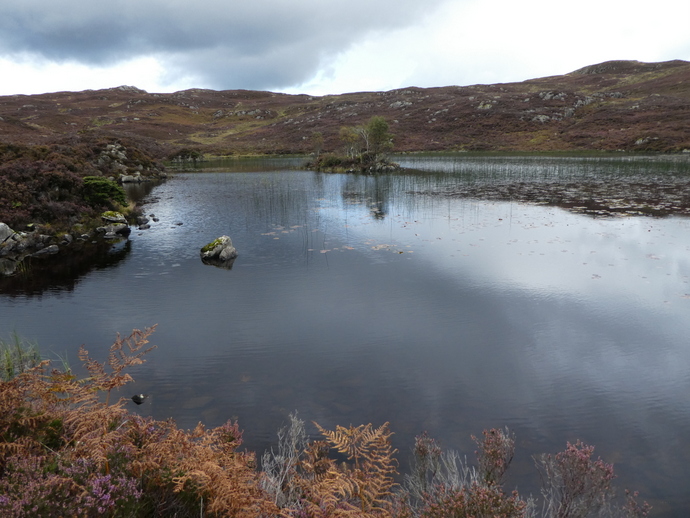 Having reached the tarn and with GPS unit showing perhaps a slightly late ETA if I did go on to Watendlath, I compromised and did go on to Great Crag as planned and got this shoot (pic 24) of Watendlath. 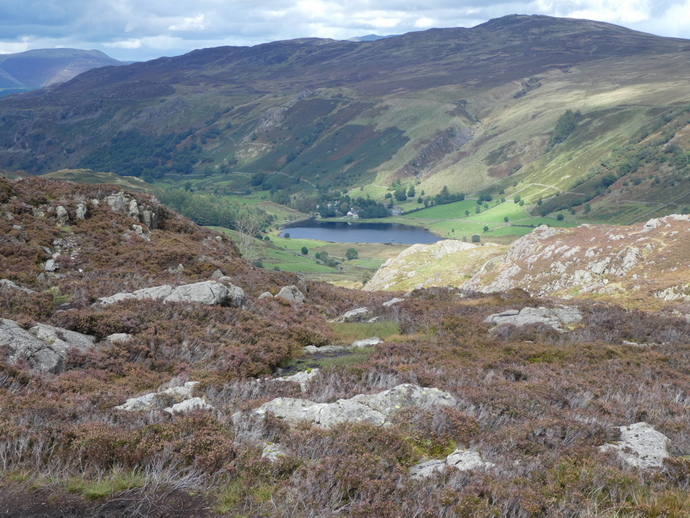 But from Great Crag I took a path that headed S as a potential intercept to the path down from Dock Tarn but it soon petered down to almost nothing and then from up above could see down to a glistening bog & having had enough wet ground for one day I picked a way back to the higher path above Dock tarn. It was then onto the good path down towards Stonethwaite, initially it was open and looking across (pic 25) I had an excellent view of the first stages on that days walk in Eagle & Sergeant's Crags and High Raise just poking up between them. 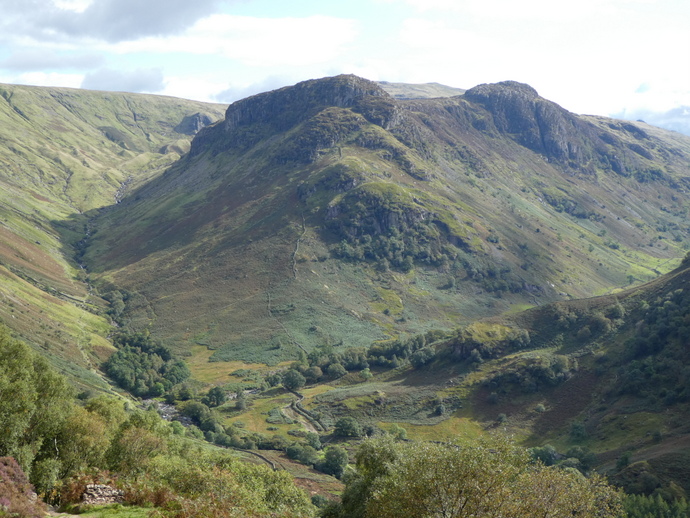 Further on down the path entered deciduous wood, open enough for a green floor and some sun to penetrate so it was pleasant & then finally (pic 26) at the bottom it opened out to the green pastures leading back to Stonethwaite with a small diversion for me to read a placard about the hamlet on a barn door, then back on the road to my campsite. 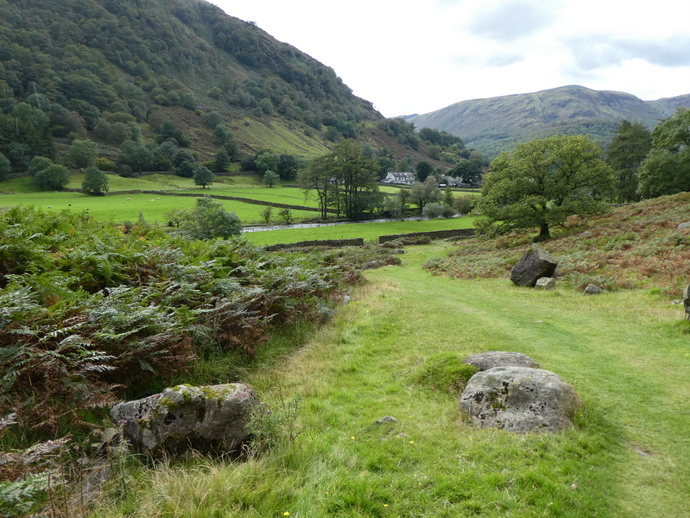