This was the 4th & final day of my Lakes holiday and as I was camping I was running my day with the light early to bed & early to rise, which meant that on the drive to where I parked even though the promise was for a fine Sunday I only passed 1 or 2 cars coming the other way which gave one a bit more time to admire the views rather than concentrate on other drivers on the single track road. Having plotted the route before hand I knew that it was slightly longer than the previous few days but still manageable.

At the start there was a mix of sun & cloud in the sky, with lower drifting cloud (pic 1) over where I'd walked the first day the Red Pike to Haystacks ridge, but I hoped as the sun rose more it would burn back. 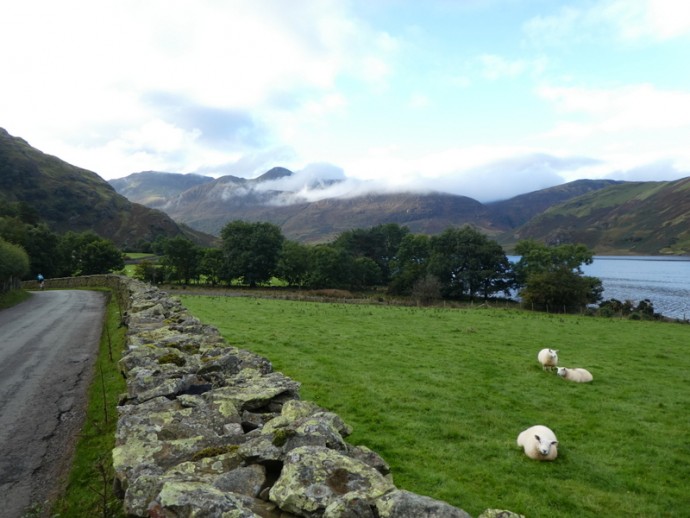 The first stretch on this walk was 1 ½ miles on or by the road looking over Crummock Water before turning up a wide grass track through the bracken near Lanthwaite Green Farm, looking back gave a nice view of Mellbreak (pic 2) and just before crossing the nice bridge over Liza Beck, Grasmoor End (pic 3). 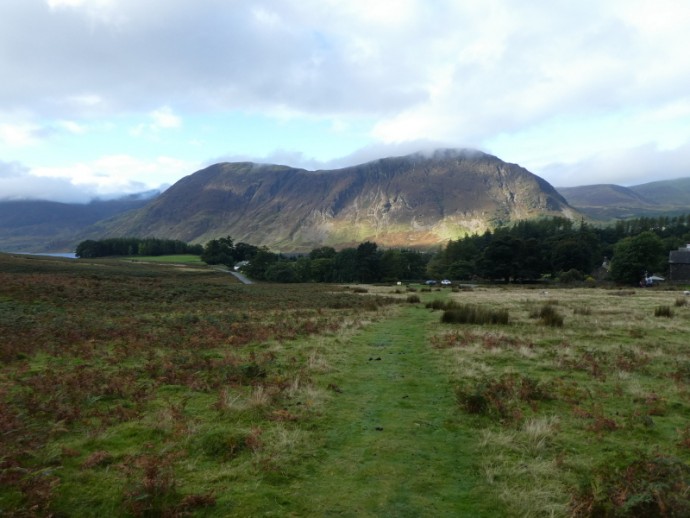 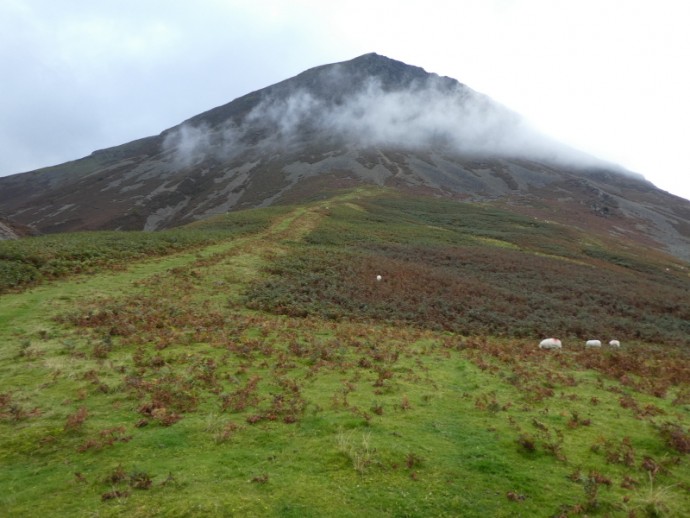 Rising up to the start of where the path bends round Gasgale Crags the weather wasn't doing what I'd hoped, instead the cloud was drifting lower than I was and was just below 500m elevation so it was limited intermittent views but this one (pic 4) shows the hummock of Whin Ben that I'd come over and a bit later (pic 5) over the N end of Crummock Water. 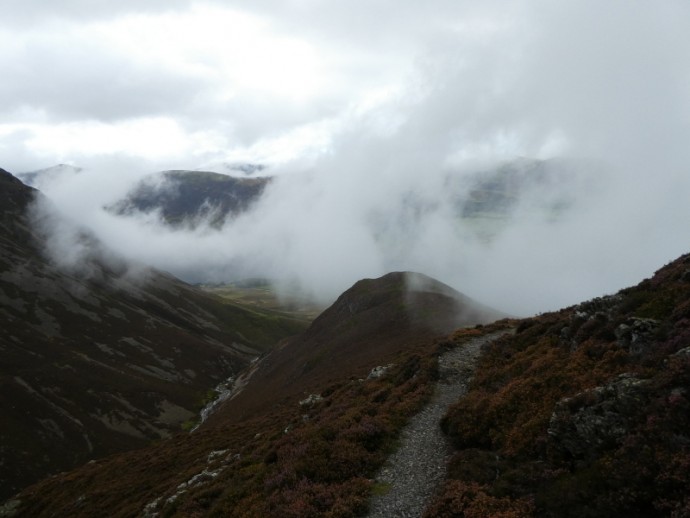 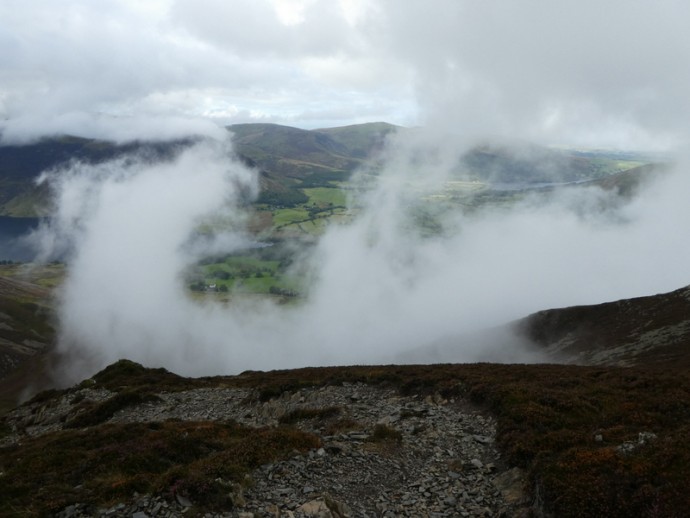 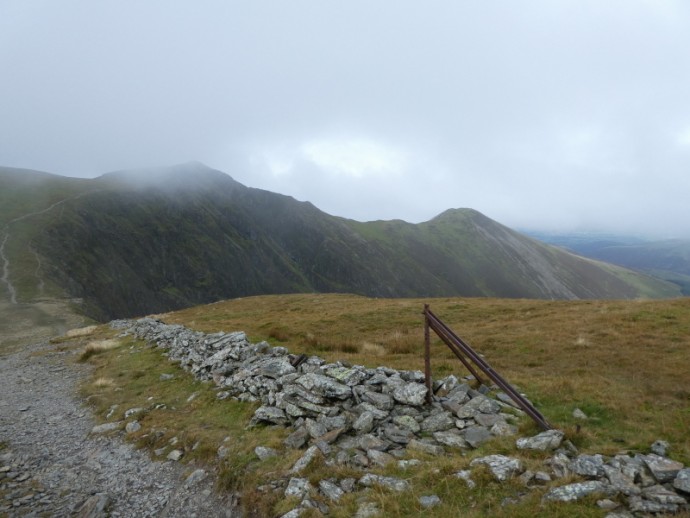 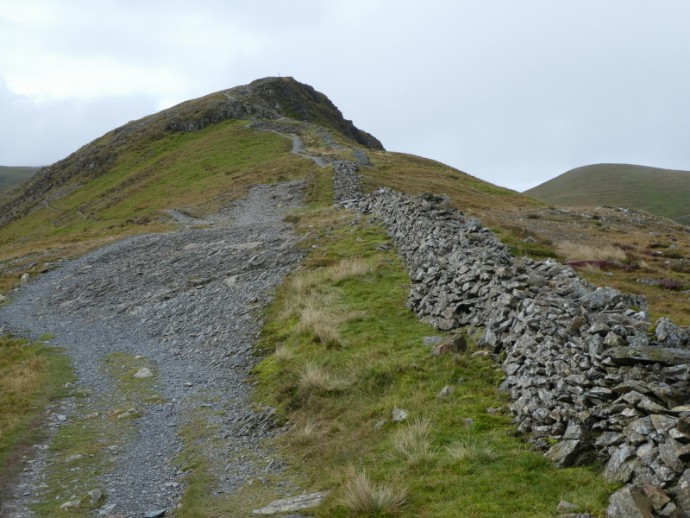 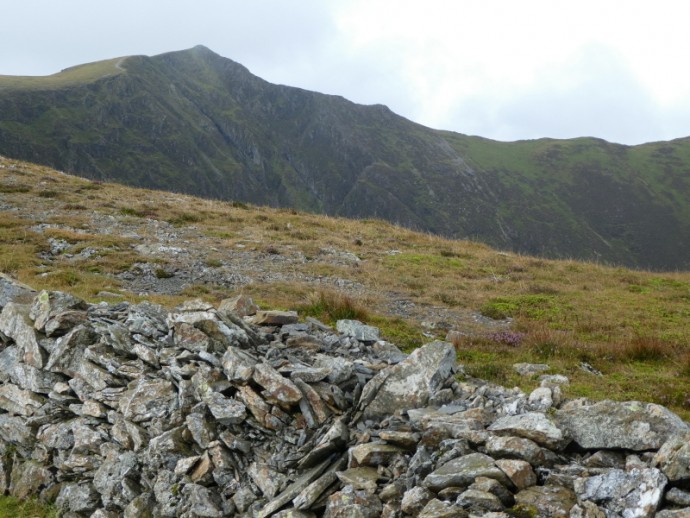 On reaching Grisedale Pike (3rd Wainwright) it was time for the first half of my lunch during witch I had fleeting glimpses of the distant scenery enough for my brain to roughly piece together a more whole picture but one of those times gave this (pic 9) across the N end of Derwent water with a decapitated Skiddaw filling most of the skyline and before I left the summit (pic 10)one of the balancing act of the summit cairn. 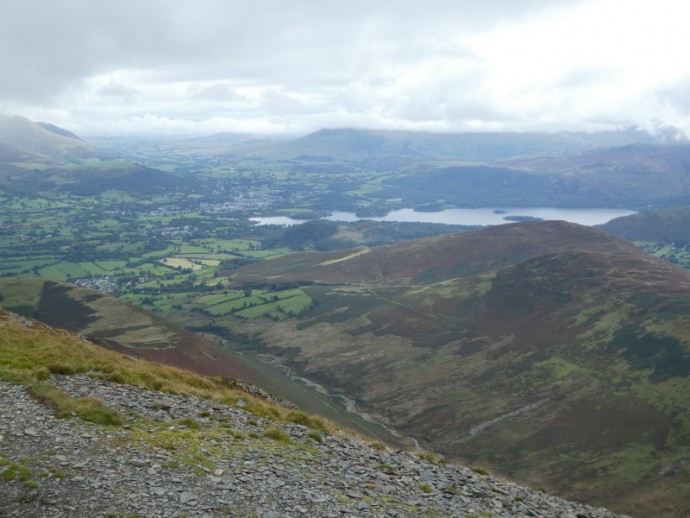 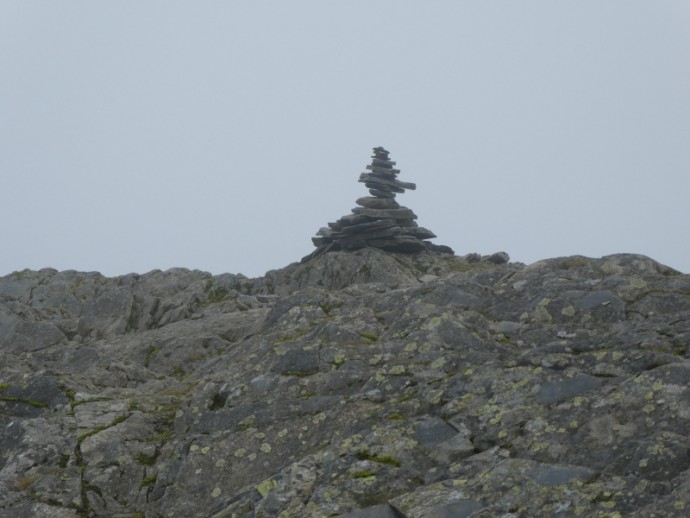 From there it was the direct route to Coledale Hause bypassing Sand Hill, but with the cloud down the views were poor, rounding the bottom of Eel Crag there is supposed to be a path that turns off to Grasmoor but it must be pretty insignificant as I missed it, so after a while cutting roughly NW over the grass initially bending round wetter bits & following sheep tracks but then just making a beeline towards the edge where I hit an easily visible path that lead round to the summit where there were the view consisted of the summit cairn & shelter, the ground and white cloud, so no pic, but it was Wainwright no. 4 of the day From the summit it was a case of following the path E towards Crag Hill as it is on maps and as I'll call it but Eel Crag as AW called it. However as I was moving on the wind was blowing the cloud more so a bit more distance was revealed giving this bit of view (pic 11) back towards the summit of Grasmoor and a bit later this (pic 12) of Whiteless Pike that I was due to go over later. And plus a bit more time and distance this (pic 13) of Grisedale Pike. 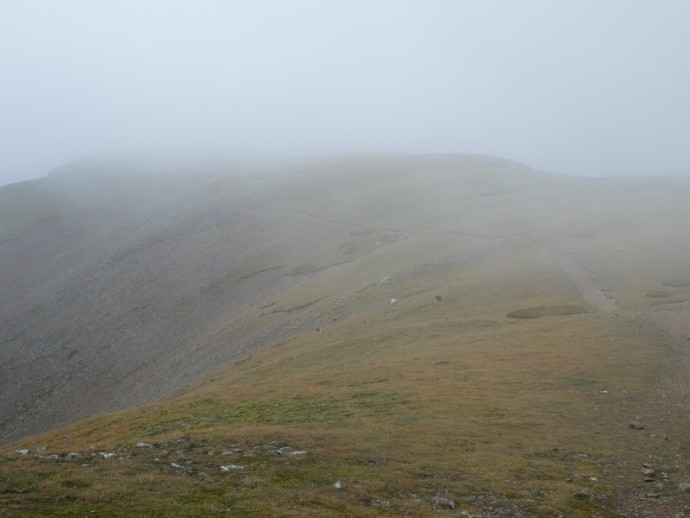 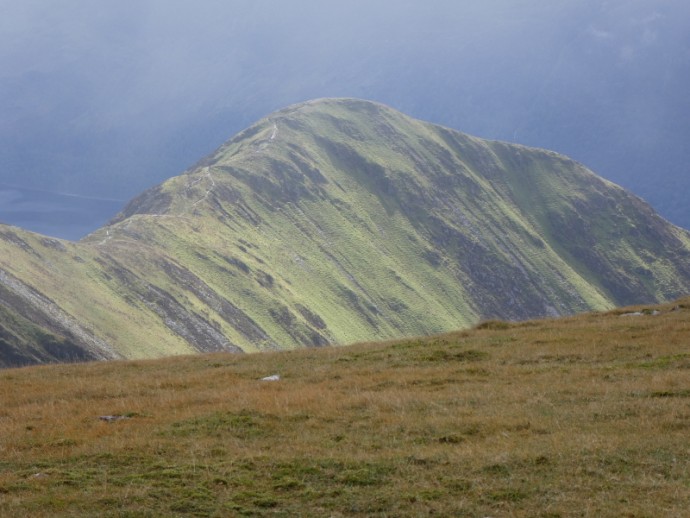 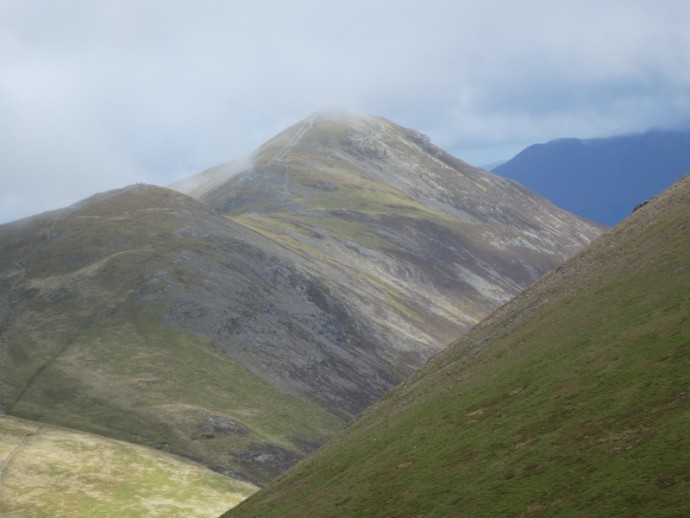 Then as I was crossing the low point before my assent of Crag Hill the cloud lifted / blew away, so as I said to some other people coming the other way they were in for better views than me on Grasmoor, plus if I'd been on a shorter walk I may have turned back but I didn't and continued on to the summit of Crag Hill (Wainwright no. 5), with views of the summit trig pillar & cairn with Skiddaw the high point behind (pic 14), down the length of Coledale Beck (pic 15), over Newlands Hause & Buttermere to the High Stile ridge (pic 16). 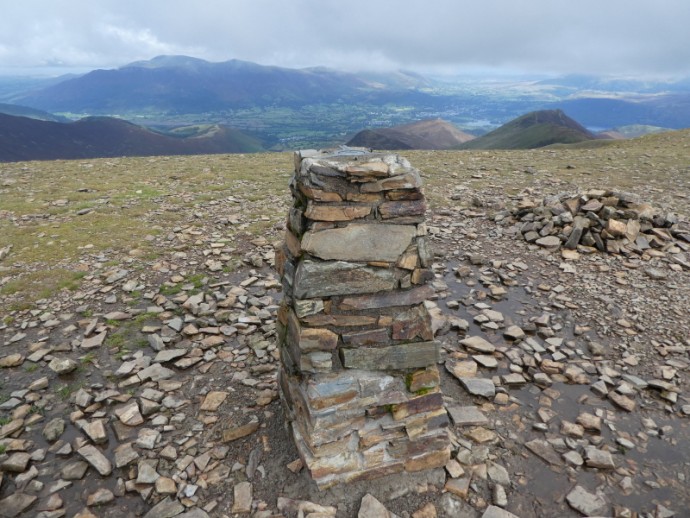 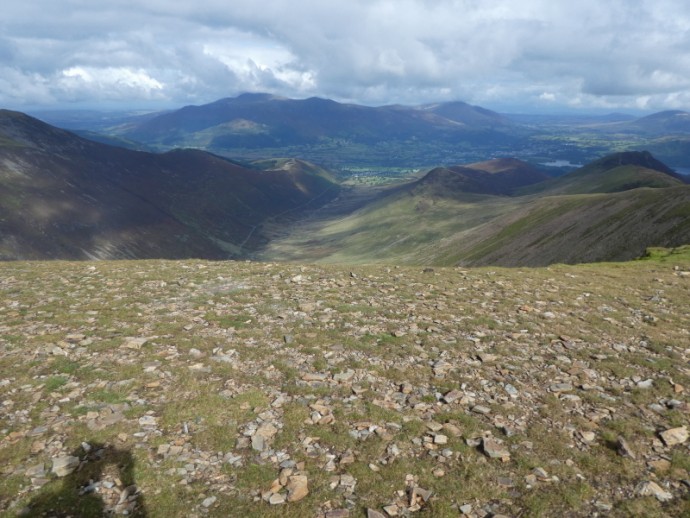 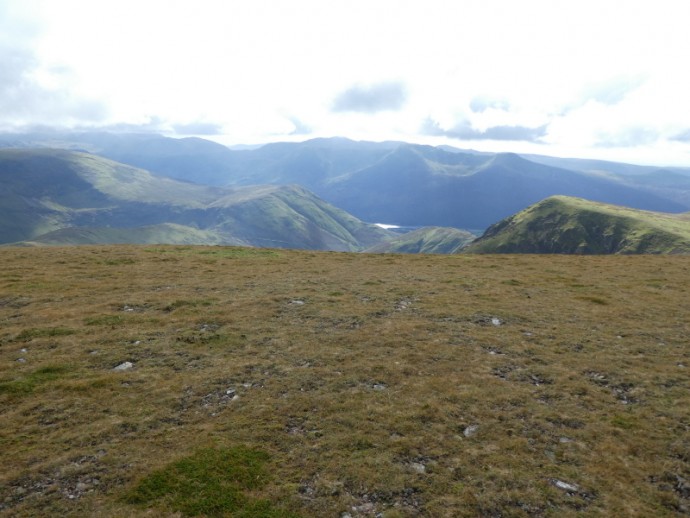 From Crag Hill it was down & round following near to the edge to Wandope (Wainwright no.6) in the scale of things the rise up to it's summit was hardly noticeable, although the step slope down to Sail Beck does allow good views out, (pic 17) with the ridges coming up from the left going front to back, Knott Rigg, Robinson, Hindscarth & Dale Head. 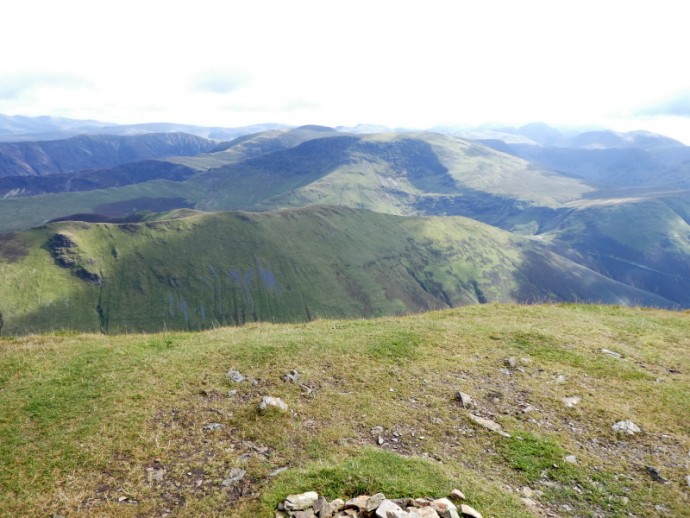 The next target was then Whiteless Pike (pic 18) accessed via Whiteless edge which has a good path along it, but before getting to it came (pic 19) the view semi down Rannerdale Beck over to Mellbreak standing proud over Crummock Water. 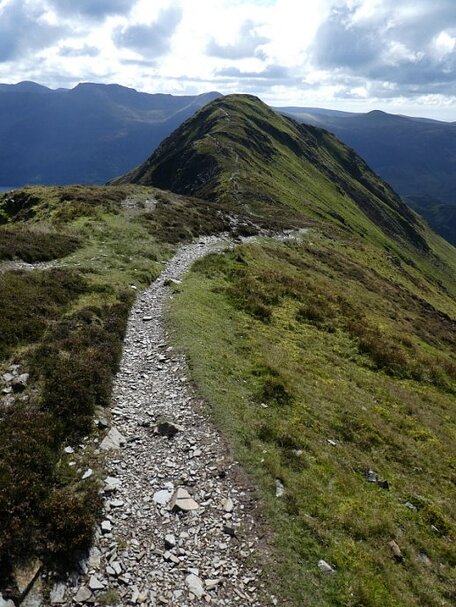 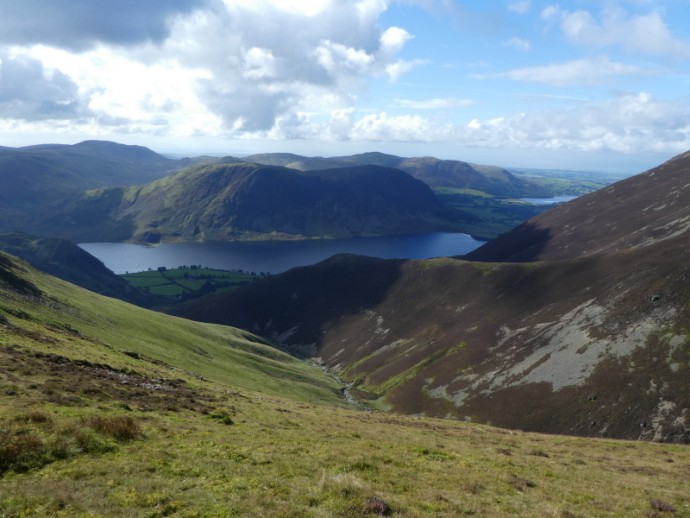 Having reached the summit of Whiteless Pike (Wainwright no. 7) these two panoramas of Grasmoor, Thirdgill Head Man that the path comes down & just separated to its right Wandope (pic 20) and Wandope round right to over the head of Derwent water to the fells behind (pic 21) there was also not pictured the view round to the High Stile ridge.

Having moved on from the summit came my first full view of Rannerdale Knotts (pic 22) that also shows the start of the uphill section on my day 1 walk where I curved left up Scale Beck that in the pic comes down over the top of the Knotts into the cleft in the fells but then up the ridge to Red Pike that is the higher fell behind Dodd over the fields at the top of Crummock Water. 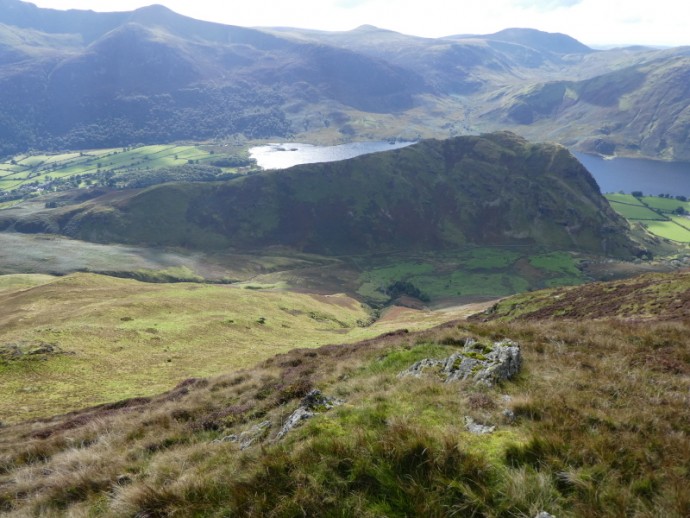 The descent from the summit is steep and was a bit hard on tired legs but it wasn't that long before I was onto an easier grass path with quite a few people around, but that was to be expected on a fine Sunday afternoon near Buttermere village. Coming to the confluence of various paths my route was along & up Rannerdale Knotts to complete Wainwright no.8 of the day and from the summit came fine views including (pic 23) over the bottom end of Crummock Water to Loweswater Fell and its companions & Loweswater itself. 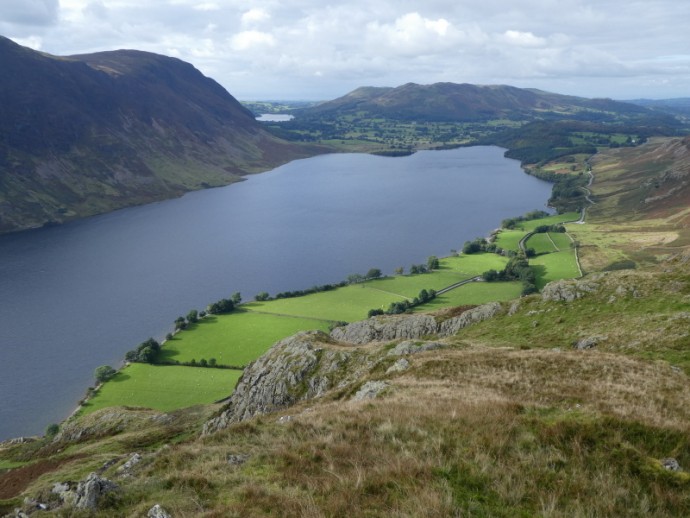 With a steep path down from Rannerdale Knotts and by now even more tired legs I took it slow & cautiously for me, with a minute deviation onto a lump to get the last elevated views including the fells of Haystacks & Fleetwith pike (pic 24) that were part of my day 1 walk around the head of Buttermere. 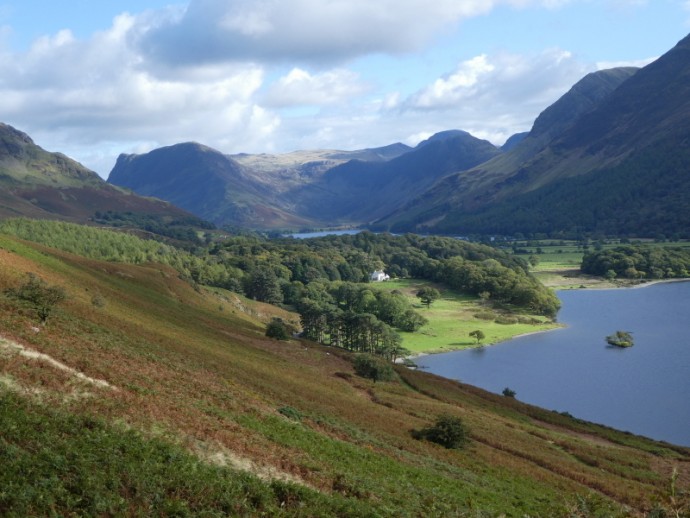 From there it was just a quarter mile back to my car with a drop down from the road to stand in Crummock water although only to about an inch or twos depth. And it was privately amusing listening to a couple of other people parked in the same place relying on there sat nav to tell them that they were by Crummock water.

Anyway another fine holiday for me, yes some of the views were missing the last day but 3 ½ good days out of 4 in a row is pretty good going especially with the poor weather the West has had this year. And if you are wondering what my totals were for my 4 day holiday they were 51.4 miles distance, 5292 meters assent & ditto descent and 25 Wainwrights summited.

PS all my pics are geotagged which is preserved when uploaded.