This walk goes along the South Eastern side of Wast water then curves round up over Whin Rigg & Illgill Head then back down to the start. Track & Profile below.

This was the 3rd day of my holiday and I had planned before hand to do almost an upside down & symbol out to Caw Fell from Greendale but with the rain still falling over an early breakfast & heavy at times and looking across to what I should have been able to see of Yewbarrow from my tent, plus having had a poor time walking in cloud the previous day, I decided to look at alternatives. But by time I was ready to set off the rain had stopped so I reverted back to my original plan got in my Car drove out the exit of the campsite saw the murk on Wast Water, decided to swap to my alternate plan & drove straight back in. My alternate plan had 2 options both went down over the screes but if the weather got worse I'd come back the other side on the road, if it improved go up to Illgill Head. One thing I knew was that the first half would be easy route finding with the lake to my right & a steep slope to the left it would be hard to get lost. After walking a bit further to get out the campsite after finding I'd gone to a set of locked gates by the NT public car park I was finally off in drizzly rain with blurry views, this of Illgill head. 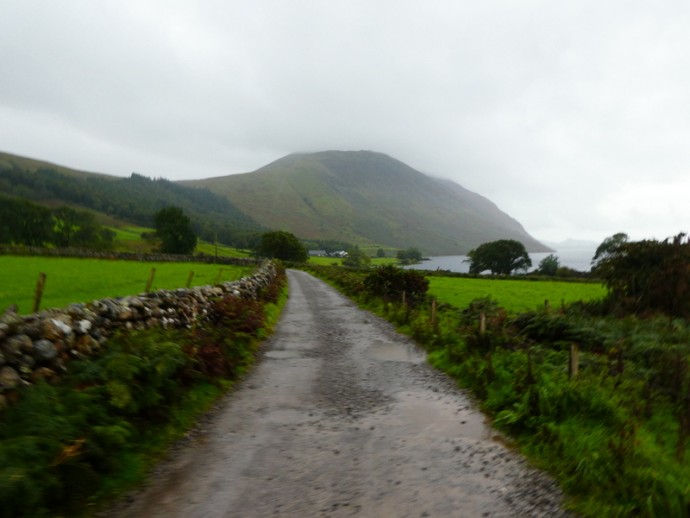 The way starts out on the farm drive before going through pasture land and then on to rough grazing land. Walking on the path through the fields at the start there were two rows of leaves left behind from what must have been a recent time when the lake level was a few feet higher. With things clearing more came a nice semi panoramic shot of Middle Fell & Yewbarrow, followed by looking NE to Wasadale Head with the cloud tumbling over Kirk Fell, Great Gable & just covering the top of Lingmell on the right. 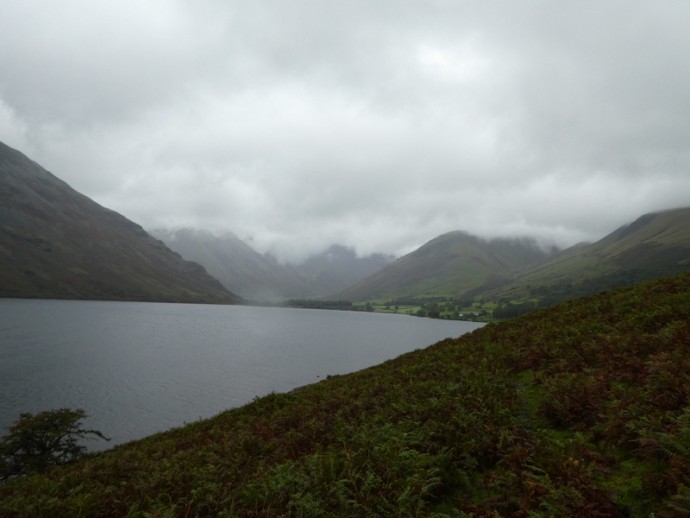 It was about an hour after starting off that I hit the first of the screes at first these weren't to bad in that they were light material and there was a path through but as things went on they became bigger in terms of rock size up to man size boulders at times that baring a bit of wear & the odd cairn to try and direct people it was a tortuous scramble and reviewing my track walker back home I was averaging the grand old speed of ½ mph over the rough stuff. Below the 1st pic is on my approach to one of the big stuff sections and to give you scale that boulder in the lower centre was about 10m long. The second is actually looking back as they came to an end. 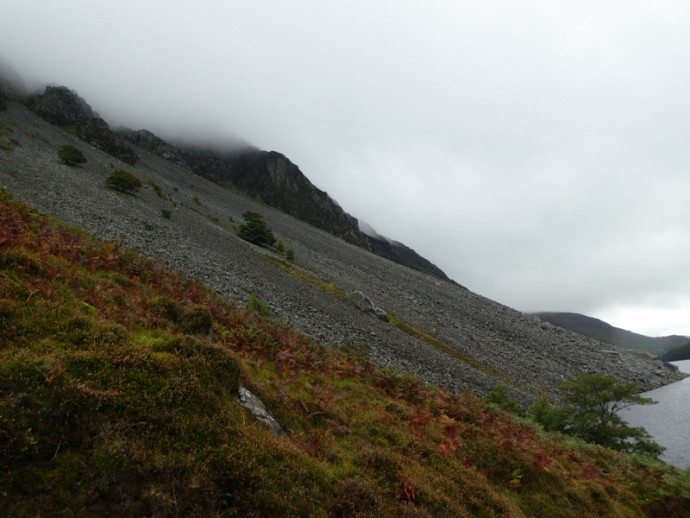 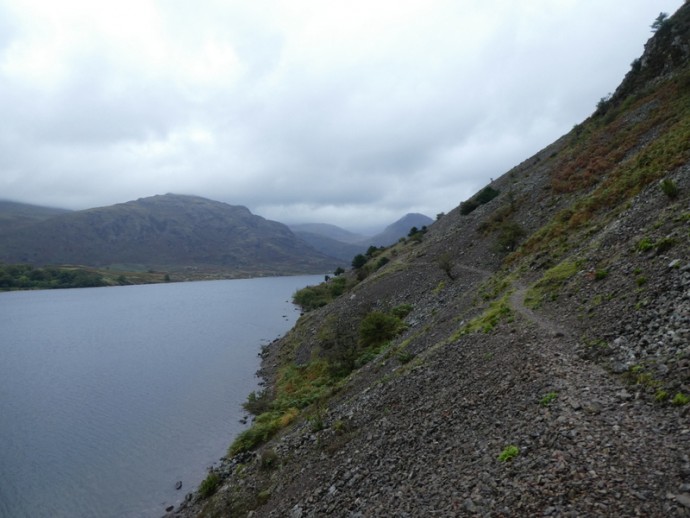 Coming to the end of the lake one comes across a water company building tucked away from more general views. With the little Knob of Latterbarrow poking up just right of the building on the skyline. 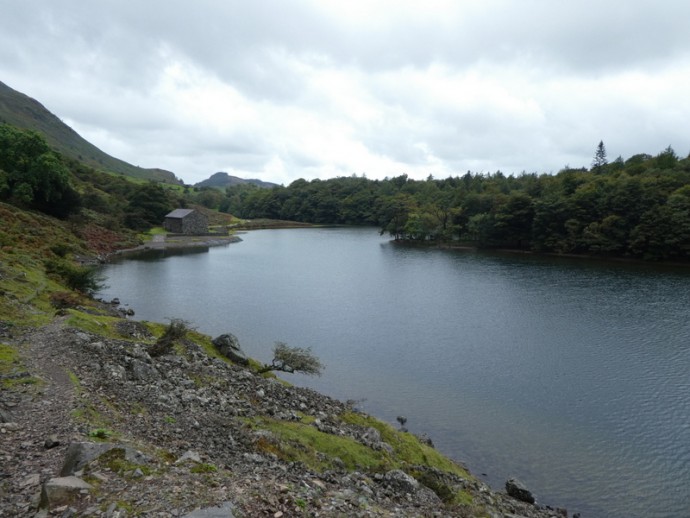 From here you are back onto drive-able tracks, so easy walking, initially by the lake but it becomes the outflow river & then bends away from you. It was on this track as I was approaching Easthwaite farm that I meet a couple with a dog who were planning to go up to Illgill Head, the same as me I'd decided by now as the weather had improved, but they were going the opposite way to as they were going up the path marked alongside Greathall Gill, although I'd been looking at my map as I'd passed by and noticed that it was a little trodden path through the bracken. Read on to hear more about them later. The path takes you right through the farm yard giving me the chance to have a bit of a bus-man's holiday looking at things as I passed by, from the buildings on the yard it was a turn up to the farms machinery area where one had to then pick the right route out, then on through & by pasture land before entering some woods were the going was wet under foot & continued to be so even when I started up the slopes of Irton Fell, about ¾ of the way up the slope came this shot of Latterbarrow. 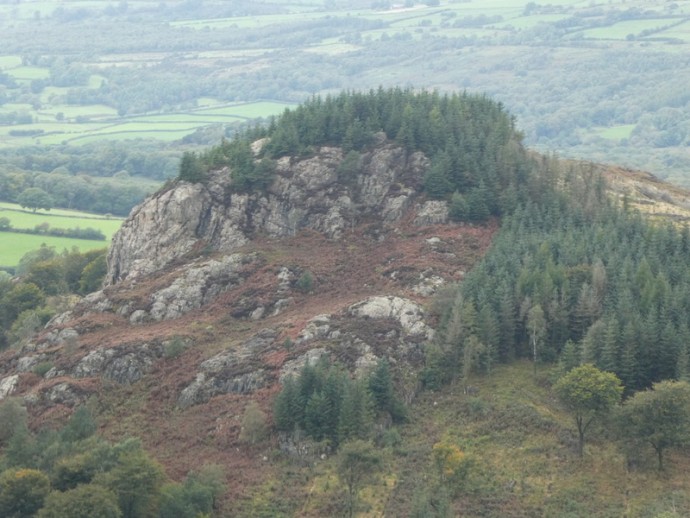 I then continued up the slope until hitting a wall that runs up the end ridge where one turns left to follow the gradient uphill in a straightish line to its little summit, this bit of the path was a bit rocky but that helped counter the wetness. From the summit one continues straight past the slash into the hillside that is the top of Greathall Gill before slowly bending slightly left following an obvious path that goes on up to Whin Rigg, as seen in pic below. 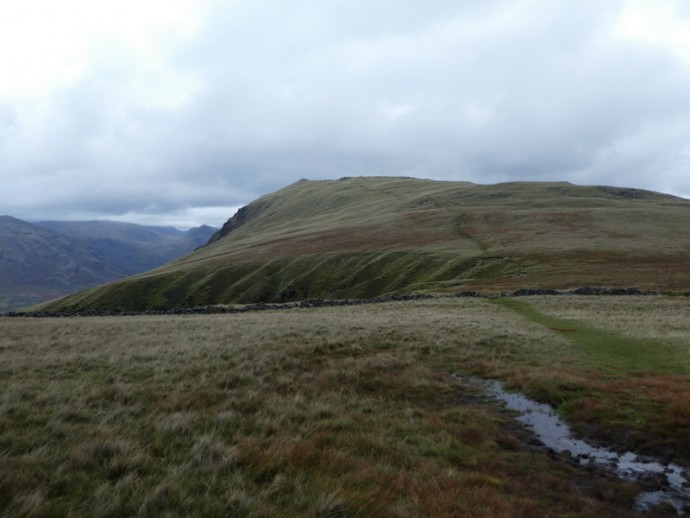 As one rises up the path becomes a wide green track through the grass & dries out under foot to give easy going where you can walk along looking at the view & not your footing. The path on from Whin Rig to Illgill Head continues in much the same vain but there is an option to take a smaller path that more closely follows the edge above Wast Water, which is where this view from above Broad Crag came, with Middle Fell centre dropping into Wast Water with Seatallan & Haycock behind & the pointed from this angle shape of Yewbarrow up at the head of Wast Water with its point filling the gap behind of Black Sail Pass between Pillar & Kirk Fell, where I was going the next day.

I continued to follow the edge path but noted at one point that people had diverted the path a few yards further SE because of cracks & slippage of the ground, just think that you are walking above all that scree material and that with each fall the mountain side is being eaten back. It was about halfway between Whin Rigg & Illgill Head that coincidental is the same length as the screes below that I got this shot showing a bit of the scared face below me with much the same mountains as before but with Red Pike now showing semi behind Yewbarrow with the ridge of Dore Head connecting it to Yewbarrow's far end, more of my next days route. 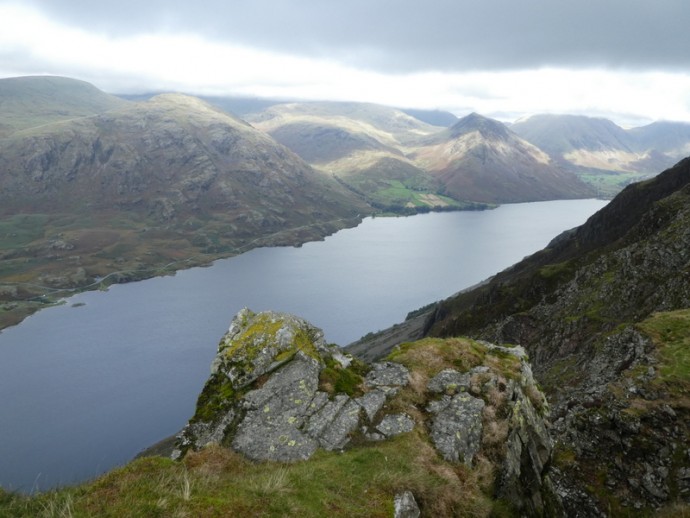 With the cloud virtually clear of the tops I was regretting a bit not sticking to my pre planed route. Moving on towards the summit of Illgill head was when I meat up with the couple I'd mentioned earlier who had found the route they come up Greathall Gill hard going, when we reached this prominent cairn on top. 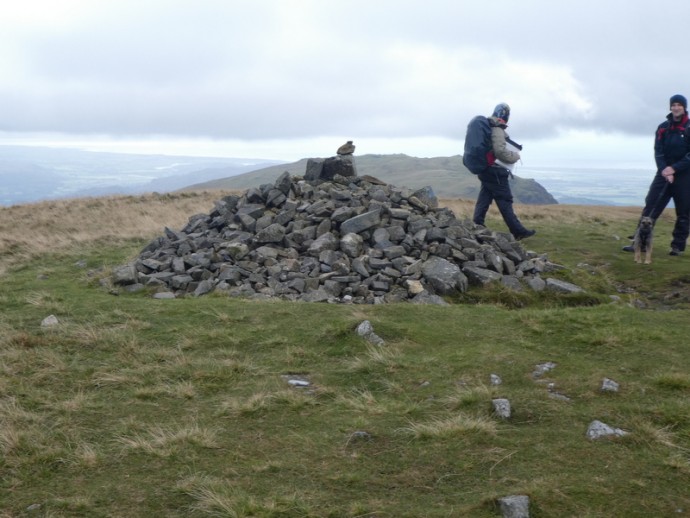 I think this is what Wainwright calls the summit or true summit, which is where the couple stopped, but this cairn is actually the secondary summit a bit away & a few meters lower than the slightly higher summit, although Wainwright does refer to it in his notes & OS & Waymaps mark this other point as the summit, although just to confuse things further there is a wind shelter up on another high point at the Northern tip of the summit plateau, which is where this pic of Mosedale was taken. 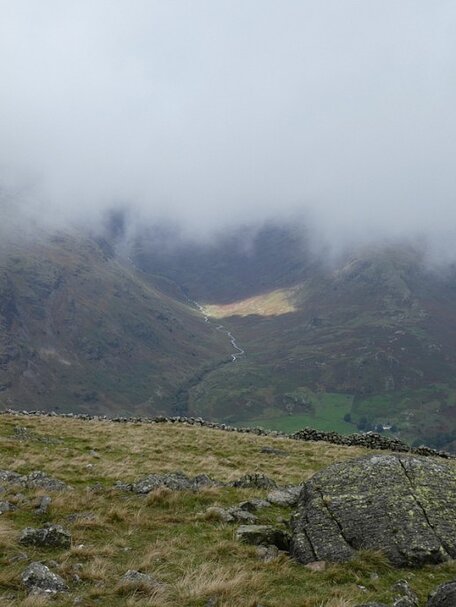 I then used GPS unit to direct me to the true summit which as you'll see below is rather insignificant due to the generally rounded top, but its cairn is built up on a natural stone protuberance. 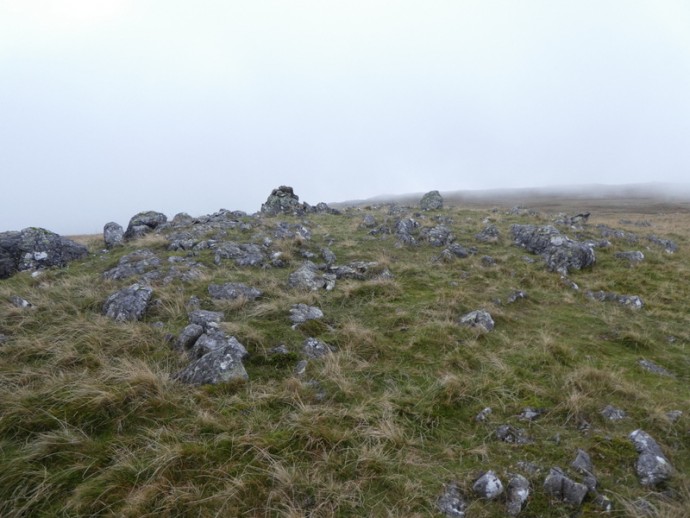 The path onward goes down the NE end ridge initially where I got this pic of the green fields at the head of Wasdale with left to right the fells being half of Yewbarrow, Pillar behind, Kirk Fell, Lingmell & the Western slopes of Sca Fell all of which by the end of my holiday I'd have walked on. 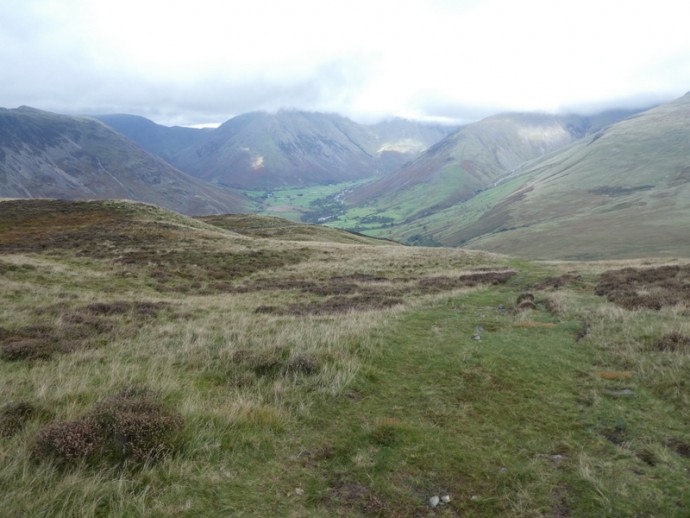 The path then reaches the head of Straighthead Gill which is about where this pic looking back SE over the shoulder to Harter Fell my stop on the way home. 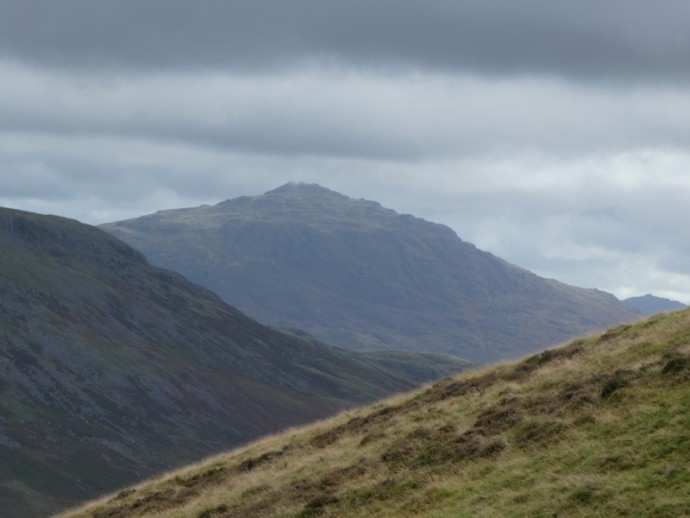 You follow the path roughly down the side of the gill for about ½ mile before fording it as it bends down to Wast Water whilst you go straight before joining onto the Old Corpse Road alongside a batch of planted woodland, the original purpose of the track was as the name suggests for carrying the bodies of the dead to churchyards for burial. It was as the road crossed Hollow Gill that there was this nice little bridge. 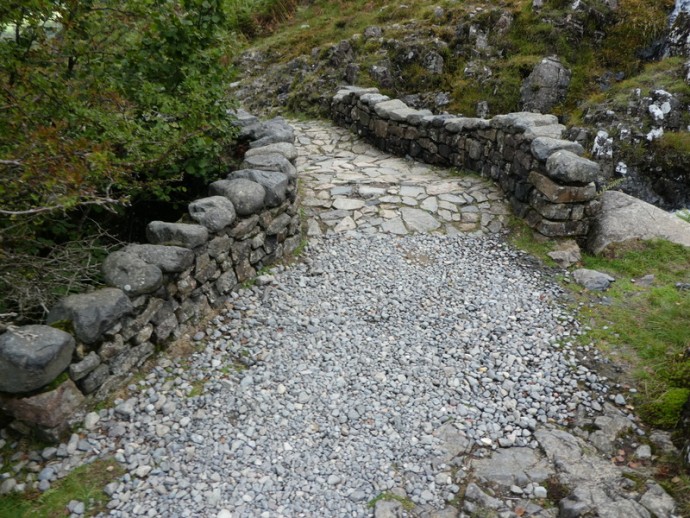 It was then just a case of following the road back to the NT car park, but before getting there came these shots, the 1st the length of Yewbarrow, 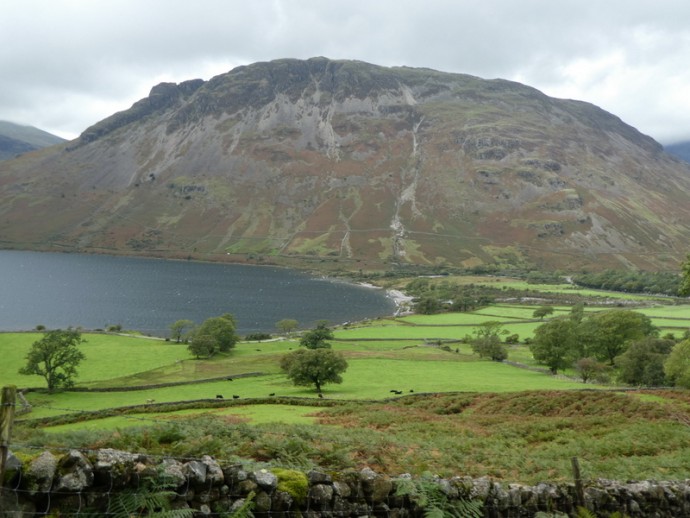 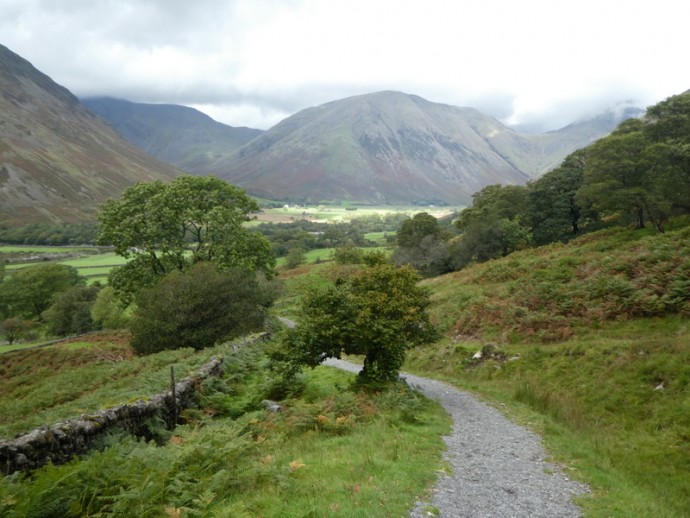 3rd back down the length of Wast Water. 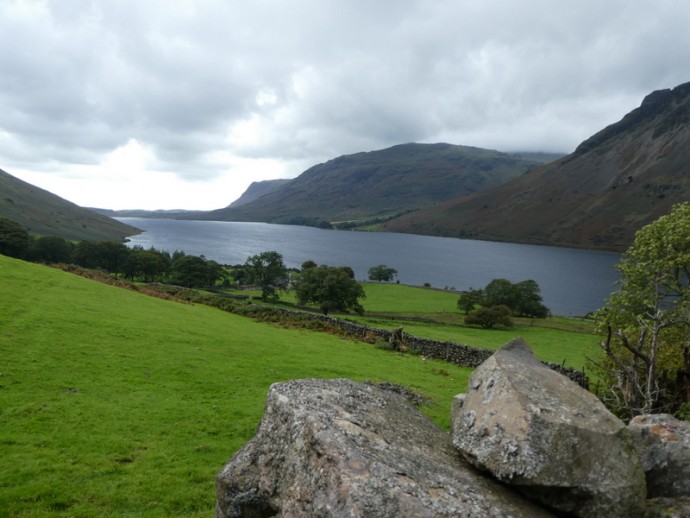 and finaly Illgill head where I'd just come down from. 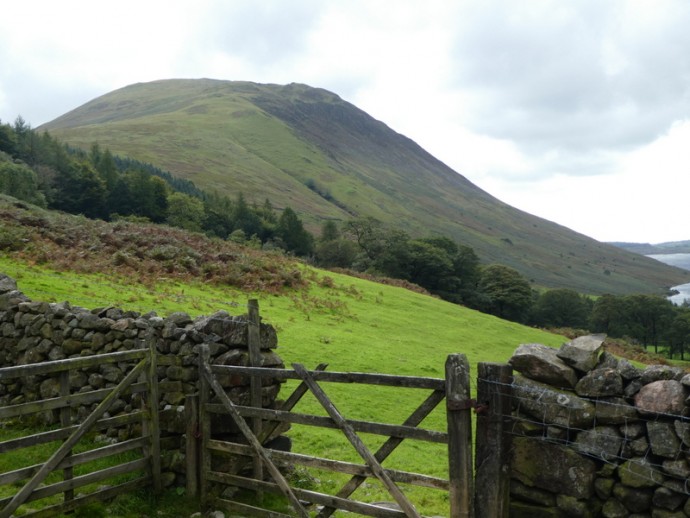 Another good walk for me, but like many others I'd say that crossing the Wasdale Screes is quite a task & just because the route is level doesn't mean it's easy. But if you do it I think it's the equivalent of topping out many a mountain.

Kanianne likes this post
permalink
WalkLakes recognises that hill walking, or walking in the mountains, is an activity with a danger of personal injury or death.
Participants in these activities should be aware of and accept these risks and be responsible for their own actions.