A visit to Cathedral Cavern from Tilberthwaite

Did this walk on Sunday 7th July. It would appear the tunnel segment has been blocked.

And it was definitely this tunnel, with the signboard on the right as you approach? 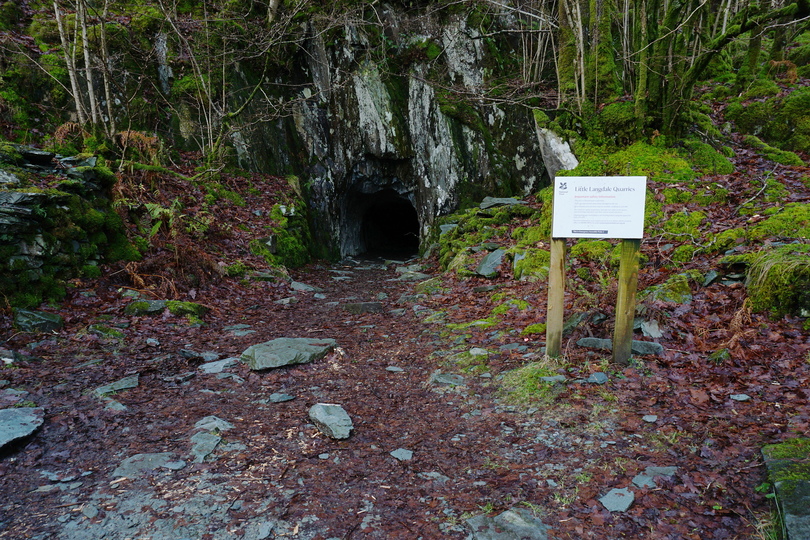 I ask as we have had a previous report of the tunnel being blocked and it wasn't (it was another tunnel, there are several, and the others are blocked).

Having said that beth re-surveyed the walk and revised the instructions after the last report to try help people find the right tunnel so I'd hope you did manage to find the right entrance and it's possible that things have changed. Do you by any chance had any photos of the blockage? Or, even better, do you have a GPS track of where you went?

Hi, came back from the Lakes on Sunday and we did a walk from Elterwater via Cathedral Cavern on the 4th. We did come across a local guide who showed us the exact entrance. This is my GPX - Where the route goes through Atkinsons Coppice is where we were shown the entrance. This is the tunnel as I found it. Not quite the same as the other picture I assumed the notice had been taken down. All the rest of the directions were followed. I found the Stile, read the notice, climbed the spoil heap by the clear path and found what I assumed to be the tunnel entrance.
permalink
By TallPaul on 10/07/19 at 12:55pm

OK, well that's not the same tunnel, as you can see by comparing the two photos. It looks from your track that you did find your way into the cavern by another route, so at least you saw that.

Certainly found the Cavern! Spectacular it is too. Lots of goldfish. The rest of the walk description worked for me. Curious as to where I went wrong with the tunnel bit.

Just had another look at the instruction. I suspect I may have climbed too high after the stile. Might try again this weekend.