Wet Side Edge to Dow Crag - (and a Brocken Spectre).

The mountain weather forecast had said that Saturday 14th September would bring sunny periods from dawn, with winds increasing steadily throughout the day, and with a 99% certainty of cloud free fell tops. – How wrong they were!!! – Apart from a short period soon after dawn, the tops, (certainly in the area of my walk), were soon enveloped in thick mist and murk, which persisted throughout most of the walk, only clearing during the final descent back to the car. The wind on the tops was extremely strong and gusting, at times making progress quite difficult.

I started the walk from the Three Shire Stone area of the Wrynose Pass. (Note that the Three Shire Stone, which was damaged by a car not long after its full restoration a few years back, is yet to be reinstated).
My initial ascent was up Wet Side Edge and over Hell Gill Pike to Little Carrs. And from there, contouring across the fell to pick up the track to Grey Friar. (The one fell-top included on this walk that I hadn't previously visited).
From Grey Friar, I backtracked to the col, then contouring around to Levers Hawse, before continuing along the main ridge path to the Old Man of Coniston. Then, it was down to Goat's Hawse before a there and back ascent to Dow Crag summit. Once back at Goat's Hawse, I took the diagonally ascending path directly back to Levers Hawse before continuing onwards and upwards to Swirl How summit.
From there, I walked around to Great Carrs summit, paying my respects at the Halifax bomber memorial on the way, before continuing down the ridge back to Little Carrs, and a reversal of the morning's initial ascent – over Hell Gill Pike, down Wet Side Edge and back to the car.

Some of the photos posted below are greatly compromised by the heavy mist restricting vision to nearby prominent objects. They are included in hopes of conveying some sense of the prevailing conditions at various points on the route.
However, whilst the weather was not what I had hoped for, it did conspire to show me something that I've wanted to see for all the years that I've been fell-walking – a Brocken Spectre! – And that in itself made this walk something that will long be remembered.

GPX Track of the walk: -

First shot of the day, and the weather still looking promising. – Looking across to Pike O'Blisco from lower slopes of Wet Side Edge: - 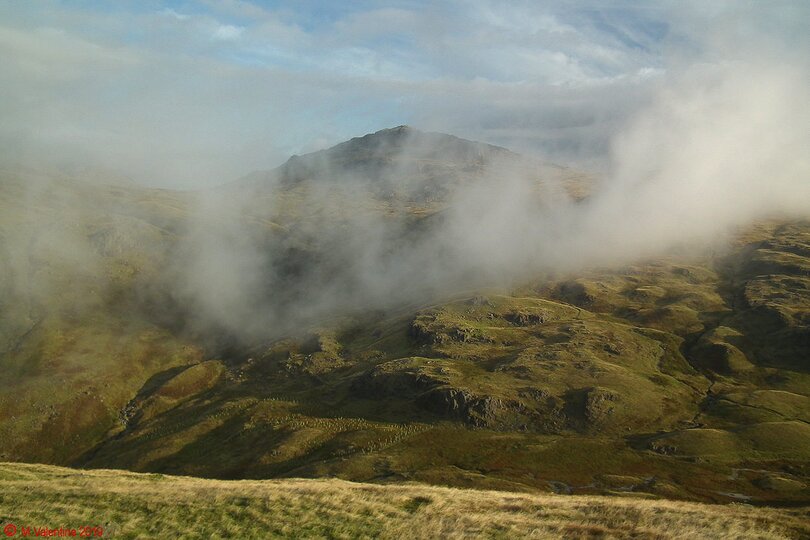 Further up Wet Side Edge, and a distant Brocken Spectre begins to appear. - Only to disappear just as quickly! 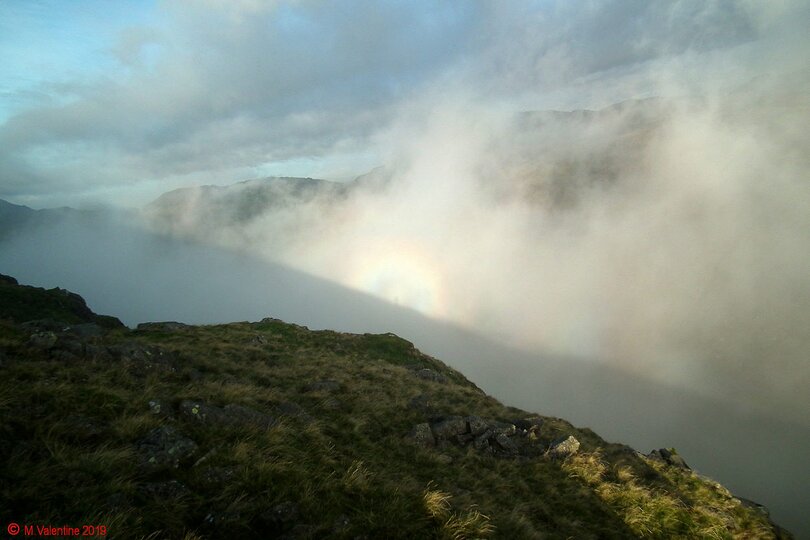 Ever so slightly higher up the slope, just a few seconds later, and a much better Brocken Spectre appears: - 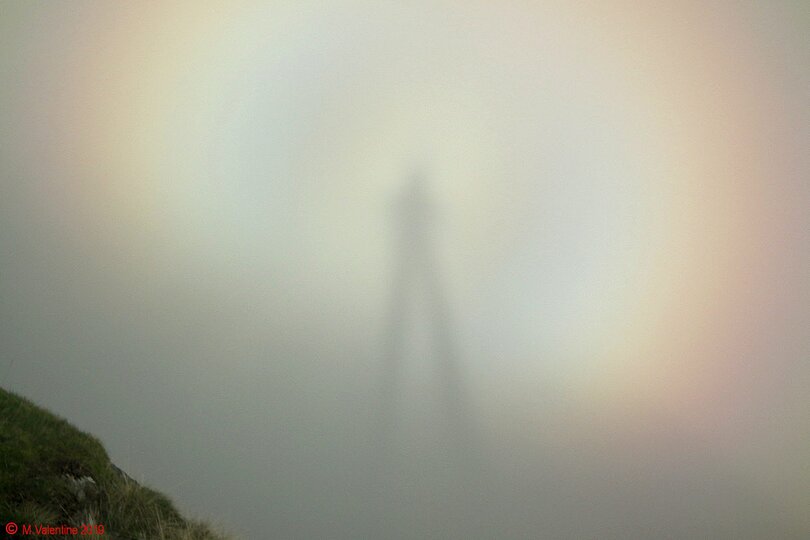 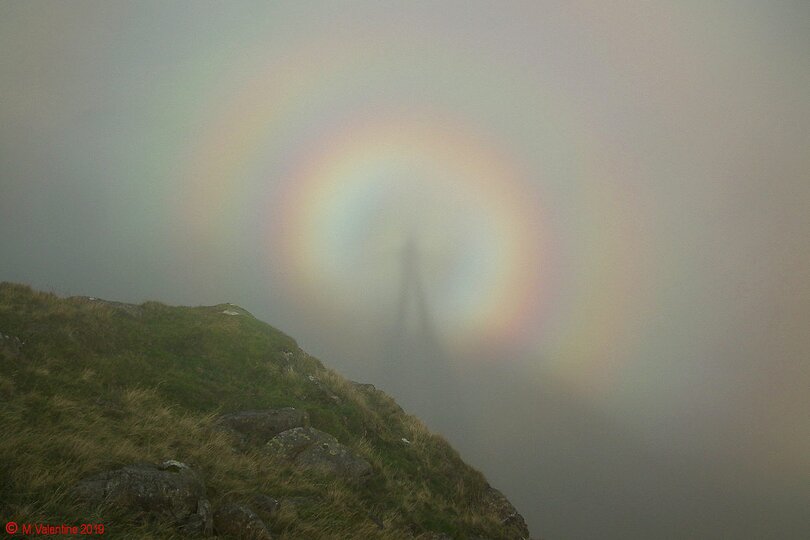 The spectre looked quite gigantic when compared to the small white car in the valley below. (At bottom right of shot): - 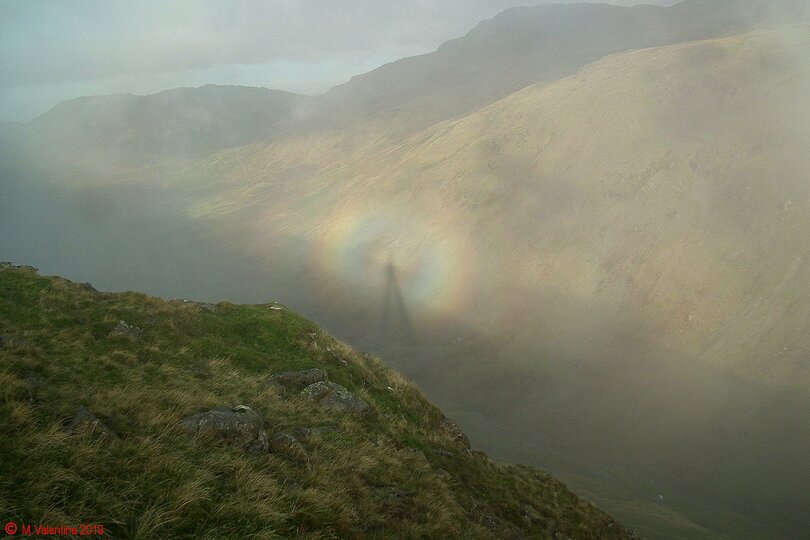 But the bank of mist was fast disappearing, taking the final glimpses of the spectre with it: - 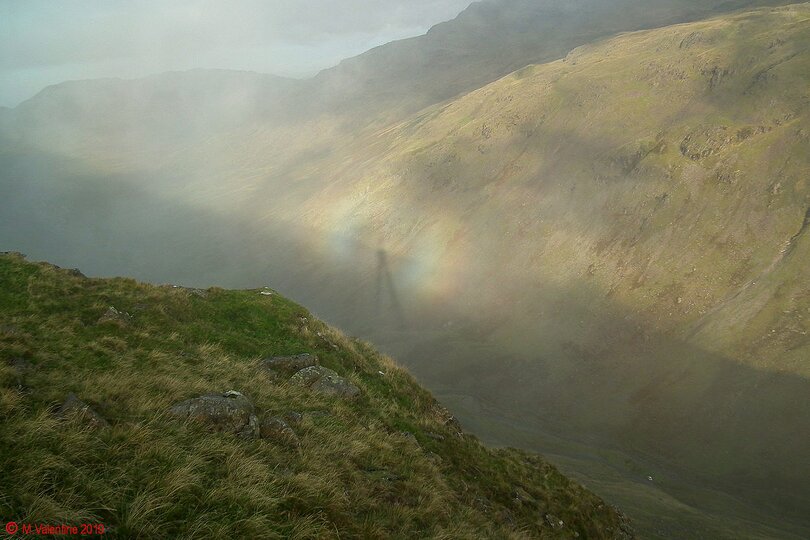 Soon after seeing the Brocken Spectre, the murk closed in markedly, and I didn't take any more shots until I had almost reached the top of Grey Friar. – The "Matterhorn Rock" on Grey Friar summit plateau: - 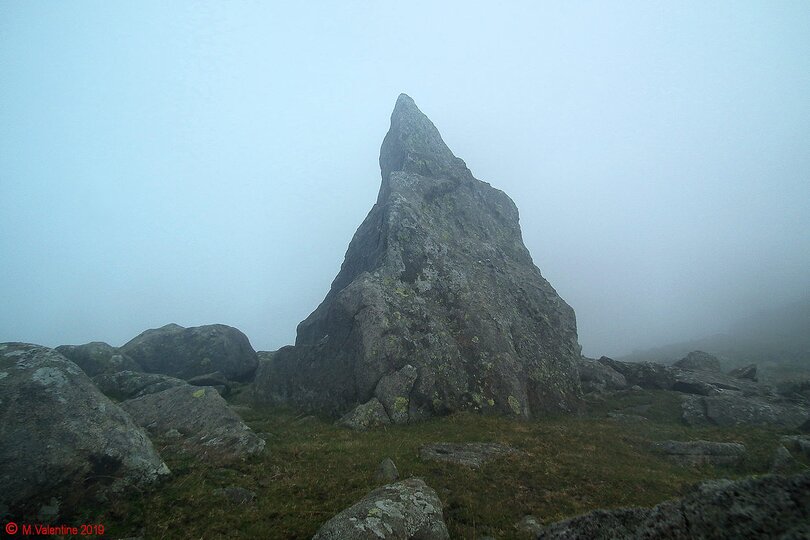 A few yards further on, and the mist shrouded summit cairn on Grey Friar is revealed: - 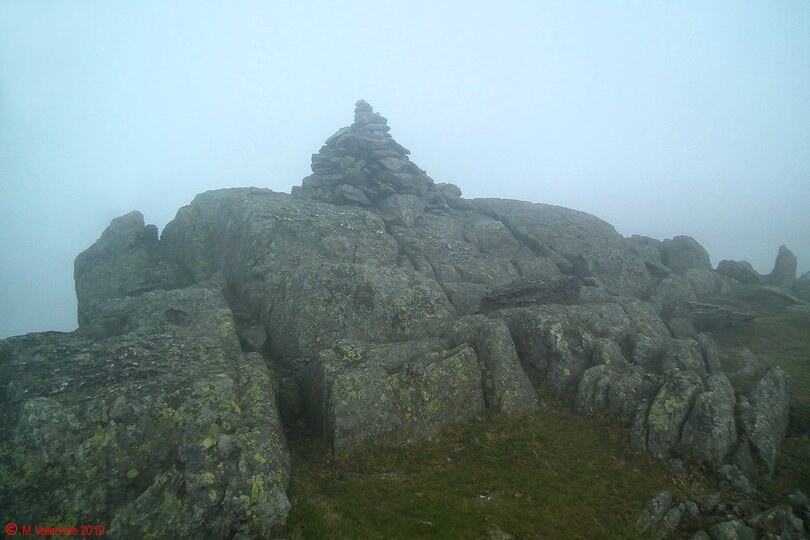 Retracing my steps back past the Matterhorn Rock, a few Herdwick sheep come into view through the mist: - I then contoured across to Levers Water Hawse, and a brief clearing gave this view down towards Levers Water tarn: - 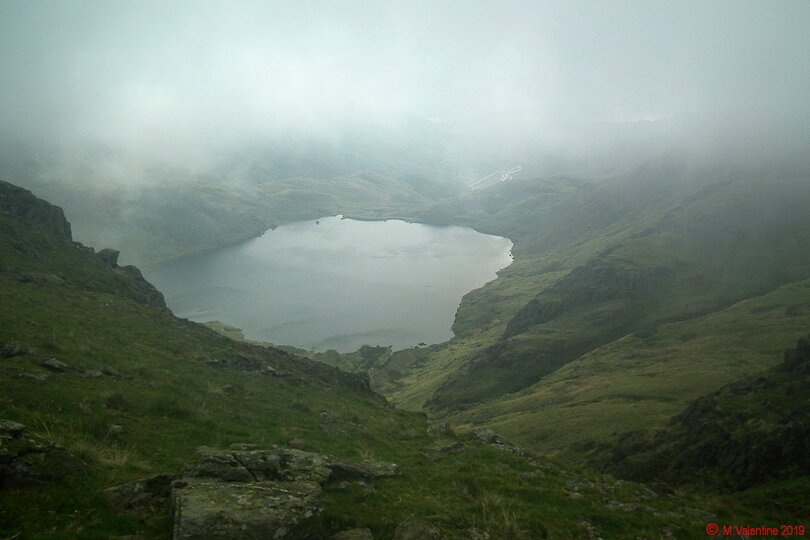 But the mist quickly came back in, with nothing to see until the big cairn atop Brim Fell: - The Ordnance Survey triangulation pillar at the summit of The Old Man of Coniston: - The summit cairn on The Old Man of Coniston, showing the trig point, and OS benchmark arrow on one of the foreground rocks: - A closer view of the 19th century Ordnance Survey benchmark arrow, engraved into the stone: - Back down to Goat's Hawse, and the mist lifts slightly, allowing a view of Goat's Water: - Almost back to Levers Hawse, and the mist had lifted over towards Seathwaite Tarn. (Harter Fell at right, in the distance).
The wind was blowing so hard at this point I could hardly stand up. – I took nine shots here before I got one that looked sharp! But by the time I'd reached Swirl How, the mist was back again! – Another boring record shot. – Swirl How summit cairn: - 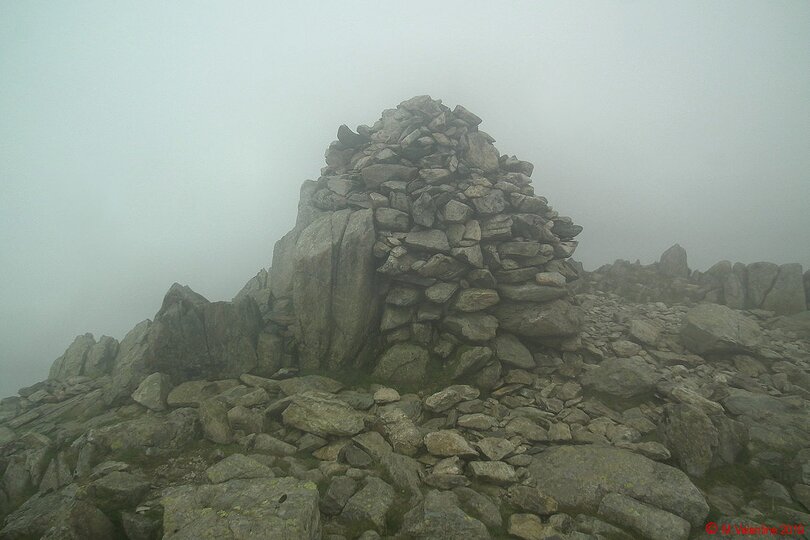 The mist lifts, allowing a view from Swirl How towards Great Carrs. – Wreckage of a Halifax Bomber visible below the crags: - The simple memorial cairn, commemorating the crew of the Halifax bomber that crashed here on Great Carrs in 1944: - The slate memorial tablet commemorating the crew of the crashed Halifax bomber: - Looking back to Swirl How from Great Carrs, with The Old Man of Coniston and Dow Crag still topped by mist, on the far horizon: - Looking down Greenburn Valley from the ridgeline near Great Carrs summit: - Looking back up the ridge from Wet Side Edge to Little Carrs, Great Carrs, and Swirl How. (Part of Wetherlam at left hand side): - All in all a wild and woolly day on the tops, made very memorable by seeing the incredible phenomenon of the Brocken Spectre!

Pmg and 3 others like this post
permalink
WalkLakes recognises that hill walking, or walking in the mountains, is an activity with a danger of personal injury or death.
Participants in these activities should be aware of and accept these risks and be responsible for their own actions.