Day 6 leaving day, so only time for a short walk before packing up & driving home

After 5 really good days the weather well & truly broke with rain starting very shortly after setting off at 7.20am, then getting worse & onto my camera lens so some poor pics. However despite the rain the temps were still quite warm in that I'd started in short sleeves & then removed polo shirt & went bare chested under waterproofs. The things I was thankful of was that it wasn't windy like the previous day & there was a nice large dry barn on the campsite to sort myself out & change in, after hurriedly packing up in the continuing heavy rain after getting back from the walk.

The first stage of the walk was on road & then on the track trough Stonethwaite camping before hitting the steep path up the NE side of the fell, engineered into steps in places, natural in others, through the wood that thins out as you approach it's higher elevations, before coming onto the flattish gradient of the top area that was wet & boggy in places although the rock towers/outcrops gave drier routes round but limit views. The path down was grass with stones and with the heavy rain wet although parts would be wet I think whatever the weather. Going down with no obvious path underfoot I thought I saw one to my left, but having gone across it wasn't any better so I just semi followed Rottenstone Gill down to a more obvious path & back to the campsite.

The other thing I'll add is about navigation & an addition to this POST that my route print out that was in a pocket, turned to mush & anything paper unprtoected would as well. Plus I think Paul mentioned it in a post somewhere but my touchscreen GPS was jumping screens madly as the rain hit the screen, so out came waterproof map. At my turn up point, the mighty looking Eagle Crag that I'd done in 2017 The path follows Big Stanger Gill up, this pic came on the 1st bend, looking up as things get even steeper 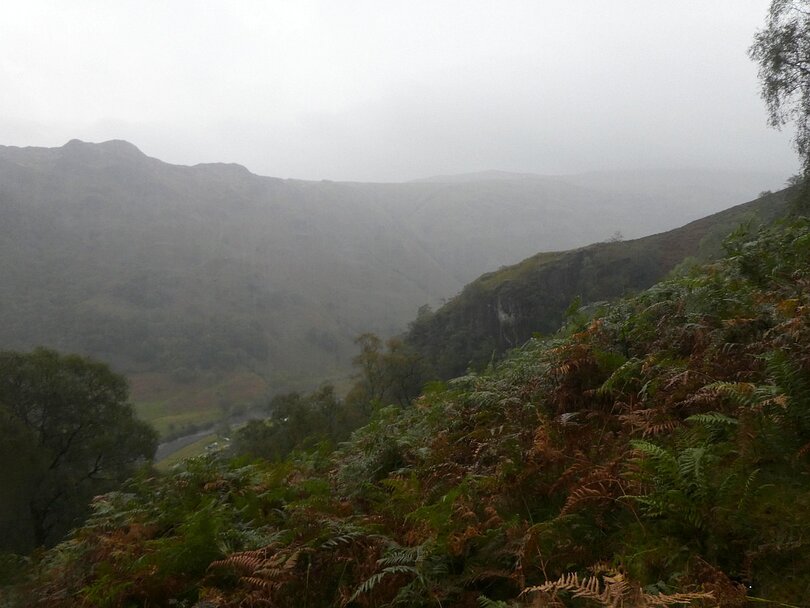 Getting above the wood looking back over Stonethwaite to Borrowdale proper Approaching the big right hand turn of the Gill & path, some of the rock towers /outcrops, the path goes below them Just after the bend a series of cascades on the Gill, a short distance ahead the path crosses to the Gills northern bank Semi same place, the view out west with the distinctive Fleetwith Pike dead ahead, with High Stile & High Crag just visable behind & the cloud down on Dale Head and not a speck of blue in the sky. Looking back at the Tarn & the herdwick sheep, having not seen any before there were a reasonable number round the tarn, they'd probably moved there for more shelter Nearing Coombe Gill, the new track & engineering work on the hydro-electric project it's supposed to be finished summer 2020 Down to Combe Gill, this was one of the pics I took to asses the feasibility for the future of crossing the Gill onto the Thornythwaite path with feet dry, which looked hopeful & with water diverted to the hydro scheme in future should be good, always depending on recent rainfall though.

So to summarise my 5 & a bit days of walking holiday it was 71.8 miles of length, 4.7 miles of ascent & 34 Wainwright's on 5 full days of good to excellent conditions & a bit of one poor, but it wouldn't be the Lake District without some rain & cloud. Plus a thank you to my neighbouring campers on the site who'd repegged my tunnel tarp the previous day in the wind.