We decided to do Loughrigg Fell and arrived at White Moss Car Park on the A591 between Ambleside and Grasmere mid morning. I was joined today by 2 family members (my eldest son and my eldest daughter's partner) who have recently discovered the joys of walking in places like the Lake District and were keen to get stuck in. The weather was dry but the cloud was very low today so no blue sky and no views to be had. There was no wind at all and the lake looked like glass.

Anyhow, we started off by leaving the back of the car park on the clearly marked path. We soon crossed a small bridge with a ford alongside and followed the path to the next bridge across the River and proceeded through the woods ascending gently until we reached a gate where you join the Loughrigg Terrace path. Here we turned right and followed the gently ascending path until we reached the stepped ascent up the fell. There are a few small rockier sections higher up but they are easily negotiated and don't really slow your progress. As we climbed the cloud got thicker until we eventually reached the Trig Point on Loughrigg Fell. The visibility up there wasn't very good and there was no real indication of which way to go using the usual surrounding views and the humps and bumps of Loughrigg Fell plateau. Its at this point you would reach for compass and map and figure out your next steps. However, I had mistakenly brought OS6 instead of OS7. Fortunately I had researched many walks of the Fell prior to coming here and as its a very popular fell I knew that if we followed the most used and worn path, that we would eventually get down off the fell to safety. As there was nothing to see due to low cloud we weren't bothered which path got us down. We also had phone signal so this helped with directions etc. having signal won't always be the case though and its so important to have a real map and compass and to know how to use them to get you to safety. As this is a small standalone fell and there are many many paths up here, you would eventually get back to ground level regardless of which path you take. The same cannot be said for other fells and I will be taking this lesson and learning from it. Always make sure you double check you have the correct equipment for the place that you're going.

After following the most trodden path up and down and around the many humps and bumps up here, we eventually came across the wall I had seen in other walk reports on t'interweb which I knew was our way down. After a wet and muddy descent we got to the road alongside the River Rothay and stopped for a photo opportunity on the stepping stones which wasn't our route today. Carrying on down the road we soon turned left back onto a path that takes you to Rydal Caves and Loughrigg Terrace. We came across a simple wooden bench with majestic views over Rydal Water where we stopped for lunch. (chicken soup all round). Then off to visit the caves and the area nearby with lots of small slate stacks that resembled Japanese garden art. (or for those of you with kids, Makka Pakka stones) Someone must have started this a while ago and other walkers have continued to do it. We had a go at building our own but it wasn't as good as some of the others on display.

We then rejoined the path that leads down to the main Terrace path and then back through the woods from the beginning of the walk and back to car.

We all loved the walk and it had plenty of variety to keep our interest peaked. It ended up being approx 5.4 mile in all and took just under 4 hours. It was only the cloud and the ruined the views that was the disappointing element today. On any other day the views would have been spectacular but doing the walk in today's conditions was a valuable experience and a few lessons were learned along the way. This is a must do walk for anyone's Lake District Bucket List. Better in sunny weather but excellent nontheless. Thoroughly recommended.

Eldest son demonstrating his walking technique before we departed the car park via the path behind him. 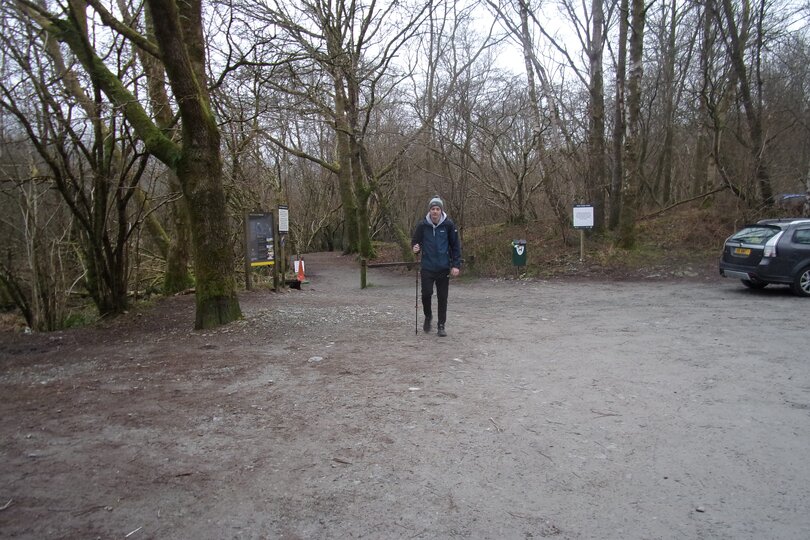 The first bridge with ford alonside 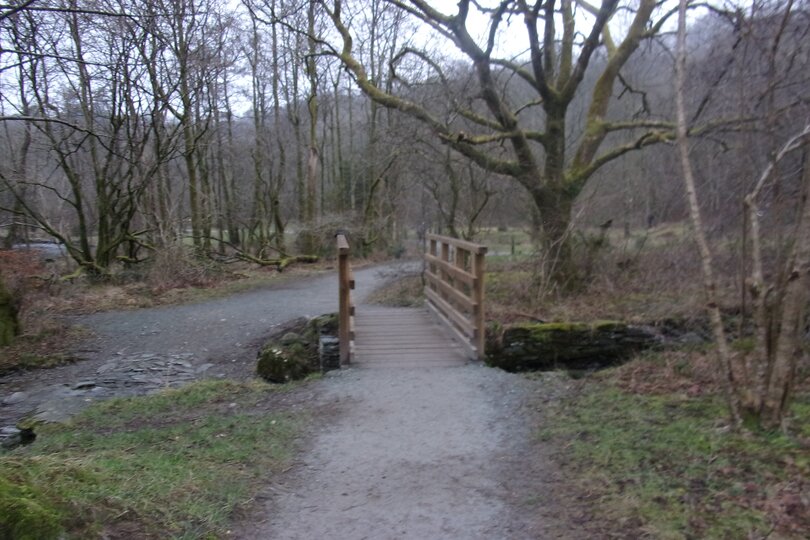 The second bridge which crosses the River Rothay 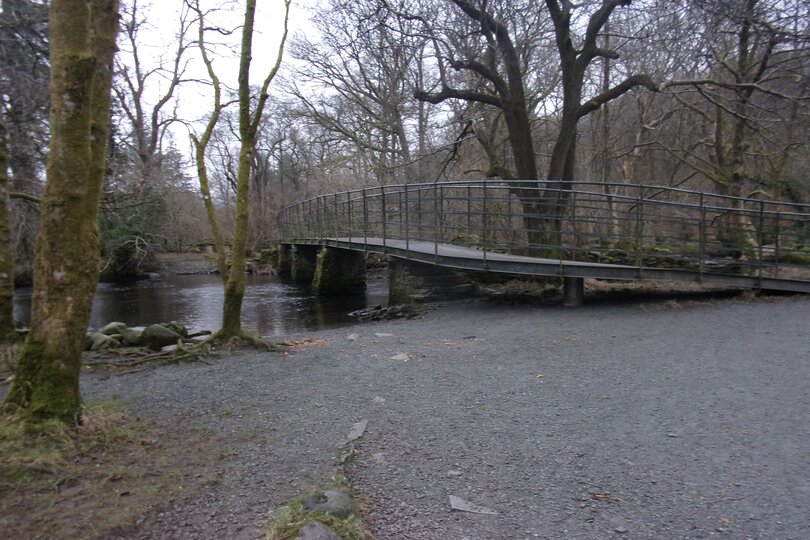 Take the larger path straight ahead

Follow this path that gently ascends through the woods 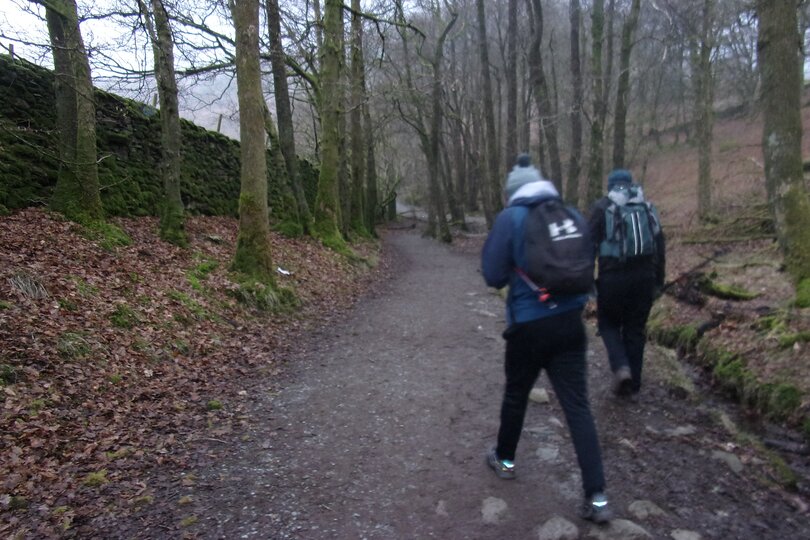 Go through the gate and turn right 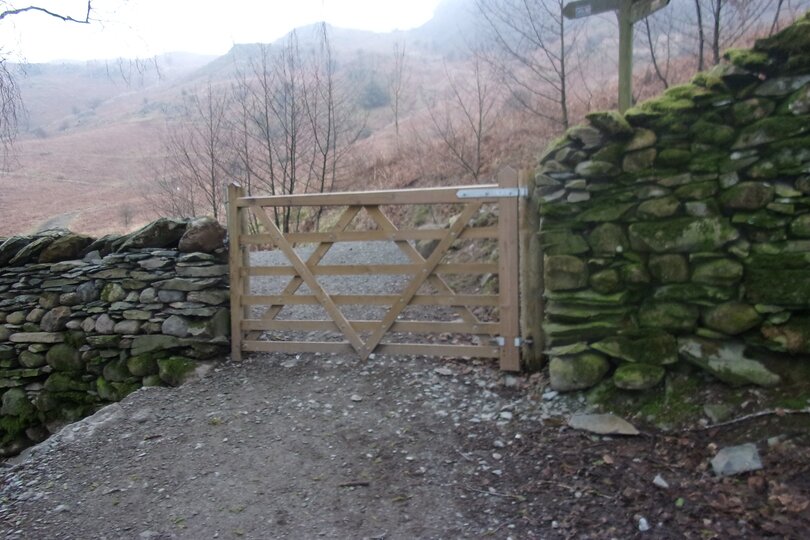 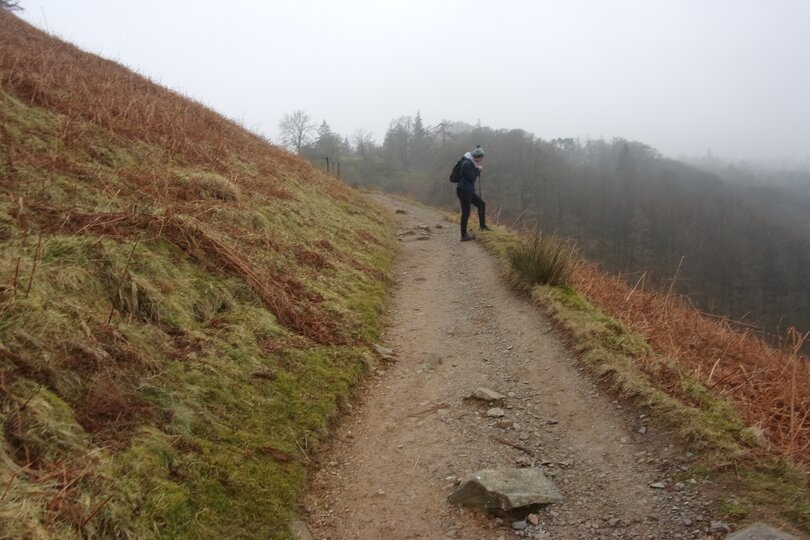 Just before the woods you'll be turning left up the fell via the stepped pathway. 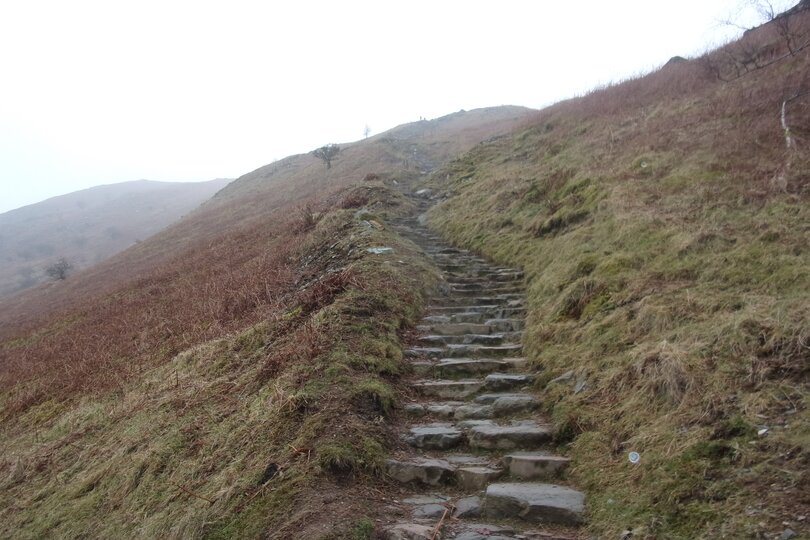 This path goes most of the way up to the plateau with just a couple of easy and smaller rockier sections to negotiate. We seemed to have taken a more direct route to the summit than some photos I've seen so we must have missed a path to the left somewhere. There are many paths up here and its easy to take the wrong one in low visibility. 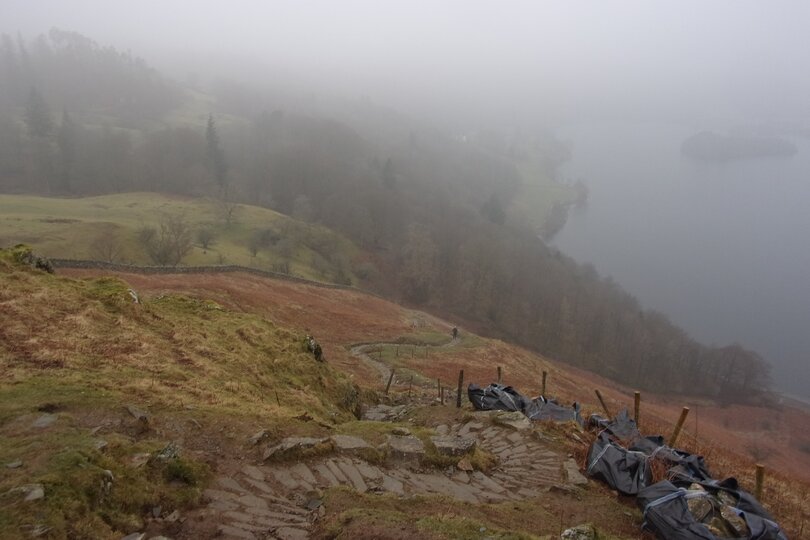 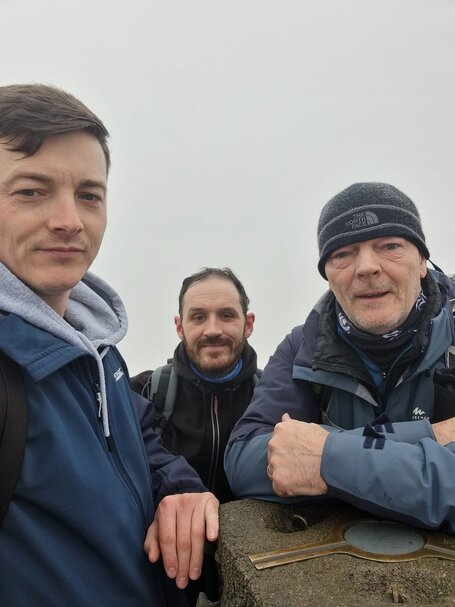 There are no pics of the rest of the Fell until we reached the bottom due to terrible visibility. I will update this walk after I've done it again in better weather.

Passing the stepping stones brought out our inner child and we just couldn't pass up the opportunity to have a go. Just beware of a fallen stone in the middle. 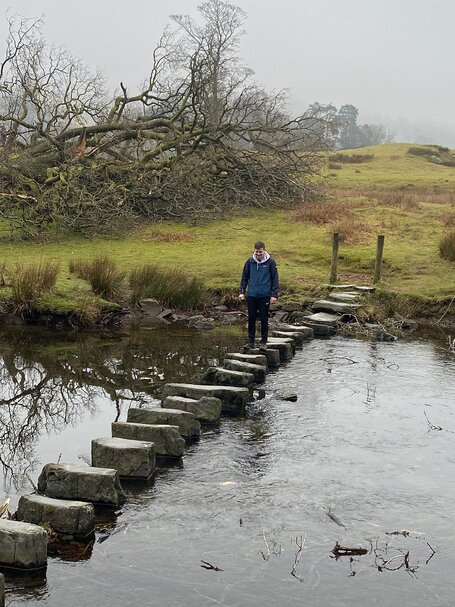 Anyway, back to the walk and here the boys are demonstrating how to use the bench we came across prior to scoffing lunch. 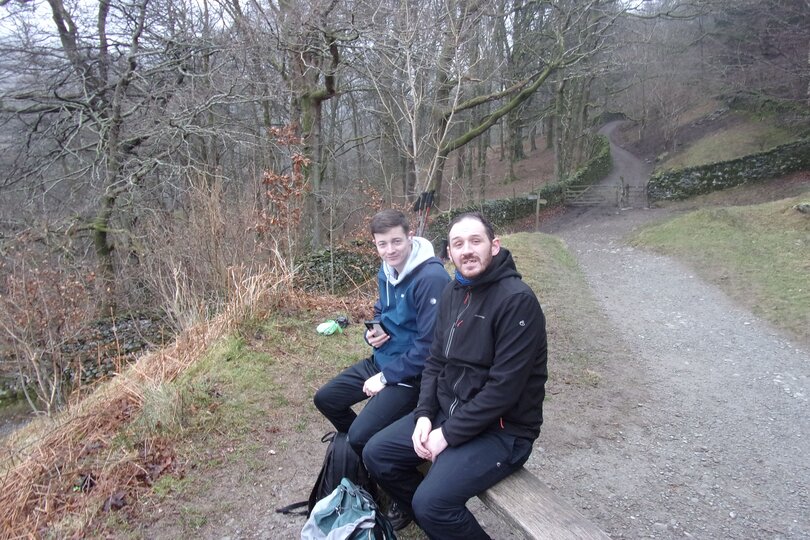 The view for lunch and probably the best pic of the day. 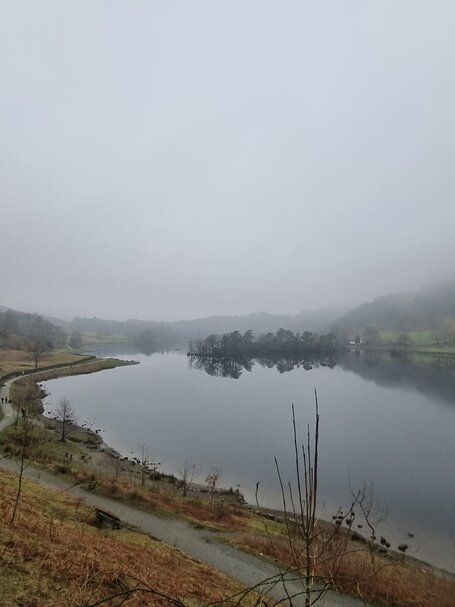 We carried on after lunch to Rydal Caves. A lot bigger than I imagined and a brilliant little detour from the walking. The cave is partly permanently flooded but there are stepping stones to get in and have a good mooch around and get some nice pics. There is a smaller cave lower down but it requires a bit of effort to climb the 15ft sheer entrance which we decided to decline today. 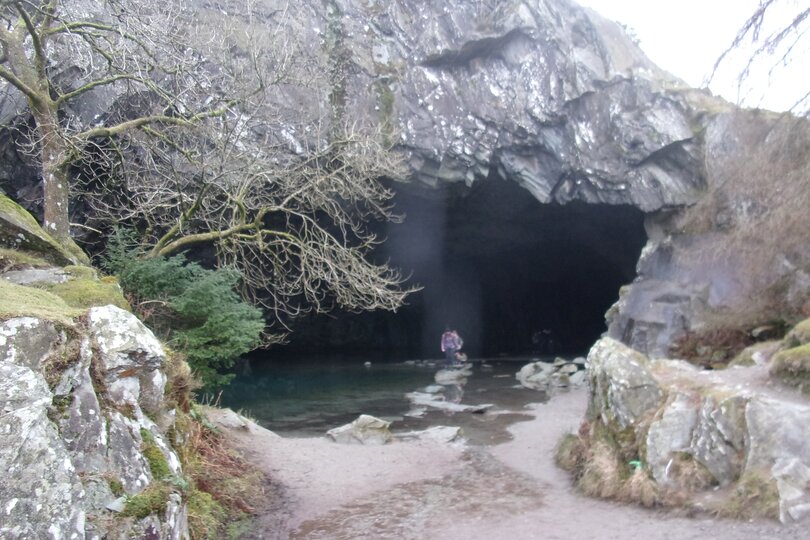 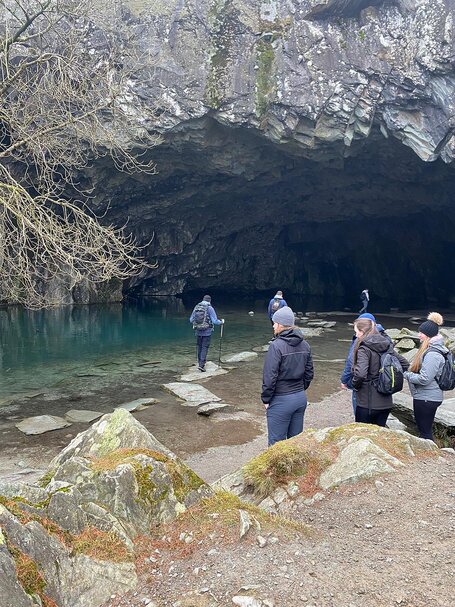 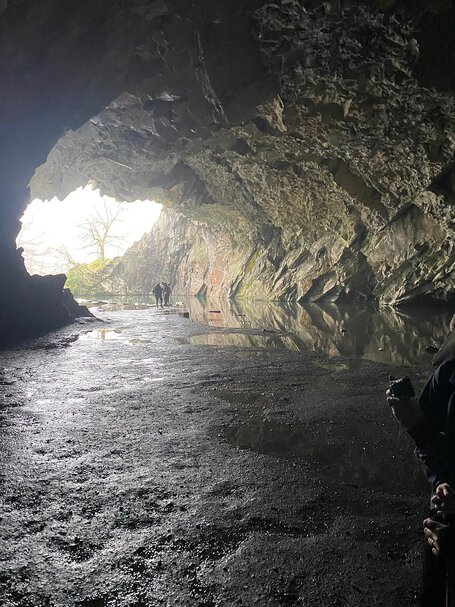 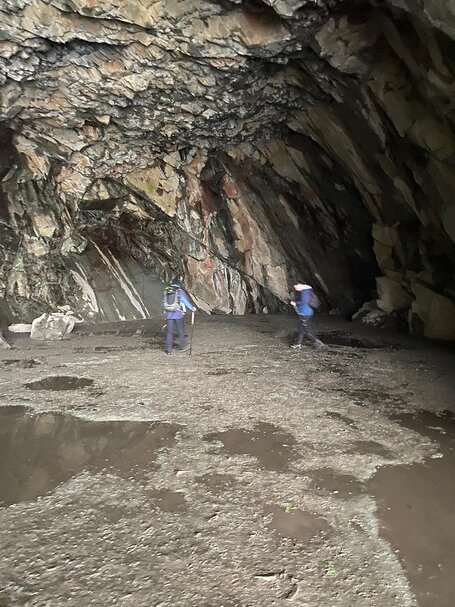 Adjacent to the cave there's a flat section filled with broken slate where people have had a bit of fun building small towers that look like mini Japanese garden art sculptures. The boys demonstrating their artistic side or their inner Makka Pakka 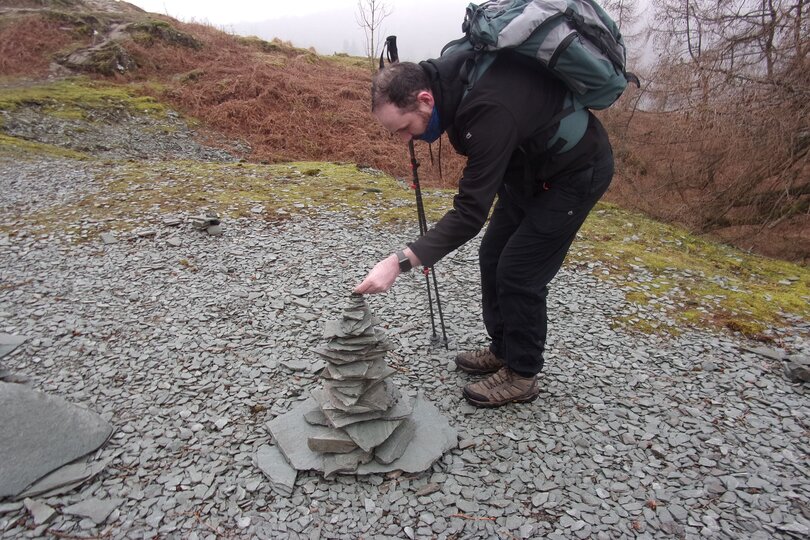 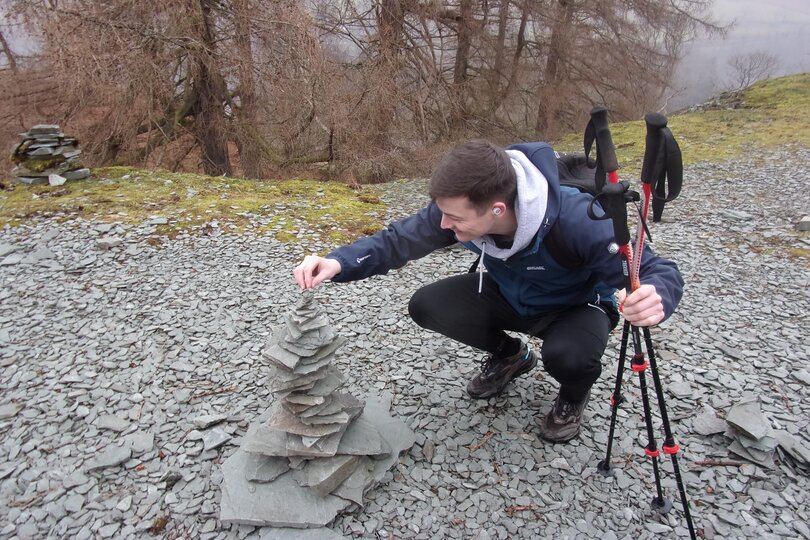 The walk from this point on was just following the path back down to Loughrigg Terrace path for a few hundred metres then through the gate into the woods, gently descending through the woods and across both bridges back to to car park. Even though the visibility was horrendous for a majority of the walk, it was still very enjoyable and we all learned a few important lessons along the way. Walking in the Lakes isn't always a sunny day affair and experience gained by doing a walk in today's conditions is invaluable. Hope you enjoyed this walk report and apologies for no pics of the top of the Fell but there was nothing to take a picture of due to low cloud. I will hopefully be doing this walk again in the summer and will either do a fresh report of just add a few pics that may be missing. Regards Big Stu, Little Stu & Chris

Jandy and TallPaul like this post
permalink
WalkLakes recognises that hill walking, or walking in the mountains, is an activity with a danger of personal injury or death.
Participants in these activities should be aware of and accept these risks and be responsible for their own actions.