Forecast for Saturday looked to be quite good albeit with strong winds expected - didn't materialise until later. Only one car parked before me in the roadside layby at Ardvorlich. Set off about sunrise south up Glen Vorlich.

Followed the path initially, went over a wee bridge then gained more height. Left the path probably a little too early heading SW towards Meall na Fearna - some soft snow and heather to get through before gaining more height alongside Ben Vorlich.

Skirted west of Beinn Domhnuill then SE through some peat hags and snow fields towards Meall na Fearna. 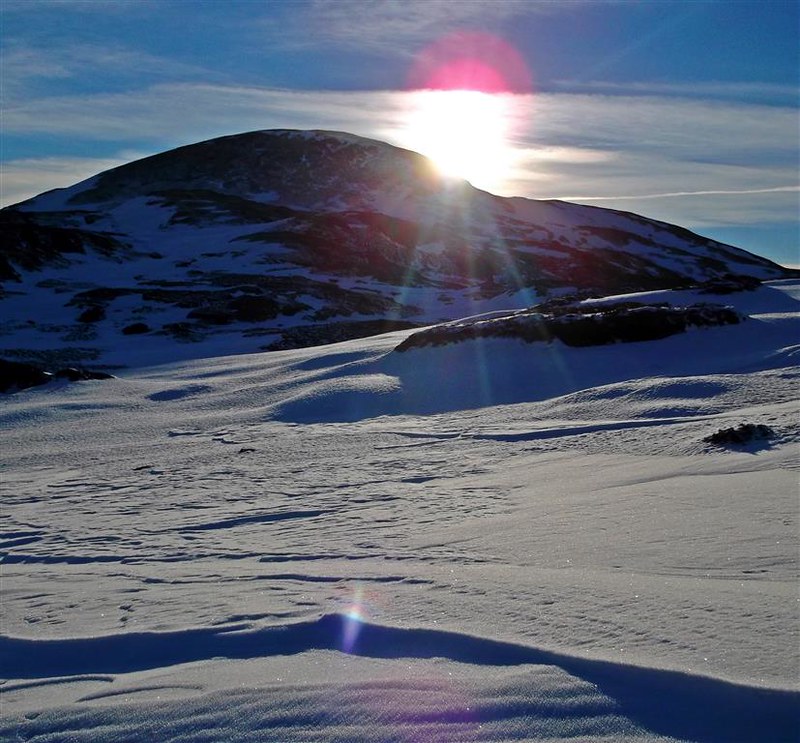 Stuc a Chroin behind Ben Vorlich

Clear views from the top of Meall na Fearna

There was a bit of a wind at the summit but not too bad. Set off SW down to Glen Vorlich with the intention of picking up the SE ridge of Ben Vorlich.

Didn't take long to find a suitable point to cross the burn.

At the other side, stopped to don the microspikes just to give a bit more grip (crampons not needed) and undo the ice axe - then up steeply to gain the main ridge.

View over to Stuc a Chroin

Onwards and upwards - was passed by a hill runner

Got to the top and met a few other walkers. The wind suddenly became ferocious - difficult to stand some times in the gusts. Took a few photos then walked down to the SW out of the wind to stop and have some lunch.

After lunch, continued down to the bealach above Coire Buidhe then northwards up Ben Our.

A wee bit slippery descending from Ben Our but it does give some nice views over Loch Earn.

Met some more people on the way back to the car - many more cars parked at the side of the road now.

What a grand day to be out, even with those winds. Super photos.

What he said. What camera are you using for this rockhopper?

What a grand day to be out, even with those winds. Super photos. cheers Paul - hasn't been a great start to the year so far, not many chances to get out - fingers crossed that the weather starts to improve

What he said. What camera are you using for this rockhopper? hi Clive - today I just took a Fuji compact AX350 16mp - only has a 5x zoom but that's generally OK - doesn't have the quality of a bigger camera but it's small and practical and has a number of modes - tends to be adequate for viewing photos on a pc screen esp as I reduce them in size to upload to flickr anyway - cheers