My first Munro and one of the big ones, in that Cairn Gorm is one of the Scottish 4000s too. Having said that I've done higher ascents before now: starting from less than 50m about sea level to go up a Corbett, but that's hill bagging for you.

Anyway Beth took me up what I think was probably the easy way from the funicular car park, up Fiacaill a' Choire Chais to the 1141m top and then across to the summit. It was a quiet day with next to no wind (unlike the day before and the days to come) but there was a lot of cloud which we were effectively walking in and so very poor visibility, seldom more than 100m, and we didn't see many people all day.

Although it was effectively raining on us the humidity was so high that both of us ended up walking in just base layer on top and only putting more on when we stopped which we did at the summit where we lunched in the lee of the weather station (the only place where there was a bit a breeze). 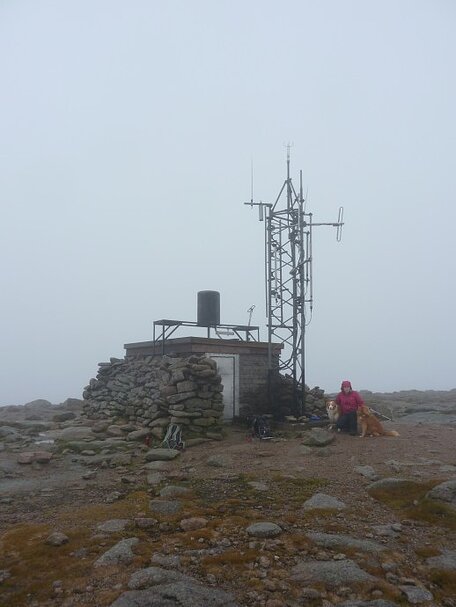 Coming down I was vaguely appalled by the path they've put in between the summit and the Ptarmigan station. It's a real ankle turner. We got off it and walked alongside. How the hell tourists in less suitable shoes manage I'll never know.

Anyway I never did get to see the view from the top although I was amused that there was effectively a tea shop close to the summit (in the Ptarmigan) as the running joke of our holiday was to go to some remote glen, walk for some hours and then one of us would say "so ... where's the tea shop again?". Cairn Gorm was about the only place that actually had one ... but we resisted.

Like you I also didn't see much on my first trip up this hill but that's often the way of it. Would agree with you on the corbetts - they may not be as high as the munros but can often make for a harder walk, eg they're steeper, fewer paths/tracks, more descent/ascent in between. That said, they can also have some great views ! - cheers

Ah yes, I'm reminded of the time we tried to walk up Beinn Ghobhlach* when we were on holiday at Ullapool. Should have been an easy little ascent ... but we never found any sign of the path in the guidebook (or any other paths if remember rightly) and were struggling through heather and bog all the way. We never did get to the summit.

However the whole hill was alive with lizards, I saw more that day that I've ever seen in my life before, so it made it a memorable day despite that.

As we just discussed, Beinn Ghobhlach, is in the SMC's Corbett book but is and has been a Graham. It's in the 'index of other hills'. We thought it was going to be an easy little hill, a mere stroll compared to a Munro, little did we know how boggy it was. Still, a good day out and that's all that really mattered.