This was another mountain that I'd seen frequently but never walked, so one glorious day I bagged it and for those of you who've read my other walk reports, it was another long round day walk. It was a very peaceful wilderness type walk on which I only saw about half a dozen other people all day and away from roads & civilisation and there noise. Since this mountain is in Wales I'm using the welsh spelling.

Pic 1 - This was actually on my drive up to where I parked and is the Nant Y Moch reservoir and the clear skies you always hope for. 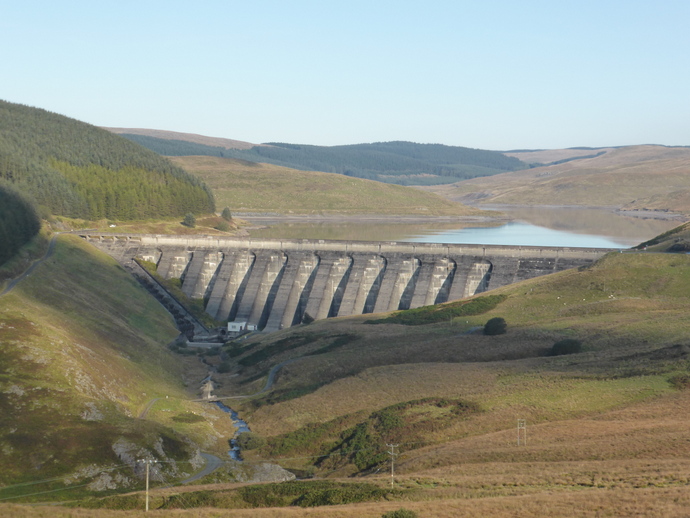 Pic 2 - How things change. The summit shelter of Pen Pumlumon Fawr when I arrived. 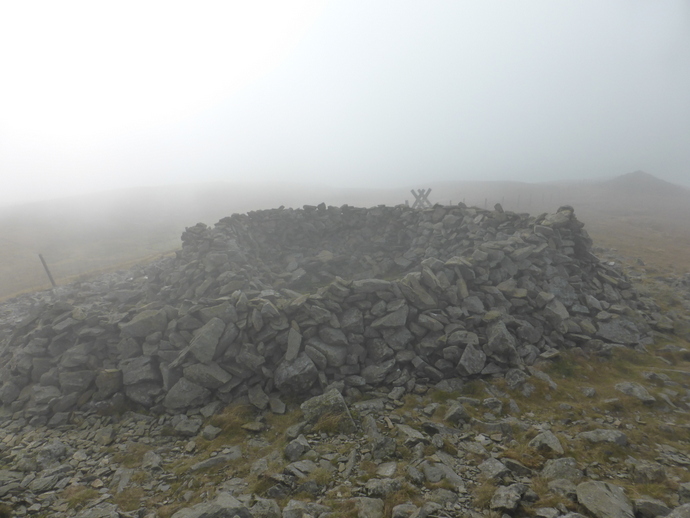 Pic 3 - After lunch and a nice chat, things had changed again, for the better. 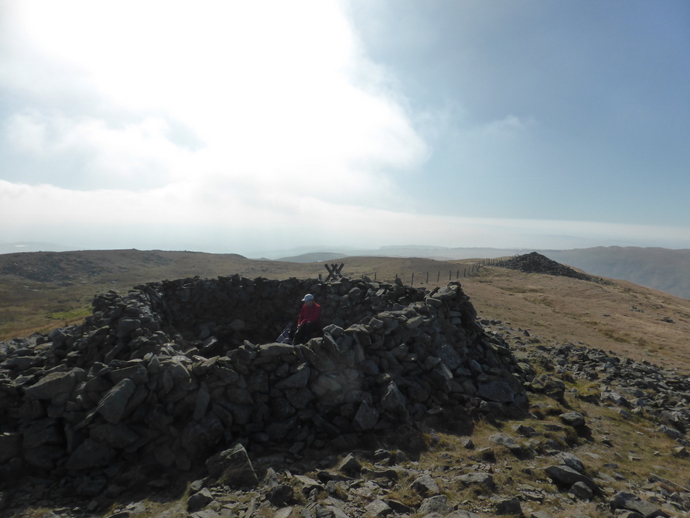 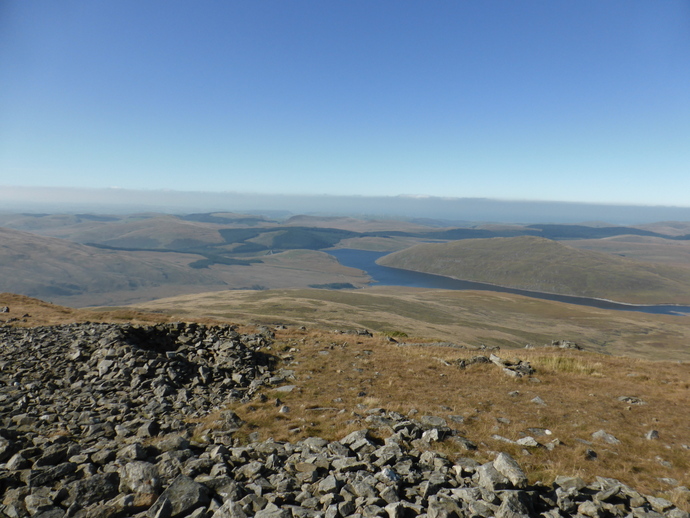 Pic 5 - Moving to the edge gave me a view down to Llyn Llygad Rheidol where I was visiting later. 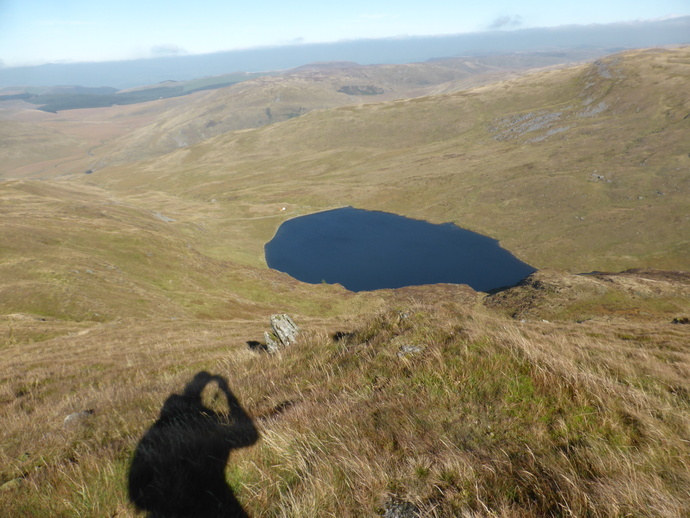 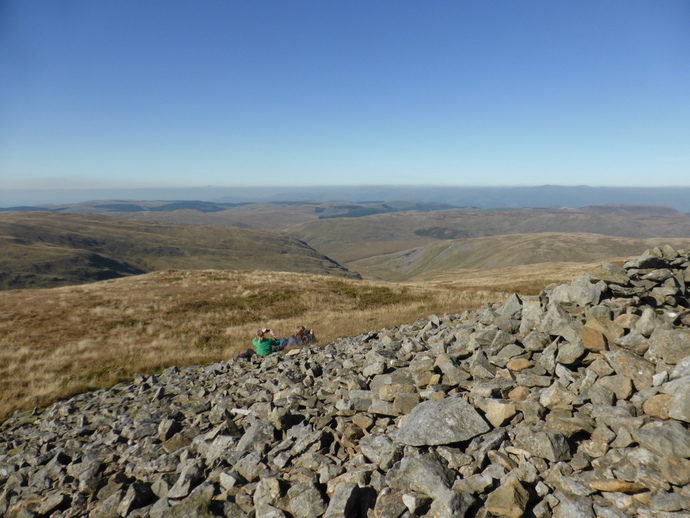 Pic 7 - Having walked near to the source of the River Wye I reached this - and for those who can't read Welsh it said "Source River Severn" on another side. 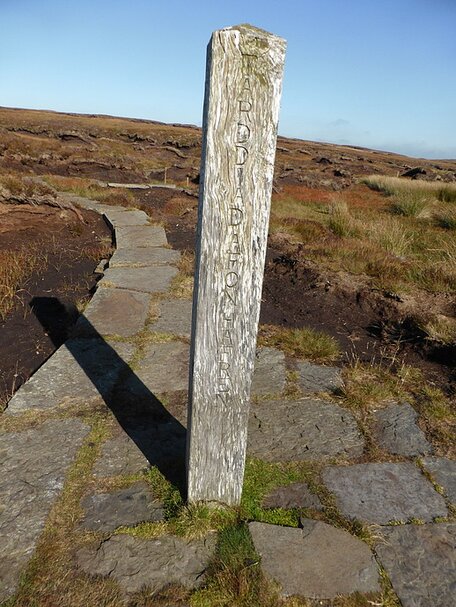 Pic 8 - The photo doesn't do this justice in that approaching this it looked exactly like its name "Craig Y Eglwys" suggested which is rock church. 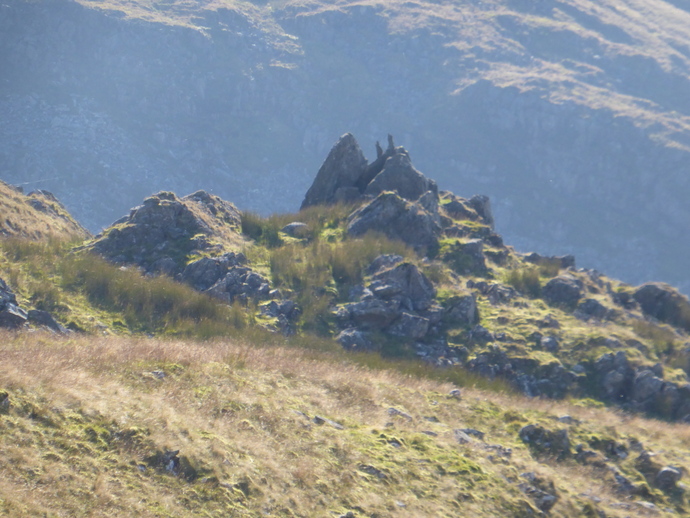 Pic 9- Looking down upon Afon Hengwn and little did I realise what was to come. 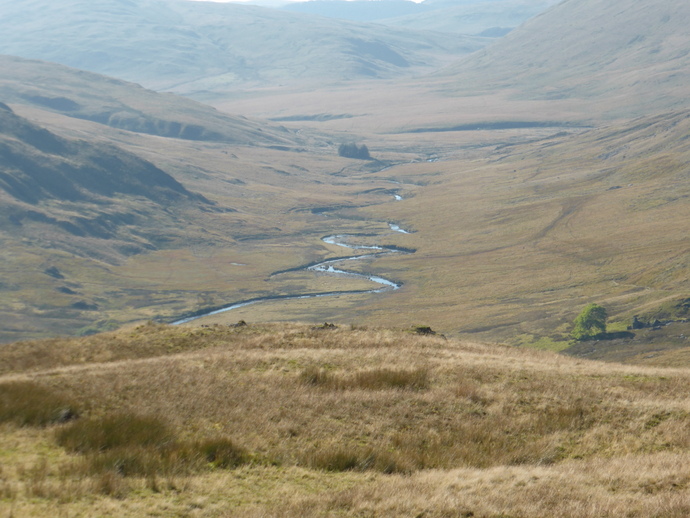 Pic 10 - Dropping down to the river 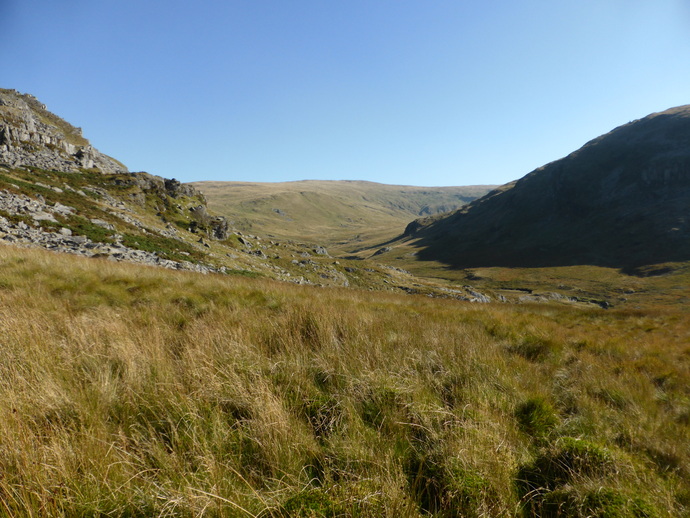 Pic 11 - This was one of the few trees on the walk and from its shape obviously subject to the wind. 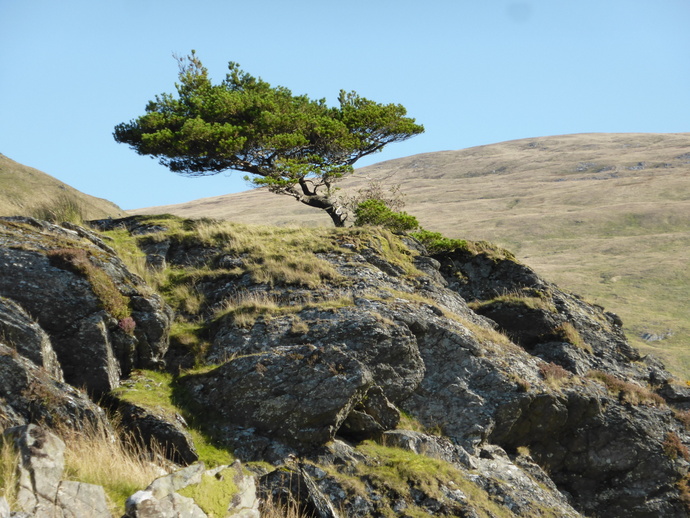 Pic 12 - Down at the river looking down its length and the surrounds give you an idea of ground conditions as I walked down its valley - Rush, clumpy grass, pure wetness plus the odd hole you found when you stepped in it and the path on the map non existent until getting near where I turned off. 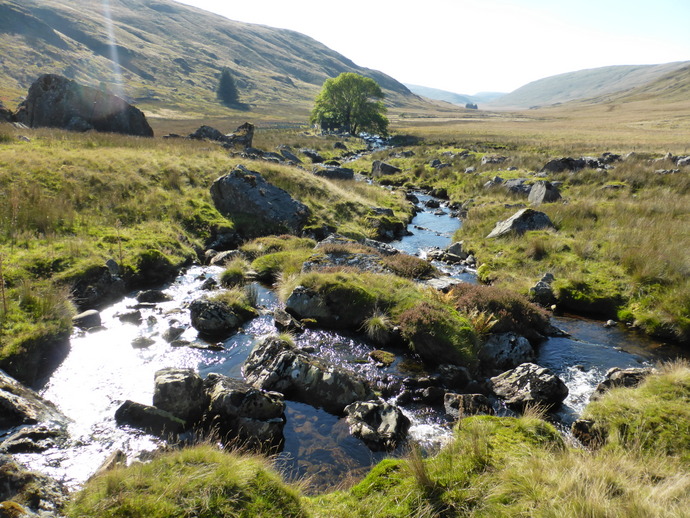 Pic 13 - Cascade on the side stream it was this confluence I came down to. 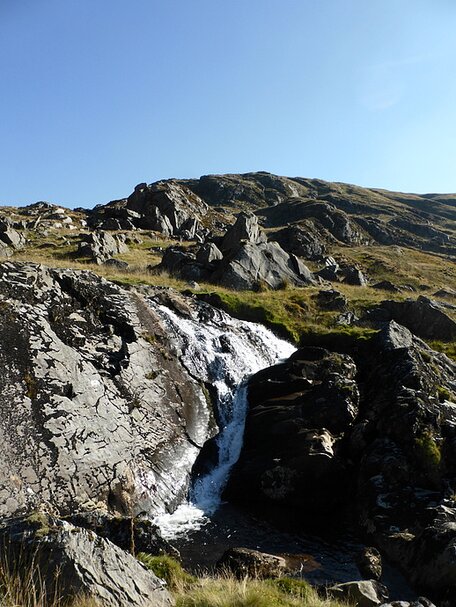 Pic 14 - Llyn Llygad Rheidol with Pumlumon Fawr behind, who's waters end at the sea where I had my tea. 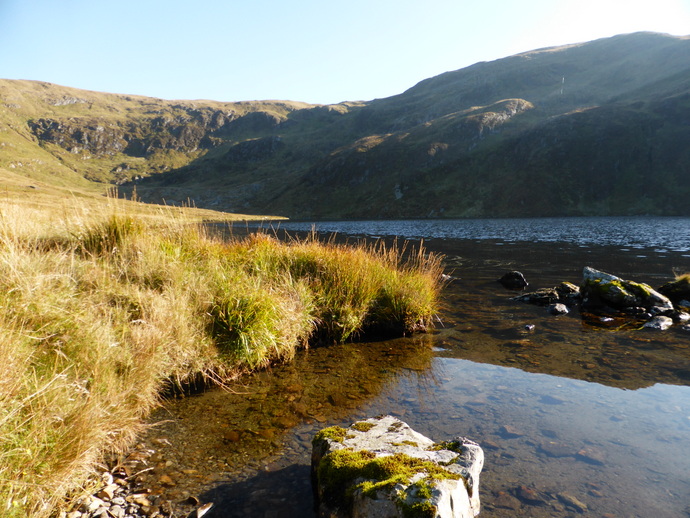 Pic 15 - Llyn Llygad Rheidol again. From here it was a stone vehicle track round the bottom of Pumlumon Fach back to the end.

Pic 16 - Rounding the Northern side of Pumlumon Fach the Nant Y Moch reservoir came back into view. 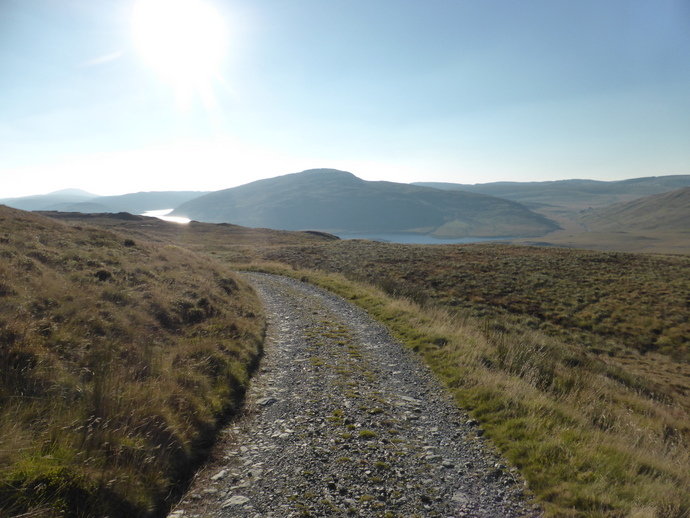 Pic 17 - This was actually as I drove back down from the reservoir, not an animal to mess with unless you want holes in your vehicle and they were reluctant to move. 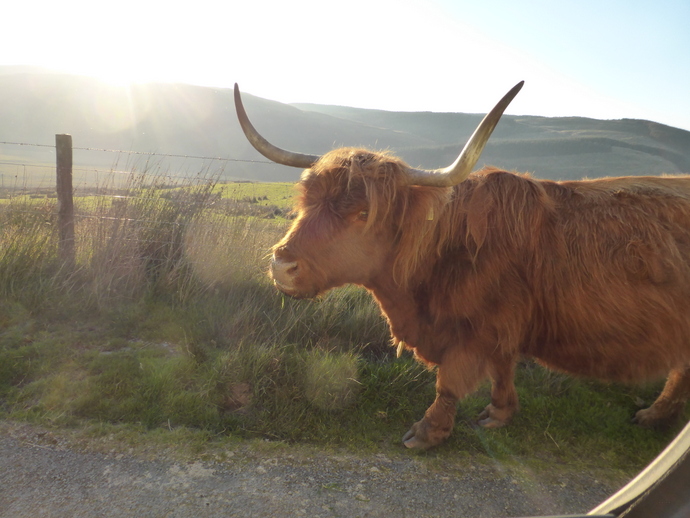 Pic 18 - This was my tea, fish & chips on the beach at Aberystwyth and it's actually quite rare for the sun to actually go into the sea & not a layer of cloud just above. 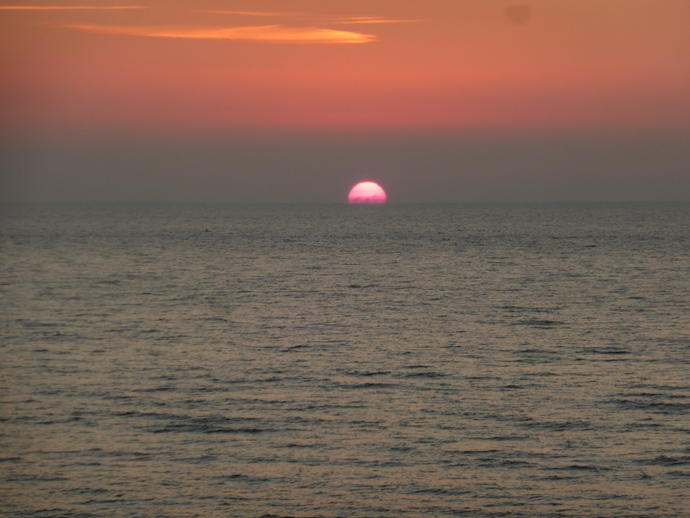