The escarpment of The Black Mountain inc The Carmarthen Fan

Having never done any proper walking in the Brecon Beacons I thought I'd leave my boot prints upon them, I initially planned to do Pen Y Fan, but then hearing that it can be rather busy I searched around for a quieter alternative and so came across the sandstone escarpment that forms the northern edge of The Black Mountain range / Y Mynydd Du (not to be confused with the plural ones to the east). These mountains are the western end of the Brecon Beacons, it is the escarpment west of the county border that is the true Carmarthen Fan, but often the name is applied to the whole length. Having done it I think it offers a spectacular scene and like many views you can't truly capture the whole thing in photos. Plus what surprised me a bit when reviewing my GPS data was that my total assent had been greater than my long walk last year that included Scafell Pike.

I wanted this to be a long walk to check out my capacity relative to some I've planned for the Lakes later this year hopefully and the forecast was for a cooler day than some which was ideal, I realised that being out on the hills, especially all day, I was likely to catch the odd shower that was around, I caught 2 of them, the first was just after rounding the bend by Ty Henry, although I meet a backpacker again on the top, I'd overtaken her on the initial stretch up from where I'd parked and whilst she'd gone on up & along I'd gone along the bottom then round & up, who said it had been hail for her. The couple of showers that did come then seemed to help clear the cloud that was around and one saw rain obviously falling more out to the north west, I went in for absorption whilst they lasted rather than get waterproofs out. Having been subject to a strong wind a times whilst below the edge, although you are still up at over 600m there for a while, once on top it was very strong with gale force guests at times such that once or twice when I'd stopped to take photos it rocked me. Having started out in T shit & shorts I stayed like that most of the time whilst below the edge & whilst on the climb up after halfway, but added fleece with the increased exposure on the tops.

I got the quietness I'd wanted meeting only 3 other groups, although looking back at my pics I counted about 6 cars in the car park from one taken on top. Another point to note is that the car park itself is quite isolated and having gone way down the scale of roads the final ½ mile is a rough track, although once you're there it is a reasonable size. 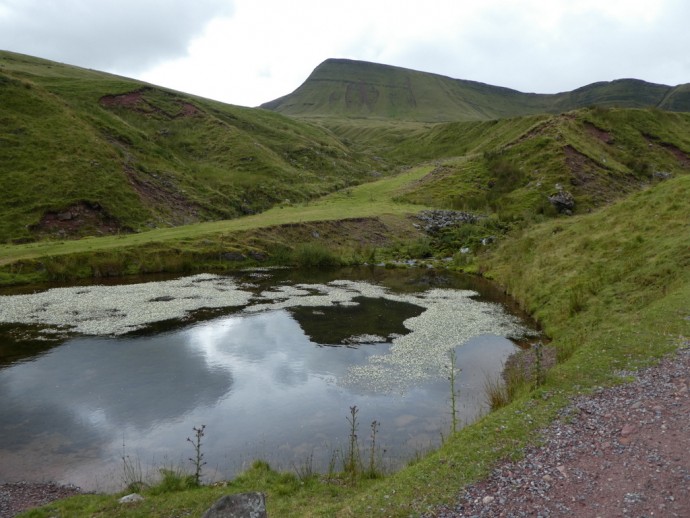 Pic 2 - Having got up & passed Llyn Y Fan Fach, the aqueduct you walk alongside that feeds water into it. The lake is hardly visible in this pic but Waun Lefrith is the back drop straight into it. 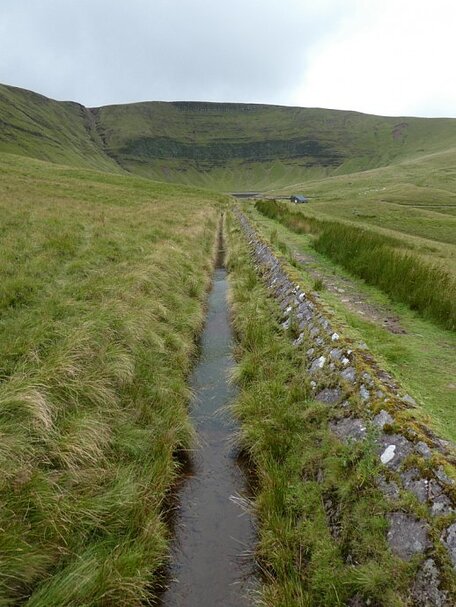 Pic 3 - Although I talk about the path below at this point it's actually about 1/4 of the way up the edge. 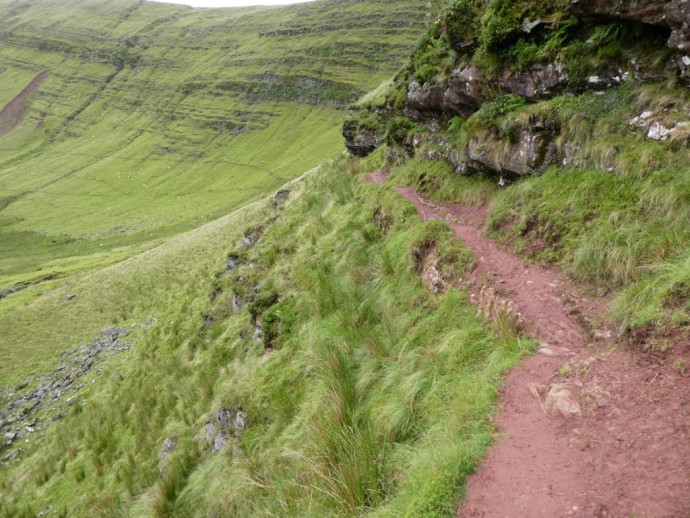 Pic 4 - From below the slope of Fan Foel the magnificent projection of Picws Du & where I'd be walking on the second half. 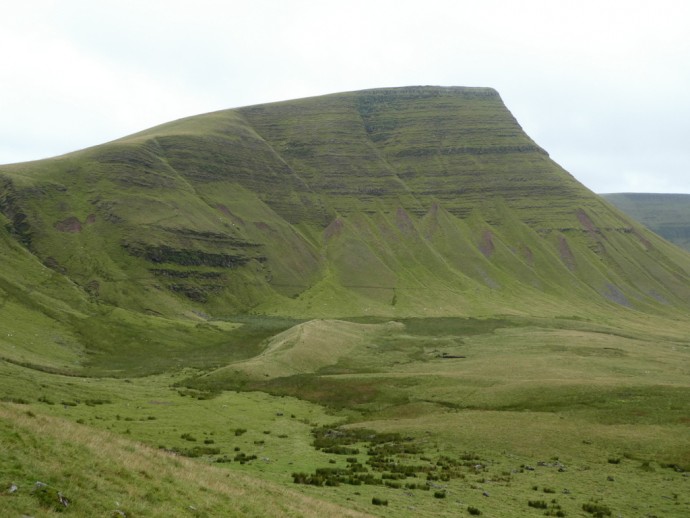 Pic 5 - As one starts to round the projection of Fan Foel you've moved north enough & reached nearly 650m that you see back to Picws Du & Llyn Y Fan Fach and its backdrop.

Pic 6 - Llyn Y Fan Fawr from its northern end with Fan Brycheiniog cut off on the right & the edge rising up to Fan Hir left of centre. 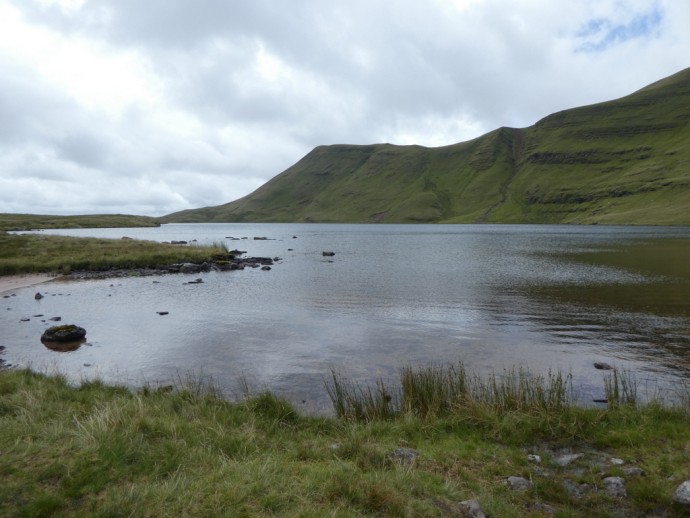 Pic 7 - Llyn Y Fan Fawr from the south showing how the lake sits in just a slight hollow with what seems minimal ground to its east stopping it flowing all out. You can see the path bottom right that has come round it and a bit of the one left that heads up the edge for those wanting a shorter walk.

Pic 8 - The mile or so length of the escarpment that goes from Fan Hir and slowly descends towards Glyn Tawe, you are walking on a little ridge of a moraine about 50ft high at this stage that rises up from the foot of the escarpment before sloping off down to open rough grassland.

Pic 9 - having rounded the end and gone up the step slope and back out into open grassland you get to see over the escarpment with the lump on the skyline pretty much dead centre being Pen Y Fan.

Pic 10 - Looking forwards the same edge as Pic 8 but from above this time and with a person descending from its summit showing the scale. 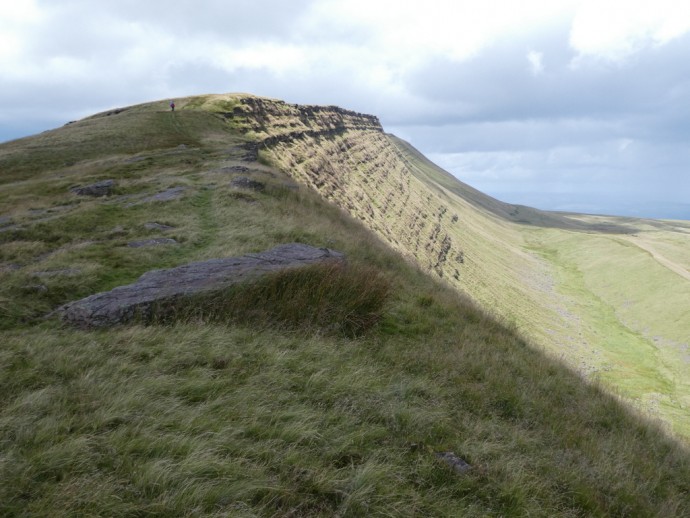 Pic 11 - Looking back from top of Fan Hir at the escarpment and where ones walked up. 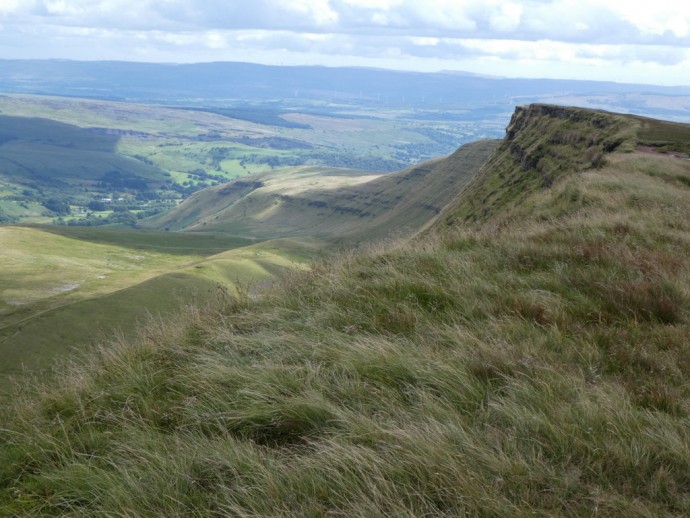 Pic 12 - Approaching the highest point on this walk the summit of Fan Brycheiniog with its very nicely constructed shelter & trig pillar. This point provides truly 360 deg views and through the haze the bulk of Cornwall/Devon was discernible. Also at over 800m the next higher point north is Cadair Idris. 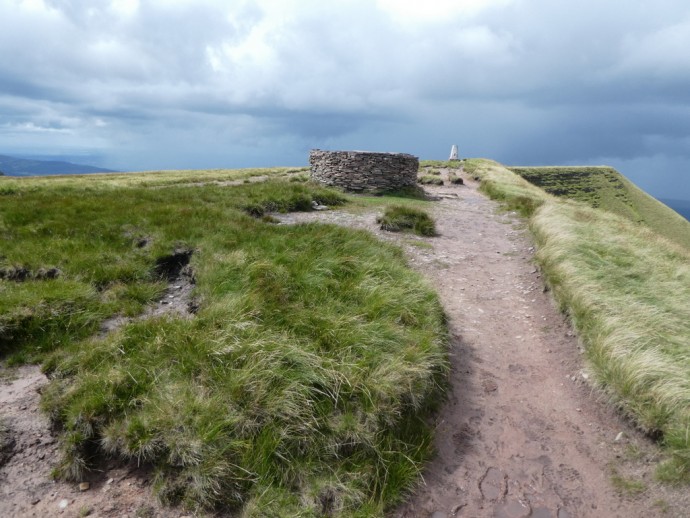 Pic 13 - From the promontory of Fan Foel looking back at the edges face with Llyn Y Fan Fawr below. 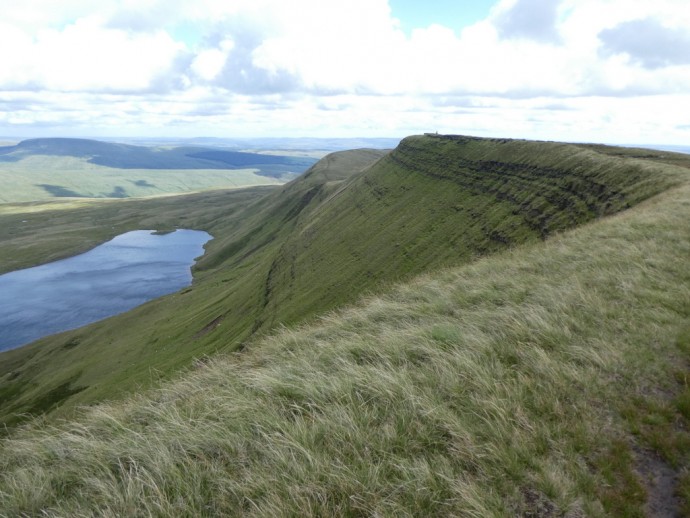 Pic 14 - Having moved on a few minutes from the last pic the view forward of Picws Du and Llyn Y Fan Fach beyond sitting in its enclosure, plus the general landscape round in the distance. 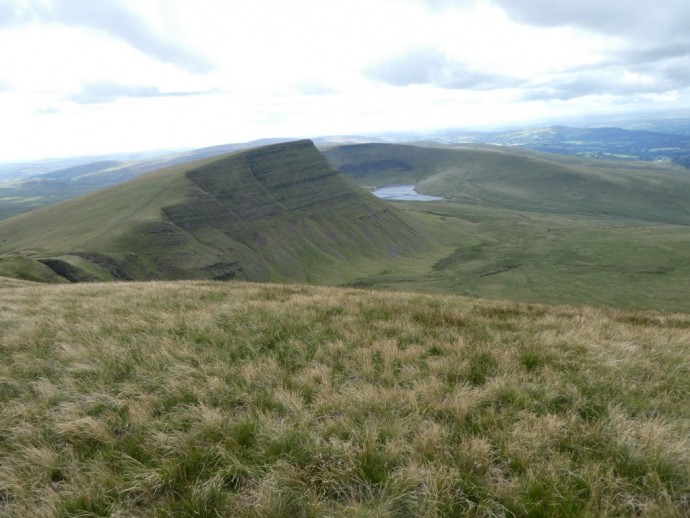 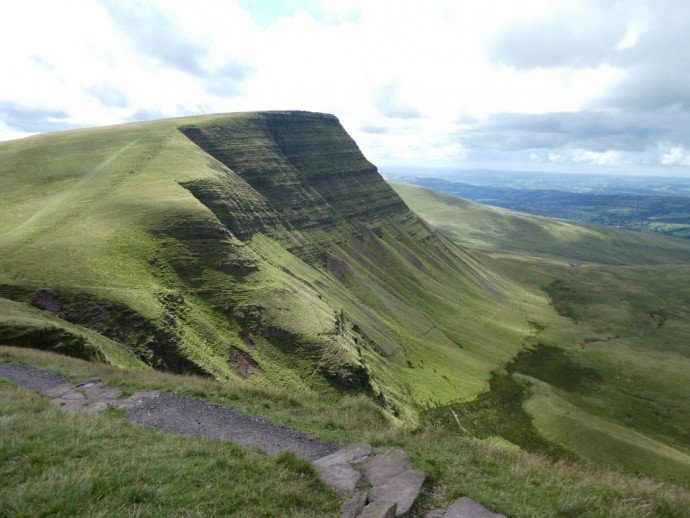 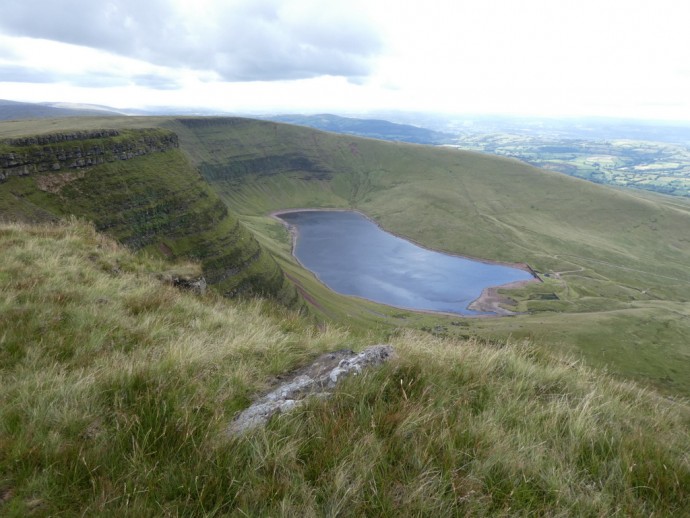 Pic 17 - Halfway between the tops of Waun Lefrith & Picws Du a bit of a kink allows one to see the structure of the edge close up, with the grassy slope of Picws Du in the middle and Fan Foel beyond. 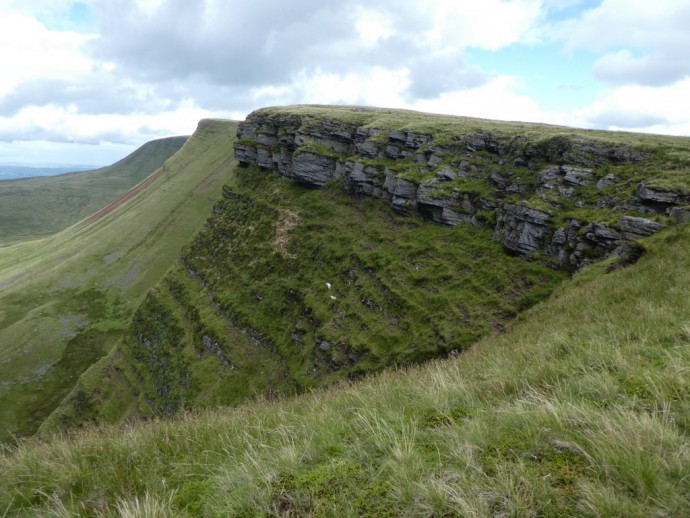 Pic 18 - Having just passed the summit of Waun Lefrith the view back along the escarpment. 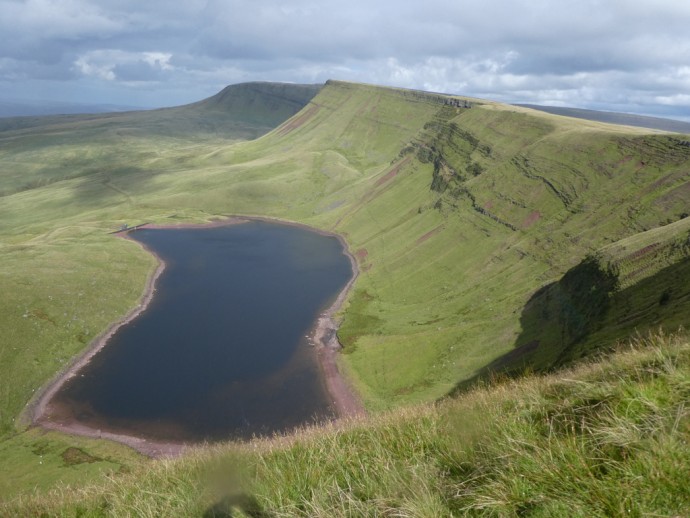 Pic 19 - Going on round above Llyn Y Fan Fach one passes the path that comes directly up from the dam, shortly after I took this panorama of the edge, as the edge bends 90 deg halfway along this is only half its length.

Pic 20 - Having moved on a bit more this is view North, things were also warming up with the lower elevation & the sun. 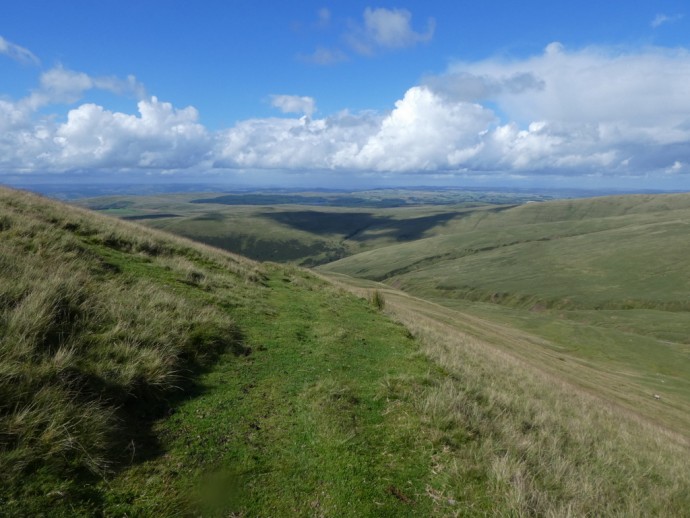 Pic 21 - Dropping down more the bulk of Picws Du and its NW face become even more prominent. 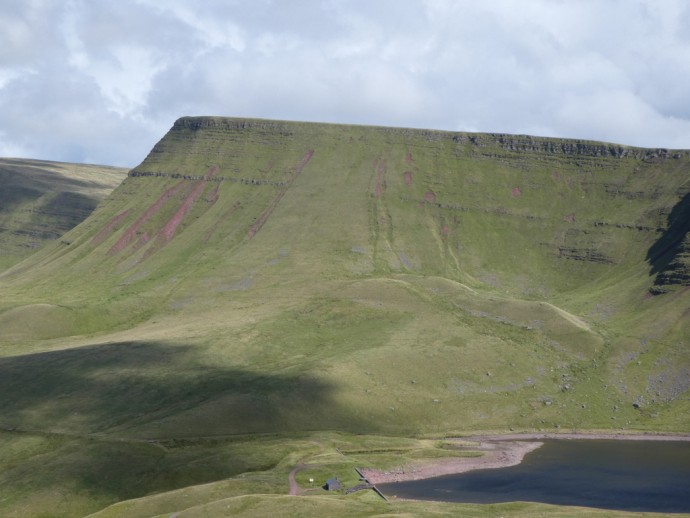 Pic 22 - Nearly back to the car park this bit of track marked on OS maps drops to a ford across the stream but the water level was low enough to use rocks as stepping stones and at only a hundred yards out I would have accepted a wade & boots full of water. If I'd followed the footpath on there is a bridge further downstream, but it would be doing 2 sides of a triangle rather than across the base. The path I started out on heads up the semi unseen valley from the centre of the pic up & right, Nant Melyn is the stream bending left then right from the centre. 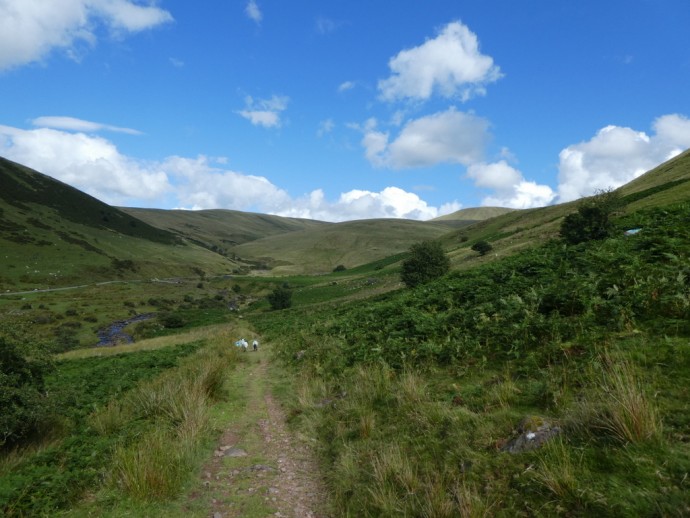 One point to note where the name Bannau Sir Gaer is used in that OS seem to label the escarpment round & including Waun Lefrith & Picws Du as it, where as the WayMaps put only the peak of Picws Du as Bannau Sir Gaer / Picws Du so I have omitted it to avoid confusion.

I hope you enjoy this report as much as I did doing the walk and I would encourage anyone in the region to do this or a shorter version as it truly was spectacular, all I have to do now is walk Pen Y Fan and its neighbours to compare but I think it will take some beating for this type of more hilly than rugged mountain type walk & scene.