With Wales more recently out of lockdown & purposefully taking a day off, plus a new pair of boots ready for a good workout, I was looking for somewhere that would be quite away from many people, so picked upon an area of wilderness in Wales (found later it described as the most extensive one in Wales) but easy going at the same time hence picking the green lane, but the length made it a hard walk. My initial plan had just been to go to the dam & back but upon reaching my vehicle my GPS was reading nearly 19 miles so feeling still fine I couldn't resist adding the drop down to Llyn Egnant to get to the 20 miles & by the end the unit read 20.1 miles

It wasn't the most scenic of places but for me the remoteness & isolation made up for that, the downside that as the track is a green lane one had to put up with some motorcycles & but they seemed to be taking things steady as well as me so they weren't that intrusive. Baring a dog walker at the start it wasn't until I was within about a mile of the dam that I meet any other walkers plus a few more people on the dam who'd drive there from the other side.

Baring a shower when I arrived that continued whilst booting up & having a cupa, it was petering out by time I started so it was rain jacket on only no leggings but it wasn't long before I removed that & fleece later on leaving me with long sleeve top over short sleeve polo & trousers & that's the way I stayed for the whole walk baring my lunch stops when layers were added. It remained dry the rest of the day & overcast with a cool wind when walking into it, it was a bit chilly that I'd could perhaps have adjusted layering, but when sheltered warmed up & as one bended & the hills altered there was quite a frequent swap round.

The only obstacle on the track for walkers was the first ford which looked deep enough to overtop my boots so I deviated upstream to cross just above 2 merging branches, actually looking at the m,ap now it was a large island, coming back I chanced a submerged stone as steeping stone & all went well. One other thing that I came across is that google will stupidly route you along side the reservoir for driving from the west to the dam 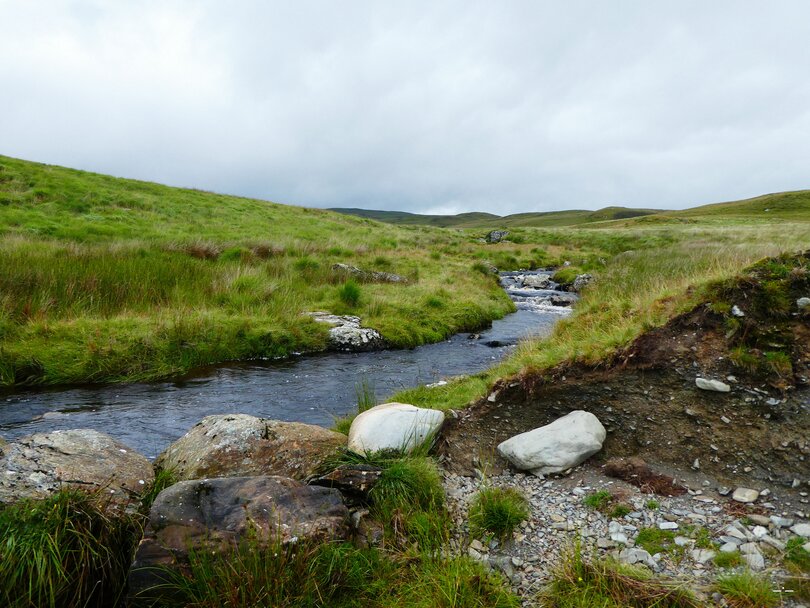 Looking upstream after crossing the ford. 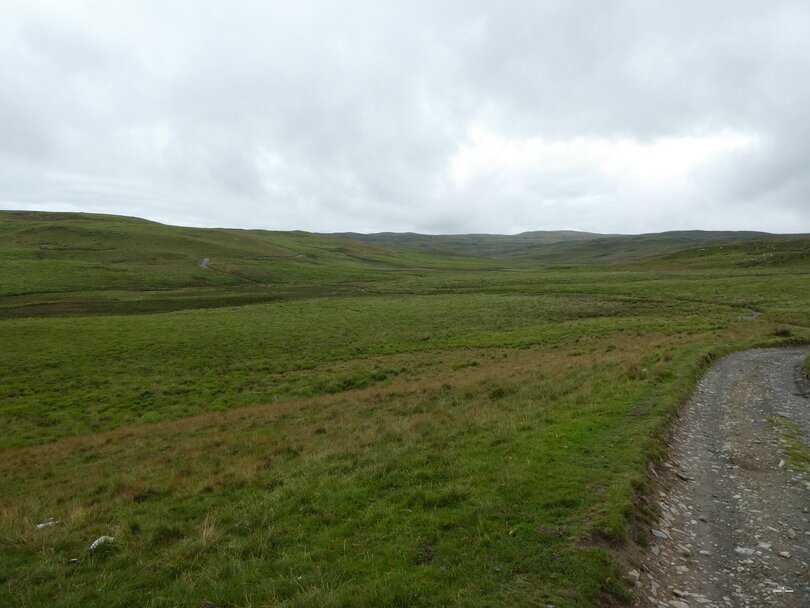 Looking back at the hills at the start that form a major water shed between the Teifi that goes SW into the Irish sea on the West Wales coast vs the Claerwen river which goes into the Wye & generally SE. 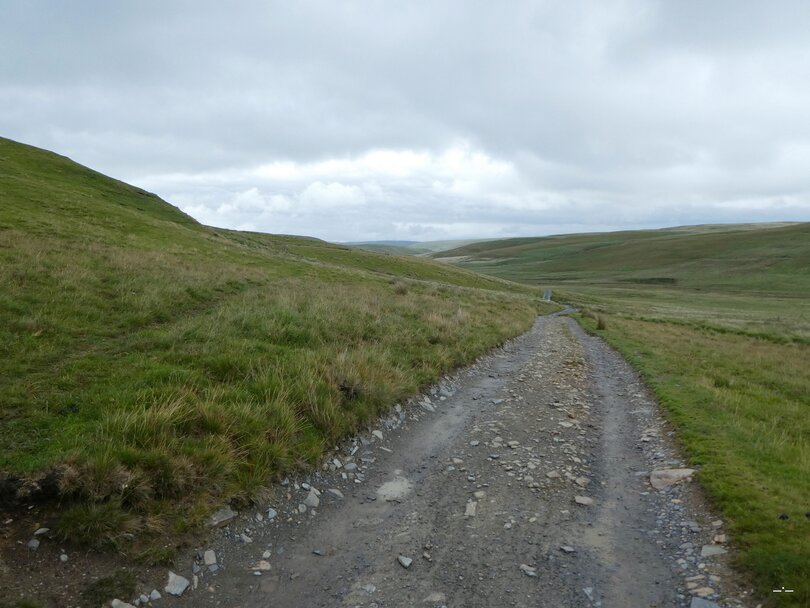 Looking onwards down the valley 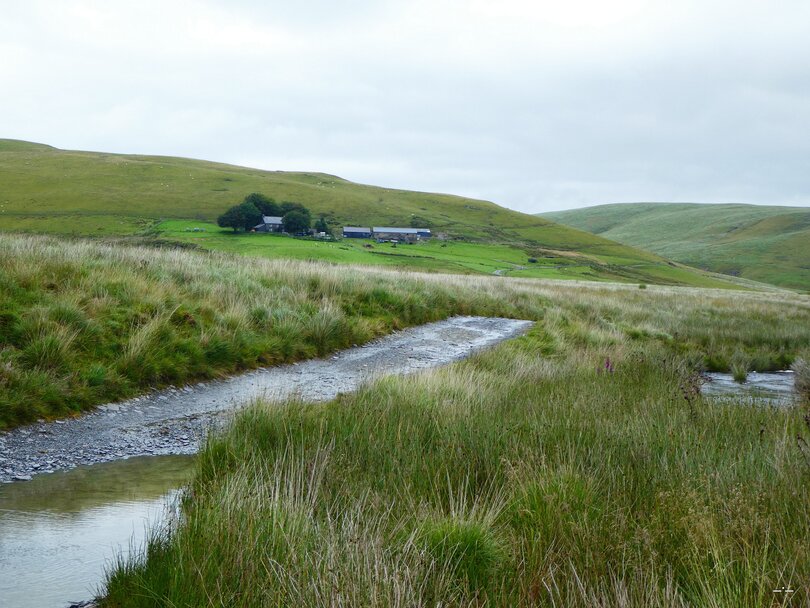 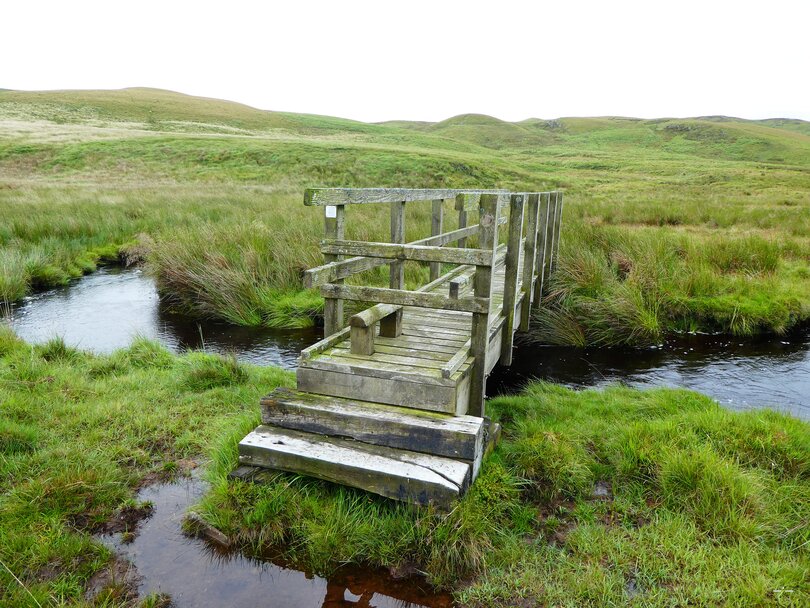 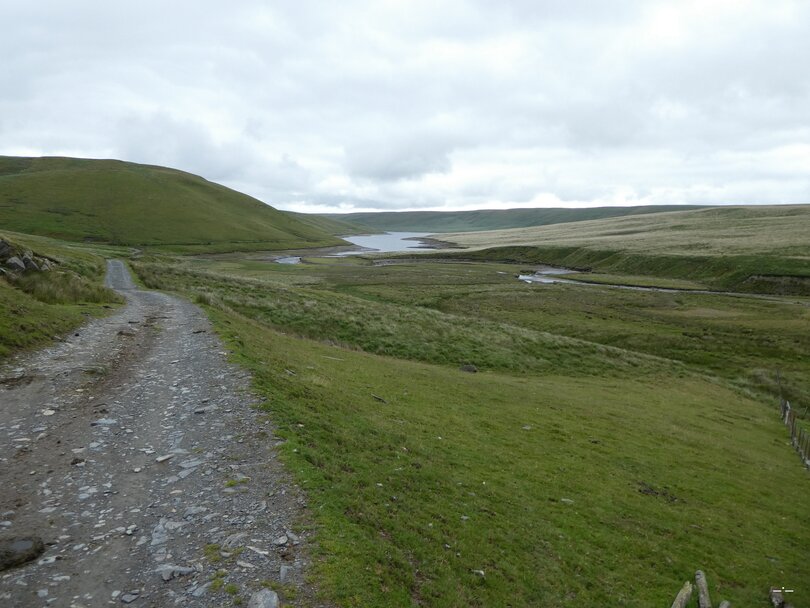 An early on view from the top of the reservoir 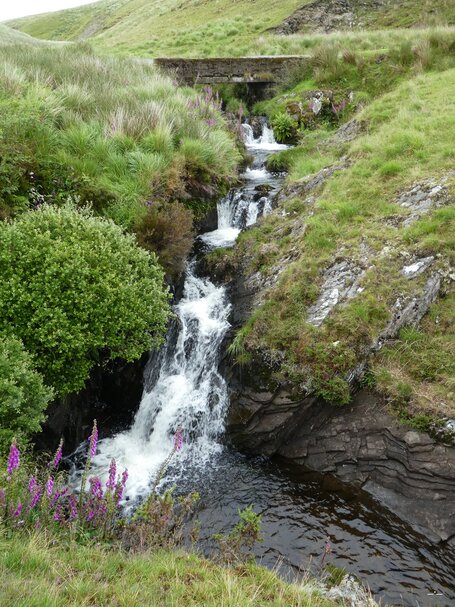 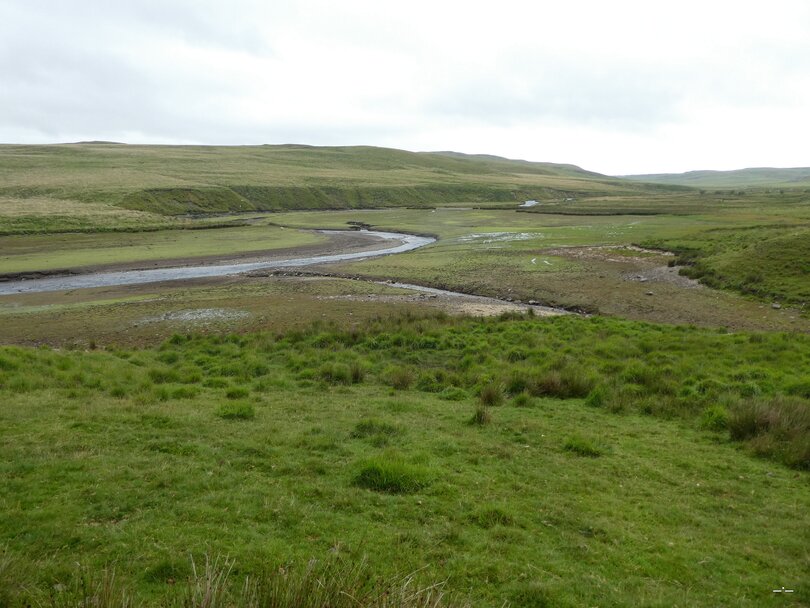 Looking back at what was a flowing river when I was there but would be reservoir water when it's fuller. 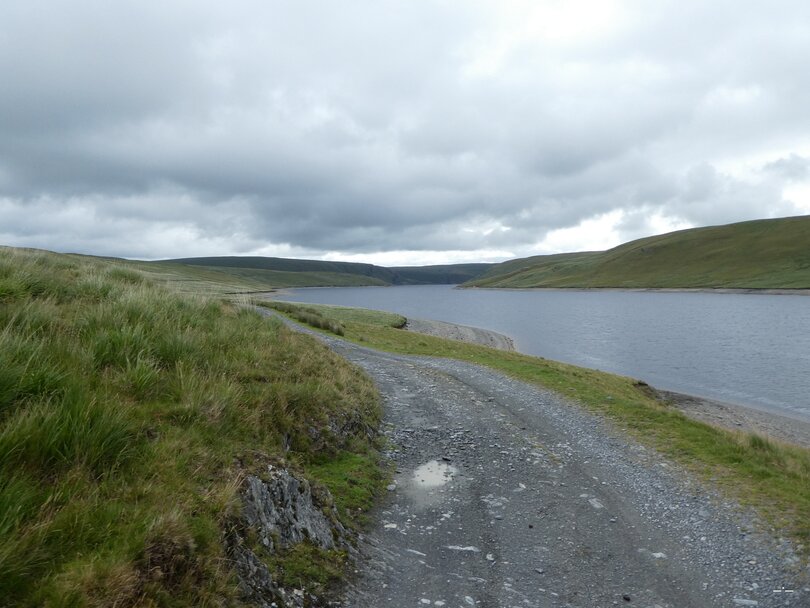 Looking onwards as more of the reservoir came into view & the moody sky, I was on the 1st lump as I thought of it that backs up to Llethr Hir. 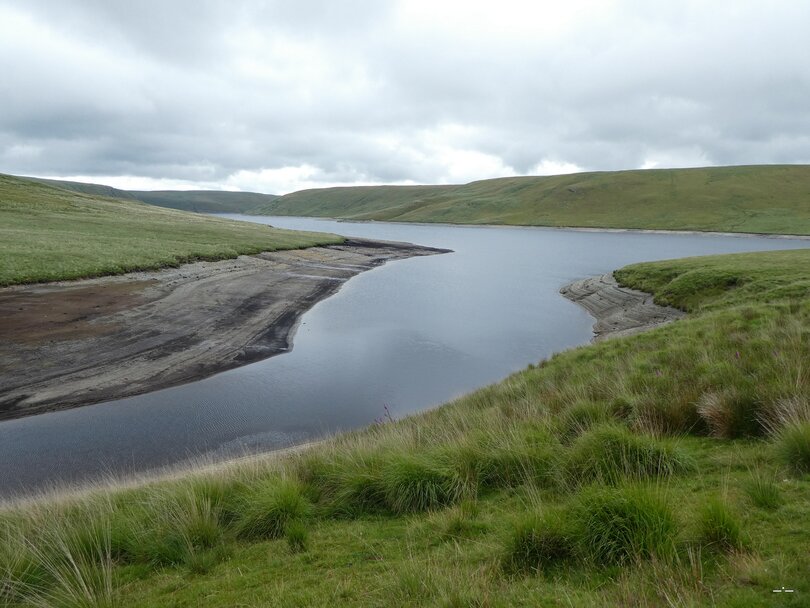 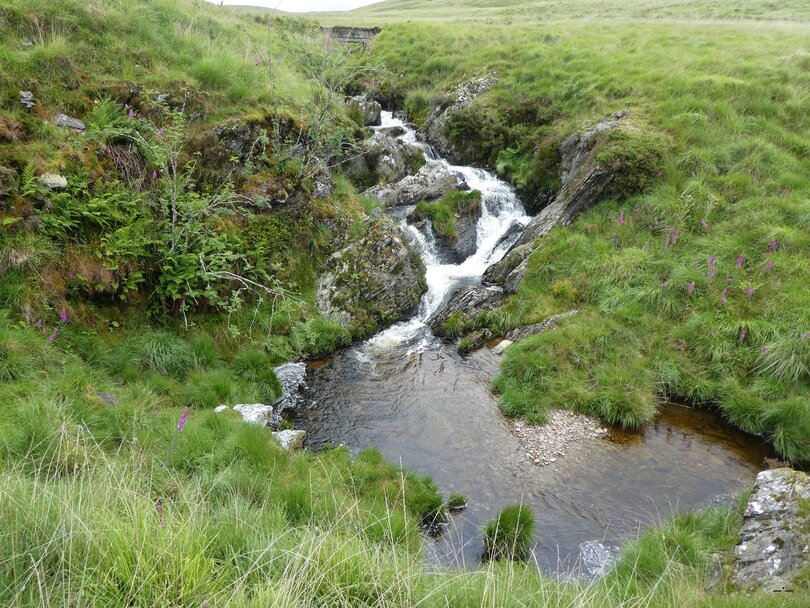 A fall on the Hirnant Claerwen with the bridge the track goes over upstream of it. 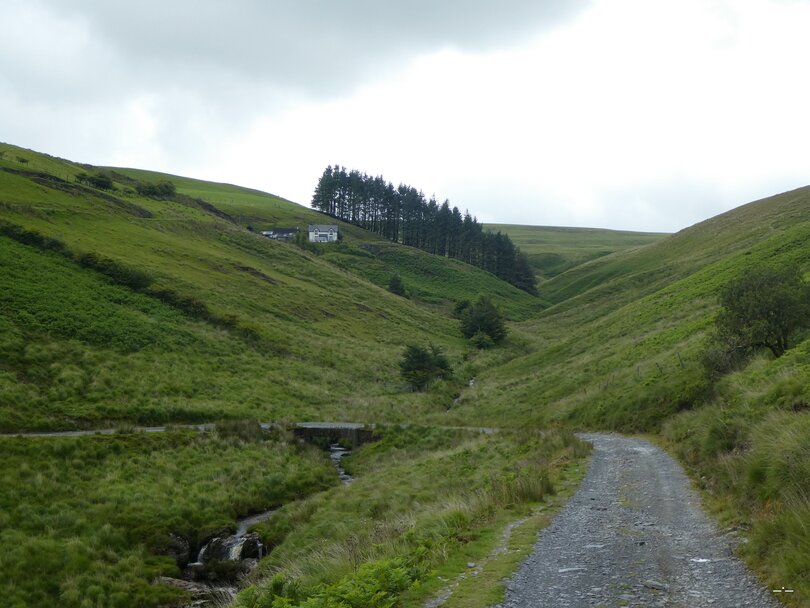 The secluded property of Nantbeddau, not quite as remote as as the farm, but still nearly 4 miles to the nearest surfaced road 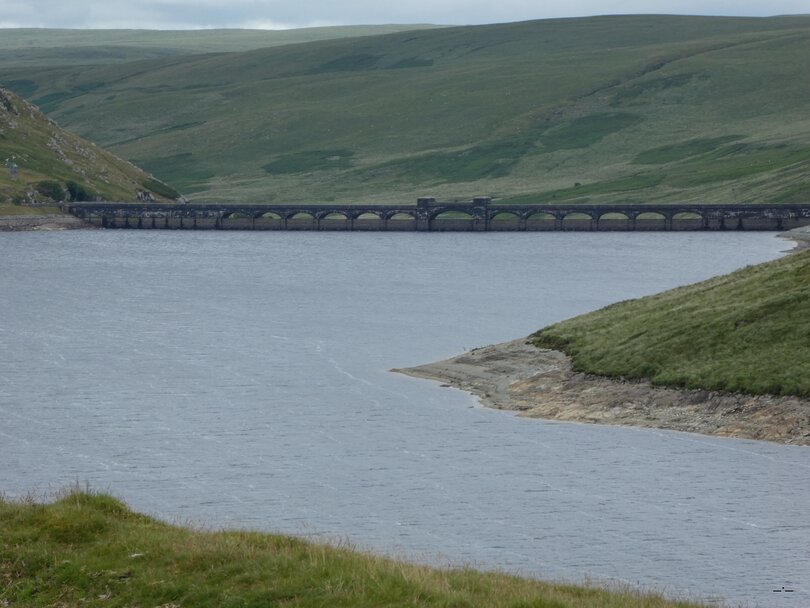 Onto the third lump & a shot of the dam 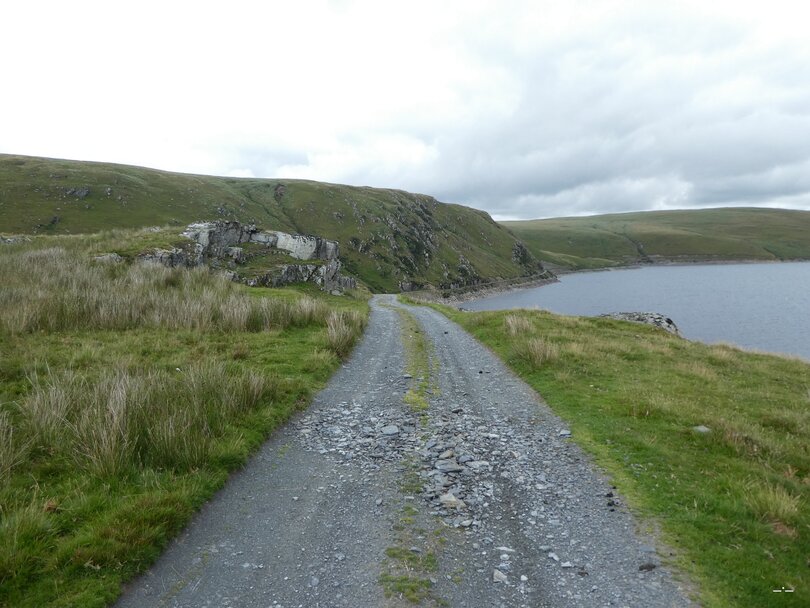 A deceptive pic whilst still on the 3rd lump, in that hidden is the inlet of the Nant Y Gadair & the rock face is on the 4th lump. 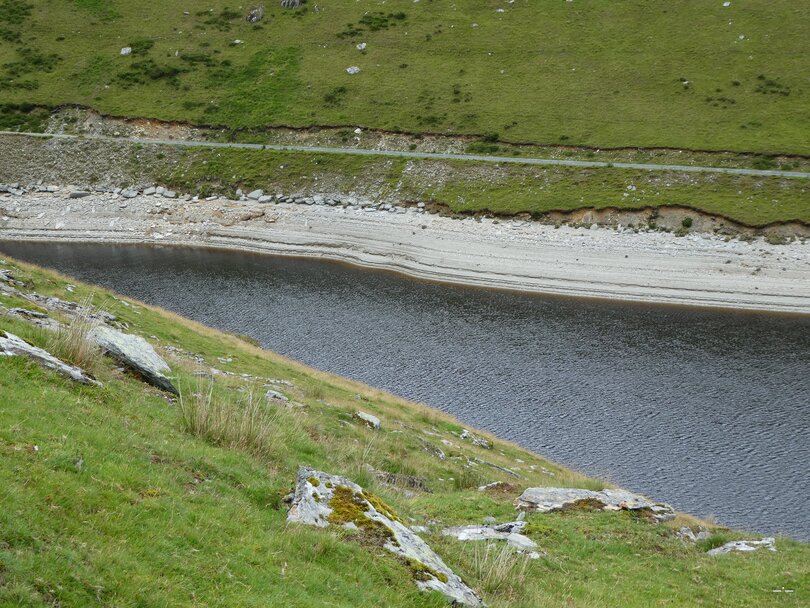 Looking across the submerged bit of the Nant y Gadair valley, the low water level shows the striations in the exposed bed. 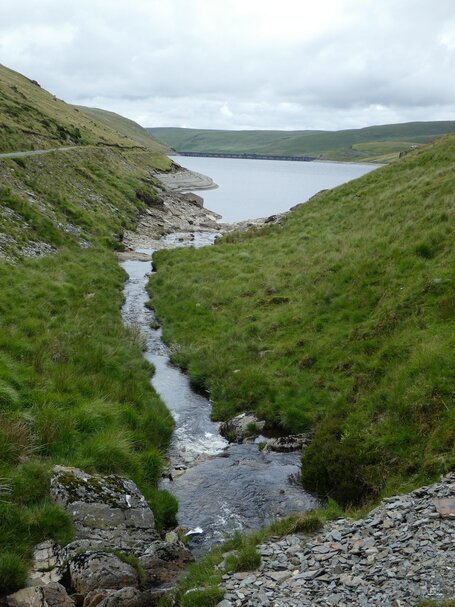 Standing over the piped Nant y Gadair, looking to & over the dam. 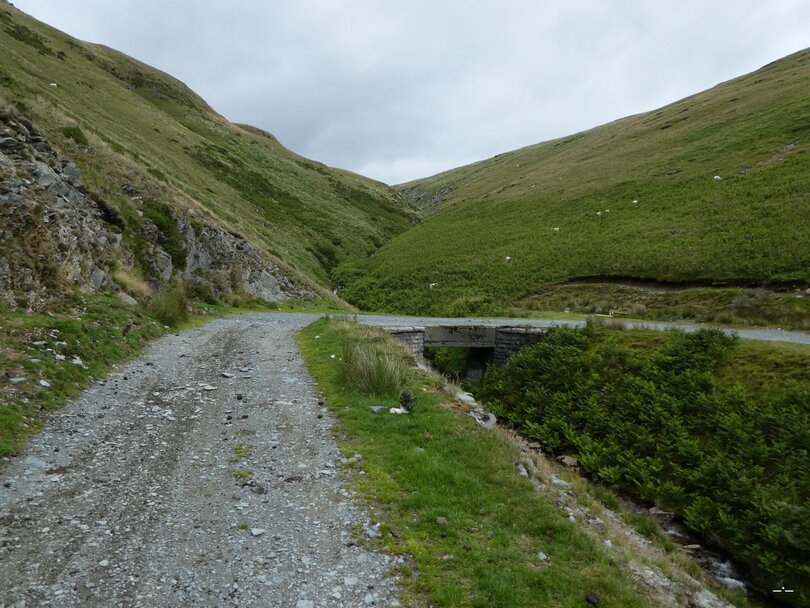 The inlet of the Dyfnant, the last before the dam. 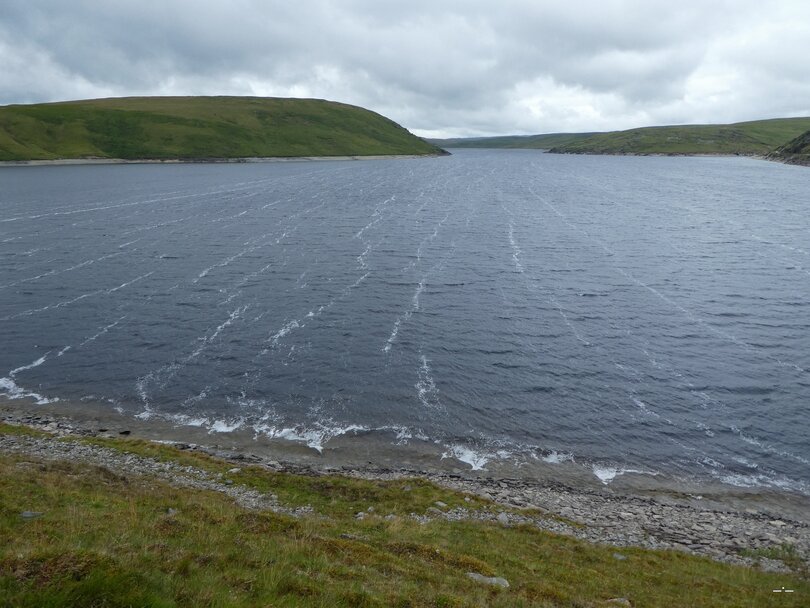 Nearly at the dam & the foam lanes caused by the wind blowing down the long length of the reservoir. 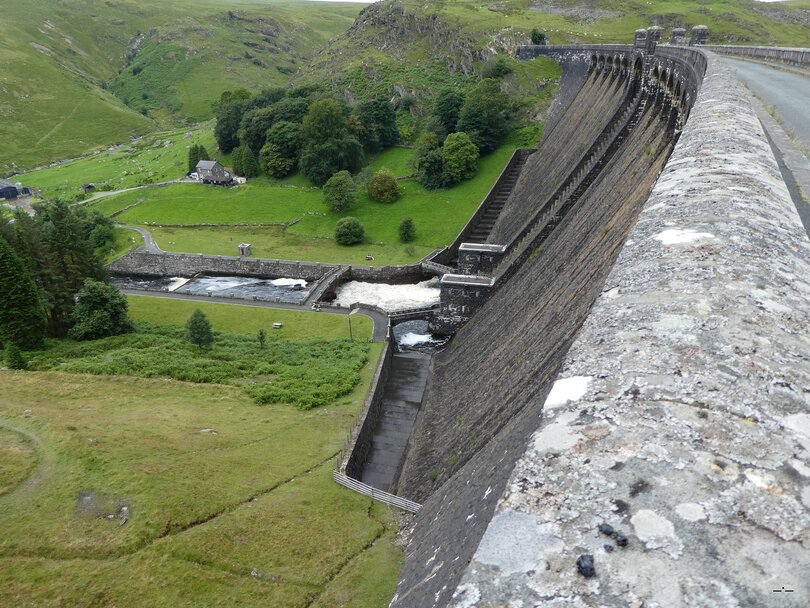 The dam & its curve & the bottom outflow, when down by the outflow it one could feel the power of the water churning as it came out of submege pipe & turned white. 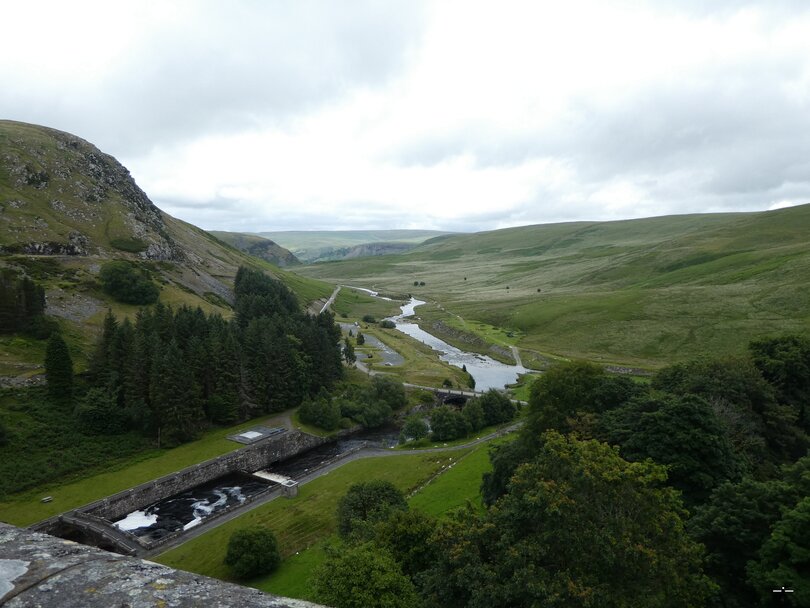 Looking downstream from the dam towards the Elan valley 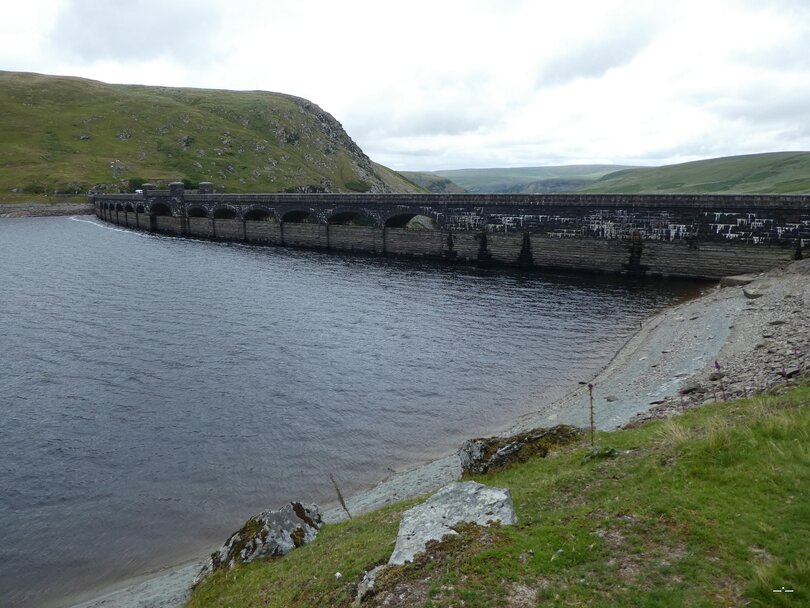 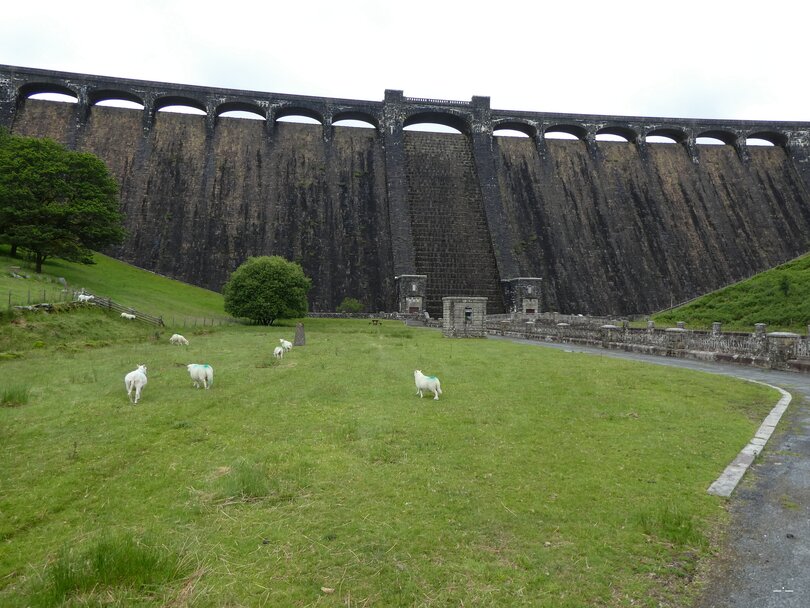 The path down is on the east side of the dam. A plaque on the dam outlines the that it was opened on Thursday 23rd Oct 1952 by her Majesty Queen Elizabeth II, it is a mass concrete one of 240ft max height from foundation to road level & 1166ft long, with facing of brick & masonry, was built between Sept 1946 & Oct 1952, forms a reservoir 4 miles long with a top water area of 650 acres at 1210ft above OS datum & holds 10,625 Million gallons of water, it used 700, 000 tons of material.
It was built to supply water to Birmingham (a sore point among some Welsh) & now does some local supply as well as South Wales in times of shortage. 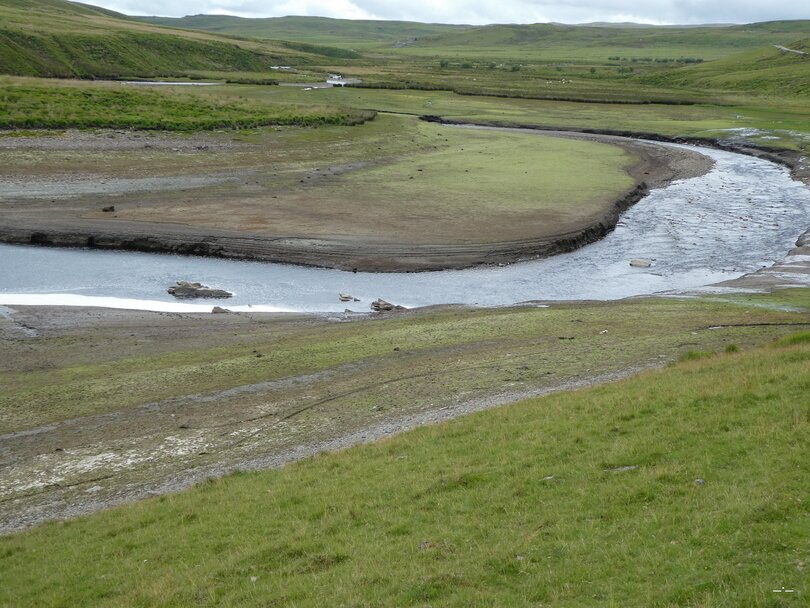 On the backward leg looking where the flowing river transitions into stationary reservoir & the low water level where the river exposing the bed at the furthest reaches of the reservoir. 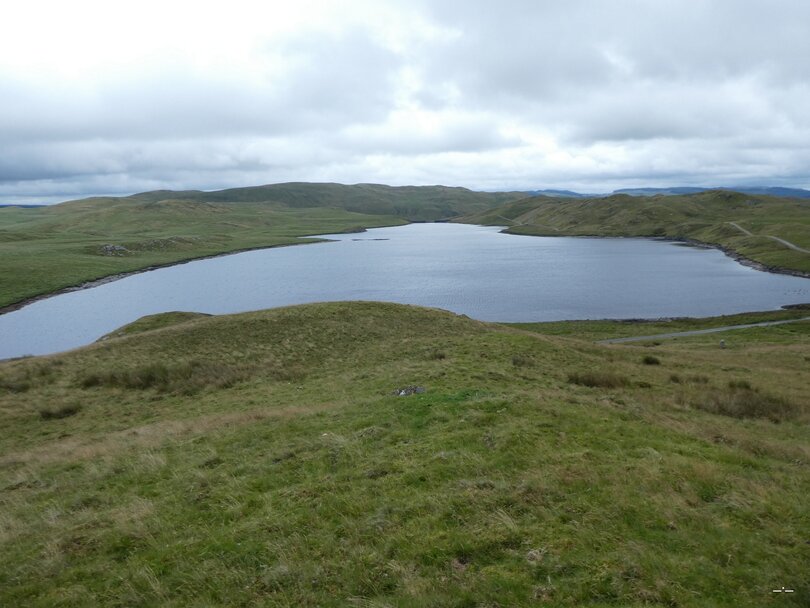 Looking roughly SSW from a mound over the waters of Llyn Egnant, that forms part of the cluster of natural lakes & reservoirs known as the Teifi Pools