Having the previous week done the bit West of the minor road (Brecon Beacons part 1) this time it was East of it. As usual for me it was a early start and the forecast was for a sunny day with excellent visibility but a cold wind, but catching a forecast on the radio on my drive there I heard about cloud on the hills & so it turned out when I arrived at the same parking spot as before above the Devils Elbow. I had been wondering with such a long walk whether to do the road new & Roman part 1st or last with the option to skip, but with cloud still on the tops when I set off but decreasing it seemed obvious to give it as much time as possible so it came 1st.

Pic 1 Nearing where I turned off the track/Roman road coming back looking W to Fan Nedd (with cloud) &Yr Allt (without) that I'd been on the last week. 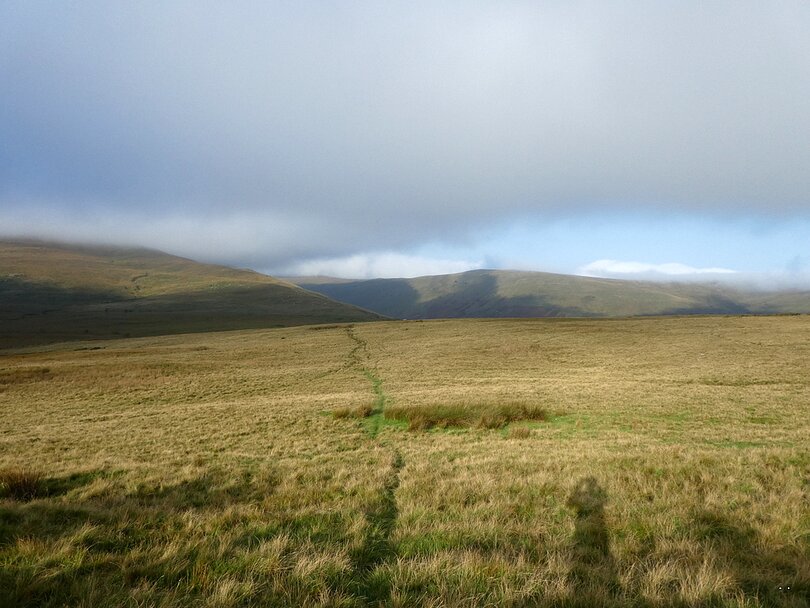 Pic 2 Having moved on some & still on the old Roman Road of Sarn Helen but stepping back of it for a better pic the Nant Ystwyth drops away, but Fan Bwlch Chwyth still with cloud on probably due to being higher than it's lesser neighbour Yr Allt. 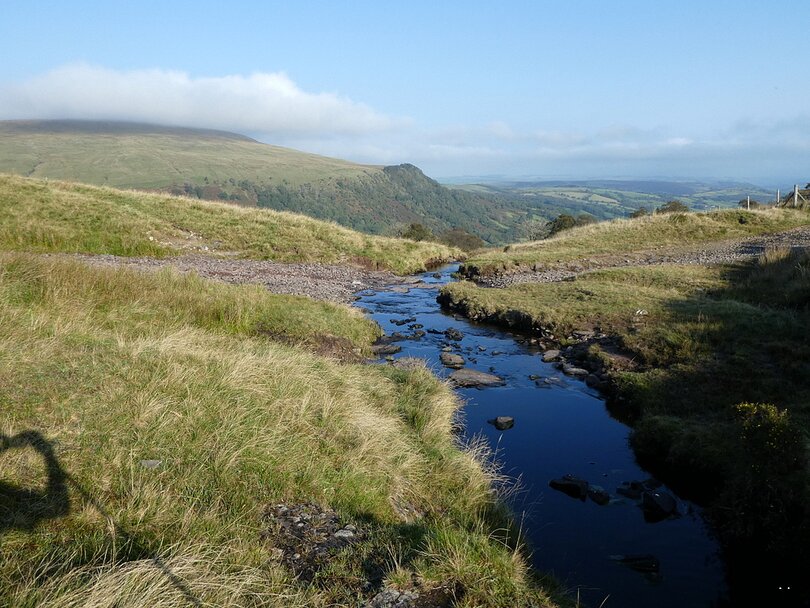 Pic 3 About 1/4mile before leaving the "road" looking back up the Senni valley. Having reached the point where Sarn Helen starts to drop I turned off uphill on a steep grass slope & past modern sheepfold semi on path then off to hit the ridge line of Fan Llia further N than the more normal path.

Pic 4 About 3/4mile from Fan Llia's summit looking back along the broad very gently sloping ridge that was dry & peaty when I was on it. 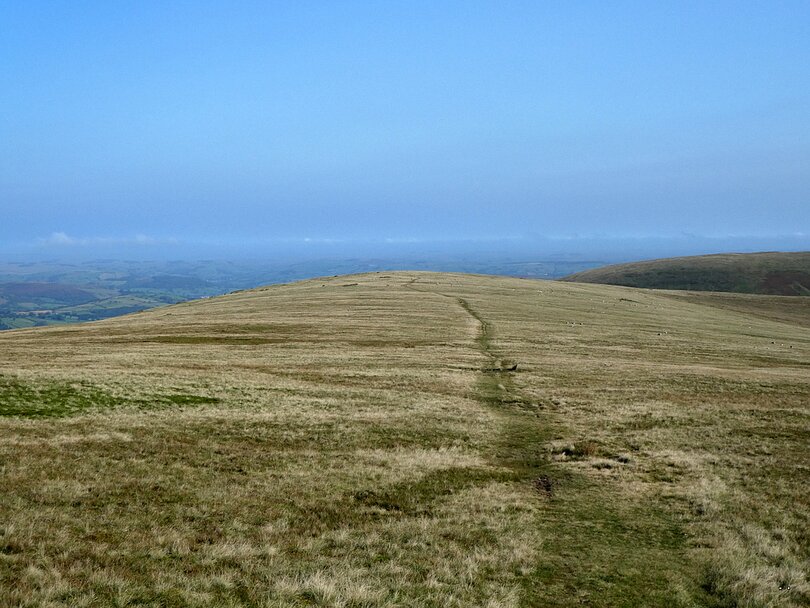 Pic 6 Blink & you've missed it, the summit of Fan Llia marked by a few stones & Fan Fawr beyond with its connection to the ridge I was on disappearing left & Corn Ddu the highest top in far distance. Since I was heading E across the top of the forestry that sits across the bottom ½ of the ridge end I bent left a bit as I started to descend onto minor paths, leaving the major path that is the Beacons Way that runs along where I'd just walked bending W a bit

Pic 7 Halfway down to the forestry looking SW across to where I'd come round the previous week on the track that is also Sarn Helen, with the view over the cleared but dead forestry. Having gone on & bent E & headed towards the Afon Dingarth I'd reached path end even on WayMaps where I'd sussed on satellite view a great area of rush, but that had looked grassy if I went more N but seeing a track I picked it even though it headed S but it just went to a gate to a grass field that was outside the access lad so I doubled back to my original plan & picked my way off path to above the river. Heading to the river & the steep drop up from it was mirrored down to it, & having seen what I guessed were sheepfold's old & new marked on OS maps & on satellite images I thought it was a likely crossing point as they wouldn't put them somewhere they couldn't drive the sheep into.

Pic 8 My crossing point was down a very step grass bank, a slight wander & then fairly easy crossing of the river, but it had been dry for over a week, to the old sheepfold you can just make out, down left from the new & my route onwards up & left from the new. Pic 9 Just at the top of the final slope to the river the view downstream, where there is a bridge but would have added 3/4mile and it's there for a path heading up from the S and you have to squeeze thro' between the river & private land on the W bank. 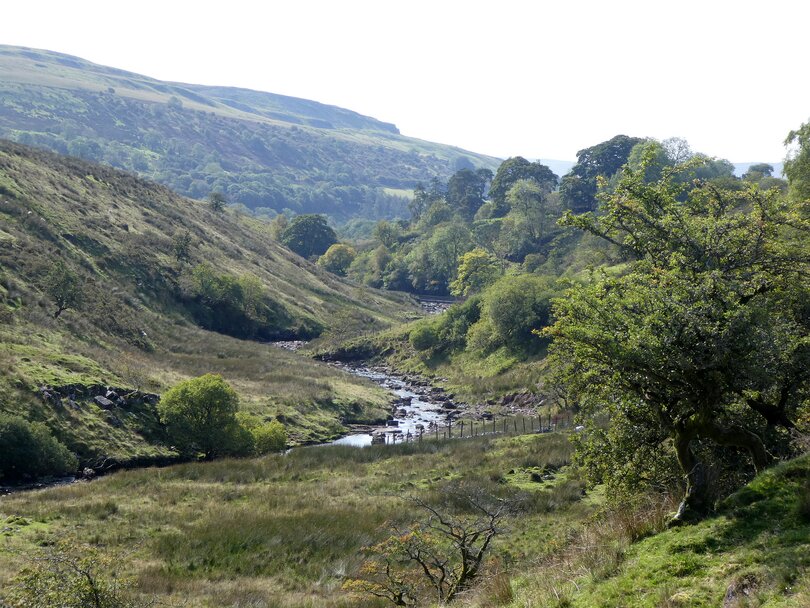 From the new sheepfold it was just a case of picking ones own way on sheep tracks some of the time but they do tend to follow the contours where I was after some upward movement as well to get more above all the water courses forming lines coming down to the river.

Pic 10 Heading onto more ridge than side slope the view round the top of Cwm Dingarth. 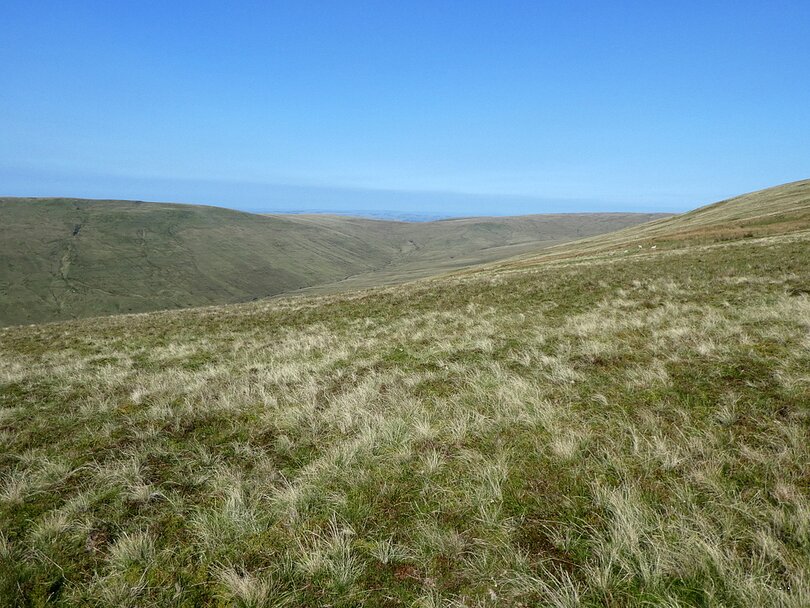 Pic 11 Same place but it doesn't really matter where this is, as it's for those who aren't used to off path walking to see if you can pick out the sheep track that runs up the centre, as they tend to avoid walking thro' the worst spots so it's easier & better to follow their tracks. It's also a case where navigating by GPS helps. 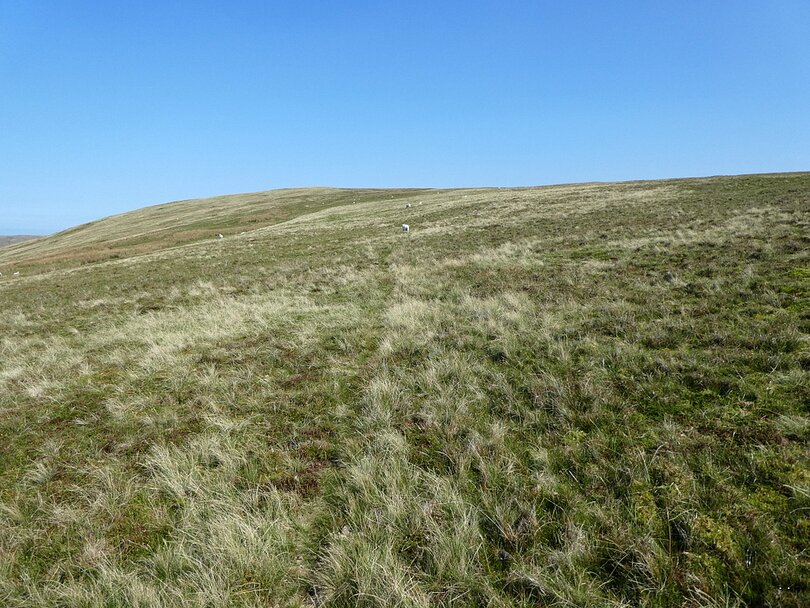 Pic 12 The trig pillar with Y Ddraig Goch (The Red Dragon in Welsh) on it at the SW corner of Fan Fawr summit plateau with the hill ridge lines going up the left side of Fan Llia, Fan Nedd over the top of the trig pillar, up & left a bit Fan Gyhirch with it's escarpment in shadow & left a bit & very back the escarpment of The Black Mountain 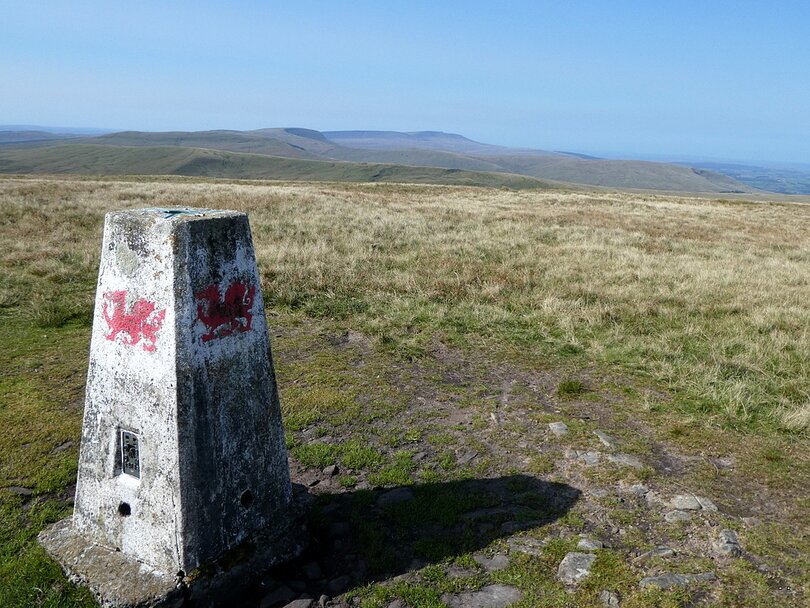 Pic 13 Approaching the summit of Fan Fawr, not the cairn but a bit of higher ground 6m WNW of it. With the obvious lump of Corn Ddu sticking into nice blue sky. 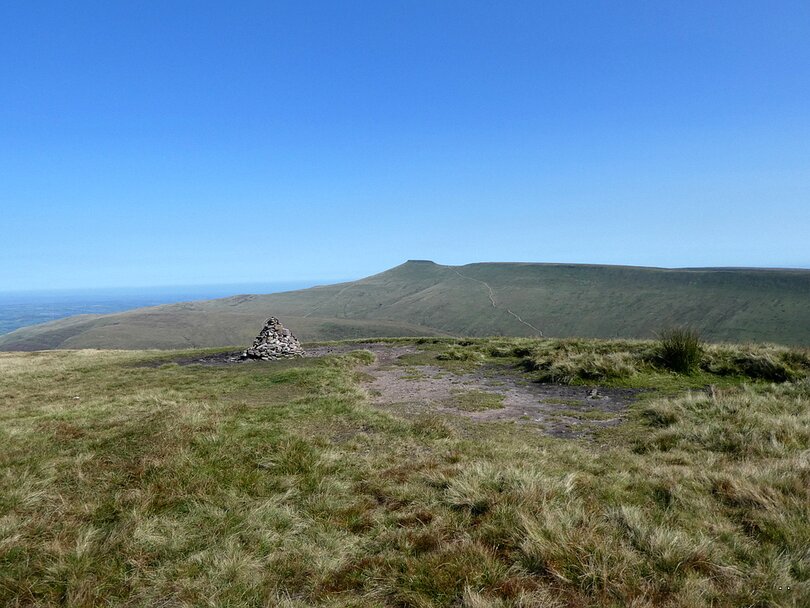 It was also approaching this summit I saw at a distance the first people of the day, 9 miles in shows how quite it was. Having wandered round the summit area & cast a eye across to what must be the M25 of tracks going up Pen Y Fan & in one of my pics taken with zoom I counted about 15 people , more than I saw all day. From the summit was a steep drop down to the Beacons way path because I wanted to follow the edge round above the A470 to Craig Cerrig Gleisaid for hopefully when planned & indeed better views, although I did get traffic noise.

Pic 15 Looking back at Fan Fawr from the Beacons way path, I'd come down the ridge line heading left in the pic. 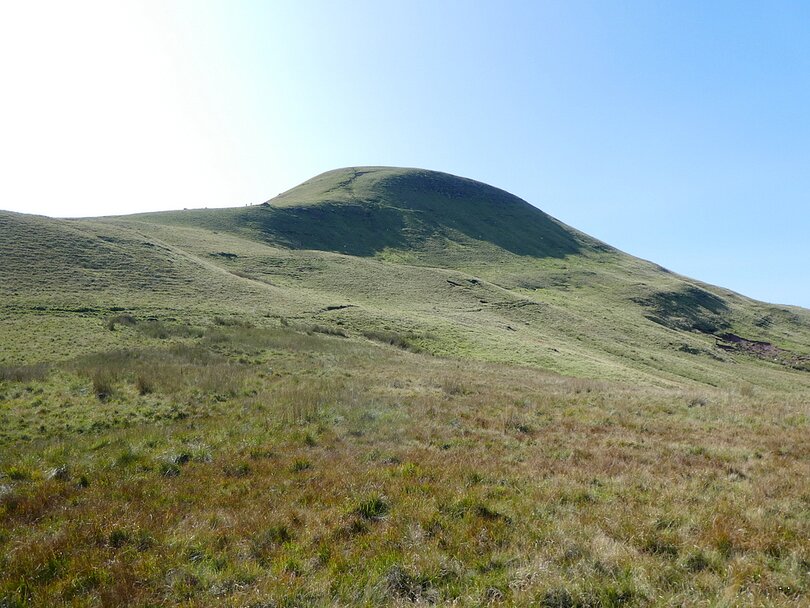 Pic 16 The path ahead in the region of Craig Y Fro an interesting stretch with bleak hilly grassland to my left & valley to my right with odd little stream to step across or over. 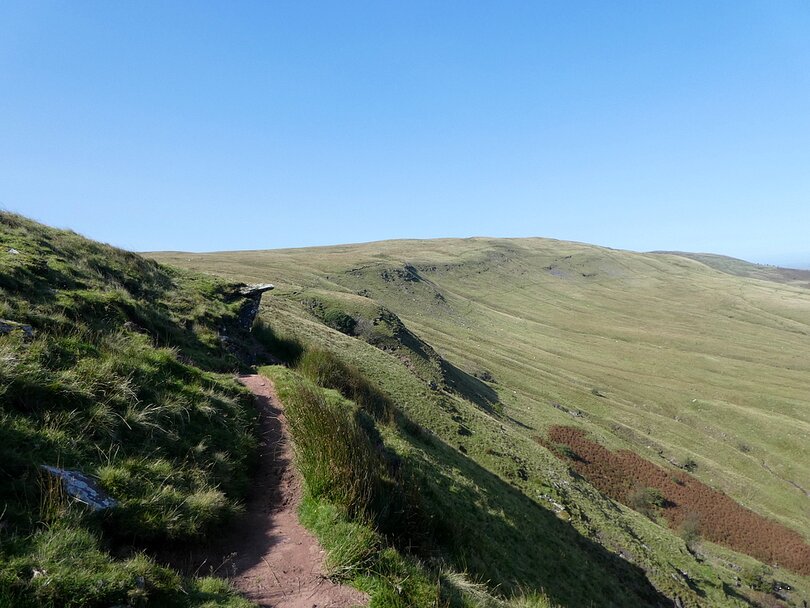 Pic 17 Nearing the high point of Craig Cerrig Gleisaid & looking back along its edge over to Pen Y Fan & Corn Ddu. The pic was taken over the fence as there was no stile to cross onto the edge path. Pic 18 Having dropped to the col between Craig Cerrig Gleisaid & the almost island of Fan Frynych looking back at it & the animals around.

Pic 19 Near the NW end of Fan Frynych where an old tramway came up from the E & the two end slopes that form the NW corner of the Pen Y Fan massif. Pic 20 Back at the col & I purposefully walked to the boggy end of the small pool that's marked on OS maps & buy now you'll know the peaks, the left is the higher. Pic 21 Back on the Beacons way and you'll now understand why I used the description of an island as the right side of Cwm-du is the slope of Fan Frynych & the left Craig Cwm-du leading in to Cwm Senni. Pic 22 Having descended the steep slope that I'd gone up over 5hrs earlier to the Roman Road again & by 5pm and the sun is hiding itself behind the hills, the view across to Fan Nedd. 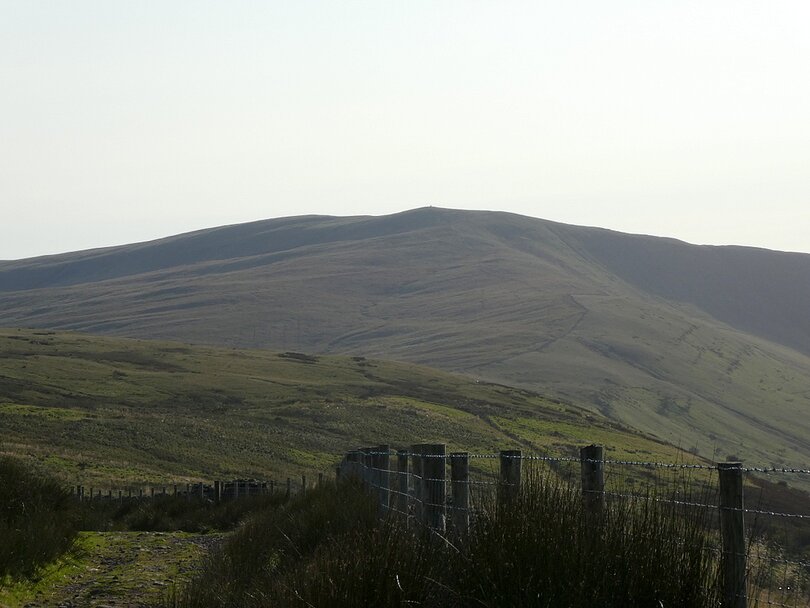