The Black Mountain from the West & back on the Beacons Way

This walk was back in Sept & was a semi out & back as I couldn't find a suitable way to get a round, so instead picked 2 paths that semi parallel each other one on the side slope that I used on the outward leg the other over the tops my backwards leg that is part of the Beacons Way. My initial plan had been for an even bigger walk in that from Carreg Y Ogof I was going to head N on the path to the boundary of the access land before cutting off path NE across to the track that goes from where the road ends to Llyn Y Fan Fach & then up onto the edge. But feeling the effects of fatigue from working for a neighbour into the previous evening & the heat of the day I cut across from directly from Carreg Y Ogof to the escarpment to shorten the size, whilst still going up Picus Du for the views that I knew were there.

As ever it was an early start arriving not long after sunrise at the car park at the Mountain Road Viewpoint / The Black Mountain Quarries to give time for a big walk with a couple of hours spare before dark again, starting in short sleeve polo that I prefer over T shirts for the collar that can add a bit of wind protection at times & sun on neck protection at others & long trousers that got rolled up half way through - I don't care if it looks funny, it's practical & does help cooling, plus my packable baseball cap, that although it was cooler without it on it provided sun protection on my head & shade for my eyes. The outward leg wasn't the most scenic but it did have a remoteness feeling to make up for it but the low early morning sun gave some nice shots in the quarries. Before moving on out into the wilds as I thought of it. 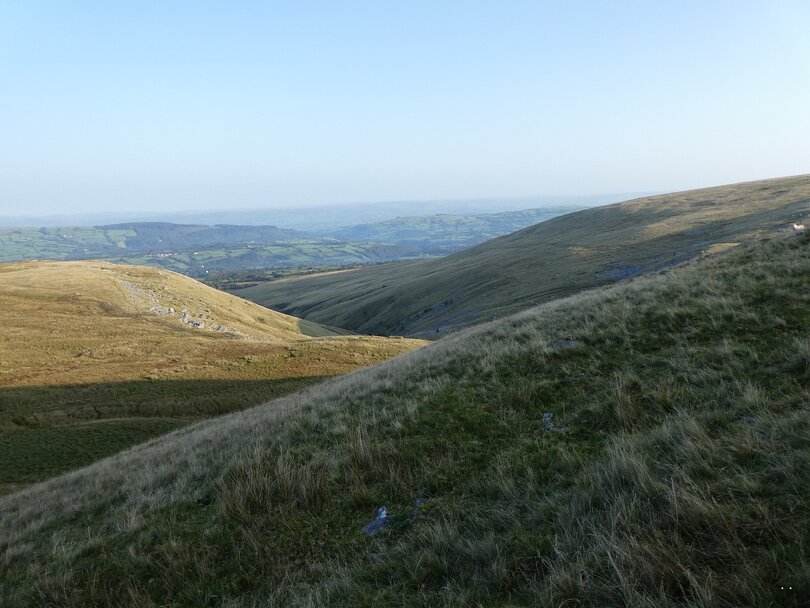 Looking out along the Clydach valley My way ahead, in the pic right of the stream but below the bench Looking back where I'd come on the side slope & where I'd be going over the top on my way back Feol Fraith. Carreg Cennin Castle – with maxed out zoom & pic crop, it wasn't visible to the naked eye unless you new it was there. Another backwards looking shot with Foel Fraith & Moel Gornach (and just to confuse everyone Foel & Moel are the same word, the Welsh language mutates the beginning of some words) in the distance Looking towards the hill top of Carreg Yr Ogof with it's trig pillar the little white speck. From the top of Carreg Yr Ogof looking NE to Myndd Epynt in the far far distance. same place looking SW, the outcropping of limestone gave it more of a mountainous feel than my walks earlier in that month even though they went higher.

Having dipped down & crossed a peaty area that was thankfully dryish I then ascended the backside of the Northern escarpment of the mountain, to meet plenty of people doing the most scenic bit of the mountain. The Northern escarpment with Llyn Y Fan Fach below Looking back towards where the previous pic was taken

Having reached the heigh point of Picus Du & turned back & recrossed the lower peaty bit, I headed back towards Carreg Yr Ogof but skirted round below it's summit to join the Beacons Way path which I followed virtually all the way back. Still on Garreg Las which has large outcroppings of limestone including the pavement upon which this cairn sat, looking East-ish. More of the outcropping limestone on Garreg Las looking to Cefyn Cylchau, on the Beacons Way shortly before it turns West The summit of Moel Gornach/Garraeg Lwyd with it's ancient & massive cairn, I'd passed 2 similar on Garreg Las, with recent rock tower & trig pillar that I was sitting on whilst having a chat to a bloke I'd passed whilst by the escarpment edge, he initially thought I'd cheated & driven round till I explained I was actually nearing the end of a long day, but he had driven round but was walking onwards then back on the sheep type tracks I'd gone out on. It was by my striking aqua coloured cap he recognised me & I him by the shirt tied over his shoulders. Back at the quarries but looking down from the top this time.

Having got back to my vehicle I then capped of the day with picnic tea sitting out the back of it looking out at the view, but whereas I can live with the atmosphere of the plenty of people about chatting & generally enjoying things, the nearby car sitting there with engine running & music thumping did spoil things for me.