This was another walk back in Sept on a nice glorious sunny day and having done some mountains earlier in the month I decided a trip to the seaside was in order, but since this is a walk report you can guess that I didn't laze round on a beech. Having previously visited & done odd small walks on bits of this section I new that it was a very varied section with a few streams coming down to the sea between the hills so that it would have some ups & downs.

The route was to follow the part of the Wales / Ceredigion coast path between Llangrannog & New Quay then back again by the same way. The path was well signed and bar 1 small ford all notable streams were bridged, although most of it was dry there were the odd wet bits & the brush was so much at one point formed a tunnel. Plus of course at any stage I could look at the map & know that my height was the height I'd walked up.

Arriving early & I parked in the free top car park (marked on OS maps) in the village of Llangrannog & then it was a half mile road walk to the sea front on the very narrow road, passing just about on the way the church of St. Crannog from which the village gets it's name (the Llan part means the area or grounds around the church in welsh), plus a partially hidden from view but sounding good a waterfall on the Nant Hawen. Reaching the beach it was a right turn along the front to then head up some steps to get one up on top of the cliff. 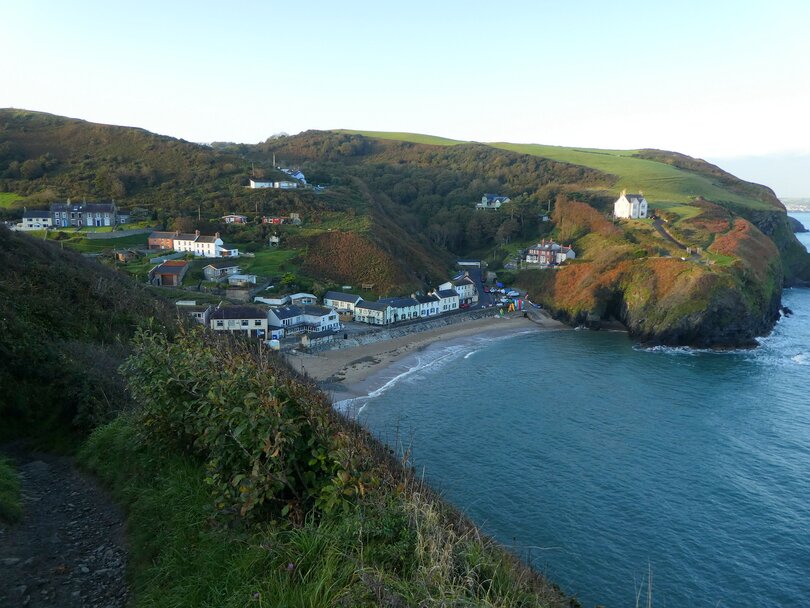 Looking back at Llangrannog, only about 2/3 of the beach is visible. 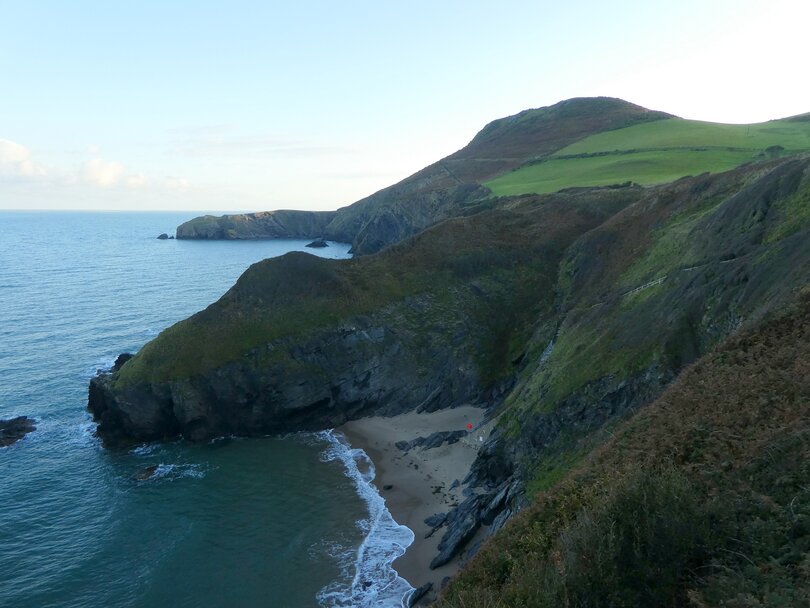 Looking onwards, with Cilborth beach below, at low tide one can get round or you can head on the way I was going & use the steps which are the zig zag up the cliff face in the pic. The hill sticking up is Pen Y Badell which has an iron age hill fort called Pendinas Lochtyn on top as well as an MOD building. Below it going out to sea is Ynys Lochtyn (an island). 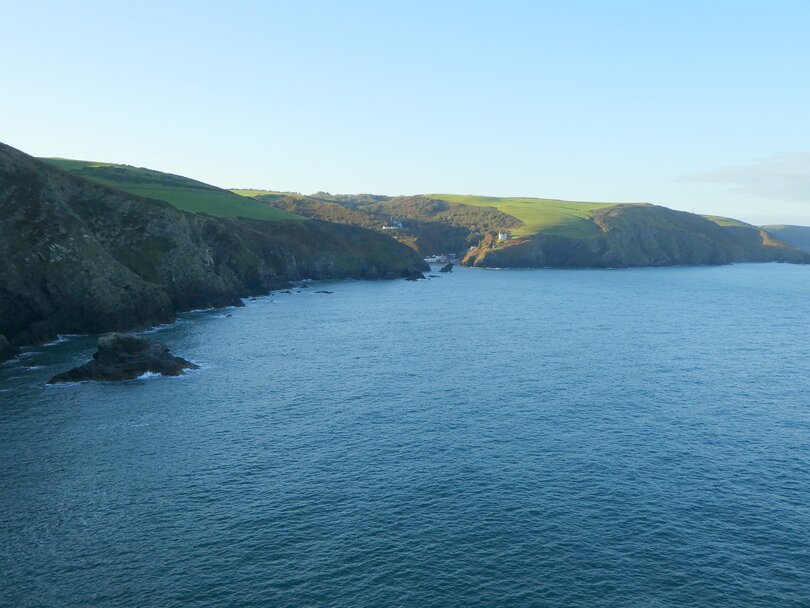 Having reached the Lochtyn promontory & standing on it's left arm looking back SW to the inlet of Llangrannog & showing how much it's cut back in a notch in the coast. 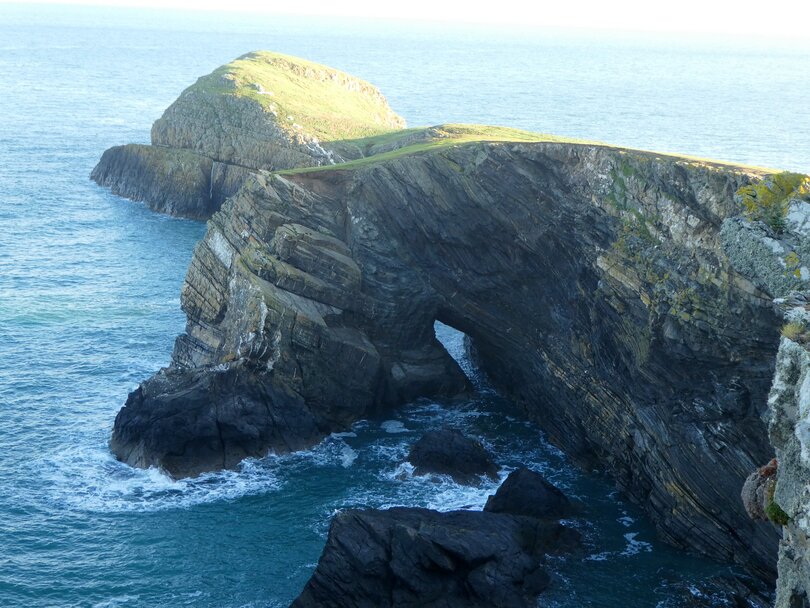 The sea arch on the left hand tip of the promontory & Ynys Lochtyn the island that looks joined in the pic. 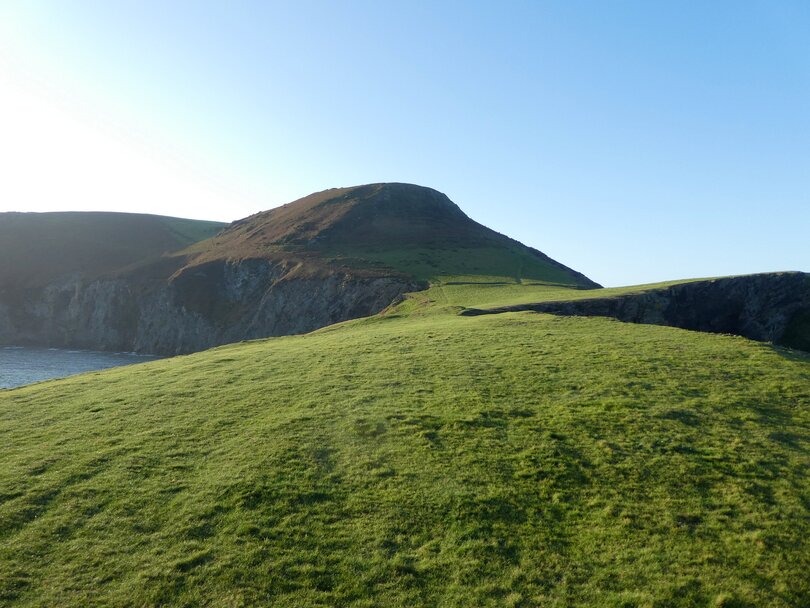 Standing on the end of the just attached land looking up to Pendinas Lochtyn, there was a sort of path / scramble down the right hand side that if ones brave and the tide is out would allow one to cross to Ynys Lochtyn, but with tide in & loaded rucksack on my back I took the sensible option & skipped it. 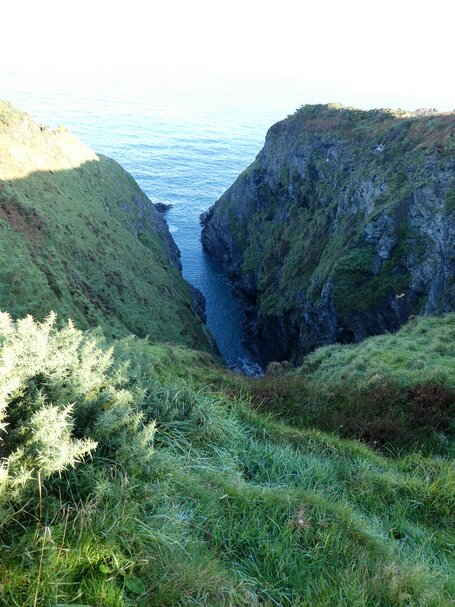 1 mile on as the crow files from Pen Y Badell/Pendinas Lochtyn a slash into the land, I was also now onto a section that was only opened in 2005 so said a plaque on a stone I'd passed. 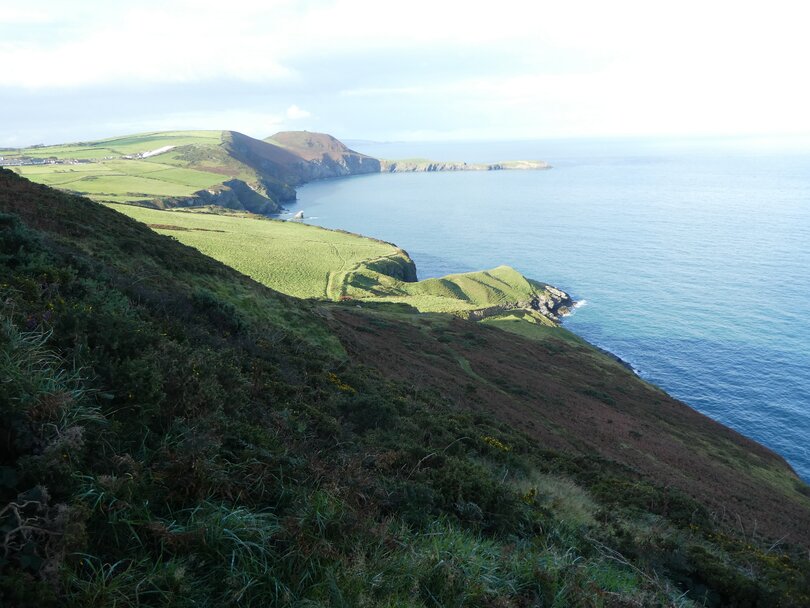 This was taken ½ way up a zig zag that's not marked on most maps yet (more on it later) in the region of Erwan Fach on maps, the path at this stage is cut into the very steep slope between the fields above & cliffs below. 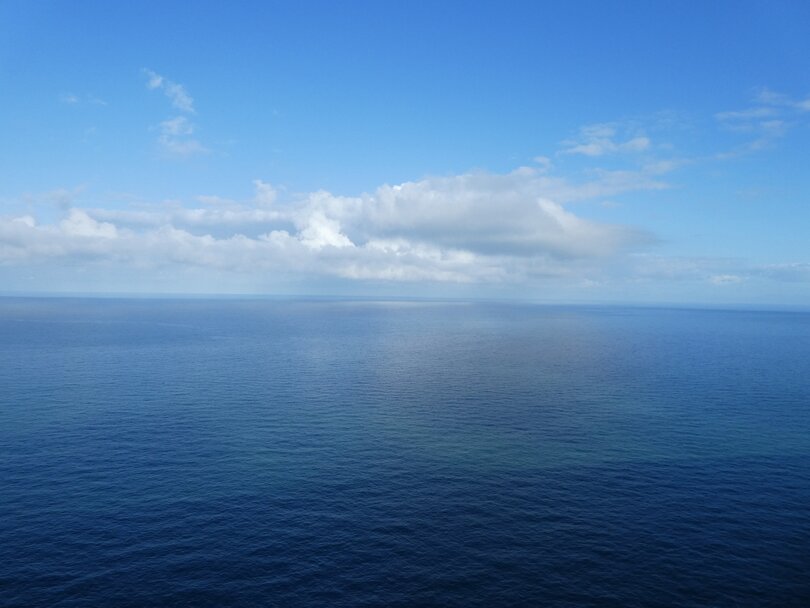 Blue sky over blue sea & if you think that's possibly land on the horizon it's not, as Ireland is the next land & it's to far away. 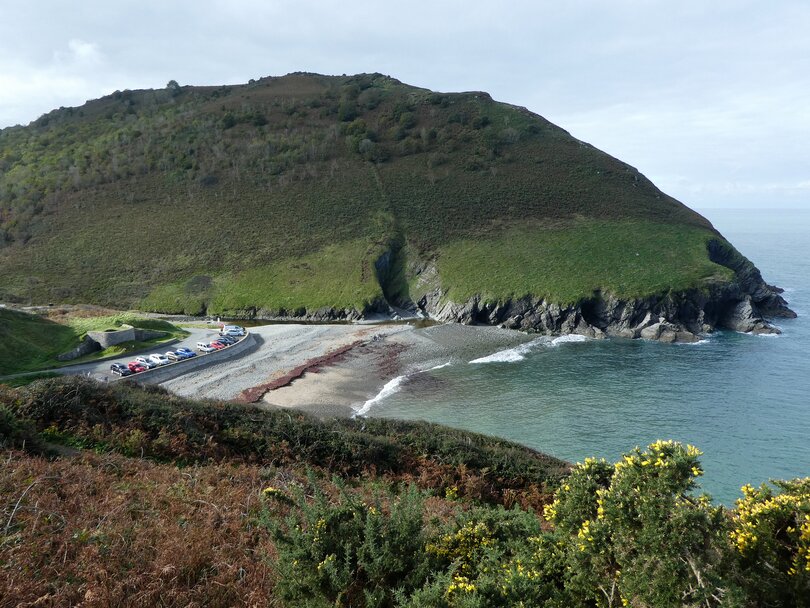 Cwmtydu beach & cove – I'd come round the top of the hill opposite in the pic & the path angles down & inland before turning coast wards whilst still dropping, it was near the bottom of this I nearly came a cropper when on a wet bit about a dozen sleepers had been laid in pairs with weldmesh on top for grip & after initial test knowing how slippy wet wood can be but finding plenty of grip I continued at my normal fast pace but without looking hit one in the last pair with metal on & my foot went skating out from under me but I just managed with help of pole not to go bum to ground. The structure at the back of the beach is a lime kiln & it's there because the lime came in by ship. 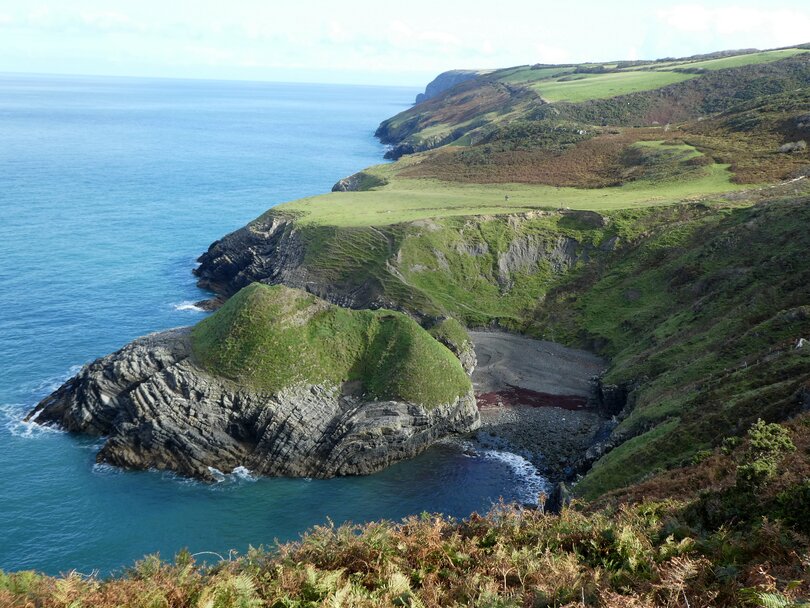 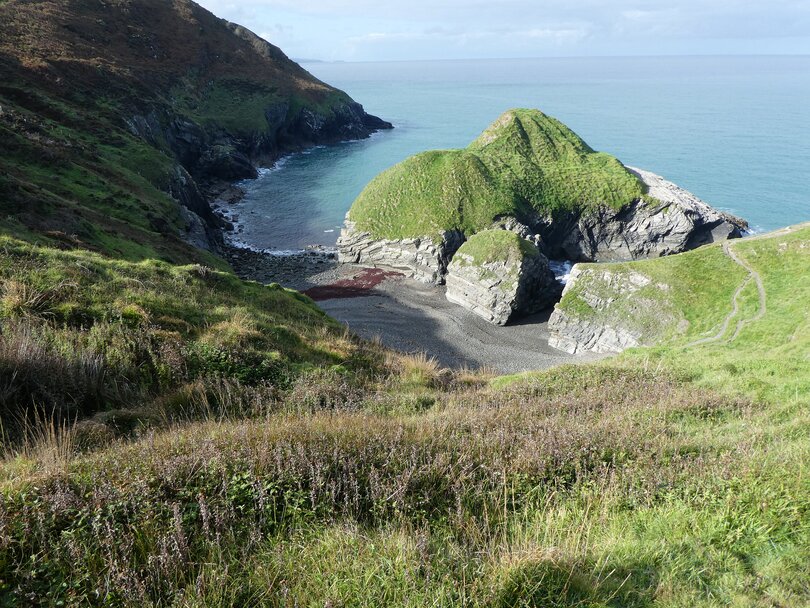 Castell Bach (marked on OS maps), 10 mins & 15mins on from pic 9, I did go down onto the beach but as the tide wasn't out far enough couldn't walk round but the sound of the sea between the islands was nice with an echo. The flat grass area is the remains of an ancient settlement. 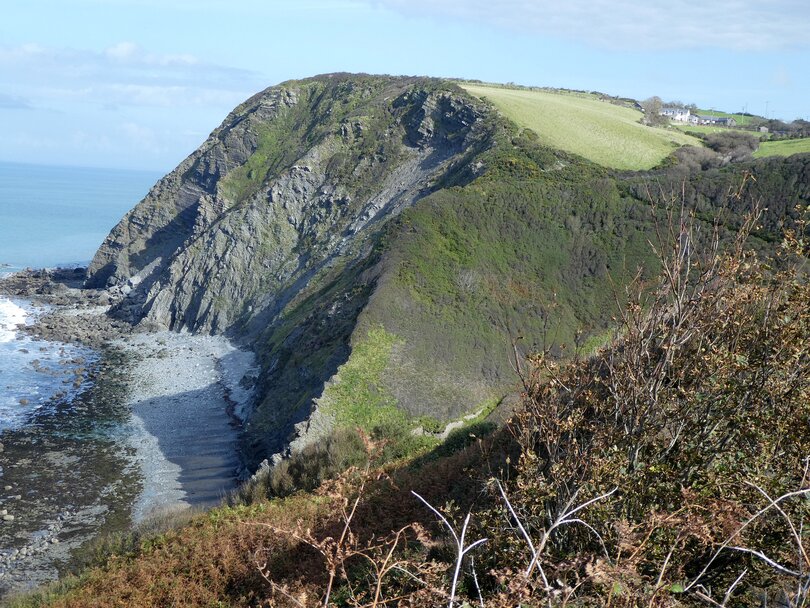 Looking on towards the Western cliffs of New Quay headland. 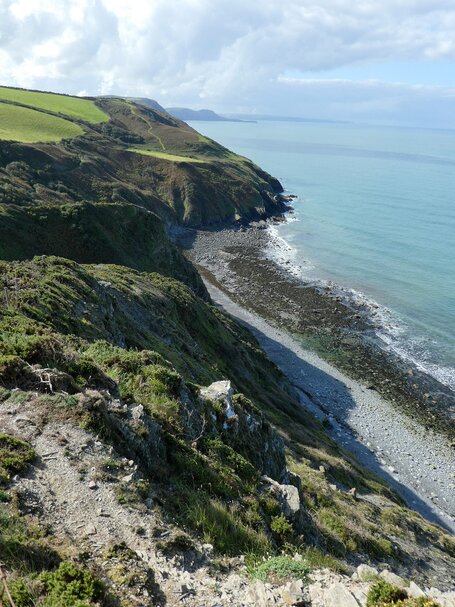 Since I was still on the outward leg this one is obviously looking back from a bit further on towards New Quay head. 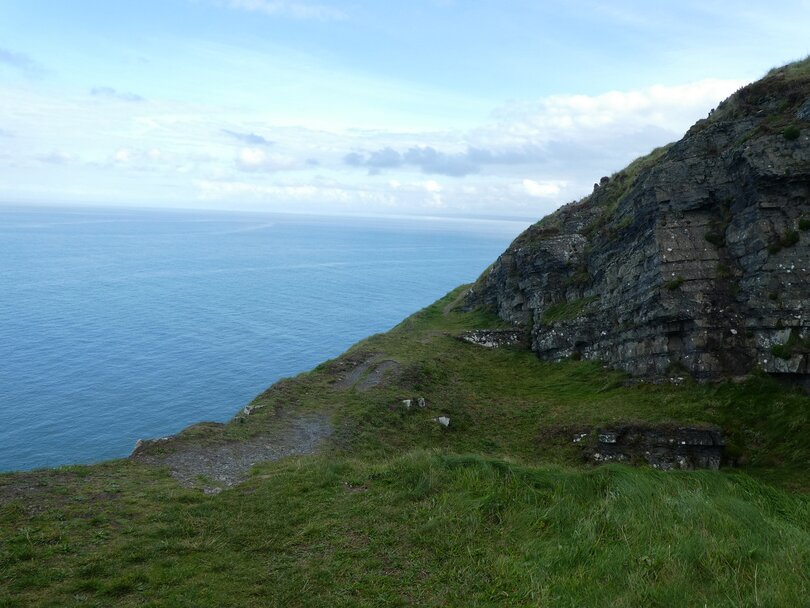 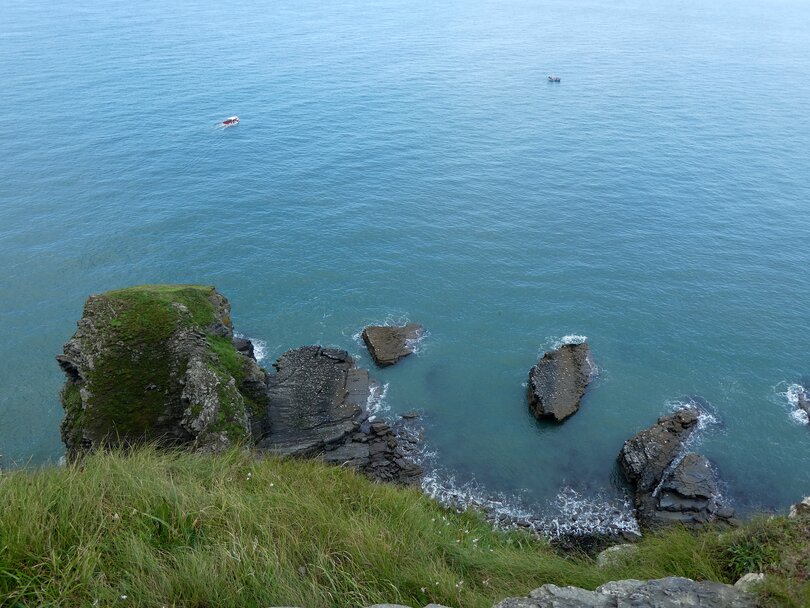 So just 0.6 mile short of New Quay headland itself the path splits & there's a sign explaining one is an alternative route avoiding the cliff edge, but I like thrills to an extent so took the edge path which at 1st didn't seem that much but the 1st shows the narrow part, you get about 2ft between the rising rock on ones right & the drop one ones left 2nd pic looking down. I have to say that it was enough to give my nerves a jangle. 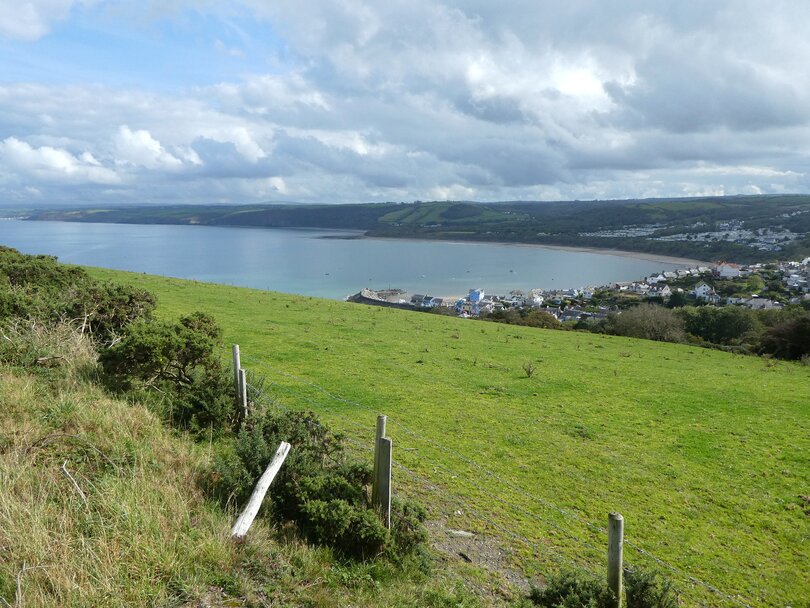 From the highest point the path goes on the headland, the view over New Quay with it's harbour wall just visible curving out below the grass field, the town itself is the nearer block of development, that rather spoiling the view further on is an absolute mass of holiday park caravans. 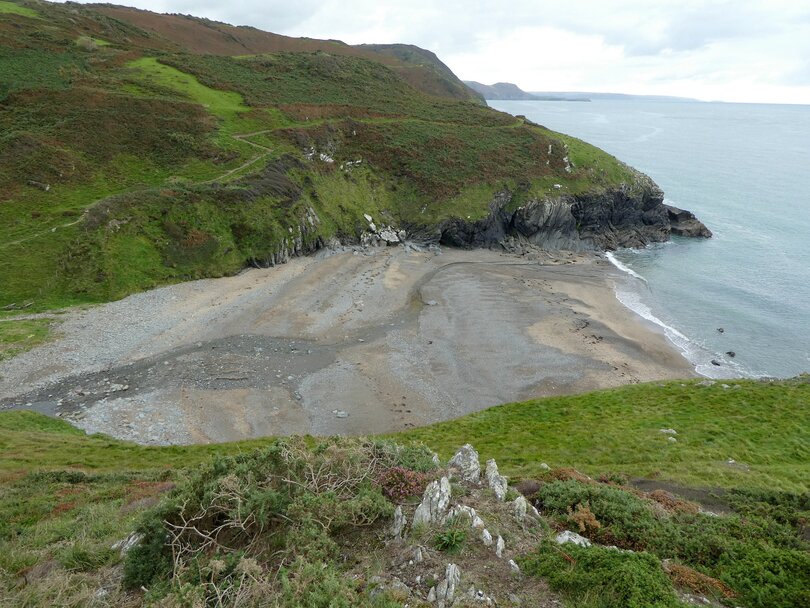 Having hit a residential road of New Quay I turned back, this one is looking down at Cwm Silio, so said national trust sign, on maps it's where the stream down through the hamlet of Nanternis enters the sea, I'd stopped on the outward leg at the same place for my lunch part 1 but better pic on the backward one. 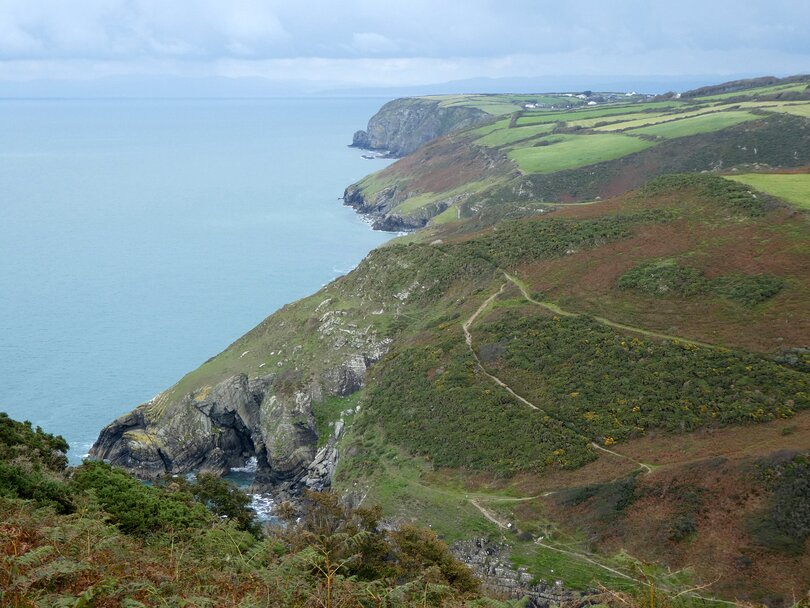 From up SW of Cwmtydu looking over where I'd taken pic 9 along the coast to the New Quay headland. 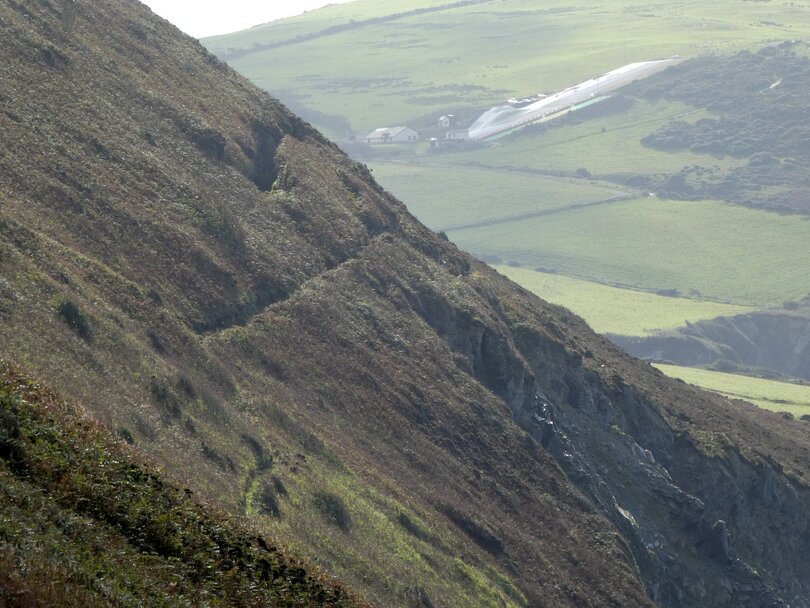 I made reference to this earlier with regard to a zig zag that shows up in my GPS trace & not marked on maps, the zig zag gets you up to a newer higher than original section of path cut into the cliffs below Penmoelciliau, initially the path went straight on, the line heading to the centre of the pic but, then a landslip visible with main part below the path, but also the scar above after which the path was closed until it could be re-cut higher up the slope. Also visible is the white ski slope that's part of a residential activity centre (labelled Urdd Centre on OS maps & by a tent on waymaps) for the school children of Wales, although when I passed it was closed due to Covid rules, but my backward route took my right by the head of it. 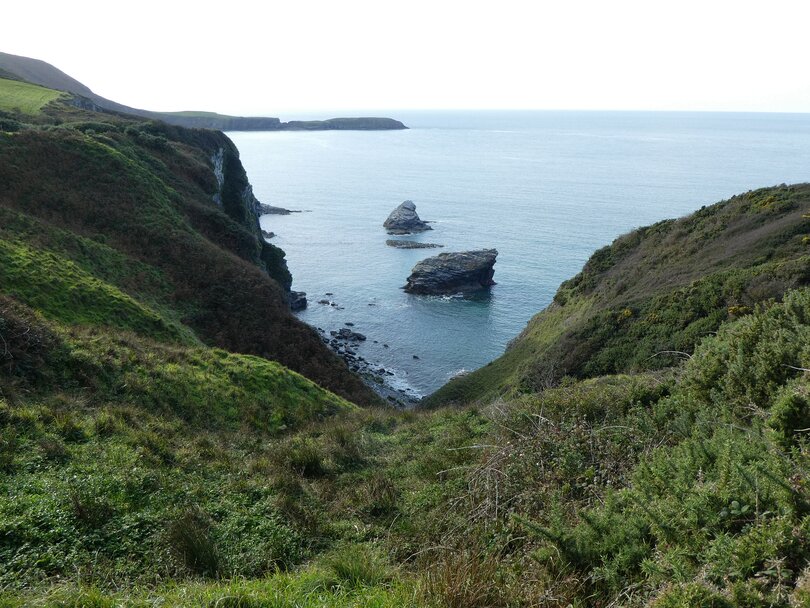 Having gone through a field section where waymaps marks the path where everyone walks whereas OS marks it at the field boundary & just past a footpath coming out to the coast path approaching the Urdd Centre another of the slashes into the land & the sea stacks standing proud.

Having followed the path & then concrete track up the backside of Pen Y Badell to the top came the view down onto Lochtyn peninsula & Ynys Lochtyn. 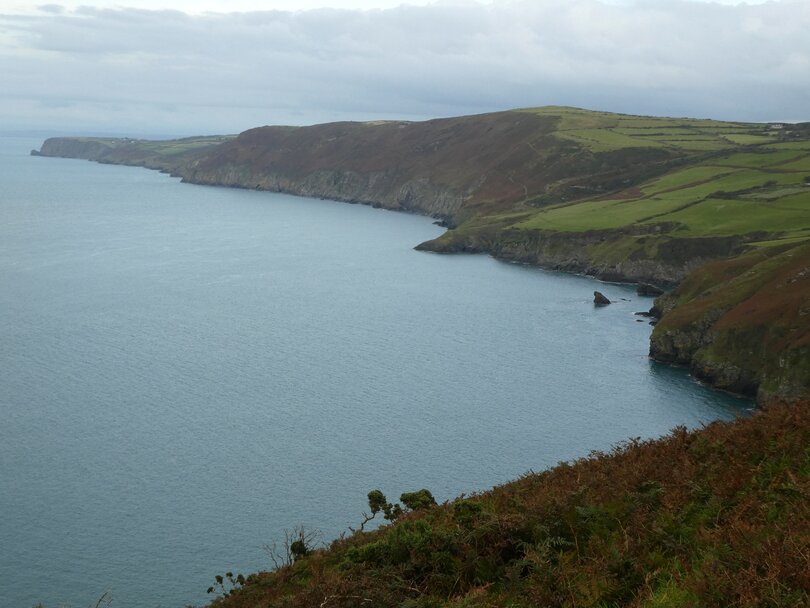 And it was from the same place came the last view of the day NE along the coast & it's one of the views I like where you look and know you just walked as far as one can see & some more & back again and I wasn't even in the last mile. 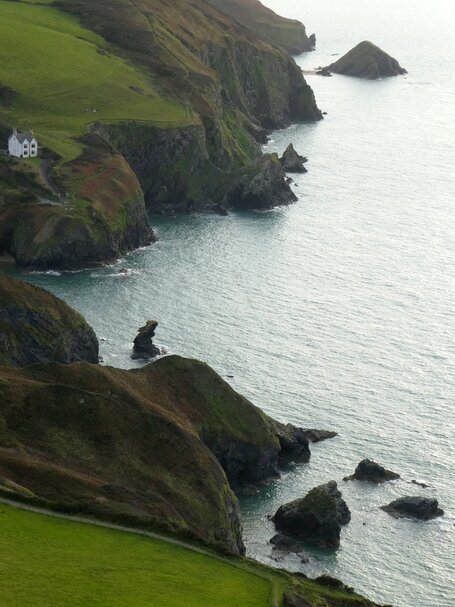 Still on the top having circled round anticlockwise the view down to the outer part of the cove where Llangrannog is & the various rock sea stacks including left most, Carreg Bica which legend says is the tooth of the giant Bica who spat it out when suffering from toothache. 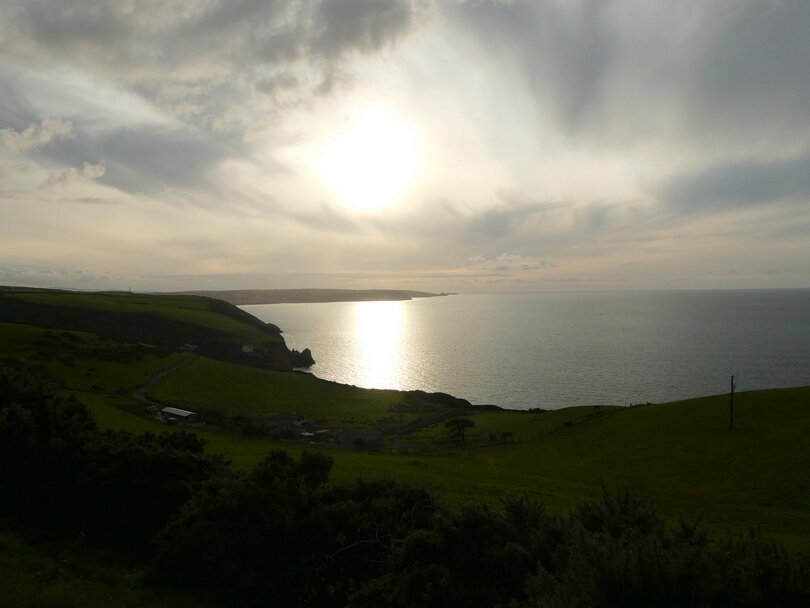 Rather than drop down to the coast path & then all the way to the sea I followed the road/track gradually losing elevation where this last pic came from looking SW all the way down the coast past various headlands to Cardigan Island although you can't really discern that from the pic & by 5.40pm with the sun lowering & light dimming a bit to the naked eye but a lot more to camera especially when looking into it, to give the bar of light on the sea.