Additional stats moving time- 4h 58min I'm slowly catching up with my back catalogue so to speak, so this walk was on a glorious late Nov 2016 day, there had been snow a few days before and odd traces remained, plus after a clear night there was a hard frost, these things contributed to firming up the peat under foot in the first part of the walk, such that there was some resistance to ones feet sinking in & the surface ice on water would bear up for a second before cracking with each step on it.

Although not marked on maps there is a path on the edge above the road down to Holme although I left it to cut across to the Holme Moss transmitter for a close up look, having seen it so many times from a distance & on clear days the mast provides a reference point for a quite a chunk of the dark peak.

After leaving the path that follows the Northern edge of Twizle Head Moss it did continue as a track to grouse buts following the inner reaches of Ramsden Clough for a while but then petered down to just the occasional passage of a person & quad bike and this is what continued along side the new fence on the edge of Withens Moor and onto the trig pillar on Dead Edge End. This section was pure wetness the bit of icy/frosty firmness of the morning wasn't there, although due to lack of being trodden and churned up by feet, the heather & the grass, provided some resistance to sinking but with the universal water coverage meant the occasional holes were hidden until you stepped in them. At one stage I crossed over the fence and moved out towards the drop in the hope of a better path but although there was a dry path is was actually a sheep track full of ankle twisting type tussocky grass so I gave up on that after a while and went back to the wetness.

When I started seeing the firm track that I walked on previously that runs above the Woodhead tunnels and was my aim point for this section I had to cross a great big clough that I'd been alongside after hitting the firm track I deviated out to the old quarry and realised looking at my GPS plot that I'd have been better continuing by the clough to this. The final section after leaving the track towards the reservoir on what I'd hoped was an unmarked path picked from aerial views wasn't it was just the passage of quad bike through a couple of foot tall tussock grass. If you ever walk this take the track down to the road from where the old vent shaft was.

On this walk I didn't walk out onto the dam of Winscar reservoir because I'd planned to walk along the Transpennine Trail from near Stocksbridge to the same end car park. It is worth going out onto the dam for the views. However I'd say the section of Transpennie Trail that I walked on although very easy turned out to be one of the dullest walks I've done, so avoid it.

Pic 1 - Setting out from Crowden the frost on the ground and the sun just showing over the hill's when in the bottom. 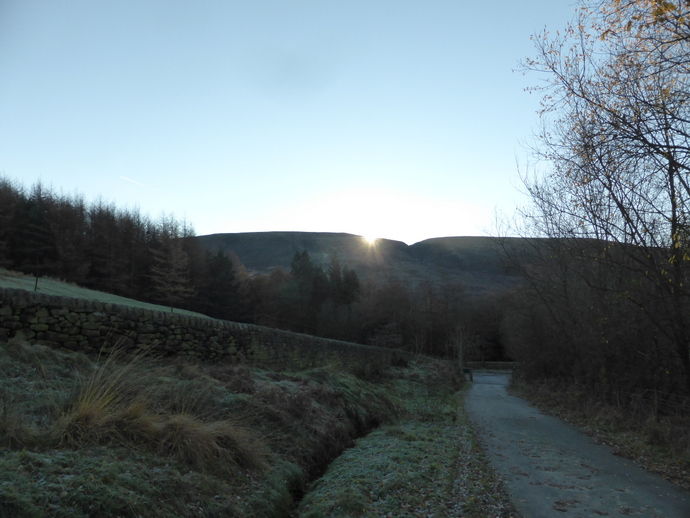 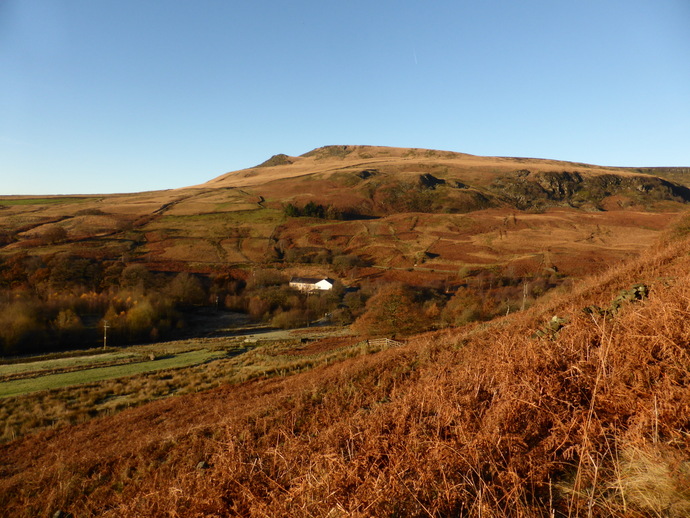 Pic 3 - Having gained some more height the woodhead reservoirs show themselves dominated by Bleaklow. 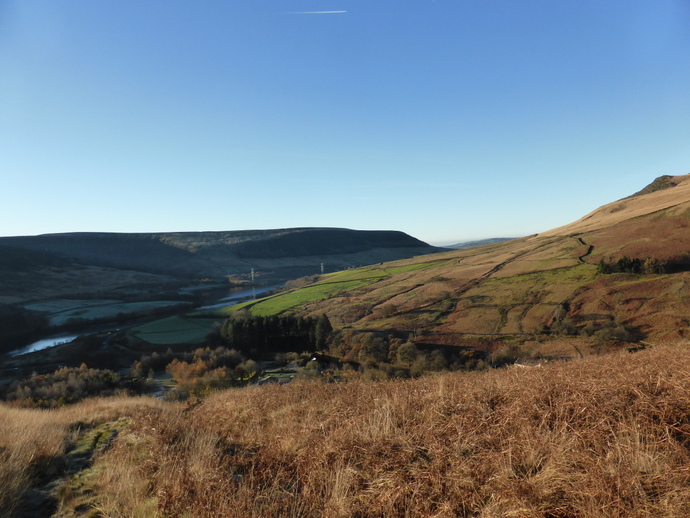 Pic 4 - Not a rocket from Cape Canaveral but the Emley Moor transmitter. 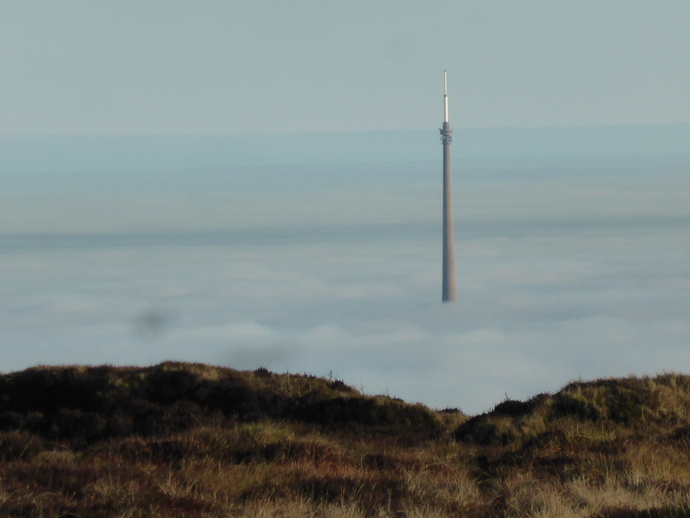 Pic 5 - A unnamed body of water with ice around the edges & splodges of snow scattered over the moor. 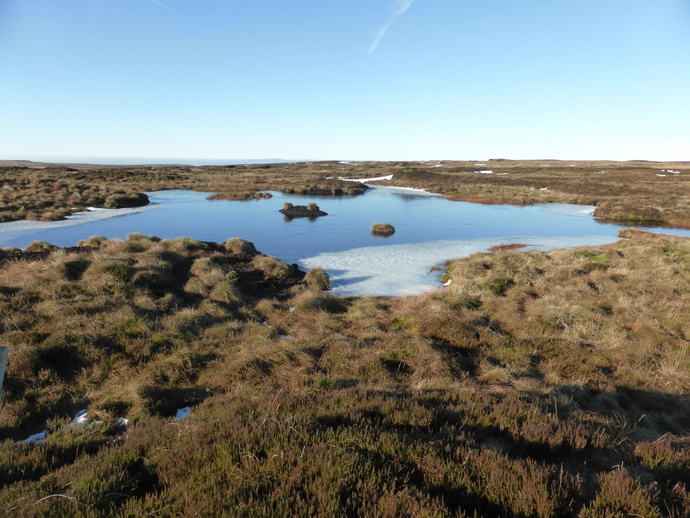 Pic 6 - The trig pillar on the summit of Black Hill & the Holme Moss transmitter standing tall in the distance. I was just going through Wainwright on the Pennine Way photographic book the other day and there was only bare peat to be seen around the pillar with no grass or heather, things have changed ! 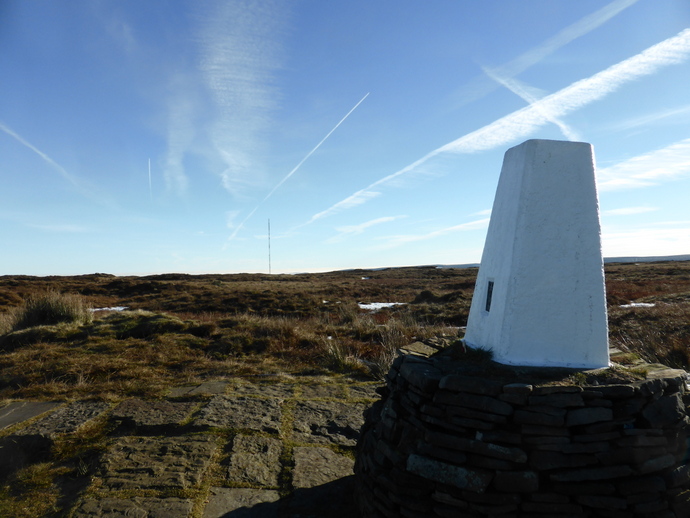 Pic 7 - Looking back towards Black Hill on the walled in track that heads down to Holme. 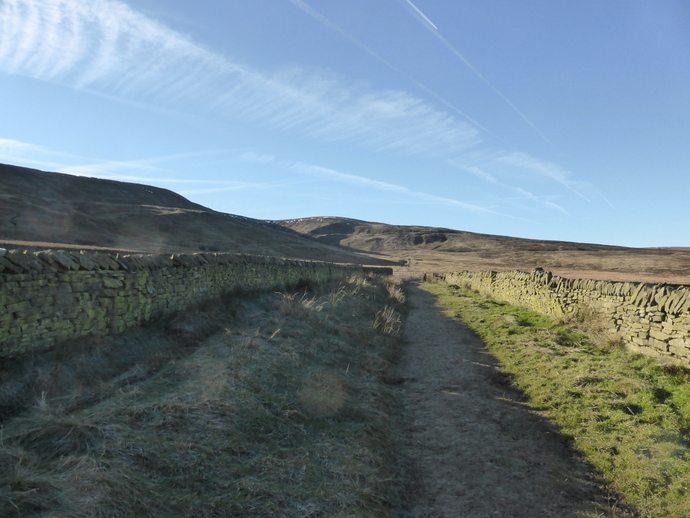 Pic 8 - Approaching Holme Moss transmitter across the moor with all the jet streams hanging in the sky. 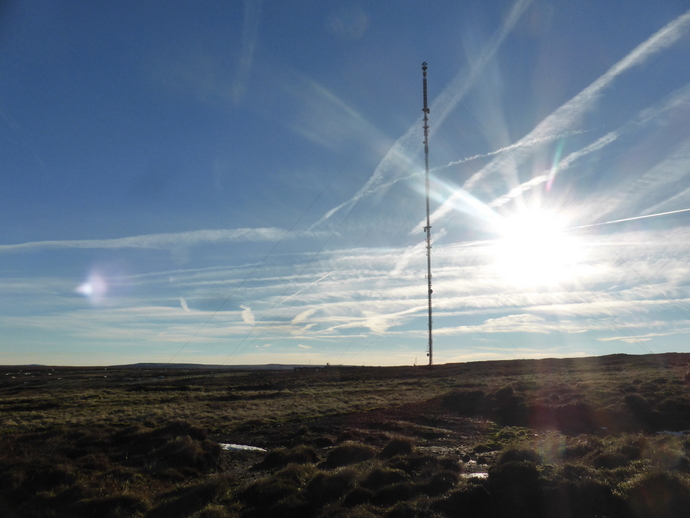 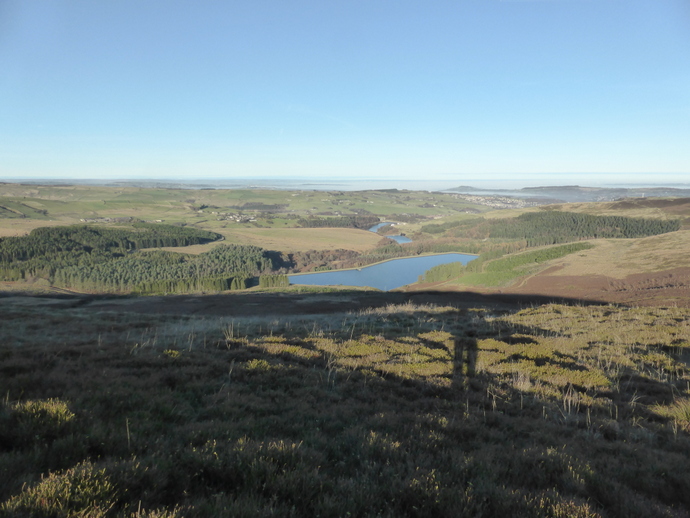 Pic 10 - Having crossed over the moor & reached Withens Edge one could see over the hidden Woadhead road to Bleaklow in the distance. 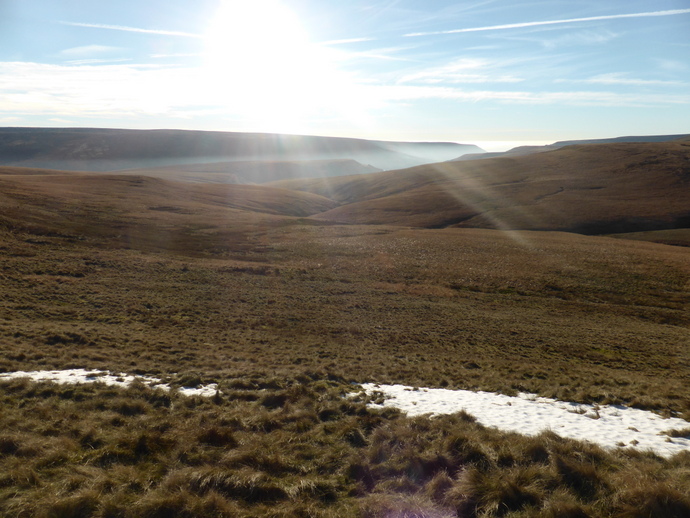 Pic 11- The remote trig pillar at Dead Edge End gave extensive views out and although only mid afternoon the sun was already adding tint & stretching the shadows out this late in the year. 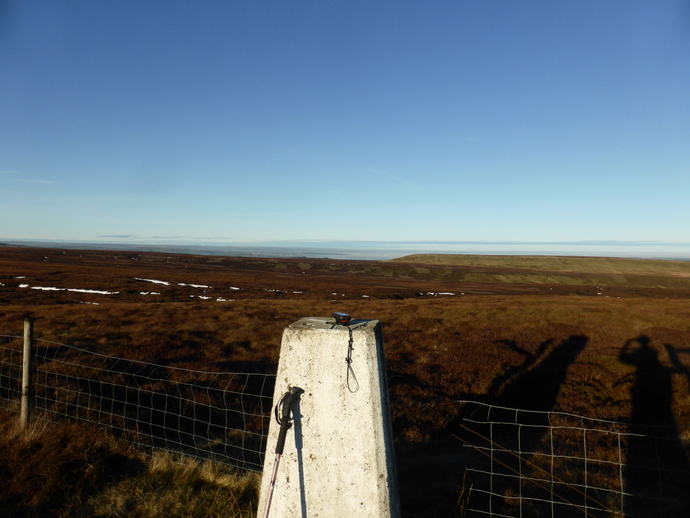 Pic 12 - Same position as last pic but looking back along the fence I'd walked by and the ever present Holme Moss transmitter thinly visible. 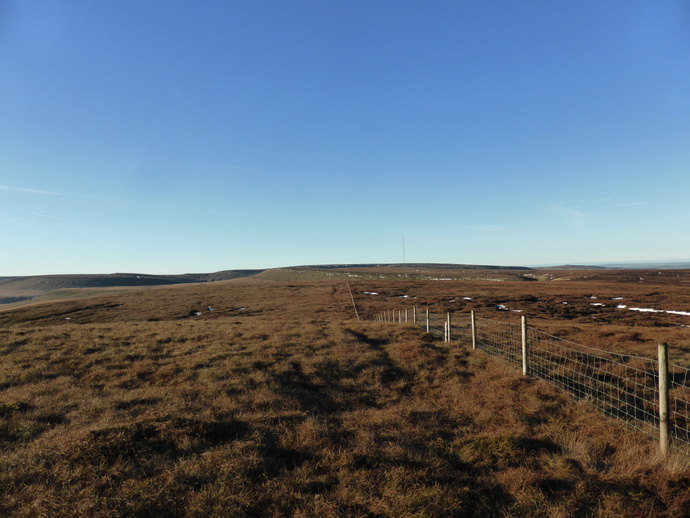 Pic 13 - The hard track above the Woodhead tunnels provides easy walking whilst out on the moors and good views in this case over the end point of my walk at Winscar reservoir to the wind turbines beyond. 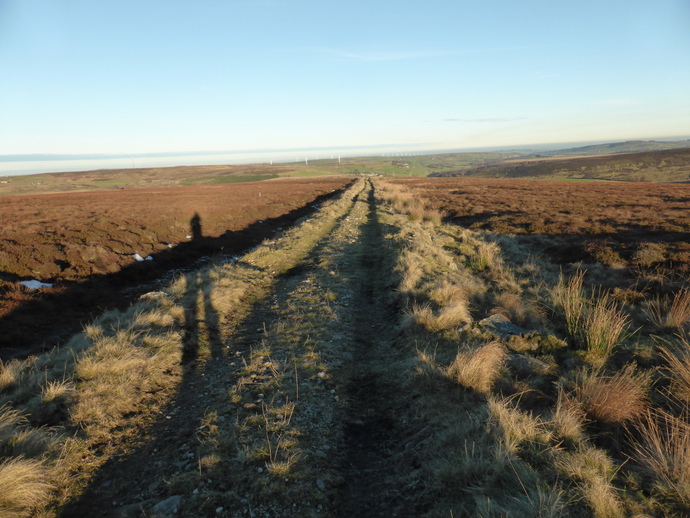