Starting from a roadside pull-in, I walked along Greenside Road to the old Greenside Mine area. - Now home to the Helvellyn YHA building etc. Beyond the buildings, I crossed the footbridge over Glenridding Beck, onto the fell-side leading towards Red Tarn & Helvellyn.

Much of the early season snow had now melted, with little remaining below the 2000ft level. Higher on the fells, snow cover was patchy, giving a "zebra-like" look to the high tops. What snow did remain was generally in good condition for walking, having had several freeze-thaw cycles in which to become hard and stable. It is worth noting though, that on main path routes that see the passage of many walkers, much of the remaining snow had become very compact indeed. Being, to all intents and purposes, sheet ice, - so due care was needed when crossing these areas.

Reaching Red Tarn, a decision was needed. Do I go up via Striding Edge - or Swirral Edge? From where I was standing, Striding Edge looked mostly devoid of snow, whereas Swirral Edge did at least have some snowy patches, especially on the steeper bits near the top. Plus, I'd ascended by Striding Edge several times recently. So, decision made, this time it would be up via Swirral Edge for a change!

Much of the scramble was on bare and mostly dry rock, but the snow patches were on steep ground - and sufficiently hard to preclude a safe ascent by step kicking alone. - Time to get the crampons on and unhitch the ice-axe. Safety first - always!

An enjoyable few minutes later and I was at the top. Magnificent views all around, just slightly marred by some thin cloud drifting in from the west, more or less at summit height. And some general low level haze in the valleys which would take the "crispness" out of any distant views in photos.

Not many people about meant that it was easy to find a cosy corner in Helvellyn's summit shelter for lunch - during which time the Fell Top Assessor appeared, taking his daily wind speed readings etc. by the summit cairn.

After lunch, it was a delightfully easy stroll across to Helvellyn Lower Man, followed by White Side, and then onto Raise. From Raise summit, I headed north to Sticks Pass, before turning eastwards, following the Sticks Gill path (with the Lake District Ski Club buildings and ski-tow now on my right). Passing through the disused quarry workings, and descending via Stang End back to Greenside Mine area, I finally retraced my walk-in route along Greenside Road back to the car. - Another great day in the Lakes!

Looking towards Catstye Cam from the Red Tarn Gill path: - 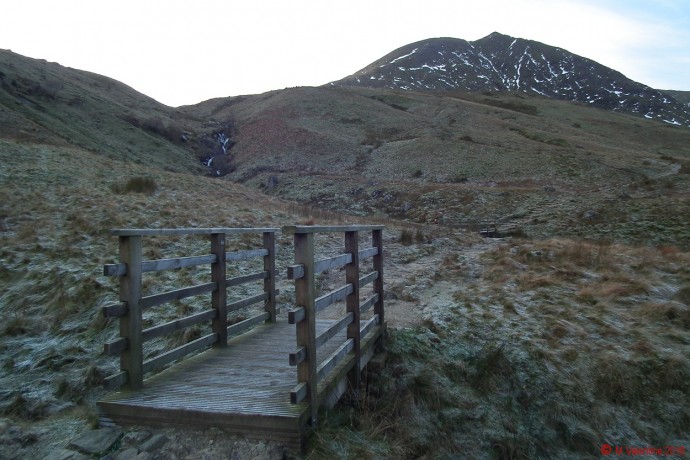 Helvellyn and the Edges, as seen on the approach to Red Tarn: - 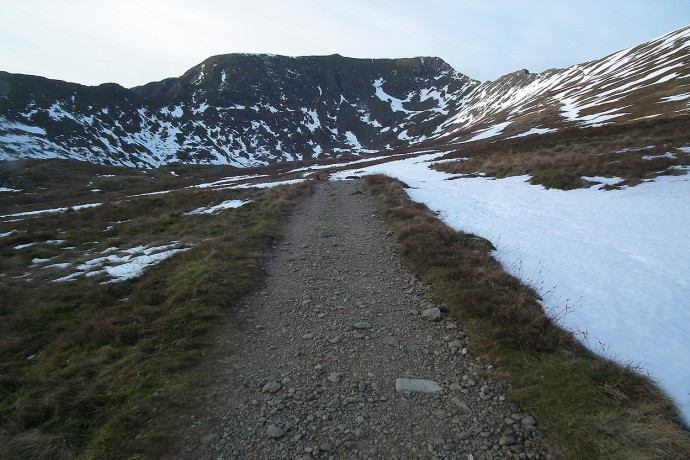 A close-up view of the upper section of Swirral Edge: - 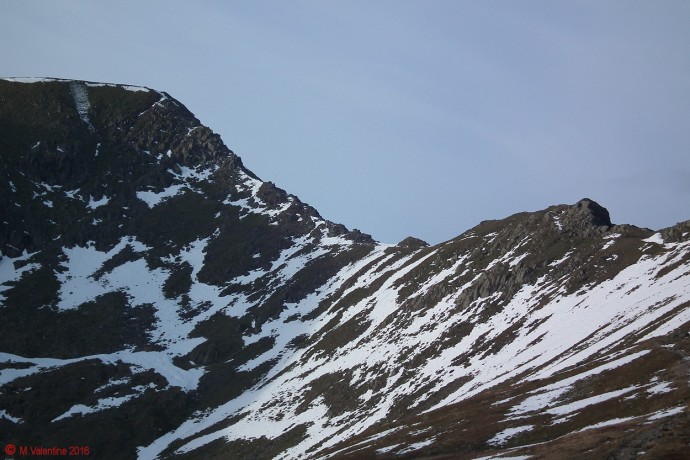 The view across Red Tarn from Helvellyn summit ridge: - 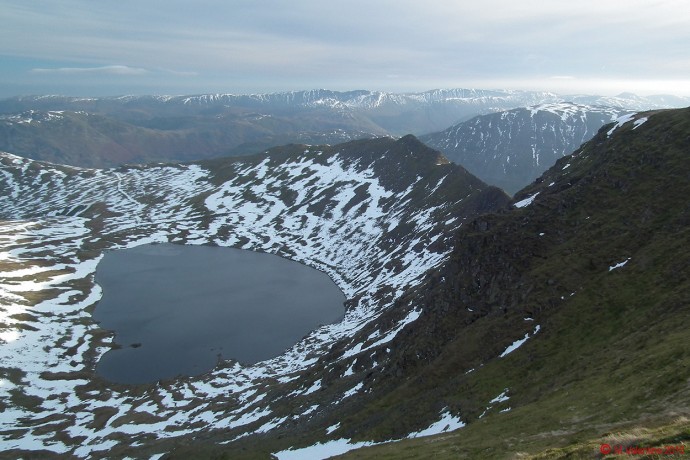 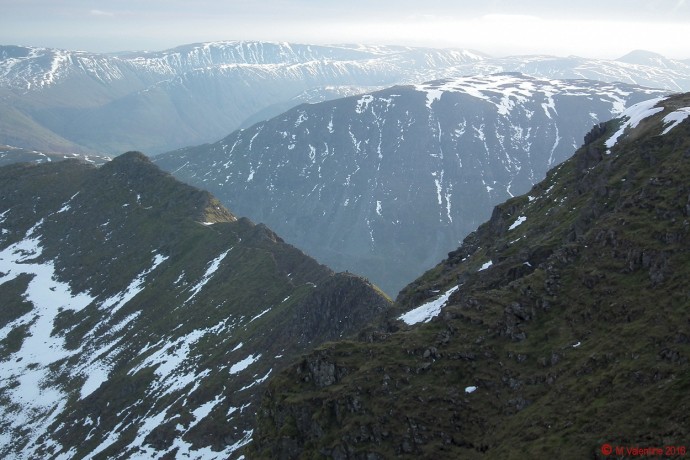 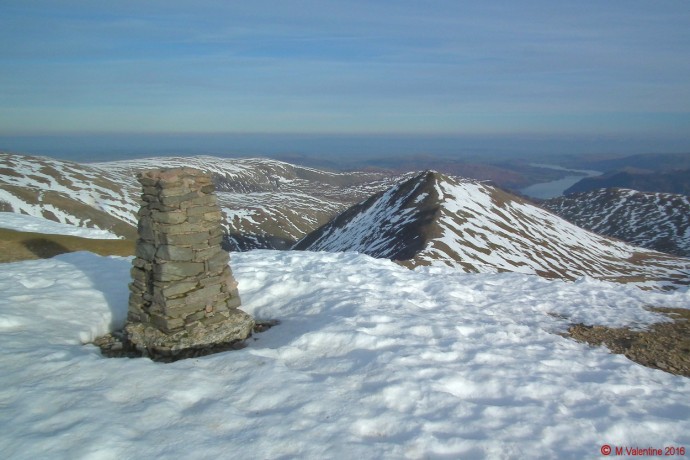 Looking northwards to Helvellyn Lower Man - with Skiddaw and Blencathra in the distance: - 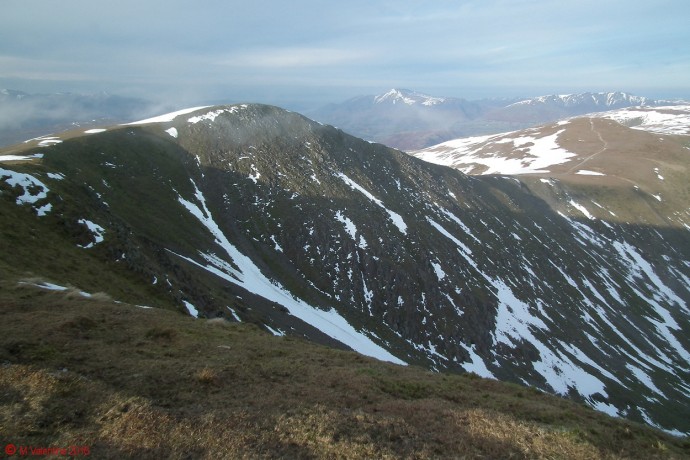 Looking across Browncove Crags and Thirlmere from the summit ridge path to White Side: - 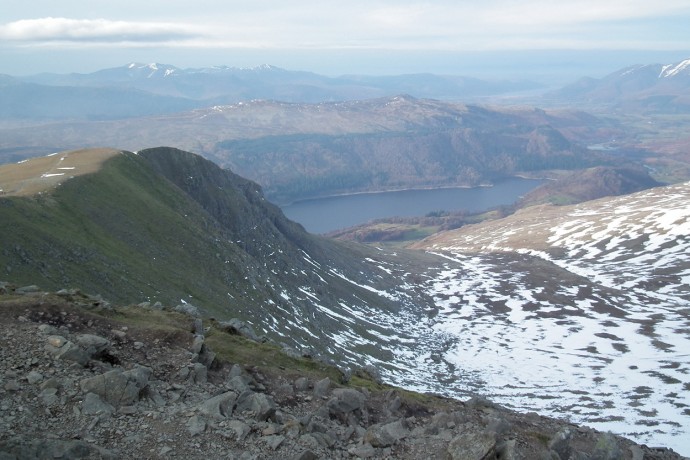 A closer view of Browncove Crags: - 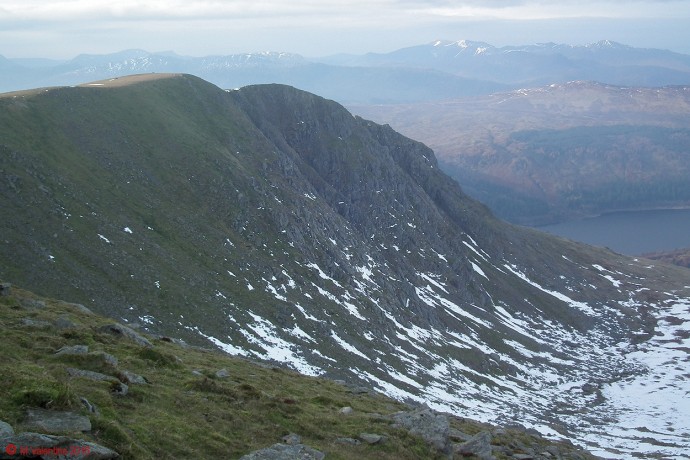 A distant Skiddaw, as seen from White Side: - 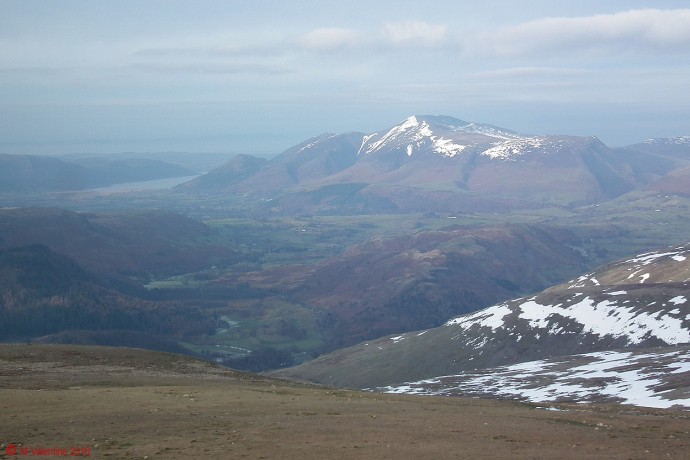 Blencathra seen across "The Dodds" - (Taken whilst on the ridge path to White Side): - 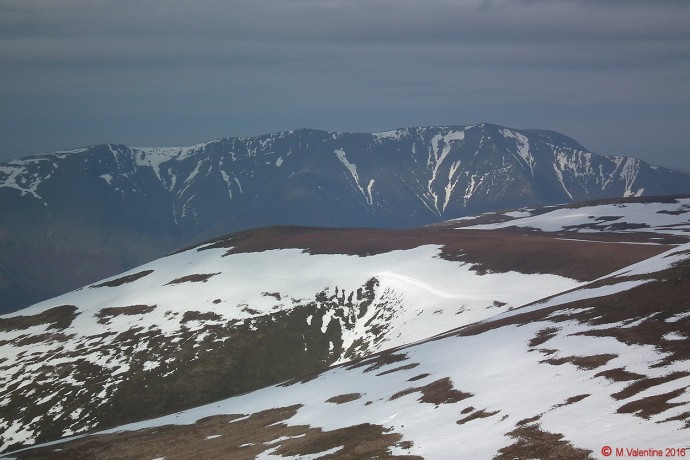 Looking back to Helvellyn in silhouette. (Taken near the summit of Raise): - 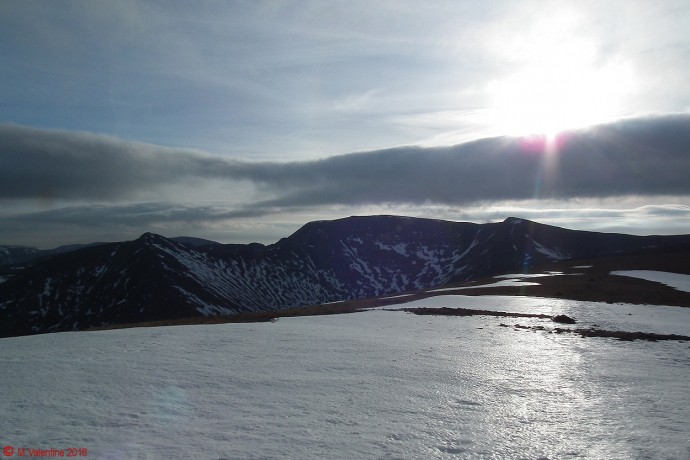 The summit cairn at Raise, with Skiddaw and Blencathra beyond: - 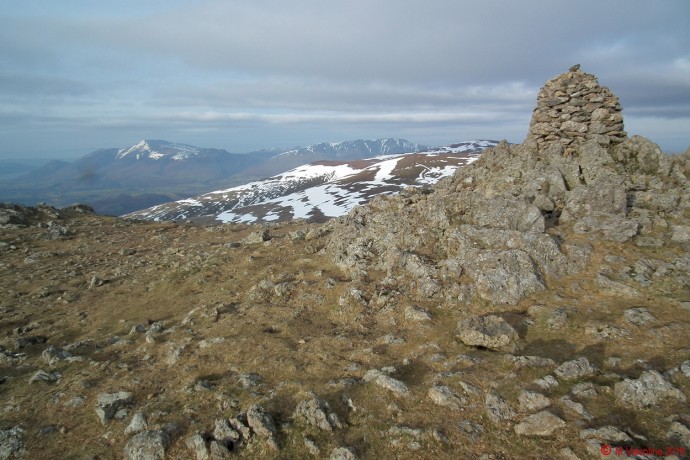 Ullswater from Raise. (Taken on the descent to Sticks Pass): - 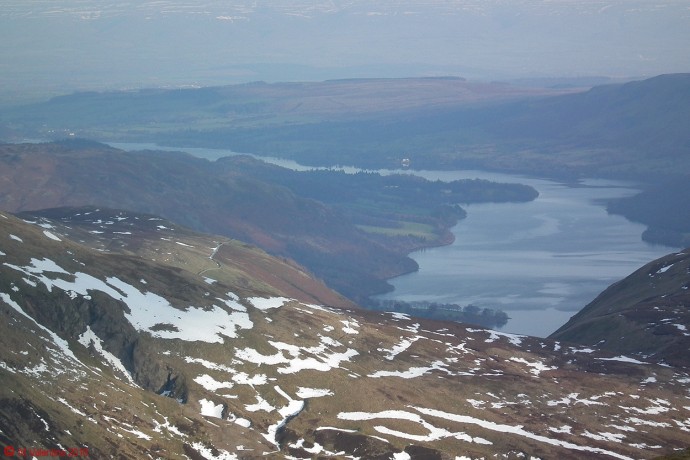 The Ski-tow, and buildings of The Lake District Ski Club, high on the flanks of Raise: - 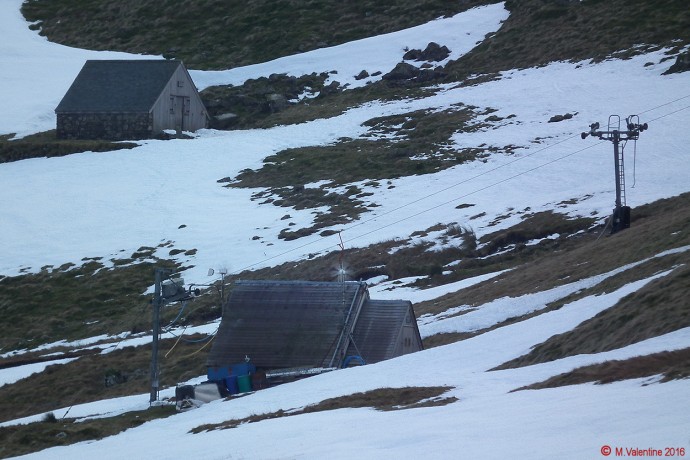 Looking towards Sheffield Pike from the Sticks Gill path: - 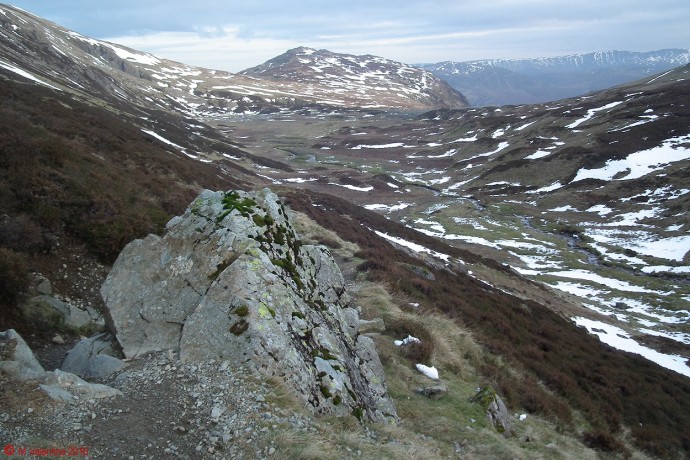 Evidence of the long abandoned quarries in the area above "Lucy's Tongue": - 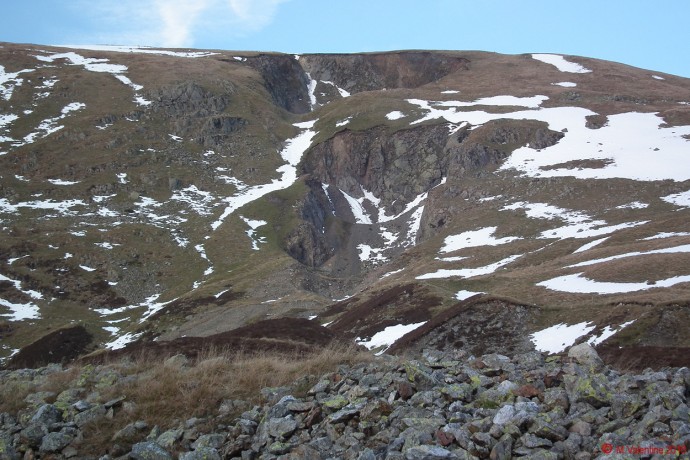 Looking towards Catstye Cam from the Stang End path on the way back down to Greenside: - 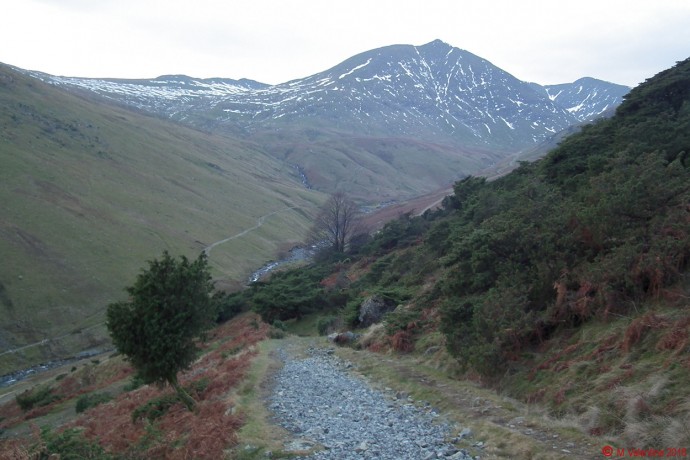 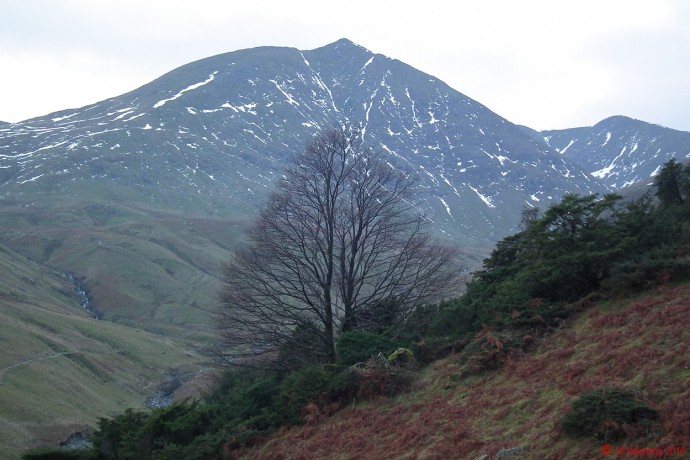 Looking back towards "Lucy's Tongue" across the spoil heaps of Greenside: - 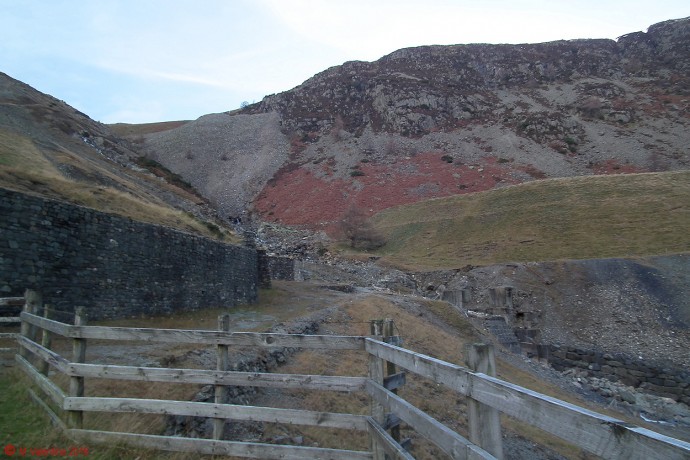 Many (many!) years ago (prob 36 years) when my mode of transport was a 100cc Honda motorbike I turned up on the car park at High Park Wood just off the A591, locked my bike to the fence and set off up what I call 'the fast and dirty route' to the top of Helvellyn ! I've always favoured the steepest and shortest route to the top of anywhere cos my legs give out before I;ve got to the summit if I take a long route! (These days in my middle 60's they give out just looking up from the car seat

) But that day I set off 'womanfully' for the summit of Little Man and found myself going round and round but not gaining height - this was a common problem for me! I remember quite clearly it took me 4 hours to reach the summit of Helvellyn. The view was - epic - exhilarating and one of the best bits during the ascent was hearing and seeing Ring Ouzel on territory! So there I was, having challenged myself to this epic climb and made it, I sat for quite some time already aware that this would be a once in a lifetime visit for me (as it has turned out) and I was anxious to make the most of it. I bemoan the fact that digital cameras had not been invented at this point .... so I'm sat there drinking in the view for probably an hour and half at least, when up come a party of walkers, heads down, yomping along, yapping like a gaggle of geese about their work and family problems - on reaching the summit they all took a cursory glance around (I bet they didn;t even really see that magnificent view) and then it was heads down, yak, yak, yak marching off into the distance .... Suitably rested I went on to 'conquer' Nethermost Pike, High Crag and Dollywaggon Pike before heading down to Grisedale Tarn and off down the side of the waterfall route, till I came out on the main road. Totally cream crackered I was then faced with yomping myself back to the bike ... as luck has it my mam and dad drove past me (I didn;t see them , head down, sweat in my eyes!) but apparently a min or two after passing my mam said to my dad 'That was our Pauline walking along the roadside' fortunately for me they turned around and came back to see if I wanted a lift (did I ever!) and where was the bike ... I didn't sit in the car I slid into it! The bike was where I had left it still chained to the fence. I've always thought the length was 9 miles or so but I think that was the effect of the ascents, it was probably less mileage than that ....

I've been up Helvellyn and surrounding fells "umpteen" times, but always from the east side as I like the approach walks/views better, (along with Striding Edge, etc. etc.).

I do have intentions of doing it from the High Park Wood carpark one of these days though, as that's the best start point for doing a bit of ice climbing in the gullies on Browncove Crags. (Winter gully climbing is at about the limit of what I'm comfortable in doing, so I need to keep at it while I can still manage and enjoy such things!).

I had visions of doing it from there two years back. - But the A591 became closed off long-term due to the aftermath of Storm Desmond. Plus, that February, I had the torn calf muscles incident on Cofa Pike - which ruled me out for the rest of the winter. Last year the winter was just too mild, and the gullies never really came into good enough condition.

The ice tools are there, cleaned up, sharpened, ready and waiting - all we need is some good winter weather - maybe this year - who knows?