The promise of a gloriously sunny day on Sunday had me travelling back to the Lake District once again, for another grand day on the fells. This time, I'd decided to do Blencathra, Bannerdale Crags and Bowscale Fell, then dropping back to valley level at Mungrisdale. Where, (depending on how good the legs were feeling at that stage

), I had the option of walking back to the car by the gated road between Mungrisdale and Scales, or going up and over Souther Fell and Mousthwaite Comb.

Starting from the layby on the A66, (Between Scales & Doddick), I walked along the roadside towards Threlkeld, taking the lane towards the Kennels at Gategill. Along that lane, many hundreds of common Nettle plants were to be seen, and it was noticeable that lots of them were playing host to Nettle Clustercup Rust, (Puccinia urticata), a "rust" fungus which infects the Nettle plant causing gall like structures on the stems and leaves. Worth taking a look at these, as under close inspection, they are quite attractive looking things: - 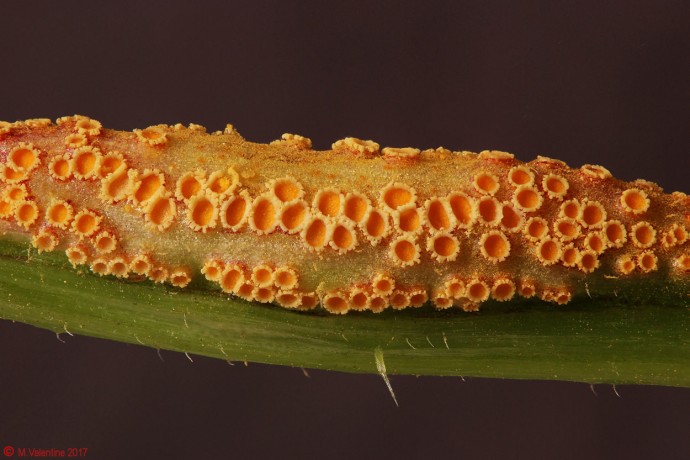 Beyond the lane, the public footpath quickly took me past the buildings and onto the fellside for the first scenic shot of the day. Looking up to Hall's Fell Ridge just before crossing Gate Gill. - Hall's Fell to right hand side of the photo, and Gategill Fell to the left: - 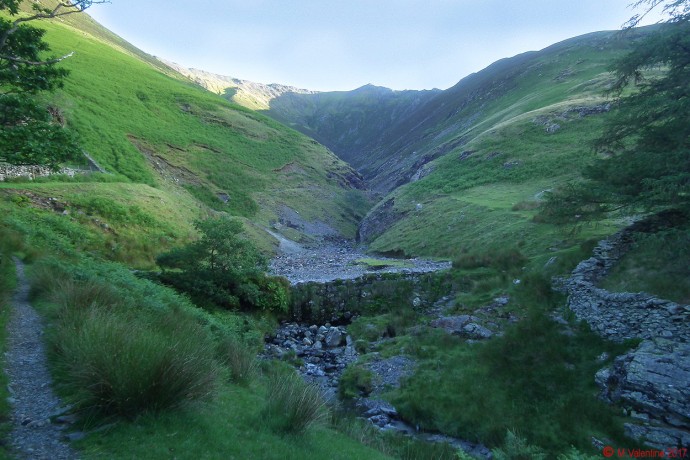 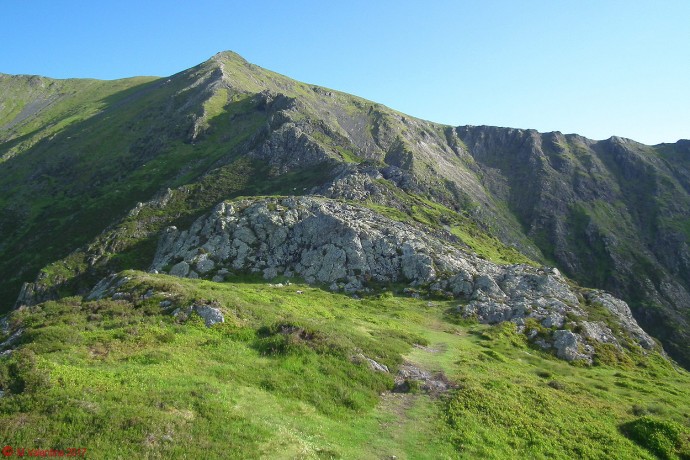 Looking back from Hall's Fell Ridge, with Clough Head and the Helvellyn range prominent in the shot: - 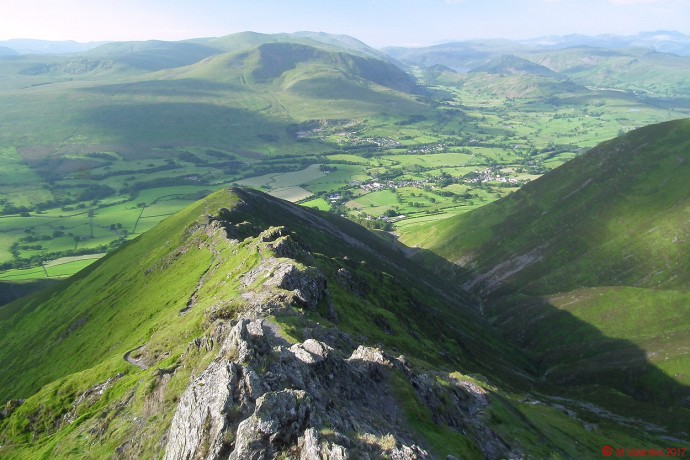 Almost at the top now, and looking in a West-South-Westerly direction to the skyline vista across Gategill Fell: - 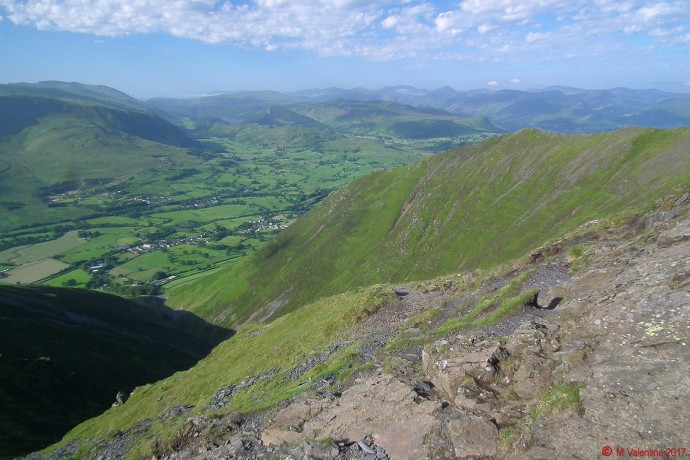 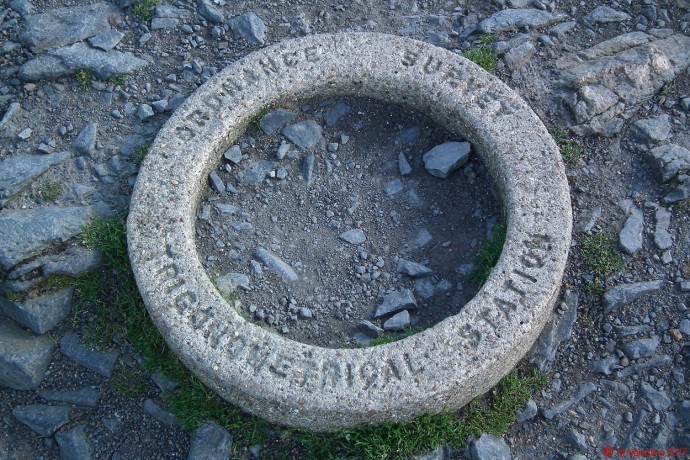 The OS Trig Station in context: - 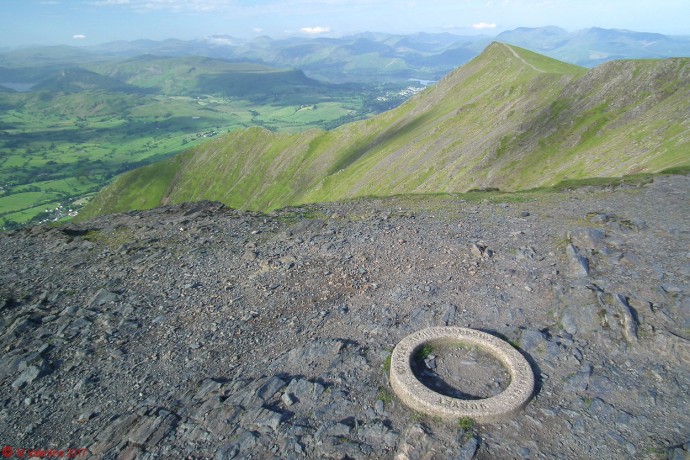 Looking northwards, just a few paces from the summit, and it seems that Blencathra's little known population of miniature Druid's have finally given themselves away!

(No idea who "built" this, but it did add a little bit of interest to the vast expanse of grass in the shot!) 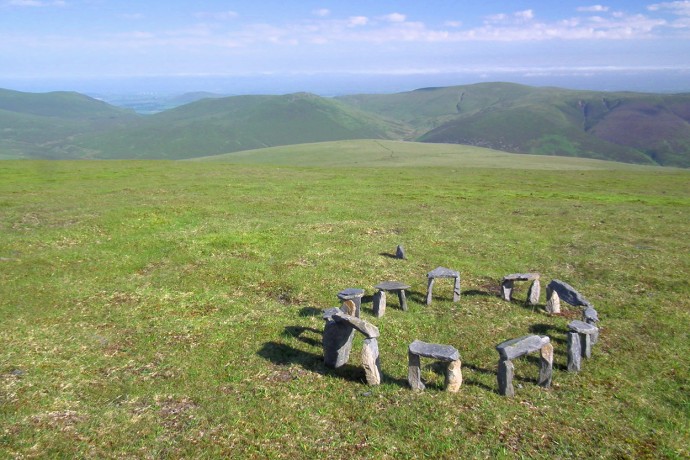 On the way down to Scales Tarn, and looking towards Souther Fell in the distance. - Will the legs be feeling good enough to still want to climb that at the end of the day? 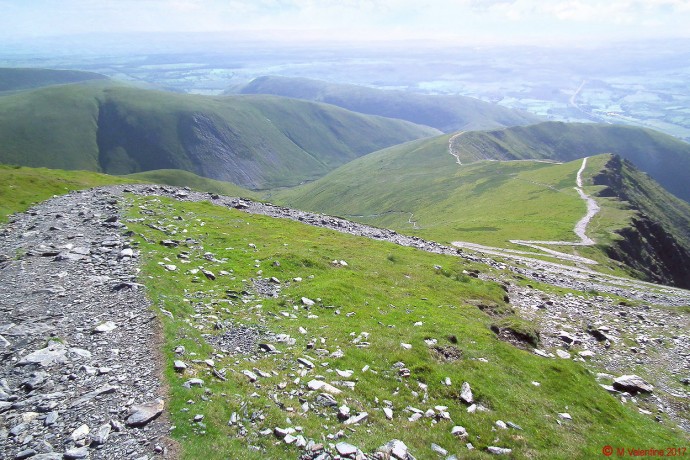 First sighting of Sharp Edge and Scales Tarn. - Never fails to impress, no matter how many times I've seen it: - 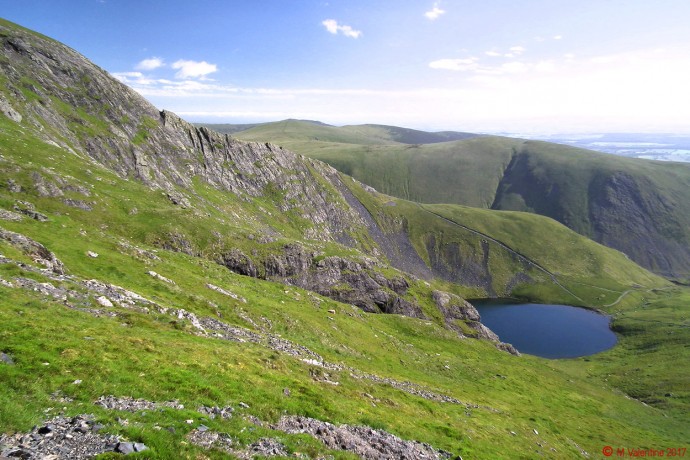 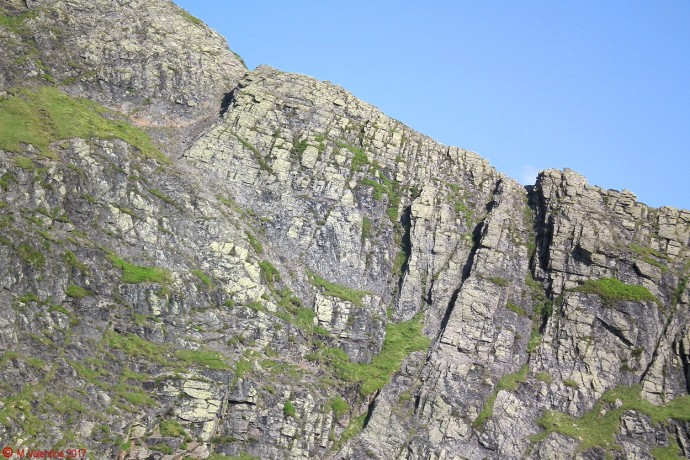 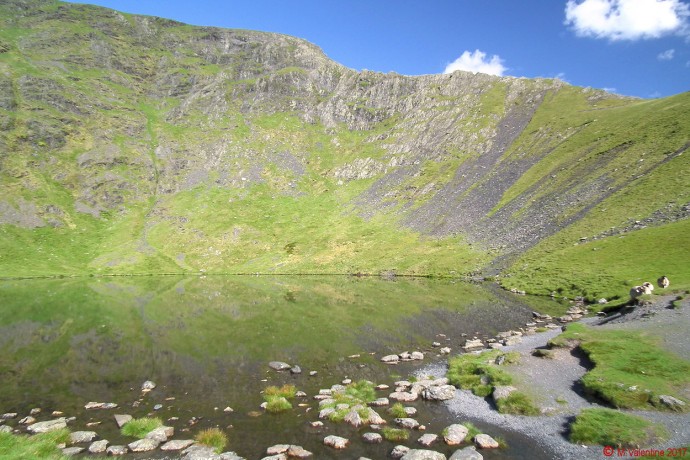 Looking back down Sharp Edge: - 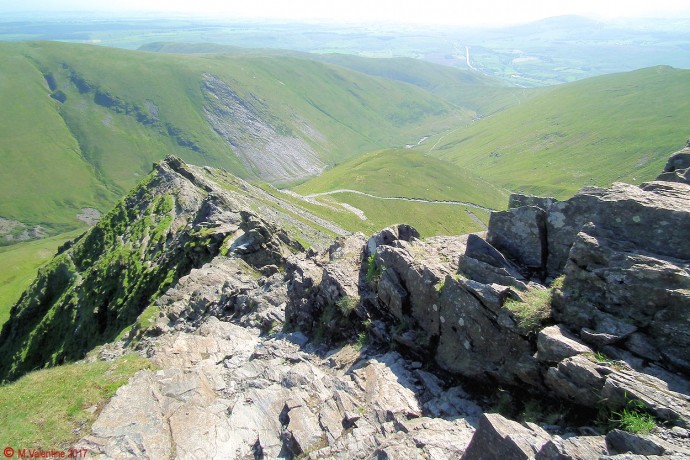 Looking across Sharp Edge from part way up Foule Crag: - 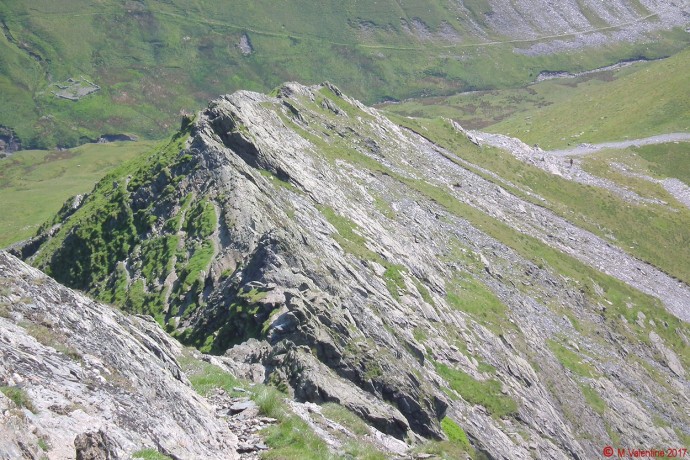 After climbing Foule Crag, I made a short diversion to the White Cross Memorial, located on Blencathra's "saddle", before calling in at Atkinson Pike's nearby summit.

The White Cross Memorial, with Skiddaw on the horizon: - 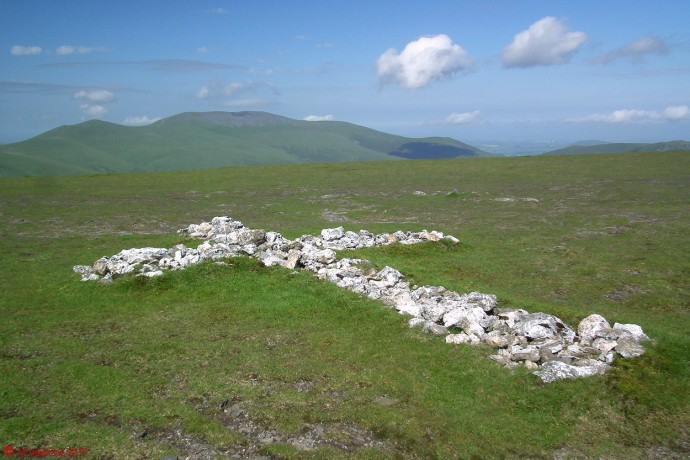 The other side of Sharp Edge, (with Foule Crag to right hand side), - as seen from the path heading from Atkinson Pike towards Bannerdale: - 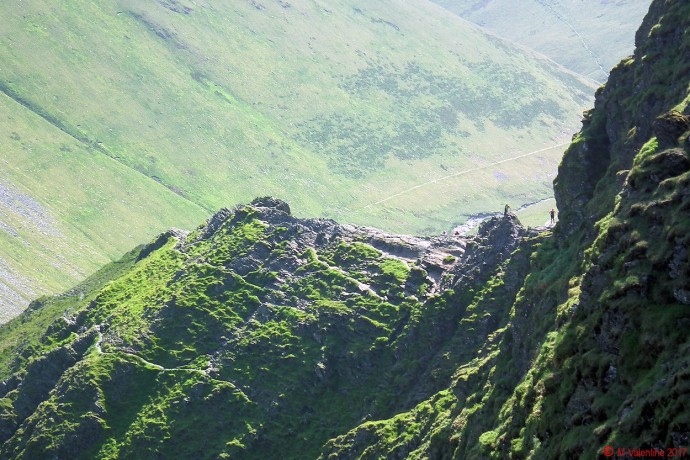 Looking back to Sharp Edge. (Taken on the way up to Bannerdale Crags summit): - 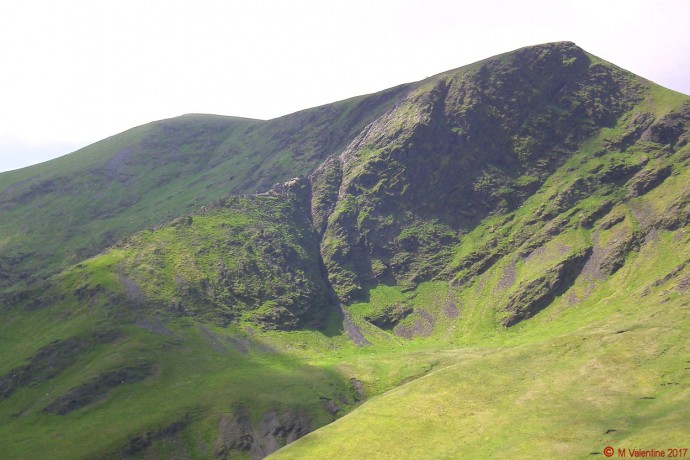 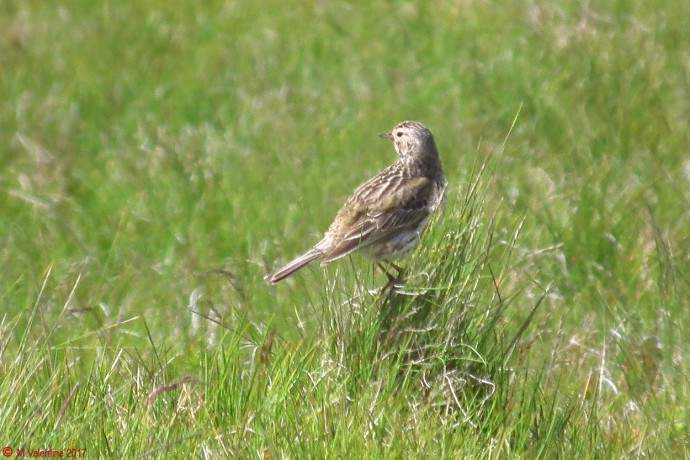 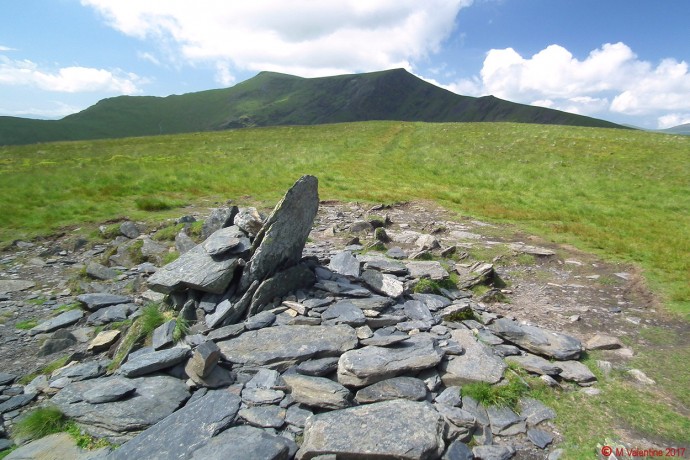 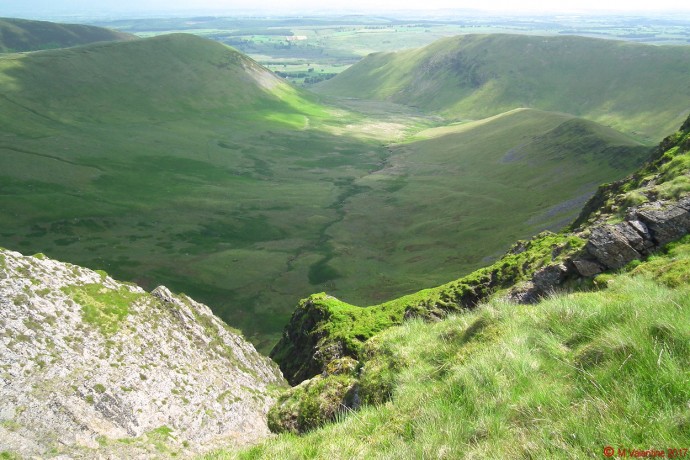 Looking back to Blencathra from Bowscale Fell summit:- 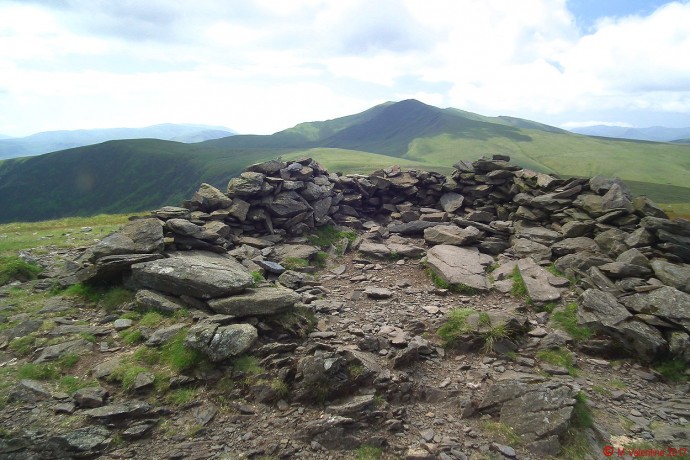 Approaching Mungrisdale after the long easily angled descent across the flanks of The Tongue, and Storm Desmond's flood damage is very much still in evidence along the banks of the river Glenderamackin: - 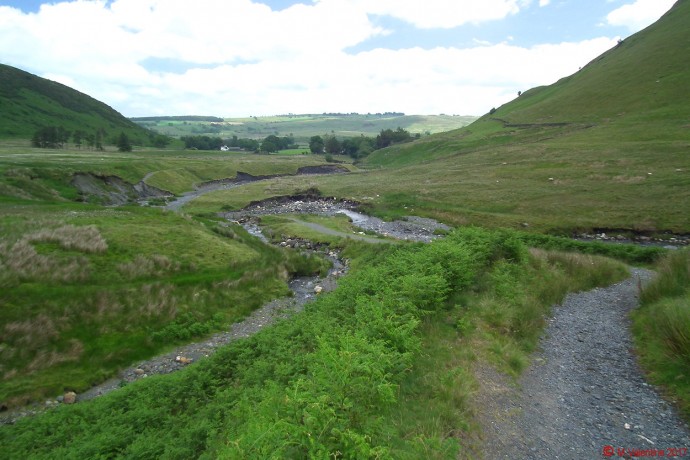 The Mill Inn at Mungrisdale: - 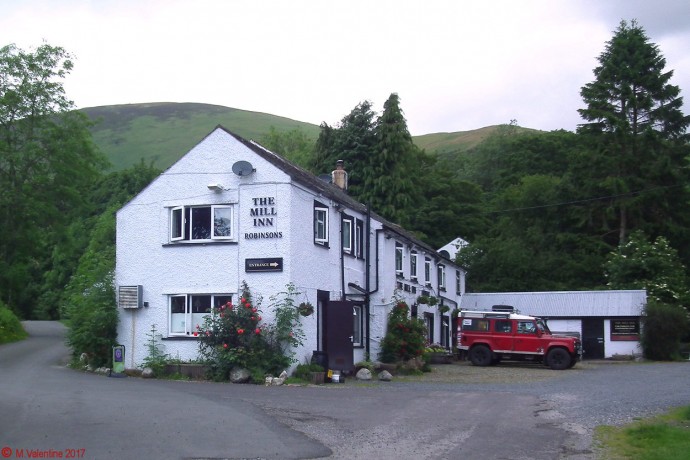 At this point in the walk, I had to make the decision whether to carry on along the road back to the car, or climb Souther Fell. Decisions, decisions! - it had been a very hot day, (in fact as I found out from a news broadcast later, it had been the hottest day of the year so far). However, it was still only mid afternoon, it would only involve about another 1000ft of ascent, and the legs didn't feel too bad. - Oh, go on then, I'd talked myself into it!

The view back towards Bannerdale Crags from Souther Fell: - 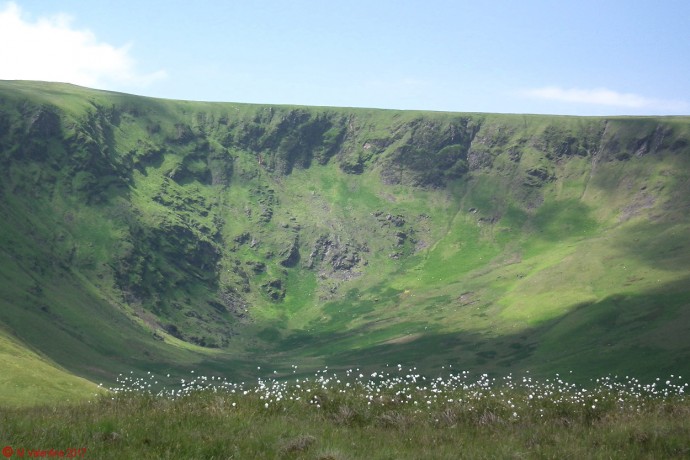 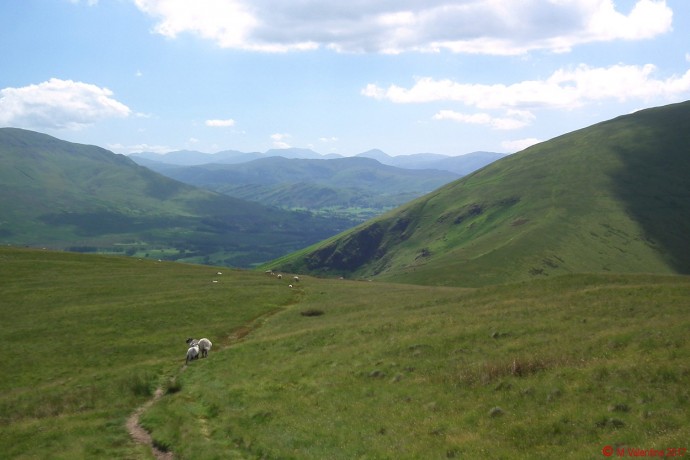 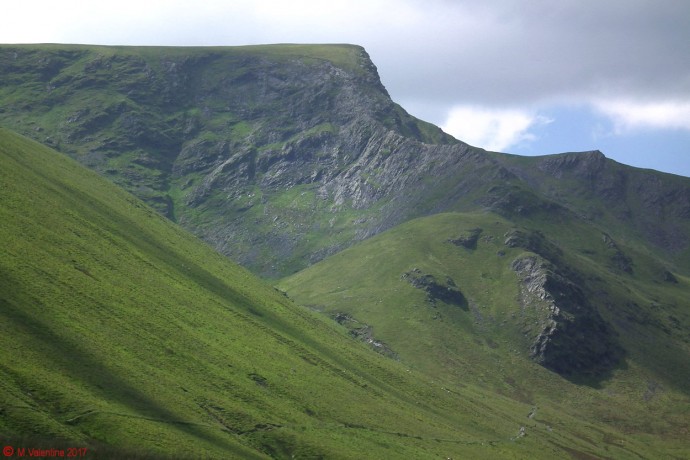 Looking across the flat plains beyond Mousthwaite Comb to Great Mell Fell: - 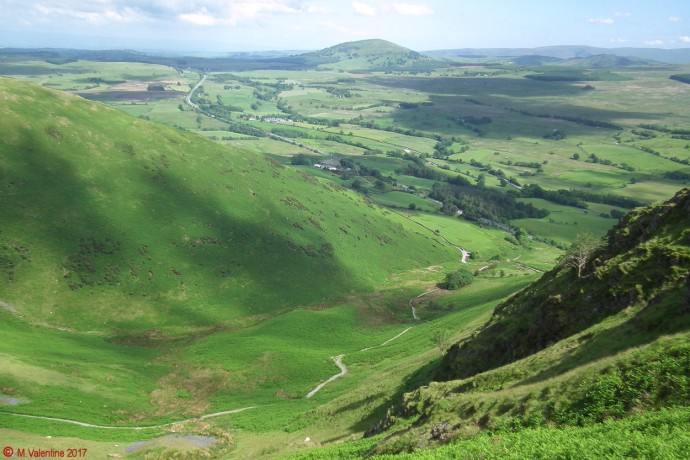 From Mousthwaite Comb, the last leg of the walk involved an easy gradual descent around the flanks of Scales Fell. Passing behind the White Horse Inn at Scales, (at which point a steep and direct alternative path drops down the fellside for those in dire need of liquid refreshment!

), to come out onto the A66 at Scales, with just a few final yards along the roadside back to the car. Another great day in the Lakes!

Footnote: Storm Desmond has caused major erosion to the banks at the point where Bullfell Beck flows into River Glenderamackin. A large section of land has completely washed away, taking with it the footpath from just beyond the footbridge. (and the footbridge itself is currently sitting very precariously on a partially washed away base).

There are signs, (Only seen on descending from the fellside when almost reaching that point), advising walkers to take extreme care when trying to negotiate passage across that area.

I would fully agree. Getting across this short stretch of ground is at best very awkward - and potentially dangerous. The shot below was taken from near the ridgeline on Souther Fell. The annotated red line is the route I took to get past the obstacle. 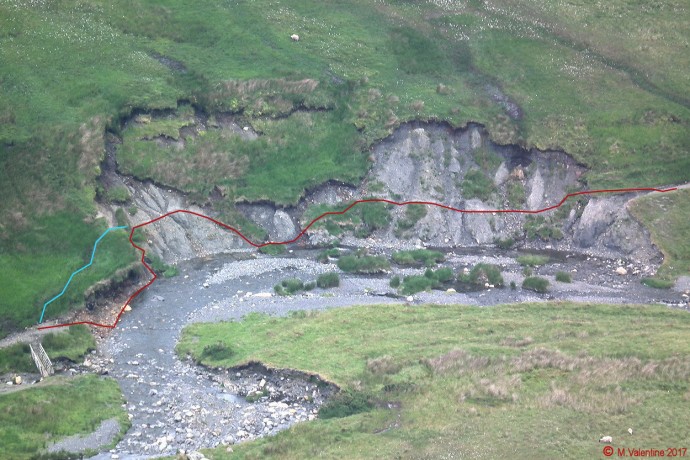 The blue line, which at first glance appears to go across easier ground, in fact crosses an extremely boggy area. (I'm talking knee deep in mud and probably losing your boots boggy!).

The route I took has the one merit that it doesn't put you into a bog - but I would stress that the ground underfoot was very loose and very steep. Given the terrain, any slip would probably be injurious, or at best, involve getting very wet!

Also worth noting that there wasn't that much water in the river. - Had there been, I wouldn't have been able to get across that first section immediately beside the water's edge, just beyond the bridge. - I certainly wouldn't like to have traversed any of that area, had I been with children or dogs.