The Pikes of Scafell

I am semi using the old title of this fell as I topped out all its 7 summits listed by Wainwright in book 4. This was the first day of my 2018 holiday & this year I was camping at the National Trust Wasdale site to access some different fells from my previous years. It was a generally fine day although the cloud level was brushing the tops so that the views came and went, sometimes to quick to get the camera out to capture them. My basic plan was to cover the Scafell's plus some of the usually bypassed lesser summits of Scafell Pike although hereafter I tend to call it The Pike, with the addition of a couple of the supporting fells to make a full day of it. Here are the full route & profile.

An early start & a stiff breeze meant things were cool but going up the grassy end ridge of Lingmell warmed one up & gave one a chance to survey the area of my campsite, in the trees by the river, yes the trees rather spoiled the view there but they did break the wind that was blowing all nights, with Wastwater & Illgill Head to the left & Middle & Yewbarrow fells to the right. This shot was taken just as the angle of assent slacks off 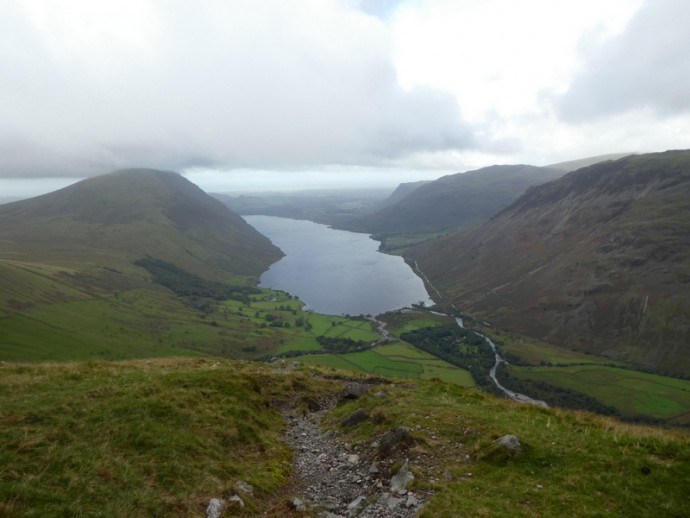 Having continued up through the boulder field to the top of Lingmell I was now into the cloud although a break in it gave me a view over Styhead Tarn down into Borrowdale. 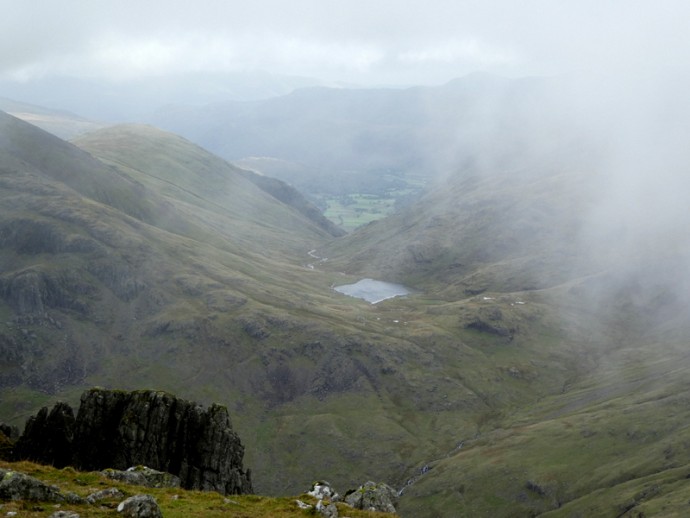 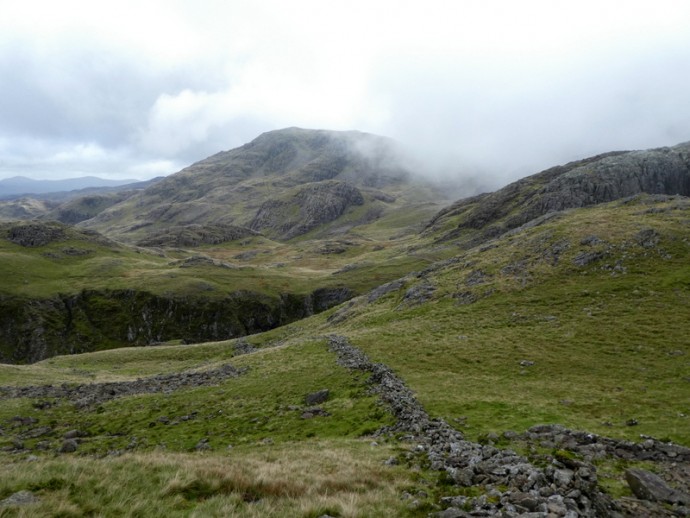 Although before getting there came these shots of Great Gable with the cloud mainly cleared off it 1st pic & looking along Piers Gill to Kirk Fell with the NE crag face of Lingmell 2nd pic below. 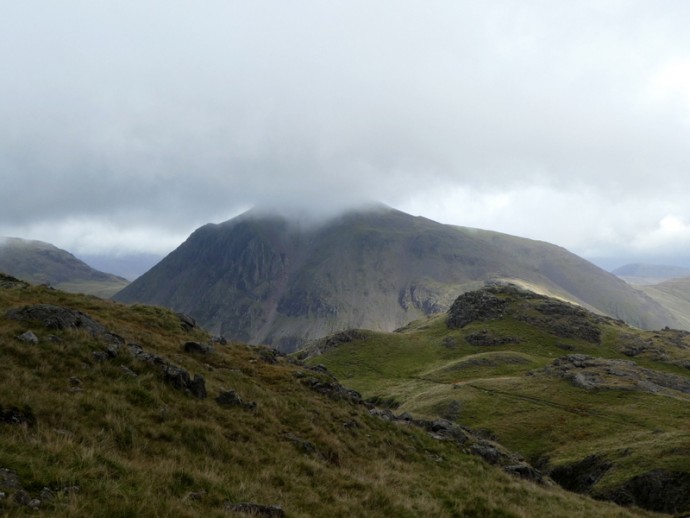 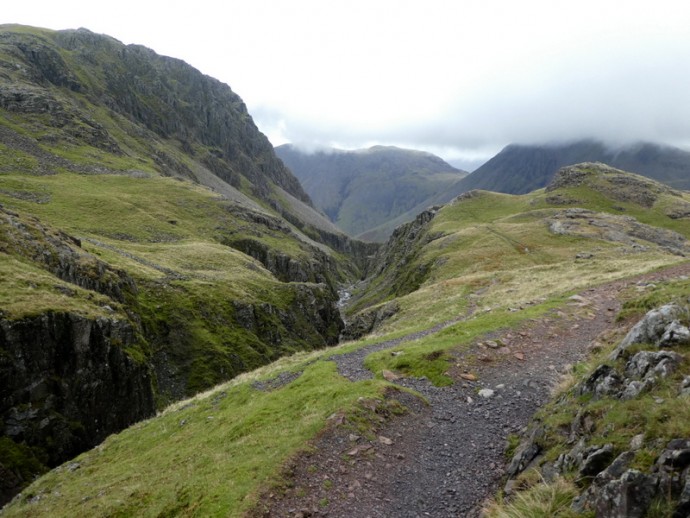 My route to Round How involved turning off the main path of the Corridor Route onto a faint path & then picking ones way up to access it from the South rather than go directly up the crag face. From the top was a view of amphitheatre below Long Pike & the col on the way from Great End to The Pike. 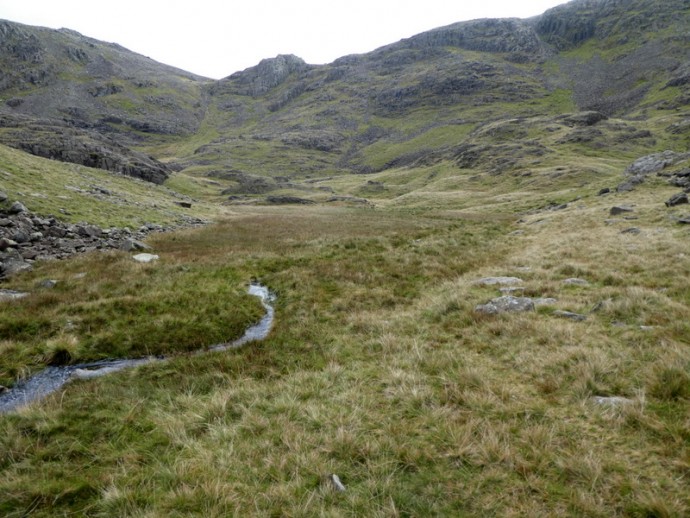 From the top of Round How it was down the grassier back slopes into the amphitheatre & then my route up to the col (left of centre) was to follow the grass by the stream as much as possible until as one got higher there was no option but to go onto stone to the col. Onwards to the stony plateaued top of Great End from by the cairn at the NW tip came my view down along Borrowdale barring, Seathwaite Fell protruding up to block some of it. 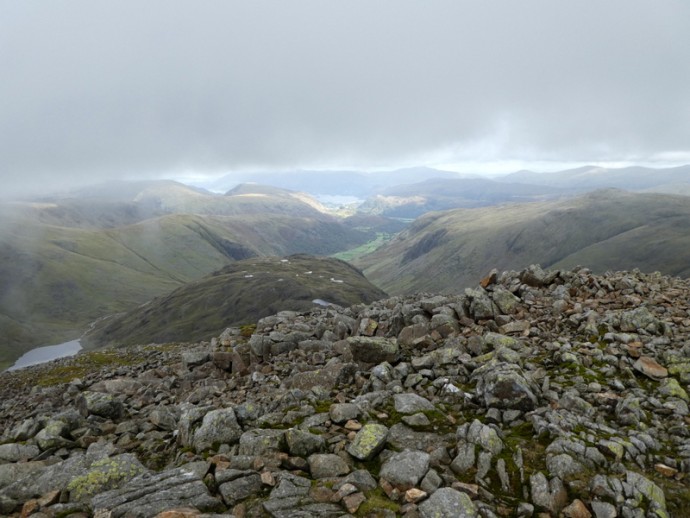 One thing I did come across by the summit cairn of Great End was two inscribed stones the 1st said "Rock From Dollywagon Pike Stocky 12/05/18" & the 2nd "Rock from Grisedale Pike Stocky 5/8/17" personally I find the essentials in my rucksack heavy enough without adding rocks to leave elsewhere. Having negotiated the boulder fields that are the summits & slopes of Ill Crag & Broad Crag in the cloud I then found a more sheltered spot for lunch part 1 before getting back onto the main path to The Pike and approaching the top a lift in the cloud gave me a view of Broad Crag that I'd just down & Great & Green Gables with Hayatcks just showing & multiple ranges beyond. 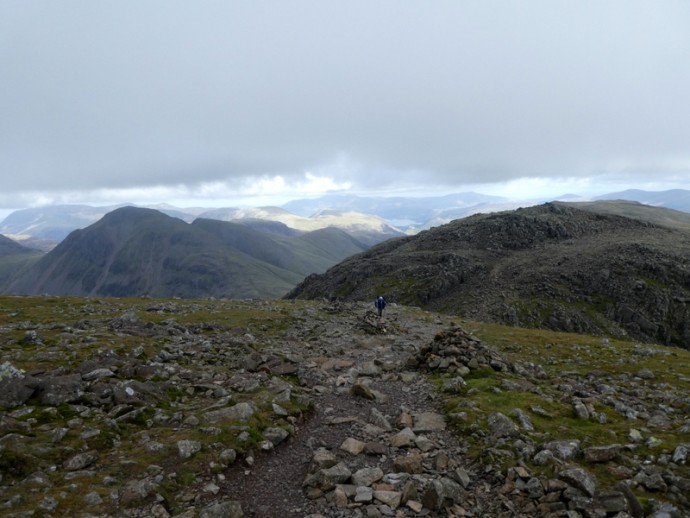 Having reached the summit & done the obligatory selfie on the top which I won't inflict on you, plus having had the 2nd part of my lunch with everyone else and looked out to see nothing at times & the tantalising glimpses at others it was time to move on. I started of on the right path thought I'd gone wrong as I wasn't heading SE as I remembered the general direction from study before hand & seeing things in an opening of the cloud, so turned back before checking things & sorting myself out and getting back on track. When things are clearer like in this pic I took of the Mickledore ridge leading to Sca Fell things are so much simpler. 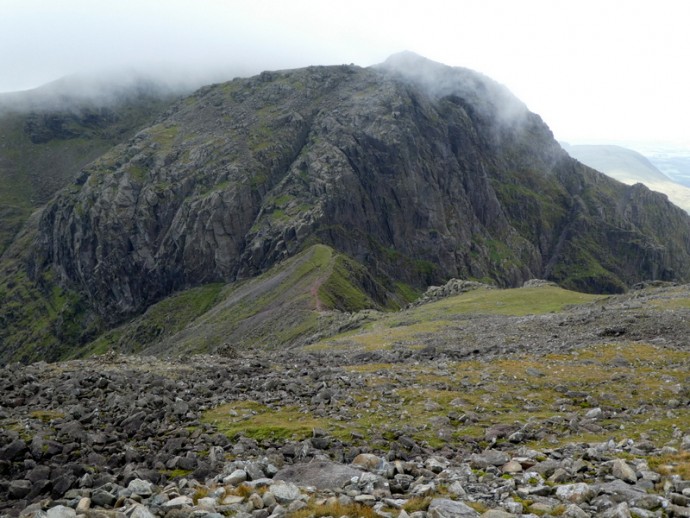 It also shows the crags of Broad Stand directly ahead & Lords Rake the slash in the rock face to the right my route up. Onto the Mickledore ridge itself I got in a nice shot SE to Crinkle Crags etc, part of my next days walk. 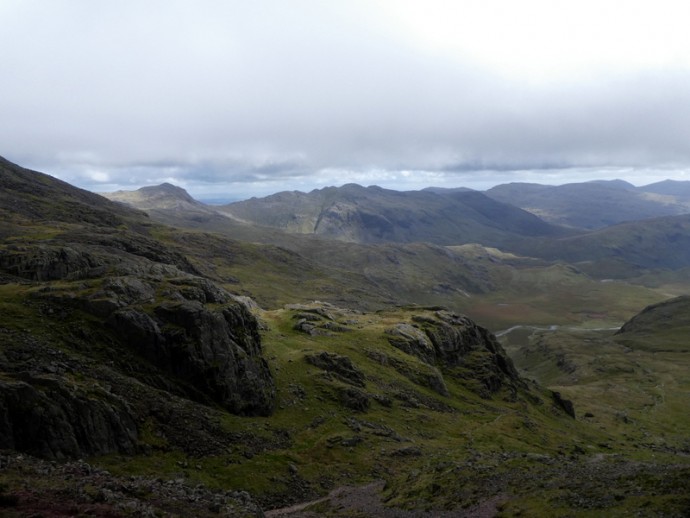 Reaching the end of the ridge I dropped down left a bit to have a look at the Mickledore Chimney but with green alge & water flowing out of it I didn't go in as far as Wainwright & I didn't contemplate the route up Broad Strand outlined by Bill Birkett in one of his books as it sounded not to my liking the words "difficult scramble/easy rock climb" were acceptable to my adventurous side but "a slip would result in serious consequences" were outside sensible side. Having gone back to the ridge & waited for a man to photograph his partner coming up the last stretch from the screes across from Lords Rake, it was across them on a reasonable track for scree crossing to the foot of Lords Rake.

I went up the left side as I find that the bigger rocks often give more resistance than the well worn smaller bits that in this case seemed to be on the right. Yes it requires hands for safety & walking pole can help as a pusher, plus long legs & arms gave me the reach along with a bit of an innate ability to pick a way, progress was reasonable, near the top of the 1st pitch where there were a jumble of large boulders it did require going onto bended knee to achieve the step up. Around the top of the 2nd pitch came a nice view back of part of the Rake, the craggy western face of The Pike & just visible its summit knob & cairn with Ill crag visually next to the cliff face I was against. 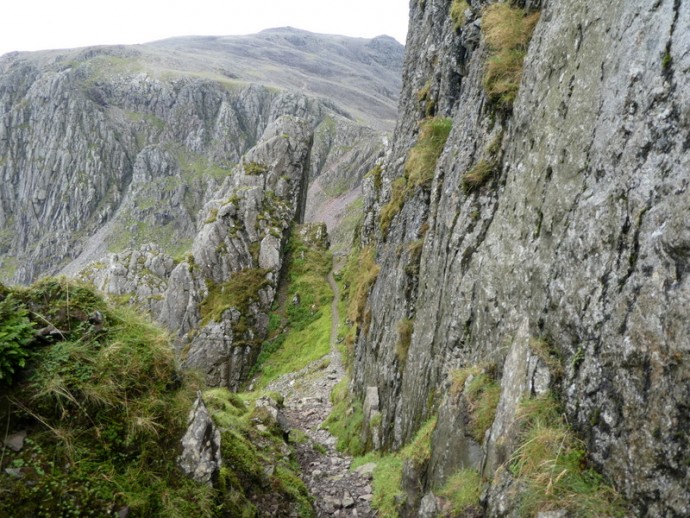 A few seconds further on the ground to ones right dropped away to allow a view down to the head of Wastwater. 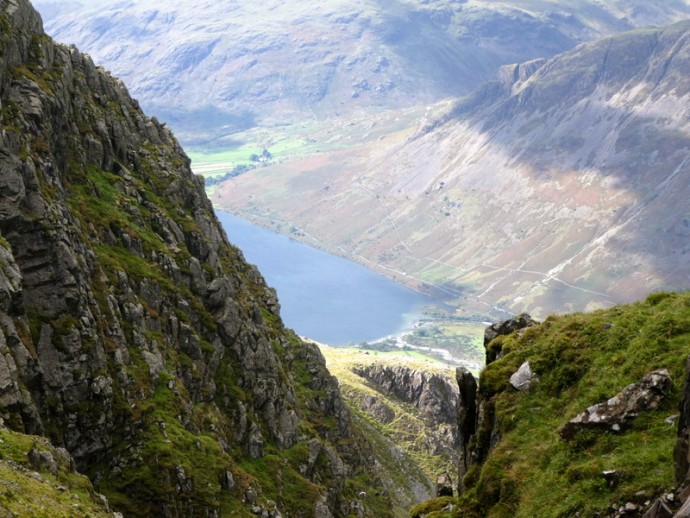 Having reached the end of Lords rake & onto the flat grass ground at its top came another nice view of Wastwater & the fells that drop steeply into it. 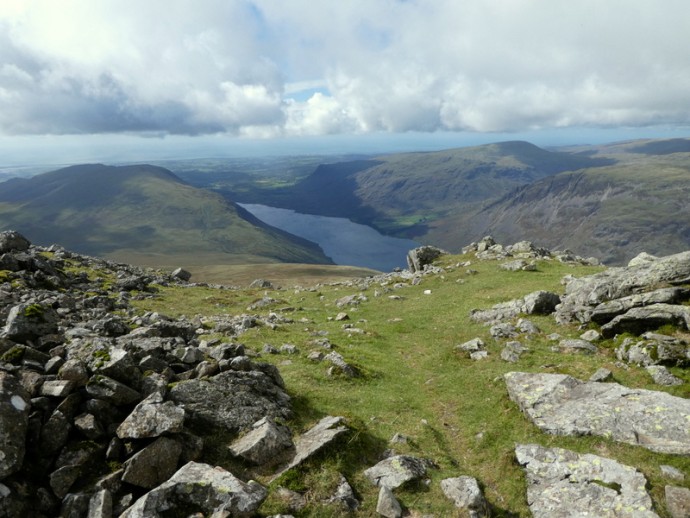 It was then onto Symonds Knott but on the easier going path before getting to its rocky top slope came a view across the slope up of Lingmell that I'd started out the day on over Wasdale Head hidden behind it to Mosedale & its surrounding fells that I'd be walking on day 4 of my holiday. 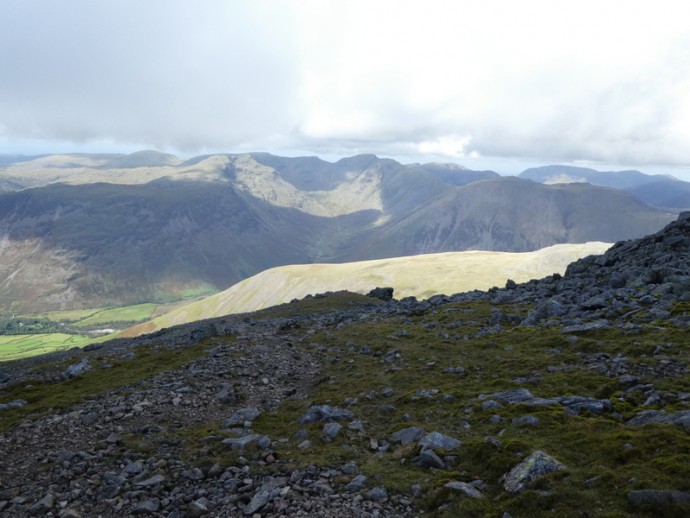 After its top it was on round the edge of the gully where the West Wall Traverse comes up and going NE a bit just to look across to the Pike and the thought struck me that although it's talked about how infuriating for people coming the way I had to see Broad Strand blocking any direct route, going the other way you can't see the drop & detour round to get to The Pike. By know the cloud seemed to have lifted above the tops & the sky was 50% blue giving sun & shade on ground below, but as can so often happen its level dropped a bit later so it was back to very variable views. But it did give me a sun drenched Great Gable & more distant fells behind. 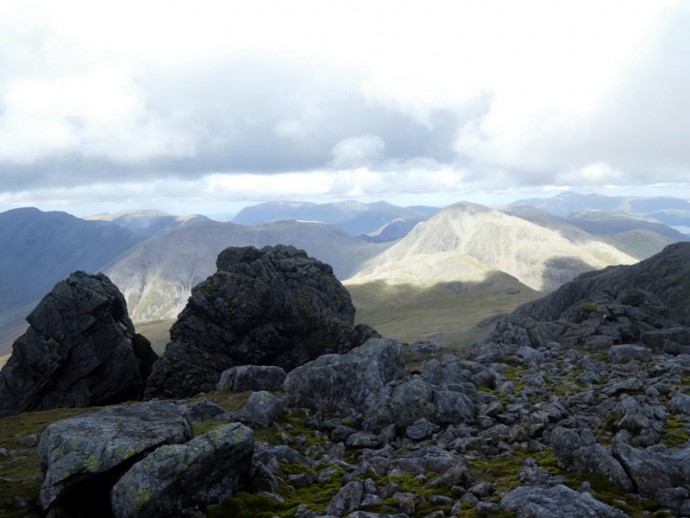 Having gone over the top of Scafell & on a bit came my view down over Slight Side, my final summit of the day, that is what looks like the second peak of the ridge I was on, with the ground to the left dropping over crags to Great Moss & Harter Fell behind and over Slight Side & the upper reaches of Eskdale. 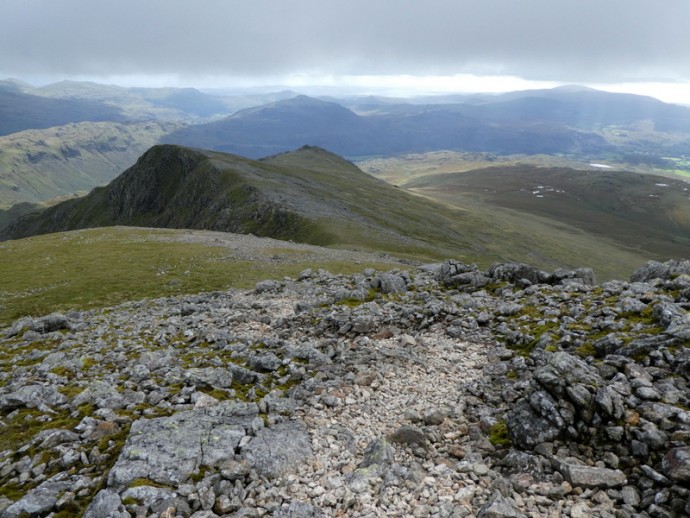 Just after the top of Slight Side I came across a memorial to 2 Polish Pilots from one of the two Hurricanes that crashed into the mountain on 12th Aug 1941. From Slight Side rather than take the longer way down Broad tongue to Burnmoor Tarn & it's associated wet ground I went off track roughly following a route I'd put on my GPS unit to curve round the flanks of Slight Side & Sca Fell trying not to drop to much whilst simultaneously trying to keep below the boulder y scree although at time this was impossible. There was a pit of a path although whether created by man or sheep I don't know, further on around the top of Hatdrig Gill I took this panorama with Yewbarrow centre, Middle Fell to its left, Illgill Head extreme left on the other side of Wastwater and Kirk Fell in the middle distance to Yewbarrows right over the green fields on the floor of Wasdale.

Although I crossed paths that are marked on Waymaps that were going in my direction they weren't distinguishable on the ground from other sheep tracks. Although about halfway down my final drop I did pick up a follow-able path that went on down to the Old Corpse Road that is a stone track and it was halfway along my length of it that I took the pic of the end ridge of Lingmell that I'd gone up 6 hrs earlier.

It was then just a case of navigating access back into the campsite and to its shop, that is actually open to all and back to my car & tent.