Thursday 11th April had been forecast as a bright sunny day in the Lake District, with increasing cloud appearing during the afternoon. As things turned out weather-wise, the morning wasn't quite as good as expected, with quite a bit of cloud around, giving some lengthy overcast spells between sunny intervals. Things improved towards lunchtime, with much less cloud in the afternoon. It was a strange sort of day, with lots of atmospheric UV haze around. - (Which makes photography somewhat difficult by muting colours, and preventing clear views of the distant fells).

Due to other commitments later in the day, this time I wanted a relatively short walk, so decided upon Blencathra. - Ascent by Sharp Edge, and descent by Hall's Fell Ridge. - It's a walk, (or a variation of what are usually longer walks), I've done several times both in summer and winter, (some of which are reported separately here on WalkLakes), and which never ceases to impress.

Starting from a layby on the eastbound carriageway of the A66, near to Doddick, I walked generally north-eastwards, picking up the footpath behind the White Horse Inn at Scales. Then contouring around Scales Fell towards Mousthwaite Comb. Approaching Mousthwaite Comb, the path takes a more north westerly direction, running parallel with River Glenderamackin towards Mungrisdale Common. Eventually that path reaches Scales Beck, at which point I crossed the beck and made the short ascent up to Scales Tarn.

From the tarn, I made my way up to the start of Sharp Edge, stopping for a bite to eat and a drink before continuing. Sharp Edge was in fine condition, with bone dry rocks and very little wind to consider. It was quickly followed by an enjoyable scramble up Foule Crag, and then owards to Blencathra summit, with a quick detour onto the plateau of Blencathra's "Saddle", to photograph the White Cross Memorial.

The replacement for the "stolen" OS trigonometrical station ring had recently been installed at the summit, so I took a few photos before descending via Hall's Fell ridge, back to valley level at Gategill. Once back in the valley, it was a short walk of about half a mile or so along the A66 back to Doddick and the car. A close-up shot of Sharp Edge, taken from the same viewpoint: - 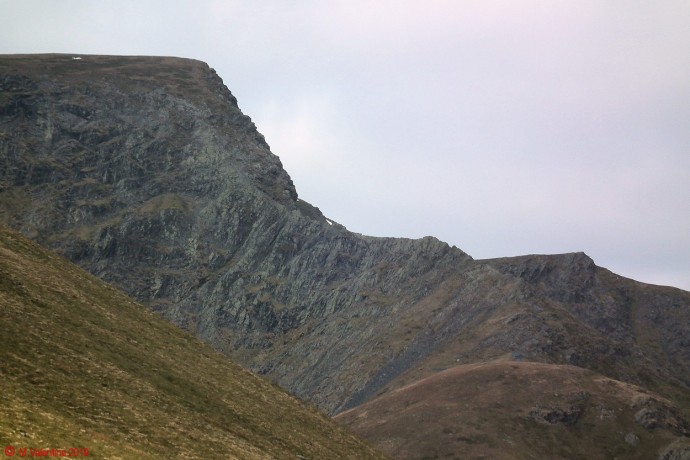 Looking up Scales Beck, with Blencathra peeping out beyond. (At this point, Scales Tarn is still out of sight behind the "vee" at the top of the beck): - 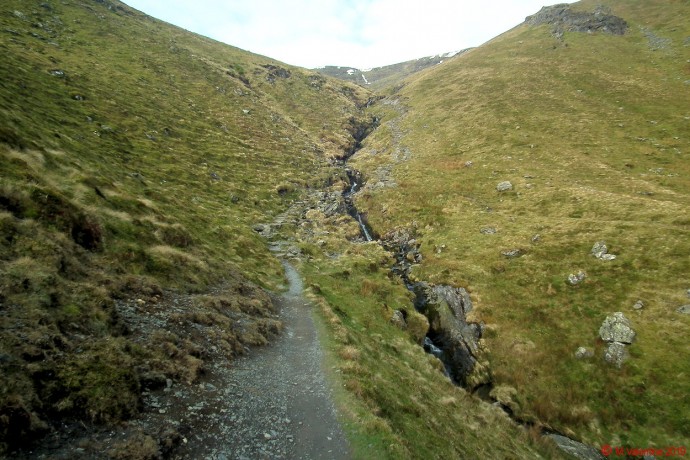 The view across Scales Tarn to Tarn Crags: - 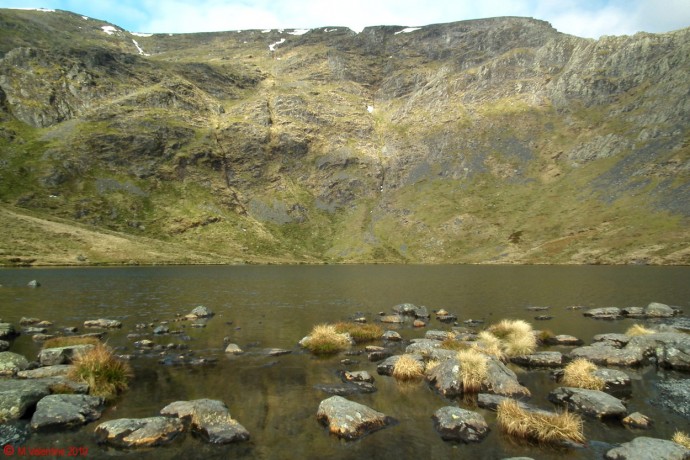 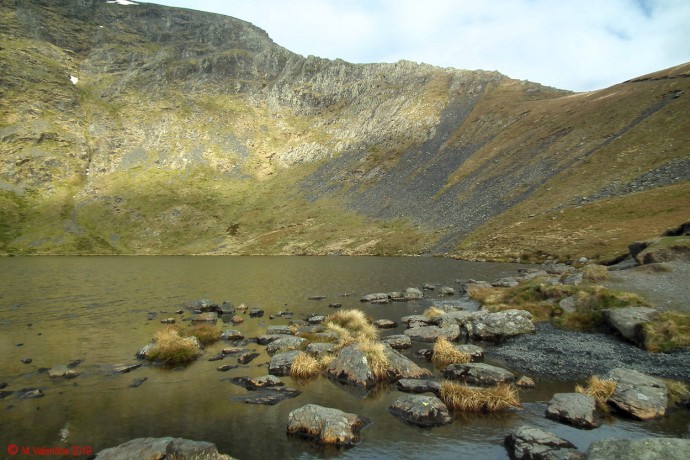 A close-up of part of Sharp Edge, from the same viewpoint: - Looking back down, from the first part of Sharp Edge: - Looking back across Sharp Edge, from slightly further along: - 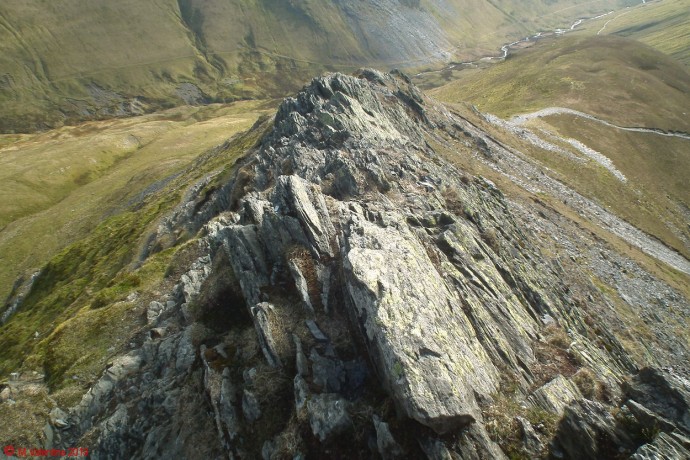 Scales Tarn, with Scales Fell beyond, from about half way across Sharp Edge: - 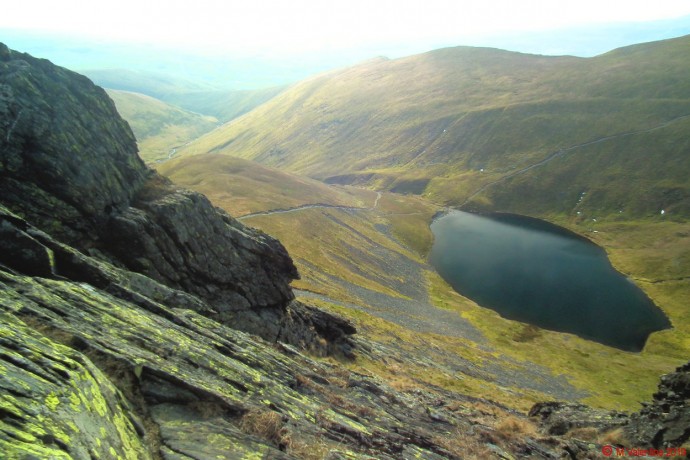 Another shot across Sharp Edge, with (the south-western, and not very craggy! side of) Bannerdale Crags beyond: - 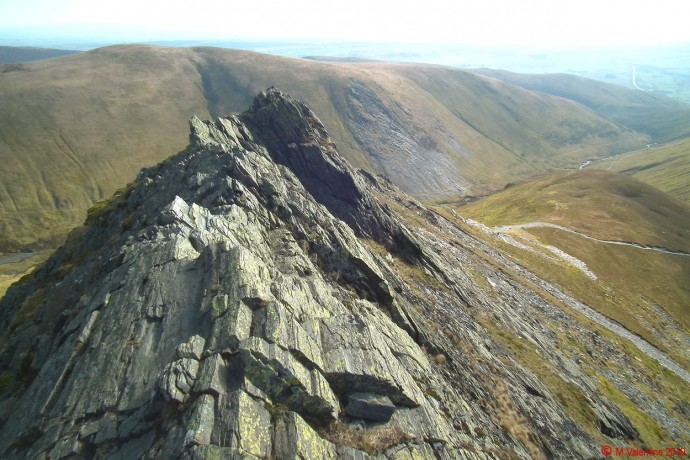 Another shot across the Edge, from still further along its length: - 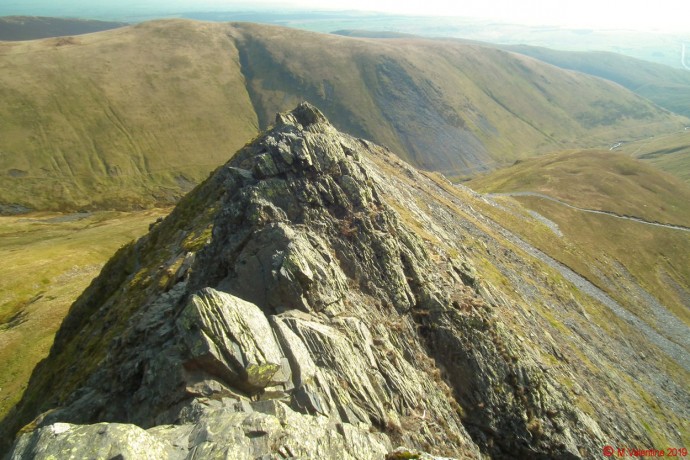 Yours truly on Sharp Edge: - 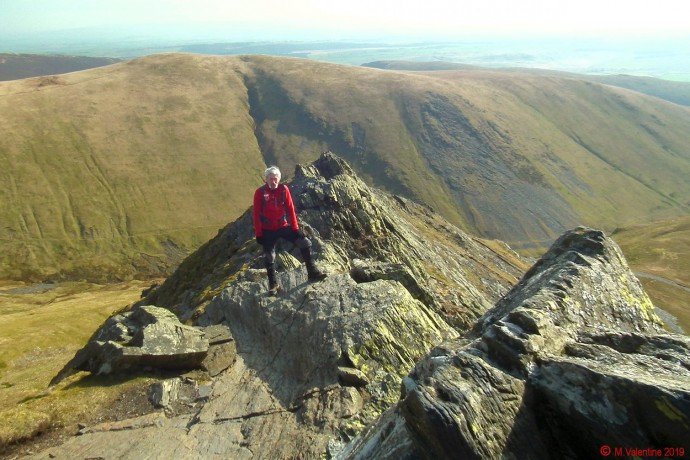 Looking back across Sharp Edge, from just beyond the "bad step": - 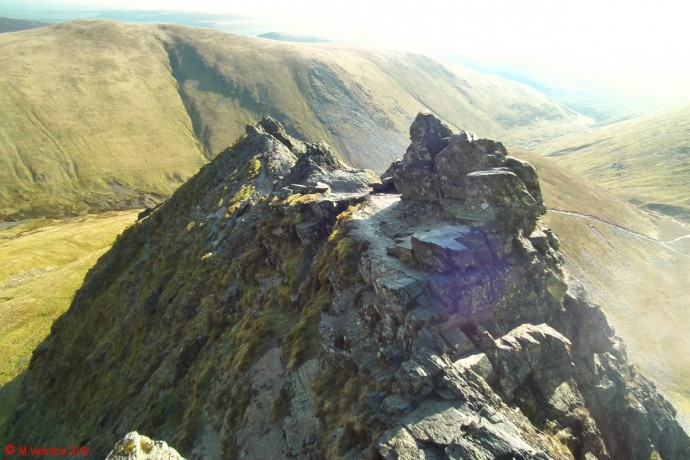 Scales Tarn and Sharp Edge, with Bannerdale Crags in the distance. (Taken from Blencathra's Saddleback ridgeline): - A close-up look back at Sharp Edge from the same viewpoint: - 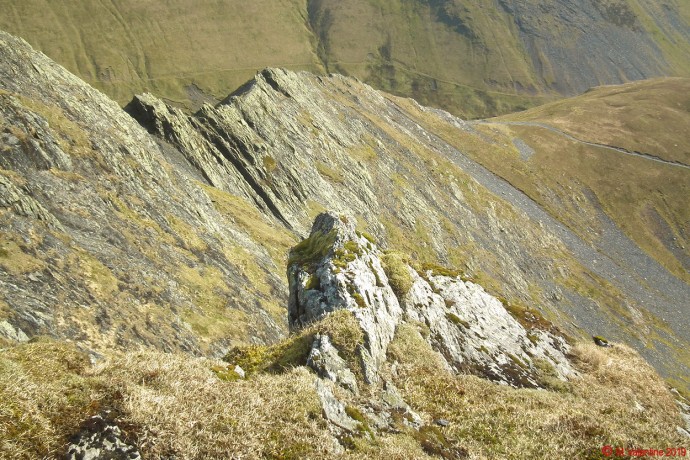 A last look back to Sharp Edge, from further along the Saddle ridge: - The White Cross Memorial on Blencathra's "Saddleback" plateau, with Skiddaw in the background: -

Looking towards Derwentwater and the fells beyond, from Blencathra summit: - The newly installed "replacement" for the OS Trigonometrical Station Ring. (The original ring, of which there are photos in this walk report: - viewtopic.php?f=2&t=505 was stolen from this spot in 2018): - 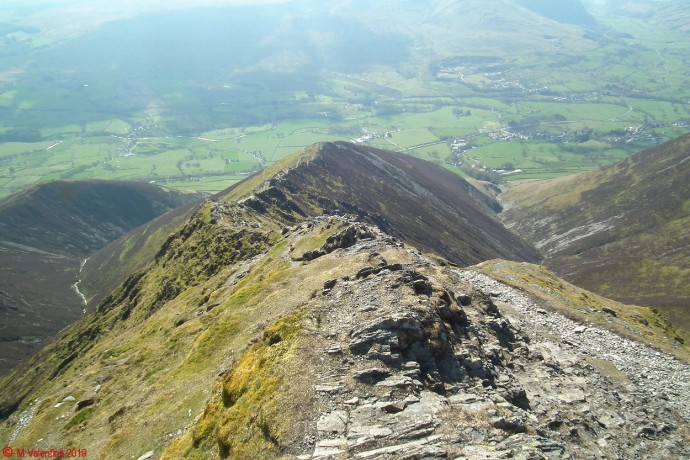 The view across the ridgeline leading to Doddick Fell. - Taken from near the top of Hall's Fell ridge: - Looking towards Derwentwater, across Gategill Fell. - From Hall's Fell ridge: - A much zoomed-in shot showing what's left of the winter snow on Helvellyn, from Hall's Fell ridge: - 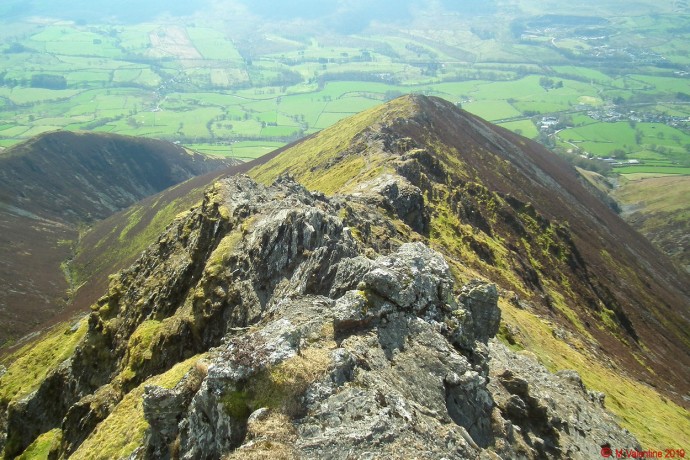 Looking back up Hall's Fell ridge towards Blencathra summit: - Almost back down to valley level, and the final shot of the day. - Looking up to Hall's Fell ridge and Blencathra's summit, from the old and long abandoned lead mine area at Gategill: - All in all, another great walk in the Lake District!

Excellent report. I hope you don't mind by I stole your report and photos of the new Trigonometrical Station Ring and turned them into a blog post.

No problem! - I had seen your blog and had noticed that my "trig-ring" photos had been used, but that's fine with me.