Blencathra up by Hall's Fell Ridge & the length of the top, plus Souther Fell

The basic route from Scales was along the bottom a bit then up Hall's fell ridge, but rather than just doing all the Wainwright's I skipped Mungrisdale Common, since descriptions rate it as poor & it sounded just like some of my Peak District walks to get to, instead I headed to the bit of a peak SW of Hall's Fell top that is Gategill Fell Top, before heading NE mostly along the top or by the edge adding Wainwright's, but with a deviation to see the top of Sharp Edge & then on to peer down on a bit of a jewel of Bowscale Tarn before dropping down to Mungrisdale & then walking along the road to access Souther Fell where my original plan had been to walk back round to the NE end of it before heading up but instead with time getting on from my point of view, I took the path that angled up the side as it looked shorter.

The day was a nice sunny day with enough wind to cool things, but still a haze for far distant views. The other thing I'd say is that it would be better to walk the top the other way so that more faces of crags that you see are catching the sun rather than in the shade.

Paths varied between motorway like on top of Blencathra between the popular bits, smaller but defined tracks as one headed onto the quite part & around the base, the one major wet area is above the headwaters of Bannerdale Beck where the path on WayMaps stops then begins again as people fan out to find a dry route, stick to the edge is what I did. The path down Raven Crags into Mungrisdale is narrow & cuts through 3ft high gorse whereas the one up Souther Fell cuts through bracken up onto a damp slightly peaty ridge. Hall's Fell Ridge is a scramble, I took the bypass path quite a bit of the time to make quicker progress but was popping up top as well. I was on the top of the ridge at the point where the crack cuts through and it scared me a bit & I'd say this bit is harder than anything on Striding or Swirral Edges, I resorted to sitting astride the top & easing forward into the gap. Also with the scaredness before & relief after forgot to take any pics of that section.

Being early (I was off walking at 8.01) at the small car park at Scales / Comb Beck, I was first there until Andrew arrived who was going up Sharp Edge, but 100yds after setting off I had a thought that I hadn't locked the car & called back to ask him to check & I hadn't, after walking back & locking it I told Andrew that I blamed him in a humorous way, as we were chatting so much, but with hindsight some of the blame must go to Paul & Beth since I was extolling the virtues of WalkLakes

. I did meet Andrew again on top heading the opposite way and we wondered who'd be back 1st – I was. Having given you a humorous bit now a serious one, I was joined at lunch on Hallsfell Top by an ex solider & he said about 8 years back he'd gone up Sharp Edge & gone left round a boulder and found himself on a ledge only a few inches wide, over a precipitous drop that had scarred him & Andrew said that it was the last bit where Sharp edge becomes Foule Crag that was hardest. Upto the 430m contour or 1/5th of the way up Hall's Fell distance wise, looking SW

Slightly under ½ way looking across to Middle Tonuge/Gategill Fell 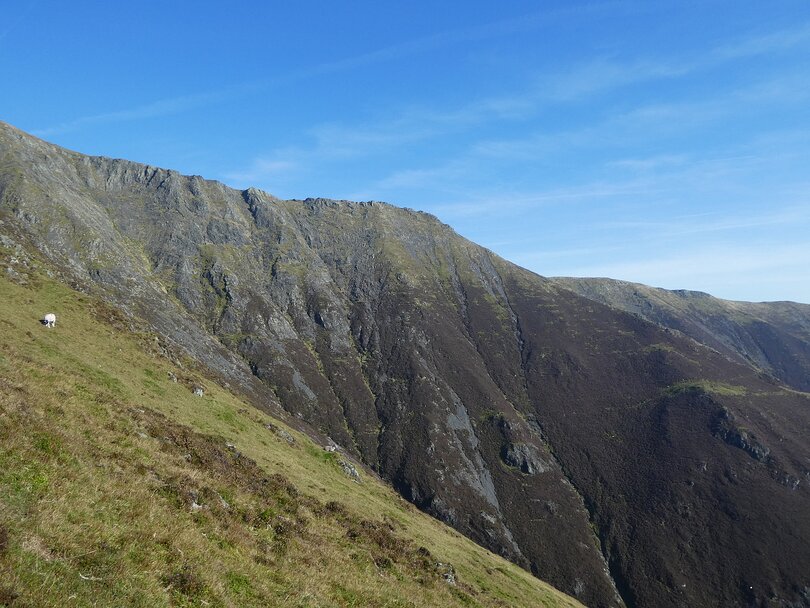 Hall's Fell about 2/3rds up & the ridge gets harder. Nearly at the top & things get easier, looking back down the ridge & over to Clough Head Pretty much at Hallsfell Top, looking over Doddick fell to the mass of Scales Fell centre At the top of Blencathra, the top with no name, it's not marked on maps but it must be Gategillfell Top that the ridge goes out to From Gategillfell Top, Blease Fell the western end of Blencathra Around where the middle grade path from Scales Tarn comes up, Scales Tarn & the scar of a path up to Sharp Edge with Bannerdale Crags over 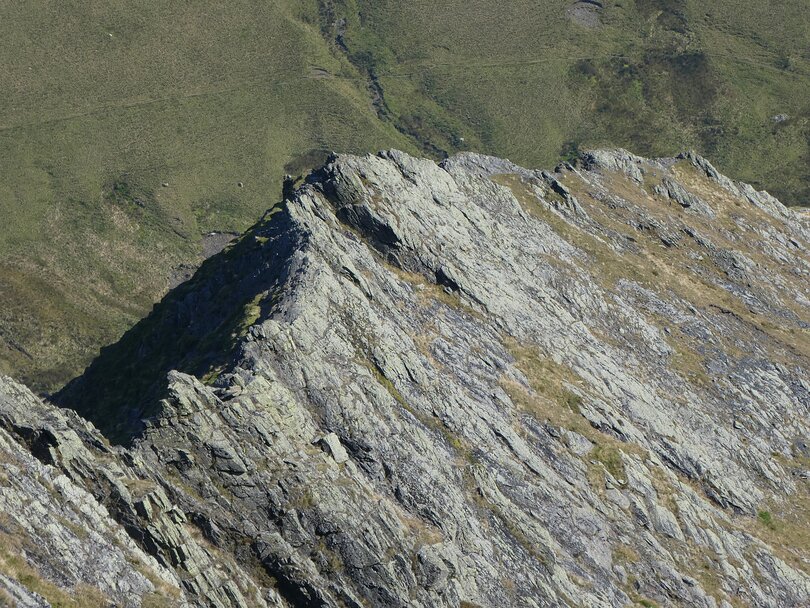 Looking down on Sharp Edge On top of Atkinson Pike, it didn't look much like a pike from Hallsfell Top, my path onwards on the right & the flatish Mungrisdale Common off left Descending Atkinson Pike above Foule Crag the view across to the east side of Skiddaw where I'd been the previous day. A few minutes after moving off from the little rocky knoll above Foule Crag where I'd stopped for lunch part 2, Looking at four people carefully navigating Sharp Edge Halfway between Sharp Edge & the path that comes up the north side of River Glenderamackin, looking back at Sharp Edge & Foule Crag, this is what I meant about coming the other way so the crags were more illuminated by the morning sun, it also made Atkinson Pike look like a pike From the summit of Bannerdale Crags, the saddle of Blencathra or Saddleback, with the little knoll I refered to in pic 15 right a bit of Atkinson Pike that is the northern end (right in pic) of the saddle Having moved off from the summit of Bannerdale Crags, the actual crags of the fell From the head of Bannerdale looking down its length to Souther fell sitting across its end, that was my last fell of the day The hidden Bowscale Tarn with Carrock Fell over the valley, you have to be near the edge to see it & it only adds a few minutes walk to the route but & anyone like the man I saw heading up the ridge I was going down, directly to the summit wouldn't have seen it Getting into the area of Raven Crags as the ridge drops to Mungrisdale, the view along the length of Souther Fell & the river Glenderamacking shining white, plus the ridge end I'd planned to go up From around where the SW end of Souther Fells starts to drop more, another view of the saddle with Scales Fell left & White Horse Bent the blunt end of Bannerdale Crags.

Colin M likes this post
permalink
WalkLakes recognises that hill walking, or walking in the mountains, is an activity with a danger of personal injury or death.
Participants in these activities should be aware of and accept these risks and be responsible for their own actions.