Monday 21st September was forecast to have lengthy sunny periods and fairly light winds, so another trip to the Lake District was made in order to visit Haweswater Reservoir – a place that I hadn't been back to in over thirty years.
As things turned out weather-wise, there was quite a lot of cloud hugging the higher slopes.
At those higher levels, the mist kept rolling in and then clearing, time and time again. A fairly common occurrence on the high fells. – Sunshine one minute, and thick mist the next!
That situation prevailed all morning, meaning that I had some quite lengthy waits for clear spells to take photos.
(Note that the Naismith time shown for this walk does not reflect the several hours of time spent waiting around!).

My planned walk started from the Mardale Banks / Whiteacre Crag area, ascending via the Old Corpse Road to the plateau near Ritchie Crag, and from there, taking the Selside End ridgeline up to Selside Pike. Then, via the survey pillar, onwards to Branstree.
From Branstree, a descent to Gatescarth Pass, entailing the passage of an extremely boggy area just where the Branstree fence line meets the main Gatescarth Pass track.
Then upwards to Harter Fell, before descending to Nan Bield Pass, and then back down to valley level via Small Water, before passing through Mardale Head car park and a final mile or so along the road back to the car.

GPS Track of the route walked: -

Old Corpse Road signpost. (At the start of the walk): - 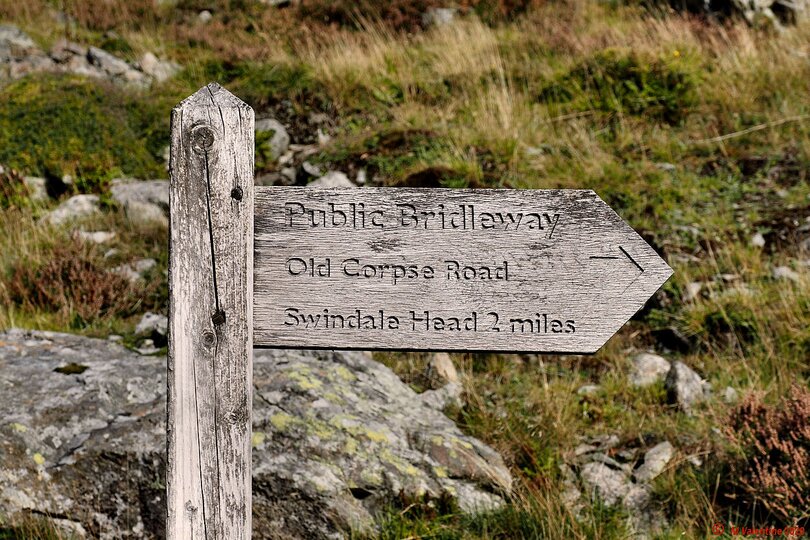 Cloud shrouded Harter Fell, and the view up Rough Crag to High Street. – (From the old peat huts viewpoint beside the Old Corpse Road): - 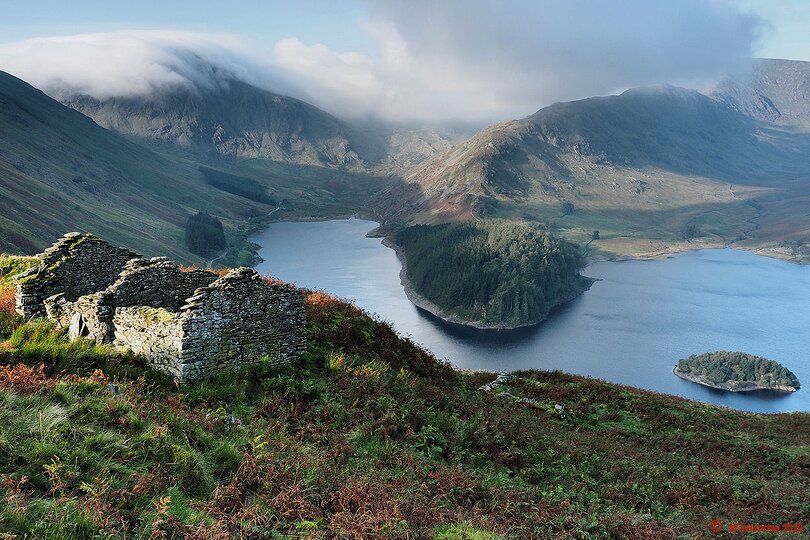 The summit shelter on Selside Pike, with Harter Fell and High Street, (beyond Branstree, on the horizon): - 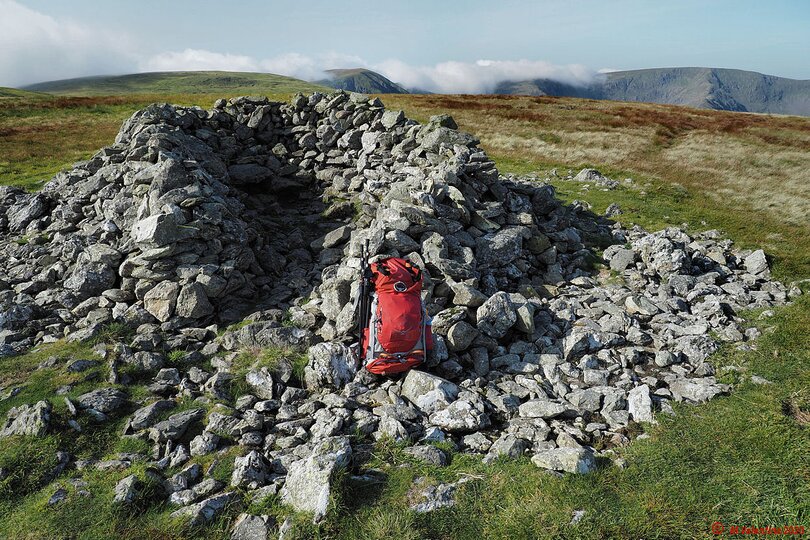 One of the "sighting pillars", used for surveying purposes during the construction of the Haweswater to Manchester aqueduct: - 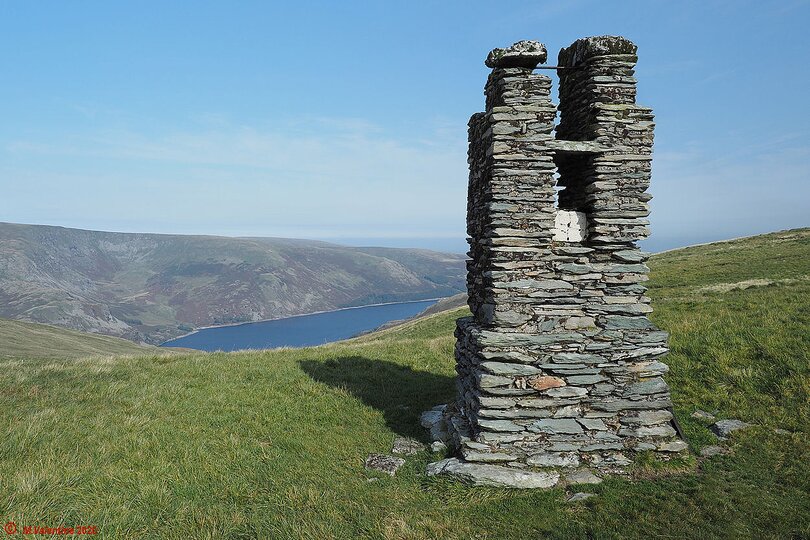 Looking towards Artle Crag from the survey pillar. – One of the Artle Crag cairns just about visible through the incoming mist: - 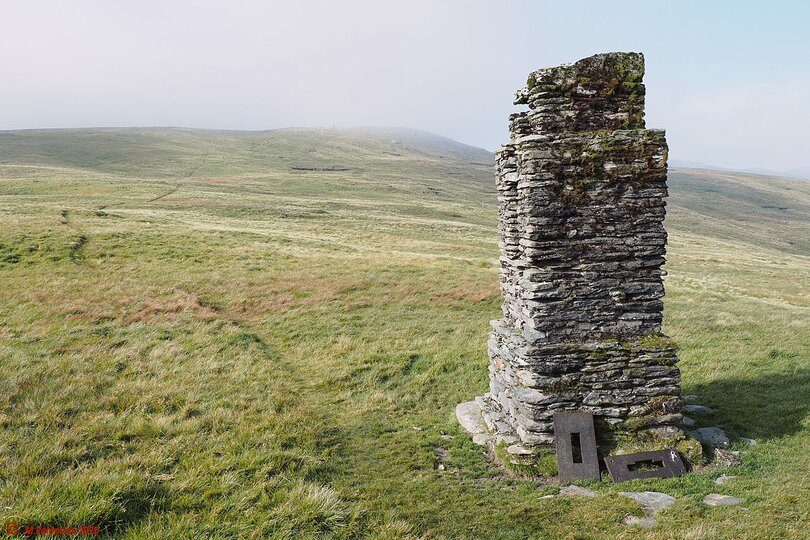 The two Artle Crag cairns are approximately fifty yards apart. – The mist getting thicker by the second! 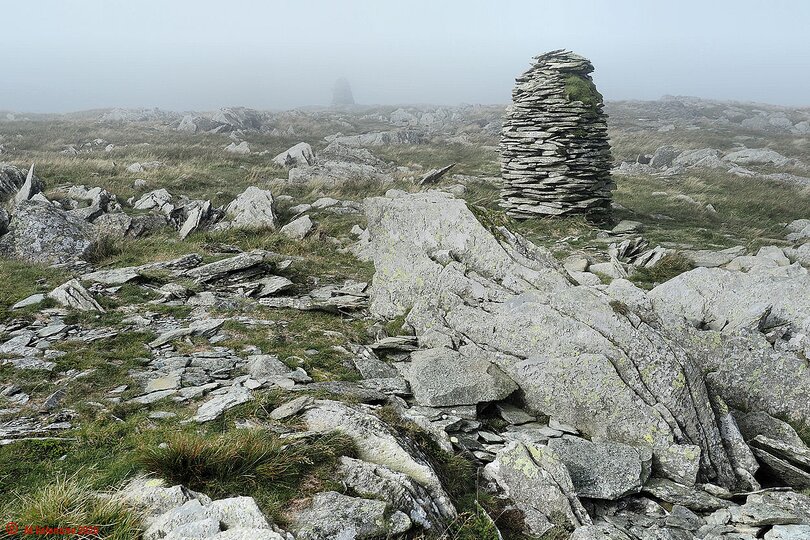 Branstree summit Ordnance Survey Trigonometrical Station. – A real pea soup mist just now, so no views to be had from here! 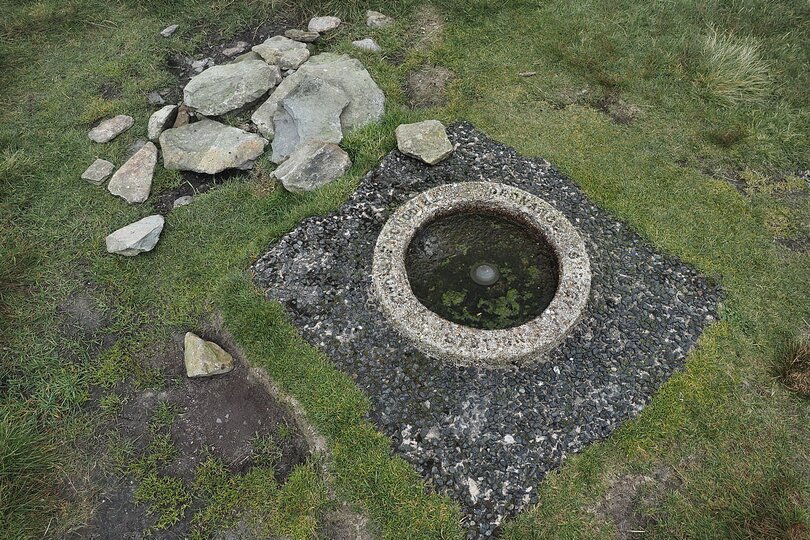 The route from Branstree summit down to Gatescarth Pass. – Not much to be seen here today! 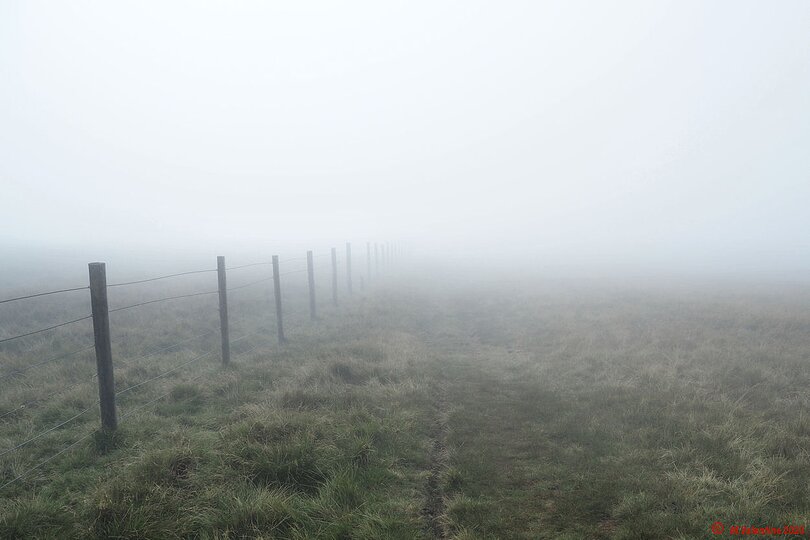 Almost at Gatescarth Pass, and the mist begins to blow through! 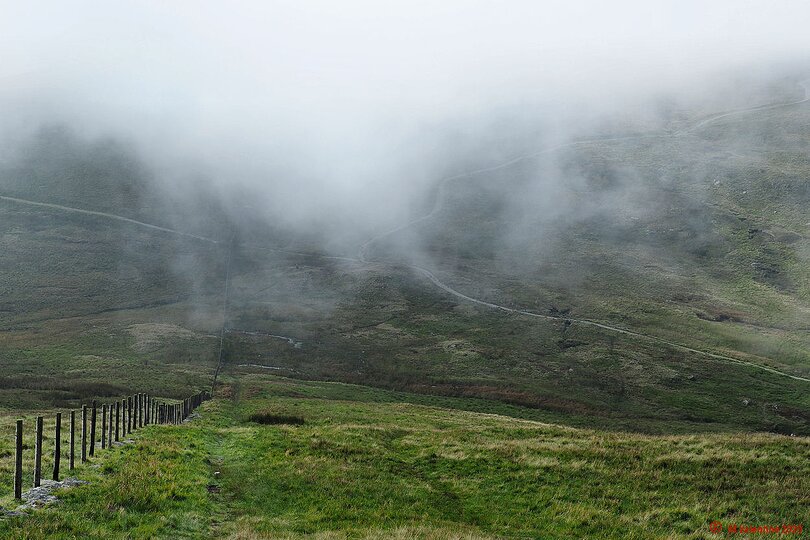 The view towards Haweswater from the flanks of Harter Fell. – Now entirely mist free: - 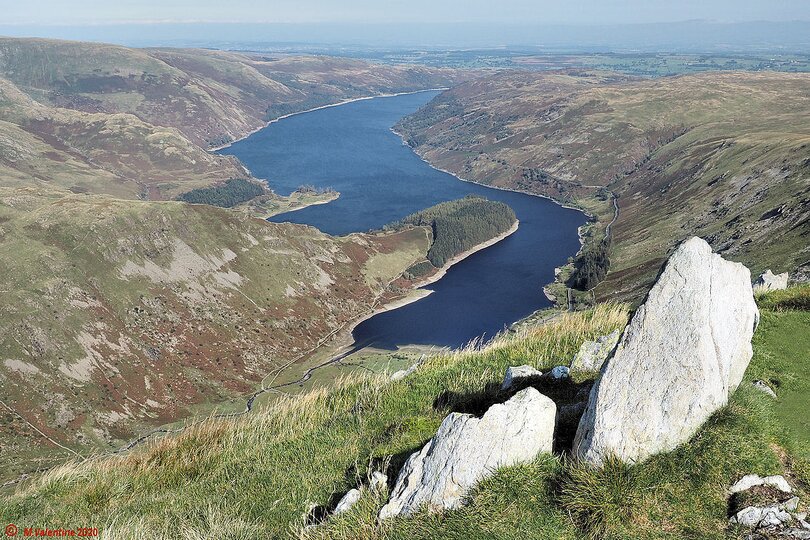 Looking over to my right from the same point, Selside Pike is also clear, but still plenty of mist around on Branstree: - 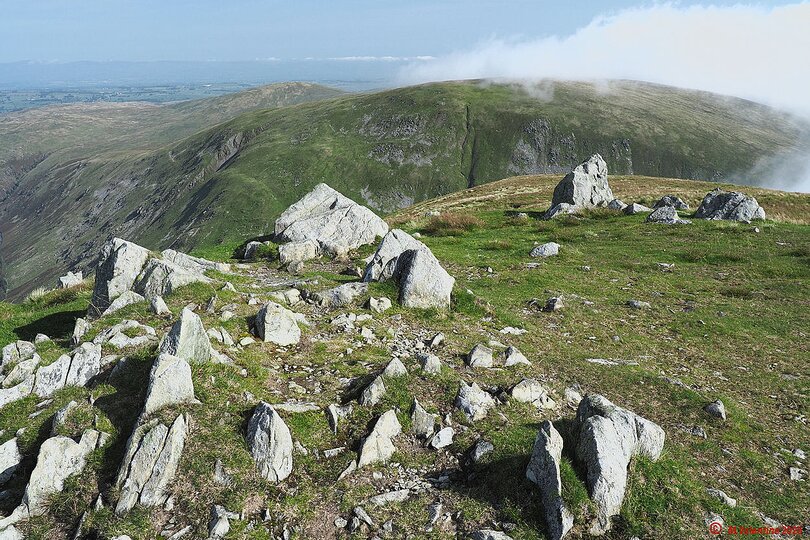 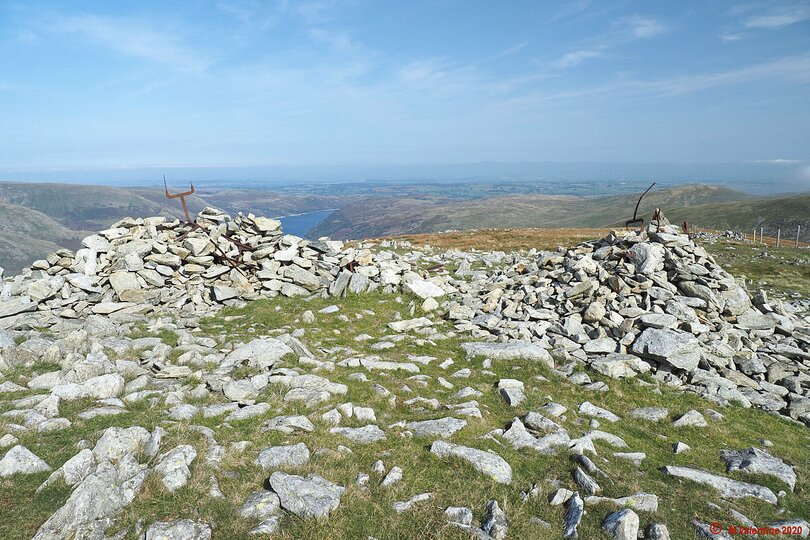 A few minutes later, and up at the summit, the mist stubbornly lingers.
Harter fell summit cairn, with the just about visible fence-line leading towards the two piles of stones from where I'd just walked : - 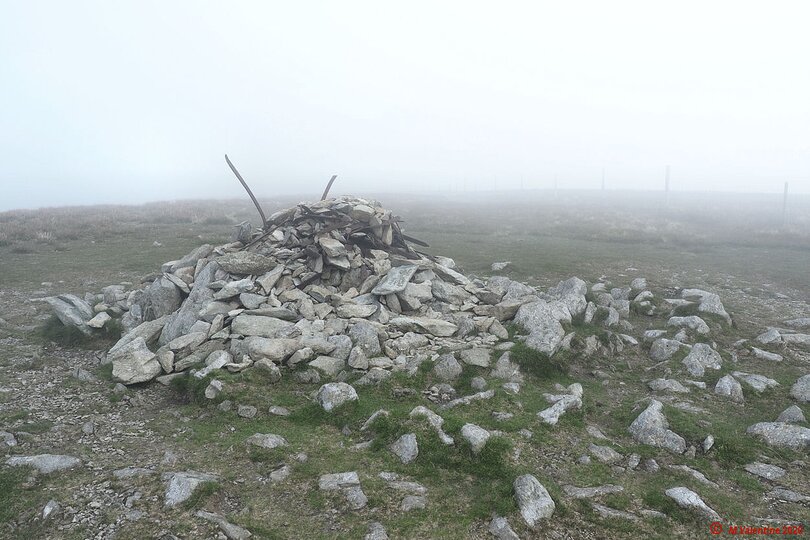 Looking down to Small Water from a point near Harter Fell summit: - 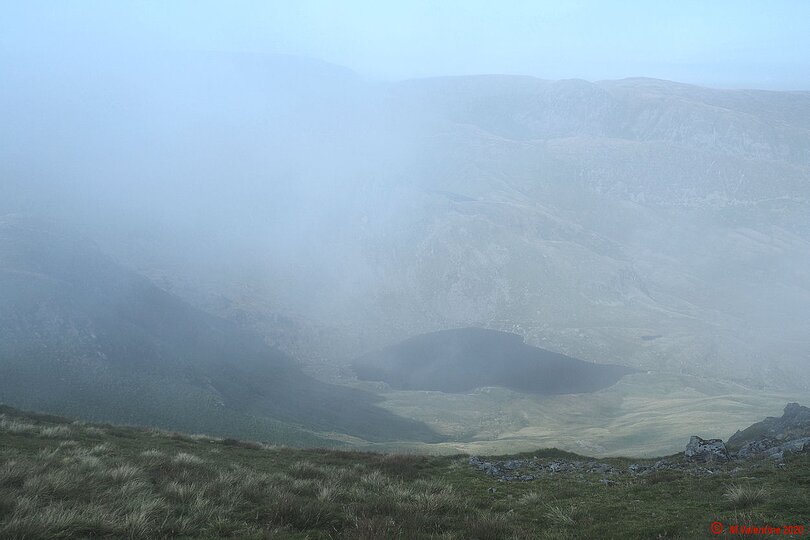 A few seconds later and the mist clears, fully revealing Small Water, with Piot Crag, Mardale Ill Bell, and High Street beyond: -
(Just a glimpse of Blea Water can be seen in the corrie beyond Piot Crag). 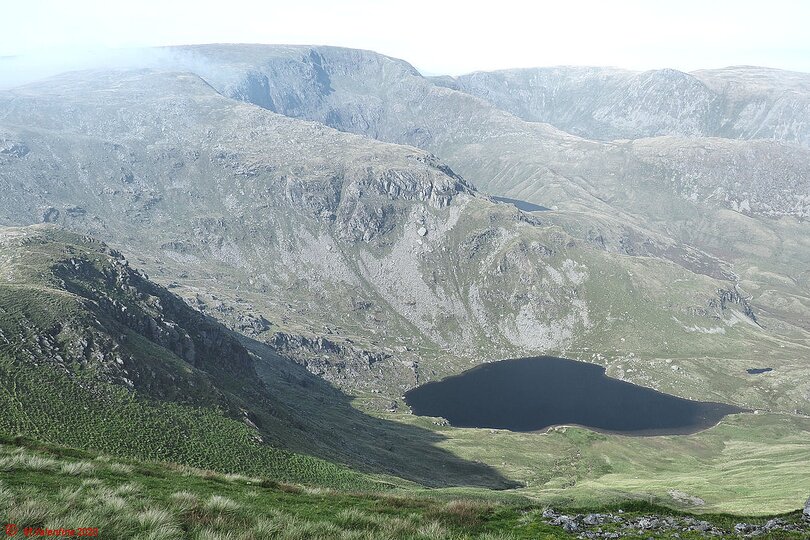 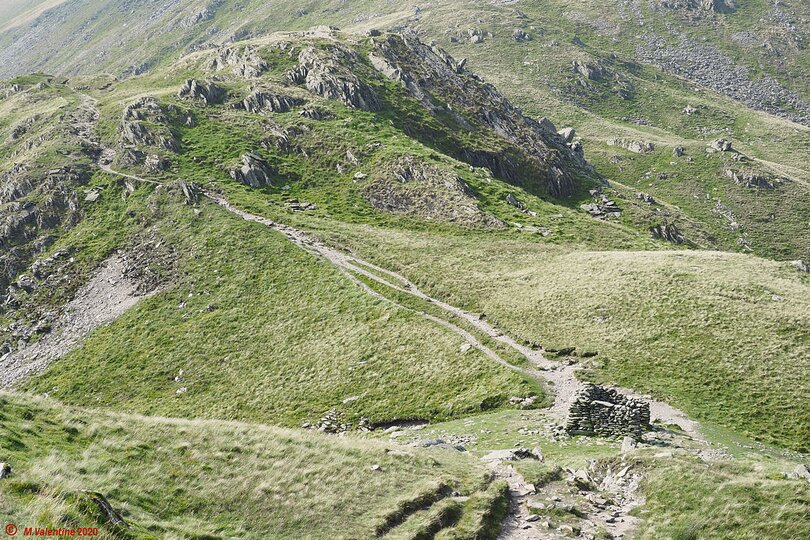 Looking in a south-westerly direction towards Kentmere Reservoir. Yoke, Ill Bell, and Froswick almost lost in the haze: - 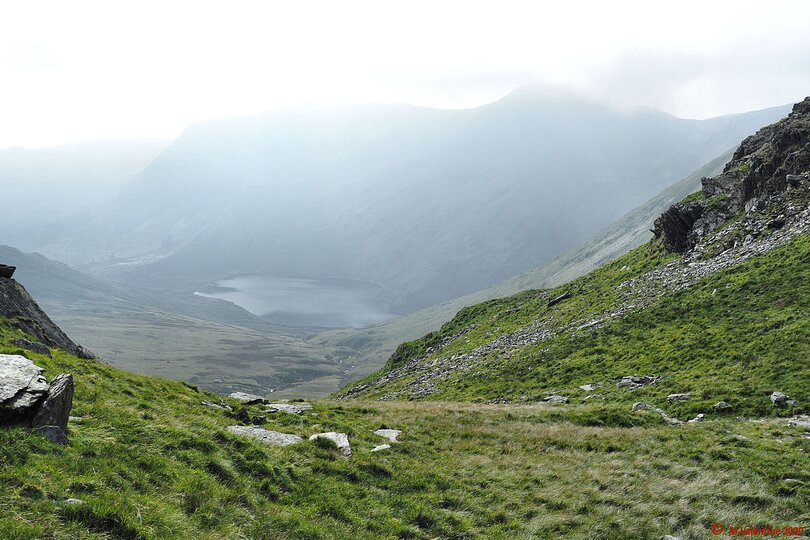 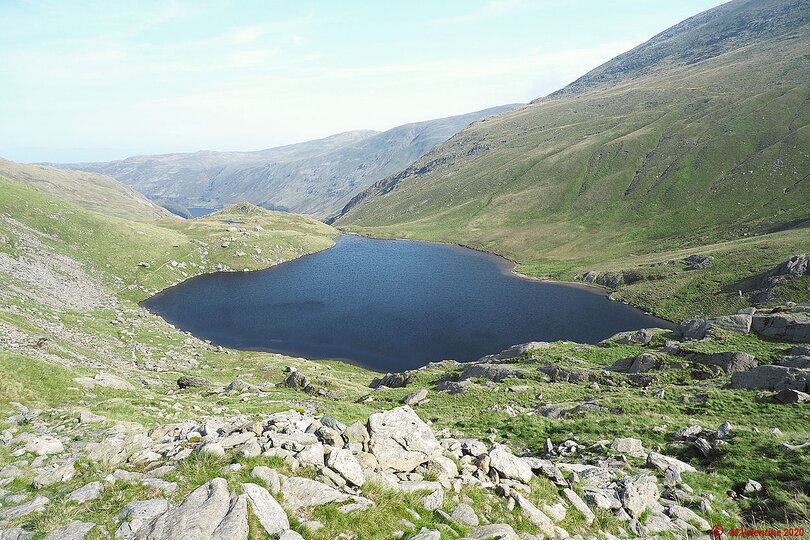 Two of the stone shelters located immediately beside Small Water: - 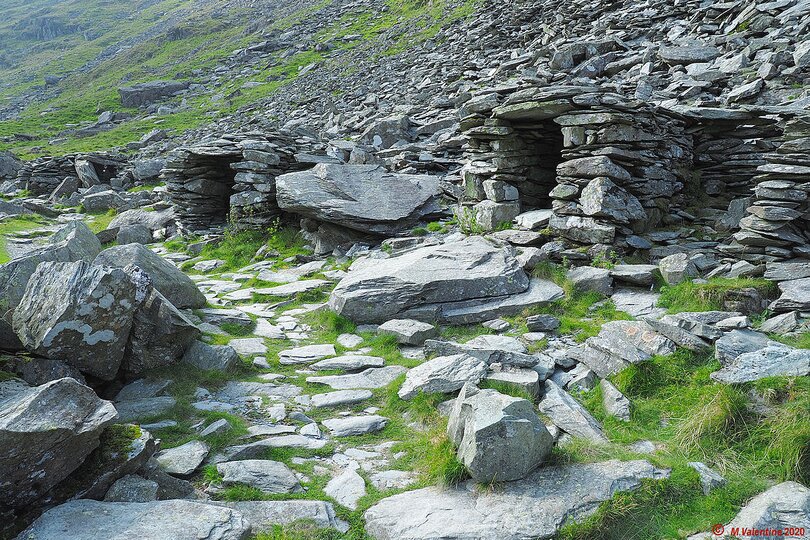 Looking down Small Water Beck to a distant Haweswater: - 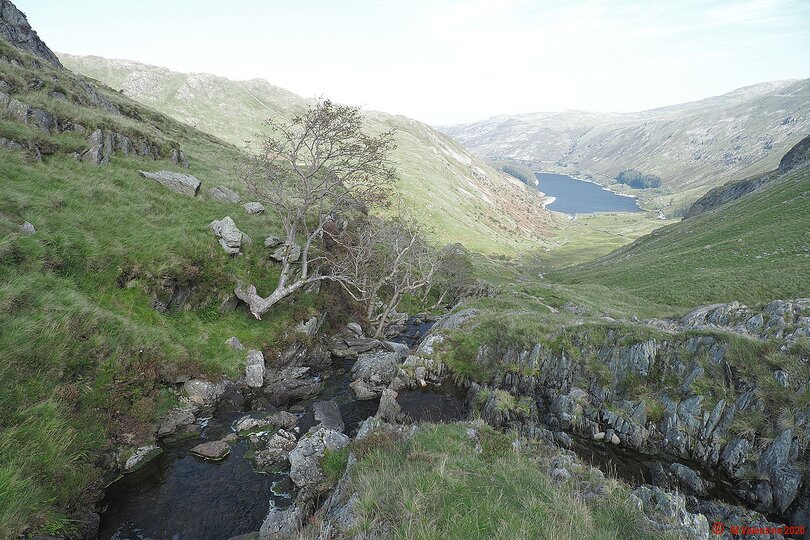 Approaching Haweswater, with the Mardale Head car park over to the right: - 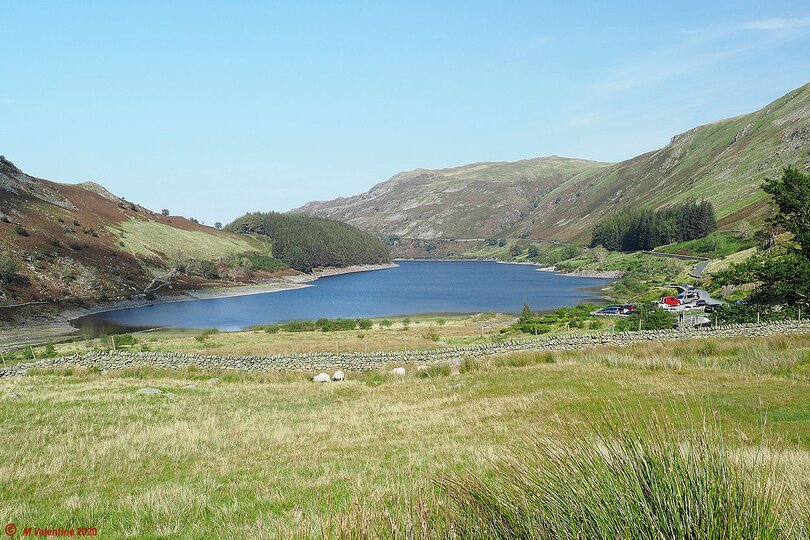 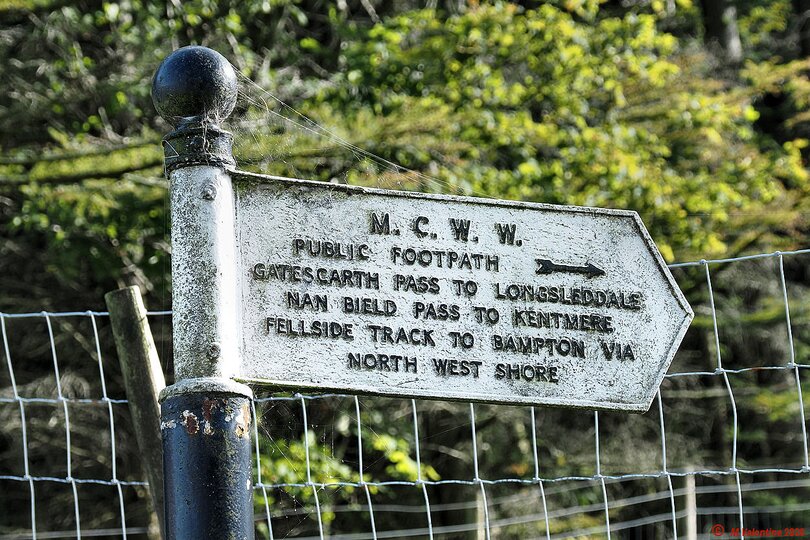 A slight glimpse of what remains of one of the roads leading to the long lost flooded hamlet of Mardale Green: - 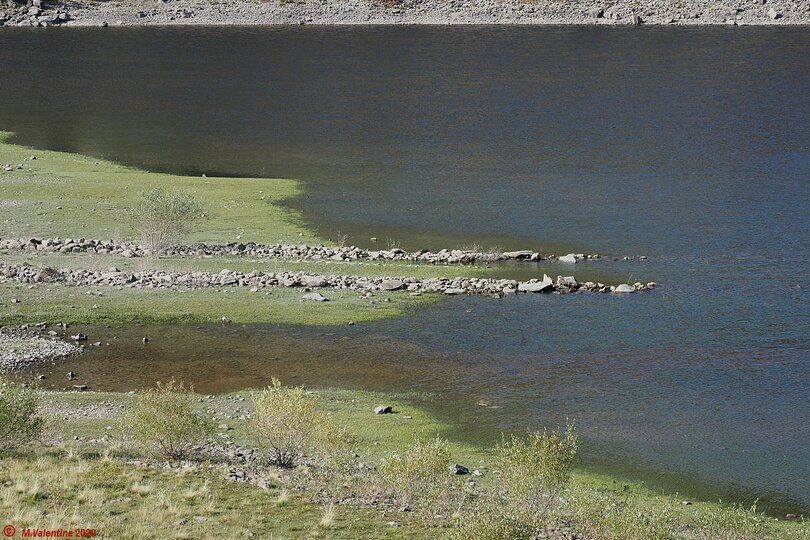 Looking across to Wood Howe. - Originally a small rocky knoll at Mardale Green. Now made into an island by the raised water level due to the construction of Haweswater reservoir: - 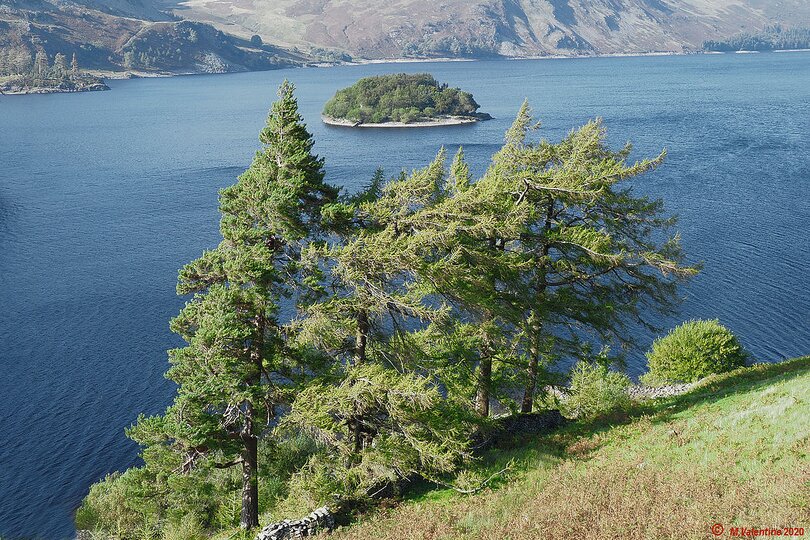 Still walking towards the pull-in where I'd parked the car, and a final shot for the day - A closer look at Wood Howe; - 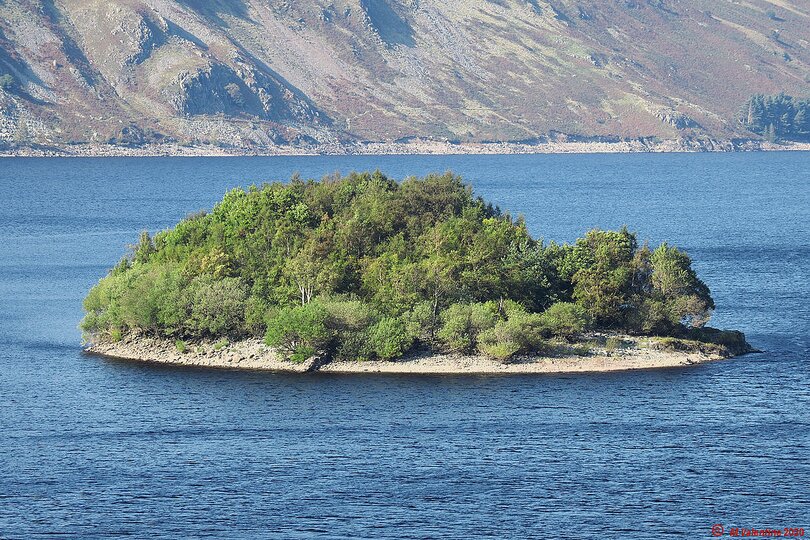 All in all, a great walk in one of the less frequented areas of the Lake District.