With me planning on skipping my lakes camping holiday this year due to various covid reasons, I've been planning more day trips/hikes so aiming for somewhere I've seen quit bit I headed for Mynydd Preseli which translates to Preseli Mountains although they are hills, but not wanting to do a straight there & back on the same route picked plotted something to go over all the little hills south of the main ridge, but still giving me the option of cutting back shorter on the road, as I was also wanting to test my endurance on the biggest walk I've done & although I managed it, I should have gone slower.

An early start near Crymych saw the cloud unfortunately low on my 1st top Foeldrygarn that also sports an iron age hill fort. 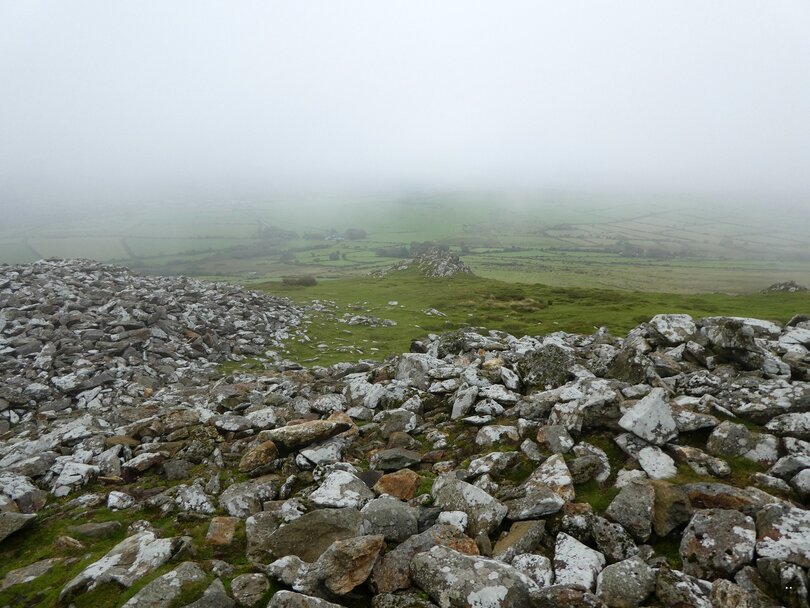 My limited view out from Foeldrygarn 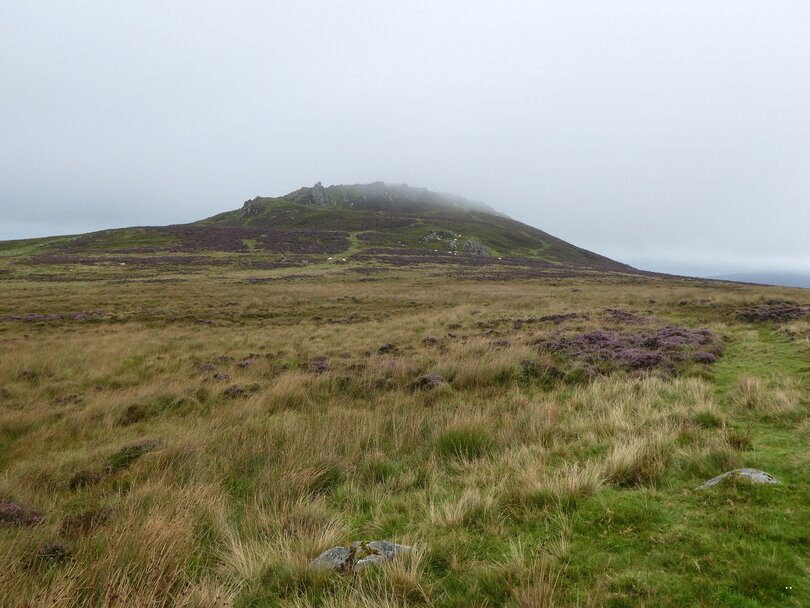 Looking back at the cloud still stubbornly hanging around Foeldrygarn 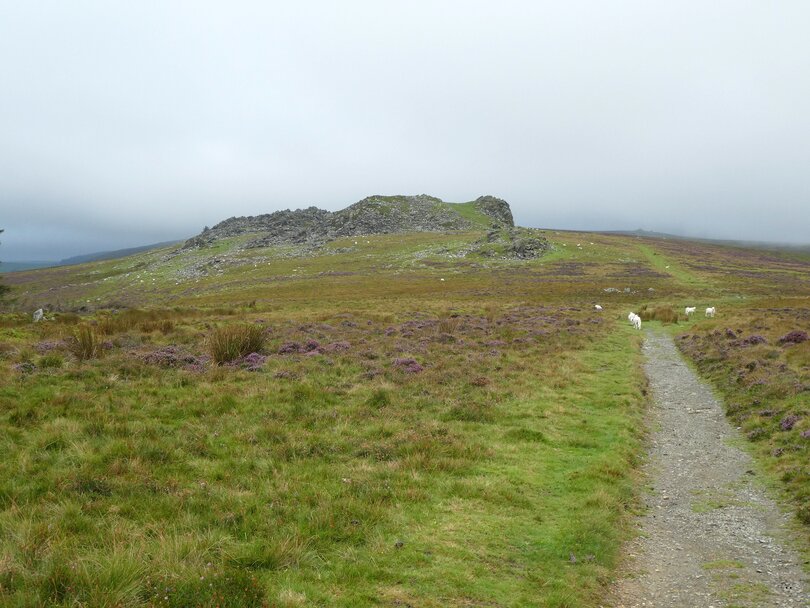 On the approach to Carn Gyfrwy 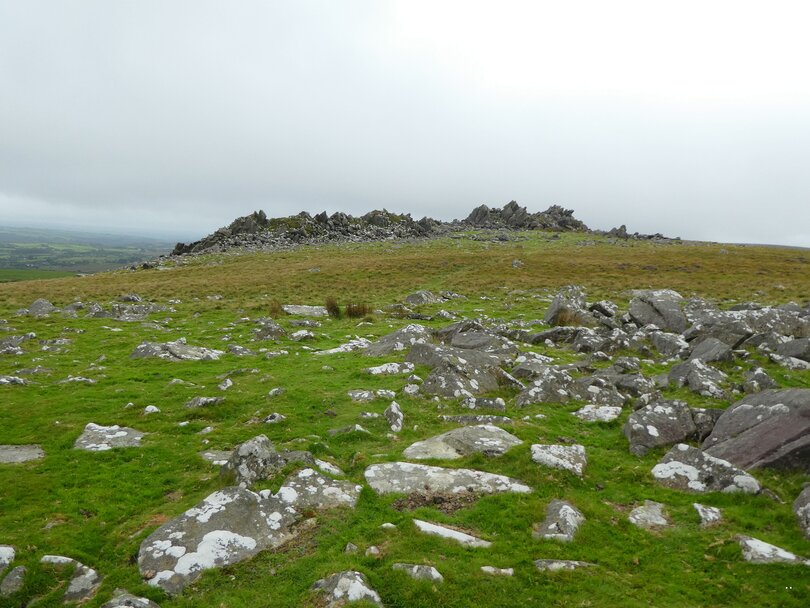 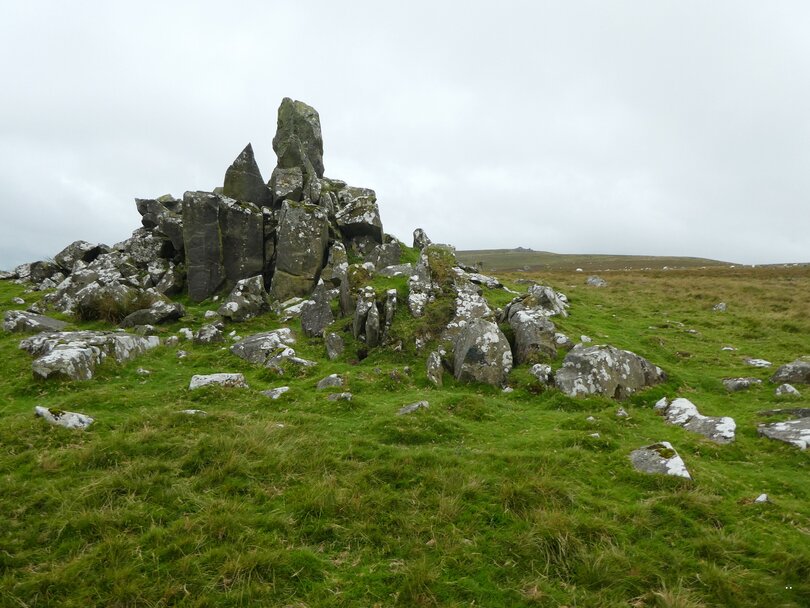 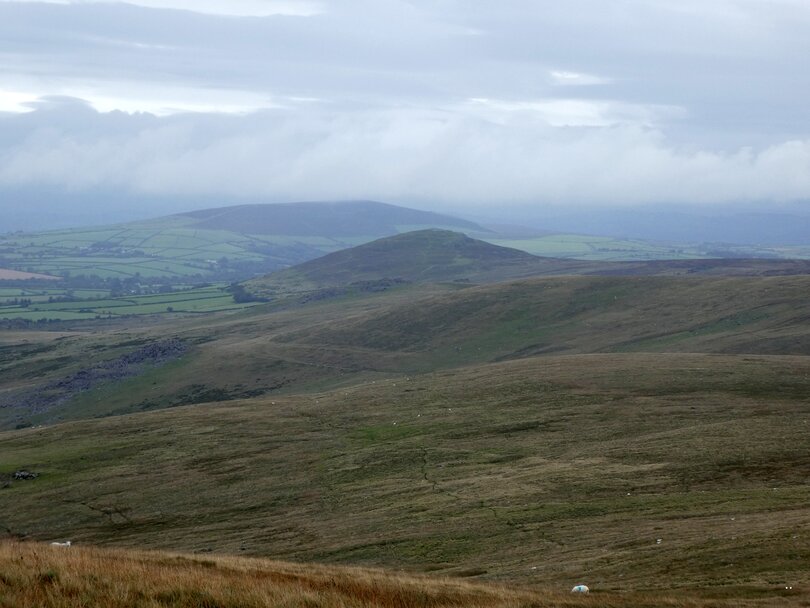 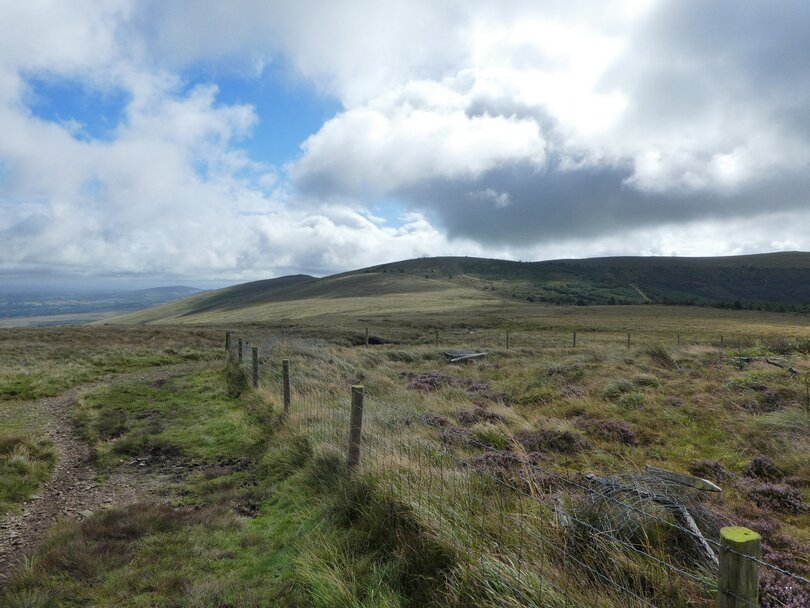 On the last unnamed hill before hitting the B road the view back to Pen Cisty & the ridge off right that I'd go on later to Foel Cwmcerwyn & with the clouds breaking. 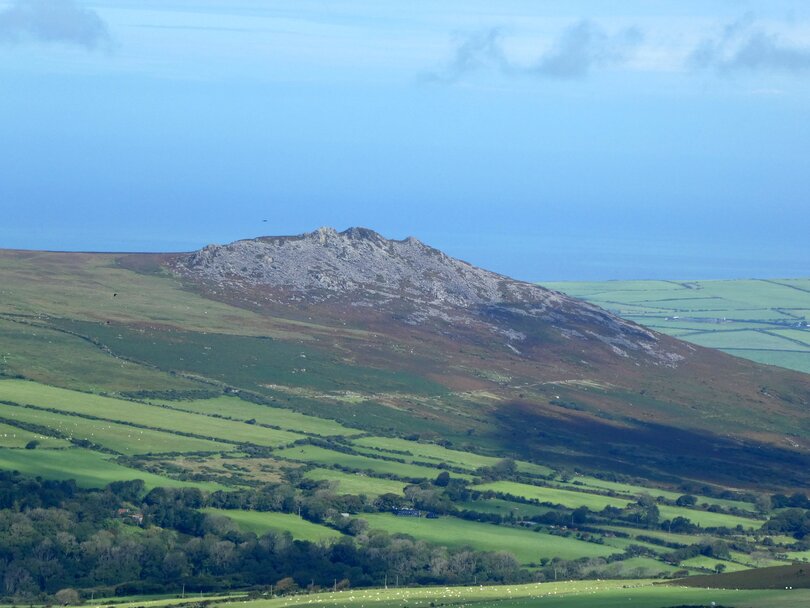 Having reached the view point of Cerrig Lladron & got some sun came multiple shots the 1st N to Carningli. 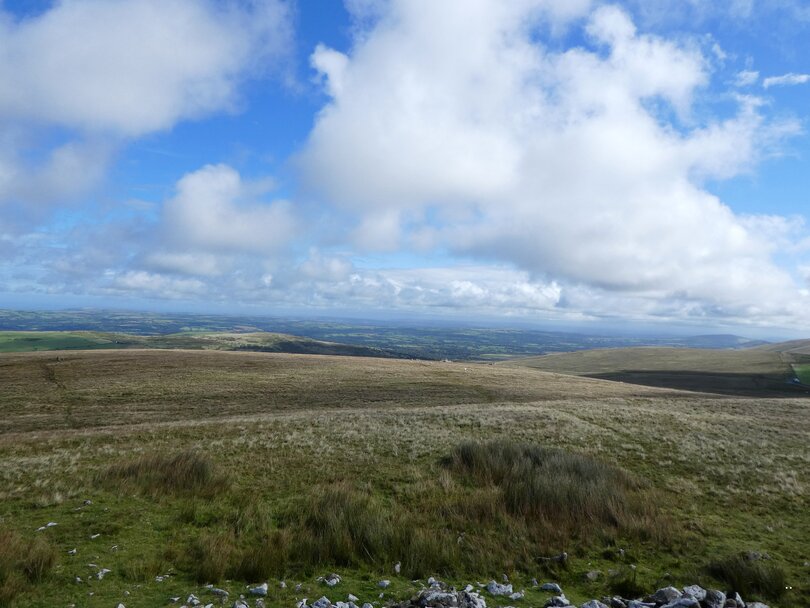 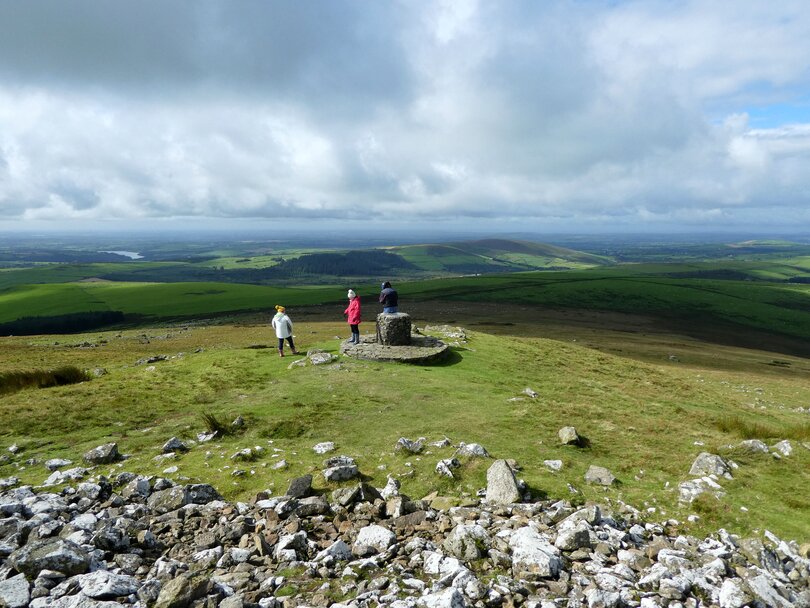 Looking SW over the view marker plinth to the landscape beyond 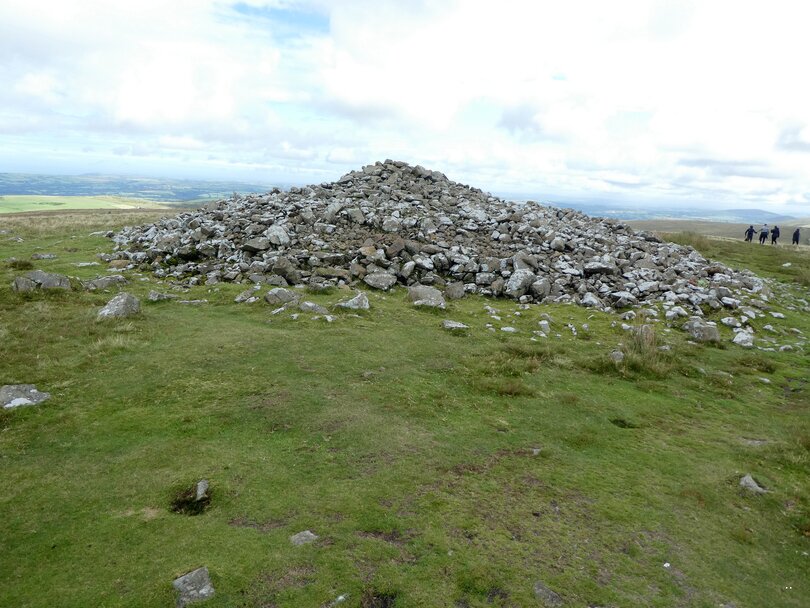 The burial cairn on the top 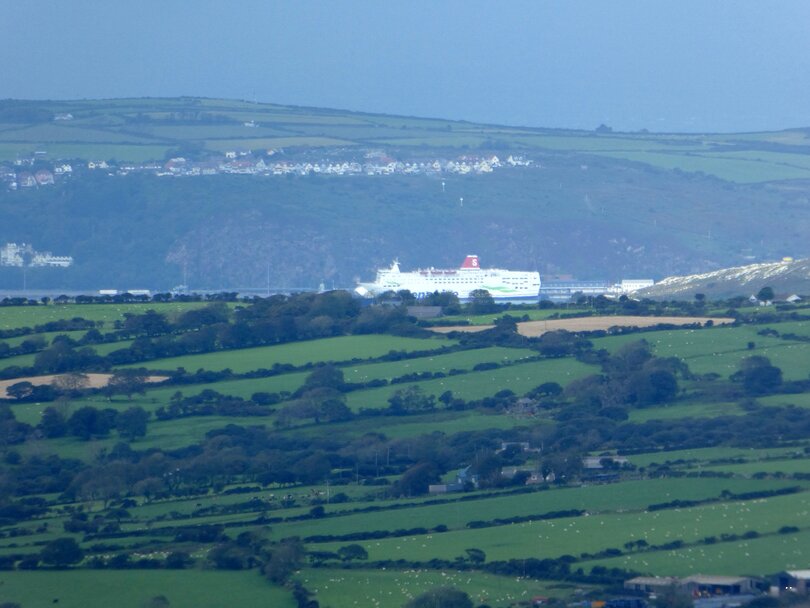 The ferry to Rosslare in Fishguard harbour 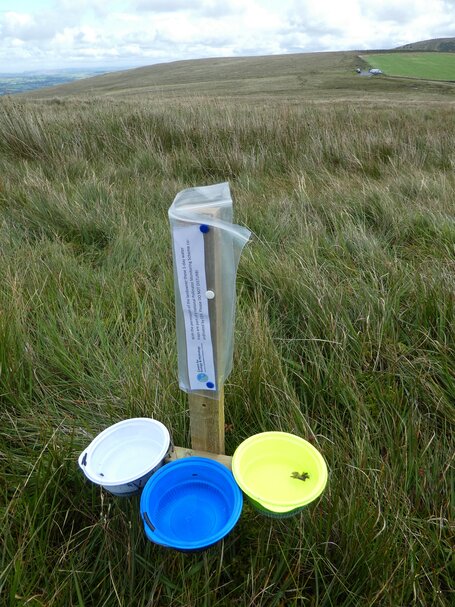 Having left the top of Cerig Lladron I was intrigued by this splash of colour a bit of the path, the label says it's a 1 day water trap, part of a national pollinator monitoring scheme. 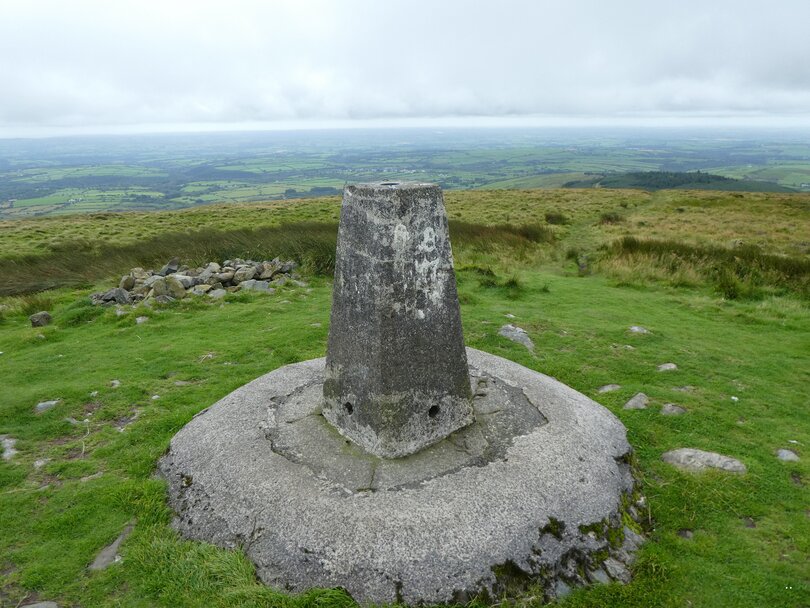 The trig pillar on top of Foel Cwmceryn the highest point in the Preseli's, it was also from this point that I caught the odd glimpse of the Bristol Chanel.

It was after this that things got harder 1st with a cut across off path, on access land through heather, rush & long grass to reach semi green grazed grass & back onto another public footpath by the forestry of Glynaeron. After a short road walk it was a matter of finding the unmarked footpath up Mynydd Bach it was going up this hill that I knowingly trespassed but with the good reason that the path crossed a field of dairy cows, but it wasn't them that were the problem but the electric fence, so I stuck to the track I was one & walked round the outside of the fence. 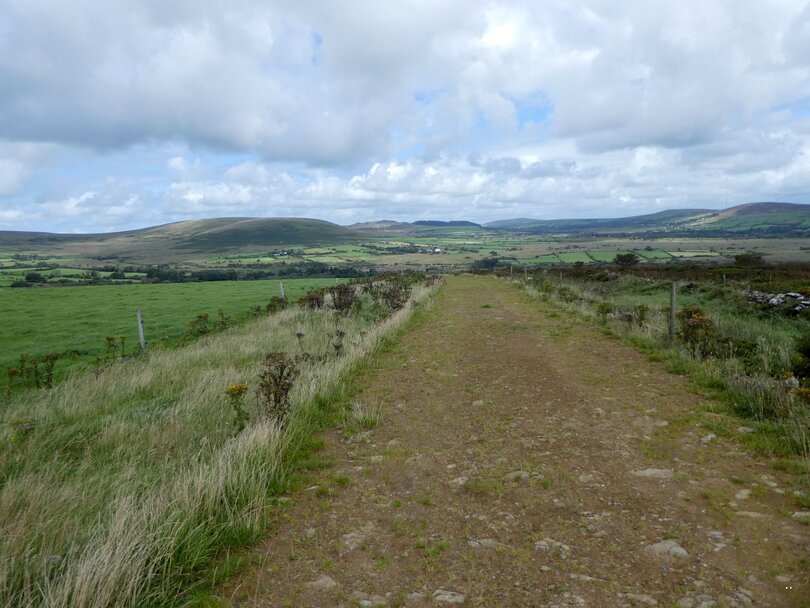 The view NE from atop Mynydd Bach

My next problem was as I was coming down the hill when the track I was on bent right but the path on the map/GPS went straight ahead seemingly straight through the hedge but as there was a slight gap in it, that's what I did which was right. 3rd obstacle was a slurry pit having gone down the drive of Ty-Canol the path on map went straight but no way was I going straight through a slurry bit uneven an unused one, so since someone was about at the house I asked for help & they said that it was the work of previous owner & they'd contacted the council who had officially closed the path because of that & what it lead onto (my 4th problem), although it was still on my brand new OS map & they helpfully directed me to another footpath, down the next drive along. Which is where I came upon these bridges side by side. 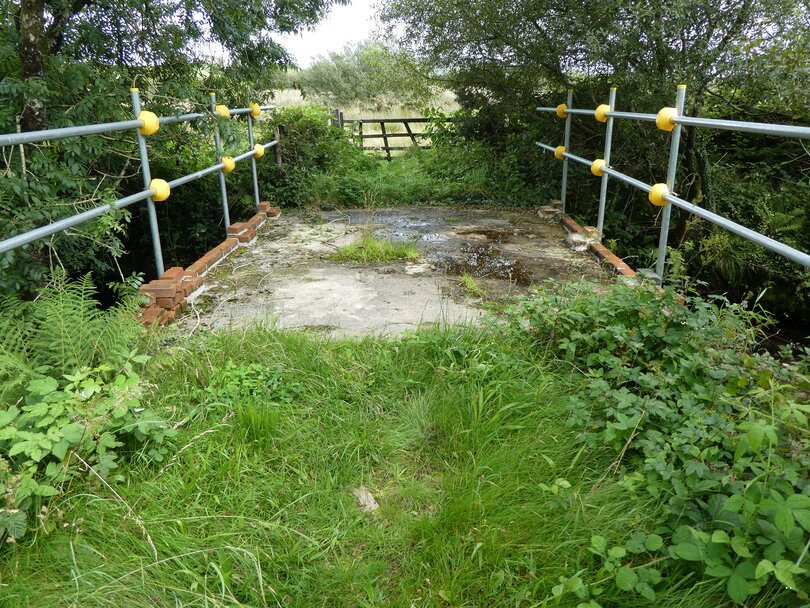 This is the one I crossed 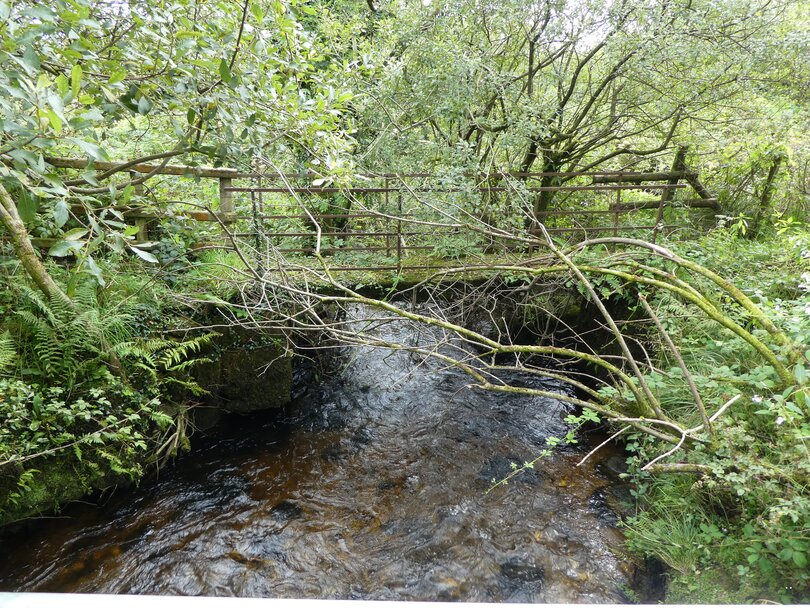 And this one a few yards downstream

It was what these opened out onto was my 4th problem, an extension west of Gors Fawr, of what I now know is bog / marsh - 3ft high clumpy rush & grass with foot sinking ground hidden under it & having tried multiple adavances & retreated I then followed the side of the stream upstream on firmer ground as I could see on map/gps that the width across to the green fields the other side narrowed & then crossed over & walked back down the other edge. My 5th problem was at Penralltfach Nature Reserve, were a notice on gate said bull in field, I didn't see the bull but plenty of evidence of it or other cattle having walked the narrow wet path & turned it into a muddy quagmire, to the extent that I used the stream I was walking besides in wood as a boot wash. For my next hill Foel Dyrch the footpath from the road was marked thankfully. 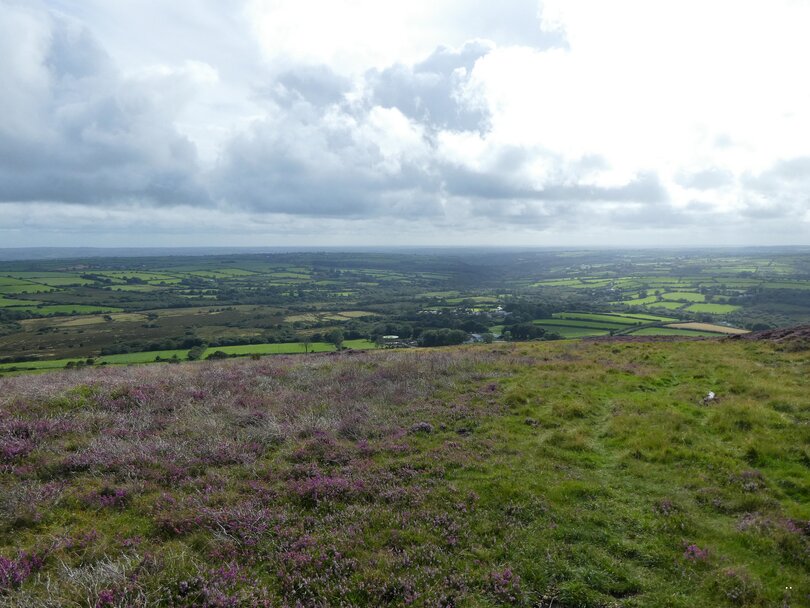 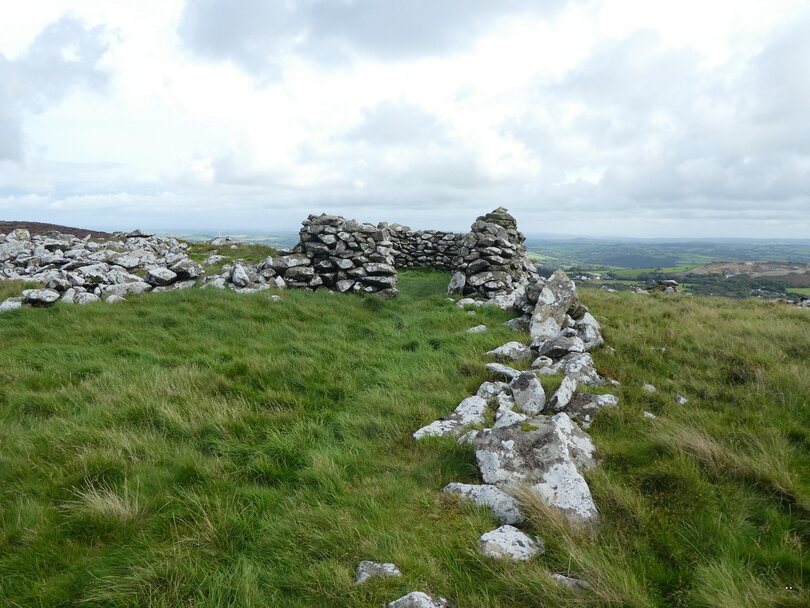 marked as a sheep atop Foel Dyrch, but 5ft high walls in places walls makes me question that. 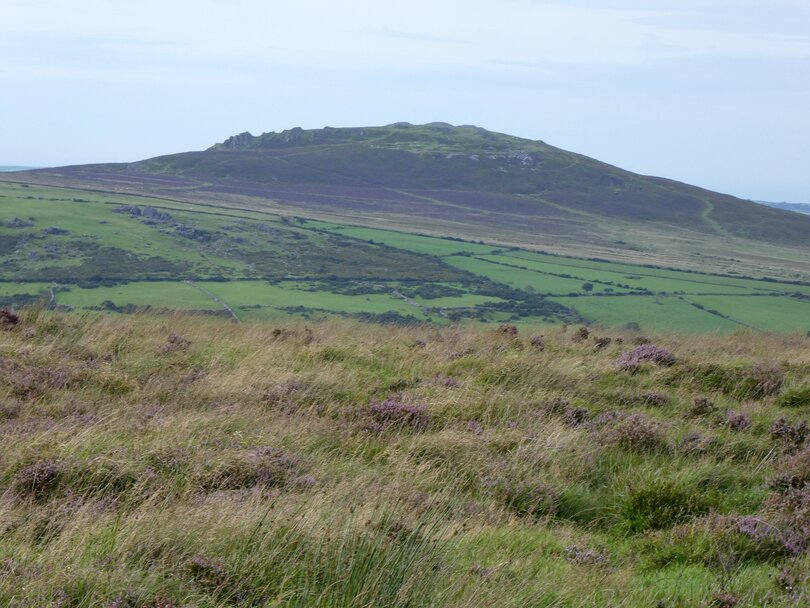 My hopes of reaching the path that ran down the NW ridge were dashed by a tall stone wall topped by barb wire so I just followed the blocking wall down in hopes of a gate but there wasn't & I ended up bending a bit more away from my line to exit the field via a gate onto the road. I had intended to also take in the last small hill of Crug-hr-hwtch but with tired & a bit sore feet & a heathery slope decided to stick to the grass & path that cut across it's lower slopes but I still had hard going from another cattle trodden into mud path but not as bad as the previous one. 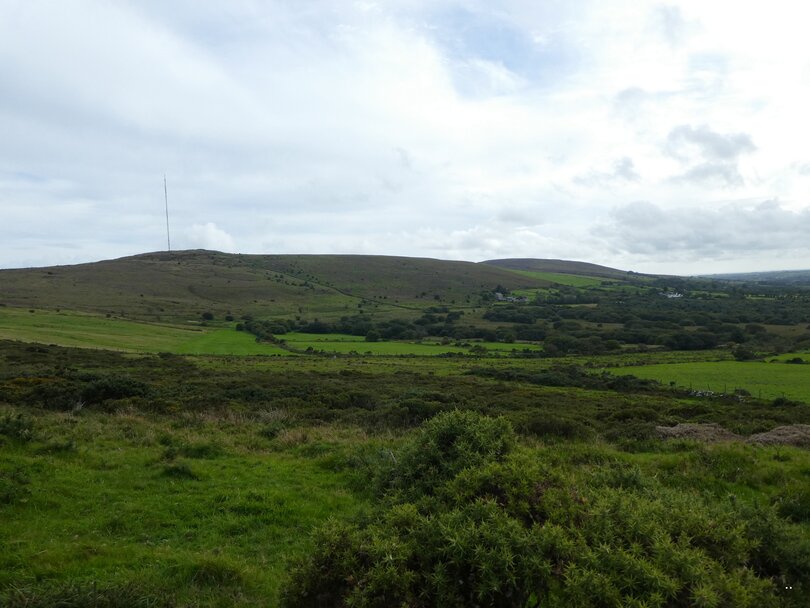 Just 0.8 of a mile from my start/end point looking back at my last 2 hills of the day Foel Dyrch & Crugiau Dwy with the transmitter mast that provided a point of reference quite often on the lower part of the walk.

So to summarise, I think my overall speed is partly down to lack of good views that make one stop & look. Also I think the magnet of the Preseli Hills mean that a lot of the lower land paths I went on were unfrequented & unsigned & anyone local would know what was bog & avoid it. The plus & minus side of the walk is that seeing Carningli & it's ridge has made me want to go & walk that sometime but it's added another to my accumulating list of walks.